Within DOXA’s lineup of tributes to its 1967-born icon, the SUB 300, the SUB 1500T poses the burning question none of us knew we were asking: What if it could go even deeper? Because one of the most self-sabotaging misnomers the watch industry has ever seen is this: the Doxa SUB 300T hints at only one-quarter of the truth. It can, in fact, go 1200 metres deep. The original SUB 300 (no T) from 1967 was thinner and was true to its name, but the 300T continues to sell itself short with its name. 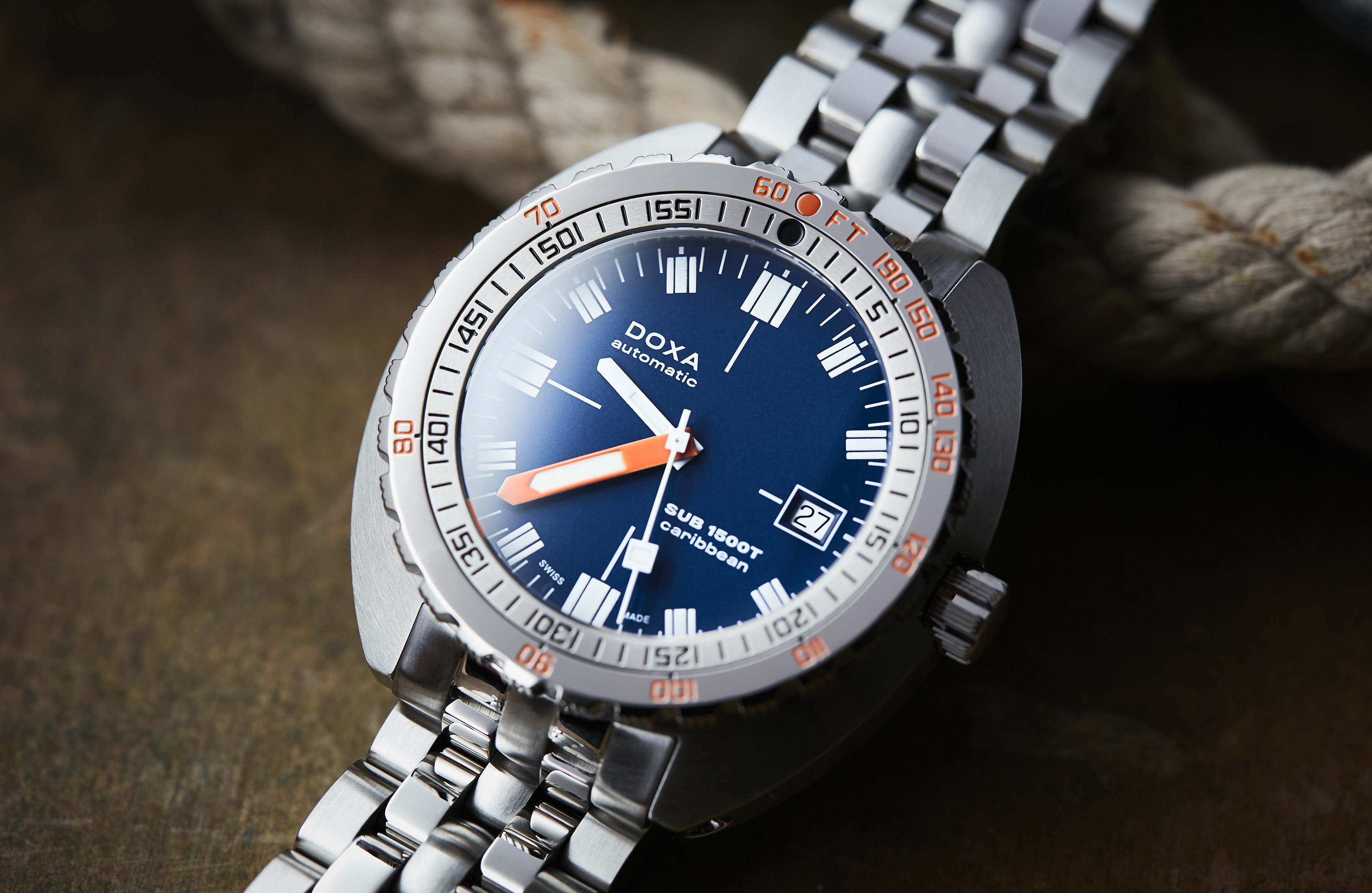 As as it turns out, not only can the 1500T exceed this monstrous depth by 300m, it can do so whilst capturing vintage charm and modern specifications. Without sacrifice, without cutting corners, DOXA have plunged even deeper into contention for being among the most over-engineered and potentially underpriced watches on the market. 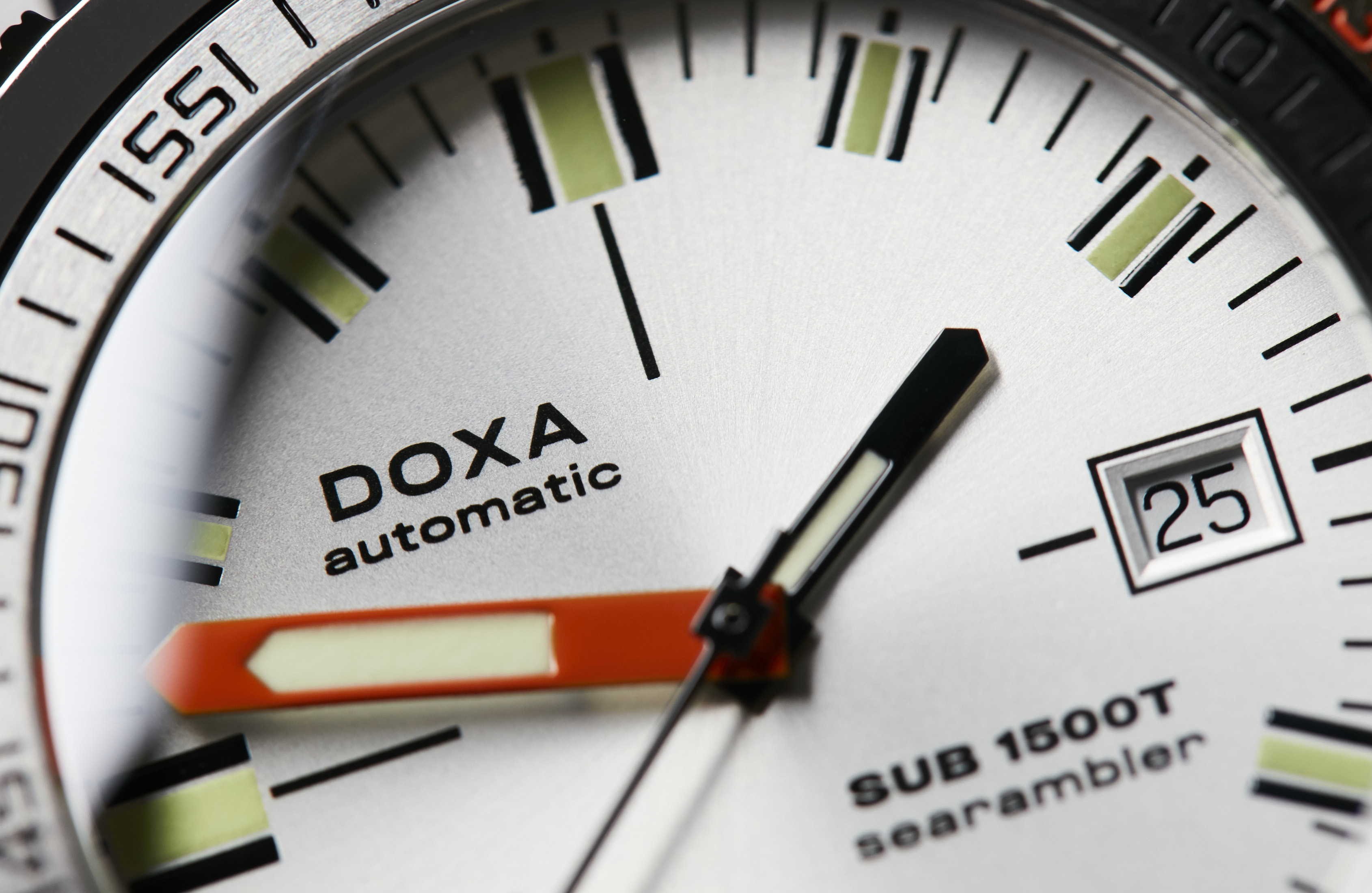 Photos of this watch just cannot do it justice. The ever-so-slight doming on the sapphire crystal leaves the watch perfectly clear when viewed from the front, but when tilted to a more common on-wrist angle, the warping is phenomenal. Because of the mostly flat approach to the dial, with printed rectangle indices and Super-LumiNova, the quality with which the face reflects through the crystal almost looks as though it is oil-filled, a technique that is becoming increasingly popular with the watch-modding community. Overall, the dial is a near-exact replica of the original SUB 300, from the shrunken seconds hand to the minimalist and legible approach. The asymmetric logo and text gives way to a crosshair, which makes it easy to grasp the alignment of the watch at a quick glance. One of DOXA’s unique traits is its variety of colours, all given their own nickname and printed on the dial. The iconic orange ‘Professional’ is hard to go past, but if you’re feeling adventurous then you could choose the tropical blue ‘Aquamarine’ or the summery yellow ‘Divingstar’. 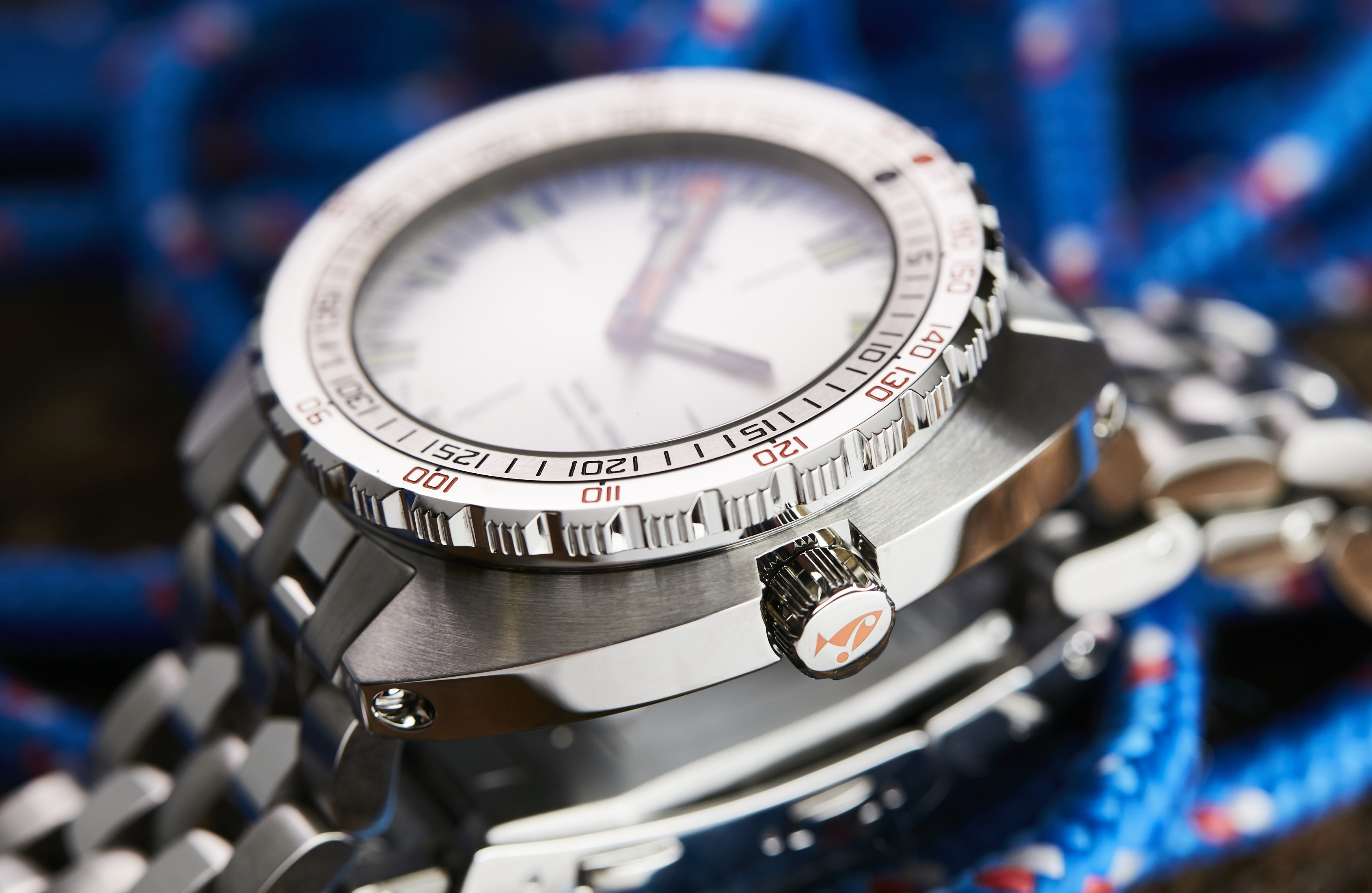 At 45mm in diameter and 16mm tall, the 1500T could probably be seen from space. The radially brushed cushion case slopes down to its polished sides from the bezel, which is actually only 42mm wide, giving it the appearance of a much more reasonable size. With a lug-to-lug spec of 47mm, it’s unlikely to overextend the average wrist. The large and fish-signed crown, being recessed into the case as opposed to having bulbous crown guards, is extraordinarily easy to grip and screw. As nice as a display caseback would be to see the DOXA decoration, the deeply engraved fish emblem is more than pleasant enough to look at for the sake of keeping that gargantuan 1500m water resistance. 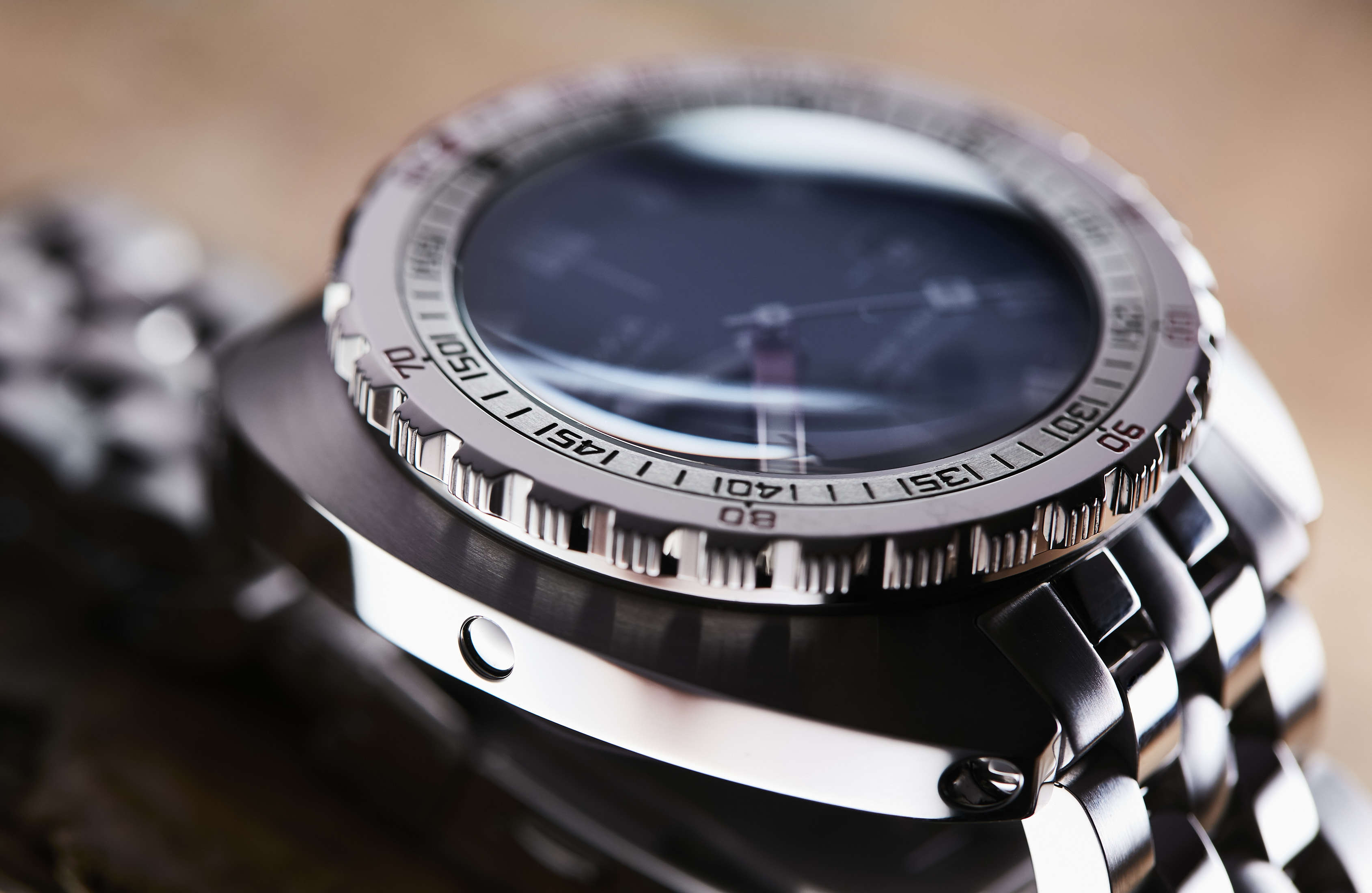 To call the bezel coin-edge would be a disservice to its gear-like protruding wedges of knurled steel. The DOXA doesn’t have grip so much as it has adhesion to fingers, which would make it a breeze to twist even if wearing wet and clumsy diving gloves. An inner brushed sector provides a traditional timing bezel with exact minute markets, while a dial-matched and polished outer ring displays the time it should take to decompress when diving at depth. Features such as these may not see use from the average dive watch enthusiast, but it just rams home the fact that this was designed for professionals. All this, without mentioning how good and snappy the feel of the clicks are. It’s easy to move, but has no backwards wiggle room at all. 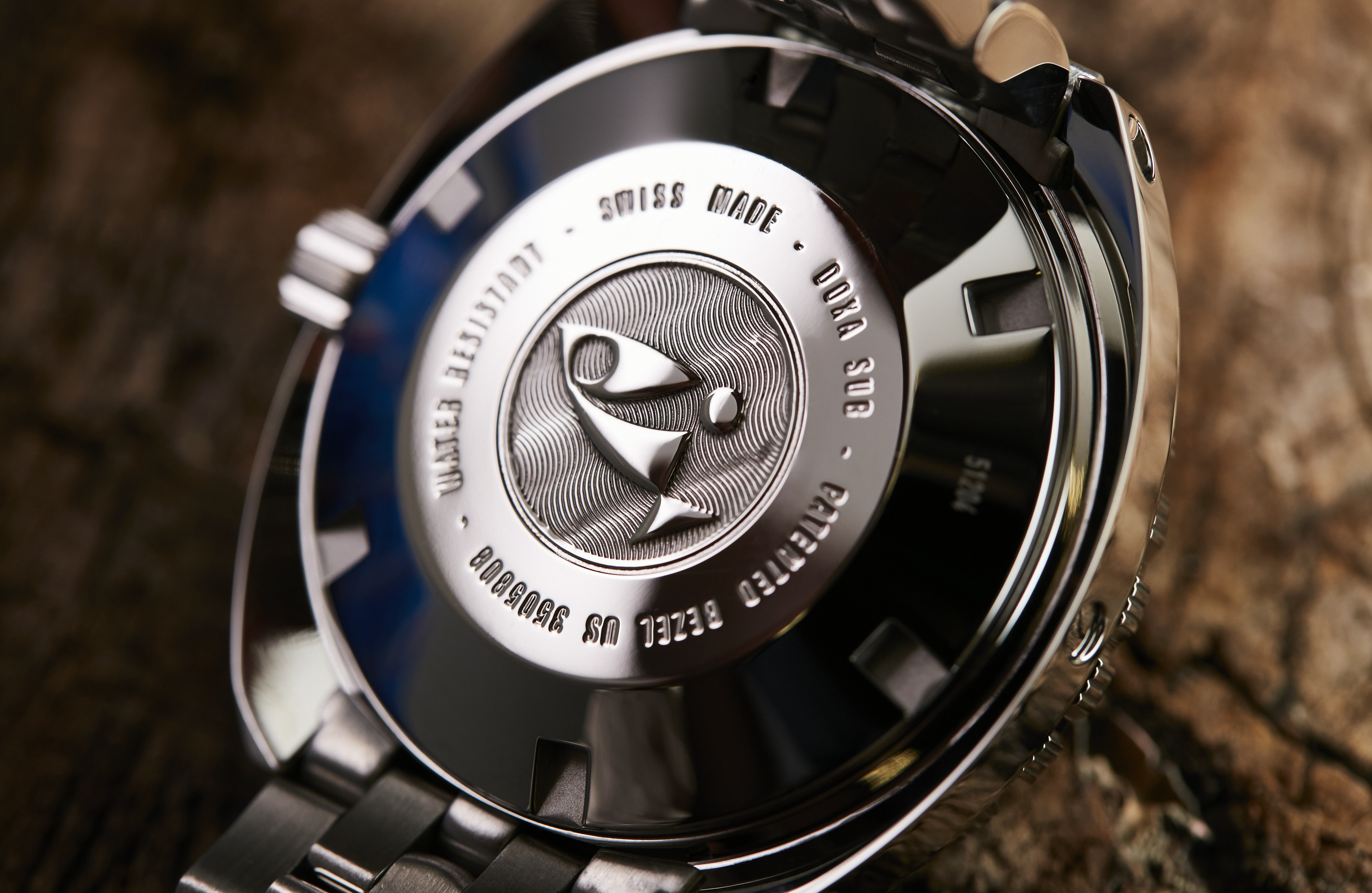 Oddly enough, this time-and-date behemoth is powered by a calibre renowned for its thinness and ability to have many complications affixed to it. The 21-jewel automatic ETA 2892-2 may not dazzle with a 28,800 vph rate and 42-hour power reserve, but it is extremely reliable, accurate and affordable to service. The thinness of the movement, too, must surely contribute to the 1500m water resistance, leaving more room for the thick sapphire crystal and caseback to seal it safely. 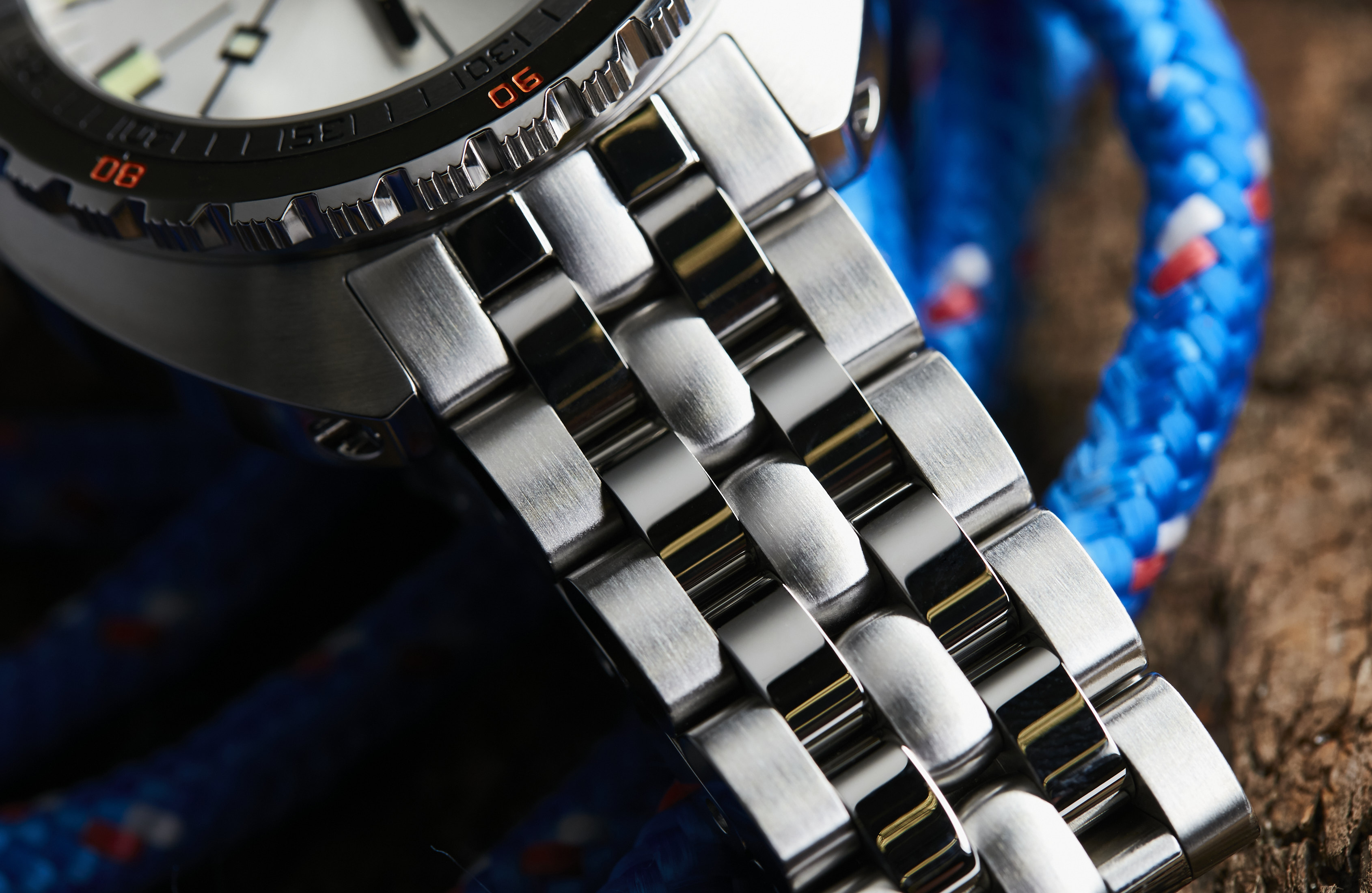 The chunky and straight-profiled 21mm steel bracelet is leagues ahead of competitors in its price range, even based on the clasp alone. The milled clasp is easy to open, and closes with a tight, satisfying snap, while the micro-adjustments are also solidly ratcheted for use with push buttons. This design, intended for adjusting without having to take the watch off, works splendidly for moving between cold offices and hot days and not needing to compromise the sizing. The solid-steel links are comfortable and don’t catch too much hair, and there are no worries of security with screwed end links as opposed to traditional spring bars. Also available are rubber straps to match the colour of your dial choice. 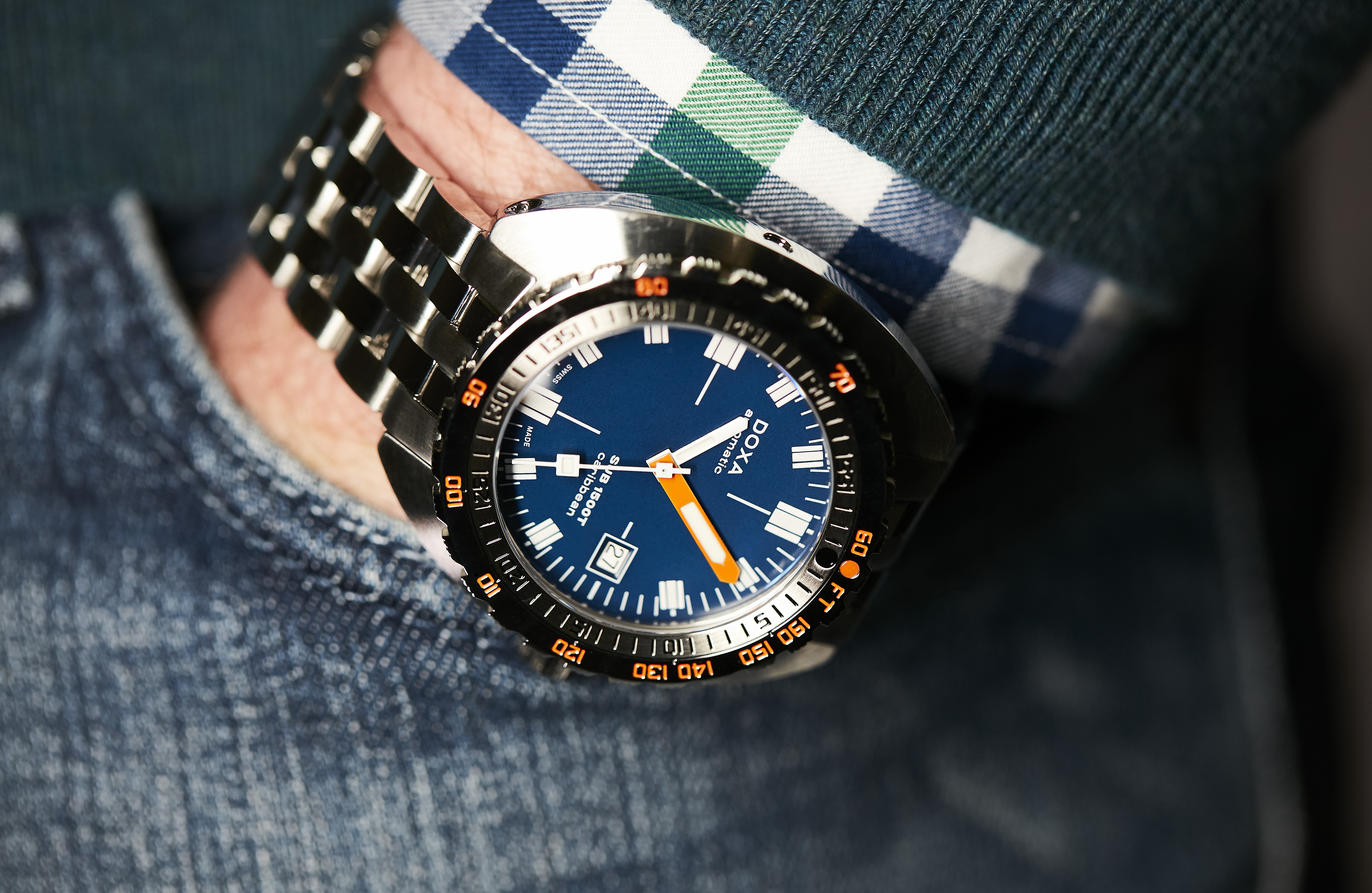 The most surprising thing about the monster size is just how well it fits on my relatively thin 17cm circumference wrist. Whether it’s due to the bezel being 3mm less wide than the edges of the case, the sparse dial, or the small lug-to-lug, the 1500T wears like a smaller watch than it is. That’s not to say it wears like a small watch, of course it carries a commanding wrist presence. Especially with the lighter colour options, the bold-contrast dial can stand out from the corner of one’s eye. It is substantially weighty too. If you had to punch a shark’s nose underwater, the DOXA may give your arm some extra momentum for added efficiency. 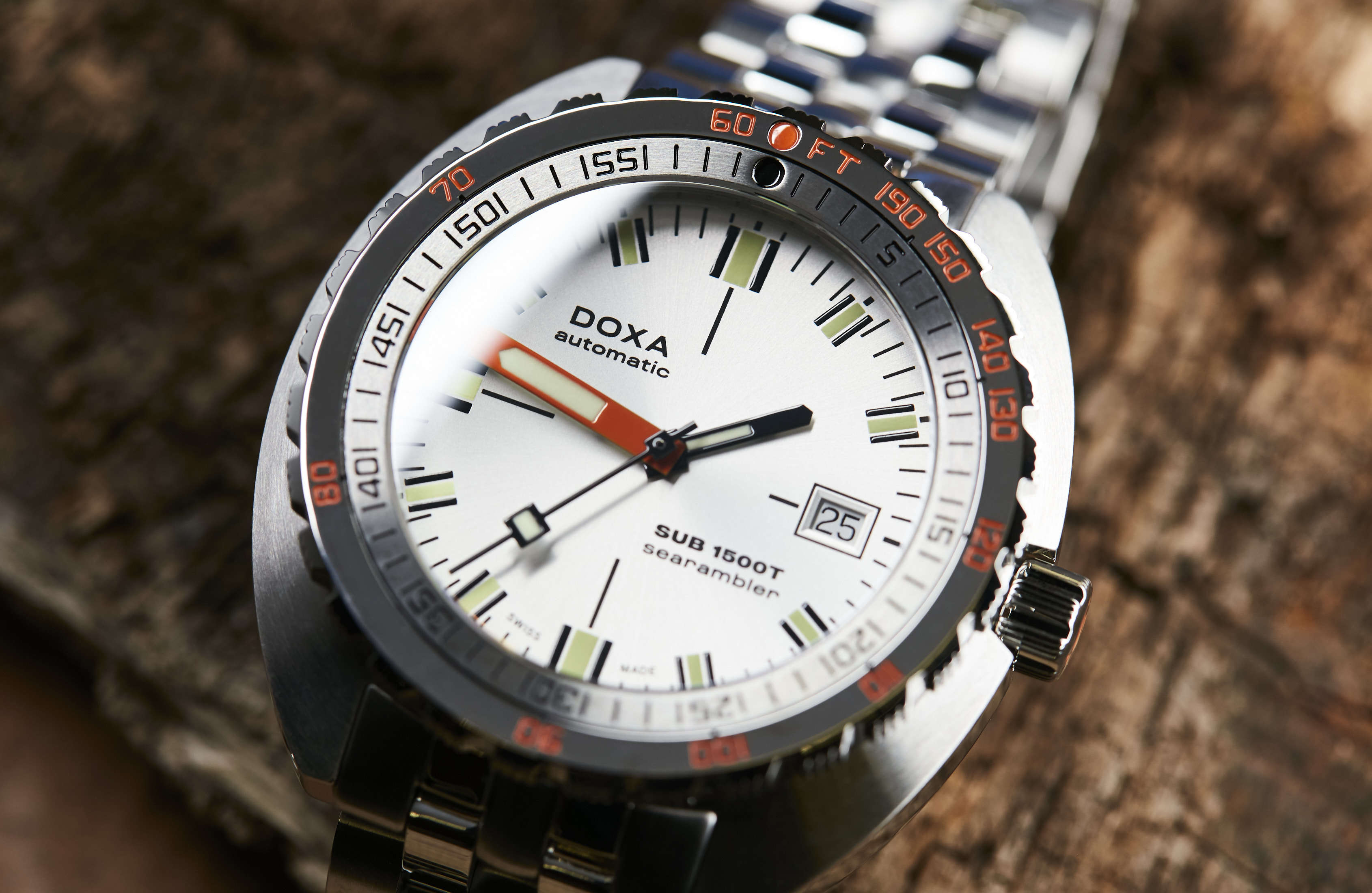 The DOXA Sub 1500T excels in celebrating function for the sake of function and, in doing so, the brand has constructed a tough-as-nails diver with quality and finishing to rival watches double its cost. 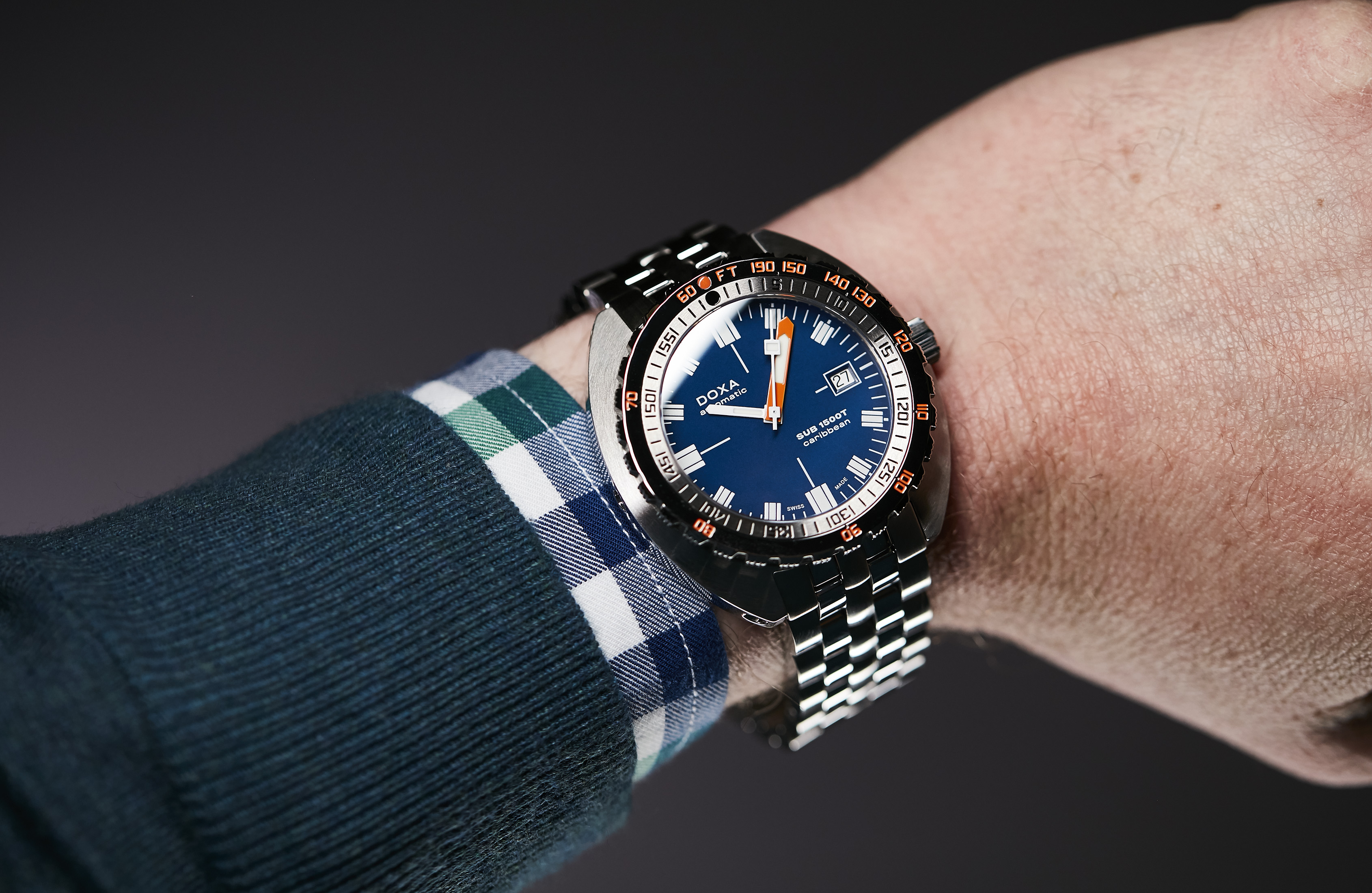 While professional saturation divers are the focal point for the Sub 1500T’s design, most of them are unlikely to be wearing anything other than the latest in dive-computing technology. Hardcore enthusiasts who adore the history of the brand and admire the engineering prowess will find perfection here, as too will casual wearers who want something characterful and swimmable. 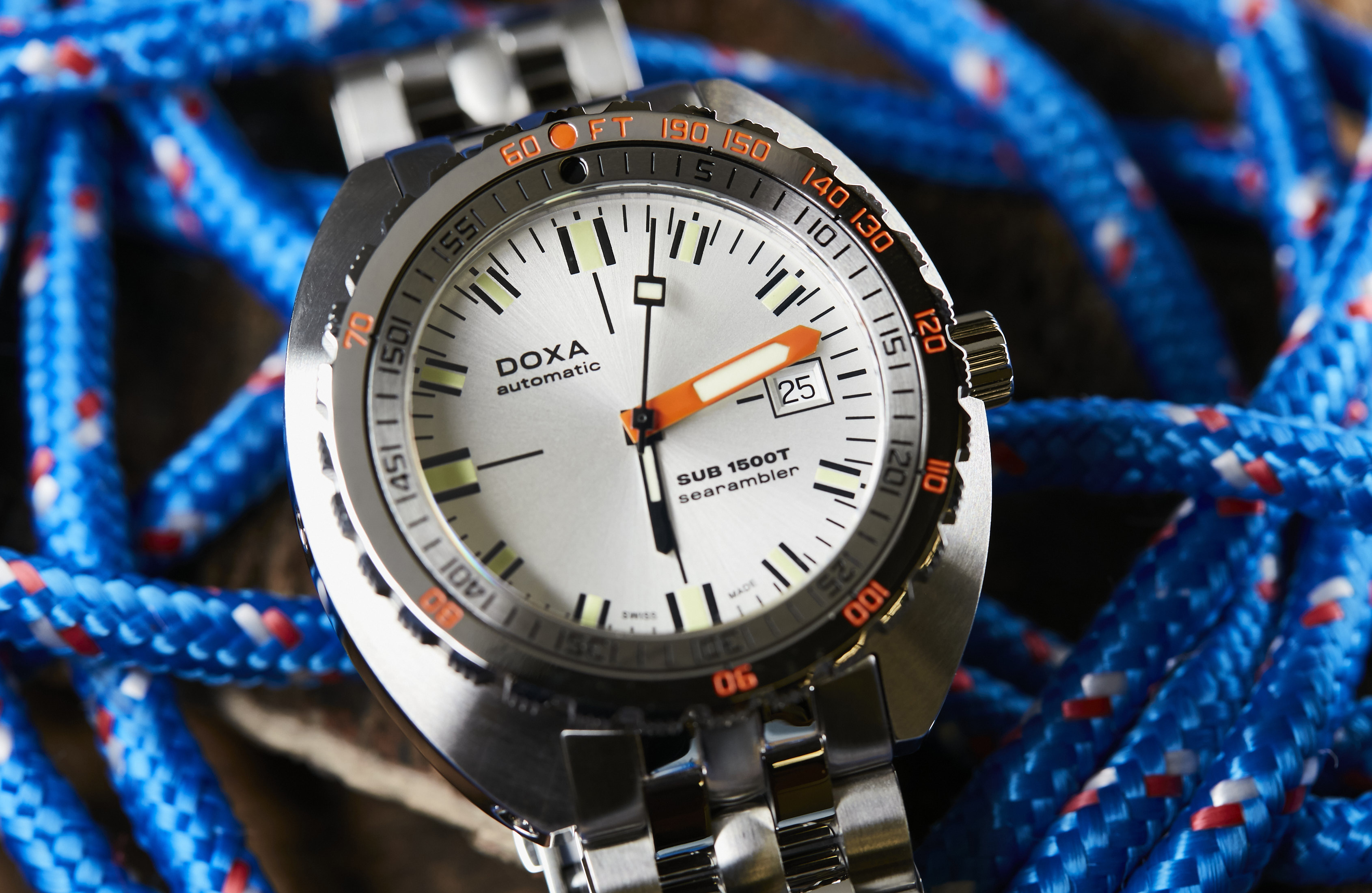 As with all odd-numbered lug widths, strap versatility can be a pain. Going to a more standard 22mm wouldn’t be unwelcome with such a large case, although the weight of the watch may be a little awkward on some flimsier NATO options.