Editor’s note: A little more than a year has come and gone since the new Jubilee Rolex Pepsi entered the world (and it’s since been joined by Batgirl), but the chances are good that you’re still waiting for yours — so how about another look at what’s still one of the most desired wrist accessories in the world right now. Take it away, Andy.

You’ve either been sleeping or taking a break from social media to have missed the news on this one. As part of their new Baselworld 2018 releases, Rolex have released for the very first time a ‘Pepsi’ GMT-Master II in ‘Oystersteel’ (which is the new Rolex terminology for their 904L steel). Yes, a two-colour red and blue Cerachrom bezel insert, WITH a Jubilee bracelet. 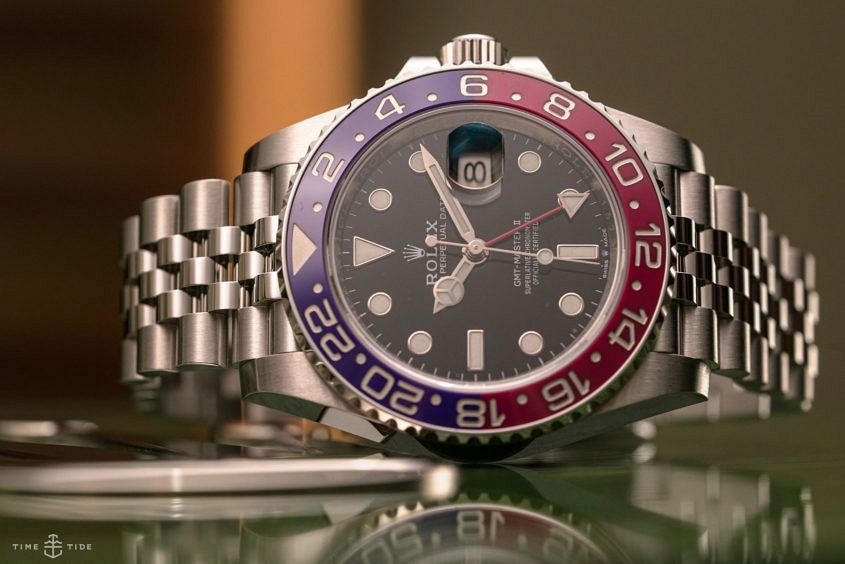 The five-link Jubilee bracelet is also made from Oystersteel and features an ‘Oysterclasp’, which allows for 5mm of adjustment. It’s also worth noting that this is the first time we’ve seen a Jubilee bracelet on a sports Rolex in modern times.

The Oystercase also received some changes and has been redesigned. It’s noticeably different in comparison to the GMT-Master II BLNR (Batman), which is also still in production. Aesthetics aside, the new Pepsi GMT also features an entirely new generation movement — the 3285 calibre, which features a beefed-up 70-hour power reserve. 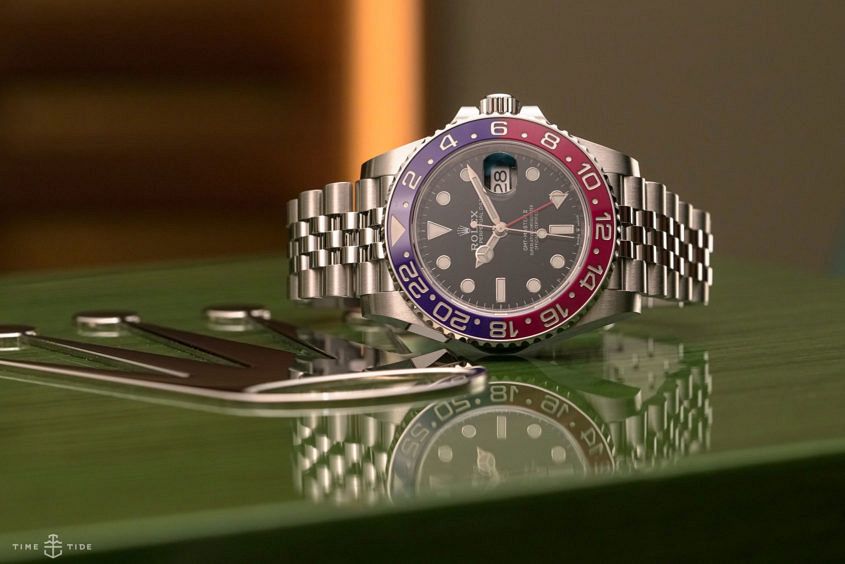 Another small, yet noteworthy detail is the additional Rolex crown on the dial, which you’ll notice at six o’clock, between ‘Swiss’ and ‘Made’. This appears to be on all new 2018 models. It’s small touches like these that help collectors distinguish between different references at a glance, and are often used historically as markers of a transitional period. 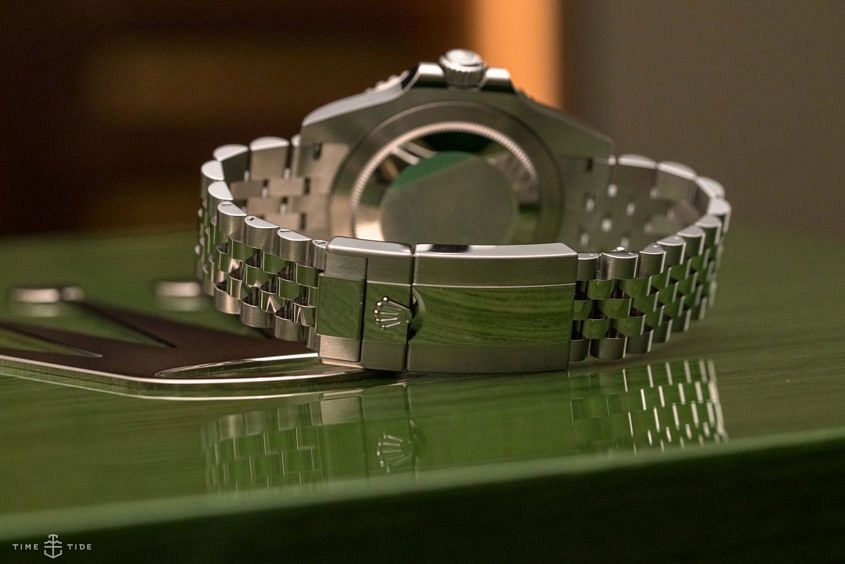 Rumours were going wild as to exactly what GMT configuration we’d see from Rolex this year, and really went crazy when teaser videos showing the makings of a Jubilee bracelet were released. Generally, I think it’s safe to say the watch community has been crying out for another steel GMT with either the Coke (a black and red insert) or Pepsi bezel inserts. Although Rolex offered the Pepsi bezel in white gold, the price of entry was far too high. 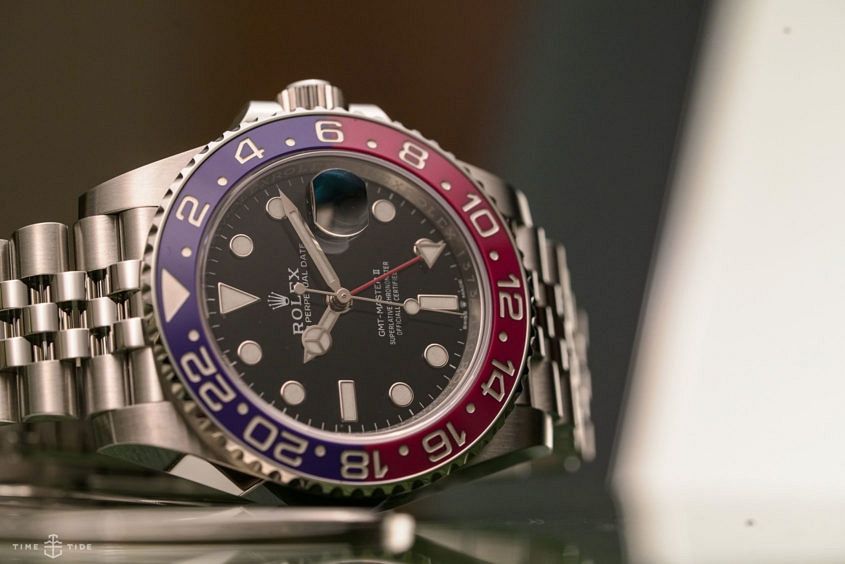 If early feedback from the public is anything to go by, then the Pepsi is a hit. It’s obvious that a lot of work has gone into the design and execution of the Pepsi — Rolex put in a lot of effort when creating this vintage-inspired piece. In fact, this particular model has 10 patents, from the clasp to the movement. 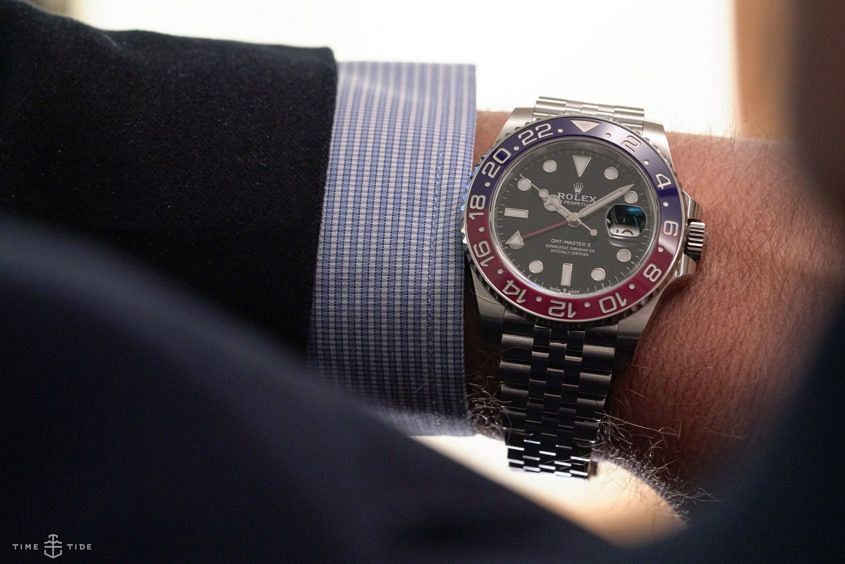 After giving this watch some wrist time, I’m a big fan. The redesigned case feels fantastic, the Pepsi bezel pops, and the Jubilee bracelet strikes a beautiful balance between sportiness and elegance. Overall, the GMT-Master II has some excellent substance to it and feels lighter than the GMT and Submariners models (likely due to a weight difference between Oyster and Jubilee bracelets).  It’s also incredibly comfortable, with the Jubilee bracelet almost draping down your wrist. And from a practicality perspective, I’m happy to see an increased power reserve in the new 3285 Calibre (up from 48 hours on the previous GMT model).

Aesthetically, the Pepsi has a whole lot going for it, and I think it’s a well-balanced combination of modern robustness and vintage charm.

It might be a little early to make the call, but I can see this as easily being one of the hottest pieces of 2018.

The vintage guy who grew up loving the classic GMT, but wants something he can wear on the daily.

The new movement was a very pleasant surprise.