TAG Heuer has beefed up its popular Aquaracer GMT lineup with their latest release – the TAG Heuer Aquaracer GMT Ref. WAY201T.BA0927. And is it just us or is that ‘WAY’ in the title sent to trigger a subtle reference to you know who? If that’s the intention, there are many interesting details this Aquaracer brings to Wayne Manor. 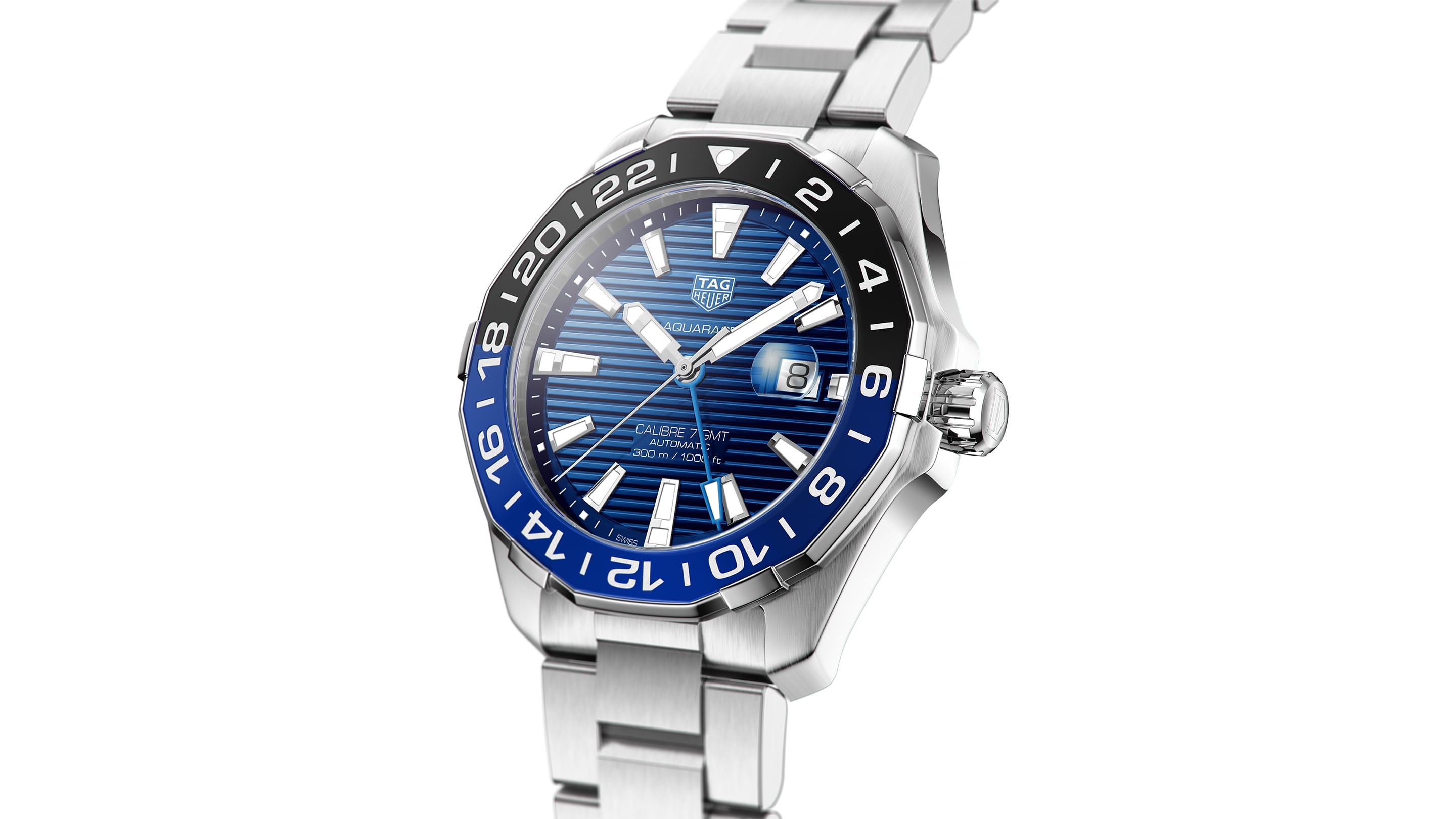 Similar to its red and blue brethren, which was unveiled in 2017, this new Aquaracer has got a lot going for it, so let’s walk you through the salient specs. The size of the stainless steel case, which features both brushed and polished elements, has remained unchanged at a beefy 43mm across, making it substantially bigger on the wrist – 3mm to be exact – than the obvious comparison watch in the same colour way, the Rolex GMT-Master II BLNR. 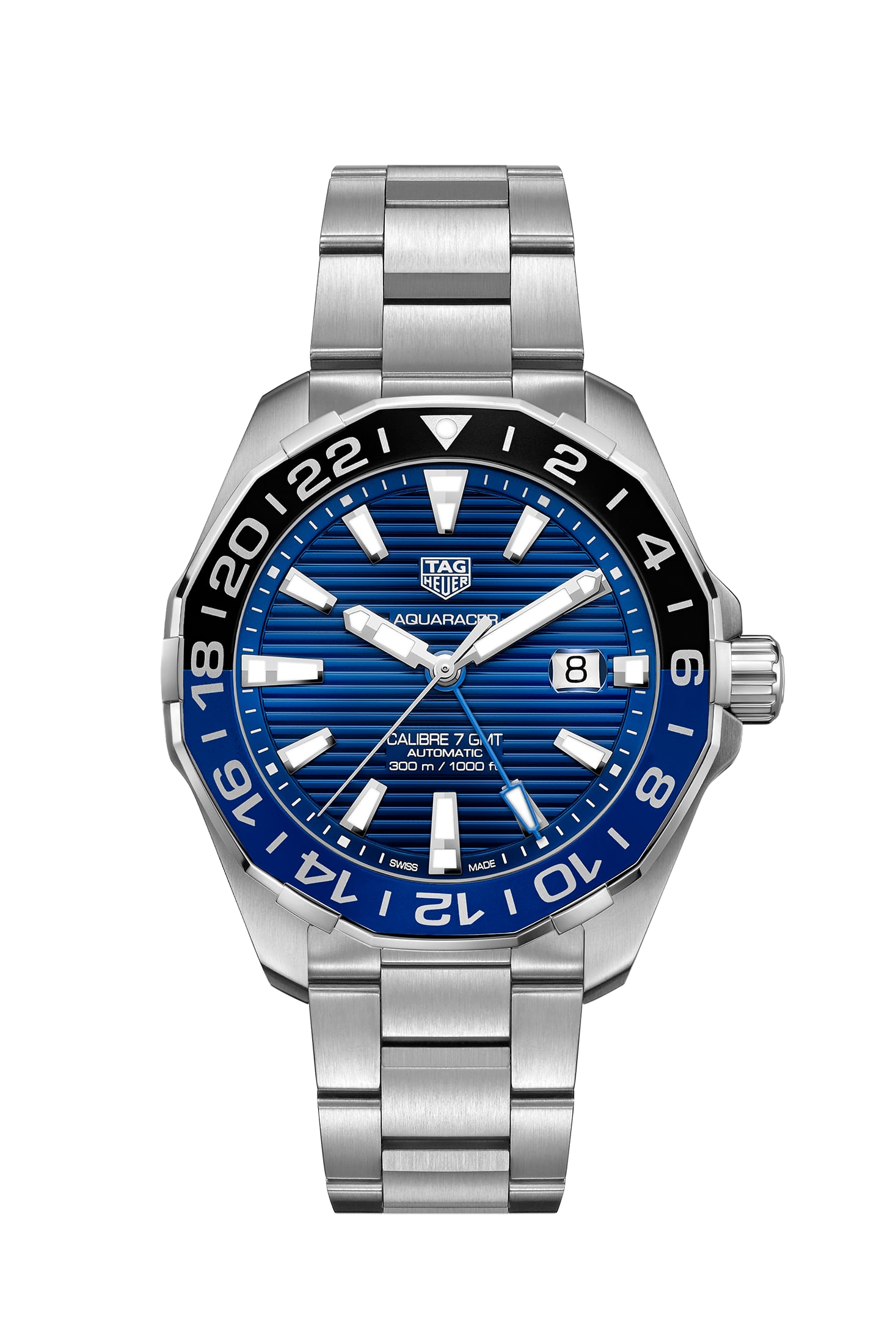 Sitting atop the case is the watch’s new aluminium unidirectional rotating bezel, which sees the top half painted a deep black, to indicate nighttime, and the bottom half painted a handsome blue, which represents daytime. Just as before, this Aquaracer features an impressive 300 metres of water resistance, thanks largely to a screw-down crown and screw-down caseback. 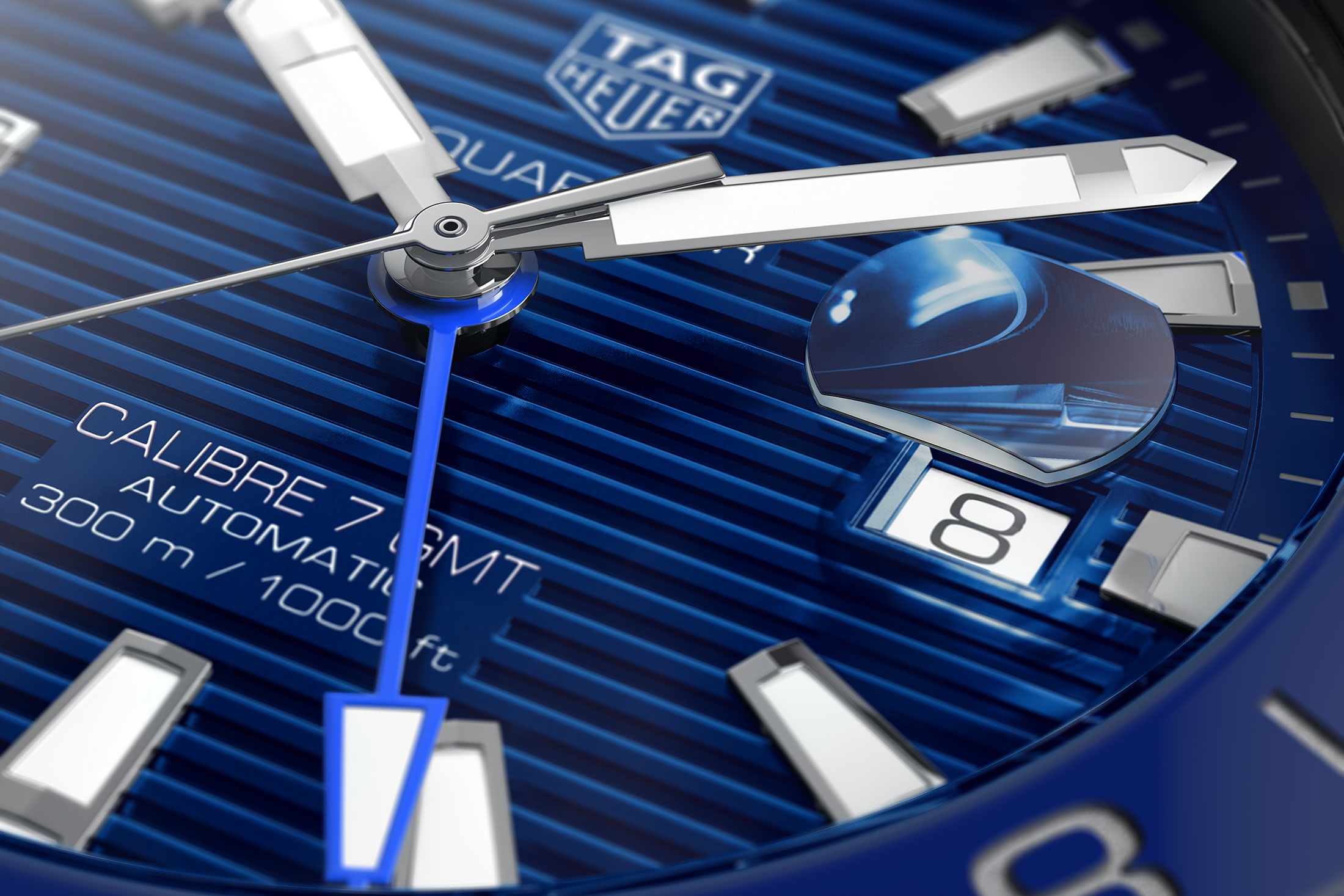 The dial of the watch has come up a real treat, with the horizontally lined pattern finished in a striking sunray brushed blue that gives plenty for the eye to dine on in different lighting conditions. Speaking of lights, when they all go off, this joker has a trick up its sleeve – dual-coloured Super-LumiNova. These are small details, but as we know, in details lies a lot of the intrigue that can hook us in. A simple white minute track adorns the edge of the dial. The chunky angular Aquaracer hour indices, as well as the handset and centring arrow on the bezel are also in a nice crisp polar white. That is, as we said, till its nighty night, then there’s a bit of a light show to enjoy …

Speaking of lights, when they all go off, this joker has a trick up its sleeve – dual-coloured Super-LumiNova. These are small details, but as we know, in details lies a lot of the intrigue that can hook us in. 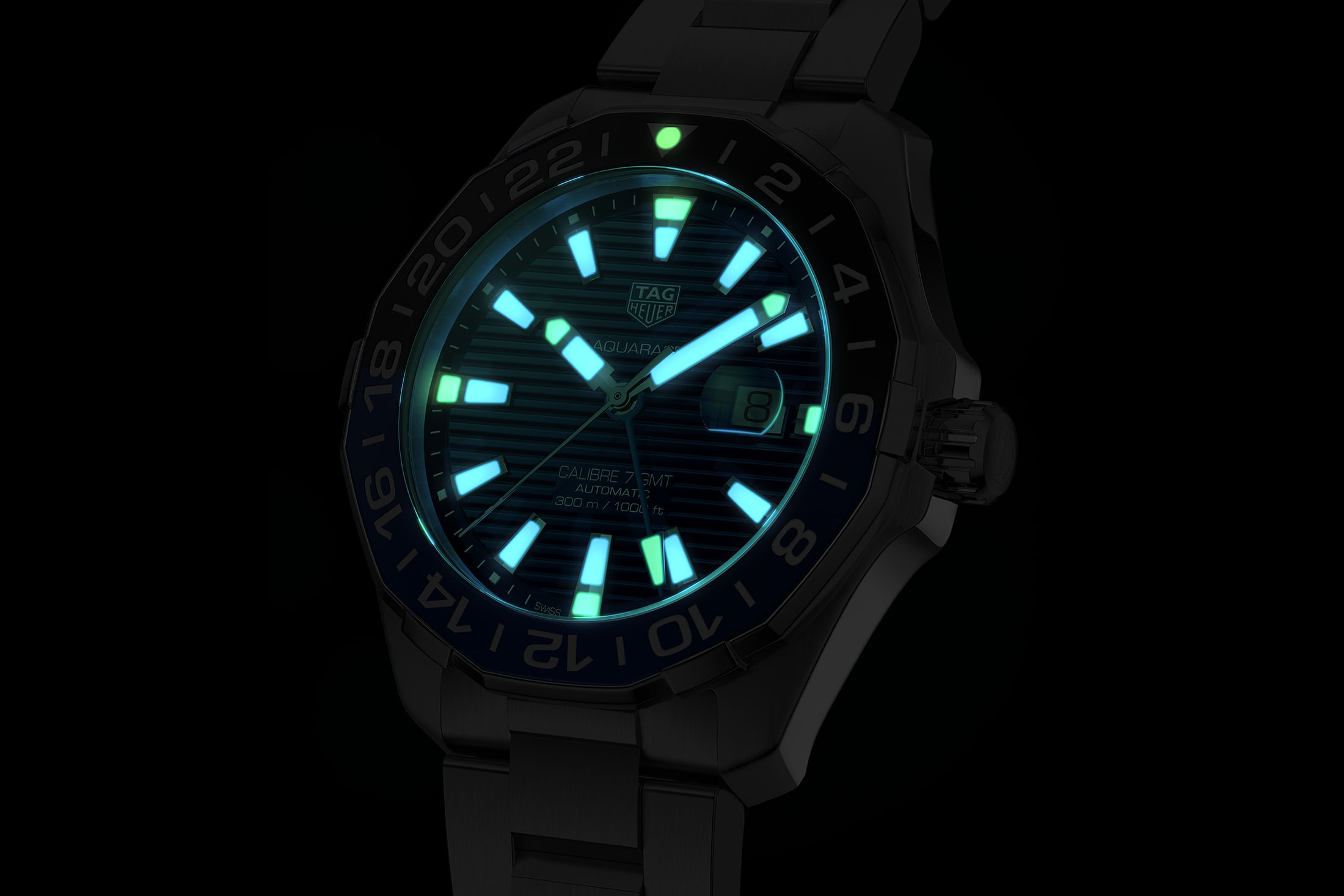 Behind the attractive dial, this new Aquaracer employs the same in-house Calibre 7 movement as its red and blue counterpart, and offers features that include a GMT complication, date complication, self-winding, an operating frequency of 28,800 vph and 46 hours of power reserve. The dual-zone diver is paired with TAG Heuer’s well-known tri-link stainless steel bracelet with deployant clasp, which certainly adds to the watch’s rugged and robust appearance. 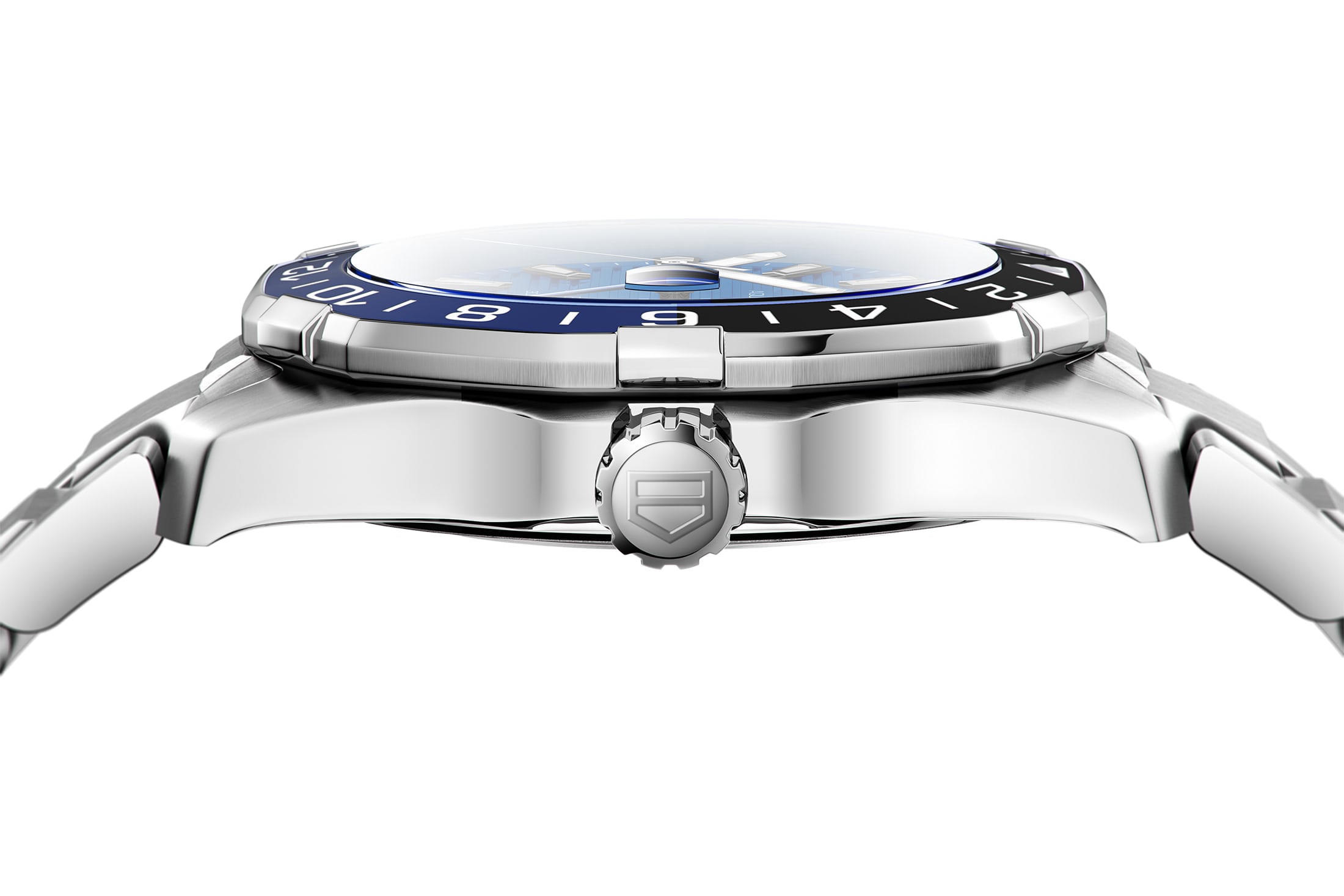 Curiously, the price of this new Aquaracer is $4450 AUD … that’s $500 more than the red and blue iteration. But hey, it’s been three years. And we all know about that Batman premium …

Of course, the rather large black and blue elephant in the room is of course – like we said above – playing a similar ‘na na na na na na na na’ tune to a very famous steel sports model. But, hey, if you think there’s only Batman, you’d better check this story out. Turns out a bat by most names still looks as badass.