IN DEPTH: The Tudor Black Bay Fifty-Eight Vs. Seiko Prospex SPB147J – the battle of gilty pleasures

If a watch has become synonymous with the One Watch Collection, a quintessential vintage diver, or the perfect Sub reissue Rolex never released, it’s the Tudor Black Bay Fifty-Eight. In fact, care of the recent navy blue update, it’s currently as viral as the AD waiting lists are long. Personally, I love vintage tool watches, and especially the quiet bling that a warm touch of gold brings to the party. But can we find alternatives in the same perfect 38-40mm size from another big box brand?

Yes, we can — from Seiko, well known for their brilliant vintage reissues, but also for being large. Ergonomically superb they may be, but with the different tastes of the Asian and US markets (in HK the BB58 is being marketed as a ladies’ watch), still predominantly large chunks of 42-44mm steel. This changed with the recent release of the 40.5mm SPB143-147 and SPB149 Vintage Diver Re-creation trio. Still on the chubby side height-wise, but at a third of the price of the Black Bay Fifty-Eight, is the SPB147J the gilt champ? The fighters enter the arena … 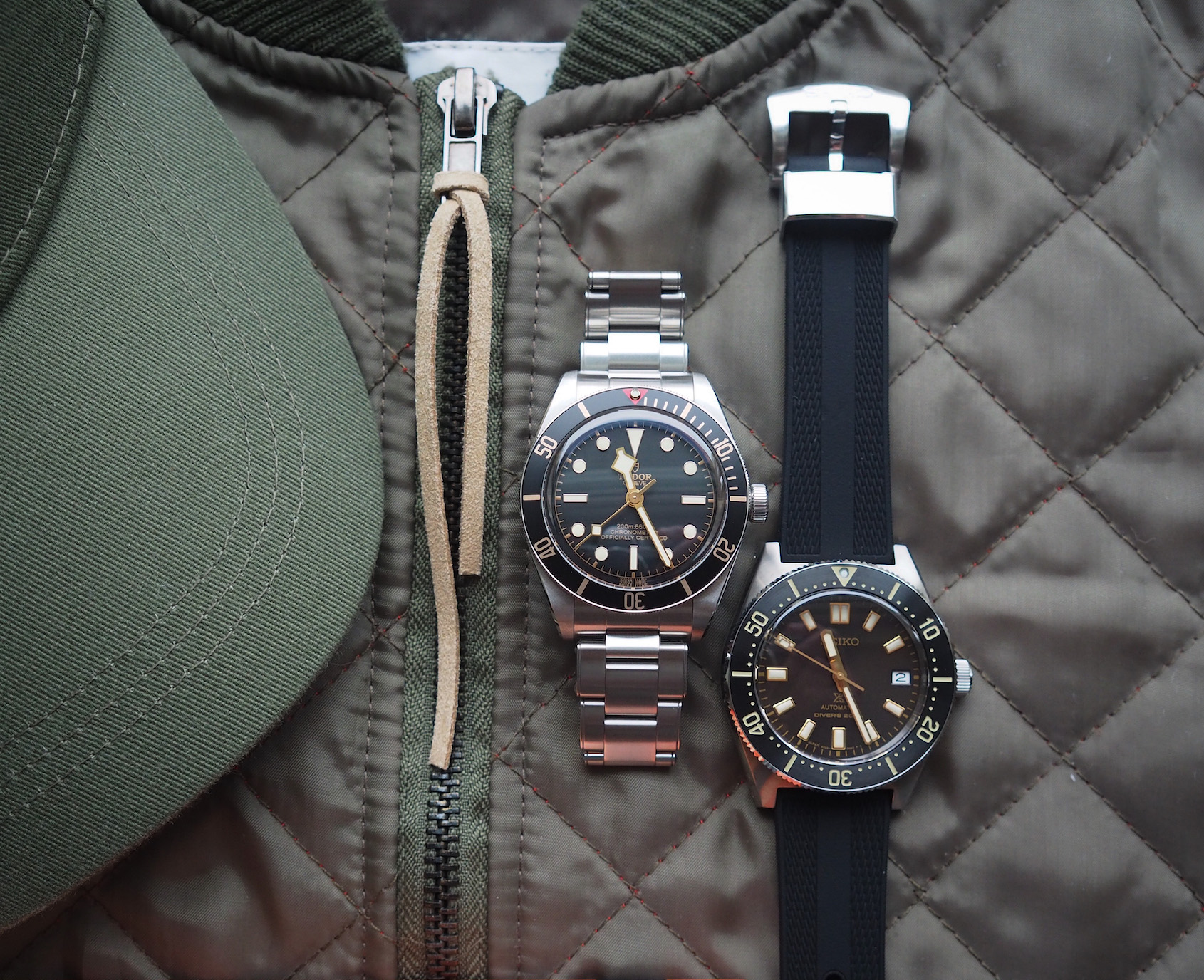 A duel of cases

The comfort prize is won by the Black Bay Fifty-Eight, by simple virtue of the slim 11.9mm height combined with the best feature of any comfortable watch — an unobtrusive and thin caseback with downturned lugs. The result is a smooth fit to the wrist, no matter which strap or bracelet.

The sides are slab-straight with a slim bevel on top. The finish is superb, but the expanse of polished sides is very susceptible to hairlines and scratches and not overly exciting. The minutely brushed top and pointed lugs beautifully underline the Rolex family quality, save for one detail: the ends of the lugs are sharply defined a bit too literally, and would be better with a slight rounding or bevel. 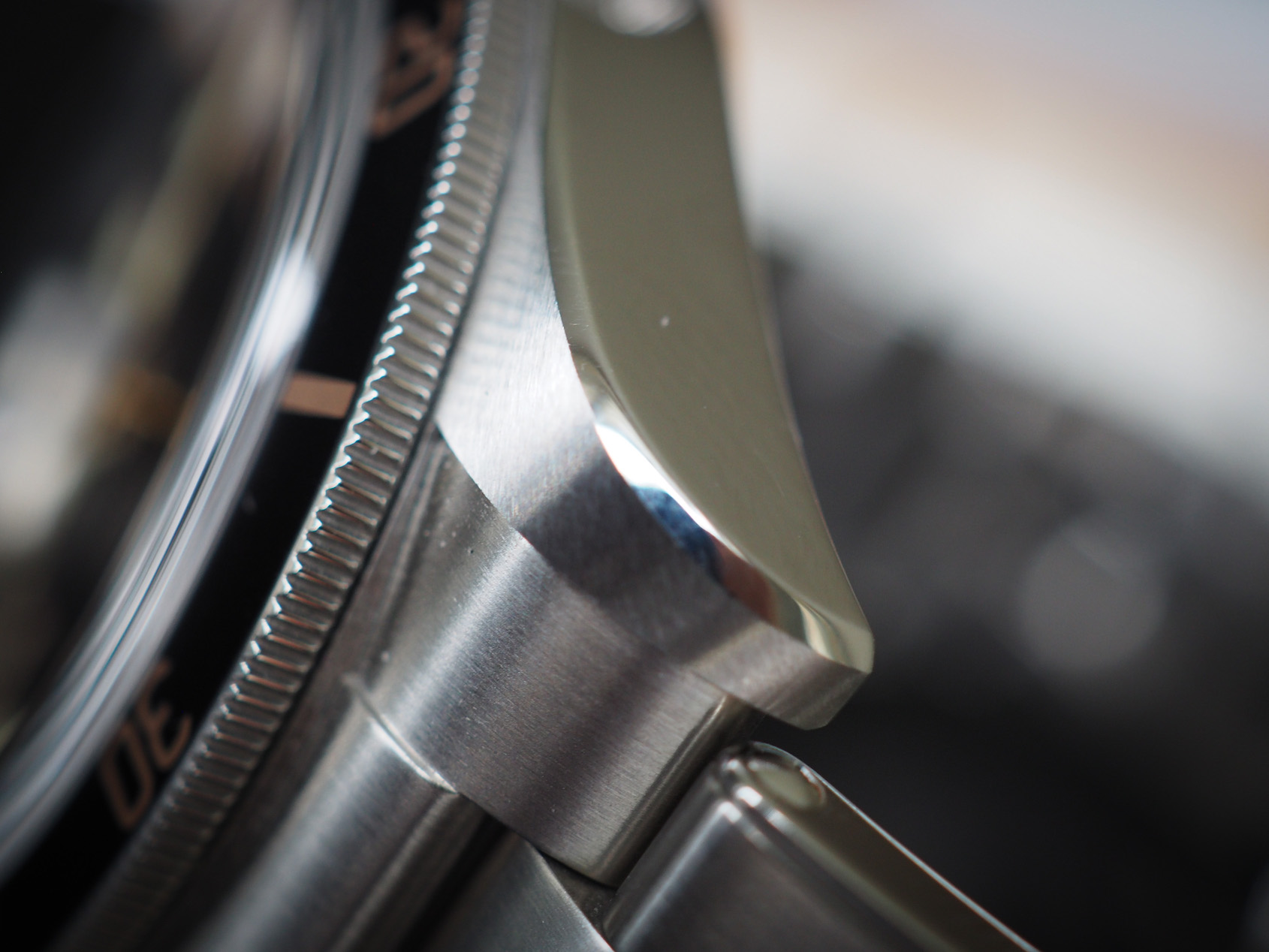 The Seiko SPB147J comes into the ring swinging. Is it chubby? Guilty as charged at a more substantial 13.2 mm thickness, but comfortable with a lug to lug of 47.6mm and the lugs being downturned by a distinct degree. The caseback is, however, thick enough to create that floating lug sensation unless you strap it down properly, which for me is too tight. But the Seiko case sides are superbly finished, granting it instant forgiveness.

A narrow centre band of brushed steel, with an acutely angled polished bevel top and bottom, slims the case size right down, hides scuffs and plays with the light. The Seiko has the classic square lug opening of its 1965 inspiration, the 62MAS, lending it an authoritative tool presence, with detailed brushed tops and no knifelike lug ends. Ultimate finish and ergonomics go to the Fifty-Eight, but Seiko wins the prize for a more interesting and complex case design as the bell rings for Round 2.

The strap and bracelet belt it out

Well, let’s admit that it’s not really a fair fight when it comes to the strapology, with one being soft and the other all armoured up. The SPB147J comes on a soft silicon rubber, whereas the BB58 sits on the much debated rivet-look bracelet. This is where the Rolex family connection shines through, as the detail work is flawless. The links fit with the absolute minimum of tolerances, and personally I love the vintage tool contrast that the polished, but unnecessary, outer rivet-plates bring. They liven up the too-perfect links, the brushed texture being just-so, leaving the surface silken.

Every tiny corner is discreetly rounded off, leaving it soft on the wrist. The clasp is equally crisp in closure, with a useful 3-point micro adjustment, and the taper, from 20mm to 18, is ’60s perfect. 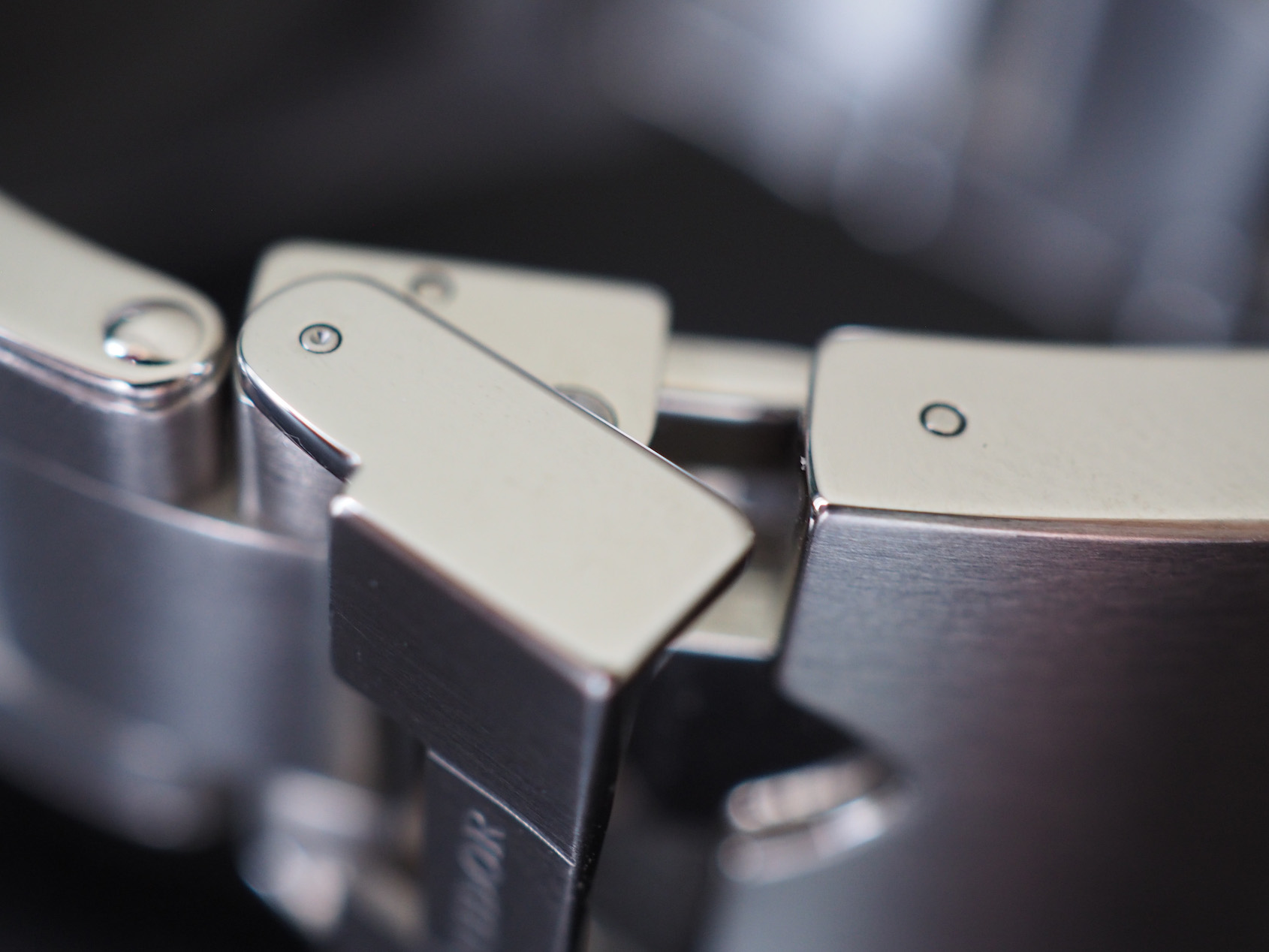 The silicon strap on the Seiko contender is an interesting take on retro inspiration, having a pebbled back and a nice 3-part pattern on the top. Soft and supple, with the nice detail of a brushed steel keeper with polished bevels, though for my 17.5cm wrist, very long due to the theoretic possible use on a wetsuit. Comfortable? Yes, in spades, but the silky perfection of the Tudor bracelet smashes it here. Bandages for the Japanese fighter, please! 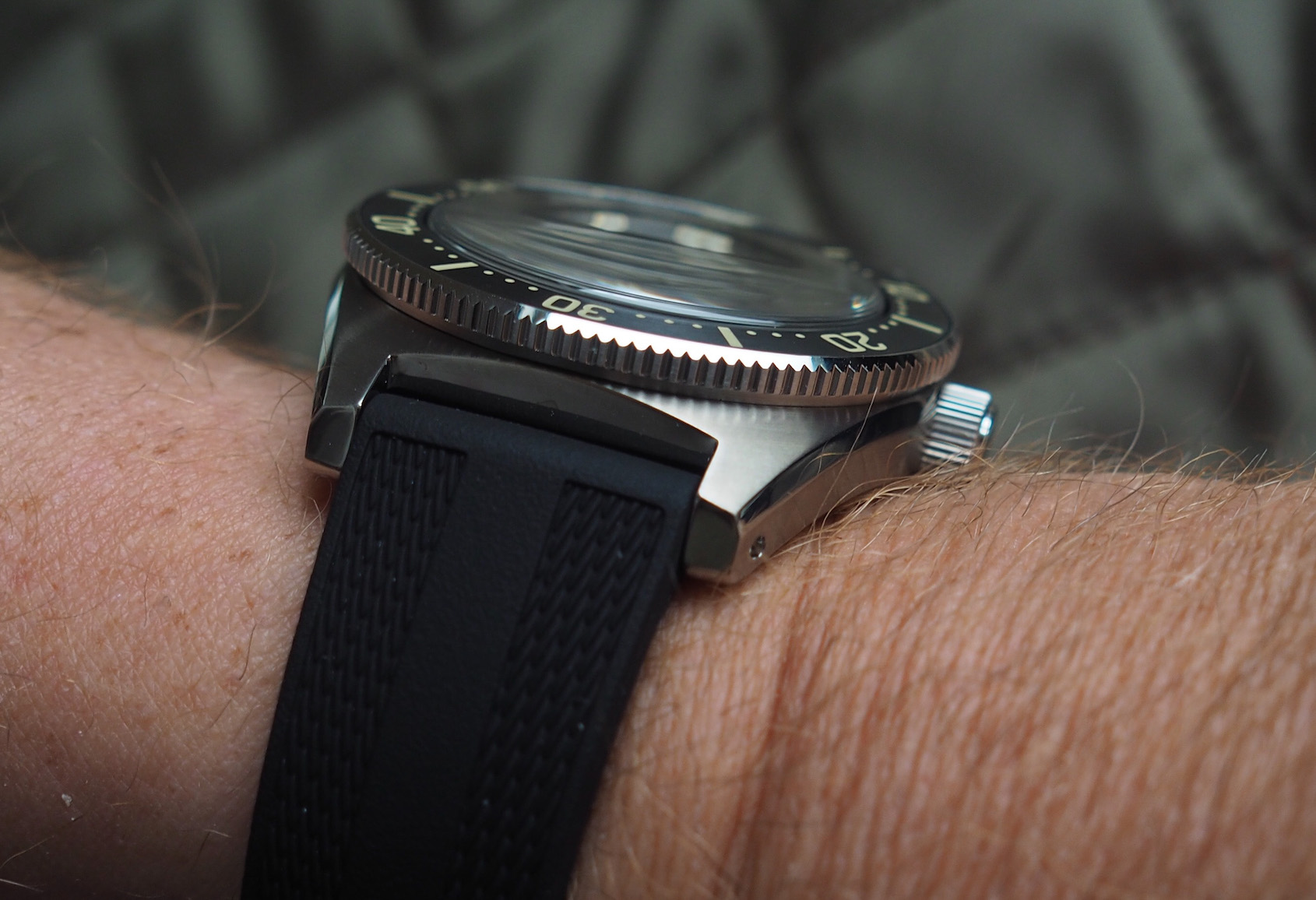 The dials enter the ring

This is where the main similarity comes into play, and gold is the weapon of choice. The Seiko Prospex attacks with its sword-like golden hands. 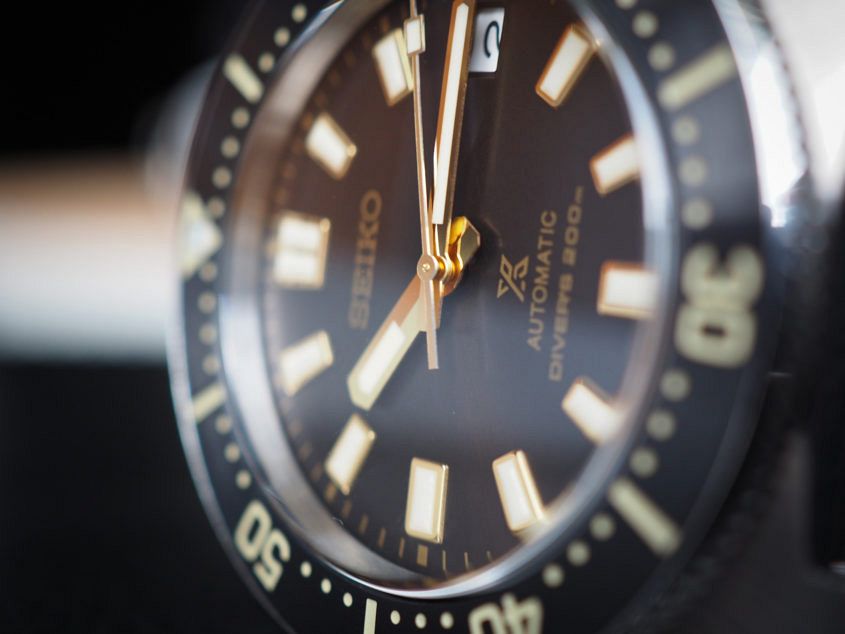 The sapphire is not as tall as the Black Bay, but slightly domed underlines the vintage identity and sits inside a broad radial brushed bezel insert. This has golden-filled engraved numerals, spaced out evenly with minute marks, eschewing the classic detailed 0-15 indication we see on the Fifty-Eight. 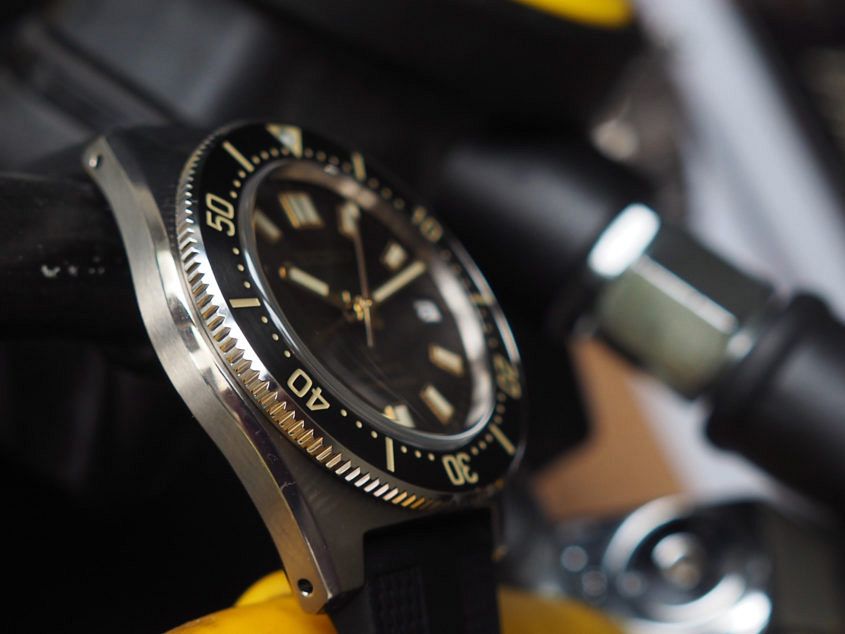 The flat and large bezel works well in shrinking the watch diameter, while underlining its tool aspect. The crisp clicks are satisfying and, thanks to a thicker bezel, it grips better than Tudor’s slim affair. What makes the big difference here is the main dial colour and surface treatment of a dark sunray chocolate bronze. The quality applied indices have a cream LumiBrite and a gold edge, lending the dial a lovely warm tinge. Indices are large and blocky with the Seiko double-indice at 12; the only criticism is a lack of sharpness, with the gold framed indices being quite shiny with rounded edges. This, combined with the cream lume and the shine of the bronzy dial, creates a rich warm glow but makes it less legible in the cosy light of an evening, particularly smaller details like the minute track. 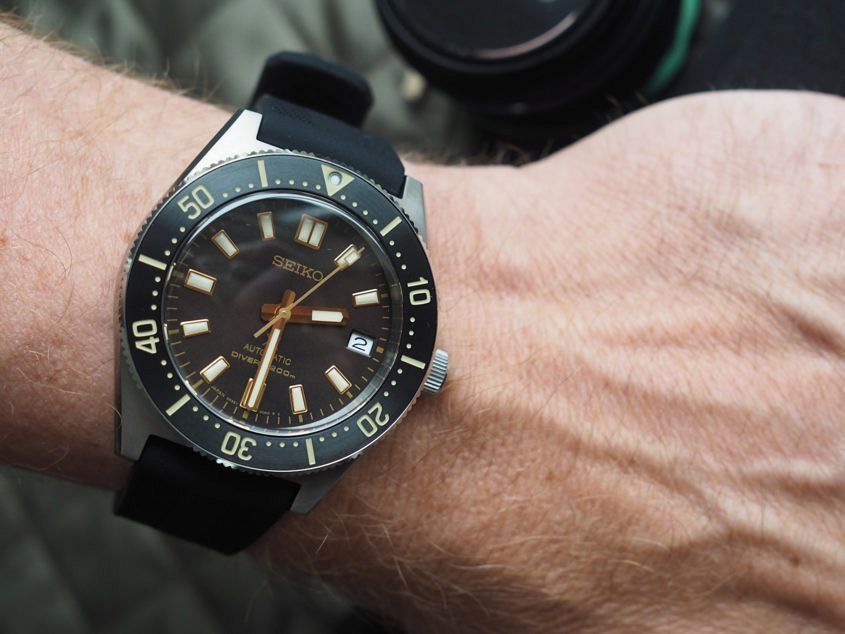 A date is useful, but here I’ll actually join the no-date throng, as the white date wheel pops way too much against the chocolate backdrop. Match the wheel or drop it, I’d say. The hands have received a mixed reception, being contemporary rather than the baton hands of the 62MAS inspiration. Me? I like them a lot. They create plenty of interest, with their raised central crease reflecting the light and finishing off with a sharp point. Seiko in-house production is at the same level as Tudor (if not more, seeing as though some movements there are Breitling and ETA shareware), and the square lollipop seconds hand is another sharp detail proving the point. The Black Bay dial fights its corner in a more subdued manner, but with every detail sharpened to perfection. 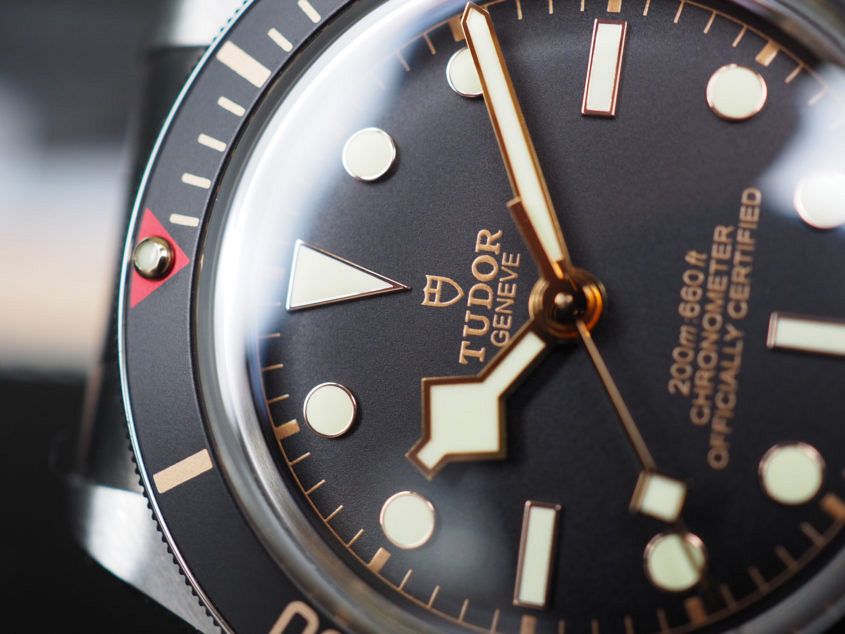 I am torn on my personal view of the actual surface. It is a semi-matte finish with a slight texture to it, which looks perfect in low light but can look a tad cheap in the sun. But the fight becomes unfair, as the gold indices are slightly taller than the SPB147, and have the sharpest edges I’ve seen this side of the pandemic. Millimetre perfect razor-sharp gold frames a light cream lume and makes for crisp legibility at all hours, while the gold text and the beauty of the circular thin minute track is flawless and macro perfect. The hands are, for me, a favourite detail of the dial, with the snowflake hour hand leading the way, all with a liberal and precise coating of Super-LumiNova. They look sharp enough to cut down the Prospex fighter and win this round in a visceral way and, boy, are they photogenic. But we have to remind ourselves that you’ll get three SPB147Js for the price of the Fifty-Eight, something that is visible in the details — but not a threefold betterment. 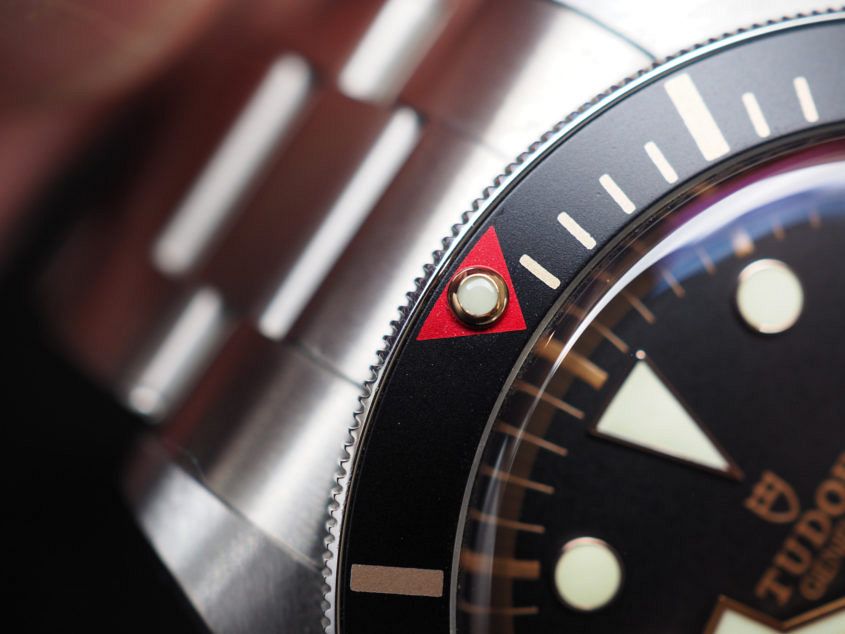 The Tudor bezel is a picture-perfect vintage diver’s tool in classic aluminium, red triangle with a lume pearl, and the detailed 0-15 markings. It sits low and almost flush with the case; a looker, but with its thin edge rather hard to grip. If we include the unspoken fact that 90 per cent of the Tudor bezels will never be turned for timing, we will give the dial prize to the Tudor for the beguilingly sharp gold details. But if you plan on taking it diving, your gloves will struggle for grip. The large ’60s style screw-in crowns come out on equal points in the match. The Fifty-Eight crown, with its detail work, has a slight edge in the Tudor rose engraving and feels rock solid, but the Seiko 3 o’clock crown is a lot lighter to operate and no slouch in the precision stakes.

The in-house battle of cogs

Similar spec in-house movements are fitted under the casebacks of both the Black Bay Fifty-Eight and the Seiko Prospex as the final round begins for the two contenders. The main difference is Tudor’s precise Chronometer specification, whereas the Seiko will imbue the watch with a lower servicing cost over time. The Tudor movement is their new, for the Fifty-Eight, MT5402 caliber; small at just 26mm across, ticking away at 28,800vph and a nice 70-hour power reserve. And it is a specific no-date movement, so no ghost clicks of the crown here – this is Swiss after all. 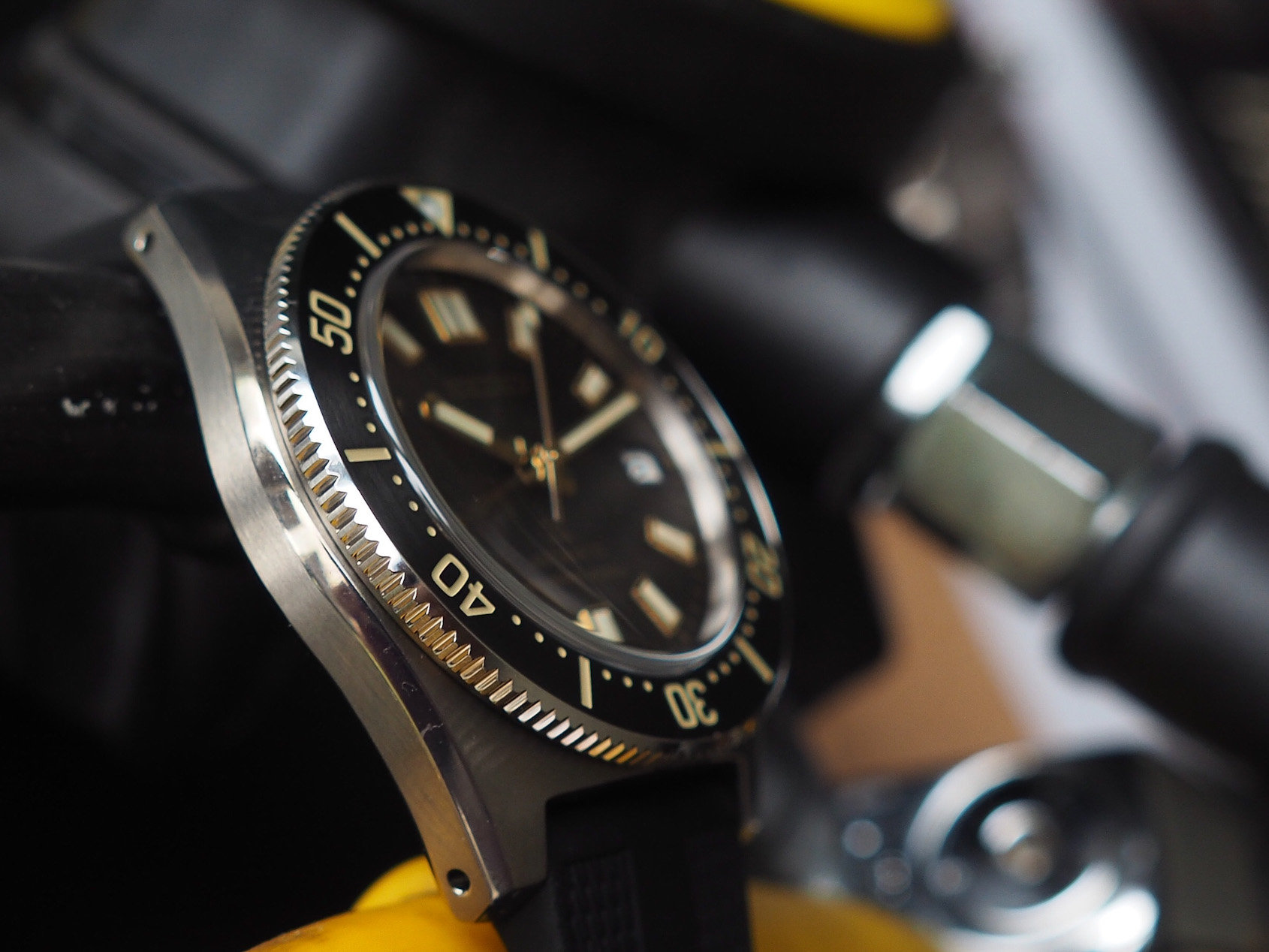 The Seiko Prospex comes with the well-known 6R35, also at 21,600 vph with a 70-hour power reserve. This is a well-known and proven caliber, which is a further development on the 6R15, a movement like many Seiko in-house calibers known for quite often equalling COSC specs. Yes, the Tudor movement is beautiful, but should we judge this battle on the merits of the imbued Tool Watch qualities, we wouldn’t give that a second thought, would we? Gilded tools they are, and even with the beauty and Rolex ascendancy of the MT5402 caliber, the points are equal under the caseback when we consider the value-for-money aspect. 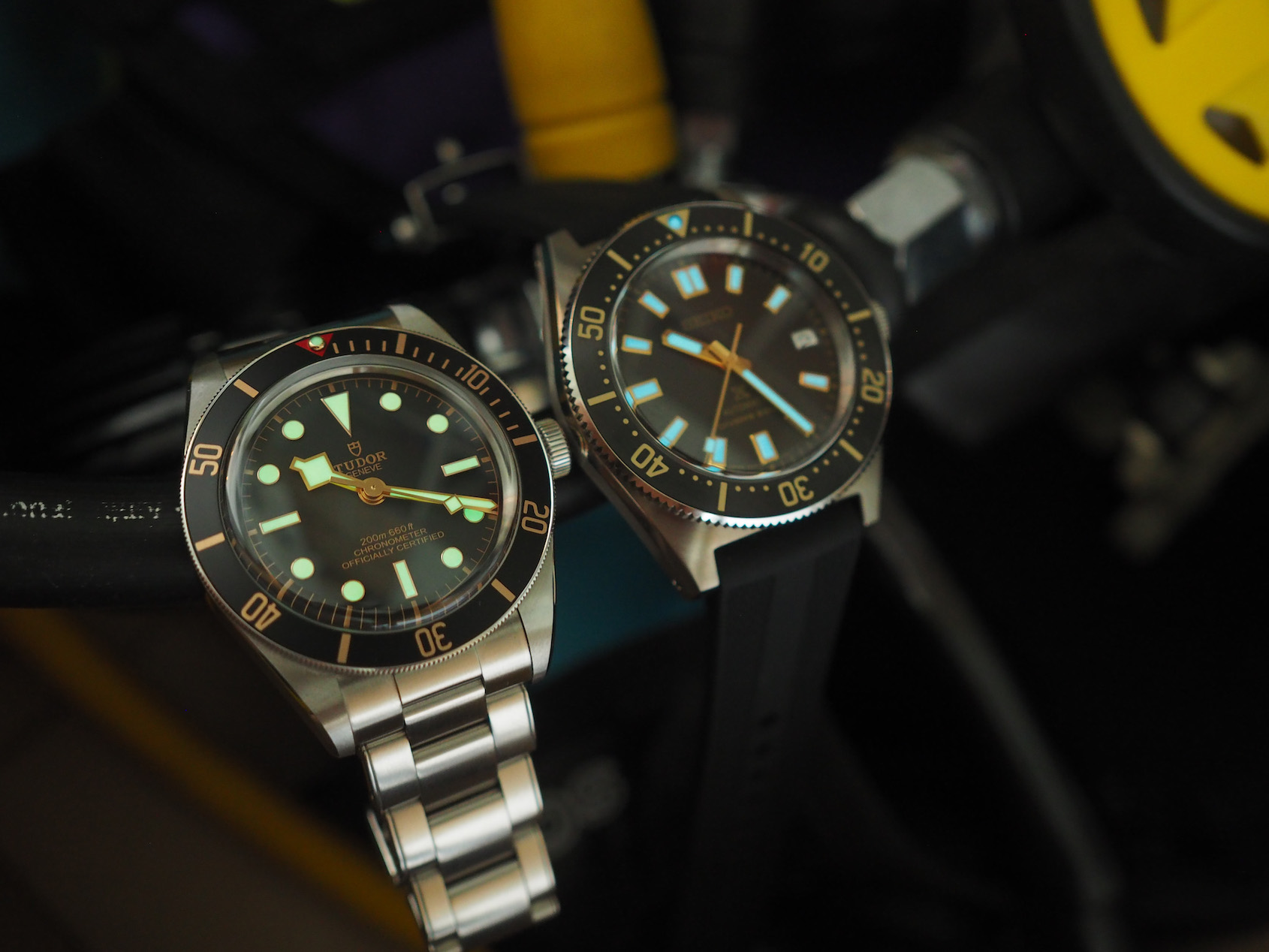 The verdict and post-match commentary

I fully understand why the Black Bay Fifty-Eight is the watch du jour: it sits silky smooth on the wrist with a lithe presence, but with strong visuals and all the right vintage details. Dial side up, the balance of black, cream and gold is beguiling. But the plucky Seiko wins an important round with the distinctly Japanese execution of the case — slimming facets and delicate bevels trumping the slab-sided Tudor, lending it a quality that punches leagues above its price range.

That’s why this arduous battle can be decided two ways. With value for money in the equation, I’d say the match is tied. However, if we base it on a sum total of pure detail and aesthetics, the BB58 wins with its profound comfort level and finishing. But maybe the most important thought behind this battle of Gilt is that #smallisthenewbig and 38-40mm watches are here to stay, worldwide and vintage-inspired. 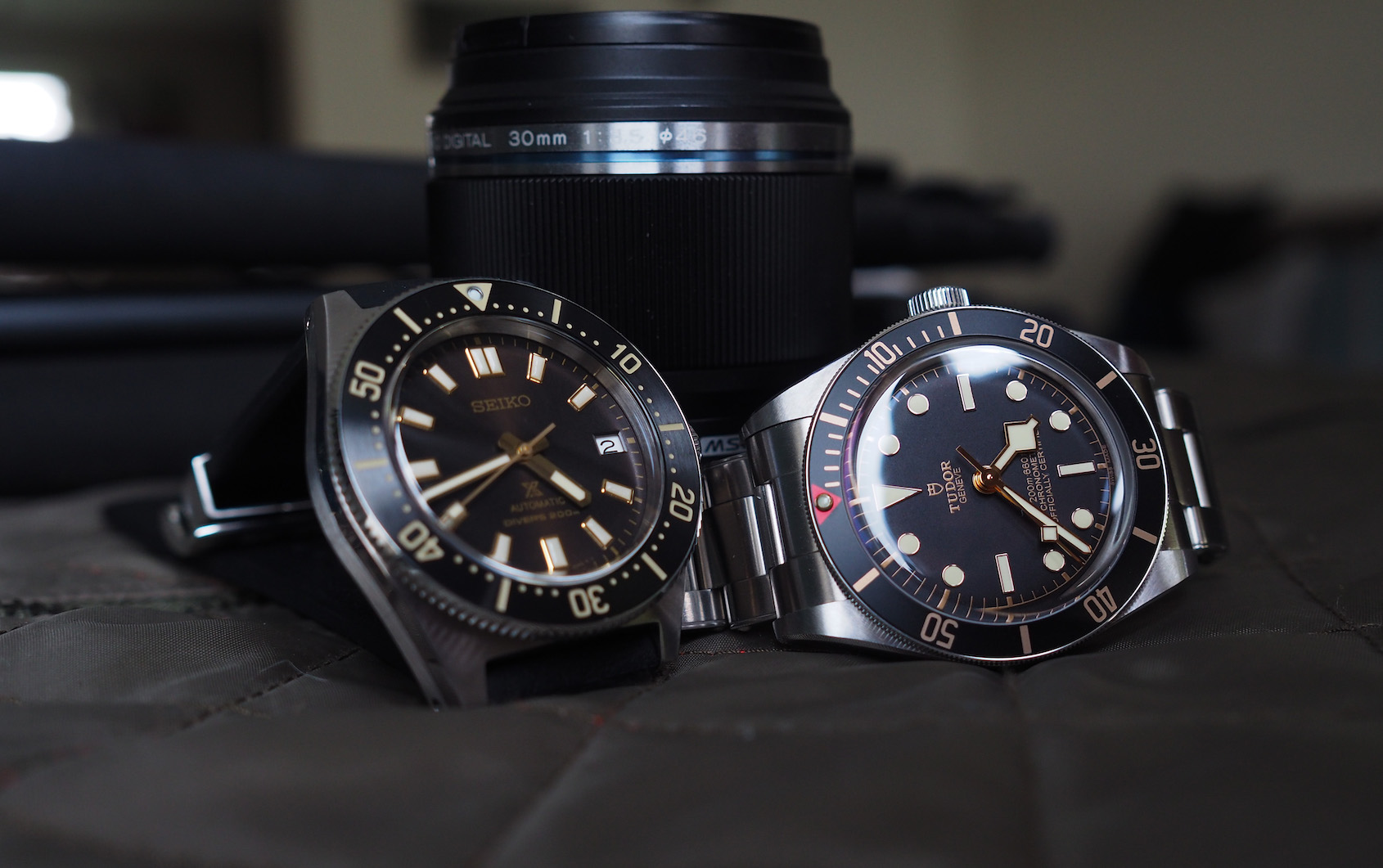 The Seiko Prospex SBP147J has an Australian RRP of $1595 and is available at Seiko boutiques and authorised dealers.

The Tudor Black Bay Fifty-Eight has an Australian RRP of $5000 and is available from Tudor authorised dealers.