Earth Attacks! The new Omega Speedmaster X-33 Marstimer is ready to blast off for the red planet

The story of the Speedmaster Professional being the Moonwatch has been told a tiring number of times. The story of the Mars Watch however, is much more of a novelty. First released in 1998, the Speedmaster X-33 was designed by Omega in collaboration with the USN Blue Angels and USAF Thunderbirds, and has since seen use on space stations and the space shuttle. Though it was created for the possibility of mankind making another giant leap and landing on the surface of the red planet, we’ve not yet succeeded in that endeavour. The Bienne-based boffins aren’t ones to care however, as they’ve just announced another Mars-inspired watch – the Omega Speedmaster X-33 Marstimer.

If you thought of the Speedmaster as solely a purist’s choice, you’re in for a surprise with the X-33 Marstimer. Not only does it ditch the tachymetre scale, but it also replaces the iconic three-register layout with a digital display. Capable of displaying multiple Earth and Mars time zone formats, both the analogue and digital displays glow brightly after dark, thanks to a generous coating of Luminova. To go along with the Martian themes, Omega chose to accent the X-33 Marstimer in red hematite which covers the surface of the planet. This is seen in the anodised aluminium bezel, top left chronograph pusher and the gradient-graced seconds hand. The bezel gets another nod to the space theme, with rocket-shaped markers at 15-minute intervals – Alaska Project, much? 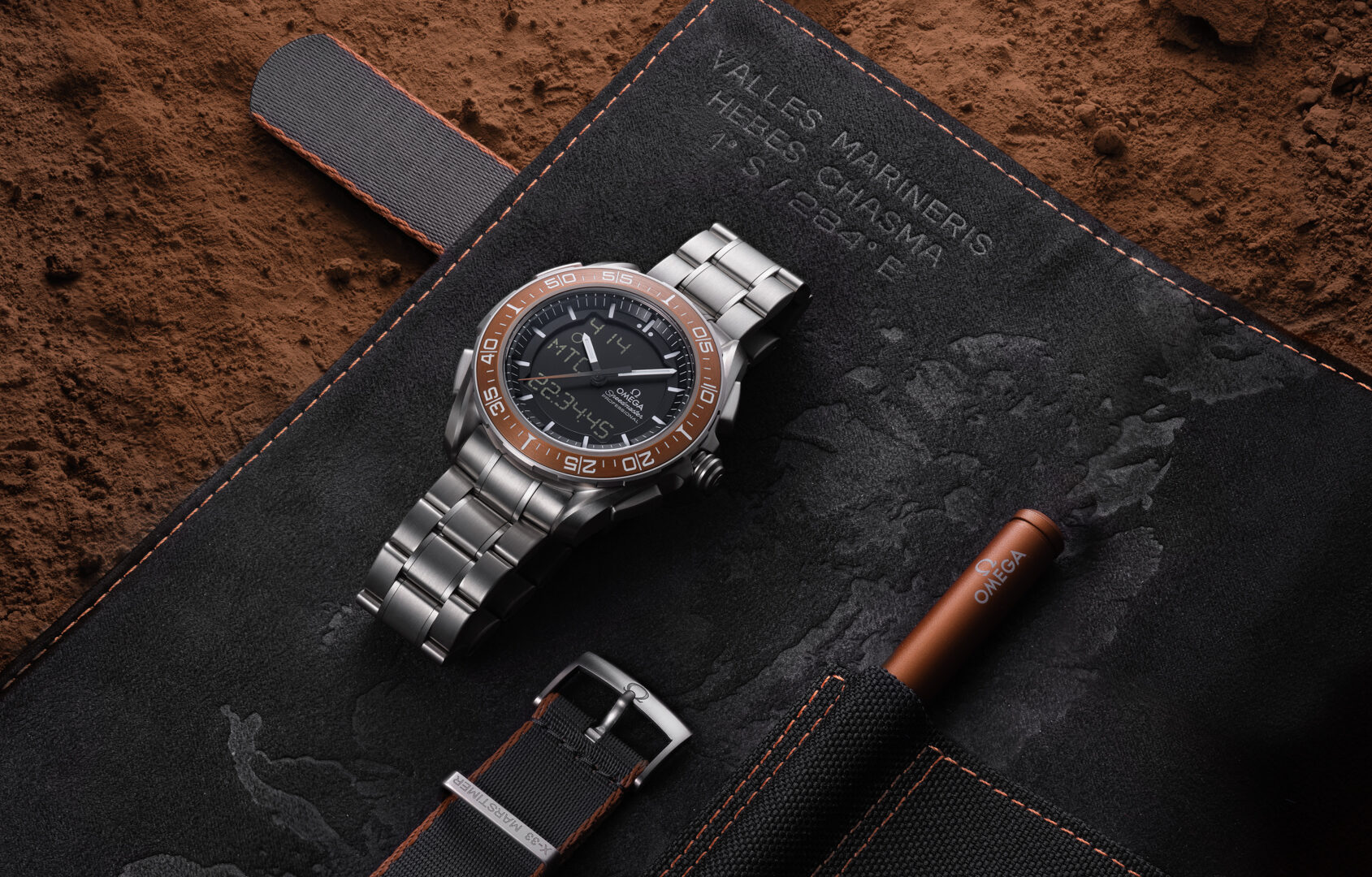 At 45mm in diameter and 14.9mm in height, the X-33 Marstimer isn’t a far cry from some of the larger mechanical Speedmasters we’ve seen in the past, nor past X-33 renditions. The twisted, lyre lugs with a wide chamfer are reminiscent of the asymmetric Professional case, though the caseband of the X-33 Marstimer sprouts many a pusher-shaped appendage. The deeply engraved caseback reveals the collaborative effort that is the Marstimer, as Omega employed the help of the European Space Agency. A closer look reveals an intricate construction, as the X-33 features a double caseback. One helps the resonance of the *very* loud alarm, while the other supposedly helps with the low 3 bar water resistance. If there is any water on Mars after all, you’d do well to steer fairly clear.

What is distinctly different, however, is the material. The X-33 Marstimer is rendered in grade 2 titanium for both the case and bracelet. The Speedy-style bracelet itself combines grade 2 and grade 5 titanium, using the harder composite for the mid-links and screws – you can read all about titanium and its grades here.

Should you wish to swap the bracelet out, Omega provides you with an additional orange and black NATO strap and strap changing tool. These are packaged in the specially designed watch roll that presents a relief of the Hebes Chasma, one of the many imposing canyons scarring the surface of the planet.

Quartz, but make it complicated AF

To incorporate all the calculations, Omega’s existing Calibre 5619 powering the Skywalker X-33 wasn’t up to the task, resulting in the creation of the 5622. With all the thermo-compensated, ESA-tested-and-qualified magic, Omega added a myriad of Mars functions. The exhaustive list includes Mars Time Coordinated (MTC), Universal Time Coordinated (UTC), Phase Elapsed Time (PET), Mission Elapsed Time (MET), alarms and a perpetual calendar. It’s worth noting that all of these functions work in both Mars and Earth times, with two dedicated time zones for both planets. Not gonna lie, “time zones for both planets” felt strange to say. 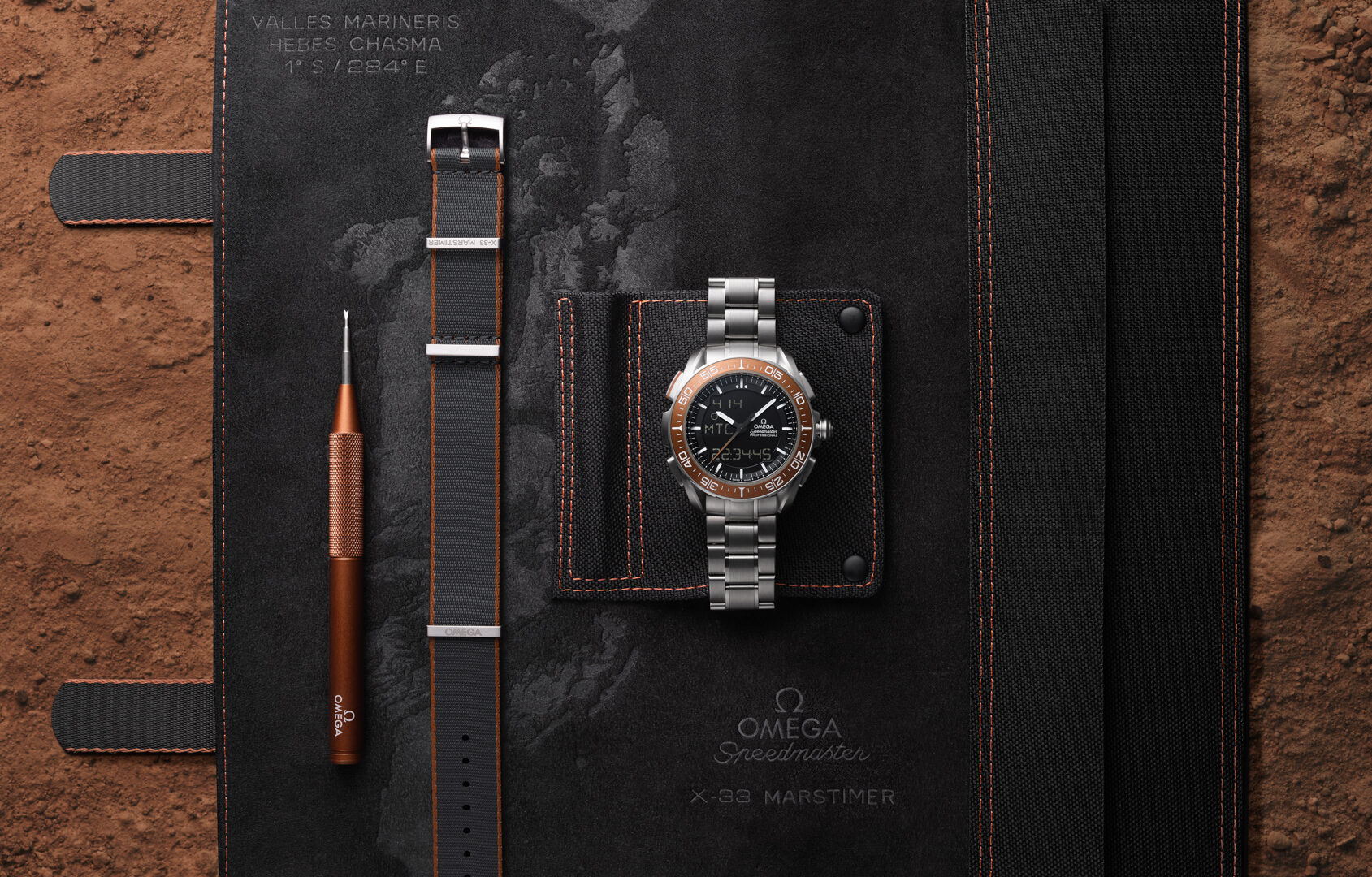 The Omega Speedmaster X-33 Marstimer is available now, from your nearest Omega boutique on Earth. Availability on Mars is to be confirmed. Price: A$9,750