What is it really like to wear a pocket watch in the 21st century?

One evening I found myself at a RedBar gathering at Mr Porter, where many Richemont brands were displaying some of their latest timepieces. Not long before, I had just acquired my Longines pocket watch on eBay and I was eager to share my latest acquisition with my watch friends. The only catch, however, is that my pocket watch did not come with its original chain – so I had no proper means of “wearing” it. 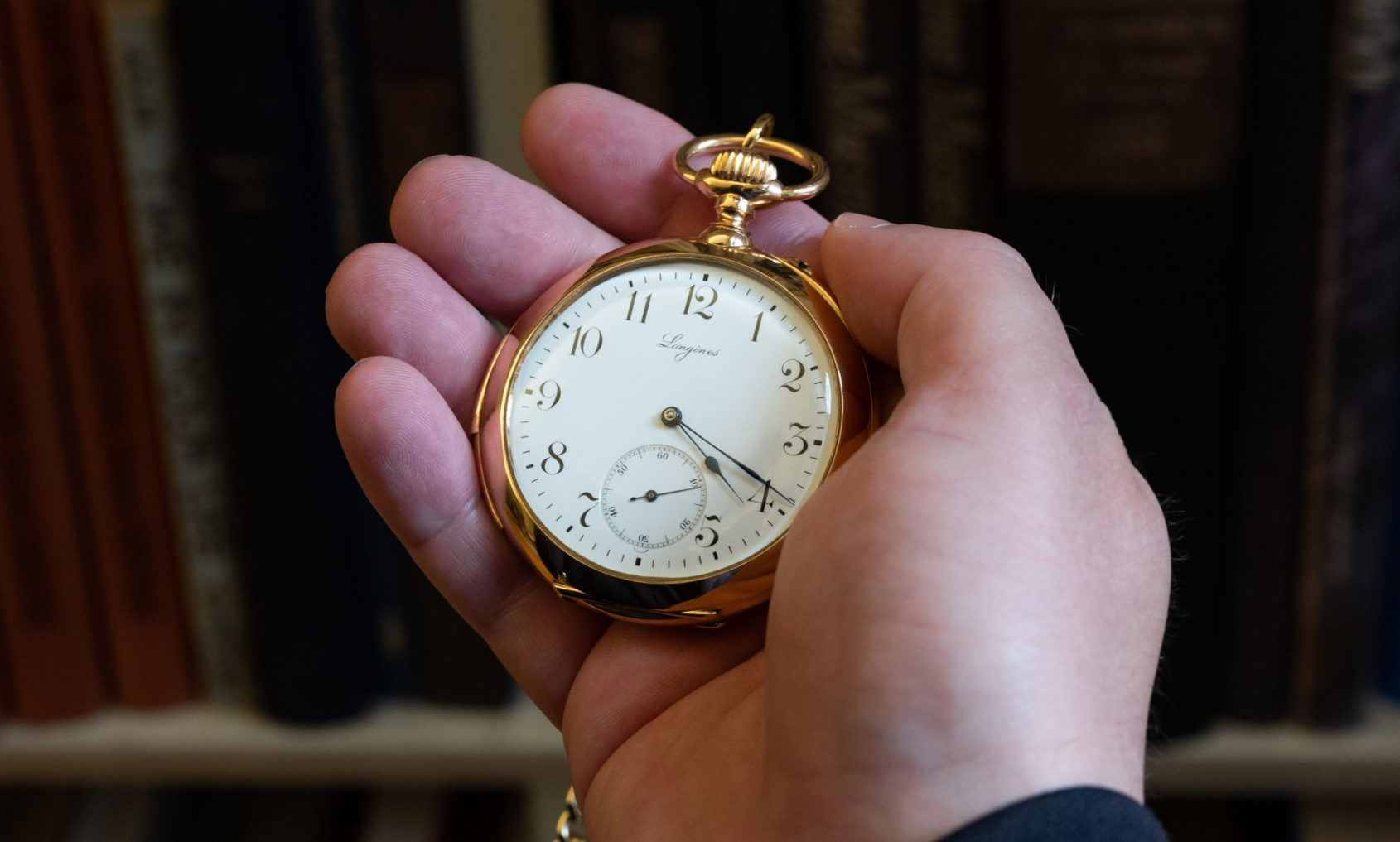 I did, however, have a pocket to put it in, of course, so I carefully tucked the watch in my inside jacket pocket. When I arrived at the event, many complimented me on the watch. But many also asked if I planned on wearing it, and, if so, how would I wear it. Holding it chain-less was not ideal as I, and those around me having a closer look, risked dropping and destroying it.

When I purchased it, my sole focus was owning a timepiece with my favourite complication: a minute repeater. I had some fantasies of wearing it, but never really ironed out the logistics in the initial weeks of having it in my possession. A few months later, I put a plan into action to try it out. As an experiment, I wore my pocket watch for a week straight instead of a wristwatch. The aim was to understand what it is really like to wear a pocket watch in the 21st century.

Before we dive into the findings of my little experiment, here is a little info on the pocket watch itself. Made of 18K gold, my Longines pocket watch is 54mm in diameter and 12mm thick. It is an “open face” pocket watch and has a porcelain white enamel dial, with blued steel central hours and minutes hands as well as a blued steel sub-seconds hand. The seconds do not hack, and the hands are controlled via the pin-set mechanism adjacent to the stem (you depress the pin with your fingernail in the gap, rotating the crown while it held down). I am unclear whether the case is yellow or rose gold, but, if I had to guess, it is yellow gold that has warmly aged over its 100+ year old lifespan. 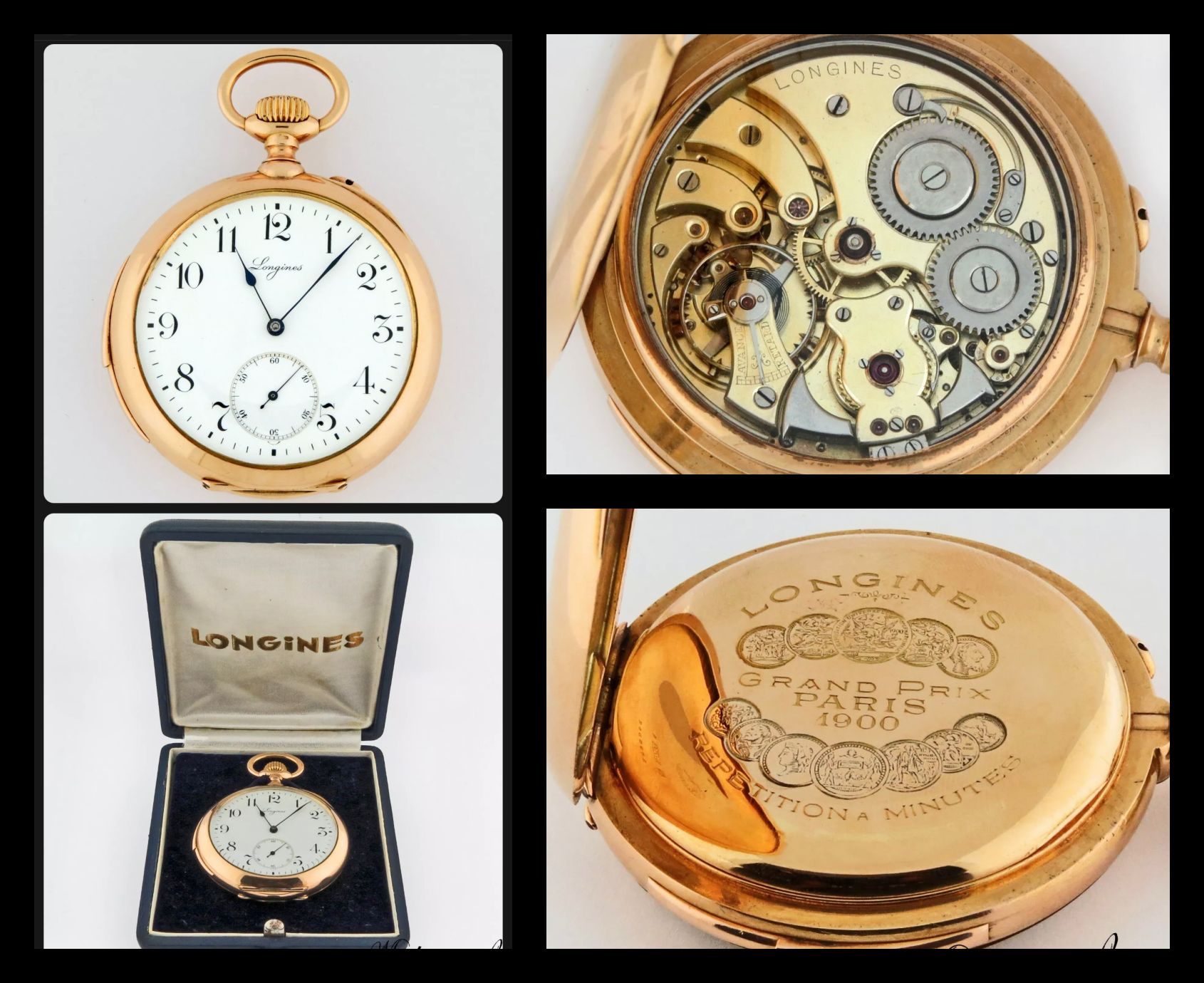 Circa 1900, the pocket watch came with its original box. Under its hinged caseback, the engraving “Longines Grand Prix Paris 1900 Repetition Minutes” can be found. Beneath that solid caseback lies the Longines calibre L19/20, with a mainplate and bridges left in unaltered brass – no platings. There are very nice chamfers to the bridges and the hammers of the minute repeater – which chimes the hours, quarters, and then the minutes. The chime, even with its age and unknown service history, still sing incredibly loud and I never tire of hearing their song. Really, the one missing element was the original chain and finding an aesthetically and fiscally suitable option is not an easy task considering the unique warm hue the piece has garnered over the last century or so.

How I wore it 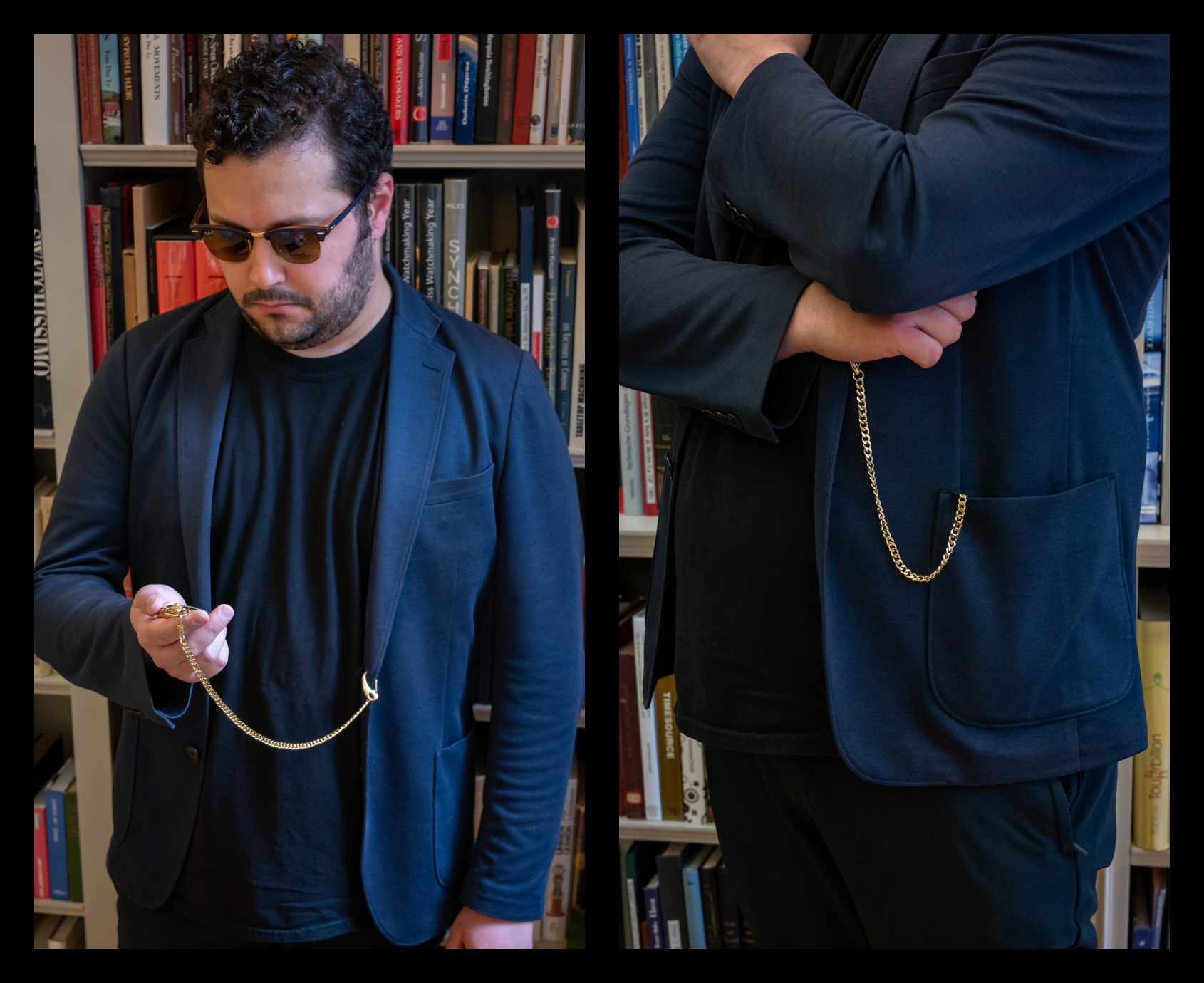 As a temporary solution, for the sake of performing this experiment, I purchased a brass pocket watch chain for $15 USD on Amazon – so it is by no means a perfect colour match for the pocket watch. Looking at the image above, you may be wondering where my waistcoat is. Ultimately though, I wanted to try and discover how it could be worn in a modern way, rather than attempt to do Peaky Blinders cosplay. Also, it is frankly way too hot in the city right now for a three-piece suit.

The charm and romanticism of it all has strong appeal

As a manually wound pocket watch, with a power reserve that lasts a bit over 24 hours in its current state, I really enjoyed the ritual of winding it up fully each morning. It does lose a fair bit of time over the course of a day, something I am on the record for being irked by. Of course, considering its age, the pocket watch gets a pass in this aspect, and to be safe I would always ensure I started my day with it running around a minute ahead of the actual time. Laborious, but at least a labour of love.

The time-capsule factor also had a strong charm and appeal to it, as did knowing I was doing something different than all the other eight million or so people in New York City. I am not particularly a hipster, but there is something to be said about being somewhat of a piece unique with your wardrobe and timekeeper. The glances I got at a street corner as I pulled the pocket watch out to check the time gave me a serotonin boost each time. Whether it was an enjoyable quirky sight for the pedestrians around me, or a “WTF, who does this guy think he is?” moment, I’ll never know for sure. But it felt really good to be a walking custodian of history rather than let the pocket watch just sit on a case situated on my desk.

Within the bubble of the watch community, I found it brought joy to others as well. Many smirks and smiles as I pulled it out of my pocket, and it felt much safer letting people handle it as it was chained to my jacket – god forbid it slipped out of their hands. It felt like people were rooting for me in a way, that I was taking up a cause of preservation and keeping classic watchmaking and style alive with a modern twist.

But it comes at a price… 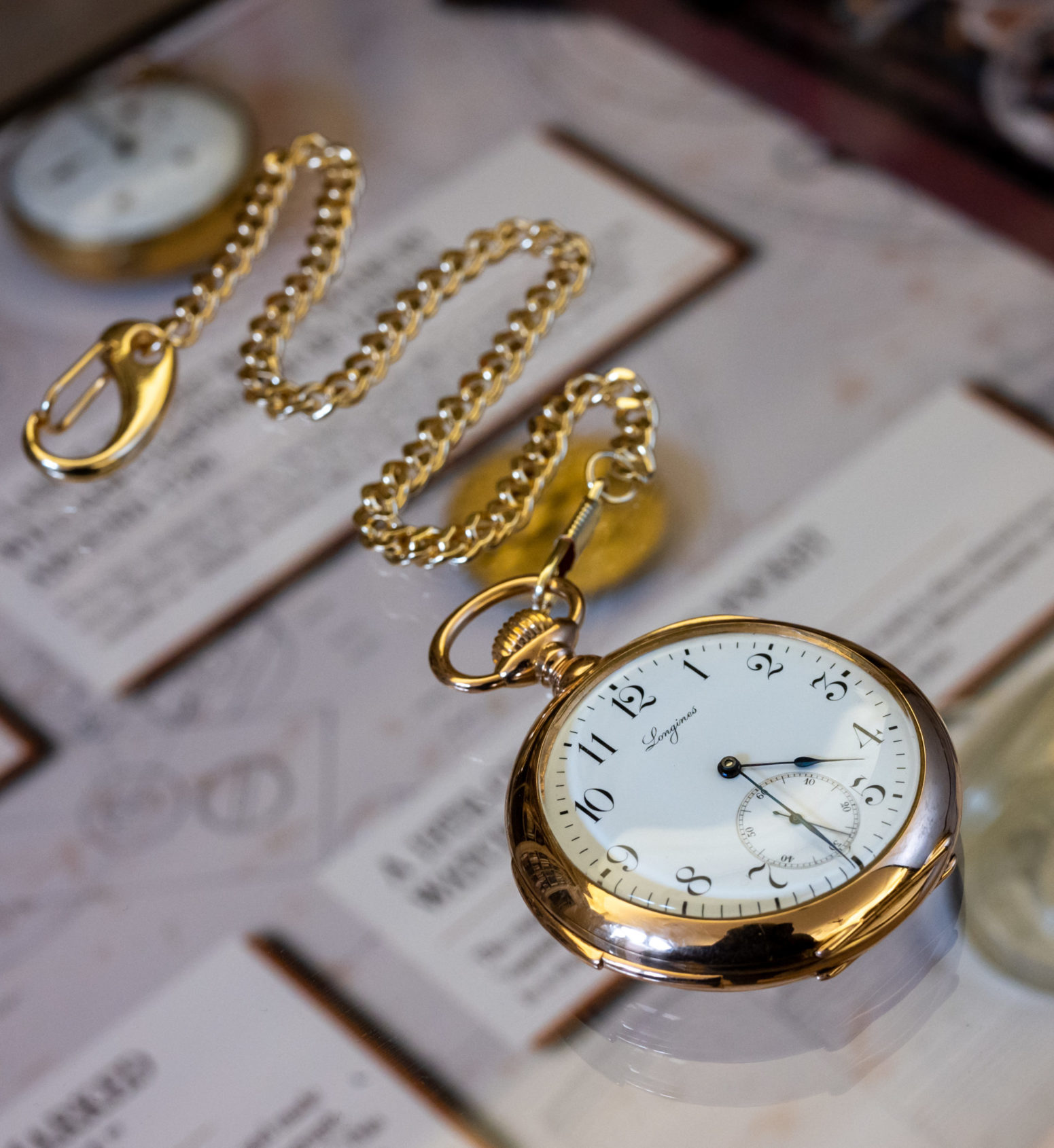 While the charm of it all is alluring, there is a level of consciousness you have to have in order to pull it off. For starters, walking into the train station each day I found I needed to put my hand over the pocket the pocket watch rested in so that I could ensure the turnstile did not smack it. You also, at least in regard to how I wore it, need to be aware of what you lean on or brush up against as you really want to avoid shock and damage. I also, if I am being totally honest, felt less confident pulling it out while riding the train. Whether holding a sizable piece of solid gold in a closed city train car, or the threat of train turbulence throwing me around while holding it, the anxiety outweighed the charm factor in those moments on the subway.

Another aspect to consider is the wardrobe a pocket watch requires. Sure, I didn’t go full Peaky Blinder get-up. But, when the temperature is hovering close to 90 degrees, having a jacket on is not always ideal. Theoretically, I could have clipped the chain to a belt loop and put the pocket watch in my pants pocket. But, I typically have my phone in one pocket and my keys and AirPods in the other. So, short of having a bag with me, or putting the pocket watch in my back pocket (which would be incredibly risky and stupid), this was not really feasible for me to do. It also wouldn’t have conveyed the style I wanted to have while wearing it, looking more like a chain-wallet than a modern take on how a pocket watch was classically and elegantly worn.

Probably the biggest scare I had was the threat of rain/moisture. I was very vigilant about knowing the weather forecast each day, but, at times, the weather can be quite unpredictable. So, after a day at the office, when I stepped out on to the street and received an invitation to meet up for dinner with some colleagues I was excited to get an end-of-day meal. But, as I started to text to reply that I would join them I suddenly felt a rain drop hit my head. I headed back beneath an awning to stop and look at the current forecast, and when I saw rain was imminently on the way I knew I needed to rush home before I, and more importantly the pocket watch, got soaked. Watches of this age are not really water-resistant, so they are definitely not ideal around liquid.

Would I recommend giving it a try? 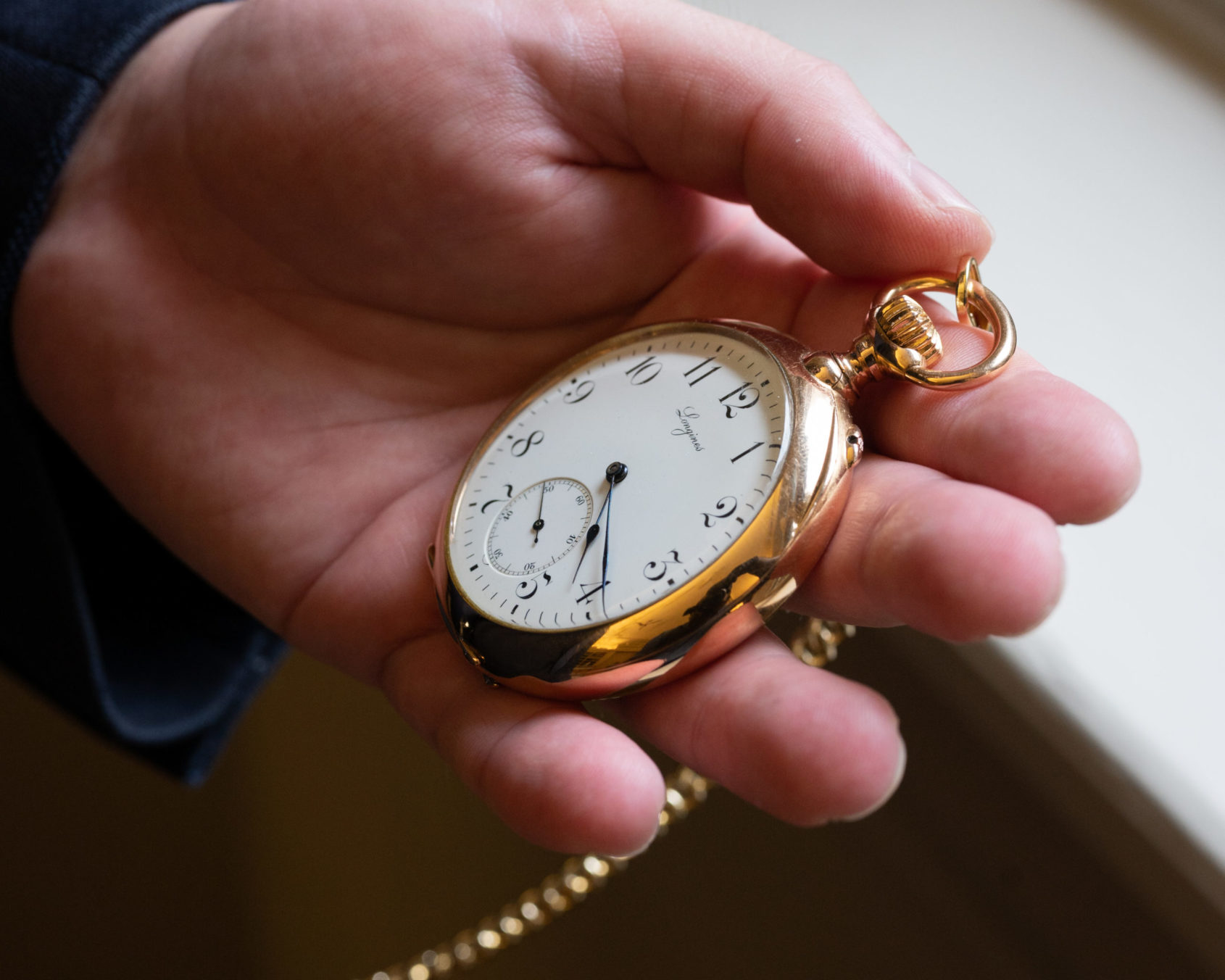 I think the best analogy I could make, to sum it all up, is that a pocket watch is like a dog. Not because the chain is like a pseudo-leash for your timepiece, although that perhaps could be a parallel. No, it’s more the fact that growing up, when I asked my parents if we could get a dog, they would always tell me a dog is not a toy – they are a responsibility you have to maintain and care for, bringing rituals that you have to engage in. So, if you are willing to endure a heightened sense of timepiece-safety awareness, and the requisites of wearing one, then I say go for it. It really is fun for the most part, and definitely will make you stand out in a crowd if that is your vibe. But, you also have to keep in mind the environment you are in and the crowd you are with. Wearing a pocket watch to a bar, club, or festival would be a very bad idea. You don’t want to wear a pocket watch, at least daily, if you do not want to have to reign in and restrain your behaviour on a given day.

Pocket watches these days can be found for great prices, so I think they are best suited to being an interesting switch-up to your weekly timepiece roster rather than being a daily wearer. Suitable for curated moments, rather than every moment. Of course they are less practical, and much more of a responsibility, but, in the right moments, they can definitely elevate your mood and day.