Back when I was first dipping my toes into the waters of watch enthusiasm, the IWC Big Pilot was one of the first luxury watches that captured my admiration. I had no means to afford it at the time, and I did not have the level of understanding I do today, but its utility and design spoke to me and I thought it was among the coolest wrist companions available on the market. I still have a fondness for the watch today, but I must confess it is watch I would not add to my collection. Why? Because it is simply to large for my wrist.

There is nothing wrong with the watch itself, I still admire its design, but with my wrist being a hair over six inches in circumference the watch would flare out and dwarf my wrist. Many have faced the same challenge, hoping that one day IWC would present a solution for those looking for a more compact incarnation of the coveted pilot’s watch. Today we have a step in that direction, with the new IWC Big Pilot 43 – a re-proportioned take on the original Big Pilot watch that started it all back in the 1940’s: the Big Pilot’s Watch calibre 52 T.S.C. 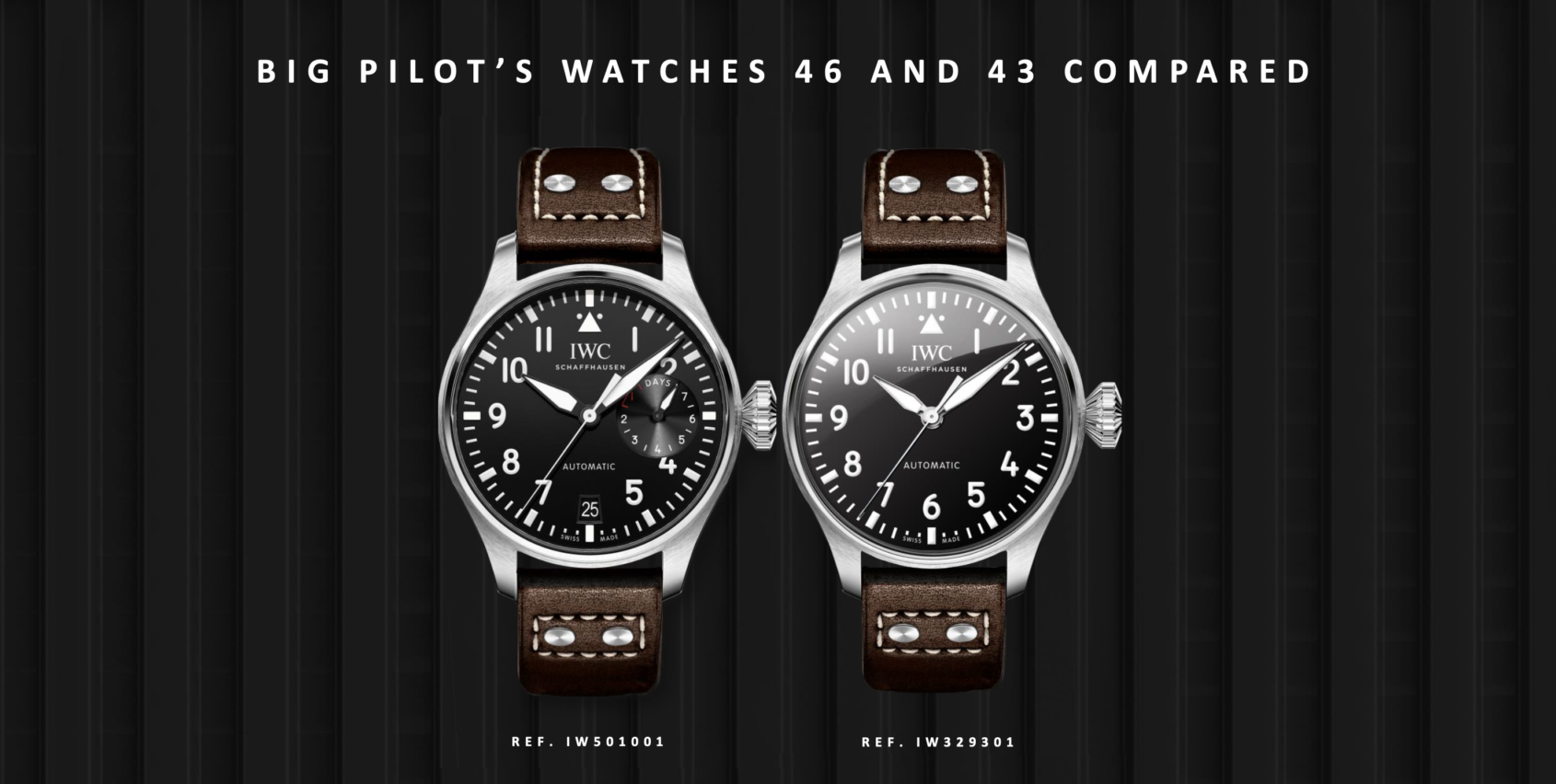 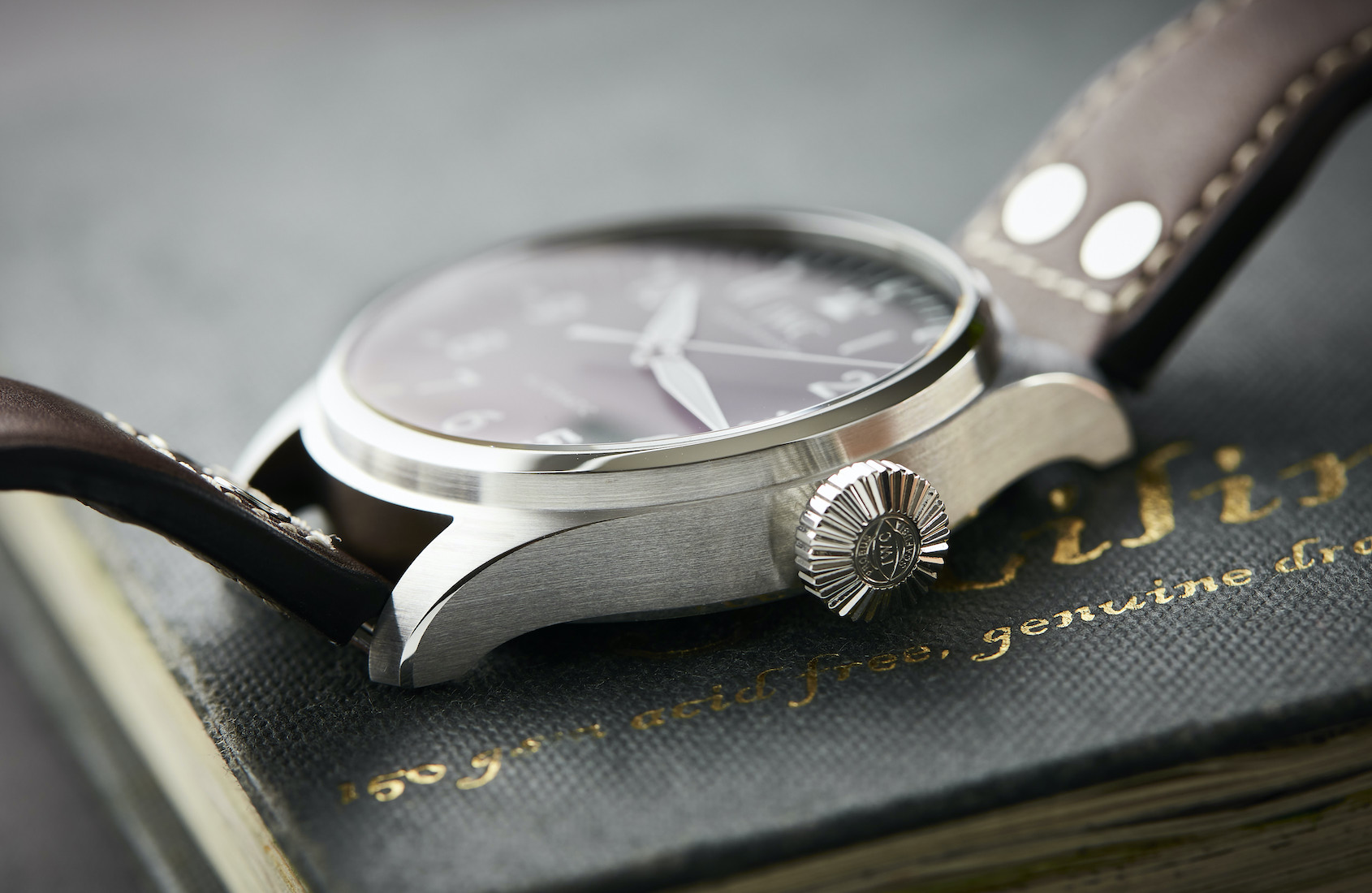 In terms of case aesthetic, the finishing of the IWC Big Pilot 43 remains the same as the Big Pilot 46 introduced in 2002. You have a satin brushed case with a hairline thin mirror polished bezel to frame the large and legible dial. The Big Pilot 43 case is simply a scaled down version of the Big Pilot 46, the ratio of proportions being the same but to a smaller scale. The case of the Big Pilot 43 has been redesigned to have a more compact diameter (46.2mm versus 43mm) and thickness (15.5mm versus 13.6mm), with components such as the crown and the measurement lug-to-lug scaled down to meet the same ratio of proportions as the Big Pilot 46. The largest differences between the cases are the casebacks, as well as their levels of water resistance. The Big Pilot 43 has a new screw down exhibition caseback that proudly displays the in-house caliber within, whereas the Big Pilot 46 has a solid caseback and inner iron cage to protect against magnetism. IWC acknowledges the lack of the inner iron cage may take away a tad from the purity of its design, but for the modern watch buyer they felt it was a bonus to be able to see the caliber within the watch. While that may irk devout fans of the Big Pilot, I think they will be pleased with the upgraded water resistance – an increase from 60 meters on the Big Pilot 46 to the 100 meter rating found on the Big Pilot 43. This makes the Big Pilot more versatile than ever before, and allows the watch to me more of a candidate for wear when you take a trip to the beach or other areas with water. 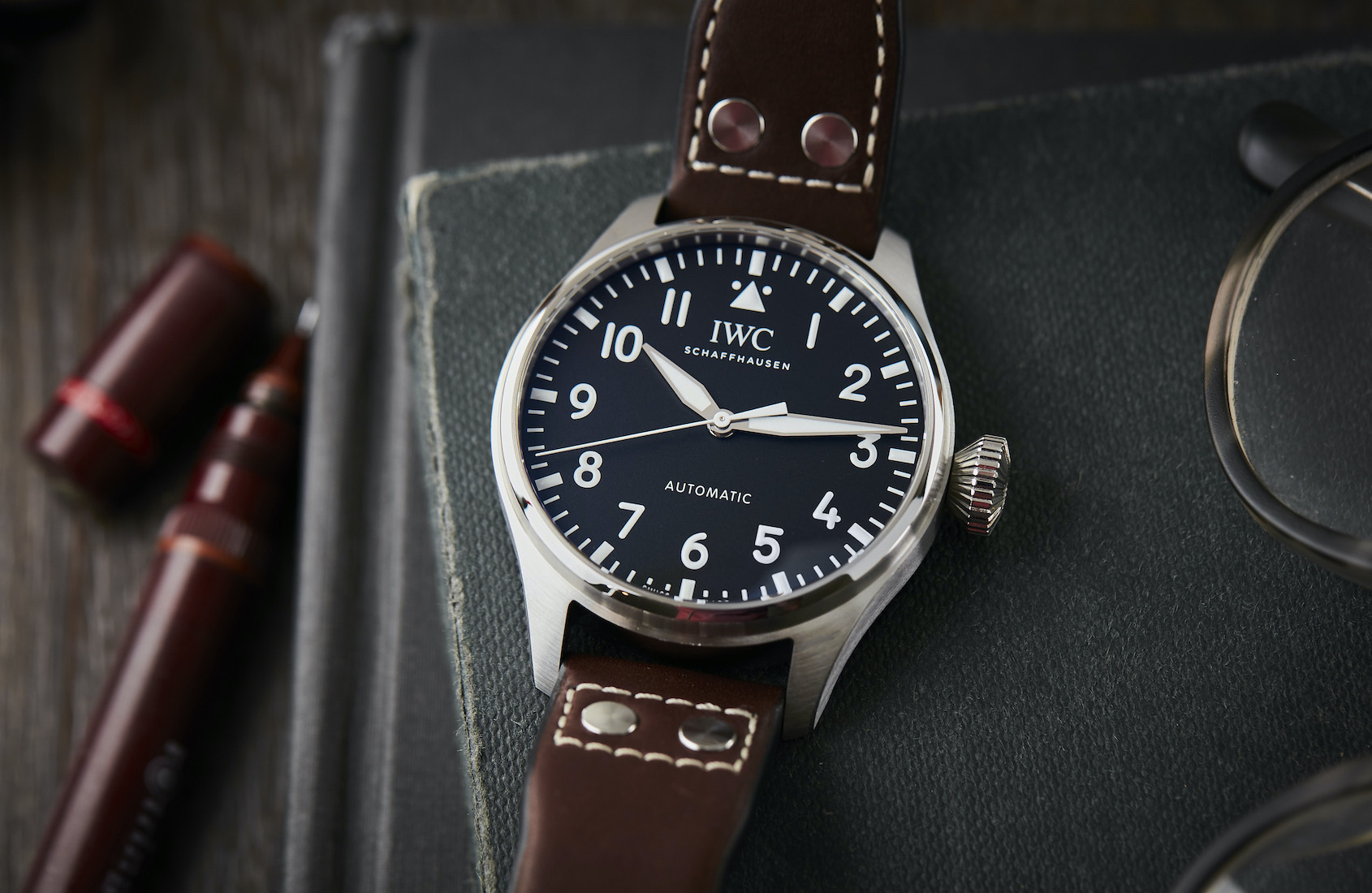 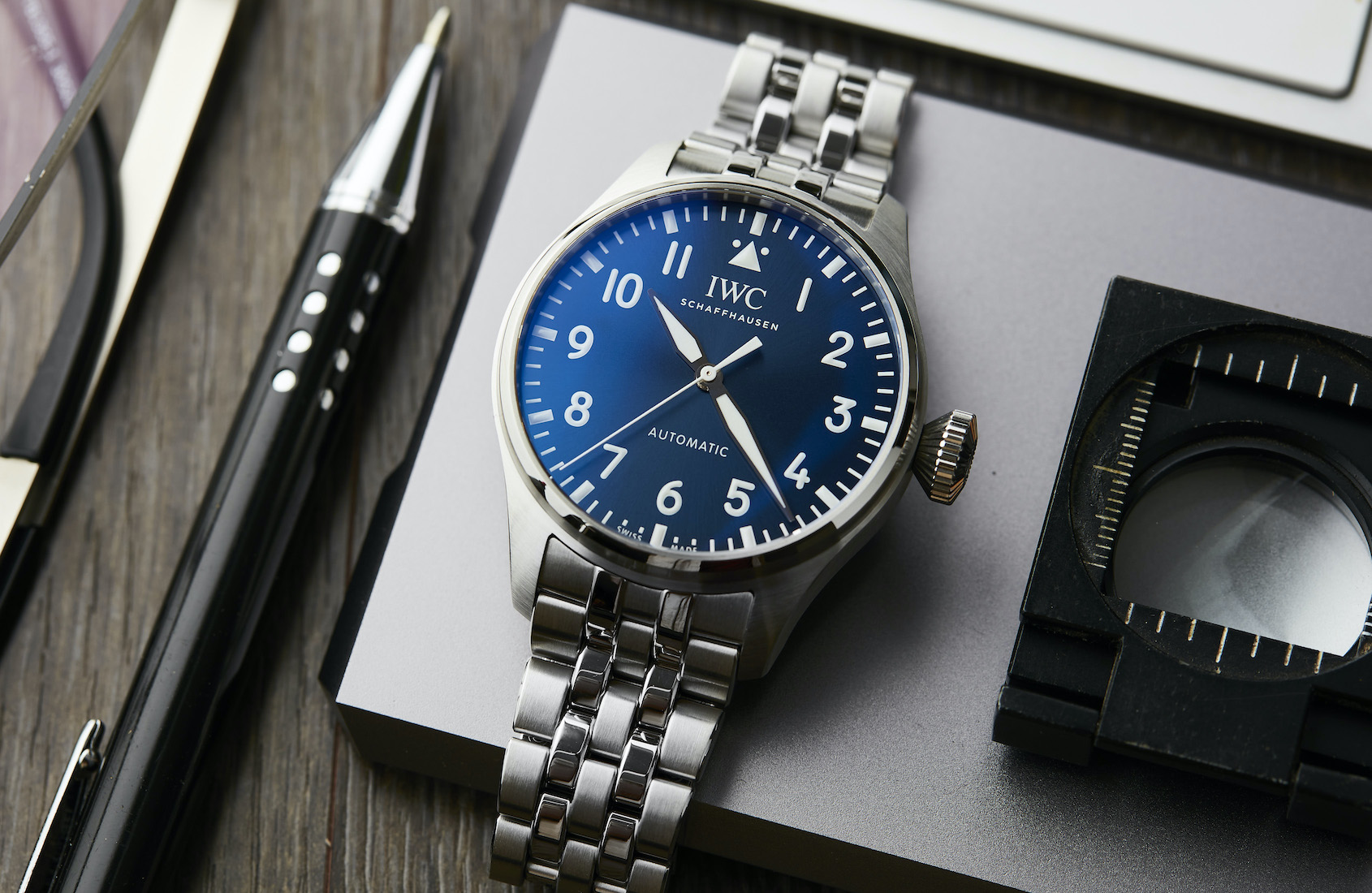 The second largest advantage of the IWC Big Pilot 43, aside from the increased water resistance, is the choice of three quick-change system straps: leather and rubber straps alongside a first ever metal bracelet to pair with a Big Pilot reference. Assuming you have all three to work with, you are able to seamlessly swap between the three with ease and can switch up the aesthetic and utility of the watch more than ever before. Taking a swim to test the new 100 meter depth rating, pair it with the rubber strap or metal bracelet. Looking to dress it up, or keep it closer to the familiarized aesthetic of the Big Pilot 46, swap in the leather to class things up. The beauty here at the end of the day is choice, whereas the Big Pilot 46 is only paired with a leather strap and 60 meter depth rating that may not encourage some to search for aftermarket rubber straps. 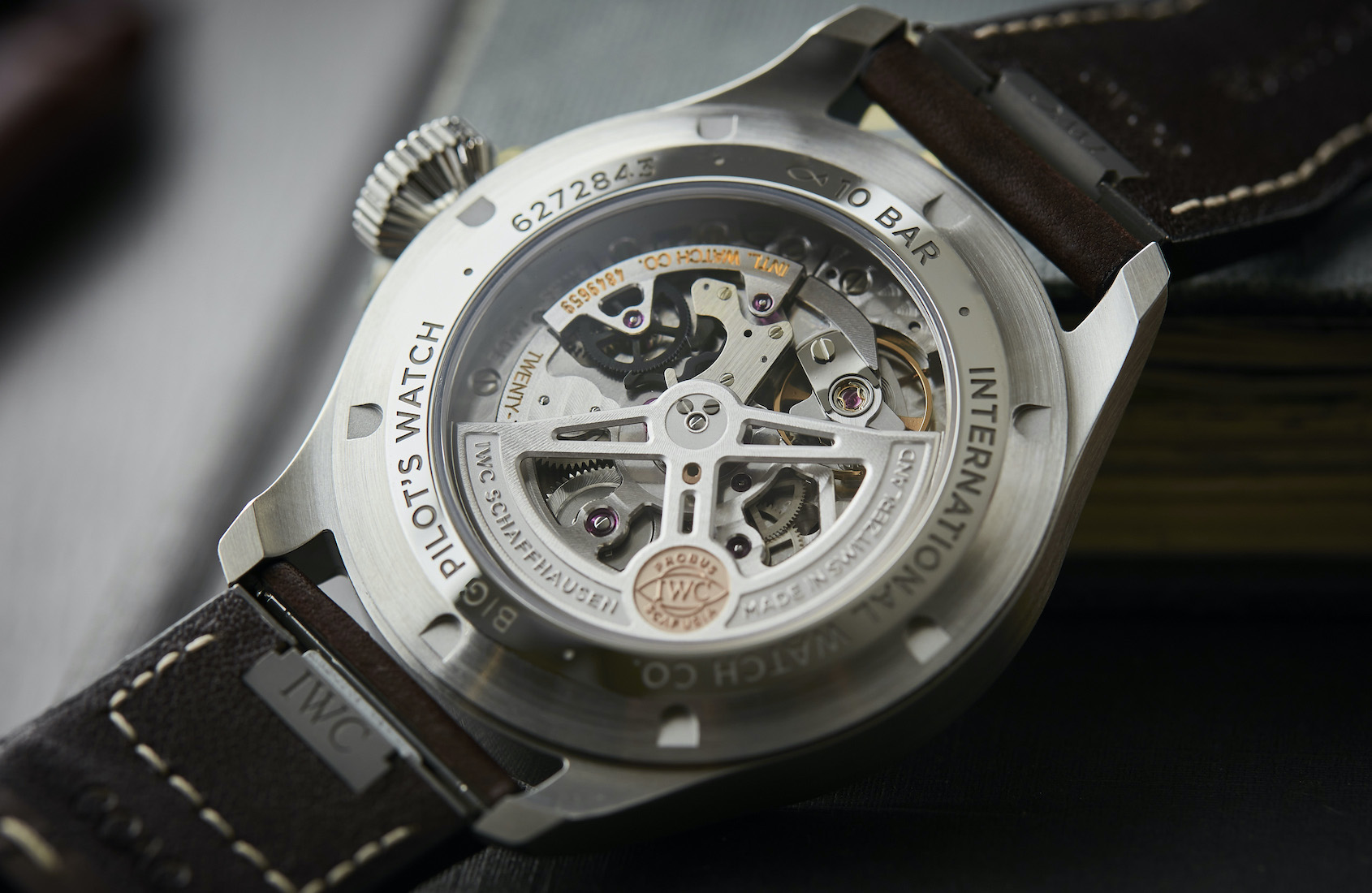 Both calibers, however, have the same beat rate of 28,800 vph and are each fitted with the highly efficient IWC Pellaton automatic winding system, which uses both directions of the rotor to wind the mainspring. IWC explains, “As in the IWC-manufactured 52000 calibre family, components in the [82000] system subject to pronounced stress, such as the pawls, the automatic wheel, or the cam, are made of ceramic. Thanks to the use of this high-tech material, they are virtually wear-free.” As mentioned earlier, while both calibers have been well decorated only the 82000 caliber is visible thanks to the sapphire caseback of the IWC Big Pilot 43. With a skeletonised rotor, the exhibition caseback offers a largely obstructed view of the movement decorated with circular graining and Geneva stripes. 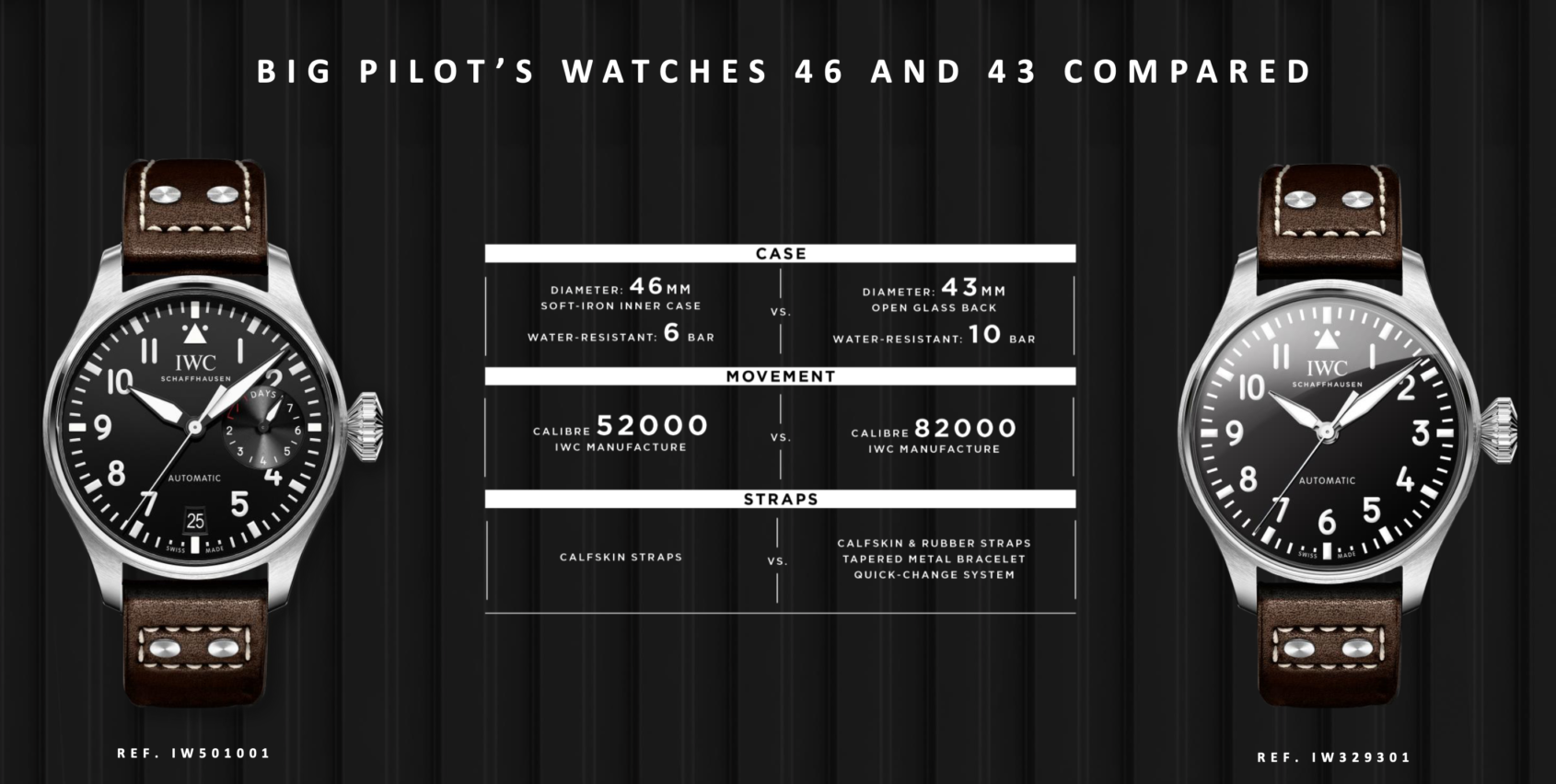 When I first discussed this release with my team, I noted that I felt something was missing – particularly the power reserve indicator that had captured my interest years ago as I was beginning my journey into watch enthusiasm and collecting. I also couldn’t help but wonder that, while I would love a Big Pilot that would suit my wrist, is a Big Pilot no longer a Big Pilot scaled down? It’s effectively the inverse of what I refer to as the modern Cartier Santos (and Tank) conundrum. While larger case sizes have been introduced to cater to the modern marketplace, my personal feeling is that anything larger than the medium no longer has the emotional essence of the original smaller references. But I must concede that 43mm is not much smaller than 46mm, and now knowing more about the origins of the Big Pilot I better understand the decision to introduce a clean and uncomplicated dial to the Big Pilot 43.

With the above questions in mind, I have come to the following conclusions. 43mm is still a large diameter, so I do not think the watch is undeserving of the Big Pilot name. Considering the original model was 55mm, it has already deviated largely from the original diameter – so to an extent that ship has sailed and for good reason. The only question that lingers is how this new 43mm size will translate into the marketplace. While I ultimately would have preferred a 40mm case that also included a power reserve indicator on the dial, due to my attachment to the modern aesthetic, I realize that what I am basically asking for is a IWC Mark watch with an onion crown. To scale that far down would, as I suggested earlier, destroy the essence of the Big Pilot – as it would no longer be big. To an extent this may be the medium option as you decide between the smaller Mark watches and larger Big Pilot 46. Perhaps this is the goldilocks solution buyers have been waiting for – and the new water resistance, metal bracelet, and quick-change system straps make the watch more versatile than ever. 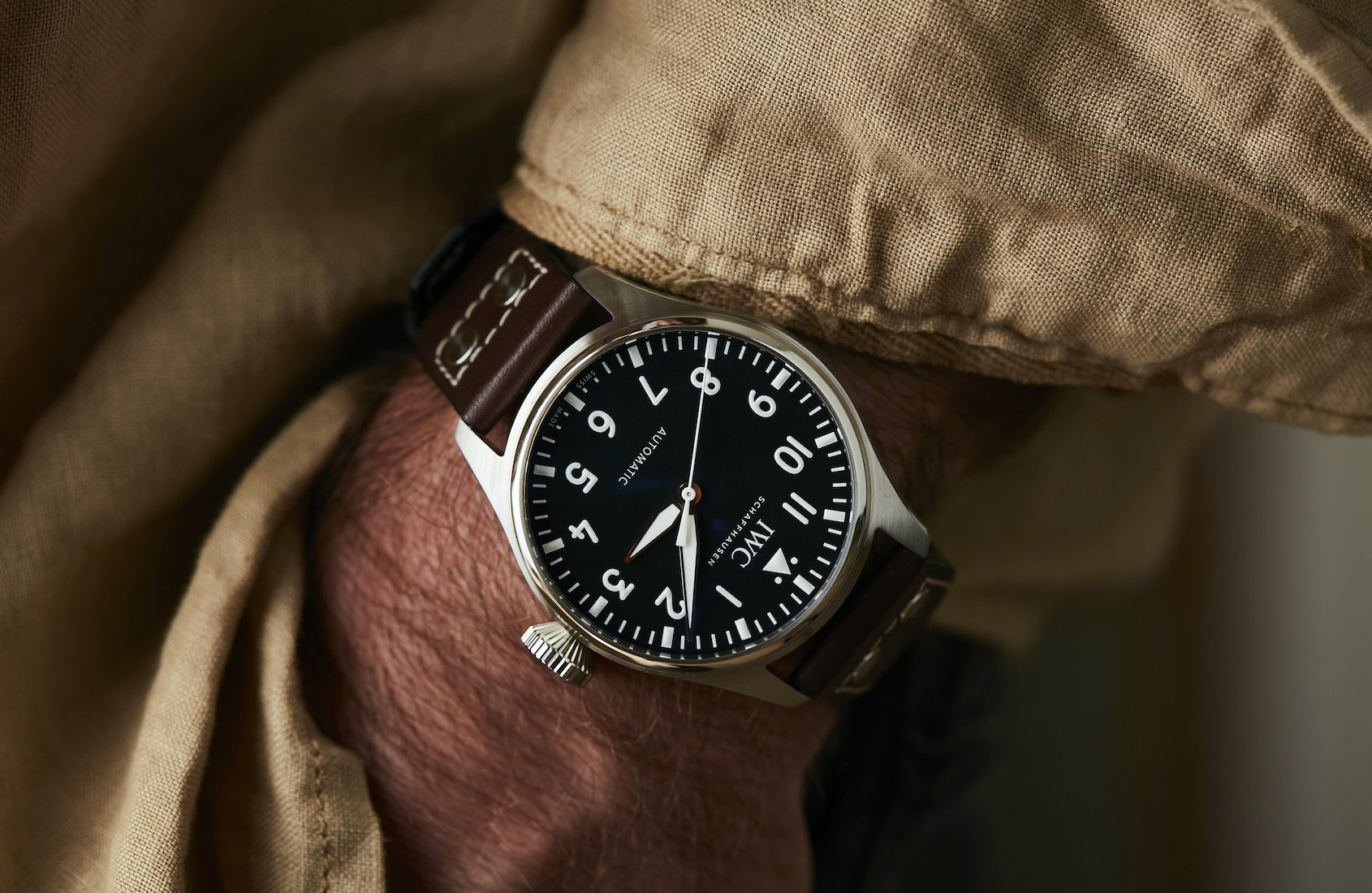 The IWC Big Pilot 43 will be available via IWC Boutiques and Authorized Dealers beginning in April 2021. Price: CHF 8,900 on leather and CHF 9,900 on the metal bracelet (pricing includes VAT).

Made in partnership with IWC. However, the opinions expressed in this article are our own in accordance with our Editorial Policy.