The market for stainless-steel watches with blue dials is as hot as ever. And it makes sense for brands to produce watches that meet this demand. But how many more do we really need? The Grand Seiko SBGR321 was first announced towards the end of last year as a part of their 60th anniversary releases, and I finally had the opportunity to spend some time with it in the metal recently. It certainly ticks all the boxes that the market wants: a stainless-steel case and bracelet, a 40mm diameter and, of course, an attractive blue dial. But how much does it really add to the horological landscape? And have Grand Seiko done enough to stick out from the blue steel crowd? 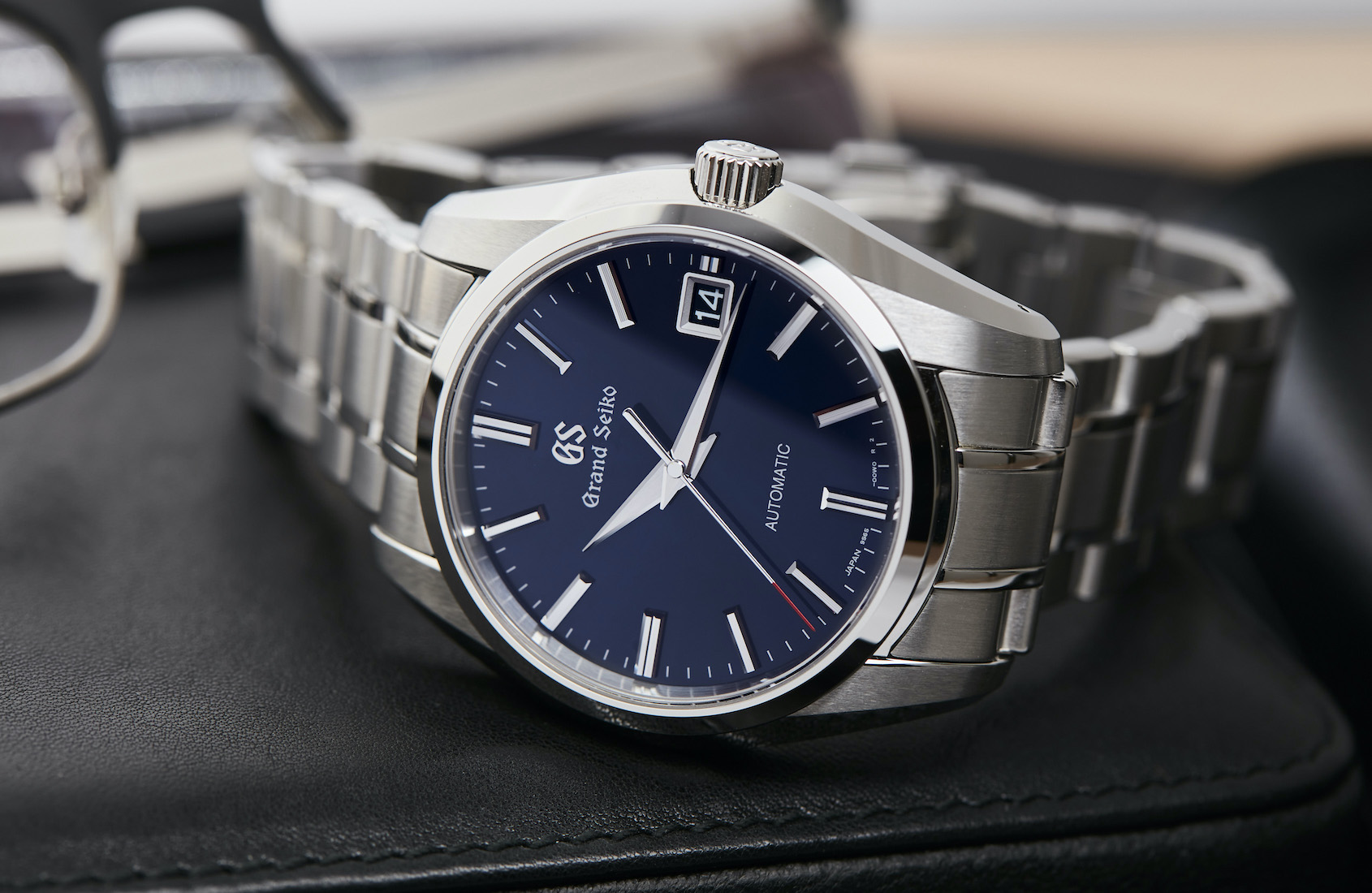 The Grand Seiko SBGR321 is a part of the brand’s Heritage collection and clearly flaunts the case to match. Inspired by Grand Seiko designs of the past, the 40mm stainless-steel case features sloping flanks and lines so sharp you’re drawn to inspect them up close. The case lines are articulated clearly thanks to the even vertical brushing on the tops of the lugs and the contrasting Zaratsu-polished case sides. This contrast accentuates the visual impression of the case being softly curvaceous. 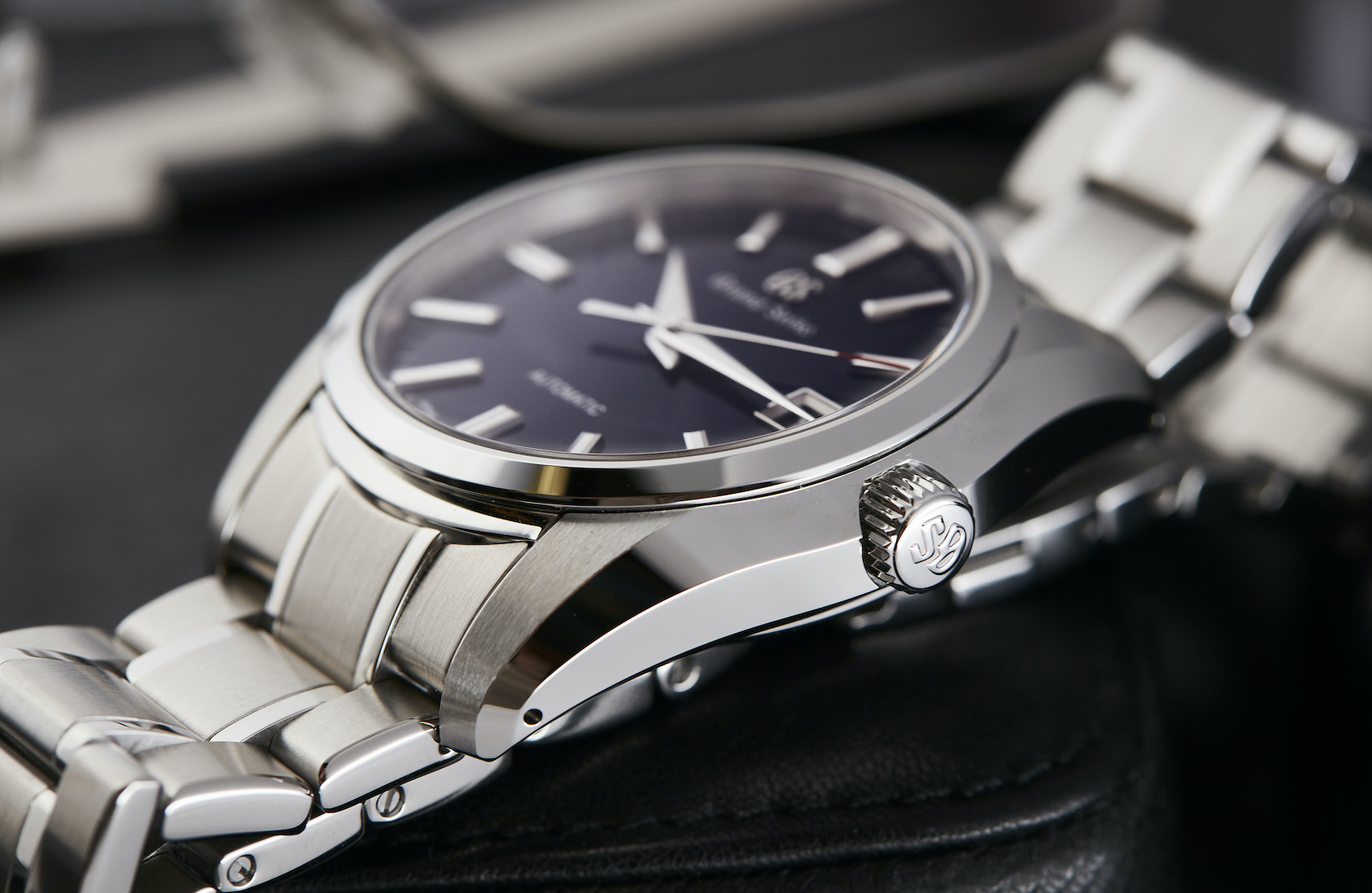 Sitting 13mm thick, this isn’t an example of ultra-thin watchmaking, but offers enough presence without being bulky. Additionally, as you might expect from Grand Seiko, the thickness of the case is in part a function of allowing the movement inside to be robustly protected against any impact it might experience, ensuring the accuracy of the timekeeping isn’t affected by day-to-day knocks. 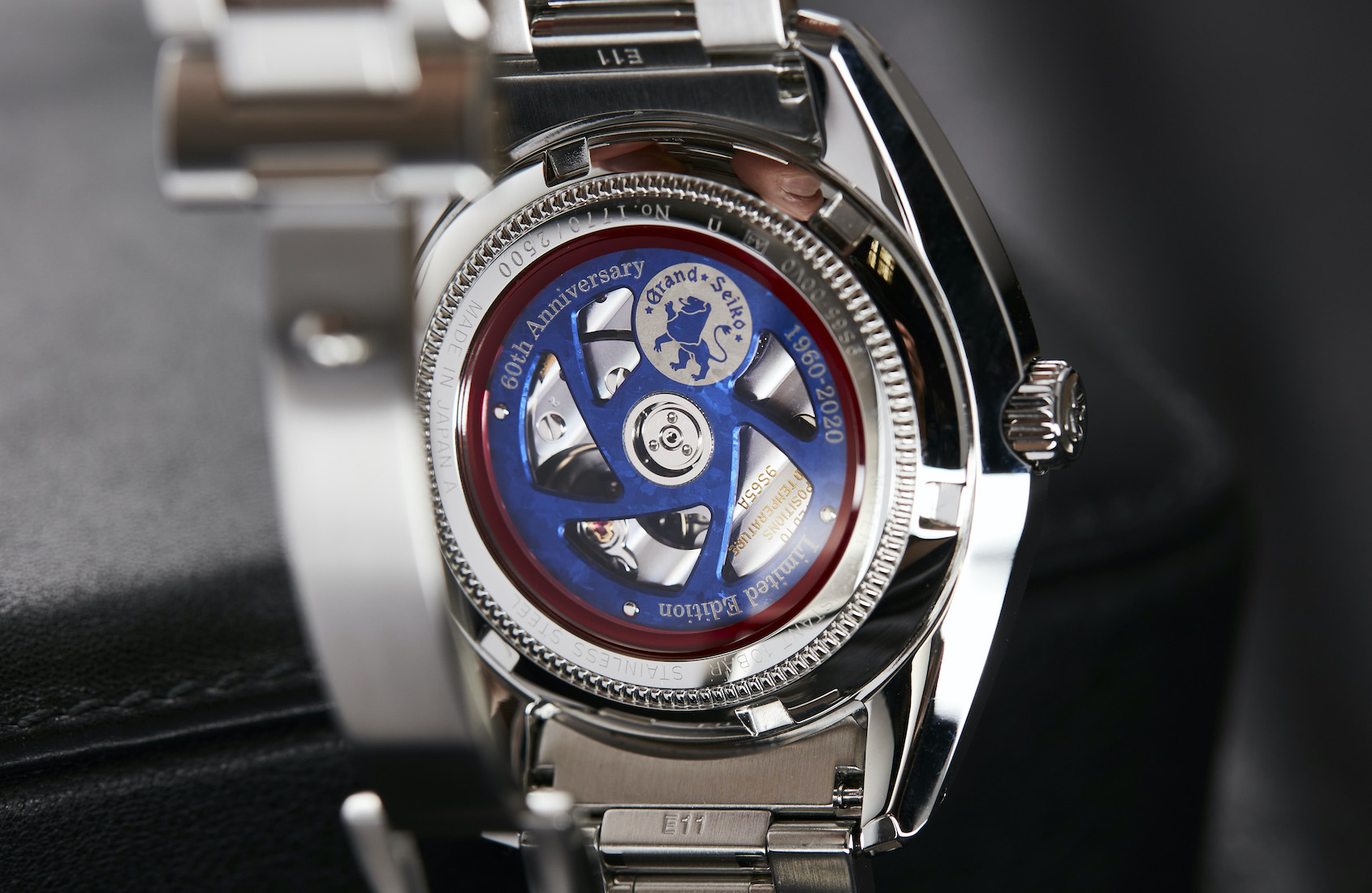 The crown is also integrated slightly into the side of the case to protect it against shocks, and screws down for 100m of water resistance. The caseback is also screw down, and features an exhibition caseback for a crystal-clear view of the movement within. 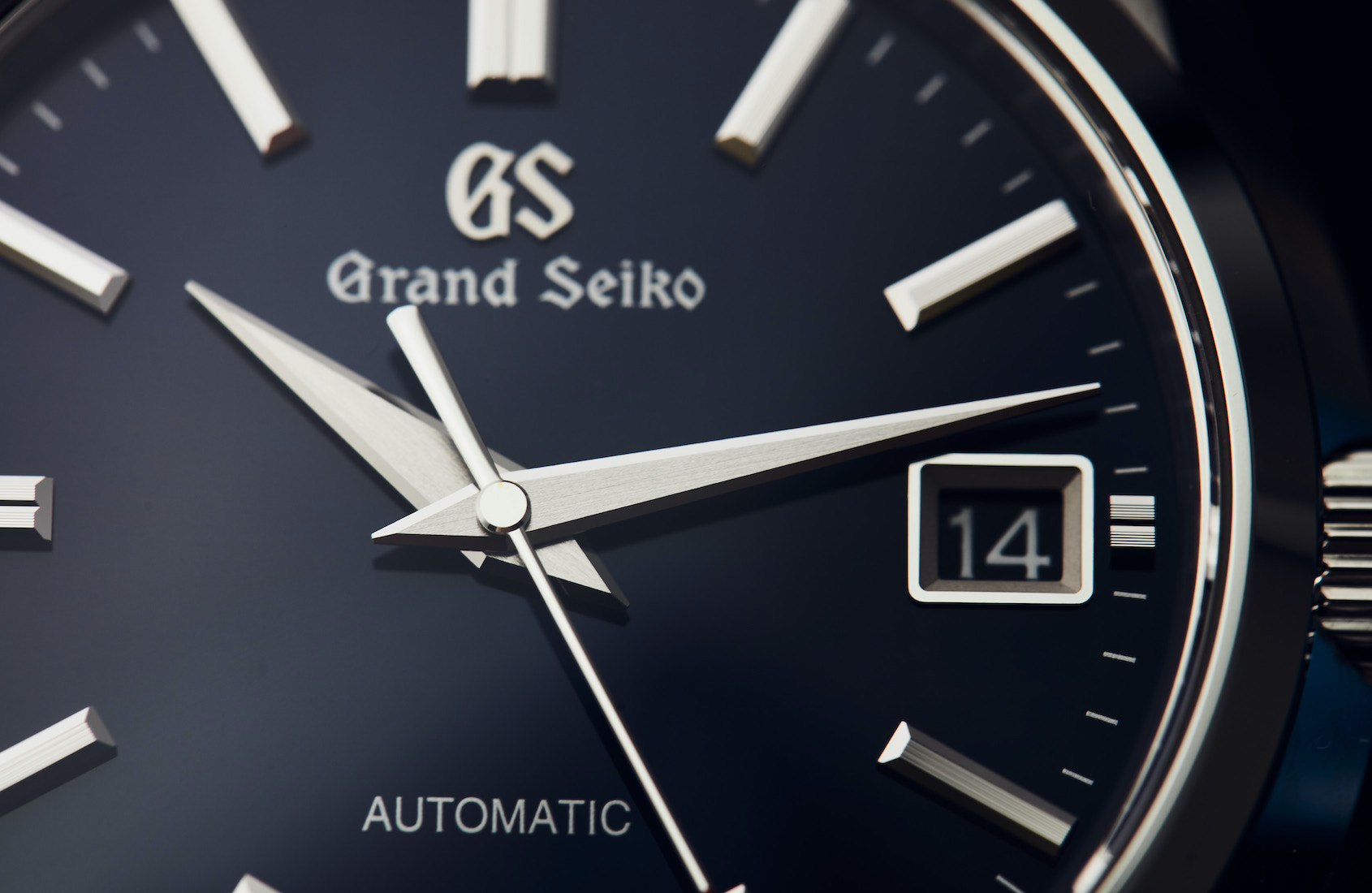 The dial offers that characteristic Grand Seiko experience: the mandatory double-take. At first glance in low lighting, you might even be forgiven for thinking the dial was black, but on closer inspection you find that the depth of the blue tone is one that needs sunlight to be properly appreciated. 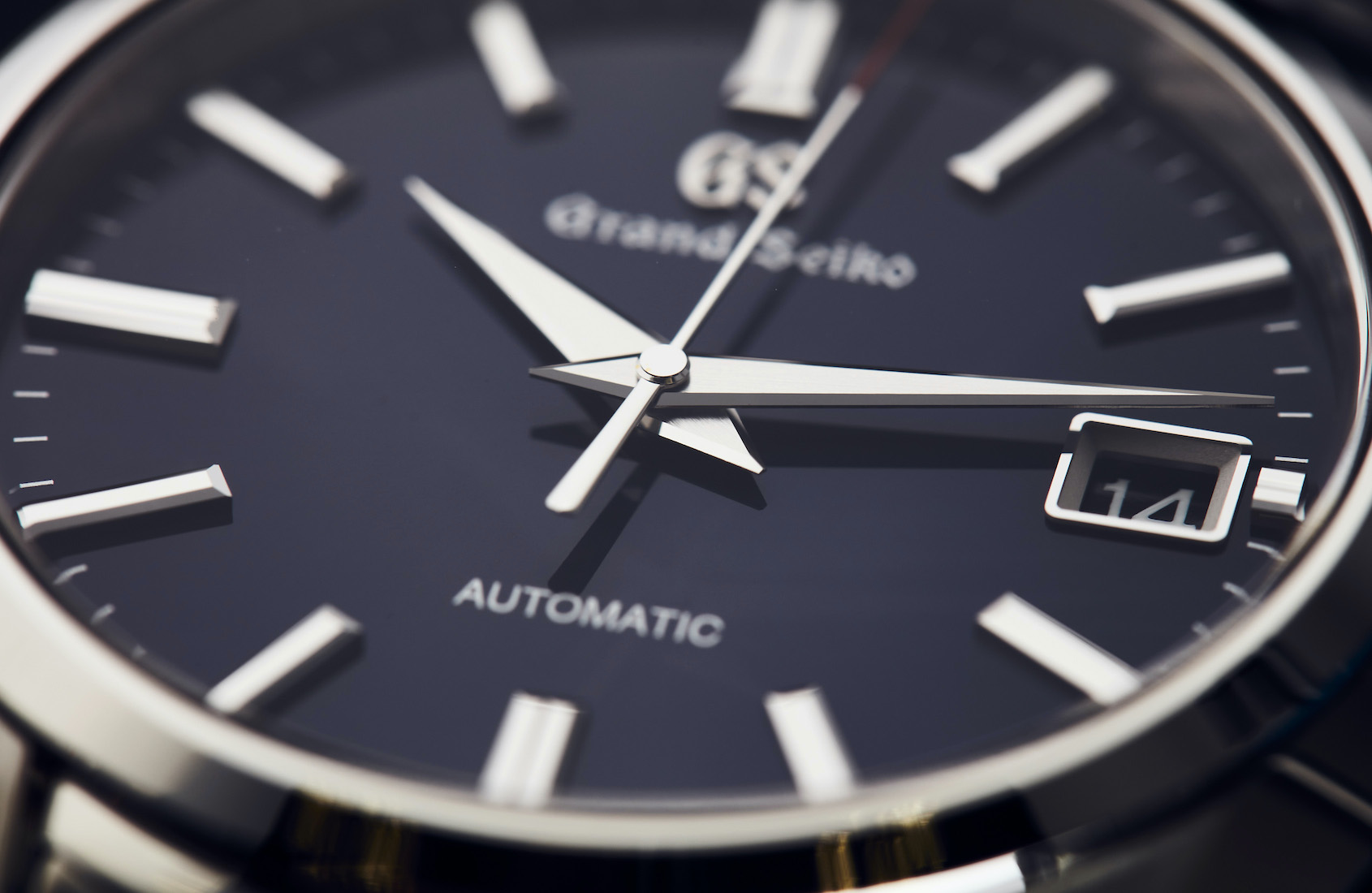 The tone ranges from dark navy all the way to a light shade of sapphire and features a sunburst finish that dances in the light. The only dial text to speak of is the printed word AUTOMATIC at the bottom of the dial and GRAND SEIKO at its top. The hour markers, GS logo and the frame of the date window are all applied, and have the frankly remarkable level of finishing that we have come to expect from the Japanese watchmaker. 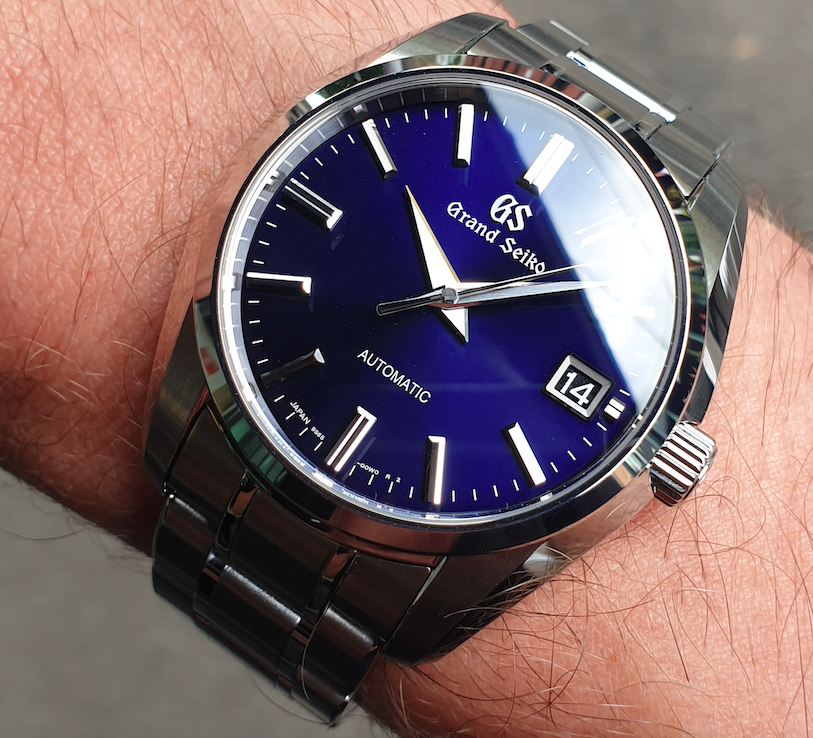 The dauphine hands are quintessential Grand Seiko, from the mirror polished facets to the microscopically squared-off tips, while the seconds hand has a red tip to identify it as a member of the 60th anniversary limited-edition references. 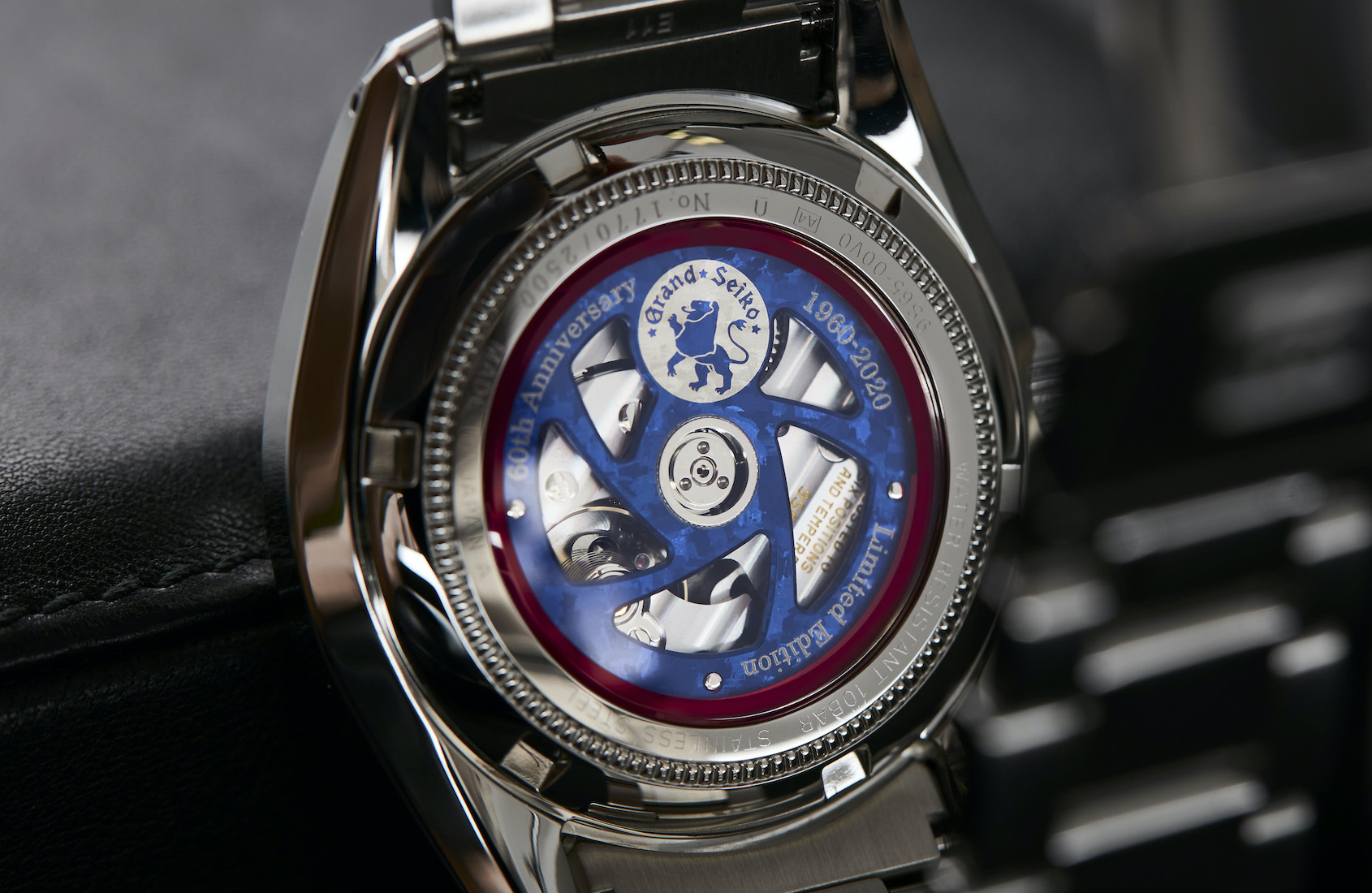 Grand Seiko describes the 9S65 caliber as “the most standard automatic movement that typifies the 9S mechanical series” but at first glance you really wonder if the word “standard” is correct. In fact, to be blunt, it looks exceptional, thanks to the remarkable, almost geological effect that has been applied to the rotor. The blue tone is thanks to an anodic oxidation process that creates a film over the material, the thickness of which is precisely determined to ensure the specific colour we see here. It doesn’t sound very standard to me, that’s for sure. 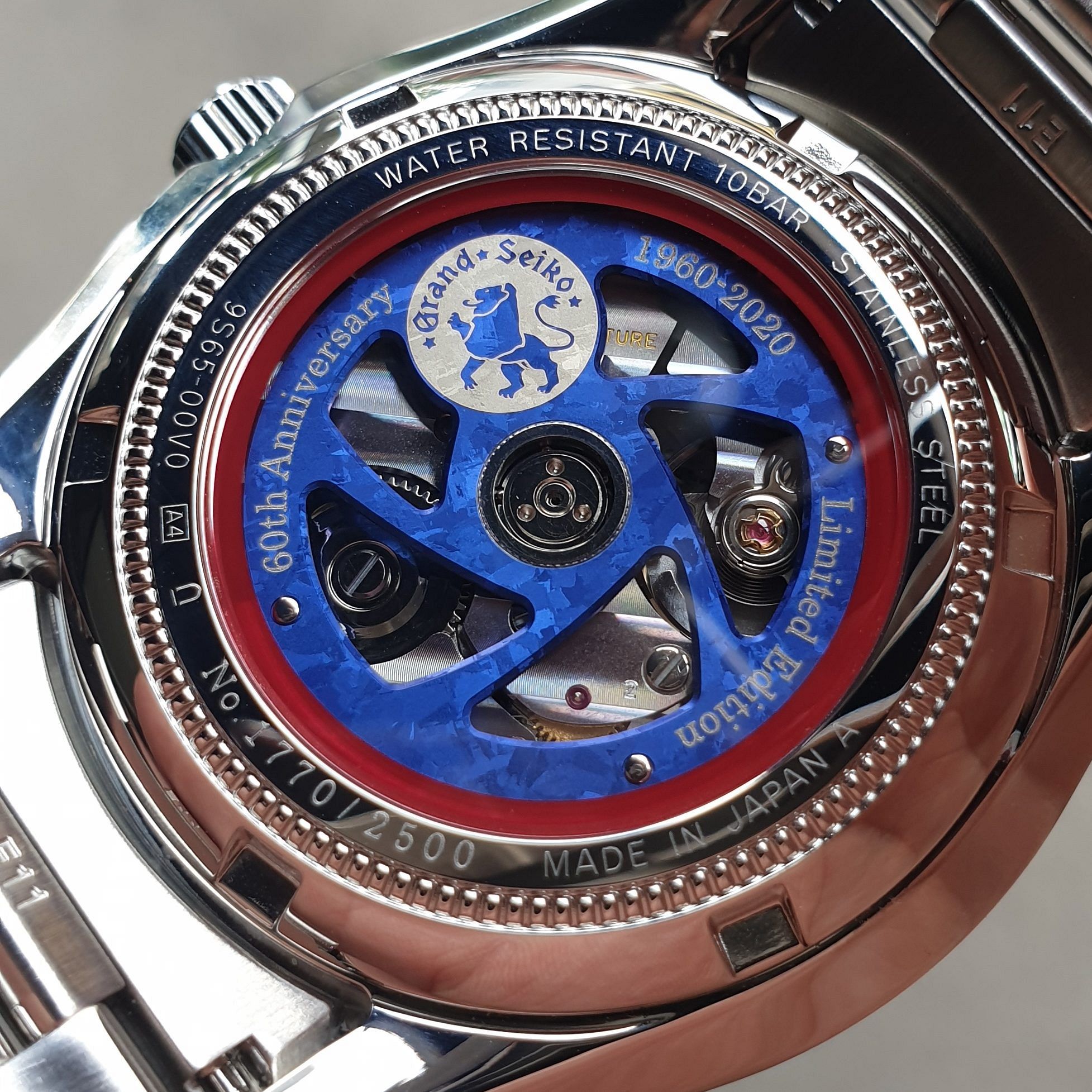 Behind the hypnotic blue rotor, the 9S65 caliber runs at 28,800vph, boasts a full 72 hours of power reserve and is accurate to +10 to -1 seconds per day during normal usage. Though I’d take those numbers with a grain of salt. Anecdotally it is relatively unusual for Grand Seiko movements to hit the outside limits of their accuracy ratings – they often perform to within less than a handful of seconds per day. 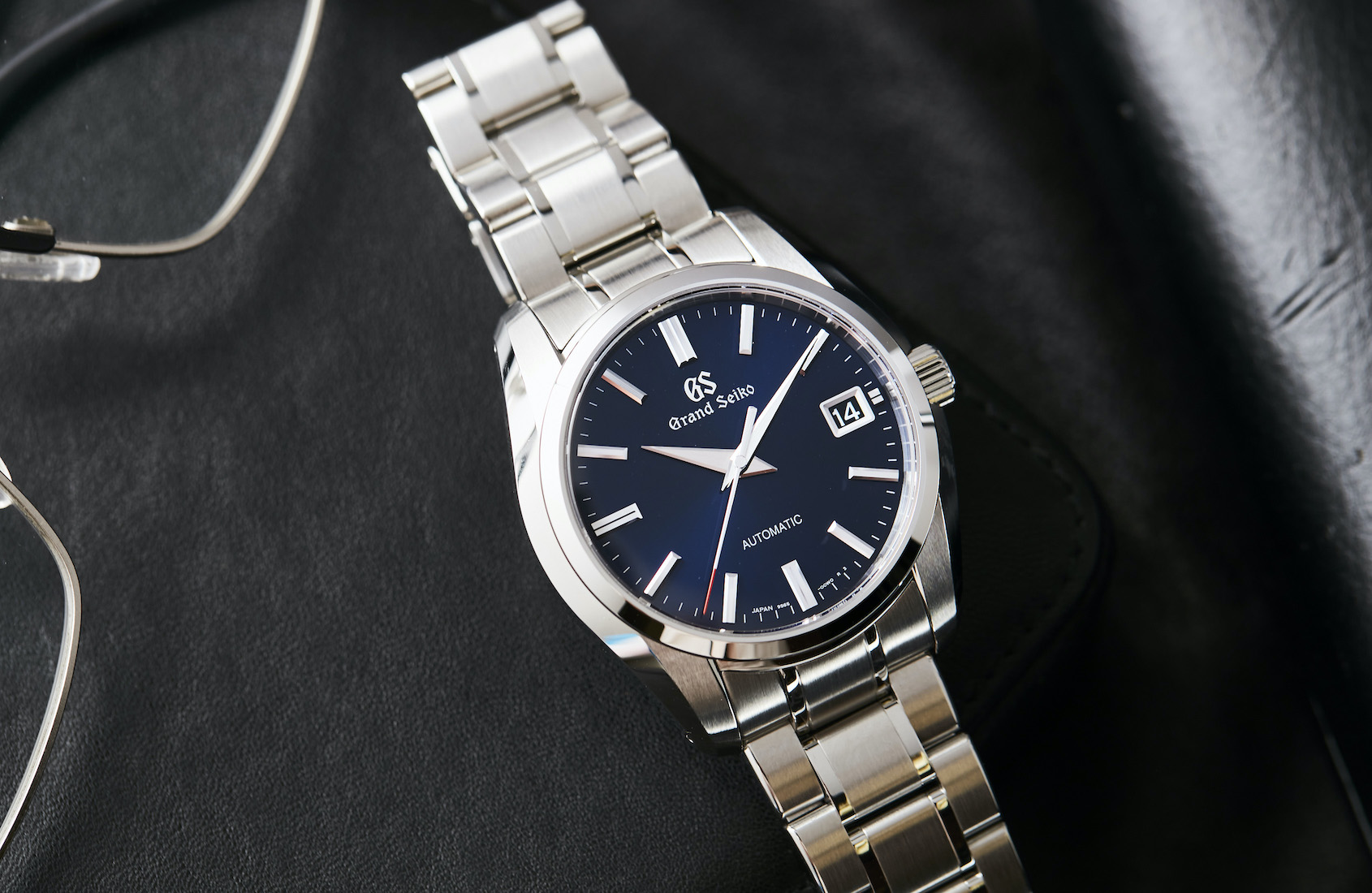 Just like the case, the stainless-steel bracelet features the same level of brushed and polished finishes that make it stand out just the right amount on the wrist. The three-link bracelet features two rows of polished sections on the outsides of the inner link, making it visually very distinct from any other three link bracelets on the market. It is secured with a folding clasp that is opened and closed with a twin-button release. 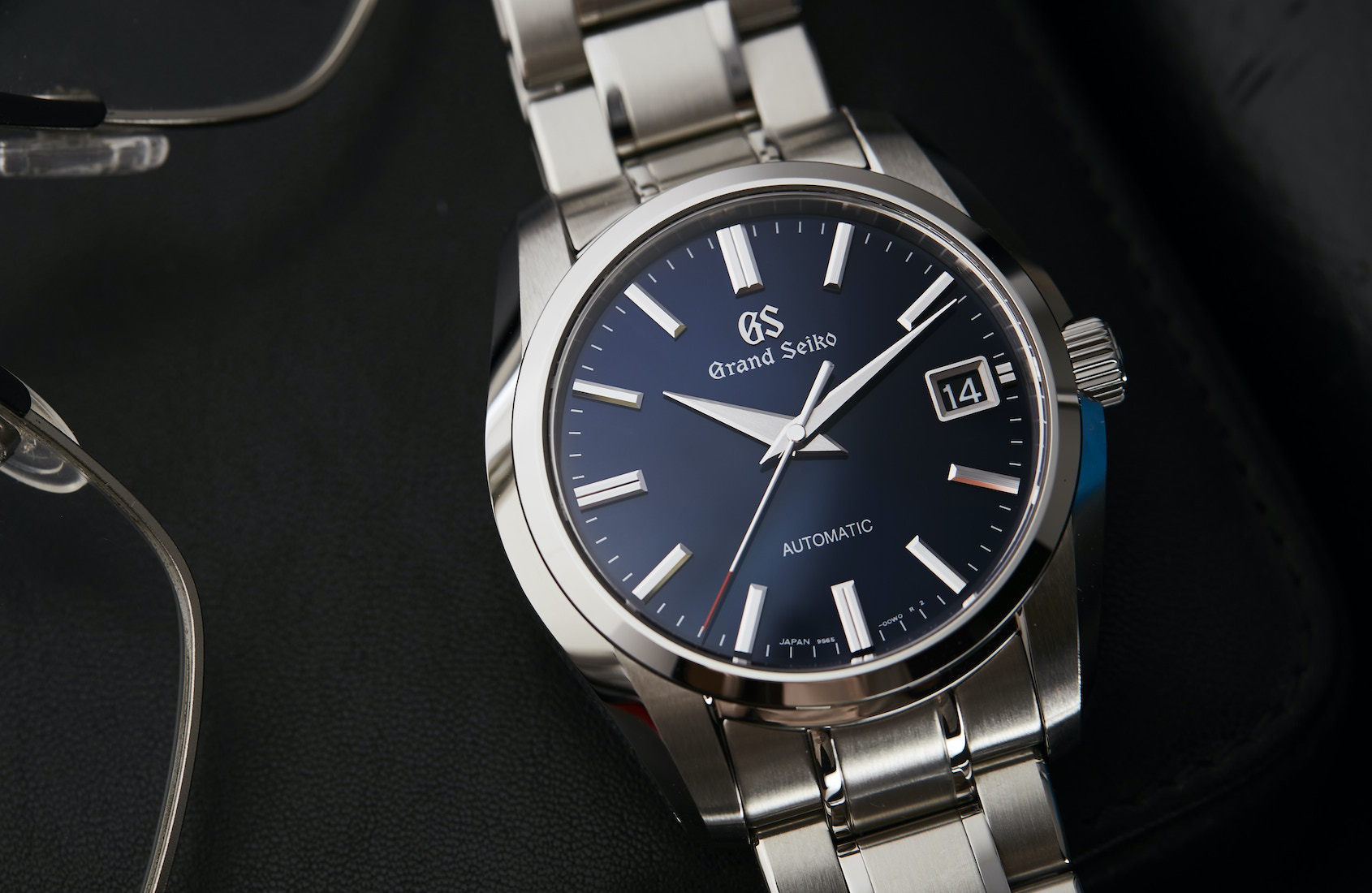 Has Grand Seiko added anything to the crowded market of stainless-steel watches with blue dials? Unequivocally the answer has to be yes, on two fronts. Firstly, the Grand Seiko SBGR321 throws a very heavy pound-for-pound punch against the rest of its competitive set, as a watch that is attractive from any angle you care to look at it. The dimensions, the movement and, of course, the finishing all tell a very compelling story to your hand as it reaches for your wallet.

Secondly, nothing of the Grand Seiko ethos has been lost in the production of a watch that might have looked very similar to many other watches that are already available. It isn’t aggressively sporty, it maintains a poised balance in its design and the closer you look, the better things get. These are traits you are likely to find time and time again across the current Grand Seiko collection, but not necessarily things you would expect to find in another stainless-steel watch with a blue dial. In fact, the case material and dial colour are almost incidental in the context of the other elements that make this such a well-executed wristwatch. 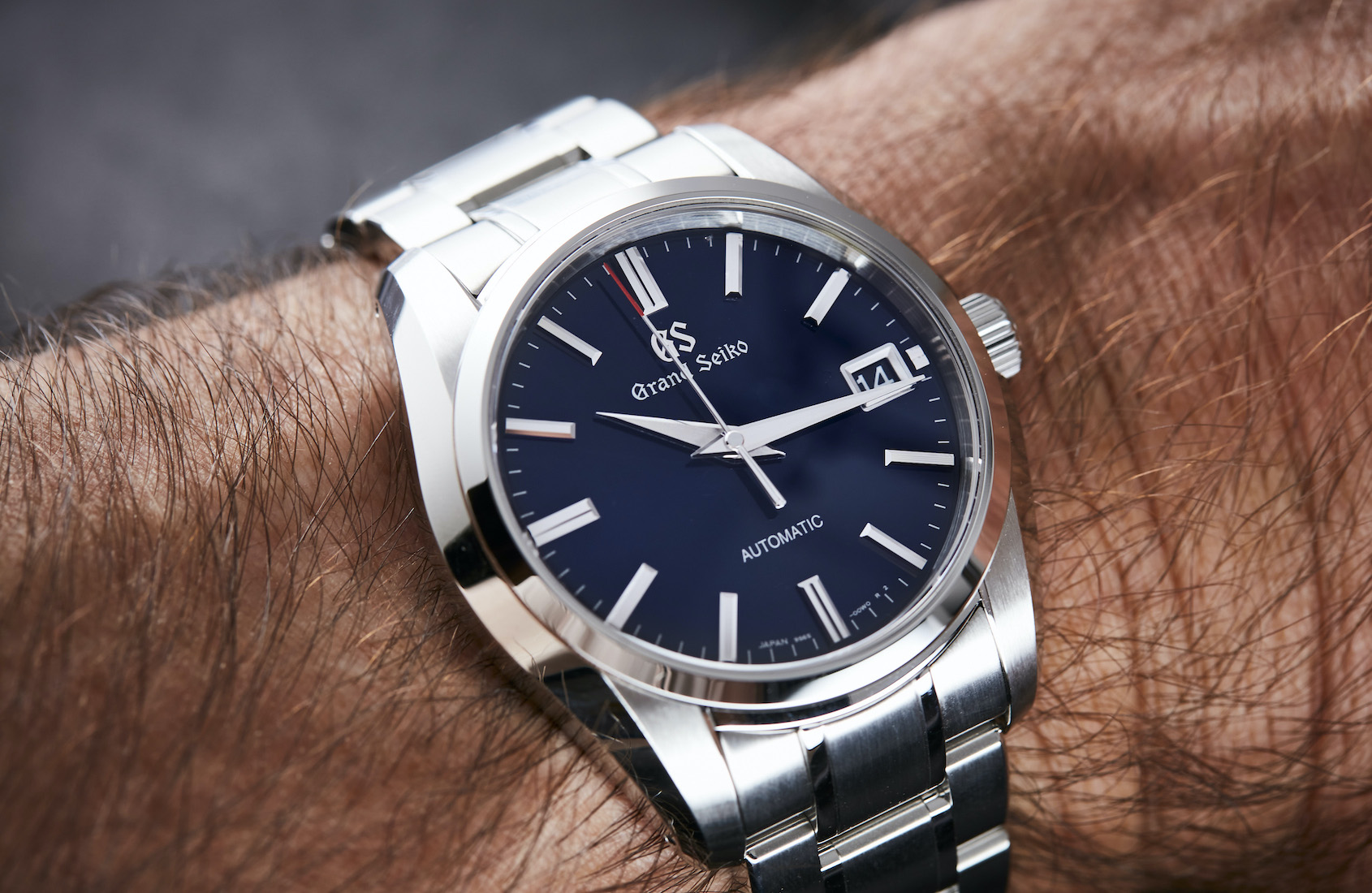