Agenhor, and the many movements of the Genevan complication masters (Part 1)

There are not many movement manufacturers nor watch brands that can lay claim to a staggering 9 GPHG awards, though Agenhor is one of them. Sure, the GPHG awards are like the Oscars in some ways – somewhat exclusive and at times certainly controversial – but they, for the most part, represent the crème de la crème of watchmaking. The recognition all began in 2007 with the inaugural prize for Best Watchmaker, though the history of Agenhor movements stretches much further than that.

The name Agenhor is an acronym, standing for Atelier Genevois d’Horlogerie, founded in 1996 by Jean-Marc and Catherine Wiederrecht, now led by their sons Nicolas and Laurent. This was not a first foray into high-end watchmaking for Jean-Marc Wiederrecht, however, as he created the first-ever bi-retrograde perpetual calendar for Harry Winston. Today, the company is widely known for their work on the Harry Winston Opus series, their collaborations with the likes of MB&F, Arnold & Son and H. Moser & Cie, and of course, the AgenGraphe chronograph. Some Agenhor movements can be as deceptively simple like the Fabergé Visonnaire DTZ and others ridiculously complex like the brand’s Van Cleef & Arpels automata. There’s a lot of watches and other horological creations under the brand’s belt, so I’ll only explore some now (part 2 is imminent).

The True North Perpetual by Arnold & Son combines some incredible complications in a 45mm gold case. The movement is a three-way combined collaborative effort. Eric A. Loth of Arnold & Son, who created the Arnold & Son Longitude, had the idea for this piece, Jaquet made the base seven-day power reserve movement, and, of course, Agenhor. Their involvement comes in the form of special toothing. The first is elastic toothing, allowing some movement in their engagement, eliminating any hand jittering. The second technology, patented by Agenhor, is a three-level going train comprising an interior toothing. The complications are plentiful and marked some firsts, including all of the following – the first watch capable of indicating true solar time and true geographical north in a particular location, perpetual calendar pre-programmed until 2100, 29.5-day lunar cycle moonphase and calculation-free equation du temps.

Fabergé and Agenhor certainly have a healthy relationship, the latter creating a number of movements for the former, including the first-ever appearance of the AgenGraphe. The Visionnaire DTZ, however, appears a lot more simple than it really is. At first glance, it’s a two-hander with no running seconds. Look closer, however, and you’ll notice that the central aperture, and its porthole-like appearance, feature this piece’s second time zone. Indicated as a jumping hour with a 24-hour scale, there’s no need for a day/night indicator either, with the pusher at 10 o’clock advancing the time.

The rear view of the automatic movement is unusual, too. The large skeletonised disc sitting above the top right quarter of the movement carries the numerals, and is what you actually see from the dial side, except the numbers are magnified by a large lens. You may wonder where the hell the rotor is, as there’s none in sight, not even of the micro kind. Those more familiar with Agenhor’s work would have remembered that the brand likes to hide it beneath the dial, in this case making it visible dialside when the watch is in motion.

The watch that brought more mainstream attention to Agenhor than any before was certainly the H. Moser & Cie Streamliner Flyback Chronograph. Released in 2020, this retro-futuristic take on an integrated bracelet sports watch, proved a success for the brand. Apart from the marvellous case finishing and scalloped bracelet, it was the AgenGraphe chronograph movement that powers it that caught my attention.  Apart from quirky touches like the Batman-shaped bridge holding the wheels of the central chronograph assembly, the movement features numerous developments that make it a hugely significant chronograph. 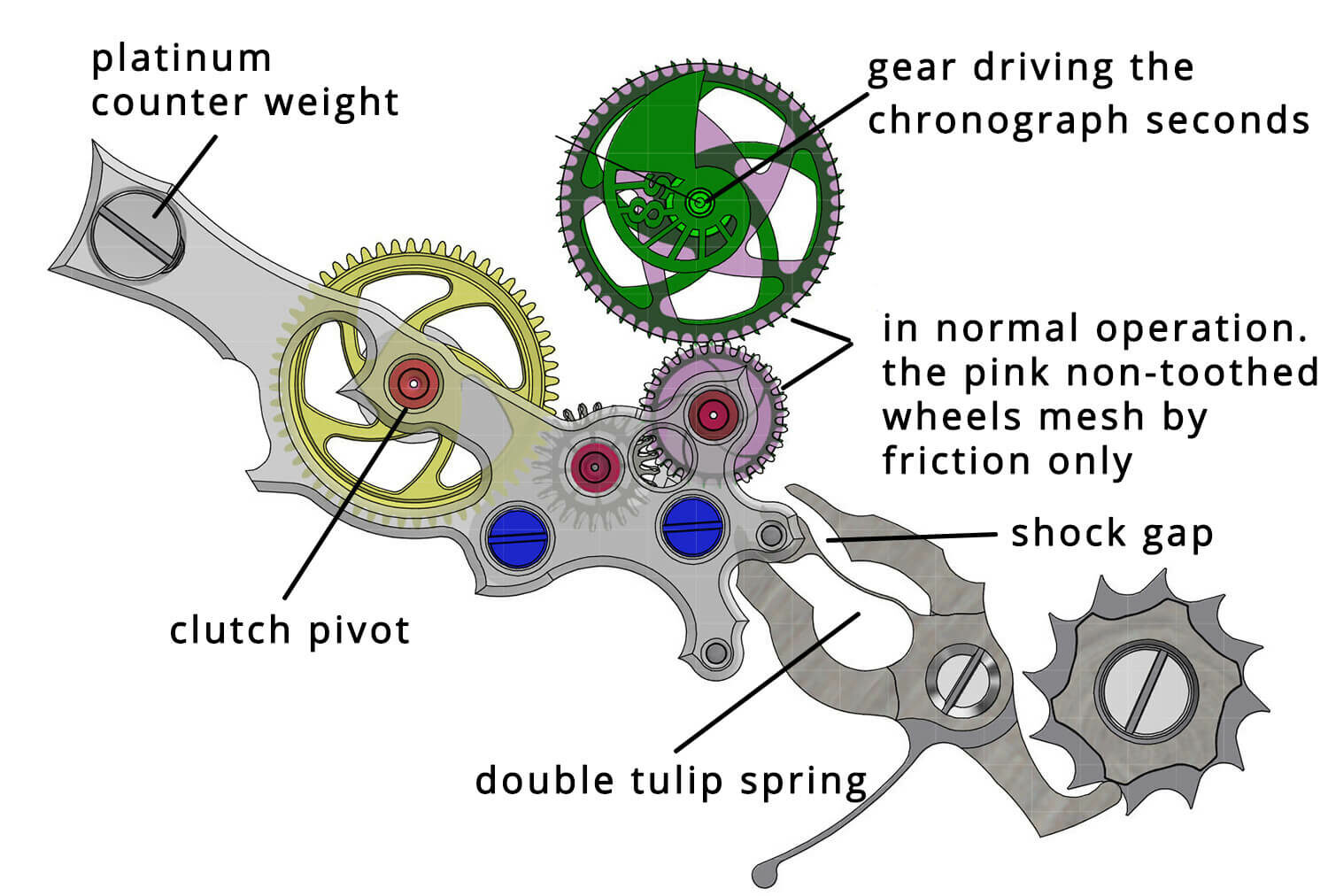 The most important change is in the operation of the chronograph, beginning with the patented AgenClutch. It requires little pressure to activate, engaging two tooth-free wheels by friction only, while additional toothed wheels ensuring engagement in case of shock, without damage due to a double tulip spring. There are more awesome developments in the AgenGraphe, enough to fill a whole separate article. Huh – there’s an idea.

From F.P. Journe’s Opus 1 to the mad, jukebox-like Opus 14 (the last in the series, for now), Harry Winston’s Opus series served as the proving ground for the world’s best watchmakers, doing what they do best, starting in 2001. The Opus 9, vastly different from those that came before, was awarded the design watch prize at the 2009 edition of the GPHG, for the chain-driven design by Jean-Marc Wiederrecht and Eric Giroud. The watches used two Harry Winston gem-set chains to show the hours and minutes, running parallel to each other, all based on a hand-wound Frédéric Piguet movement. 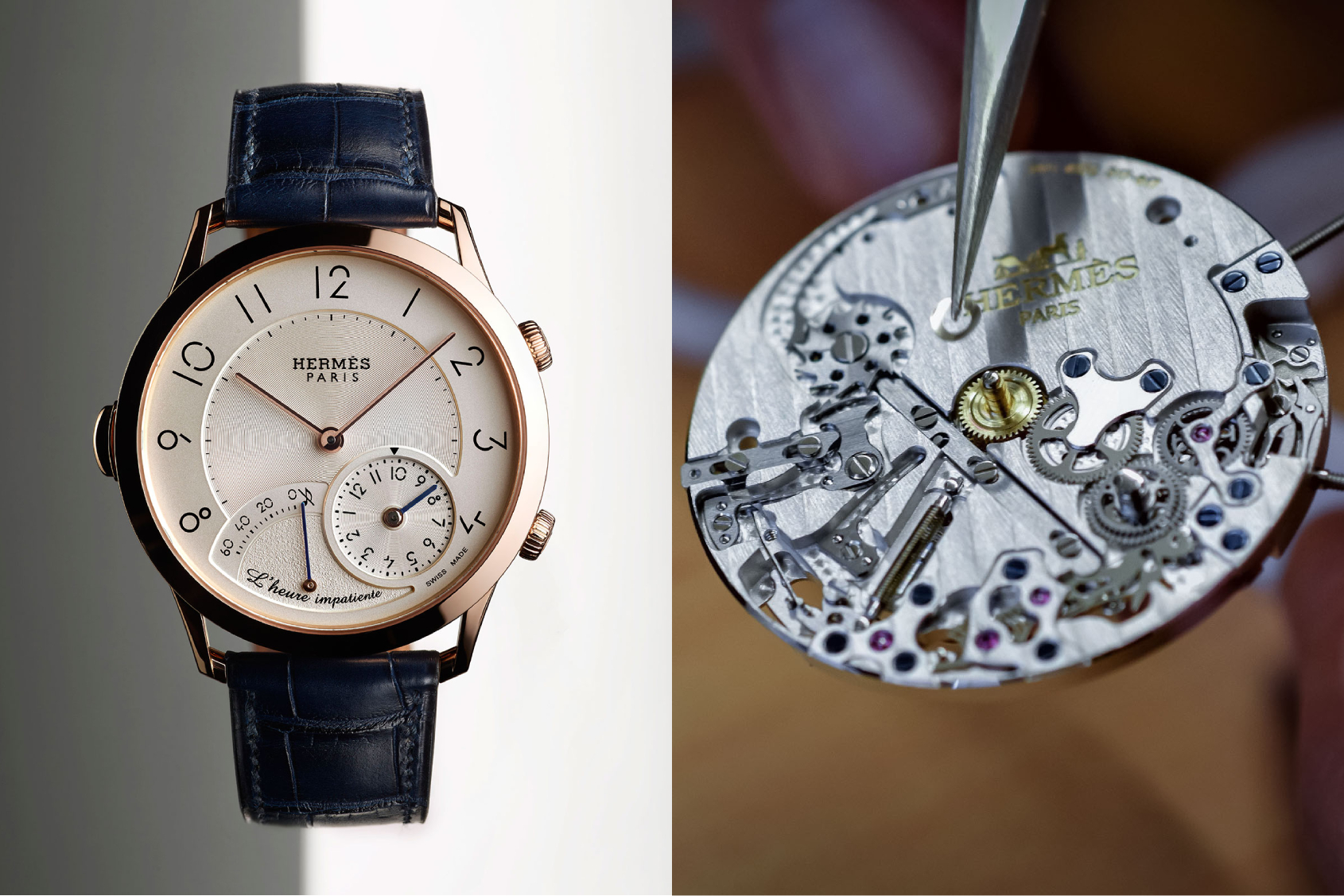 Very much a Slim d’Hermès in style, the L’Heure Impatiente has the slim lugs and unique typeface we’ve come to expect from the collection. The movement, however, hides some Agenhor magic. It’s not the only time the two brands have worked together, collaborating on the Temps Suspendu, Slim Perpetual Calendar and Slim GMT. If you’re forgetful and could use a gentle reminder, the L’Heure Impatiente may just be for you. Rather than the harsh, buzzing sounds of mechanical alarms, the Hermès’ movement can be set to remind you of a particular time of day with a single chime, indicated by the 5 o’clock subdial. The watch also includes a retrograde 60-minute countdown timer at 6 o’clock.