In 2020, Grand Seiko debuted the T0 constant force tourbillon movement, a concept caliber that, at the time, was a total tease for collectors of the brand worldwide. While many were begging Grand Seiko to realise it in a production watch as is, the reality was that Grand Seiko felt the work was not completely done. Grand Seiko’s grammar of design dictates the boxes all production watches must tick, and the T0 didn’t pass in its current form. This left Grand Seiko fans wondering when the brand’s first high complication would make its debut. So, when the Grand Seiko SLGT003 “Kodo” made its debut at Watches & Wonders it was definitely a drop the mic moment – a complete show stealer all in attendance were lusting over. 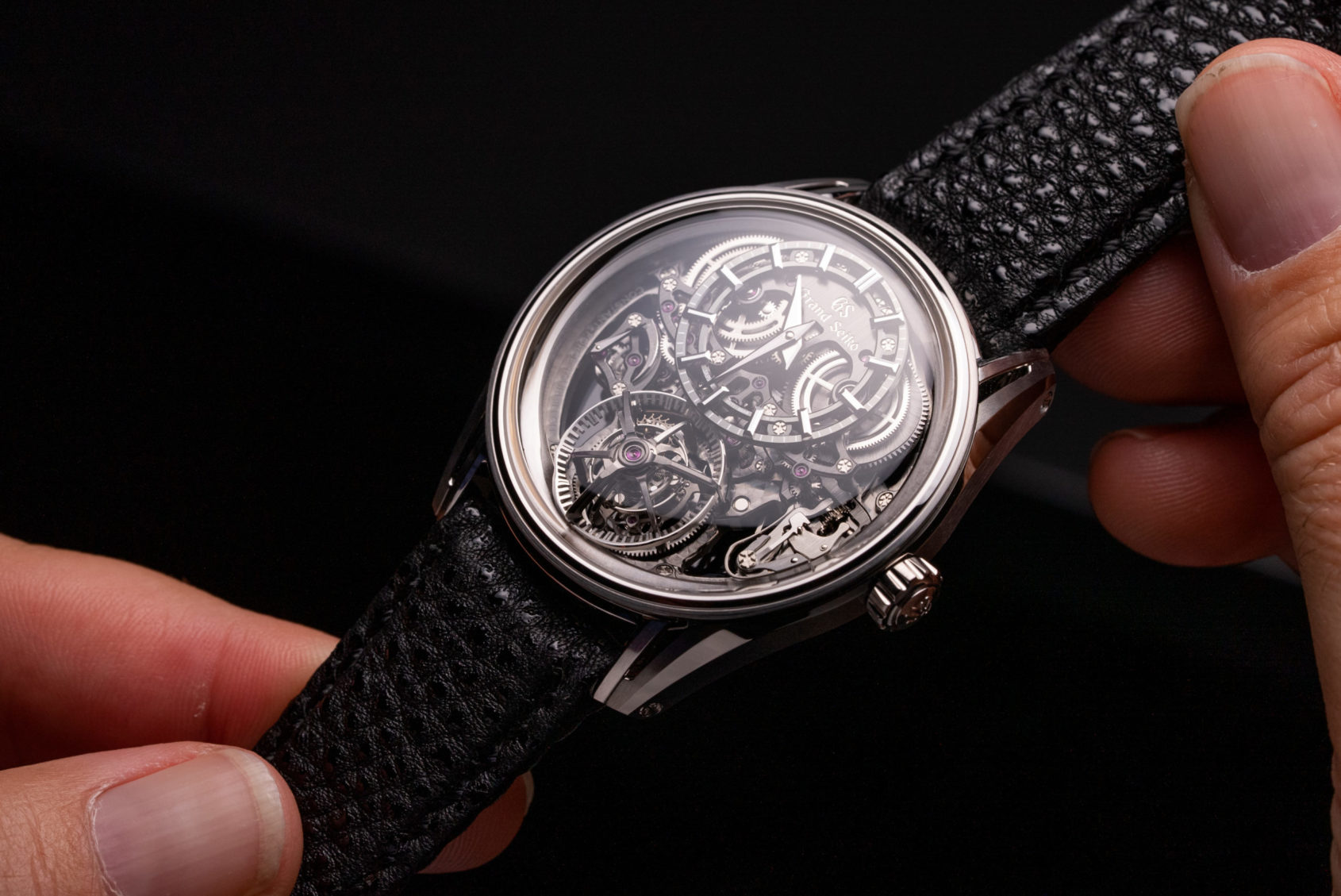 As one would expect from Grand Seiko, the case geometry and Zaratsu finishing are immpecable. But, a huge surprise was the fact that its 43.8mm diameter case, 12.9mm thick and a very reasonable 50.6mm lug to lug across the wrist, is made of both 950 Platinum and Brilliant Hard Titanium. To pair the heaviest metal with the lightest seems absolutely insane, but it is actually highly strategic in this execution. The outer case is the portion made of brilliant hard titanium, taking on the brunt of shock and wear generated while worn. The inner case, made of 950 platinum, is therefore protected by the titanium. 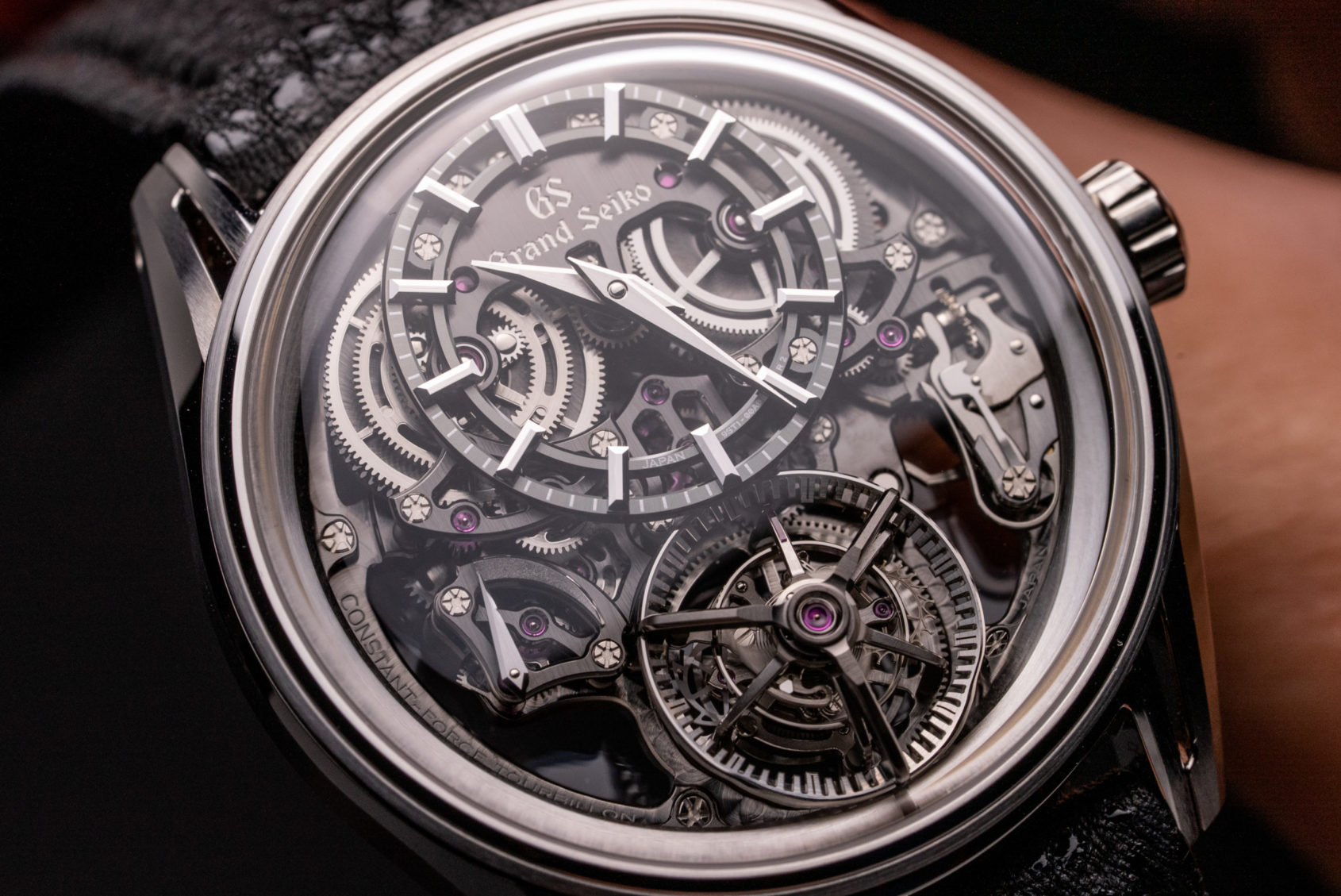 The dial lets the wearer admire the in-house 9ST1 calibre in full-view, it’s overhauled aesthetic well worth the two year wait. The production calibre had over 90% of the components changed compared to the concept T0, and the result was a stunning display of Grand Seiko pillars light and shadow. But it also added a welcome new third dimension of space, the depth of the of the openworked caliber proving a sight to behold. The usual razor-sharp dauphine hours and minutes hands, have been scaled down for the sub-dial at 12’ – replacing the funky blue hands found on the T0. The beautiful diamond-cut indices surround the two hands, affixed to an open circular chapter ring that also serves as the outer minutes track. Even the power reserve indicator at just below the 9’ side of the case utilises a small razor-sharp hand, and at the 6’ position you will find the star of the show: the constant force tourbillon mechanism. 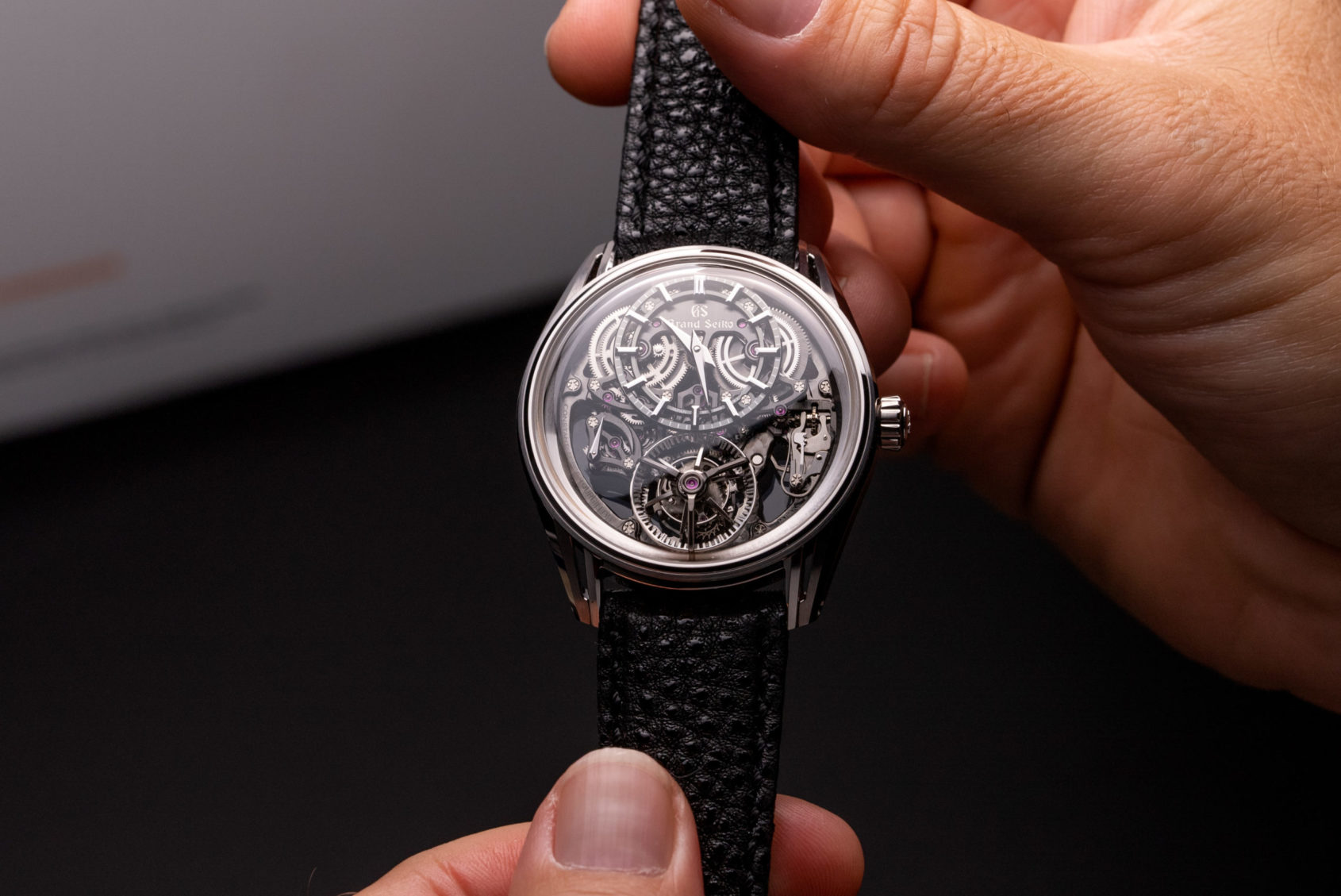 The Kodo is outfitted on a very special black leather strap, painted by hand with multiple layers of Urushi lacquer and secured to the wrist via a platinum deployant clasp. The watch also comes with an alternative crocodile strap with crocodile leather on both sides to maximise resistance against moisture. But if you are lucky enough to score one of the 20 pieces that comprise this limited edition, I would recommend finding a suitable 22mm width rubber strap for the watch as well. Why? Grand Seiko equally concerns themselves with robustness as they do with aesthetics, therefore their first entry into a grand complication has a 100m depth rating. The crown is not screw-down, but the Kodo is more than equipped to go for a swim. 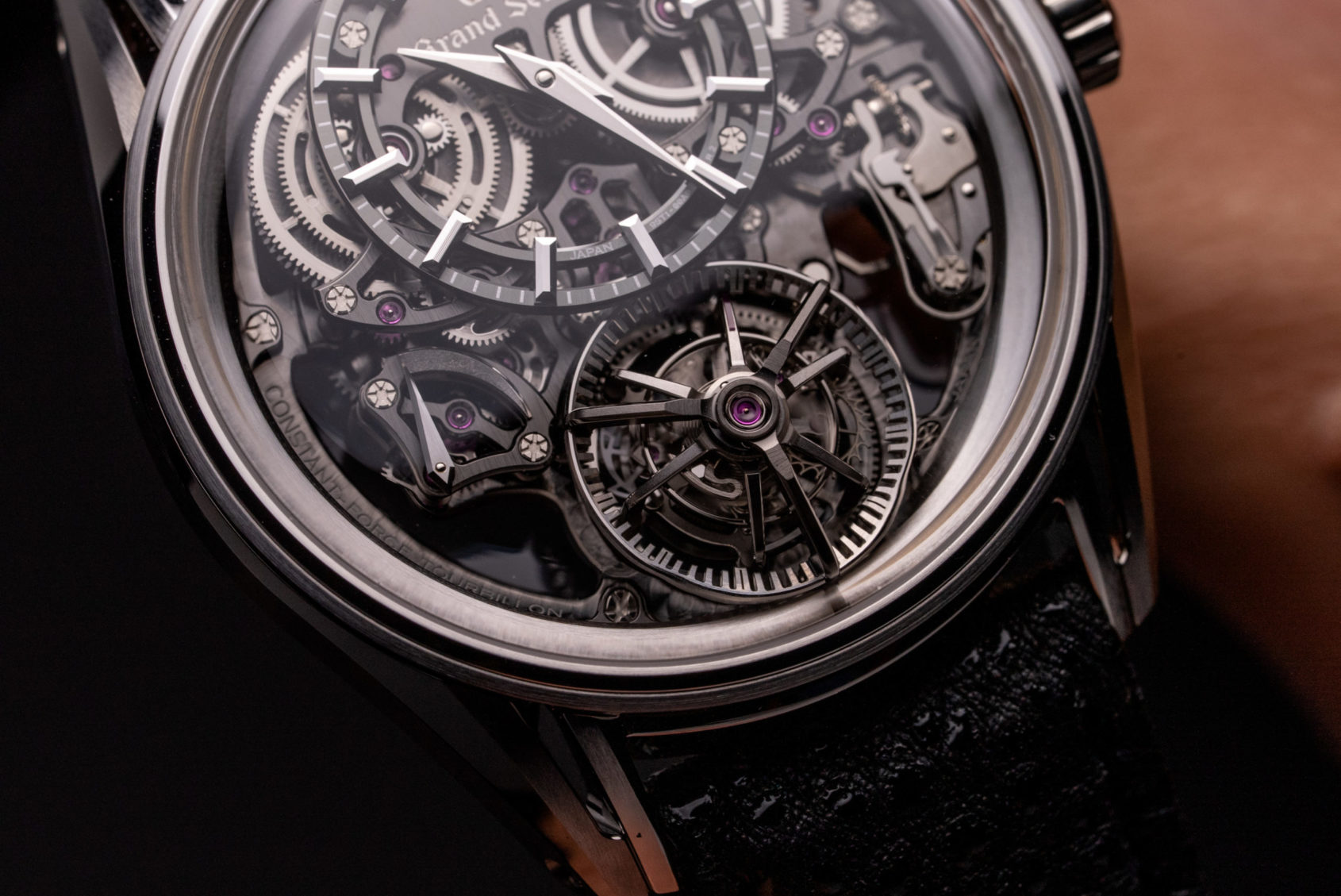 Kodo translates to heartbeat, a fitting name for a watch with a constant force tourbillon mechanism – the outer tourbillon carriage rotating step by step like a heartbeat, rotating in 60 increments once per second. In fact, Grand Seiko attributes the Kodo nomenclature to the musicality mechanism, the audbible heartbeat similar to that of a musical 16th note. This stepping outer carriage also serves as the running seconds indication for the Kodo, a jewel embedded into one of the spider-like arms to point towards the outer seconds ring. The inner carriage of the tourbillon rotates the escapement more fluidly, at a more common beat rate of eight beats per second (also known as 28,800 vph). 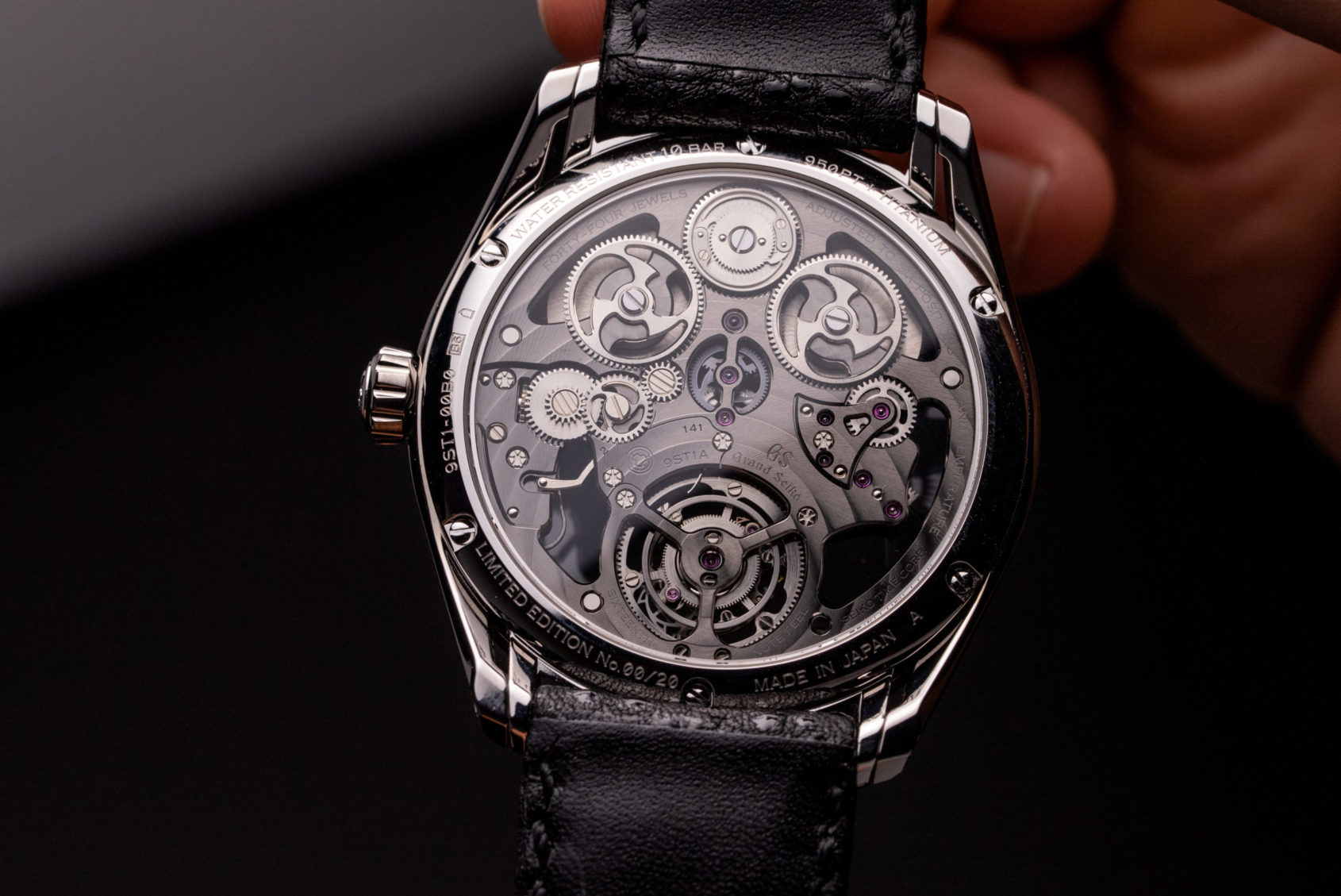 The beautifully decorated manually wound calibre boasts 50 hours of power reserve, and is regulated to the Grand Seiko standard of +5/-3 seconds per day. But Grand Seiko has gone a step further in their testing, ensuring it meets the standard in six positions, three temperatures, and across 48 hours rather then fully winding it every 24 – a common industry standard. So, what is the signifance of having the tourbillon and constant force mechanism on a single axis? Well, aside from being the first watch manufacture to achieve this, because there are no components between the tourbillon and constant force mechanism, there is no change to the torque transmitted from the constant-force mechanism to the balance wheel. This allows the calibre to have its 50 hours of power reserve and a more stable balance amplitude.

The Grand Seiko Kodo is a limited edition of 20 pieces, priced at $350,000 USD. While the watch is the most expensive reference in the catalogue by a six-figure margin, it is clear that the question is not if they will sell out – it is whether or not you will be the lucky one who receives an allocation 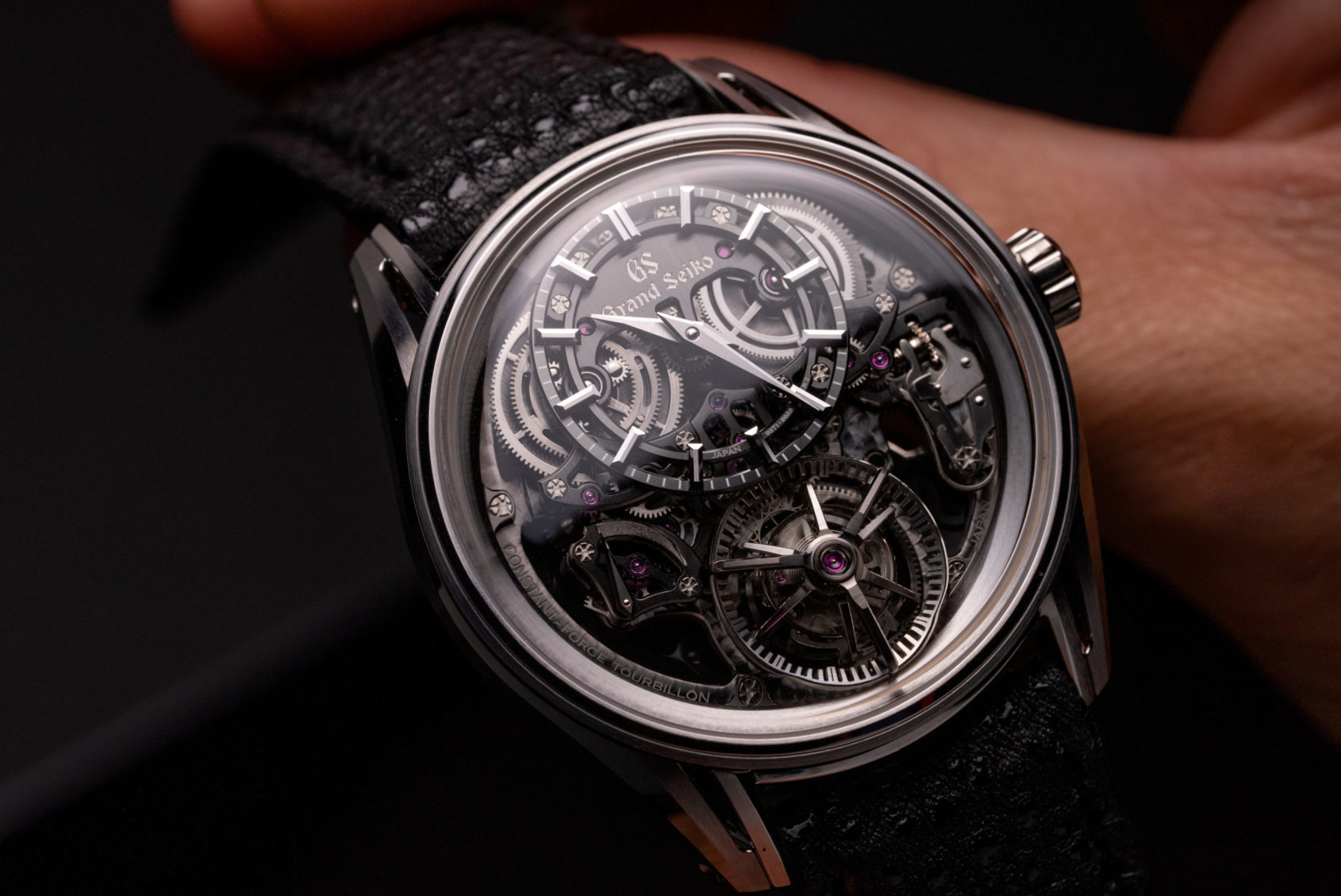 The Grand Seiko SLGT003 “Kodo” is a limited edition of 20 pieces, available for inquiries at Grand Seiko Boutiques. Price: $350,000 USD