It should come as no surprise that IWC are the masters of the Swiss-made Flieger-style chronograph, given that they were one of the archetypal manufacturers of those watches back in the ’40s, but their ability to adapt to modern military specifications and expectations is undoubtedly an achievement. Based on an exclusive model made for the Navy Fighter Weapons School (aka TOPGUN) in 2018, this “civilian” version of the watch has been released, limited to 1500 pieces. With its matte-black tactical utility, mixture of stealth and legibility, and tasteful hints of red dropped in, the IWC Pilot’s Watch Chronograph Top Gun Edition “SFTI” (which stands for Strike Fighter Tactics Instructor) is just a beast of a watch. 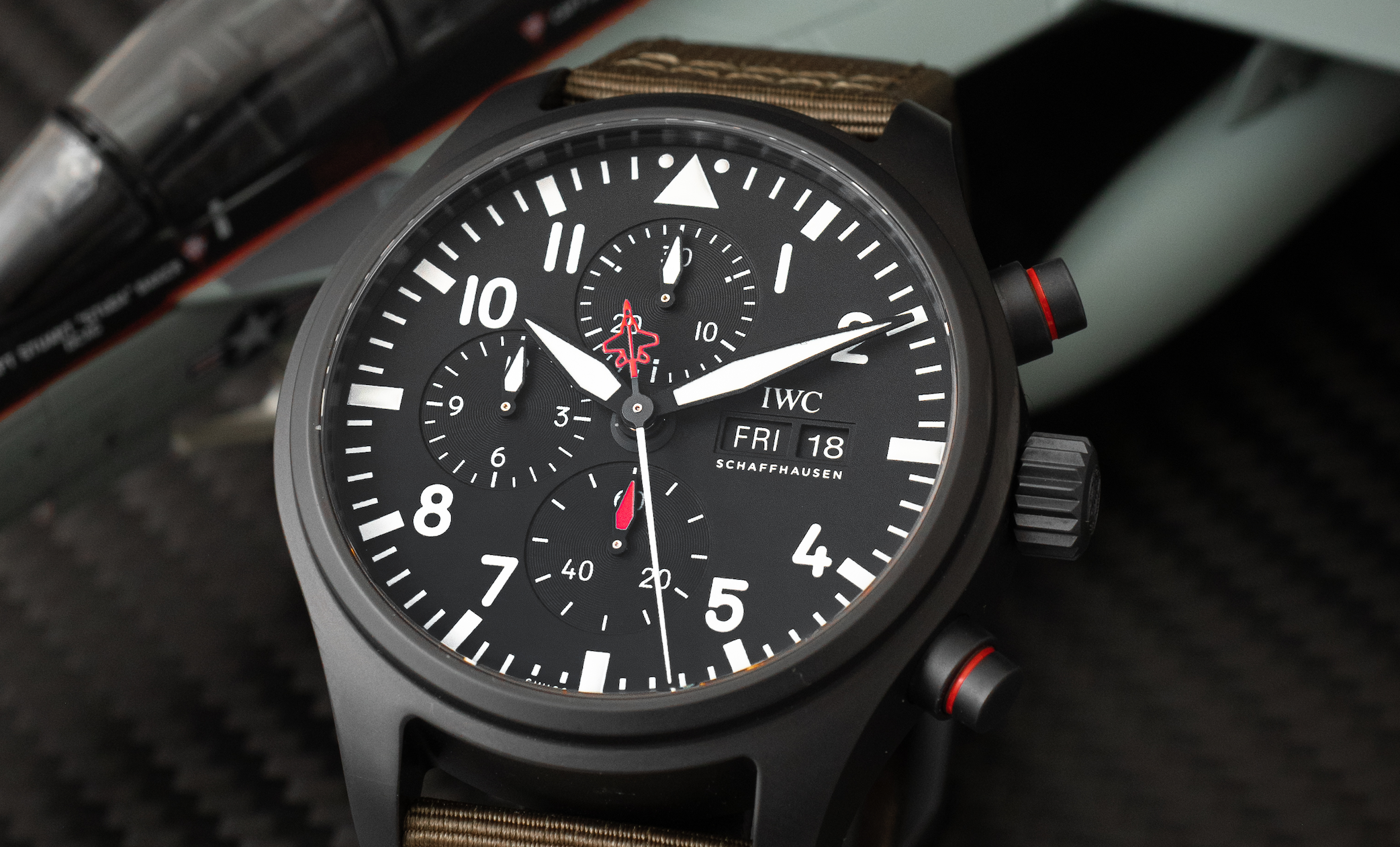 When it comes to Flieger styles, legibility is the name of the game. IWC haven’t broken any moulds here, but their subtle touches really help the watch stand out. The sunburst sub-dials are arranged well, as to neatly replace and not cut off any of the Arabic numerals. The miniature sword-hands are so quick to read at a glance, and the running seconds hand in red at 6 o’clock means that the watch isn’t too asymmetrical in its moving parts. The jet-shaped and skeletonised counterbalance on the seconds hand is also a great addition, reminding the wearer of its SFTI-specific origins. 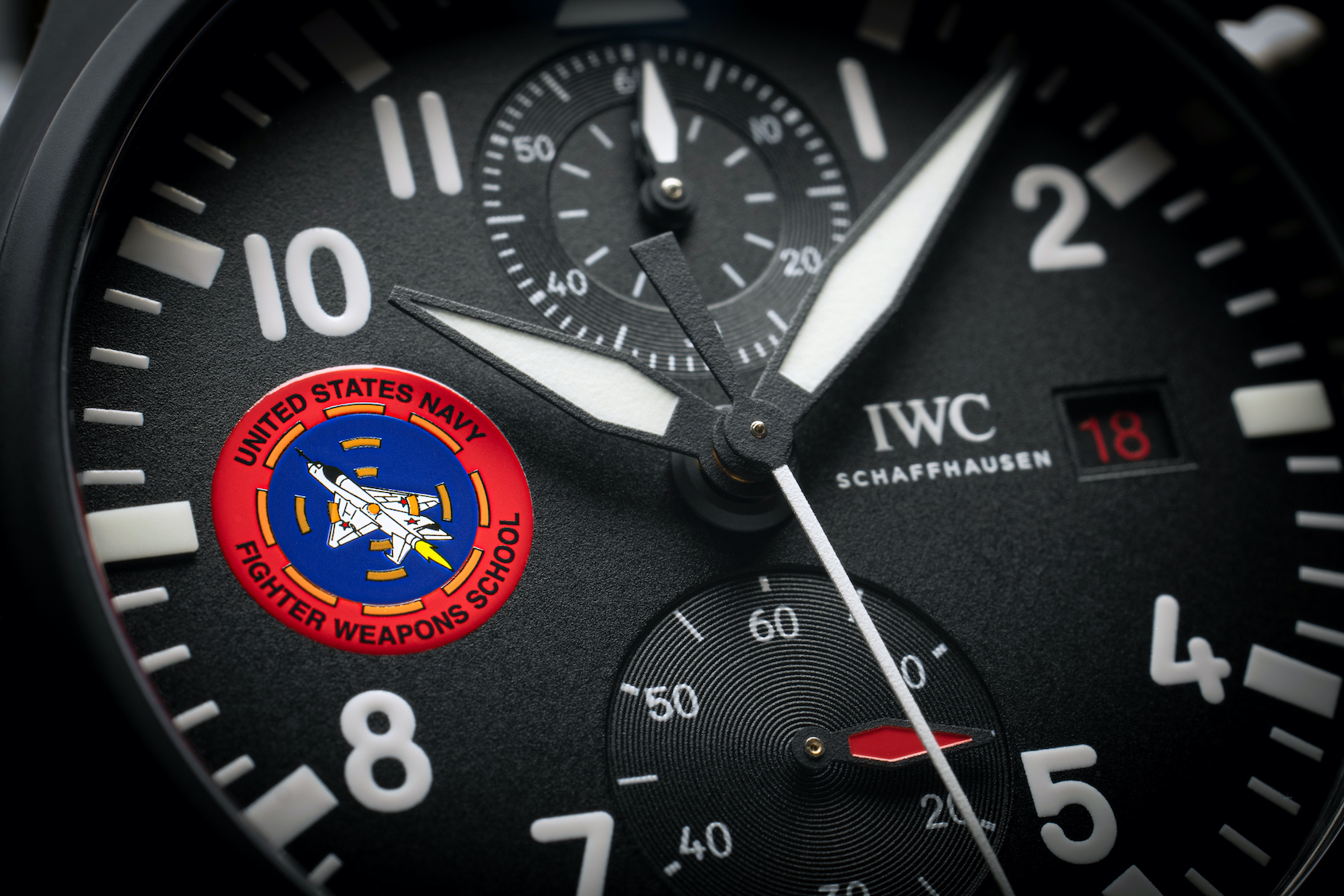 The typical triangle and twin-dot marker at 12 helps give the reader instant alignment when reading the watch in low light or when travelling at speed. The day/date complication is neatly tucked away underneath the IWC logo, easily readable but looking quite compact in comparison to the large size of the dial. 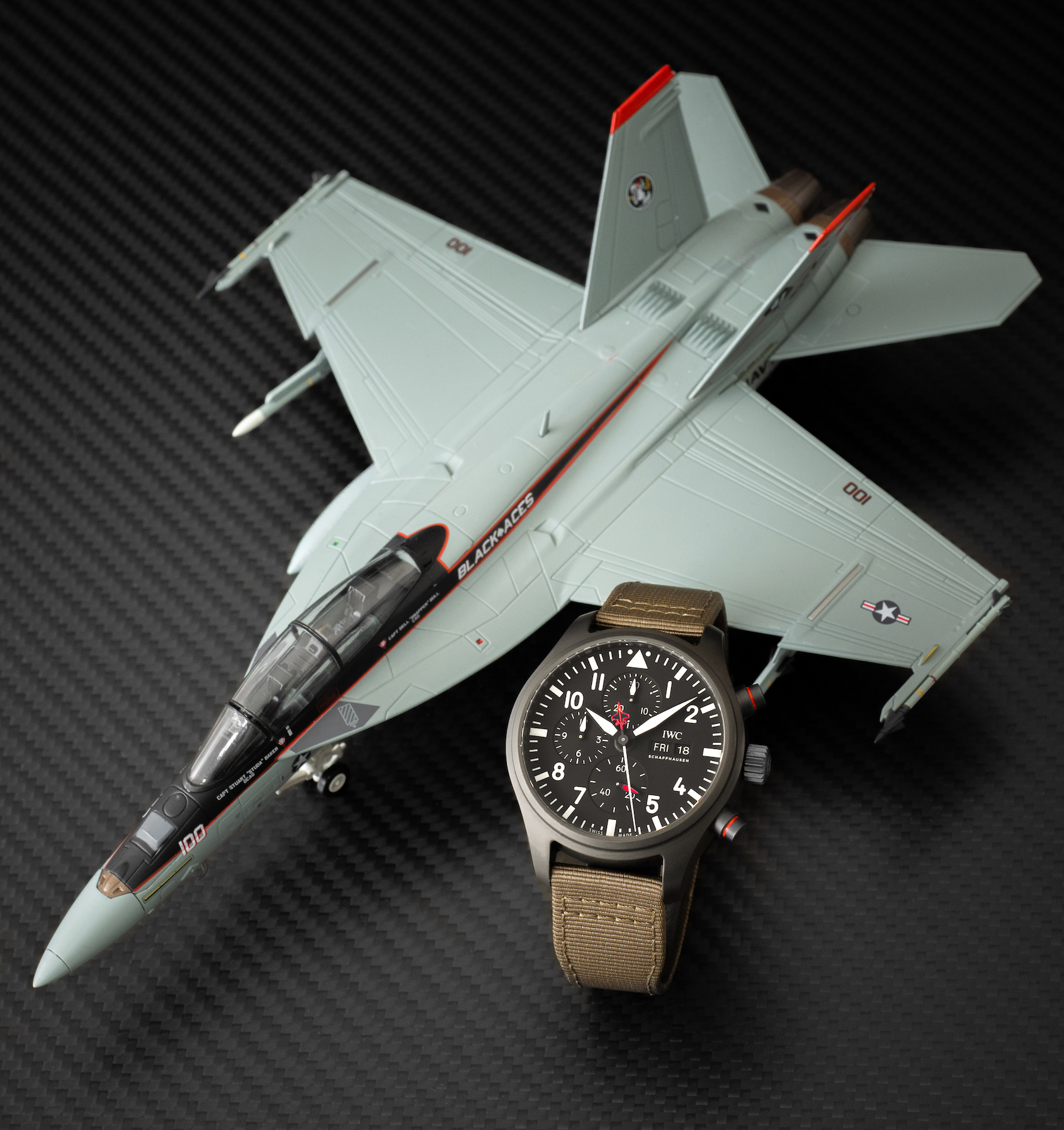 IWC is no stranger to the pilot’s watch formula, and that’s no different when the case material isn’t stainless steel. Although we’re seeing more and more ceramic cases pop up, we’re generally quite used to it being a glossy, almost liquid material. For military purposes, shiny objects are generally dulled down as to not catch the light and give away troops’ positions accidentally. Hence, this Top Gun Edition has a matte-ceramic case, with pushers and caseback made from IWC’s proprietary Ceratanium, a material with the light weight of titanium but the hardness and scratch-resistance of ceramic. 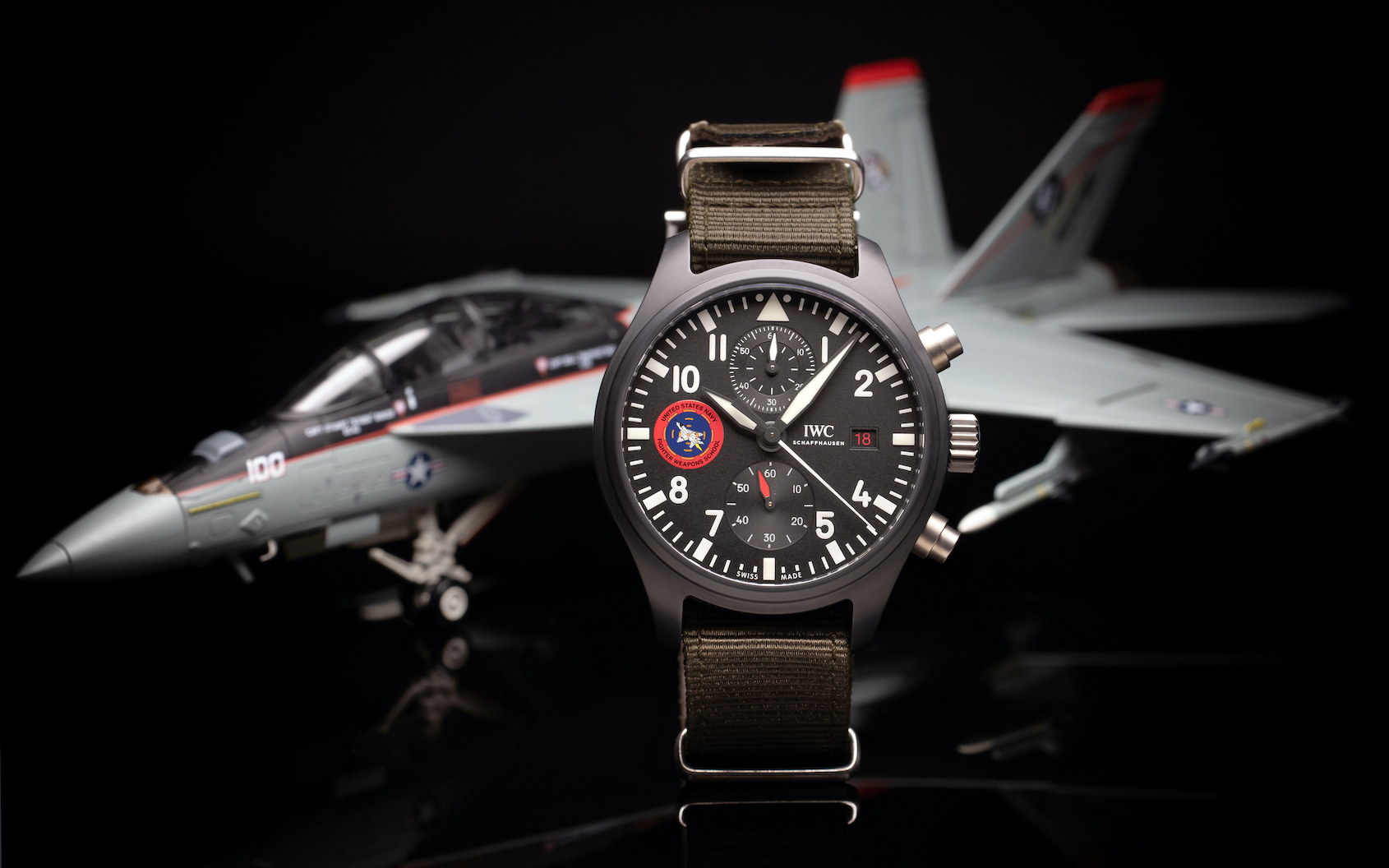 At 44.5mm in diameter and 15.7mm thick, it definitely doesn’t shy away on the wrist. Automatic chronographs in general can be expected to be large, but when a watch’s purpose is to be quickly legible when soaring through the sky, the extra millimetres are appreciated. 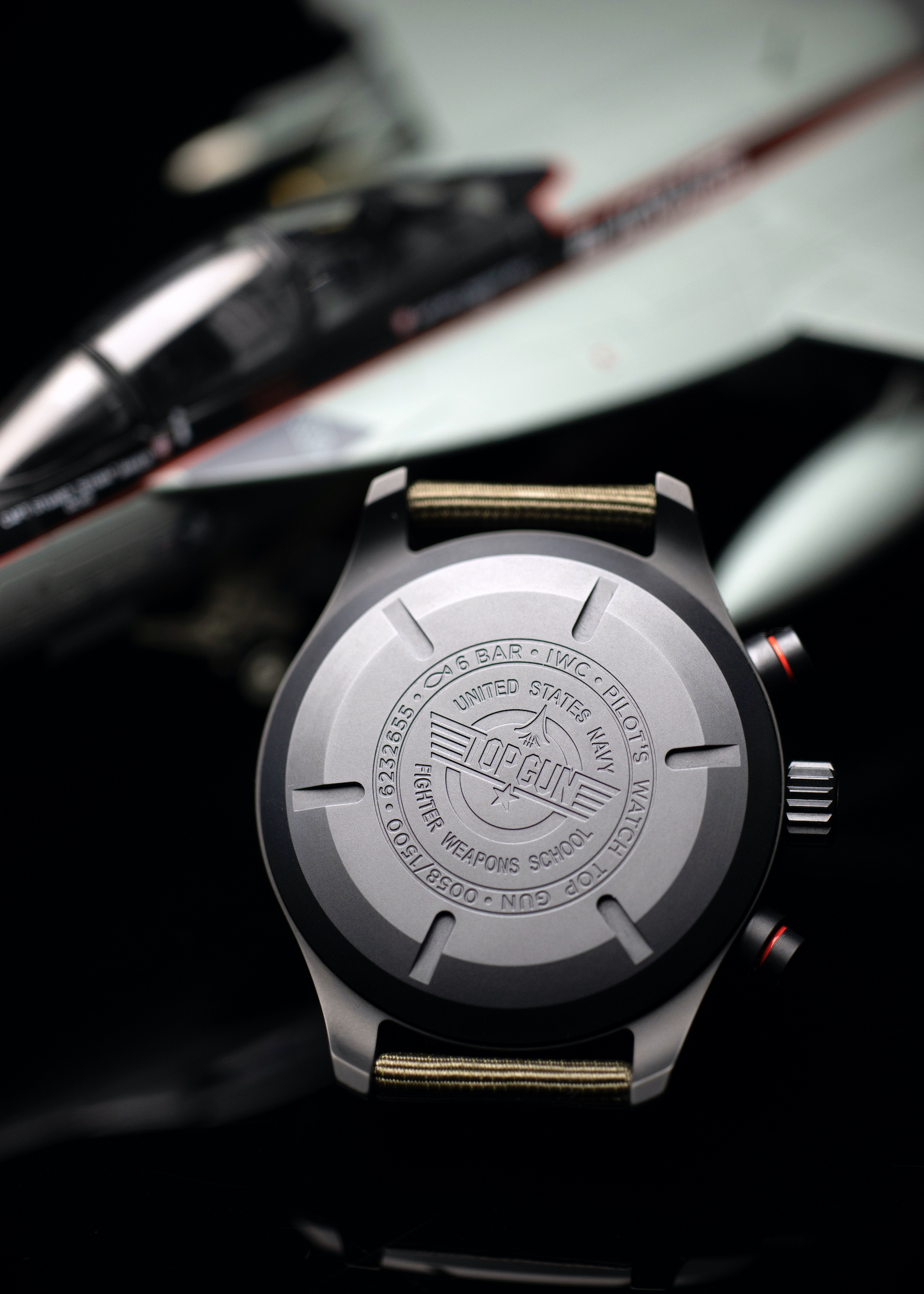 Hidden behind the Ceratanium caseback is IWC’s in-house calibre 69380. The column-wheel chronograph, complete with day/date display, has everything that a pilot’s watch needs. Its 46 hours of power reserve and 28,800 vph beat rate may seem no more impressive than the Valjoux 7750 architecture upon which this calibre is based, but IWC’s quality manufacturing prowess is what separates them from other companies, getting the accepted accuracy much closer to COSC standards. 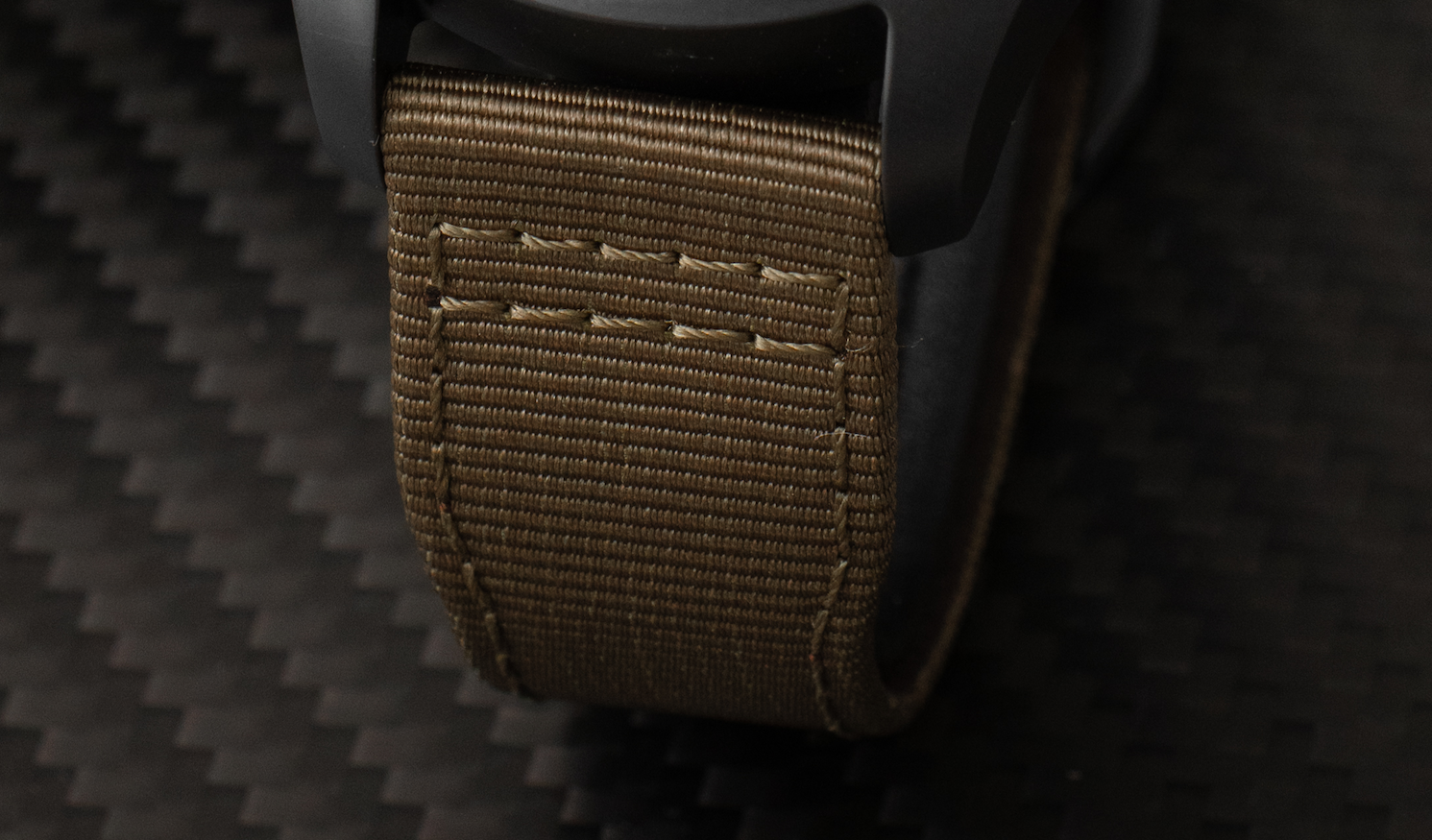 Keeping to the theme of military practicality, the SFTI comes on an olive green two-piece textile strap, with a leather backing for the best compromise between comfort and long-term durability. With a 21mm lug width, it’s not the most versatile watch in terms of changing straps around, but it’s easy to imagine a huge assortment of NATO straps suiting its style well. 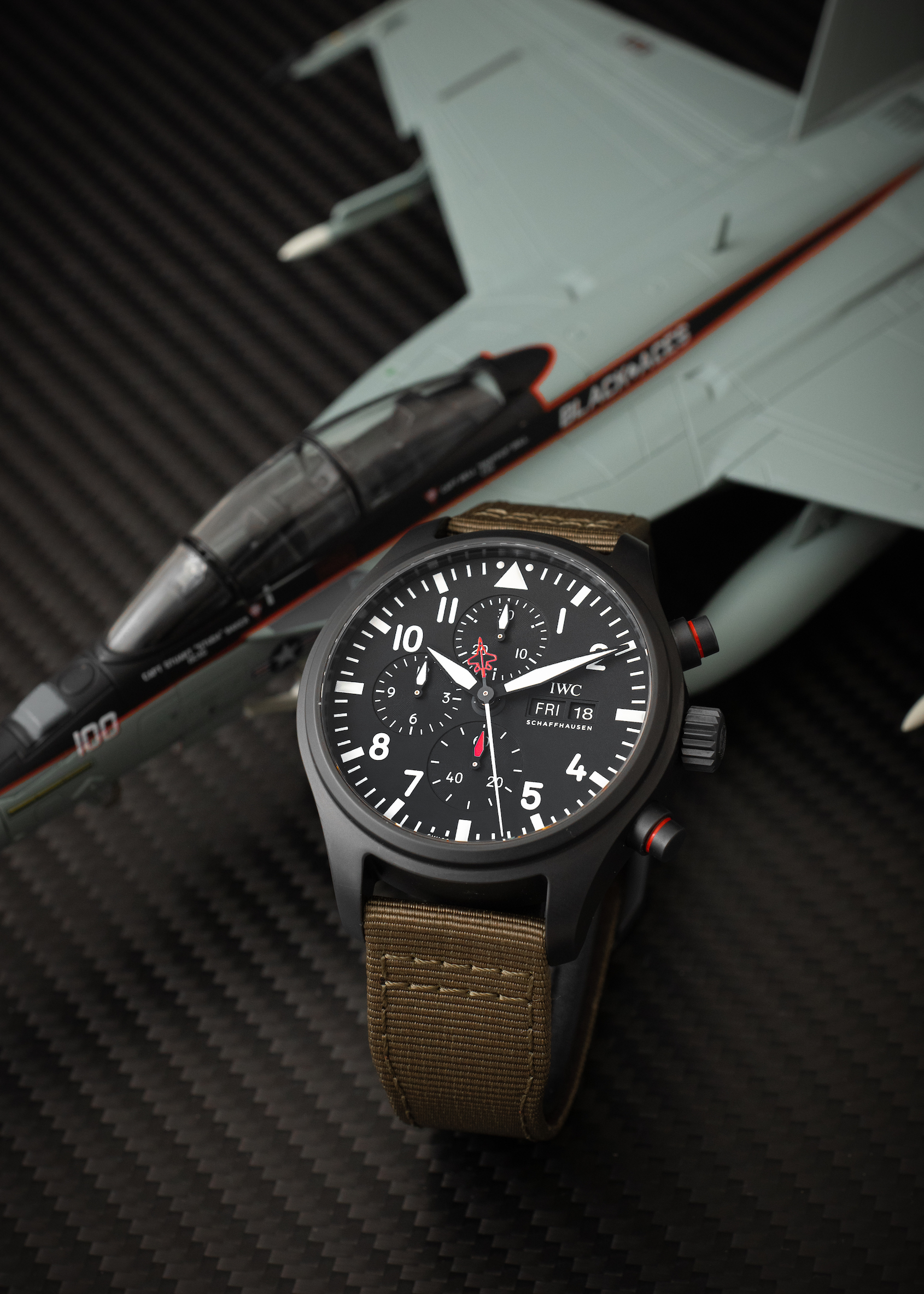 The IWC Pilot’s Watch Chronograph Top Gun Edition “SFTI”, mouthful though it is, has to be appreciated. Its sleek style only benefits from its dedication to airforce-dictated utility, and you’re getting some of the best quality of engineering you can get for this style of watch. At $14,200 AUD, it’s not exactly easily accessible, but when viewed as a piece of equipment on board a $66.9 million USD Boeing F/A-18 Super Hornet jet, it’s put into perspective just what this watch represents.

Made in partnership with IWC Heuer. However, the opinions expressed in this article are our own in accordance with our Editorial Policy.