Have you ever had a real snake wrap itself around your wrist? If not, I urge you to do so. Really. It’s a wonderful sensation. If you have, you will know exactly what I mean. It feels amazingly sensuous. Gentle, warm, almost fluid. And those were pretty much my first impressions when I tried on the pink gold Bulgari Serpenti Seduttori at Baselworld earlier in the year.

Visually, the design is a much more abstracted representation of a serpent than some of its predecessors (notably, the stunning enamel and gem-set versions of the 1960s – some of which I have been lucky enough to try on my wrist over the years). However, the way it feels on the wrist makes it the most snake-like of the countless variations of Serpenti that Bulgari has produced over the past seven decades. 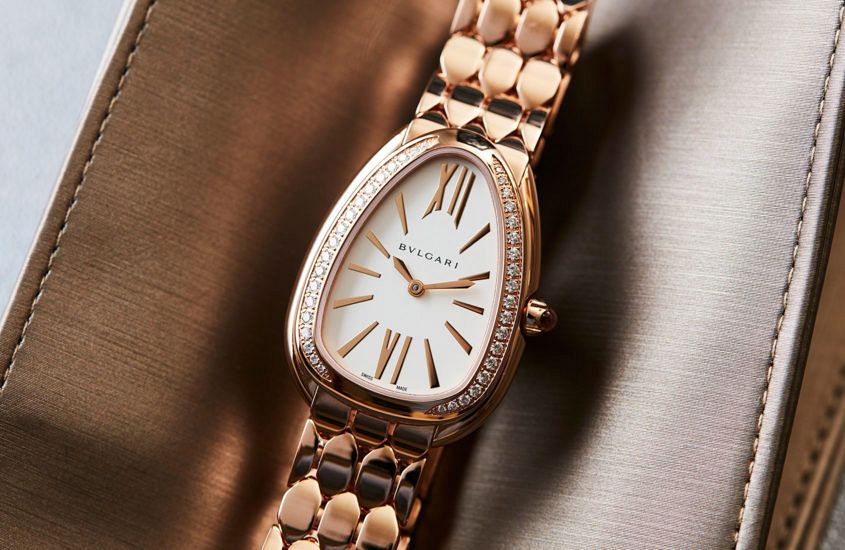 This watch really is all about the bracelet – in the best sense. The engineering that makes those hexagonal scales (links) feel as supple as a satin ribbon is testament to Bulgari’s 135-year heritage as a jeweller. Each link has been designed with a very subtly convex surface and angled cutaway around the edges. Barely perceptible details – but they are what cause the metal to capture and reflect the light so beautifully.

The elongated octagon of each link is a form that Bulgari has explored before: it will be familiar from the 2016 Serpenti Seduttori jewel collection (Bulgari’s first use of the ‘seductive snake’ moniker), where the scales were reduced to open-worked frames and formed into three-dimensional representations of snake heads. Less familiar will be the very small number of one-off bracelets Bulgari made in the mid-1930s, comprising platinum and diamond links shaped just like those on the new watch. (Very occasionally, one of those rare period pieces appears at auction.) 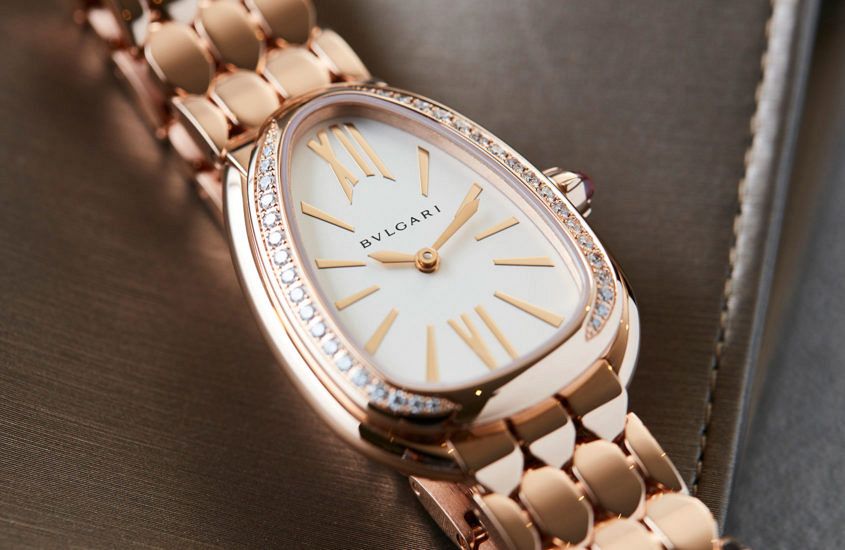 Reflecting Bulgari’s intention that Serpenti Seduttori should be a “more mainstream”, daily watch, the bracelet is fastened in the conventional way, by a folding buckle. Many will love the ease and modernity of this – although for some, the quirkiness of the more animalistic coiled bracelets will always define Serpenti. 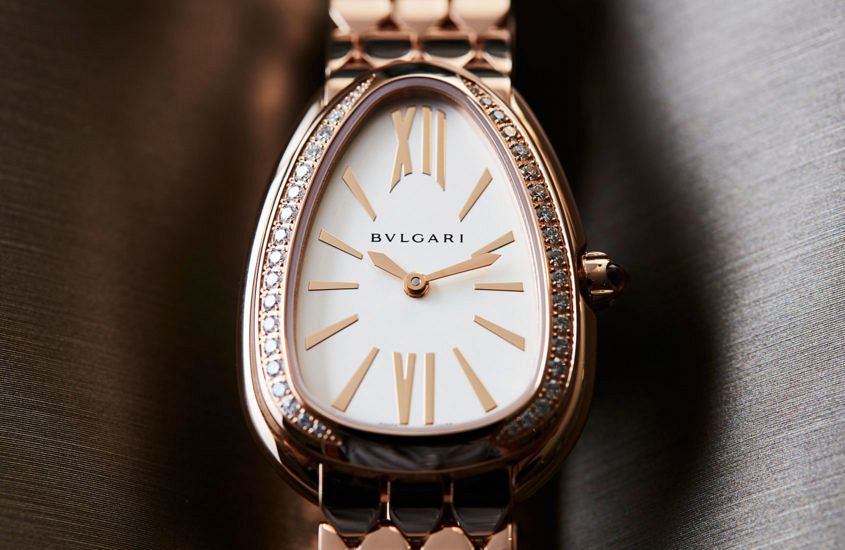 Since Bulgari relaunched Serpenti in 2015 (of course, the icon never went away – the designs just hadn’t been greatly rethought for the 21st century), we’ve seen several variations of the watch case – abstraction of the snake’s head: one a more angular and geometric form, the other more curvy and soft – somewhere between an oval and a triangle (Bulgari calls it drop-shaped). Serpenti Seduttori has adopted the latter – albeit with some important changes, not least that the 33mm-wide case has been slimmed down, so that it sits closer to the wrist. Invisible attachment points for the bracelet have been created at both ends of the case (the ‘wrapped’ Serpenti bracelets attach only at the wider end of the case). The result is an uninterrupted flow of precious metal – all curves and waves and rich light-and-shadow effects. Bulgari again showing off its jewellery design chops. 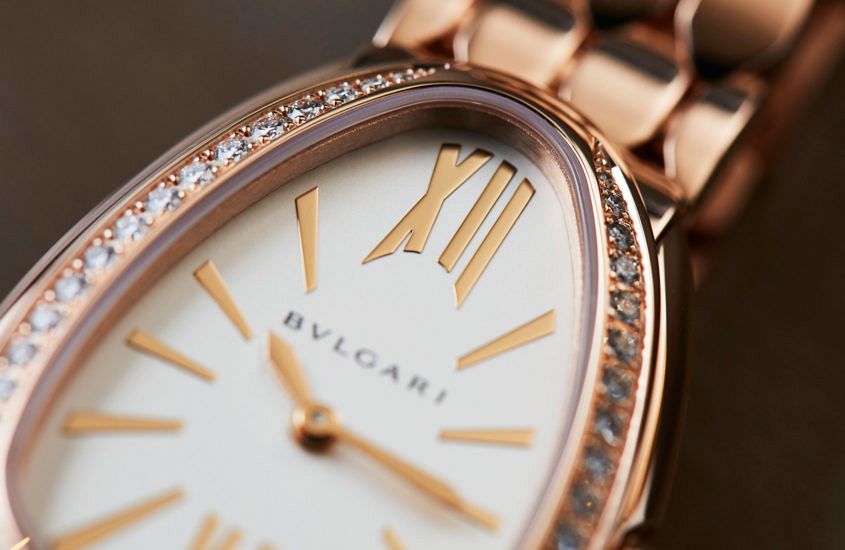 On the bezel, a row of diamonds sits on each side of the dial like parentheses, drawing the eye to the silvery-white opaline surface. The combination of the Roman XII and VI, simple indexes for the other hours, and unfussy sword-shaped hands – all in pink gold to match the case – keeps things unfussy, elegant and highly legible. 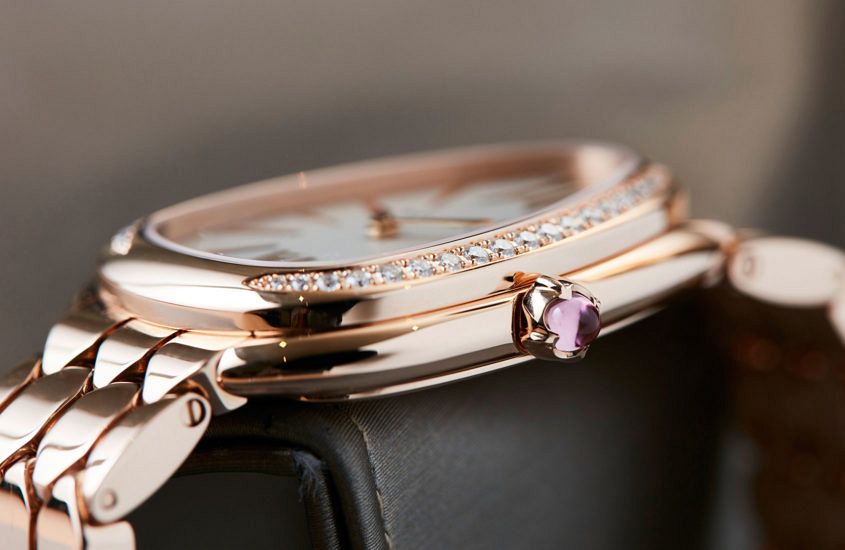 This watch is about style and jewellery, not horology (the movement is quartz), and it really shows Bulgari playing to its strengths as a designer. It’s no easy feat to create an object that brings so many familiar elements together in a way that looks fresh and new – and that’s what we have here. The Serpenti Seduttori oozes the same kind of sexy glamour that we associate with Rome in the 1960s heyday of Cinecittà and La Dolce Vita. It’s a very seductive snake indeed.