Why the Cartier collection of Tyler, The Creator matters

It’ll be no surprise to you to hear that another rapper has been on record showing off their watch collection. Tyler, The Creator, however, is no ordinary rapper. His collection doesn’t include iced-out Rolexes and Patek Philippes dearer than your first-born, no. The Californian’s tastes lie in a brand that’s seen an incredible resurgence in the last few years – Cartier. In a recent interview that looked at Tyler as a collector of many things, he describes watches as simply objects that bring him joy – I feel like many collectors could learn from that adage. Not only is this unique for any watch collection, let alone when compared to a stereotypical music star’s, it left me wondering how figures with such interests may influence tastes in the future. But first, let’s give a little more insight into the individual Cartier pieces in Tyler, The Creator’s collection.

The obvious one to start with is the big one – the Cartier Crash. Whichever origin story of its design you believe in, one thing is for certain – the Crash can thank people like Tyler and Kanye for its mainstream popularity. While seasoned collectors like Roni Madhvani and John Goldberger recognised the amazing designs of Cartier’s London outfit, it took a while for others to catch on. A million-dollar sale later, and the Crash has become a smoking hot watch.

Having said that, Tyler gives it, and his other pieces, the ol’ Andy Warhol treatment. Not bothering to replace the batteries nor wind them, he wears the leather straps in and out of the pool and on his many bicycles, explaining: “I’m not spending all this money on these things that I claim I like and not enjoying them.”

The Coulissant is as much jewellery as it is a watch, allowing the wearer to completely obstruct the dial with a sliding piece of yellow gold. Its elongated case has obvious Art Deco inspiration in the louvres on either side of the dial, which also follows the design language, with its alternating round and rectangular indices. Owing to the shape of the case, the Coulissant, or Baguette, uses a LeCoultre Duoplan movement, wound by a horizontal crown located on the caseback. The blue strap above seems to correspond perfectly with the one on Tyler’s wrist, suggesting the rapper went on a shopping spree at the Monaco Legend Group’s “88 Cartier” auction last year, which also included the Obus and Petit Cylindre – more on which later on.

The Santos Dumont is likely among the more “regular” pieces in Tyler’s collection, though he makes sure to snazz it up with a bright pink leather strap. I’m not certain of the reference that Tyler is sporting, though it does seem to be a very small size – my best guess is the reference 2787. With an 18k yellow gold case measuring 28mm x 30mm in size, it’s powered by a quartz movement, and is likely to have been produced during the ’90s or early noughties. 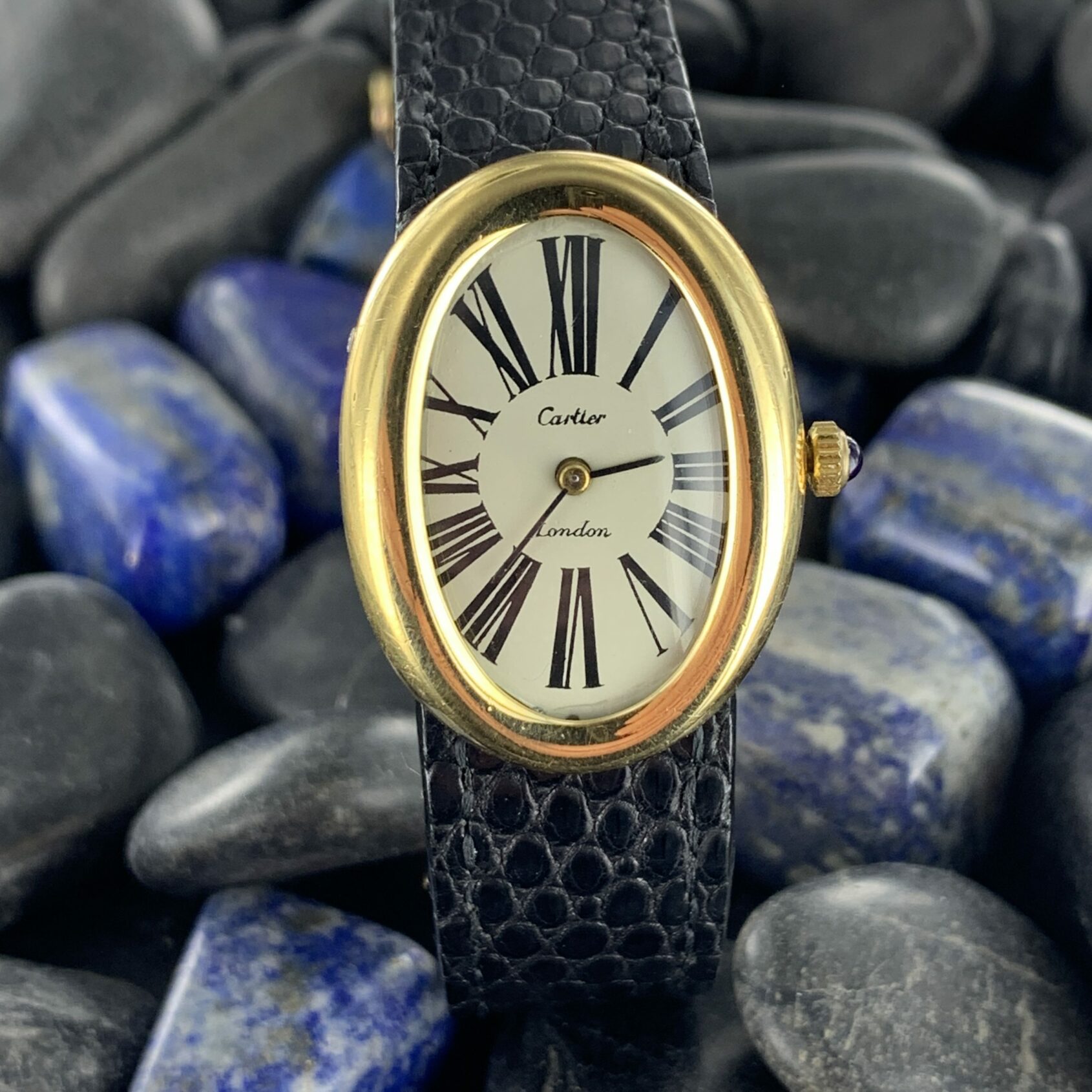 The Cartier Baignoire gets its name and design from the baignoire, or bathtub in French. While certainly not common, the Baignoire has enjoyed some recognition in both its standard and Allongée forms, but Tyler’s piece has something that sets it apart from the rest. Hidden just below the pinion, in a subtle script is a text denoting “London”. The first instance of an oblong Cartier appeared in 1912, a stretched-out iteration of a traditional round watch, which the team at Cartier London stretched out even further to create the Allongée – this is the same workshop that birthed the Pebble, Asymétrique and the famous Crash. The London outfit also made the regular Baignoire shape, which seems to be Tyler’s example. I’ve seen plentiful Roman-dialled and plain-dialled Tank Musts, but only a few with Arabic numerals, especially in this configuration, being the reference 2415. The case is a vermeil affair, meaning a 925 silver base with solid gold plating – a lot of which wears off quickly as you may see from the example above. The diminutive silver case measures in at 30mm x 22mm, the two-hander powered by a quartz movement. Tyler paired his with a loud green croc strap, and somehow it just works. I can only image how scuffed his piece is, considering that he cycles, swims and sweats while wearing his watches.

The Obus is a truly quirky proposition. Cartier took the square shape of the likes of the Tank Chinoise or Française, gave it fancy, pill-shaped ogival lugs and changed the bezel drastically. Rather than printing the numerals on the dial, the bezel is widened to include the classic Cartier Romans and a railroad minute track in inky blue champlevè enamel on the gold bezel. The dial is tiny, with two small blued hands and the Cartier Paris script. Tyler decided to pair it with a puffer jacket, ushanka and gardening gloves, by the looks of it. The look is as curious as the watch, you could say. This quartz-powered oddity dates back to the 1980s, while the Tank Obus itself goes as far back as 1929.

Tyler’s final pickup from Monaco Legend Auctions (at least for now) is the Petit Cylindre. This teeny tiny piece features a wildly domed semi-cylindrical solid piece of glass that covered the minimal dial. Measuring in at 15mm x 33mm, it sports a LeCoultre Duoplan movement, just like the Coulissant, with the same horizontally positioned caseback crown. The strange case is suspended betwixt the ends of the strap by two block-like protrusions, with screw-bars securing the strap.

Among the sea of oddities, I guess that even someone like Tyler needs a bit of normalcy. The Tank Louis Cartier is certainly that, alongside the Santos Dumont. Featuring a date complication at 3 o’clock, the dial has the instantly recognisable Cartier Roman numerals and miniscule, blued sword hands, separated by a railroad minute track. The case is yellow gold, and I’m fairly certain Tyler’s watch is the reference 2441, meaning a quartz movement and 25.5mm across. While he’s certainly been seen sporting Cartier more than any other brand, Tyler’s choice of wristwear also unsurprisingly includes a G-Shock, and more surprisingly, a Bulova Accutron Spaceview. This affinity for the non-mainstream and even the slightly strange, got me thinking. Tyler, The Creator is definitely on the more extreme end of the taste spectrum. His car collection is similarly unique, full of boxy stuff – including an E30 M3 and rally legends like a 131 Abarth and Lancia Delta Integrale. He isn’t the only celebrity that’s been wearing smaller, dressier pieces, however.

Timothée Chalamet with an incredible Tank à Vis double time zone, Bad Bunny with a vintage, feminine Patek Philippe and Austin Butler with a Tank Must are all examples of this trend. Given a few years, I wonder whether that will flourish, with the stainless-steel sports watch craze tapering off, or will we hear people mention a Daytona waitlist and a Ballon Bleu in the same breath? As an enthusiast, I’m not sure which I’d prefer, though time will surely tell.