TAG Heuer are a brand well-known for their modern watch designs and have for the most part resisted the pull of directly heritage-inspired watches. But in the last couple of years, TAG Heuer have started to dabble in the past with greater focus, specifically with the Carrera 160 Years Limited Edition pieces that got a strong reception. Now in 2021, we have the new TAG Heuer Aquaracer Professional 300 Tribute to Ref. 844, which is about as close to a direct vintage reissue as the brand has done. 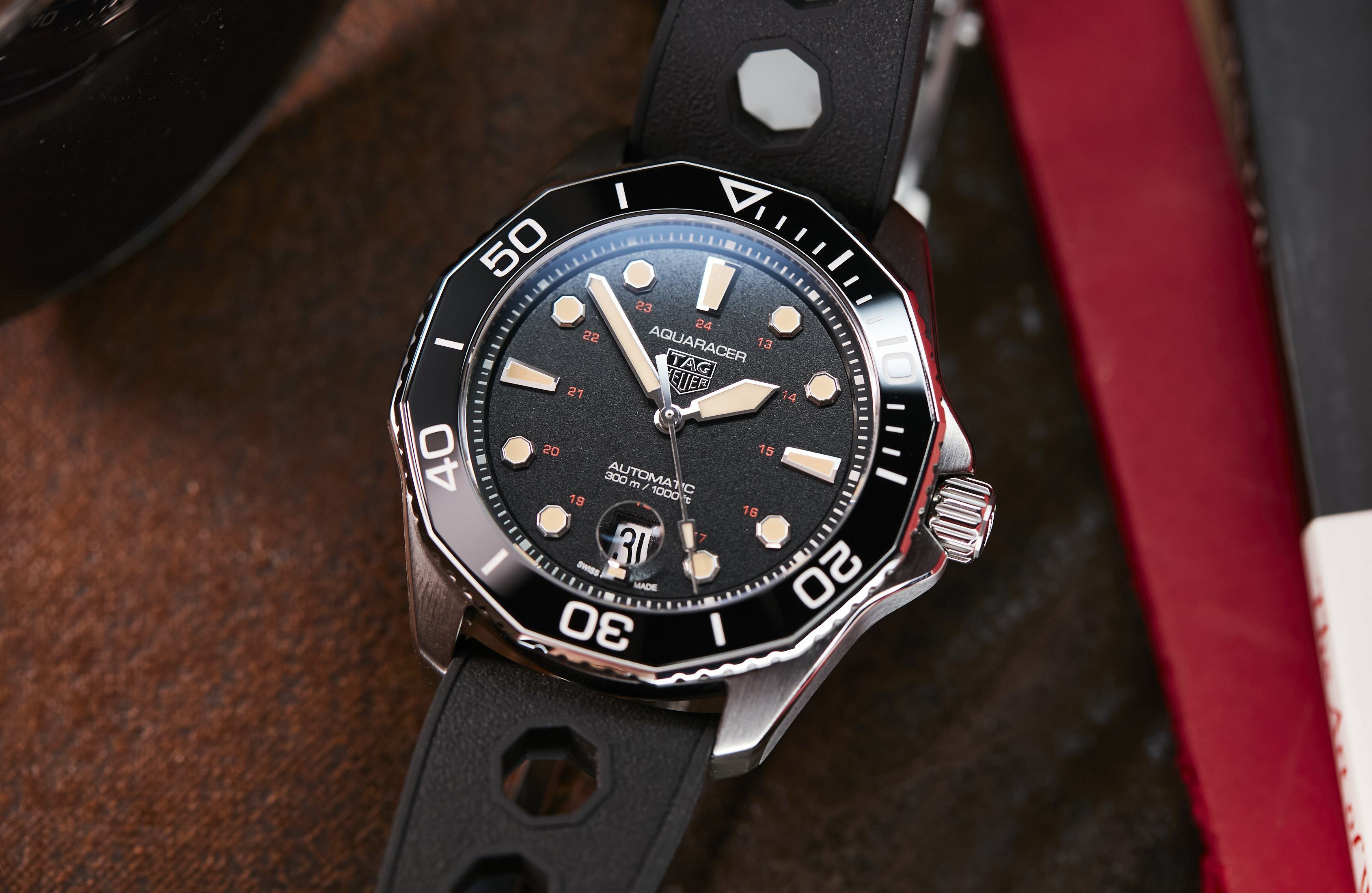 To take a dip into the history of this watch briefly, the Heuer Monnin ref. 844 was the first dedicated dive watch that Heuer ever produced in 1978. Like most Swiss watchmakers in the ’70s, the effects of the quartz era were being fully felt as they struggled to compete with the new battery-driven offering from Japanese brands such as Seiko. This was a time of experiment to survive and Jack Heuer made the decision to enter the dive watch market for the first time. 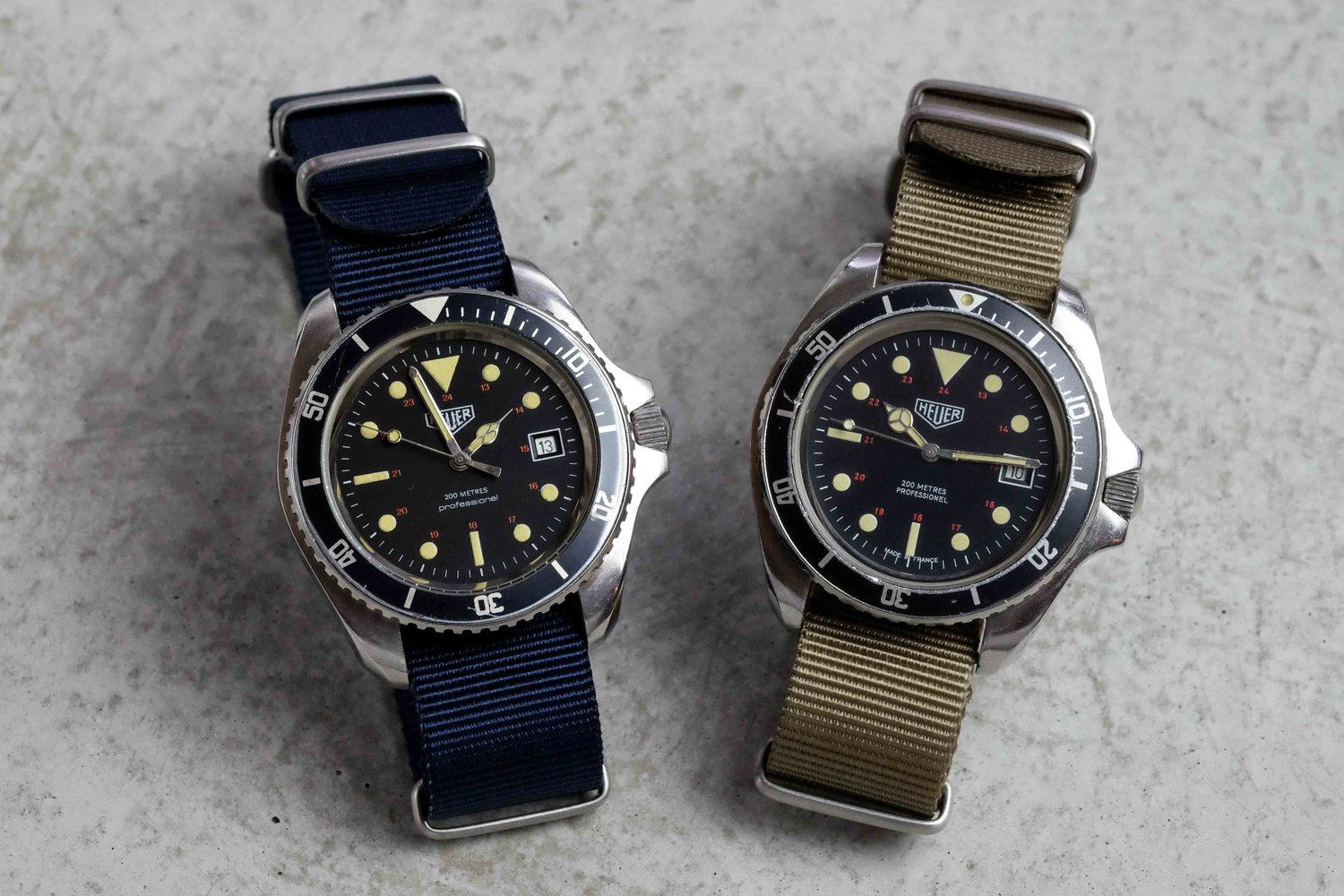 The evidence of experimentation was clear, with Heuer outsourcing the initial production of the watch to a French watchmaking company called Georges Monnin, who produced the watch with an eye-catching red 24-hour scale on the dial. The watch was larger than most at the time with a 42mm steel case and turned out to be a hit, causing Heuer to bring the entire production of the watch back in-house. 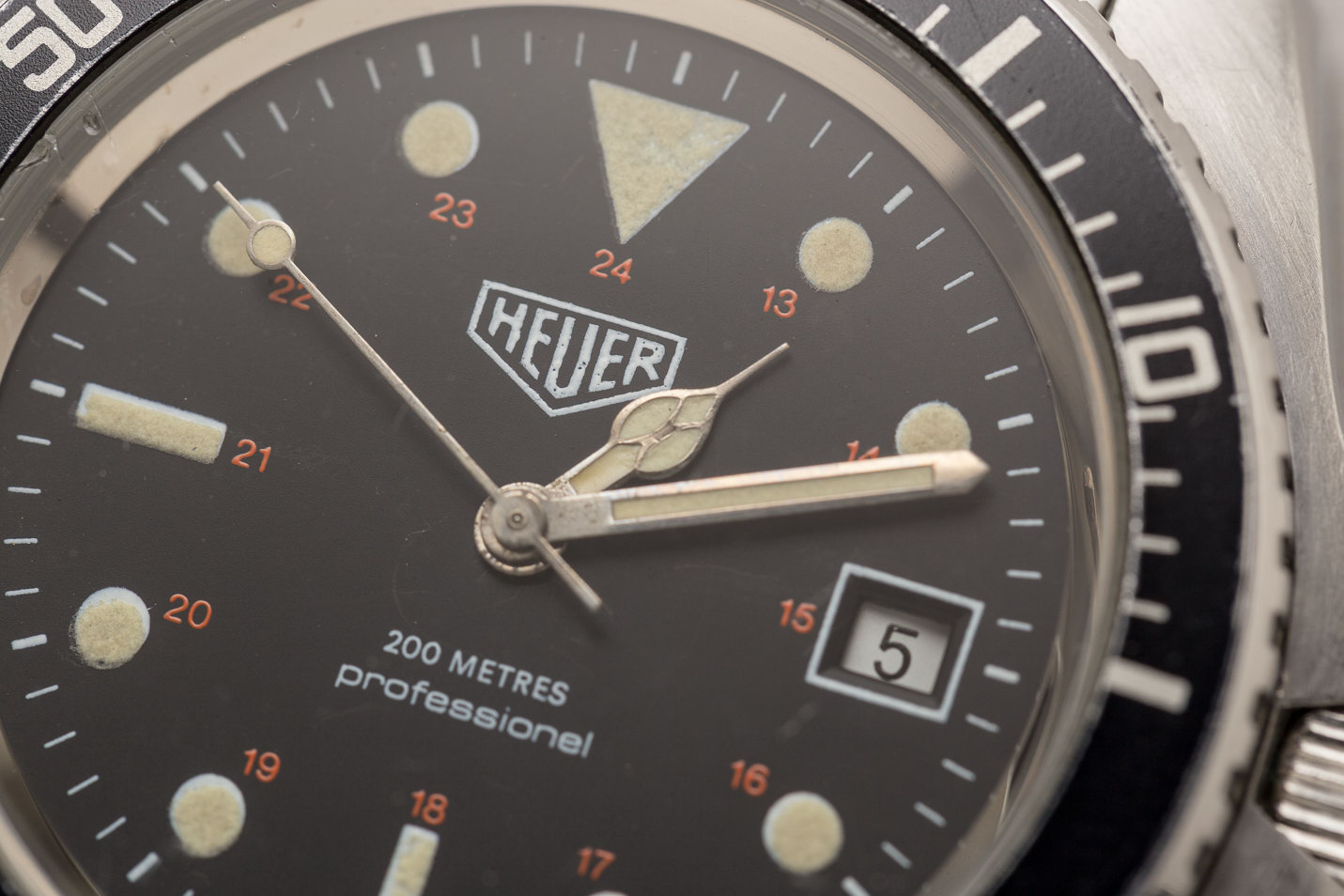 The cathedral hands of the first version of the ref. 844. Image: shucktheoyster.com

The ref. 844 is now remembered both as a critically successful watch at a time when Heuer was struggling commercially and as the source-DNA of all diving watches from the brand since. The new TAG Heuer Aquaracer Professional 300 Tribute to Ref. 844 pays proper homage to the design that was born in the late ’70s, but with all of the modern trimmings that we’ve come to expect from the La Chaux-de-Fonds based watchmaker. 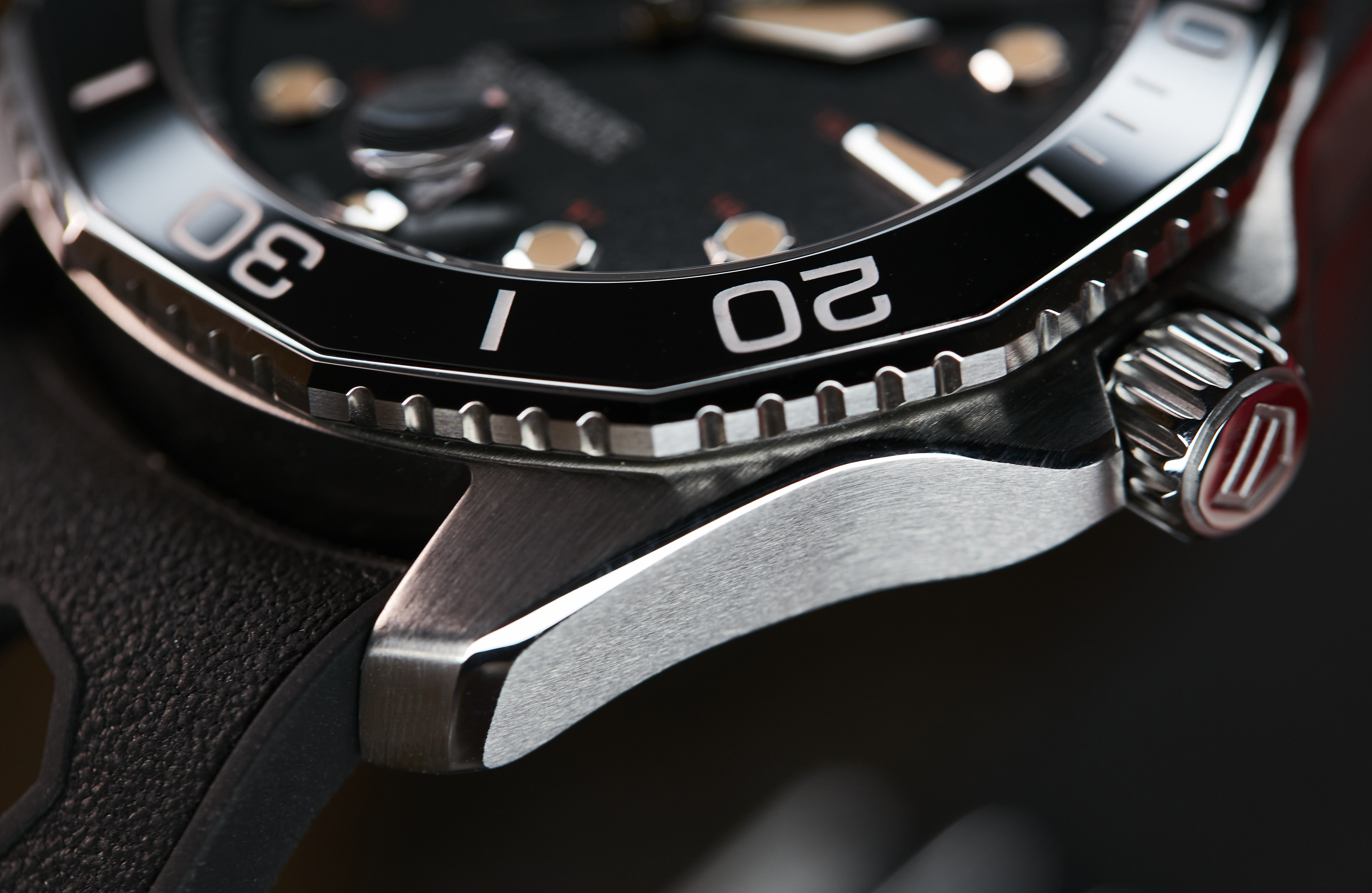 The grade 5 titanium case is quite close to the original size at 43mm in diameter, with polished bevels along the case lines and vertically brushed finishings across the majority of the rest of the case. 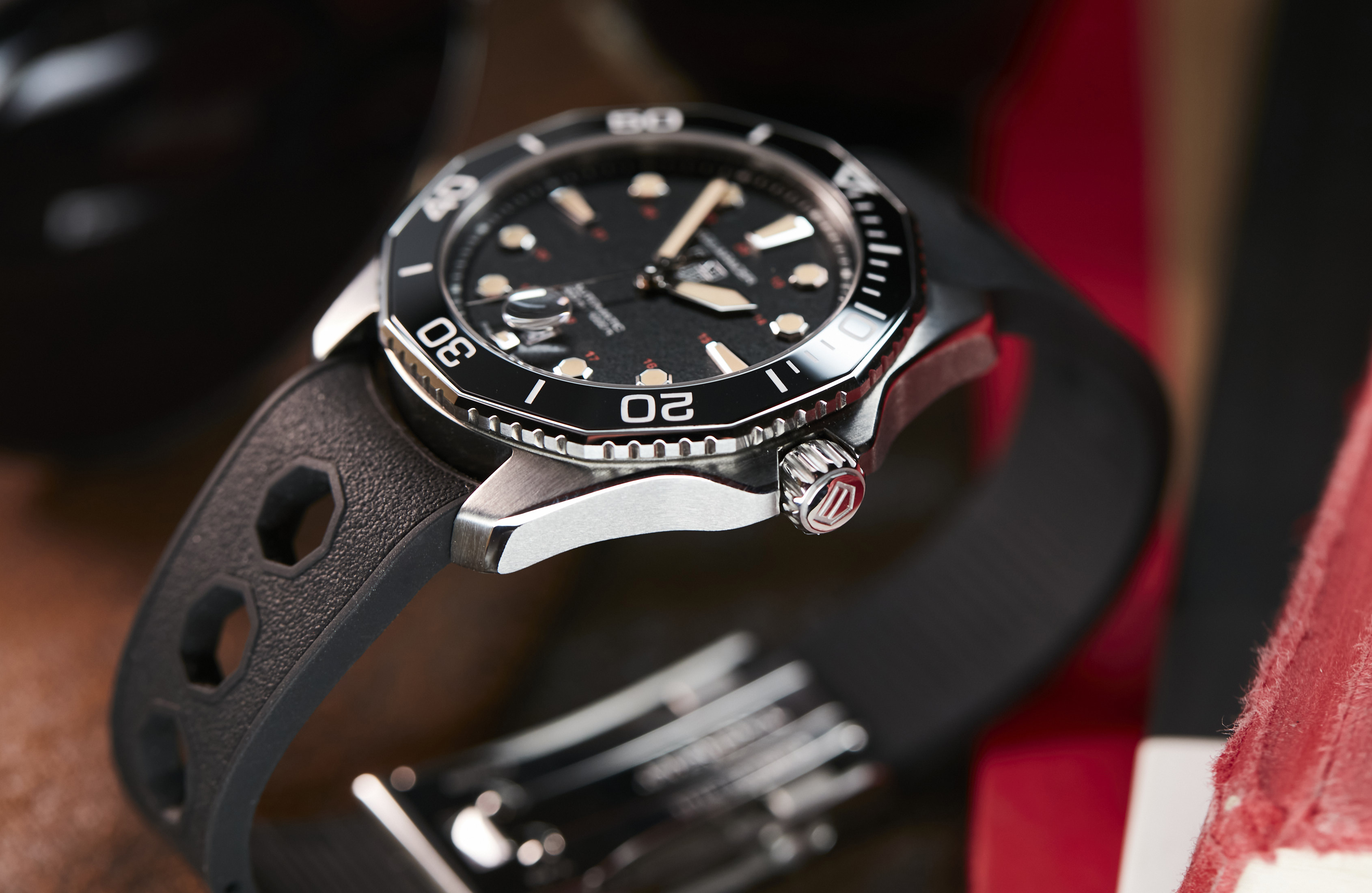 The recognisable crown guards are present, hugging the crown closely to protect equally against coral reefs and stray doorknobs. The solid caseback screws down to guarantee 300m of water resistance and features an engraved motif of a diver from the past. 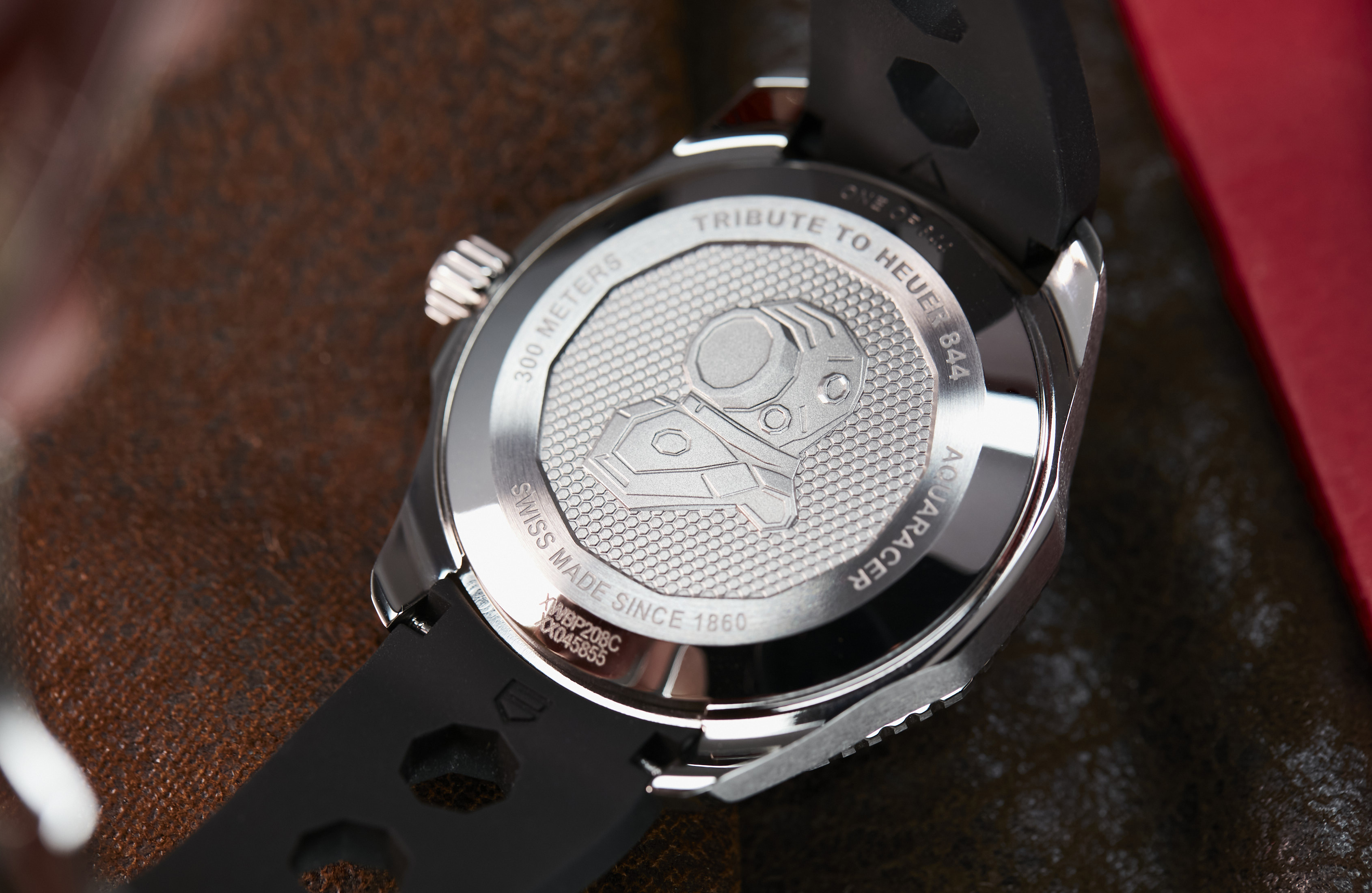 Arriving at the bezel and we have a 12-sided uni-directional design, with a glossy black ceramic insert. It features a 15-minute timer and is a delight to interact with. 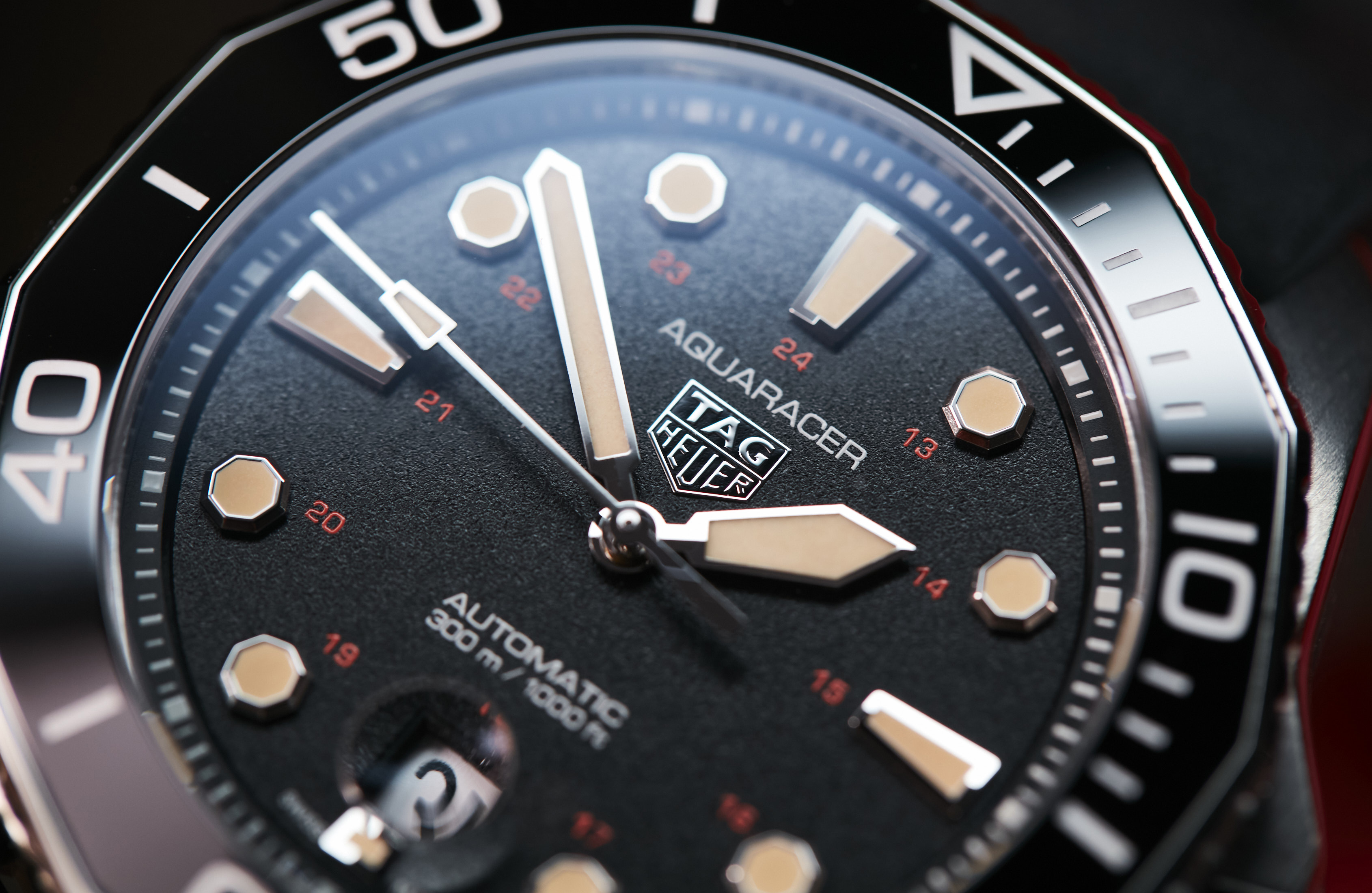 The dial of the TAG Heuer Aquaracer Professional 300 Tribute to Ref. 844 features the same bright red 24-hour scale that matches up nicely against the beige-tinged lume hour markers. Both contrast strongly with the matte black finished dial, making it super legible on your wrist. 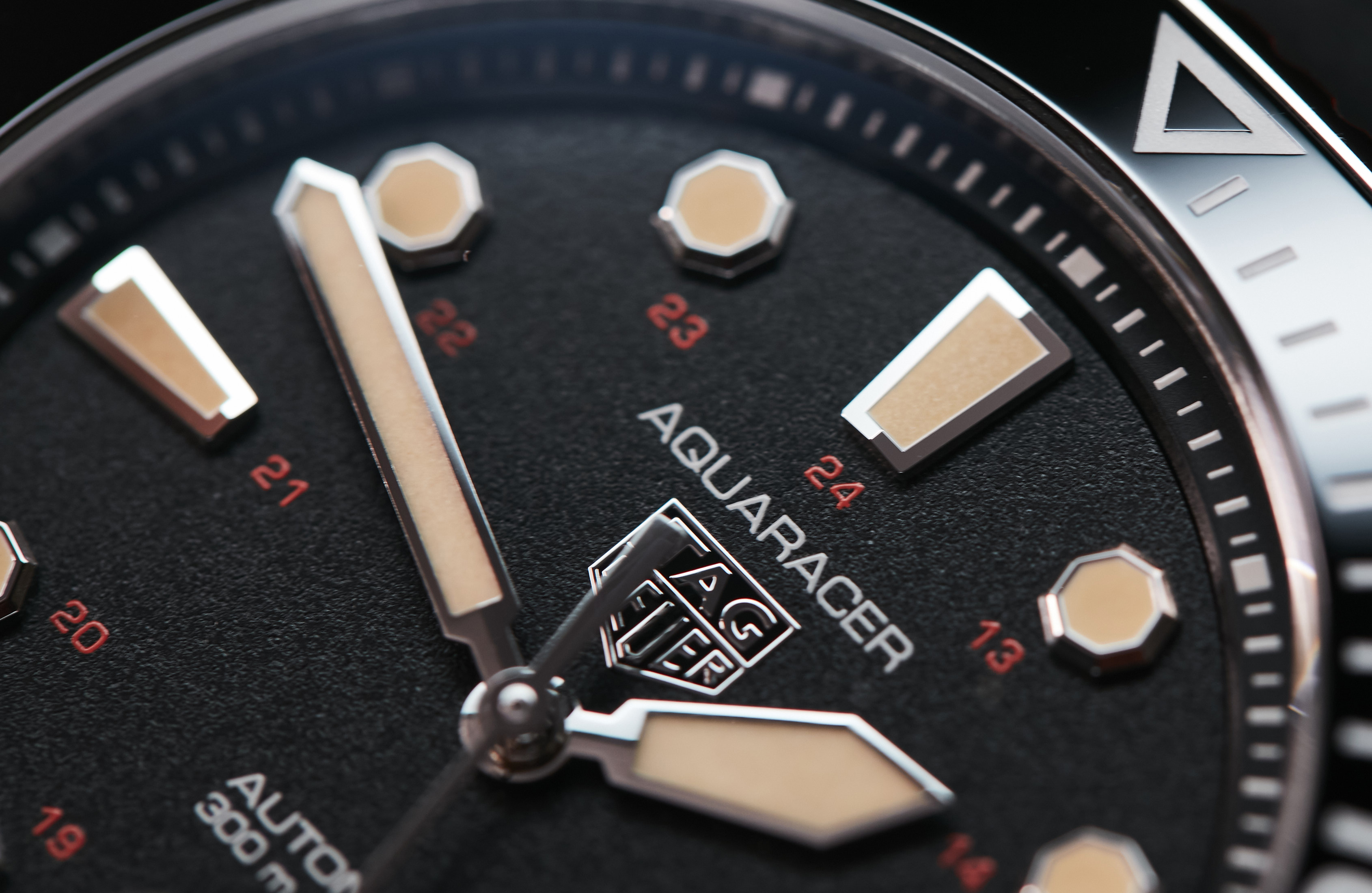 The sword hands are also filled with beige-tinged lume and are a slight departure from the original cathedral and Mercedes hands of the first two versions of the ref. 844. 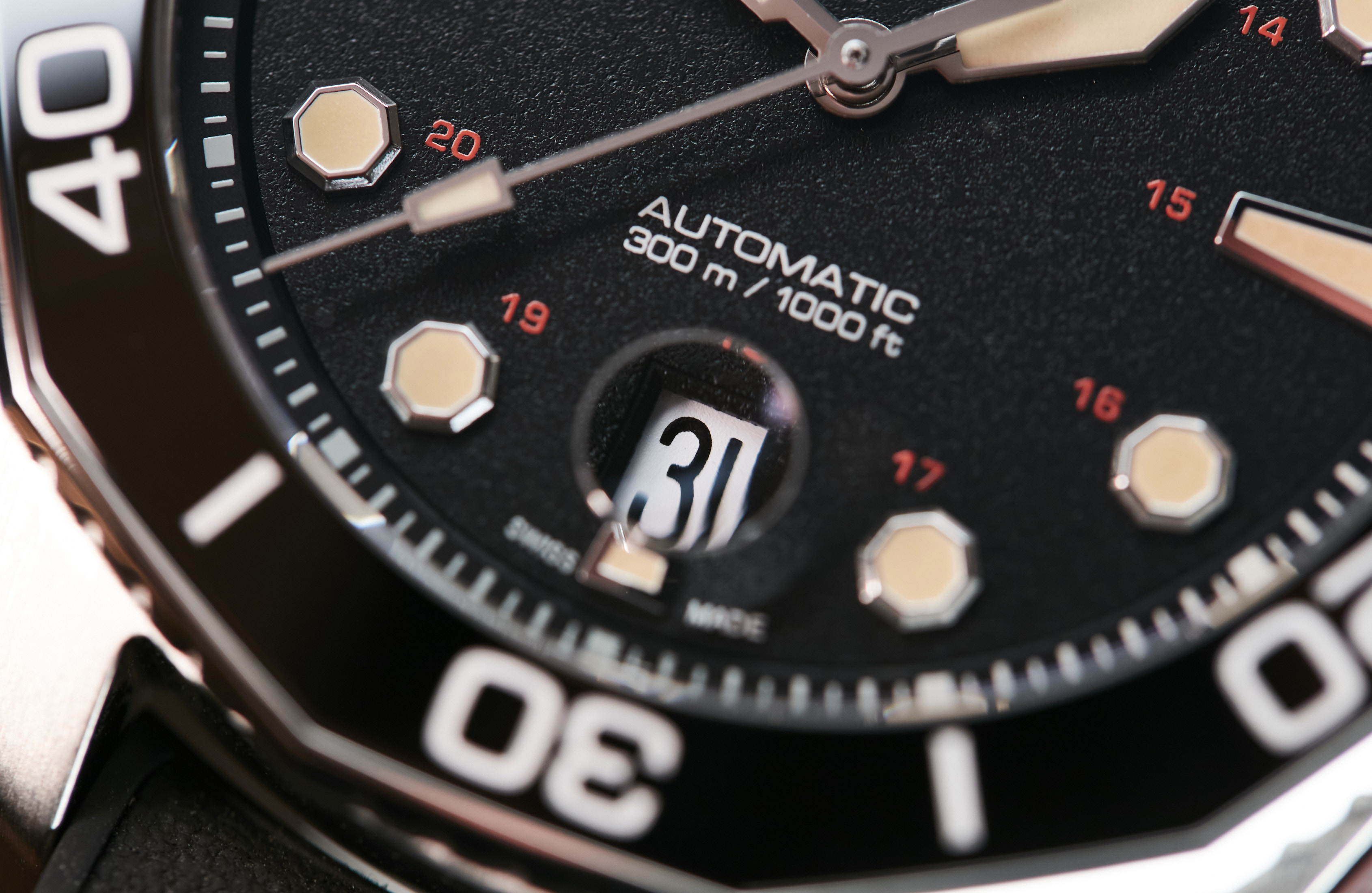 One of my favourite features of the dial is the 6 o’clock date window, complete with cyclops magnifier for maximum readability. It maintains the symmetry of the dial nicely and doesn’t intrude too aggressively into the overall impression of the watch. 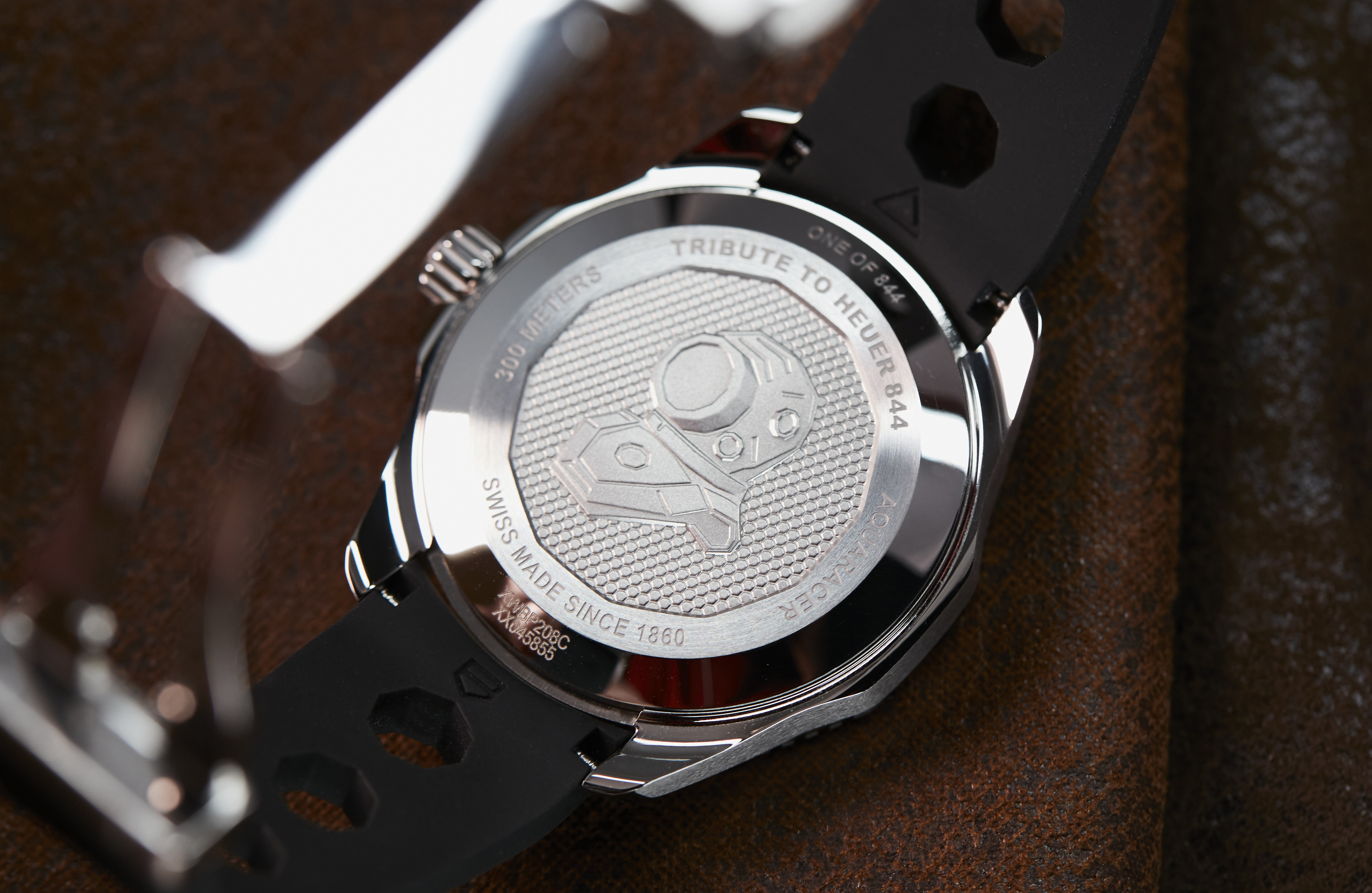 Inside the TAG Heuer Aquaracer Professional 300 Tribute to Ref. 844 is the workhorse Caibre 5 Automatic, that is reliably bulletproof and does just about everything you’ll need it to. It only has a 38 hour power reserve which could be an area of improvement for future modern dive watches, but is enough for a watch you’re looking to wear everyday. 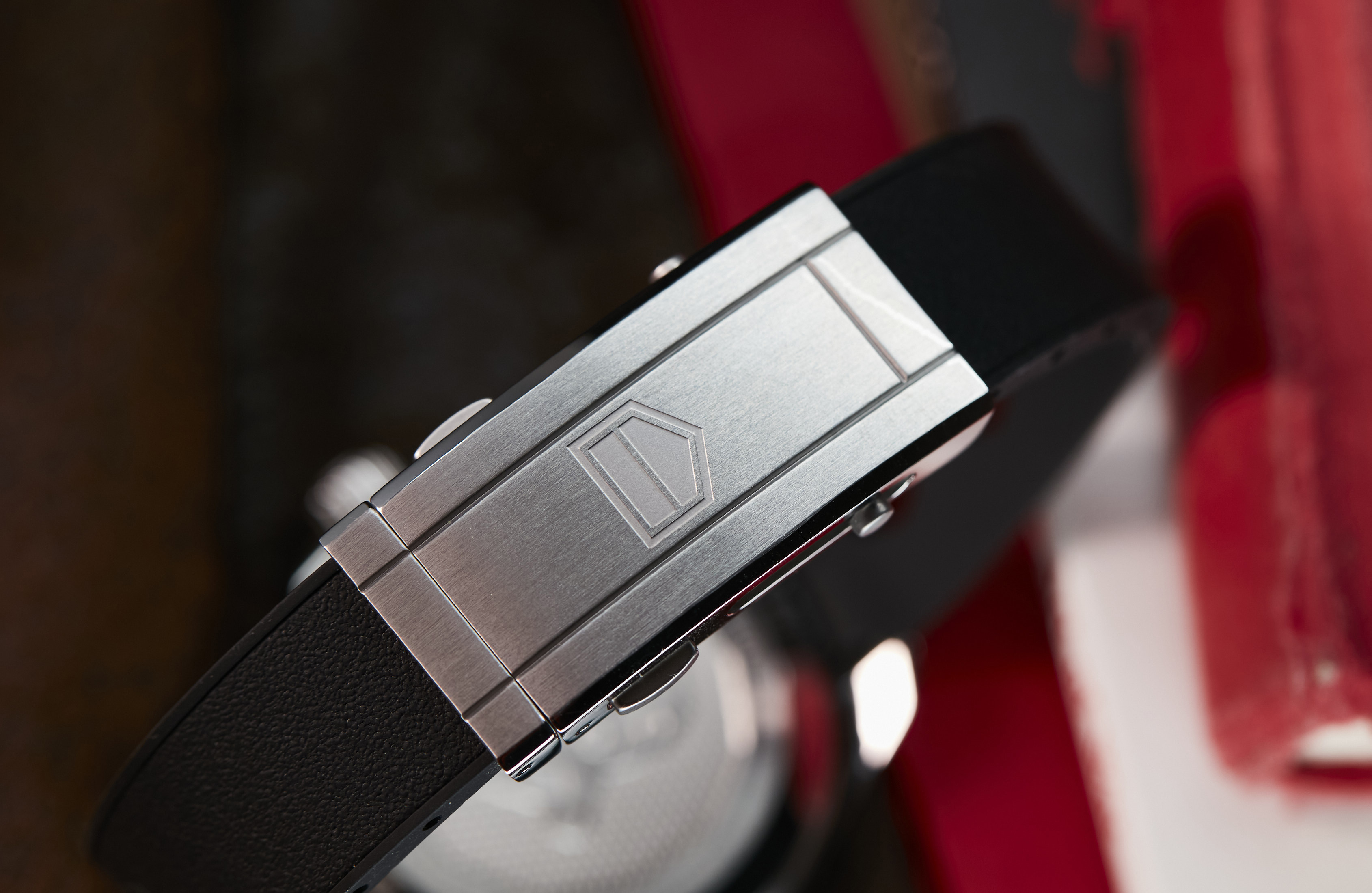 Unlike the original ref. 844 which arrived on a steel bracelet, this reissue arrives on a supremely comfortable rubber strap, secured with a steel folding clasp. 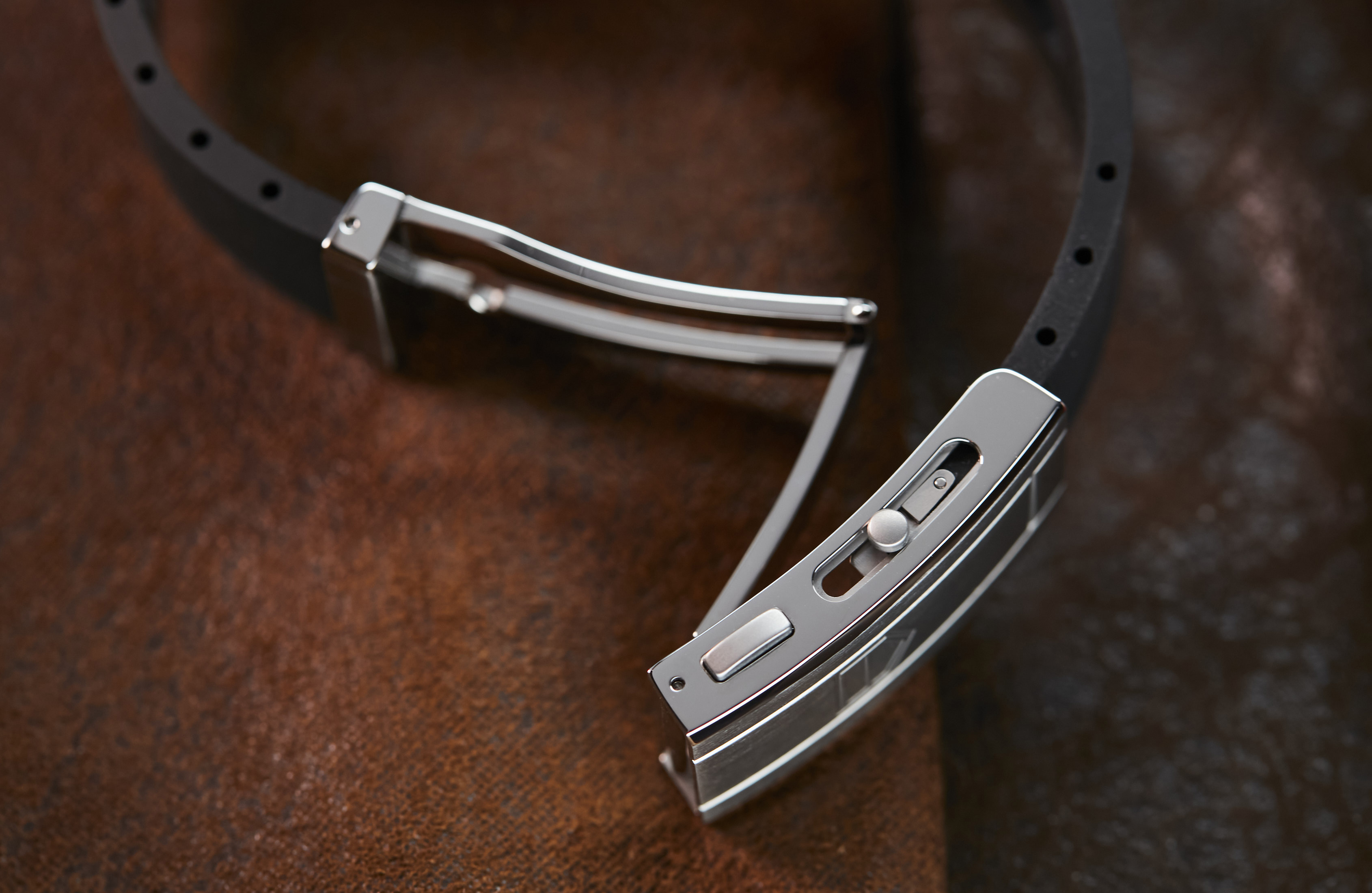 This is a strap that you’ll have to cut to fit your wrist size, but when you do you’ll probably never want to take it off again. It’s a delight to have on the wrist. 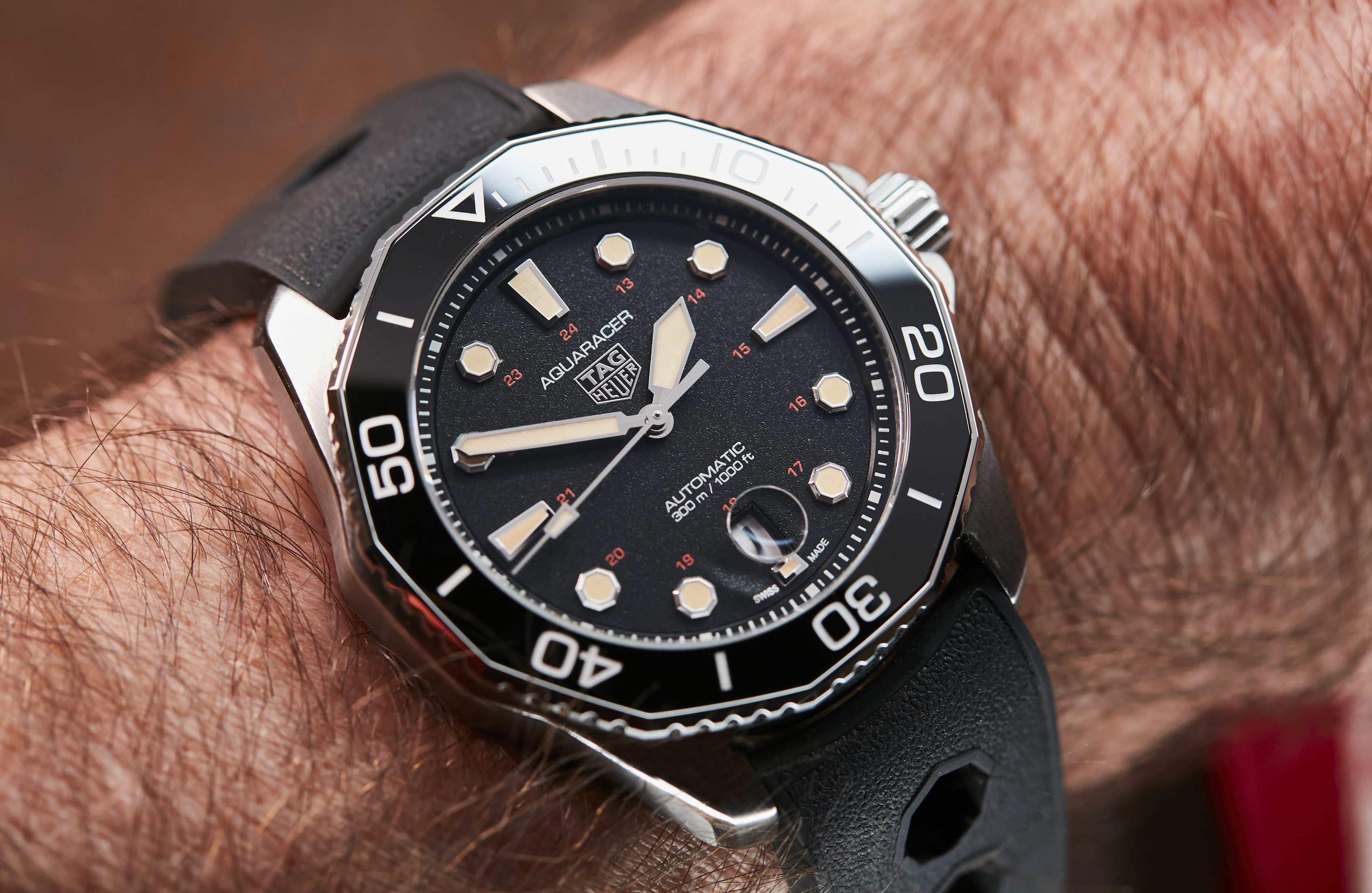 All considered, the TAG Heuer Aquaracer Professional 300 Tribute to Ref. 844 is a well executed reissue of one of the most important references in the archive of the brand. You might complain about the power reserve or the cyclops at 6 o’clock if the look isn’t your cup of tea, but it’s hard to argue that it isn’t a faithful homage to a strong design, with a few contemporary touches thrown in. The titanium case feels light and sporty on the wrist, the rubber strap is extremely comfortable and the overall impression is of a well-considered dive watch. 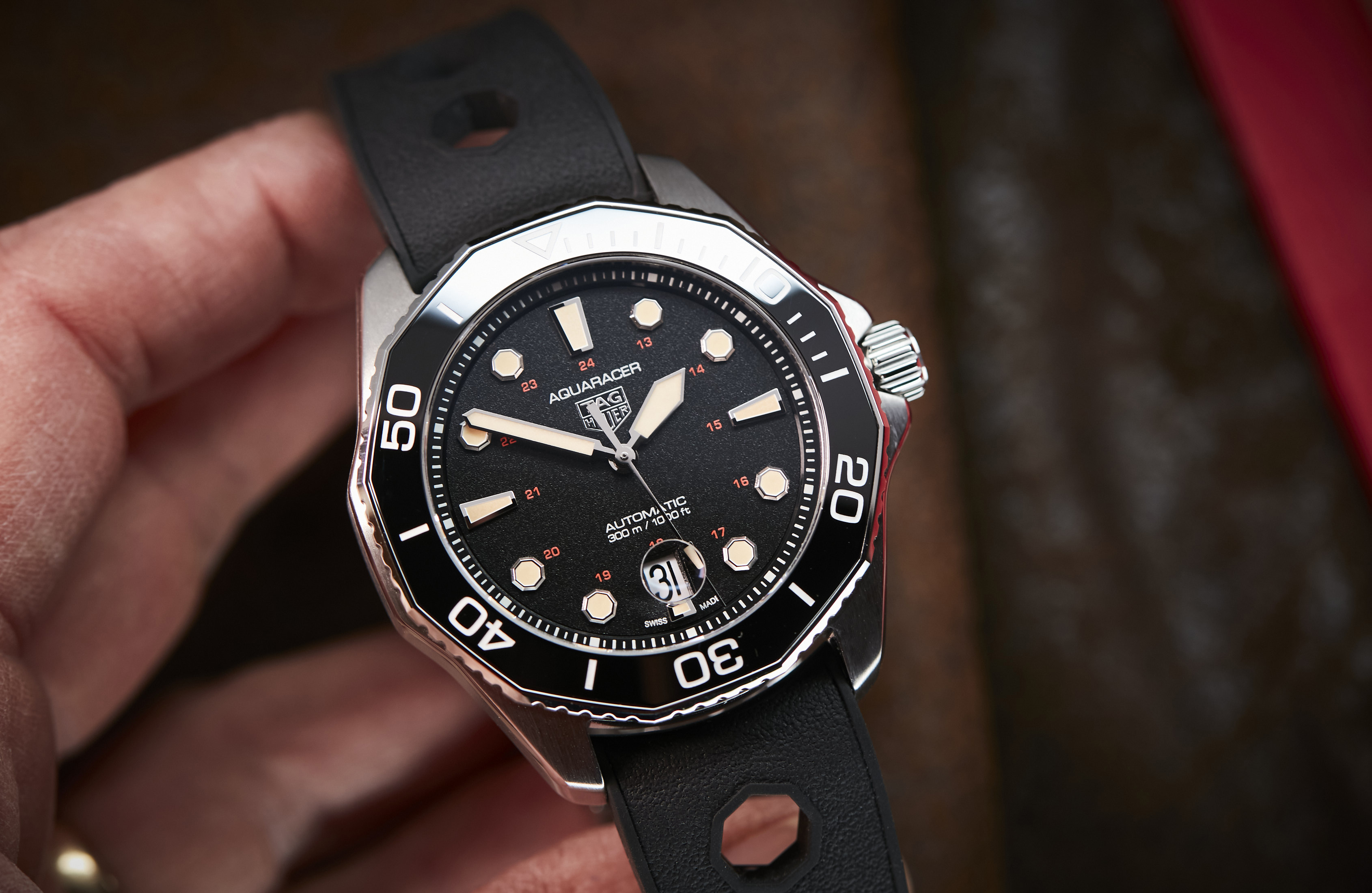