As SIHH kicks off, I’m prepared to bet – yes, even on the opening day – that this chronograph will emerge as one of the top watches of the week. Because it’s just so darned gorgeous and it has a great backstory.

As you may know, in 2007 Montblanc took over the historic Minerva manufacture and began producing some seriously beautiful high-complication watches – notably the ExoTourbillon and Geospheres series. But a question remained: since Minerva was perhaps the greatest chronograph maker of the 20th century, where were the chronographs? 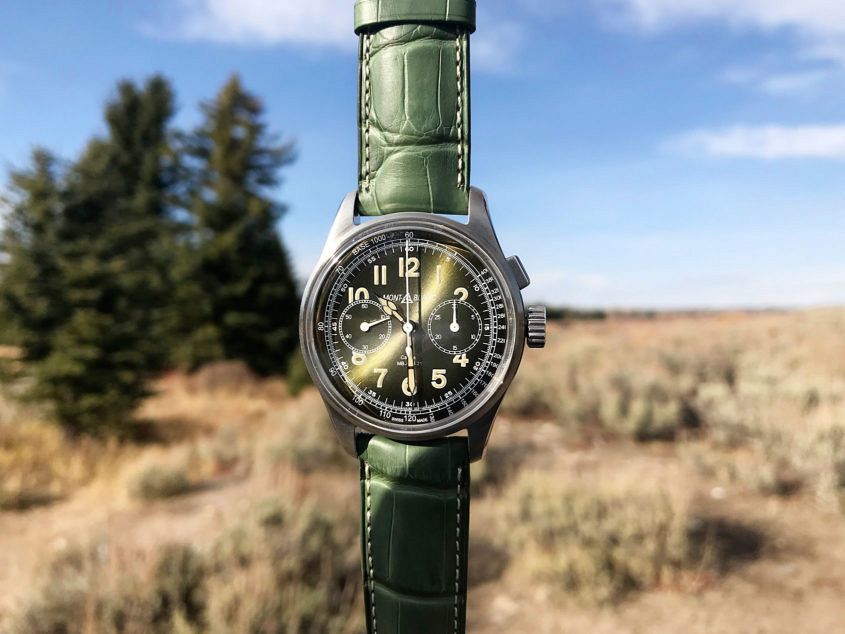 We got the first answer after Jérôme Lambert became CEO in 2013: the Meisterstück Heritage Pulsograph, launched at SIHH 2014 to rave reviews. The styling, based on a 1940s doctors’ watch, was perfectly judged and beautifully executed. The real excitement, though, was the new in-house movement. Calibre M13.21 was derived directly from the revered Minerva cal. 13.20 – a mono-pusher chronograph with column-wheel clutch and horizontal gear coupling (more about this below). Marking the 90th anniversary of Meisterstück, it was a limited edition of 90 pieces. And the movement didn’t appear in any subsequent model. Was that it? 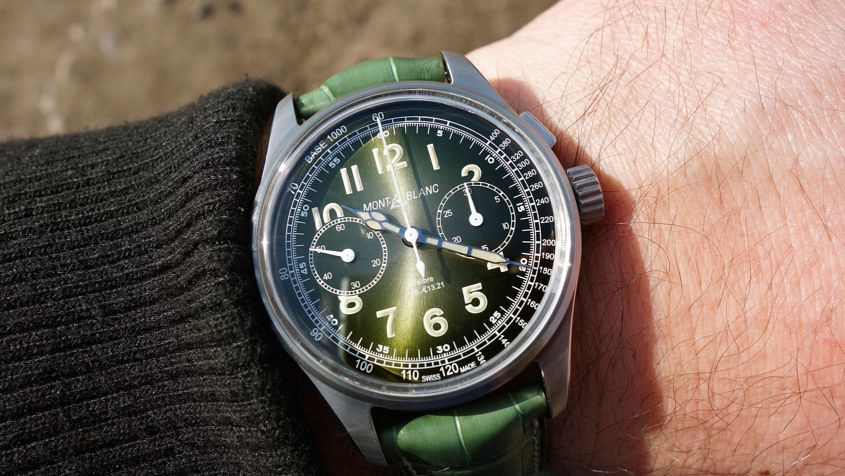 Yes but no. At SIAR in October 2015, Montblanc introduced the 1858 Chronograph Tachymeter Limited Edition, anchor of a new collection called 1858. Two versions: steel case-blue dial and pink gold case-black dial. Another new mono-chrono movement – MB 16.29 – this time derived from a pocket watch calibre developed by Minerva in 1929, which dictated the case diameter of 44mm. More versions have followed, including the insanely gorgeous unique piece made for Only Watch, with bronze case, green dial and green alligator strap. 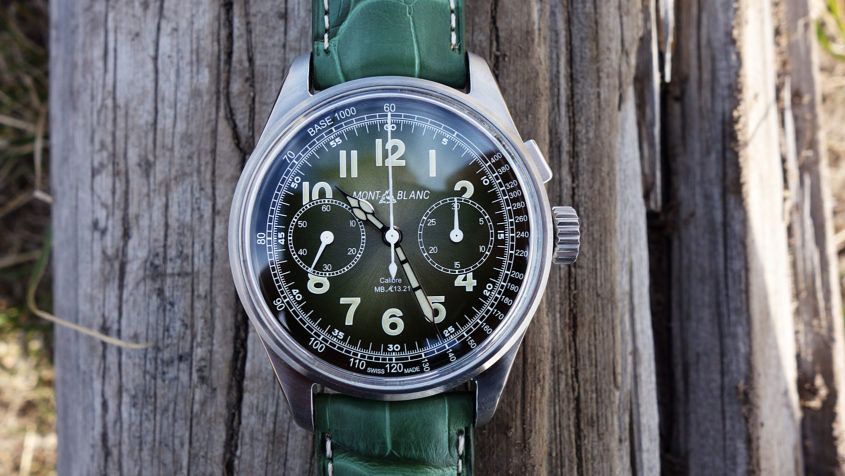 And here’s why the new 1858 Monopusher Chronograph is such a winner: it’s the love child of the Only Watch piece and the 2014 Pulsograph and it has taken the best of both gene pools.

The movement is that wonderful M32.21, exactly as it was in the Pulsograph. With all of the gorgeousness of Minerva’s curvy V-shaped bridge and swooping, curling levers. And truly top-drawer decoration and hand-finishing. Including Minerva’s signature arrow-head end on the main chronograph lever (serving no practical purpose, its sharp angles exist purely to show off hand-finishing skills) and the words Minerva and Villeret engraved on the bridge. With a classical 18,000 vph frequency and, in proper chronograph tradition, no date. Did I mention how wonderful it is? Finally, boys and girls, take note: because it’s smaller than the 16.29, the case is smaller. A tidy 40mm that sits really well on the wrist (even on mine). 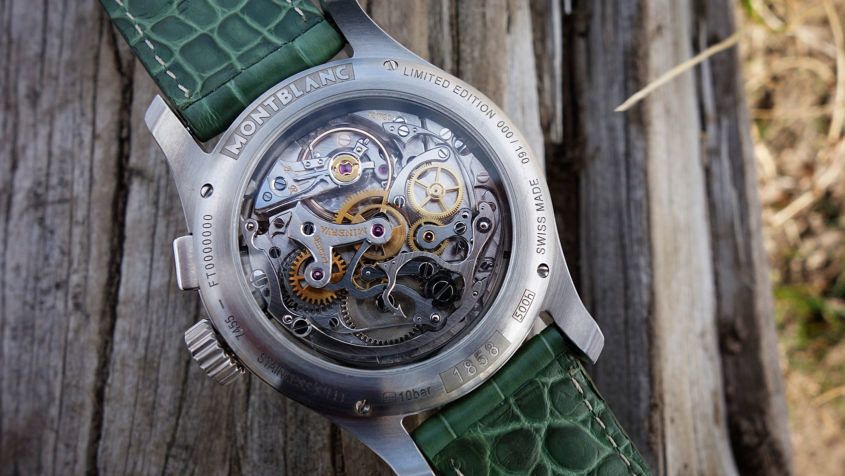 The calibre dictates that (unlike on the ‘Big’ 1858 Chronograph) there’s a separate chrono pusher at 2 o’clock and a standard winding crown. As it was on the Pulsograph, the pusher is a joy to operate – silky-smooth and really crisp – while the heavily notched crown is a pleasure to wind. 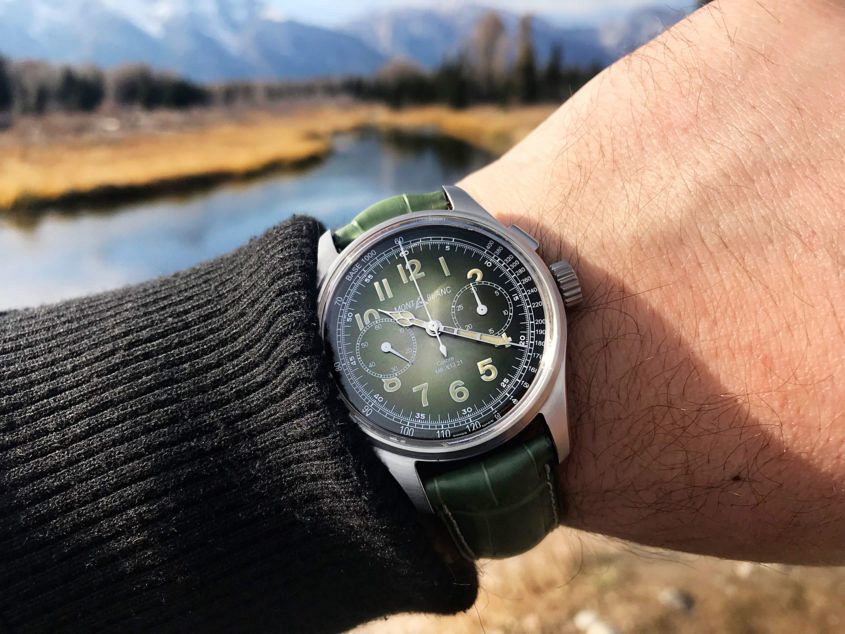 Montblanc has chosen steel for this case – and it looks fantastic with the “Only Watch” colours of the dial and strap. That strap! Montblanc has been really ‘working’ its in-house pelletteria of late, making straps a fully thought-through element of the watch design, rather than simply an add-on. This green, with the off-white stitching nails it. That dial! It’s a warm champagne-tinged green, with blocky white Arabic numerals that look nicely assertive against the subtle fumé effect and sunray-brushed texture. Because of the smaller calibre, the chronograph subdials are much closer together than on the ‘Big’ 1858 – and yet the layout loses none of its bigger cousin’s character. The sharp-eyed will notice that the red highlights (30 and 60-second markers and tip of the chronograph hand) of the ‘Big’ 1858 are missing but all other details are the same: the cathedral hands, the clean and legible tracks on chronograph registers and tachymeter scale, the retro font of the Montblanc logo and the cursive ‘M’ (from the original Minerva logo) in the calibre name.