Ok, so the boat wasn’t exactly capsizing. But it was rocking. And the almost unlistenable audio of the interview confirms it was very, very windy when we interviewed the CEO of Edox Alexandre Strambini on the MV Extreme in Sydney Harbour in December of 2014.

Alexandre Strambini is not the kind of person you’d forget meeting. He has piercing light blue eyes, a youthful demeanour for a CEO and – prepare yourself for this – he’s beaten Roger Federer. In tennis. Twice. But somehow, I managed it. 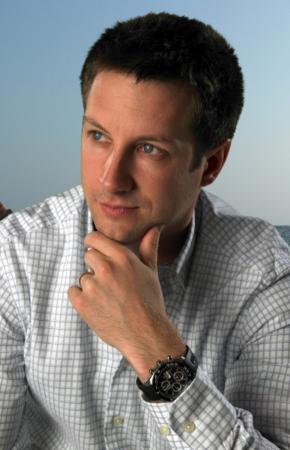 When we met for a second time – after, apparently, shaking hands and exchanging pleasantries at Basel earlier this year – onboard the MV Extreme in Sydney Harbour I was frankly amazed that he hadn’t made a stronger impression. But that might be because the person who arranged the meet on both occasions happened to leave out the beating Federer bit.

So, this time, in set two, with my facts straight – yes, Alexandre heads up Edox, yes, he played Davis Cup tennis for Switzerland, and yes, he is among Federer’s closest friends and confidantes, after acting as a ‘big brother’ figure early in his career – I was able to get the most out of our time.

The interview took place on the upper deck of the boat on a gusty, frankly horrible Sydney day. The rain and wind didn’t dampen Alexandre’s spirits though, with the Opera House in frame, we discussed everything from Roger to rewriting the modern history of a brand that was born over 130 years ago. A quick readers tip, if you love tennis, read the first half. If you love watches, skip to the second. If you love both, you may well enjoy the lot….

T+T: Alexandre, I just discovered we have a mutual friend in common….

T+T: Roger! Roger Federer. (This, by the way, is a complete lie, though it feels like the truth. I have interviewed Federer, once, for GQ for a sum total of 14 minutes. But it was meant to be 10, so that means we’re clearly mates, right?)

AS: He’s your friend? You know Roger?? (He said this disbelievingly, but respectfully. There was definitely a second question mark there… Once I explain the above exaggeration, he continues) He is my friend. I was practicing with him when he was starting his career. Were we close? I actually made him cry once.

AS: Yes, we were practicing and I was pushing him hard and he didn’t like it. I said some things. Later though he said that this was a big moment for him in his career. He said I was like a big brother to him in the early days.

T+T: Have you asked him about being an Edox ambassador?

AS: No! What is incredible with Roger is the relation between him and me, even if we don’t see each for six or eight months, when we again are face to face it’s like we have been talking for the last one year every day. It’s a friendship. We don’t really speak about tennis much. We speak like friends are speaking. And now that we have watches in common we can talk about that. I feel he likes the watches. It’s interesting to be able to communicate with him about my job now. I don’t know if it’s one of his passions but you can feel he loves watches. 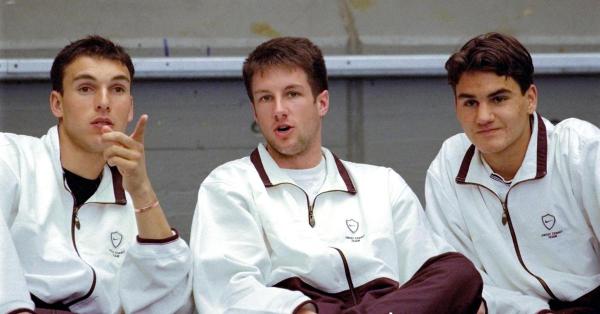 This is happening. From left to right we have Lorenza Manta, current CEO of Edox, Alexandre Strambini and Roger Federer. For. The. Reals.

T+T: Back then, you were part of the Swiss Davis Cup team?

AS: Yes, I was in the team for five years. It’s hard to explain the connection you make with your teammates in this environment. When you are a pro tennis player you are very isolated. You are completely isolated from the rest of the world. And then, you spend a week every year with your friends in a team playing for your country. I could not believe the feeling between us could be so strong. Once you realise you play for the country and all of your country is watching you…. Incredible. And this was when we’d just lost the final in Provost, so we were a strong team.

T+T: Why did you retire?

AS: I get asked this question a lot. And to be honest sometimes I ask myself the same question. Five years after I retired I look at the top 20 players. I had beaten 15 of them. But at the time I retired, it was what I needed to do. I met my wife, I lost my motivation. It was what I needed to do. Sometimes in life you just need to make a move in a certain direction, and this is where I wanted to go.

T+T: Let’s talk about Edox. Your father bought the brand in 1983, was that a change for your family? Was the sudden presence of watches a new thing?

AS: Not at all. Watches have always been around my family. The only thing that is not expected about my family and watches is that I chose to play tennis. My grandfather was a watchmaker. At one point he worked for Omega. And my father was in the private label business of producing watches for brands like Bulova and many others for a lot of years. (‘Private label’ refers to the practice of producing generic style watches and then branding them by simply “putting a logo on the dial”. According to Alexandre “many many brands were doing this at the time.”) Buying Edox was not anything new for our family. As for the brand itself, it was a pretty famous brand in Switzerland. But between the 70s and 80s almost nothing happened with Edox. But my father had the feeling this private label business would end. He felt that something was changing and he bought Edox. It took another 10 years for him to come up with a new direction for the brand. When my sister joined the company in 95, this was the real restart of EDOX and I came in 98. This was the start of the new Edox. 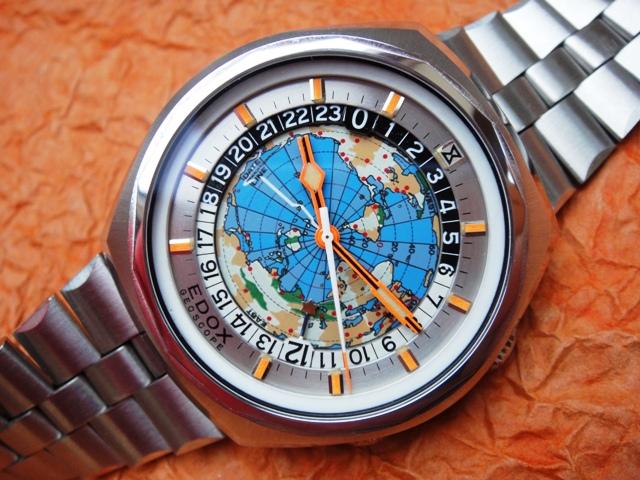 Along with the Delfin, one of our favourite vintage Edox pieces, the extraordinary Geoscope GMT Worldtimer from the way, way back: 1970

T+T: What are some of the Edox milestones in terms of achievement since 98 when you took the helm?

AS: I think things like producing the slimmest wrist calendar in the world with our own quartz movement. It was a joint venture with a small swiss company and that was the start of having something unique. It was doing well. For the first time we had the feeling we should be doing something more young in terms of design.

T+T: And what about milestones that you can take full credit for?

AS: The biggest change I made was in 2006 when we started our association with Class 1 Powerboats as a sponsor. Then we launched completely different models – it was 100% different from what we were doing. We went from classical watches to sport watches, which was more from my world of elite sports. From 2006 the growth has been big every year. 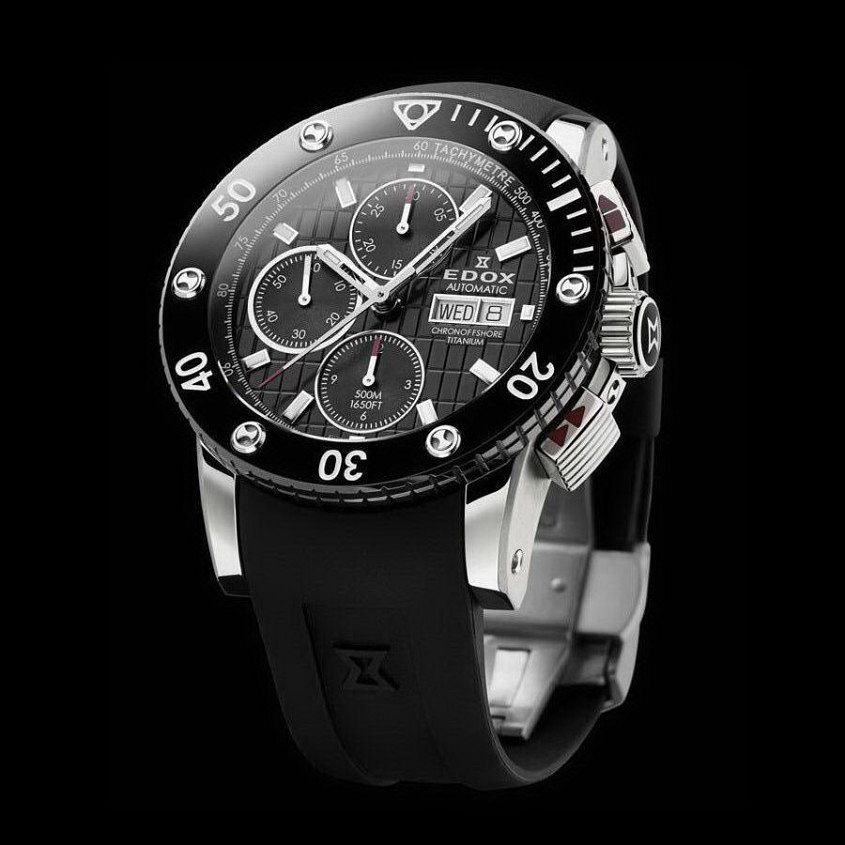 T+T: Why did aligning with professional sports make sense to you?

AS: I think to do sport watches you need to be involved in certain sports. And then you can give emotions to the people. You can also give emotions with classical watches, of course, but it’s different. What I like to see is when somebody is looking at one of our watches – like when you were looking at the Hydrosub – and you can see that it moves them in some way. It gives them emotions. It makes them become curious. Like the Master Lock you were looking at on the Hydrosub is actually to protect the weakest point on the watch which is the crown. 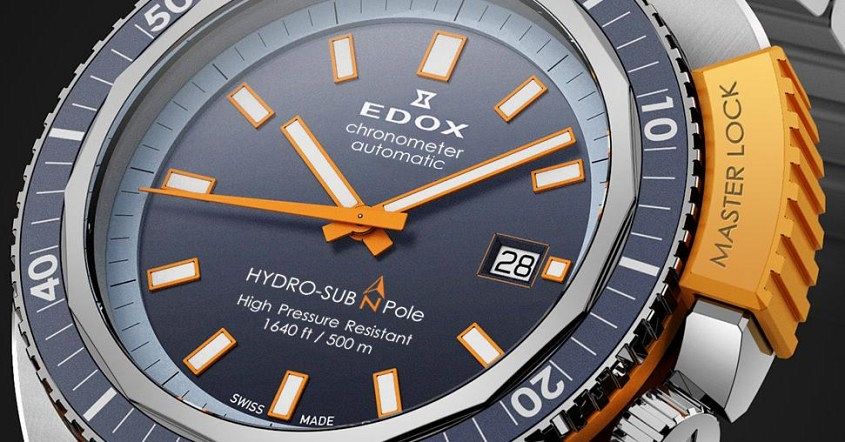 The Edox Hydrosub, with its unusual, eye-catching Master Lock

T+T: Your tagline is ‘Timing for Champions’. What does that mean to you?

AS: We have a champion in each of us. You have to find what to believe in yourself. What part of you can be good or even the best at something. This tagline is to remind people and to tell them, yes, you are a champion. We want people to believe in themselves.

T+T: What were some of the technical challenges presented by the Grand Ocean Automatic Chronograph?

AS: This was the most difficult watch we’ve ever produced because of the case construction. There are 20 different parts to it. So this was very expensive to produce, which was the central challenge; how do we do it and keep the price in our price point? It remains the most expensive range in our collection. 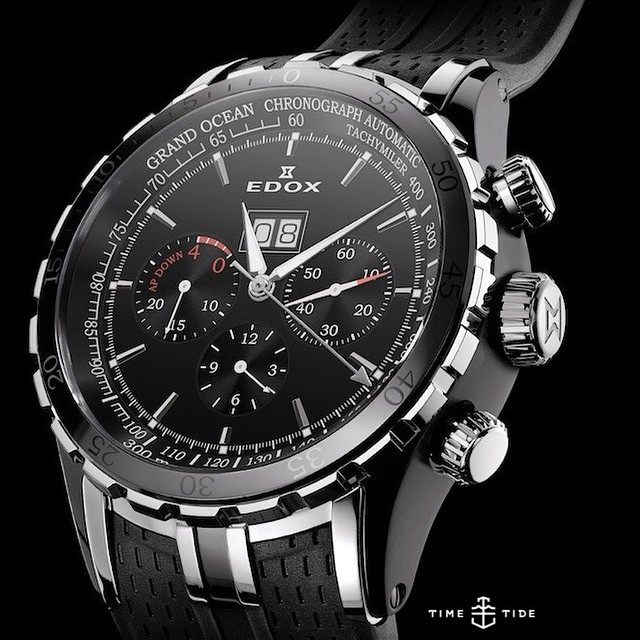 T+T: How long was it in development?

AS: It was over a year in development, which was an entirely new thing for Edox. In 2006 we had to change the strategy of the brand to accept that we needed to make time to develop watches over several months or a year. It was new for us. Before that we were producing classical watches that were not simple to do but they were existing designs.

T+T: We’re on this boat to also celebrate the Extreme Sailing Series, which Edox also sponsors along with the Powerboats and the Dakar Rally. Why is Extreme Sailing a good fit with your brand?

AS: Edox is a not a brand that wants to partner with something too luxurious. We are an independent brand and we are – I hope – still simple people. We want to make robust, beautiful watches that can withstand any treatment and still look beautiful. We want to be competitive, professional Swiss watches, that also have an excitement about them – like these amazing series and events.