Editor’s note: The darling of the independent watch space, MB&F show no signs of slowing their release of weird and wonderful watches. Timepieces that often elicit a confused reception at first glance, MB&F clocks and watches become more delightful the longer you look at them, as you realise the playfulness at the heart of their designs. Let’s take another look at why the brand matters, even if you aren’t likely to become a customer. 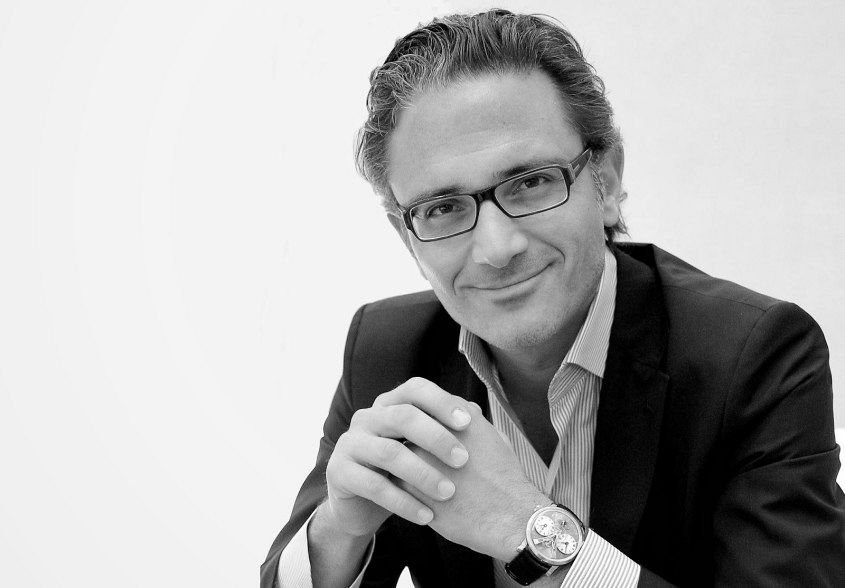 Recently we were invited to Sydney as guests of The Hour Glass for the hotly anticipated launch of MB&F (Maximilian Büsser & Friends) Horological Machine 6, aka the ‘Space Pirate’. In our conversation with MB&F Head of Communications Charris Yadigaroglou we discovered a watch brand almost like no other. Writing up the interview I was struck by the role a brand like MB&F plays for the wider watch industry. Their ability to live free creative lives — and start their creative process at a wild, completely pre-rational idea, instead of working around the limitations of a watch movement — leads to a singular and unique stream of watchmaking. We walked into the meeting room in the Sydney CBD office curious, if not a little sceptical, and walked out supporters. Rather than just write up the interview, I decided to pen a list of reasons that MB&F matter. All 11 of them …

1. THEY HAVE A FLAGSHIP BOUTIQUE THAT SUMS UP WHO THEY ARE, WITHOUT WATCHES.

“The MAD gallery has become huge, much bigger than we ever expected. We didn’t expect so many people to come into the gallery and we didn’t expect people to actually buy any pieces. When we opened, we didn’t even have a credit card machine. We were at a total loss. And yet now, for my department, the marketing department, it’s become about half of our daily activity.” 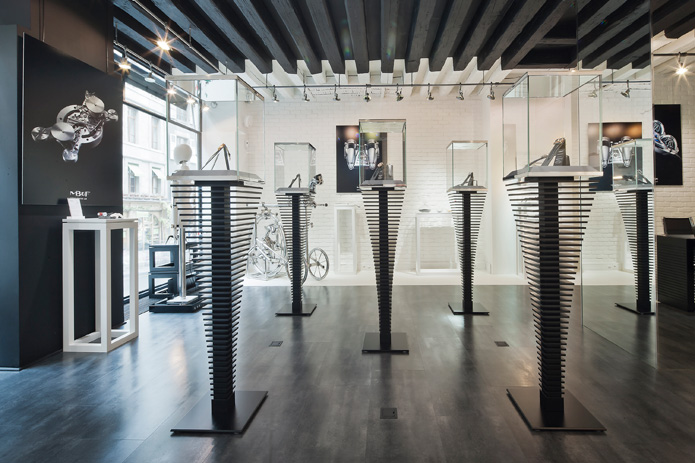 The MAD Gallery in Geneva

2. THEY BELIEVE IN THE AUSTRALIAN MARKET’S POTENTIAL TO SUPPORT INDEPENDENT WATCHMAKERS.

“It’s growing. It’s still at the very beginning for independents and it’s even more difficult for extreme independents with unusual pieces like us, but just yesterday morning I was sitting next to an MB&F customer (wearing a rose gold Legacy Machine 1) so that feels very good. It takes time.” 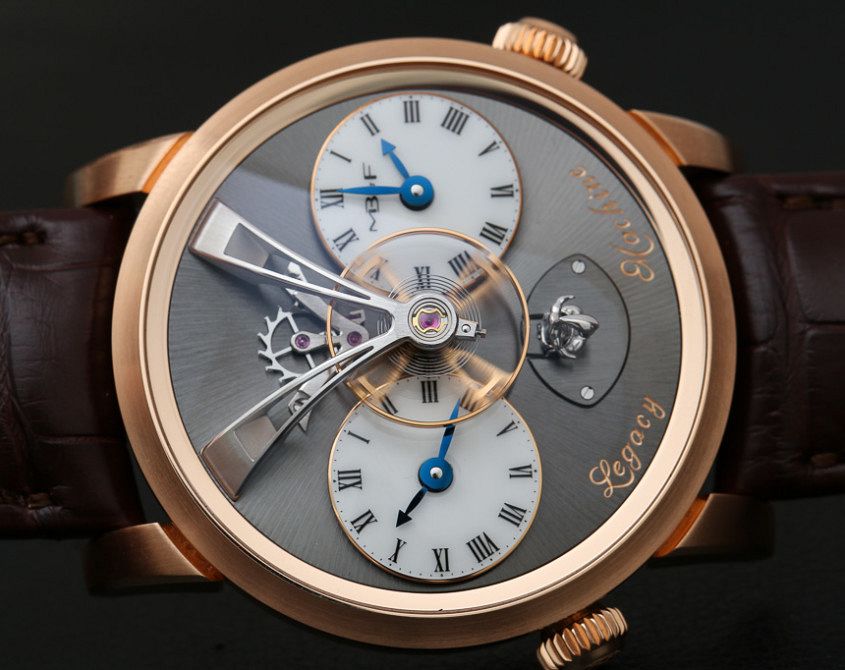 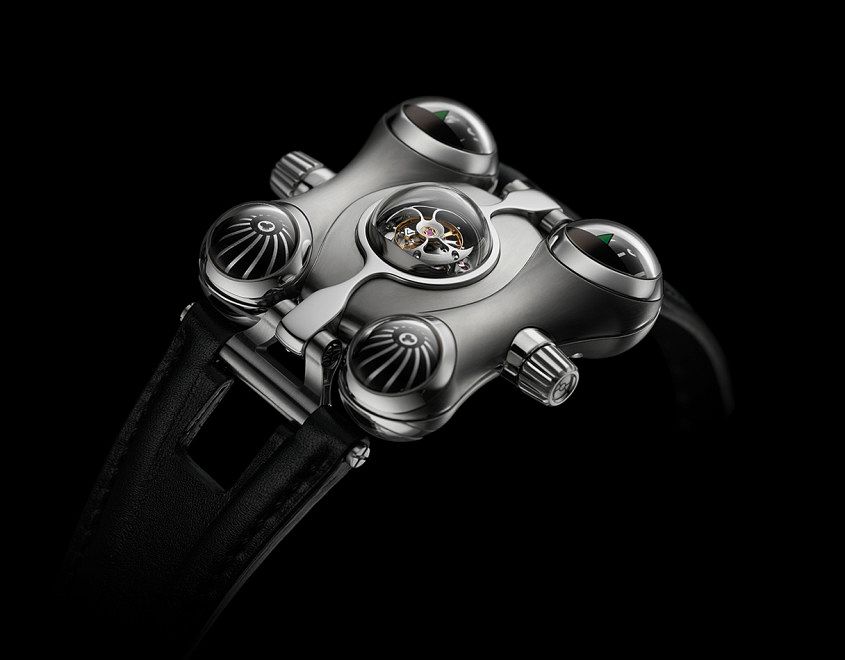 A view of the rear turbines of the Space Pirate.

3. THEY KNOW THEIR VISION IS GOING TO TAKE SOME TIME TO TAKE HOLD. THEY HAVE PATIENCE.

Shwu Ching from The Hour Glass: “This particular customer took two and a half years. And he came back in that time to try other pieces. He loved the piece but he was still wondering, ‘Should I? Shouldn’t I? Or should I just buy something that’s more safe?’ He was very happy when he picked up the piece, he even sent an email directly to the brand.”

4. WHEN YOU BUY AN MB&F YOU CAN CONTACT MAX BÜSSER DIRECTLY (AND HE’LL ALMOST CERTAINLY WRITE BACK).

“They like the contact with the CEO when they buy a piece and when we come round to Australia again we’ll know them and remember them. It’s a closer contact. After-sales contact does happen as well, but that’s ok, as long as we look after them. It’s a good opportunity to build the reputation, so we pay a lot of attention to that. As long as you treat everyone fairly, it’s ok.” 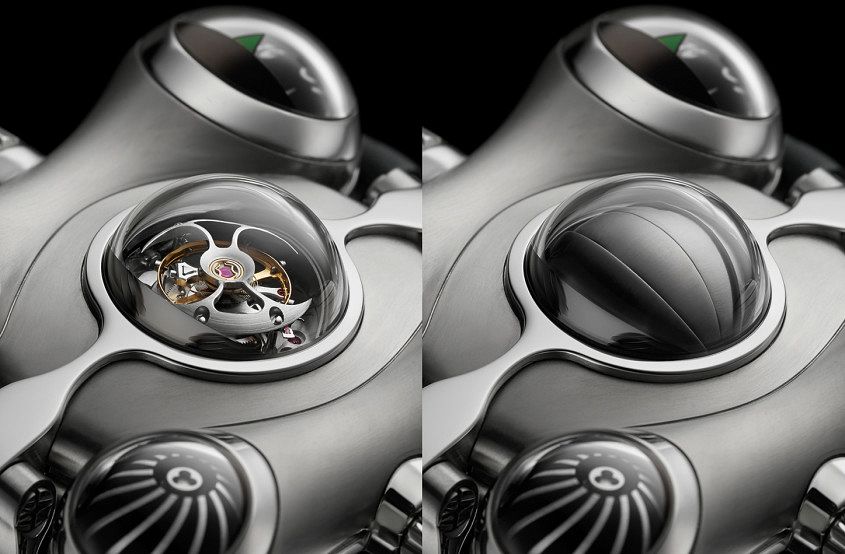 5. THE MB&F SPACE PIRATE HAS A ‘HYPERSPACE MODE’ CROWN. THIS IS NOT A JOKE.

“It’s a spaceship, right, so there has to be a hyperspace mode, right? (WE NOD) By the way, that shield is a nightmare to produce. The way those blades come up and cover the tourbillon – it seems very simple, but it’s not. It’s four different blades and they’re microns thick, they’re all milled from titanium and they are also made from solid blocks of titanium. They’re not pressed or moulded.”

There’s an internal saying we like to say when we get comments like that. It says, “If everyone likes what we do, then we’re doing something wrong.” 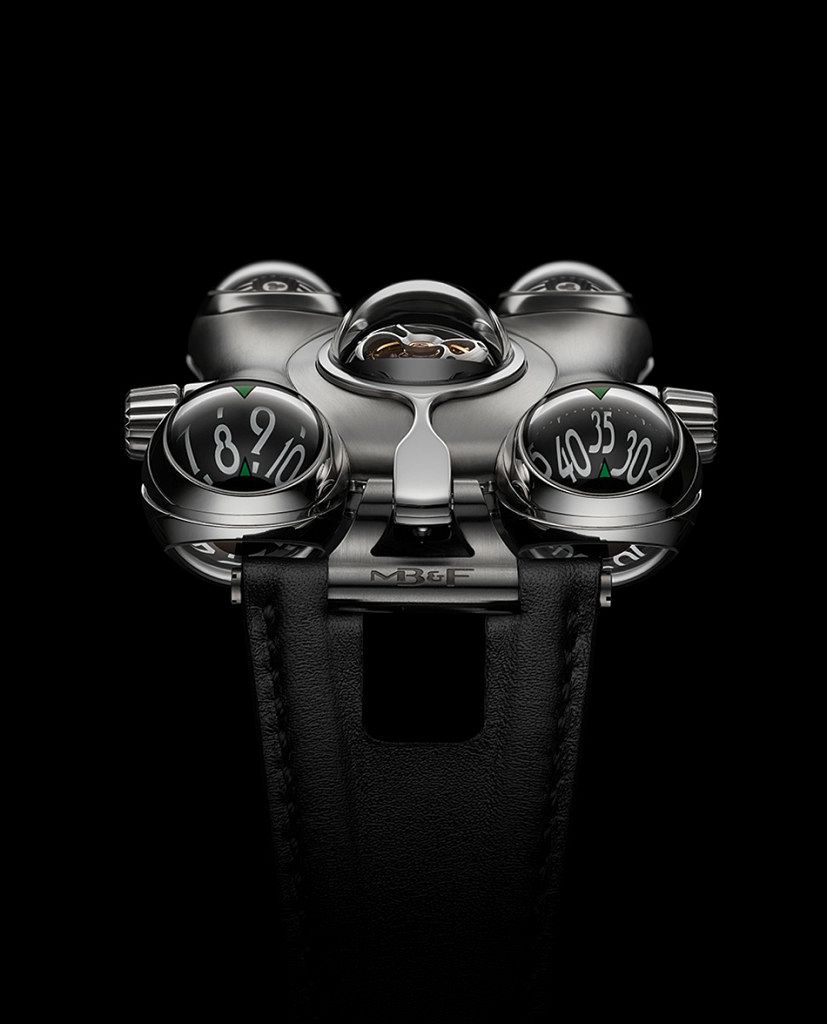 The incredible space oddity that is the Space Pirate

6. THEY KNOW A LOT OF PEOPLE THINK THEIR PIECES ARE UGLY, AND THEY’RE TOTALLY, TOTALLY OK WITH THAT.

“We accept that, because the first reaction to our work can sometimes be, ‘Ok, that’s not very pleasing.’ But there’s an internal saying we like to say when we get comments like that. It says, ‘If everyone likes what we do, then we’re doing something wrong.’ It’s polarising and that’s ok. What we don’t accept is when people say the craftsmanship is not good. That we don’t agree with. And that’s when we enter the discussion and say, ‘Guys, that’s not true.’ Fortunately, it doesn’t happen very often.” 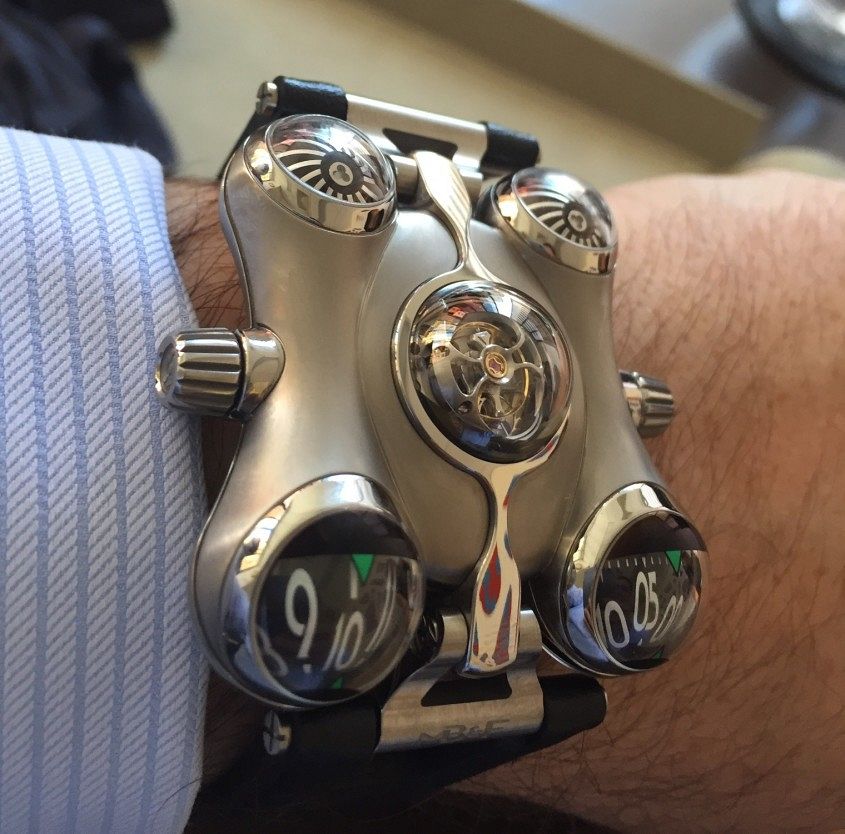 While they’re known for crazy styling, comfort on the wrist is of equal importance.

7. THEY TEST THEIR OWN WATCHES, BUT ONLY UNDER LONG SLEEVES.

“Typically, the final prototypes are ready 6-8 months ahead of the launch. We wear them ourselves. We’re careful about not getting photographed, but to be honest it’s pretty much risk-free. We’ll wear them slightly under the sleeve, which is fine. Compared to a big Panerai or something, it’s fine to fit under a sleeve. We have to make sure it wears nicely – comfort testing is important. Before that there’s a series of technical tests of course.”

8. THEY BELIEVE THAT A MECHANICAL WATCH IS NOT A COMPETITOR TO A SMART WATCH.

“It’s not the same thing. We’re convinced that many of our customers will buy smart watches, absolutely. They will have fun with them but it’s not the same product. The function of a mechanical watch is not, primarily, to give time. It’s a piece of mechanical art on the wrist. It’s as simple as that. There’s no rational reason to buy a mechanical watch, not one. You could buy it for status, and that’s alright. That’s a way to show which brands you like and so on. And the other reason to buy it is to show your appreciation for mechanical art and human genius.” 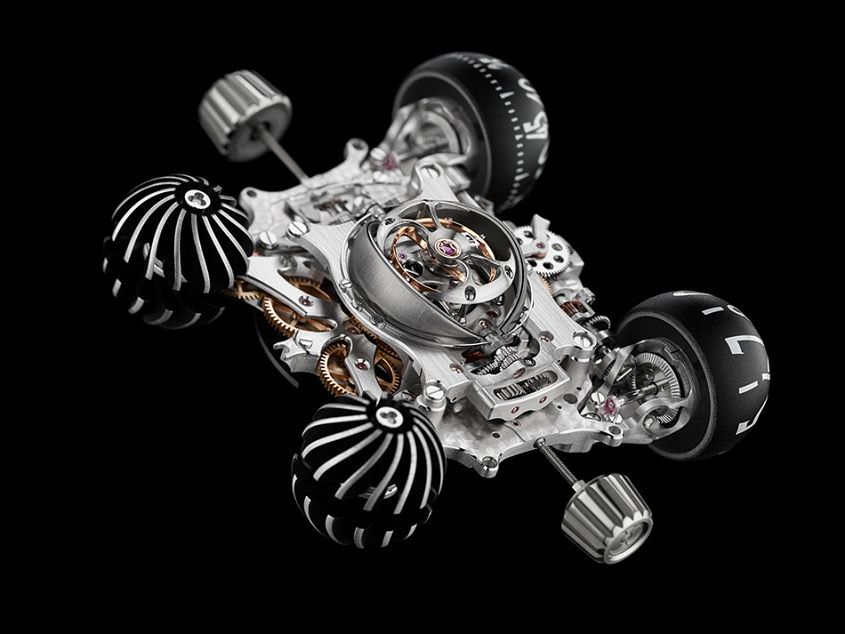 9. THEY SUPPORT NOSTALGIA. THEY RELISH IN IT.

“There’s a certain nostalgia, too, in having something on your wrist that goes back to basic technology – when you could actually understand how things worked. You can kind of intuitively understand how a mechanical watch works. You can’t do that with your phone. It’s mysterious. I have no idea what’s going on in my phone. It’s magic. Whereas with a watch, you wind it and you feel it winding. You turn the hands and you see them moving. It’s kind of reassuring and refreshing to have some parts of your life in the realm of what can be understood. It’s all very emotional in the end. When we see guys smile, like you just did, when you closed the shield, that’s priceless. That’s what it’s about. Some people may not get that right away when they see the price of one of our pieces. But it is deeper than that.”

It’s all very emotional in the end. When we see guys smile, like you just did, when you closed the shield, that’s priceless. That’s what it’s about. Some people may not get that right away when they see the price of one of our pieces. But it is deeper than that.

10. THEY THINK THEIR HIGH PRICES ARE “UNFORTUNATE”.

“Unfortunately, yes, there is a high price. But it’s not a conscious decision on our part. We don’t decide to make expensive watches. The price is a result of the whole process – including four years of development, and very limited quantities. Why limited quantities? Because that’s what allows us to take risks. If we were making hundreds of thousands of these we couldn’t afford to take risks. It’s not a marketing decision to say, ‘We have to be present in the 85-100K category’.” 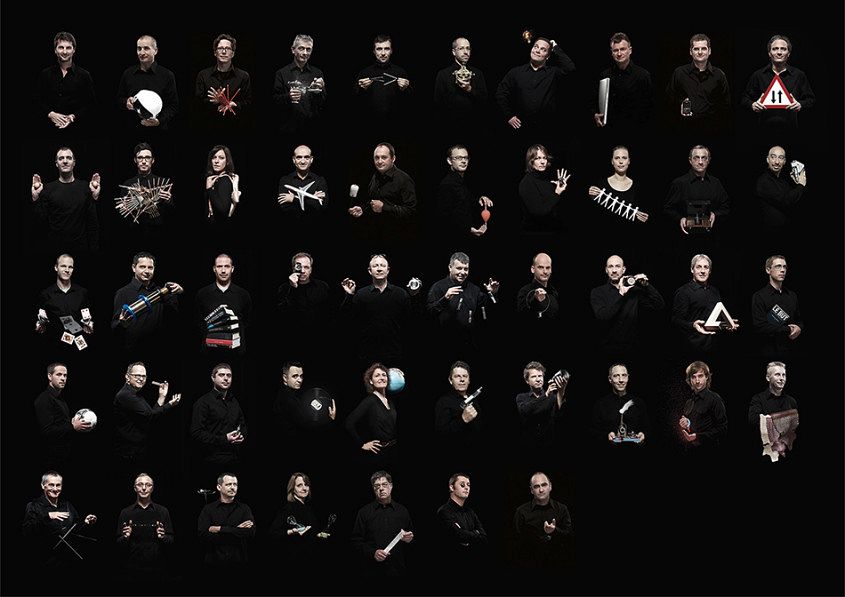 The friends who worked on the Space Pirate. Note, none of these individuals is an actual space pirate. Or are they?

The price is a result of the whole process – including four years of development, and very limited quantities. Why limited quantities? Because that’s what allows us to take risks. If we were making hundreds of thousands of these we couldn’t afford to take risks. It’s not a marketing decision to say, ‘We have to be present in the 85-100K category’.

11. THEY WORK IN A COMPLETELY OPPOSITE WAY TO THE REST OF THE WATCH INDUSTRY.

“The first thing we do is define the design. And that’s very different from most watch brands. Today the great majority of watch projects start with engineers. It’s a movement first and foremost. When this is optimised they bring in the designers. The designers put a nice case around it and then, last step, they bring in the marketing guys who invent some kind of story around it. That’s the way it usually works out. We do exactly the opposite. We start with a story. And that’s where Max’s most important contribution is.

He decides on what the story and what the concept is, based once again on emotions we had as a kid. Whether it’s a spaceship that’s inspired by a TV cartoon like the Space Pirate is (Capitaine Flam from the ’70s, by the way), that’s where we start. And then the designers come and materialise that concept with a rather final design. We then go to the engineers and the case makers and we say, ‘This is what we want’. And some suppliers say, ‘This can’t be done’. The team we’re left with, the ‘friends’ that make up the ‘f’ in MB&F, are the ones who’ve taken up the challenge, and succeeded.

Our thanks to The Hour Glass team and Charris Yadigaroglou of MB&F.