Editor’s note: If you missed instalments one and two of our glossary, you might want to quickly check them out, because now we’re in part three, we’re starting to get a little more technical. We’re moving beyond the basic parts and starting to explore how they operate together. Tick tock. 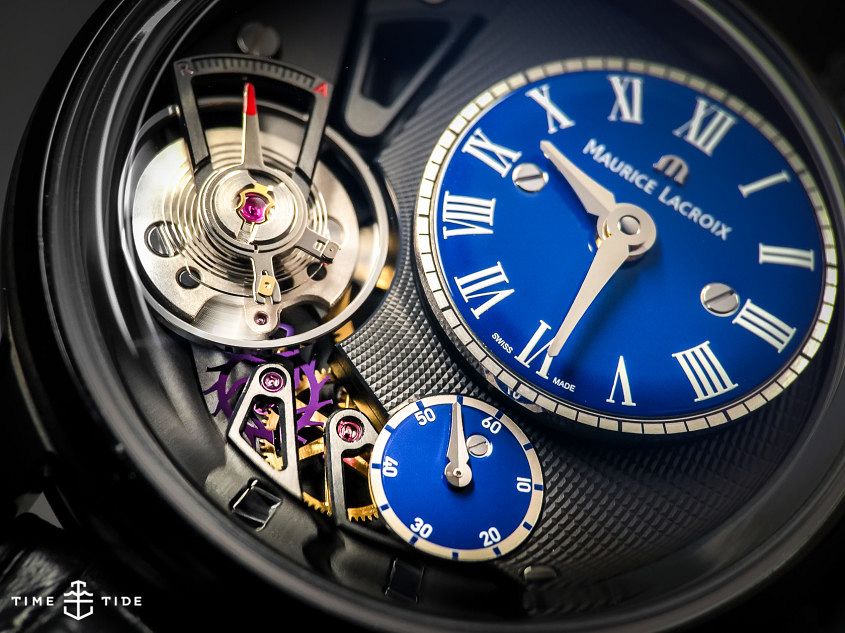 The escapement is a collection of components responsible for the time-keeping accuracy in a watch. These components work together to act as the timekeeping (or regulating) organ of the watch. Every watch needs an escapement to distribute the impulse from the power source (whatever it may be) to the hands (or time display) so that the time can be communicated to the wearer. There are several different types of escapement. Most of which are confined to history or concept watches. The most common type of escapement is called the ‘Swiss lever escapement’. The main components of this escapement are the escape wheel, the pallet, the balance wheel, and the hairspring. 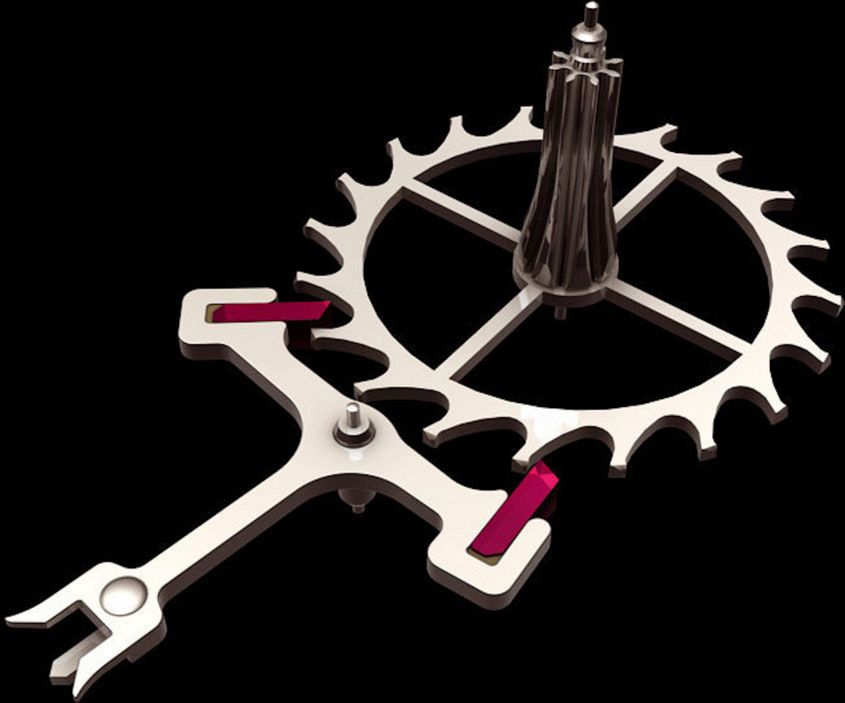 The pallet (or anchor as it is often referred to in Europe) is a T-shaped component that has a U-shaped notch on the tail of the T, and two faceted rubies (the entry and exit jewel/pallet) held in place by shellac on the arms of the T. 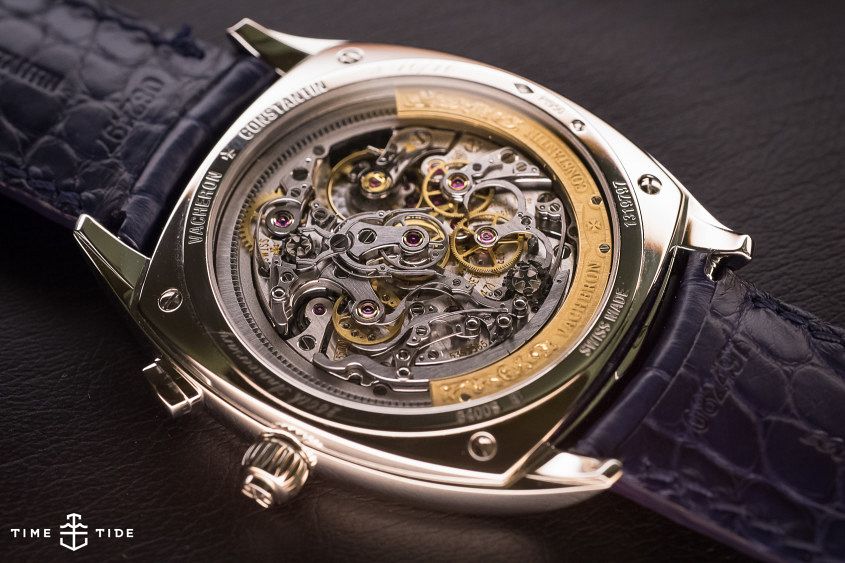 How quickly this stop/start system occurs inside your watch is down to the ‘operating speed’. The operating speed is measured in either vibrations per hour (vph) or hertz (Hz). Both relate to how many times (or how quickly) the balance wheel moves backwards and forwards. The hairspring (or balance spring) sits on top of the balance wheel and is responsible for causing the balance wheel to swing backwards and forwards as the spring ‘breathes’ (expands and contracts). Every time the balance wheel completes one full journey (swinging in one direction and then back on itself to the starting point) it is called an oscillation. A vibration is half of this journey (so either out or back, rather than out and back). So that means if a watch has an operating speed of 28,800 vibrations per hour, it is oscillating 14,400 times per hour. If you divide that by 60 minutes and then again by 60 seconds you are left with the number 4, which is the speed expressed in hertz (Hz). So a watch that has an operating speed of 28,800 vph is equivalent to 4Hz (or 8 ticks per second). The higher the operating speed, the smoother the sweep of the seconds hand appears to be as it is literally moving more times per second.

What difference does it make? A higher operating speed is often said to result in better accuracy. While this is practically true, it makes no difference theoretically speaking. Theoretically, if a watch with an 18,000 train count (operating speed) and a watch running at 36,000 vph are perfectly tuned with the balance wheel, and hairspring perfectly poised, and both are kept in a static environment (crucial) then there should be no difference in their accuracy.

However, such an eventuality is unrealistic as a watch will be worn, and during the act of being worn it will endure shocks. The advantage of a higher frequency escapement in this example is that the amount of power coursing through the escapement in order to drive it so quickly means the escapement is better able to ride out the potential disruption of a shock.

If you imagine a rugby player receiving the ball and walking slowly towards the defence, he will find himself flat on his back (in quite some distress) when they make contact. It will take him a while to regain his feet and composure and return to his normal duties. If, however, the player receives the ball while moving at high speed and hits the oncoming defensive wall (the shock) with power, he will be more likely to beat the impact and continue running free. This sporting analogy explains what is happening to a slow-moving versus a fast-moving escapement when they experience a shock. 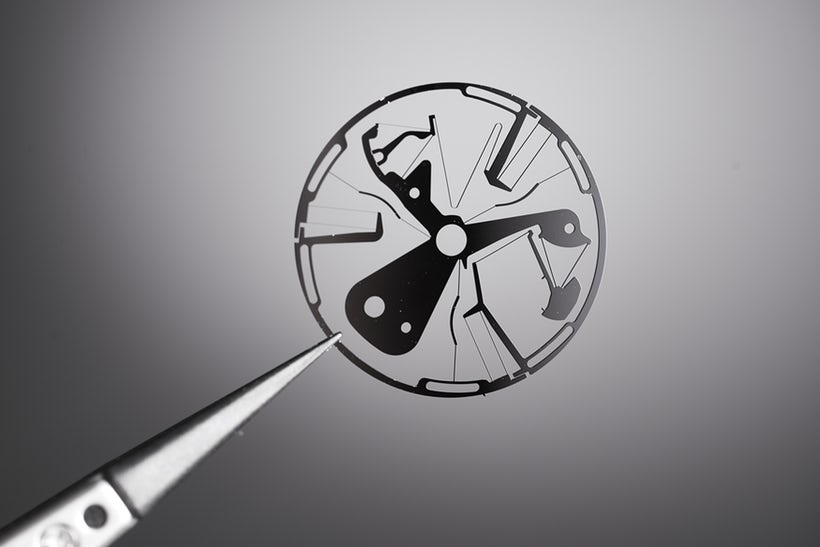 The downside to a higher operating speed is the massive power consumption. For sports watches (which are the most likely to sustain shocks as it is), this is a minor problem, because they are almost always fitted with automatic movements, which are able to replenish the consumed power immediately due to the movement of the wearer’s wrist constantly rewinding the mainspring. So even though the resulting power reserve may only be in the region of 38 hours, it matters not in practical terms, because the power generated by the oscillating weight’s constant travel will be enough to keep the watch running accurately.

On the flip-side, you will also see slim line, manually-wound dress watches dropping their operating speeds to increase the power reserve of their movements, which would be inherently low due to the thinness of the mainspring, and thus its inability to generate a huge amount of torque.

Very modern concept watches (like the Zenith Defy Lab from 2017), which use silicon oscillators instead, do not suffer from the same massive power consumption issues as traditional high-frequency movements due to massive reduction in balance wheel amplitude and an entire reworking of the watch’s operation.