Vintage field watches can be a minefield, full of mechanical issues, aftermarket parts, or just a victim of horrendous overvaluing on the likes of eBay. All of this seems to go against their original ethos, which was to be legible, reliable and able to take a beating in the outside world. Of course, as watches have become less and less practical, the aesthetics of these watches have become priorities, especially when it comes to homages or reissues. Mitch Mason’s inaugural Kickstarter for their Chronicle promises to change that, returning to a formula that aligns itself with those original tough-as-nails timepieces, all the while offering familiar yet fresh designs. 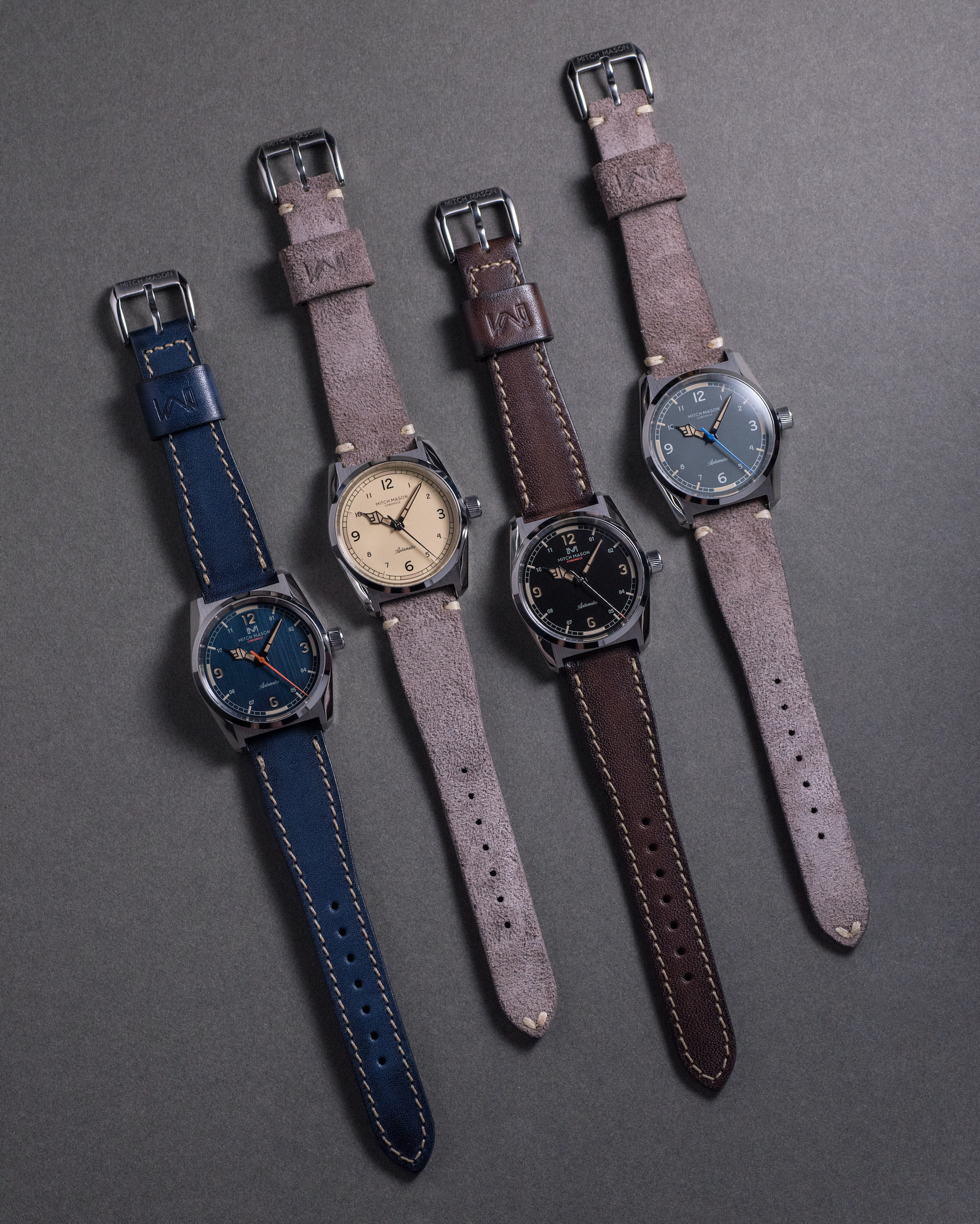 There are four variations of the Chronicle, each giving their own unique character to the watch, as they’re not just a simple colour change. Two of the models have a sandwich dial construction, with a layer of sunken luminous paint beneath the dial, adding a depth to the quarterly numerals. 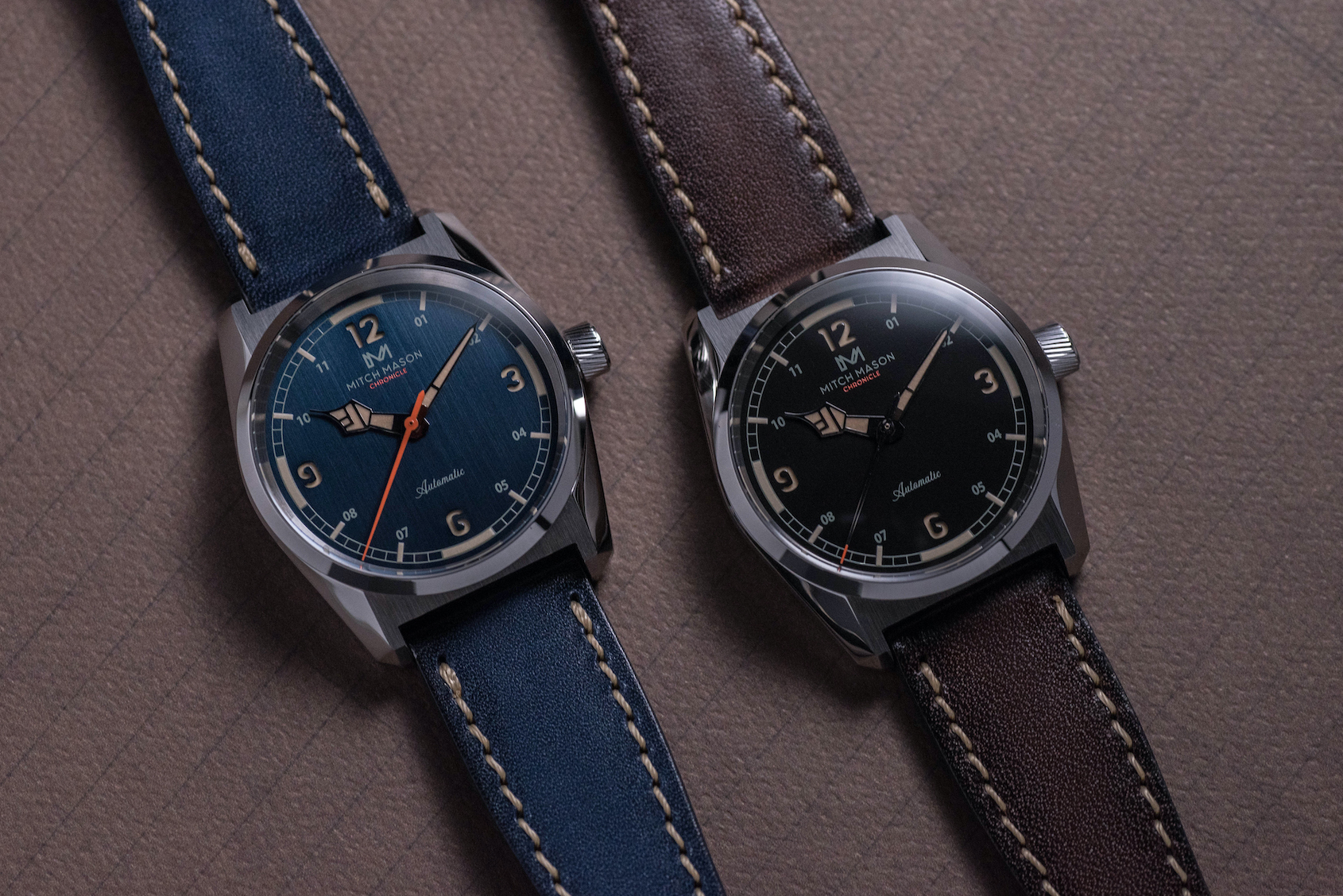 Of these, the Steel Blue is the most visually stimulating. A denim-blue dial with vertical brushing allows the bright orange seconds hand to pop, almost evoking a ’70s racing chronograph. The Jet Black version is the most classically handsome model. With the high contrast between the dial and the steel handset, white printing and creamy lume, legibility is at its highest point. The supplied brown leather strap completes the look, while the darkened stitching matches the lume, giving the watch a firmly vintage-inspired flavour. Both of these models also differ in that they’ve got a simplified typeface for their smaller numerals, ensuring each single digit has a zero placed to its left for the sake of symmetry. 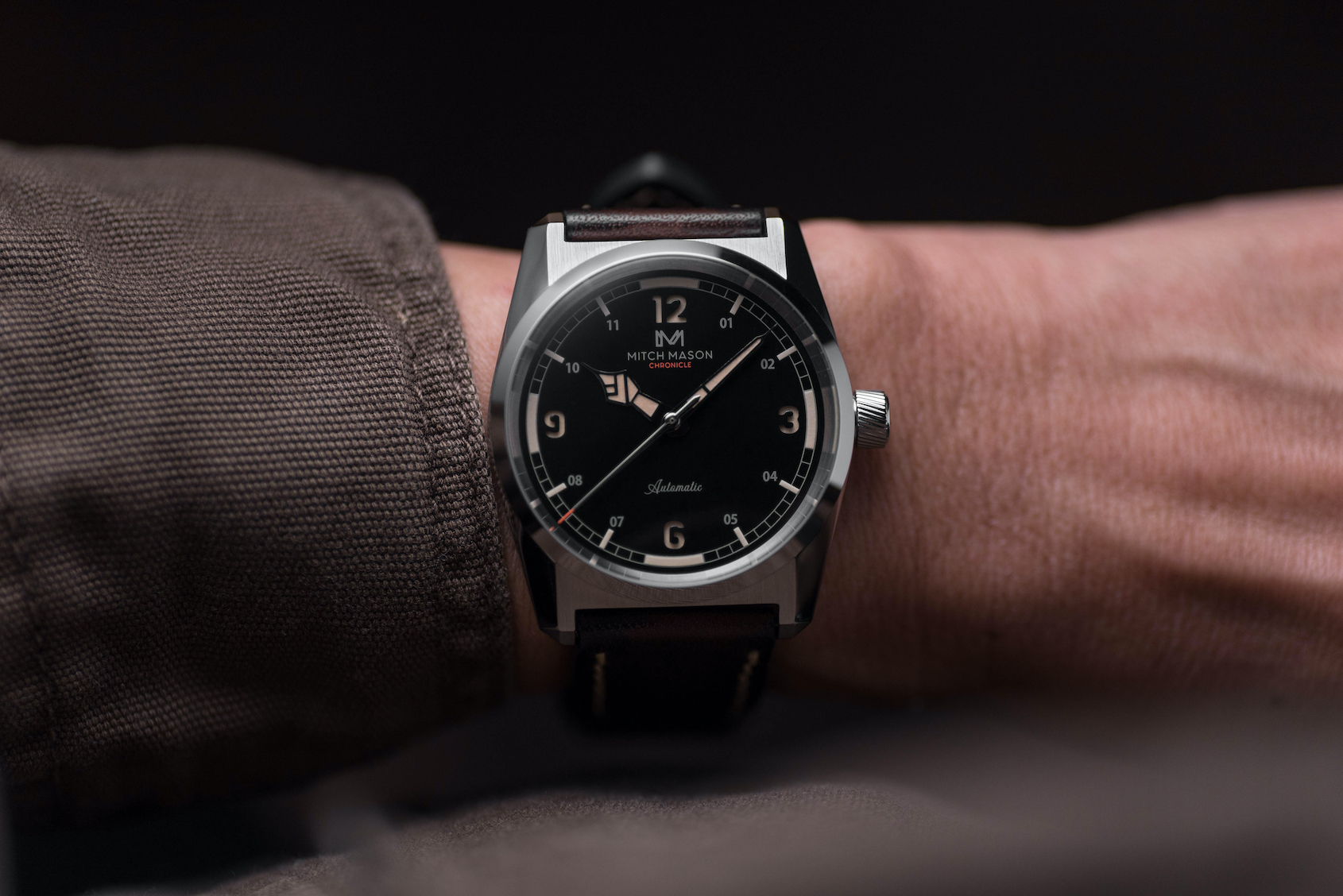 Sitting closer to the 1940s end of the spectrum are two printed dials with a rough-textured brown suede strap: Desert Sand and Field Grey. These dials sit a lot closer to the archetypal field watches of the 1940s, with their slightly more stylised numerals (we’re looking at you, open ‘4’) leaving a lot more space on the dial. The cream dial is especially clean, as the luminous markers blend right in, only appearing when you need them in the dark. The matte grey dial is offset nicely by a light blue seconds hand, adding a little dash of colour aside from the beige. 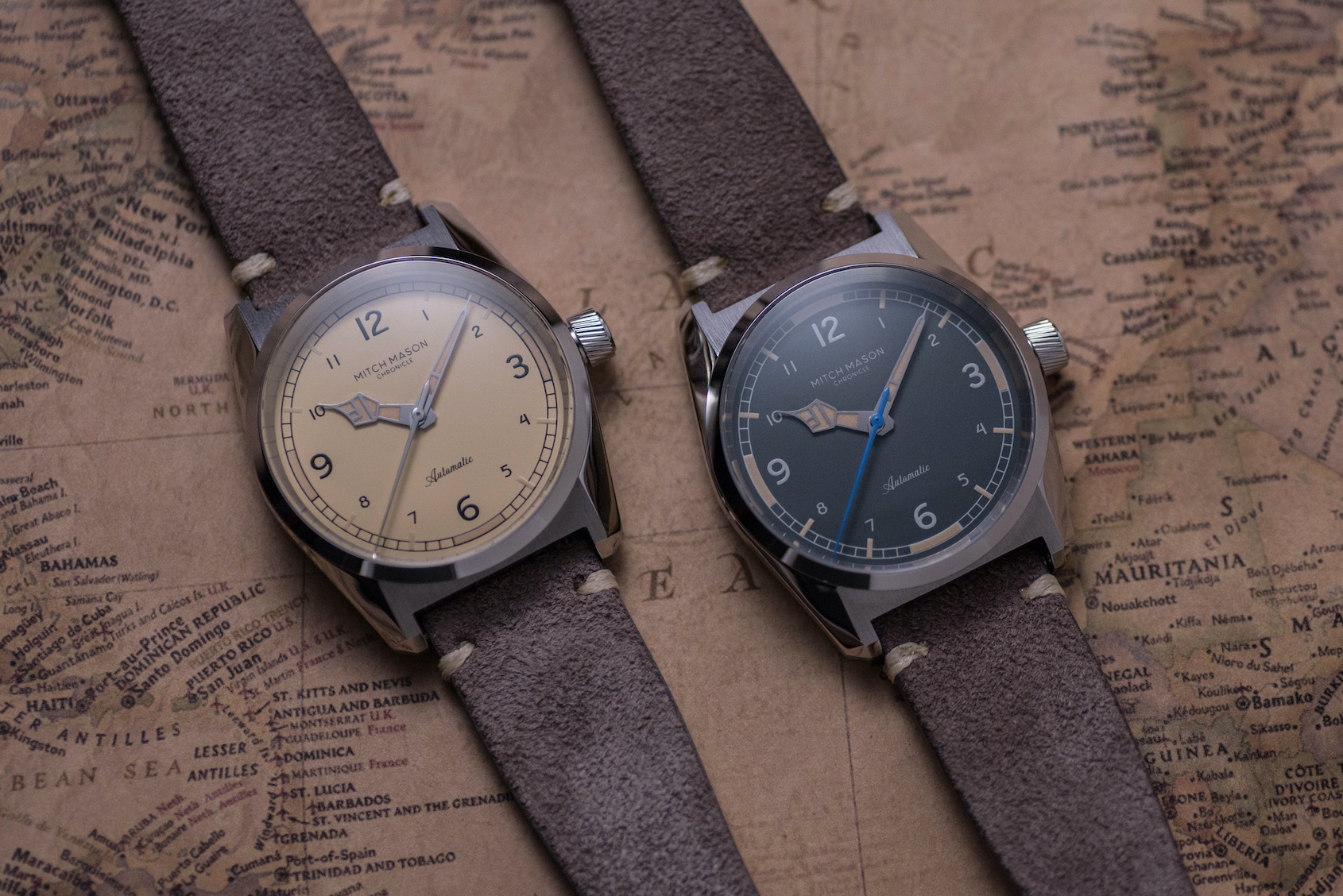 What really sets Mitch Mason apart from other brands making affordable vintage-inspired watches is their attention to detail, specifically in terms of the case architecture and hand design. The hands are reminiscent of a classic cathedral style one might find on a ’40s military watch, but instead of intricate curves, we are treated to a series of straight lines in the steel, cleverly mirroring part of the Mitch Mason double ‘M’ logo. 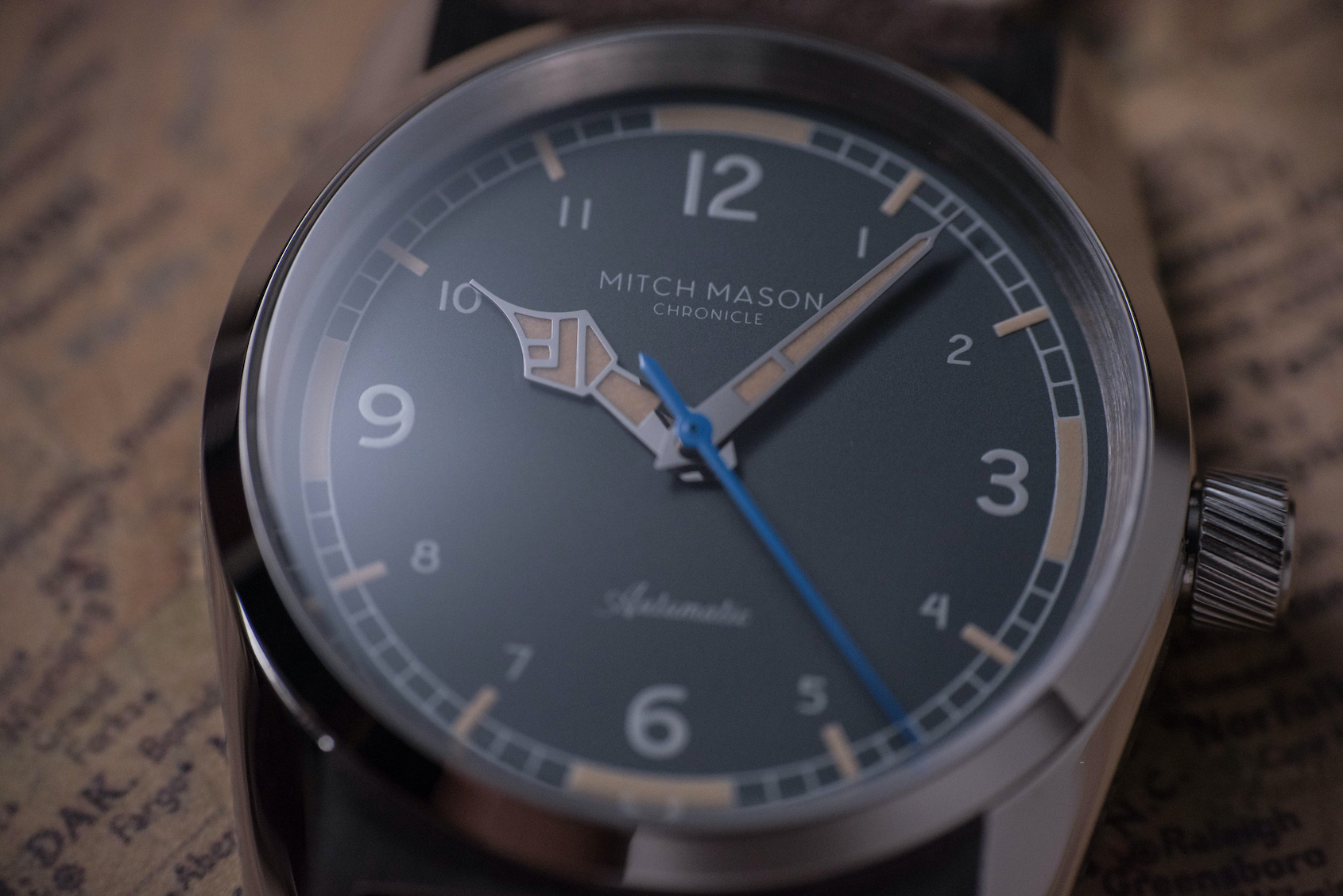 The case design is nothing short of breathtaking, as its blocky slopes and unabashed character are so often unseen anywhere outside the likes of Grand Seiko’s famed 44GS. The Chronicle definitely carries its own character, though, with satisfying distinction between large-grain vertical brushing and polished sections, designed to reward you for proudly displaying scratches. The oversized, unguarded and signed crown also adds to that package, as well as providing easy grip for screwing and unscrewing. 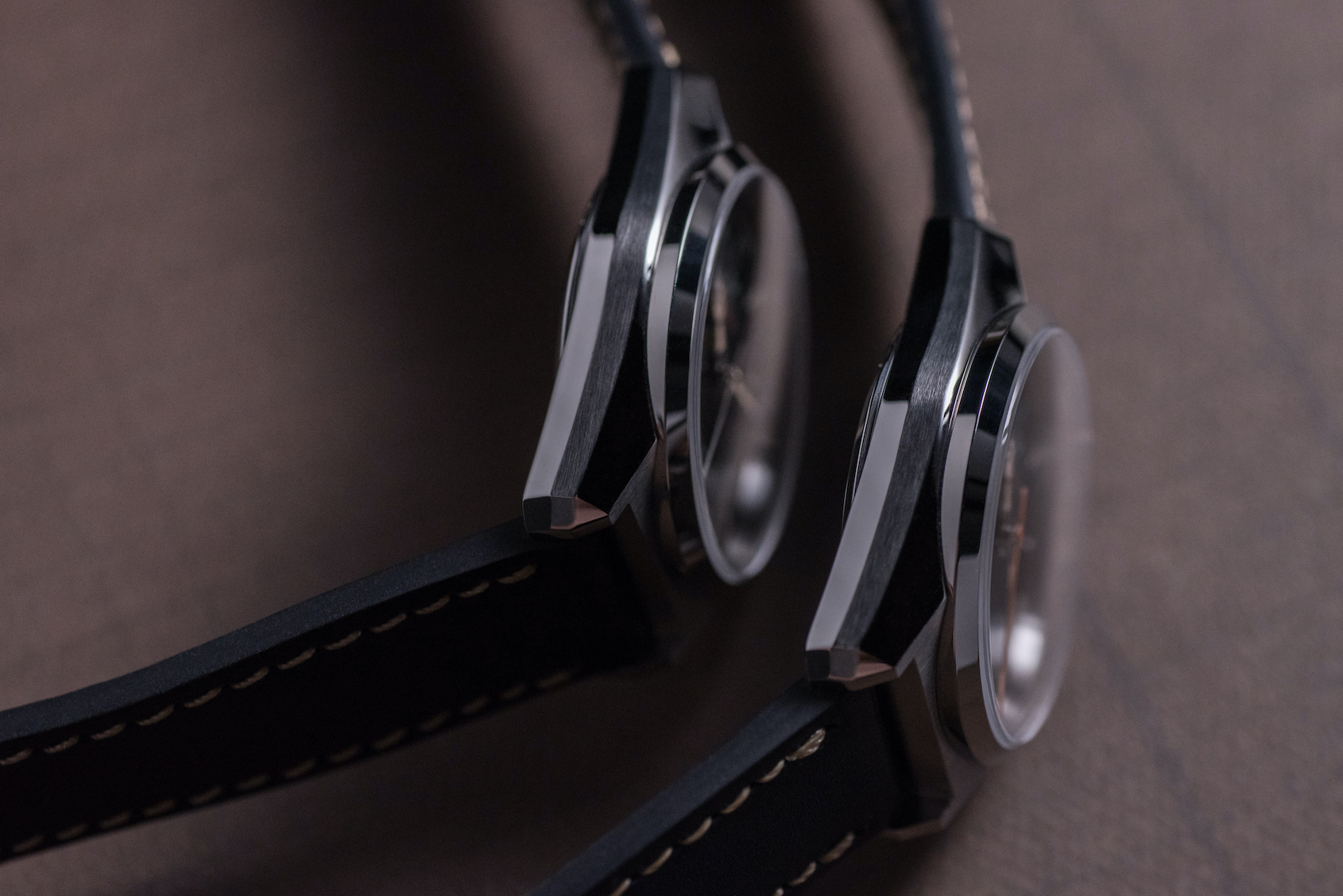 Browsing the spec-sheet of the Mitch Mason Chronicle proves that they are well and truly listening to what the watch community looks for in a timepiece. A diameter of 36.5mm and a lug-to-lug of 43.5mm will have those with smaller wrists rejoicing, as well as anyone who appreciates the way vintage watches wear. The 20mm lug width may seem wide for those dimensions, but the way the lugs integrate to the case means that the strap works as an extension of its design, and of course makes it a ripe choice for swapping your own straps or bracelets in. 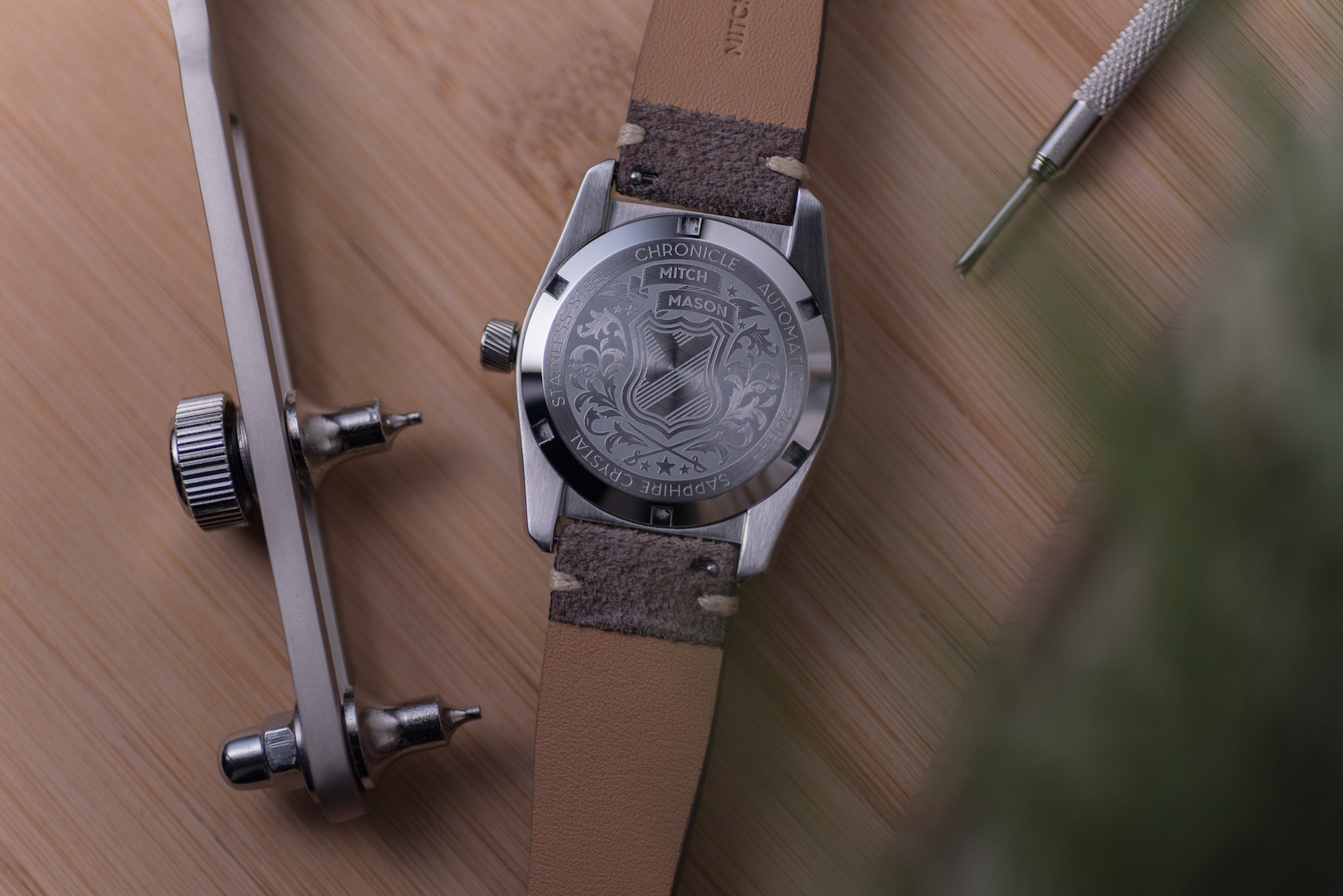 The 200m of water resistance may be a slight overkill for what isn’t traditionally a watch for diving, but it’s a welcome idea that you can throw on a mesh bracelet and hit the beach, furthering the idea that this can act as a ‘beater’ watch. The Miyota 9039 automatic and no-date movement powers these watches, offering a traditional 28,800 vph sweep and 42 hours of power reserve, while saving some costs and being reliably accurate and cheap to service. 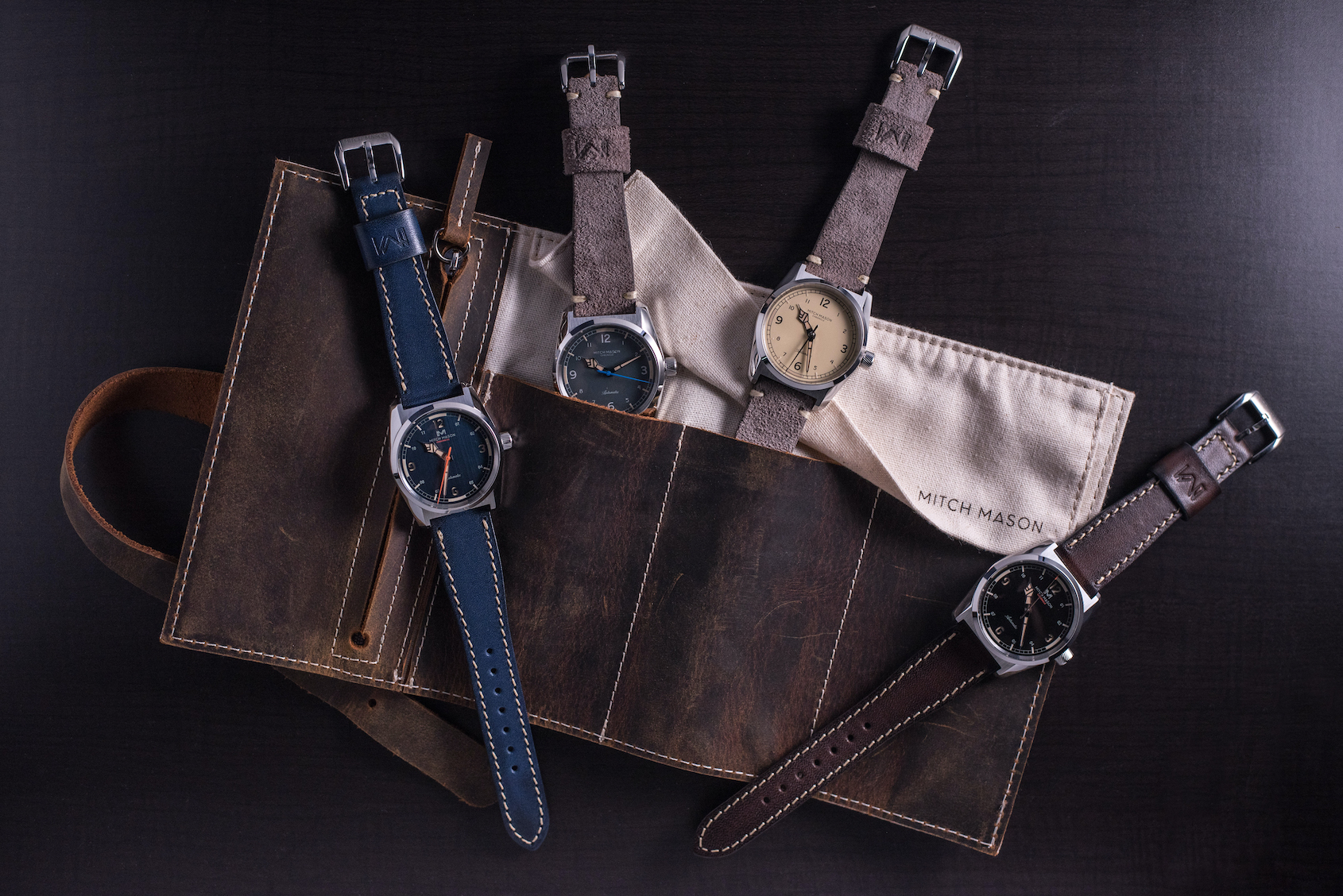 All things considered, the Mitch Mason Chronicle is a well-executed expression of a vintage-inspired watch that draws inspiration from a range of sources. With the classically European Cathedral-style hands and the likeness of the case design to the Japanese Seiko 44GS case, it is truly a watch that borrows from the global horological canon. Despite the geographically varied design cues that could easily make a young watch brand produce a confusing and chaotic final product, the Chronicle is pleasingly coherent in the way the different design elements have been pulled together. For the impressive feat of successfully combining these cosmopolitan cues, the Mitch Mason Chronicle is worthy of serious consideration if you’re in the market for a thoughtful and affordable wristwatch.

For more details, visit the Kickstarter campaign that is launching on September 1 right here.