When we see something repeatedly, over time, our brains quickly form habits that enable us to infer what we are seeing, bypassing the need to analyse every bit of information. That’s why we can make perfect sense of a paragraph made up of words that are missing their vowels, and why we can read the time on an analogue watch display that has no hour or minute markers. 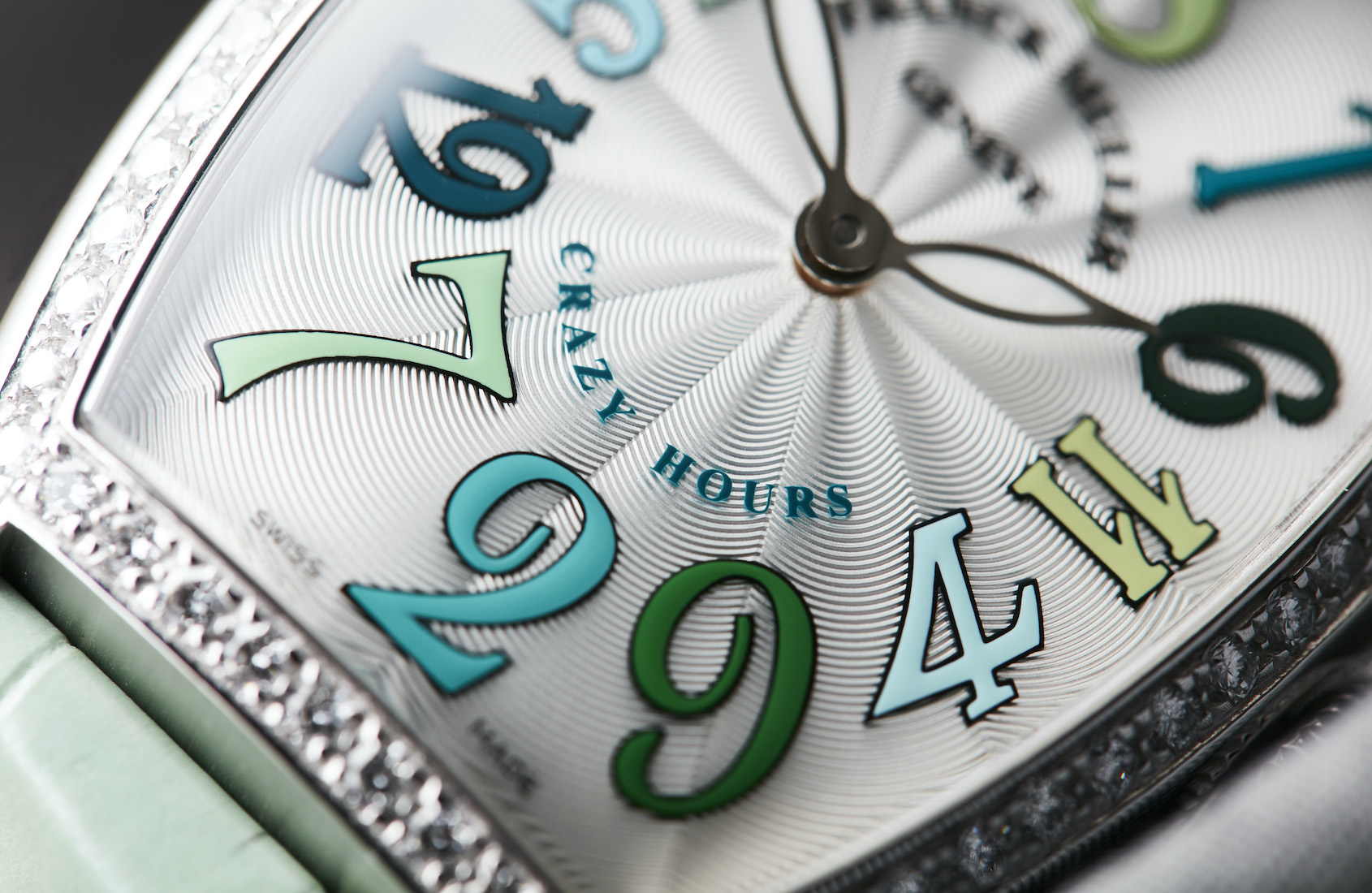 It’s also what makes Franck Muller’s Crazy Hours watch one of the most delightful pieces in contemporary watchmaking. In the first instant the dial appears perfectly normal, with a series of numerals arranged around its circumference. Half a second later, we realise that it’s anything but normal: the usual position of the numerals is completely jumbled. It’s a visual teaser – sense and nonsense – and a brain teaser, playing with how we habitually read time in a natural, clockwise sequence. 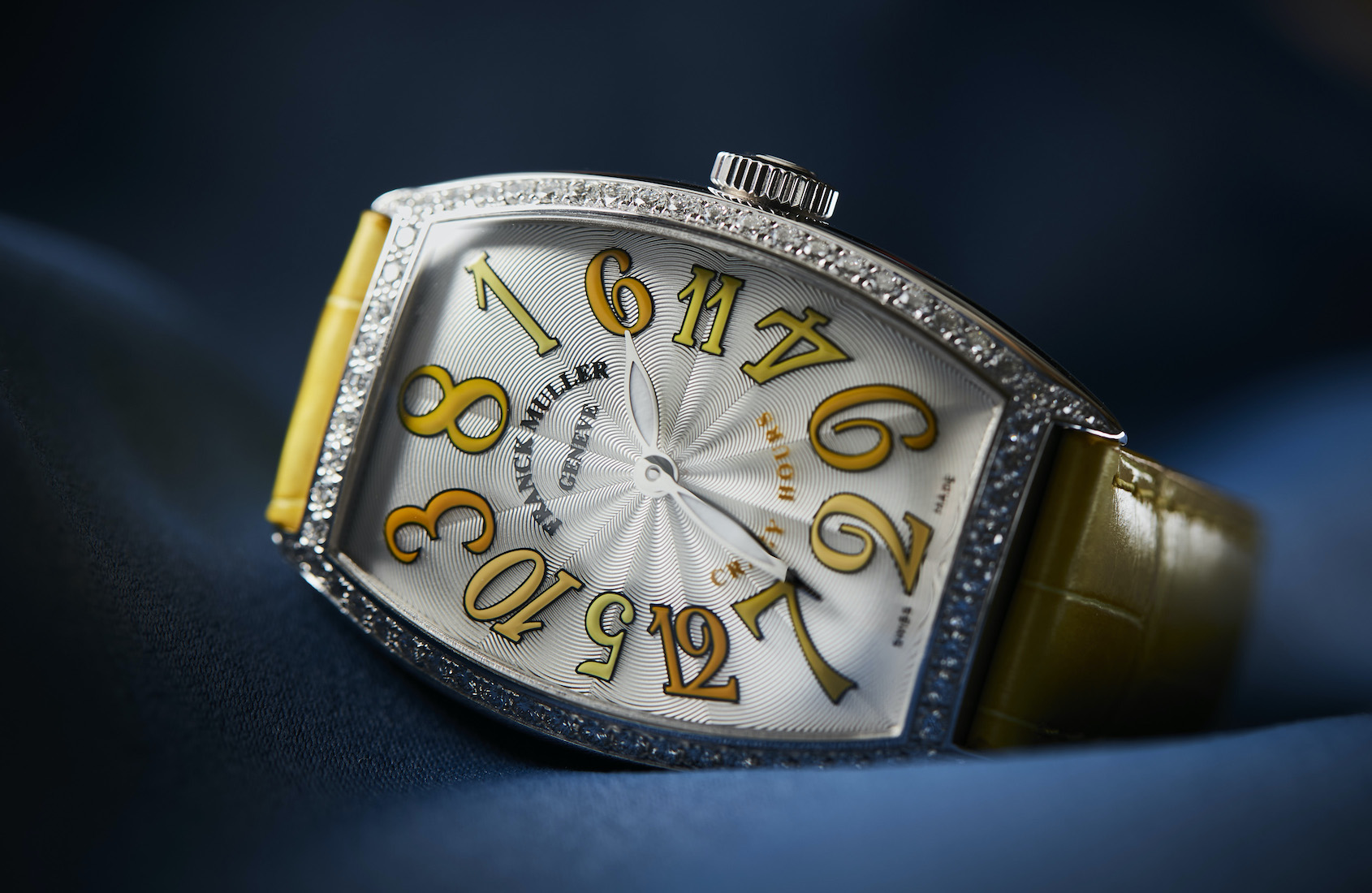 Since Franck Muller invented the Crazy Hours complication in 2003 it has (unsurprisingly) become an emblem of the brand that bears his name – just as emblematic as the Cintrée Curvex case that houses these colourful limited-edition models. There can be few objects of any kind that combine grown-up glamour and childlike whimsy so well. If you’re dreading the end of summer, the choice of tropical-lagoon blues and greens or daffodil-and-sunflower yellows will hold onto that sunshine feeling all year round. 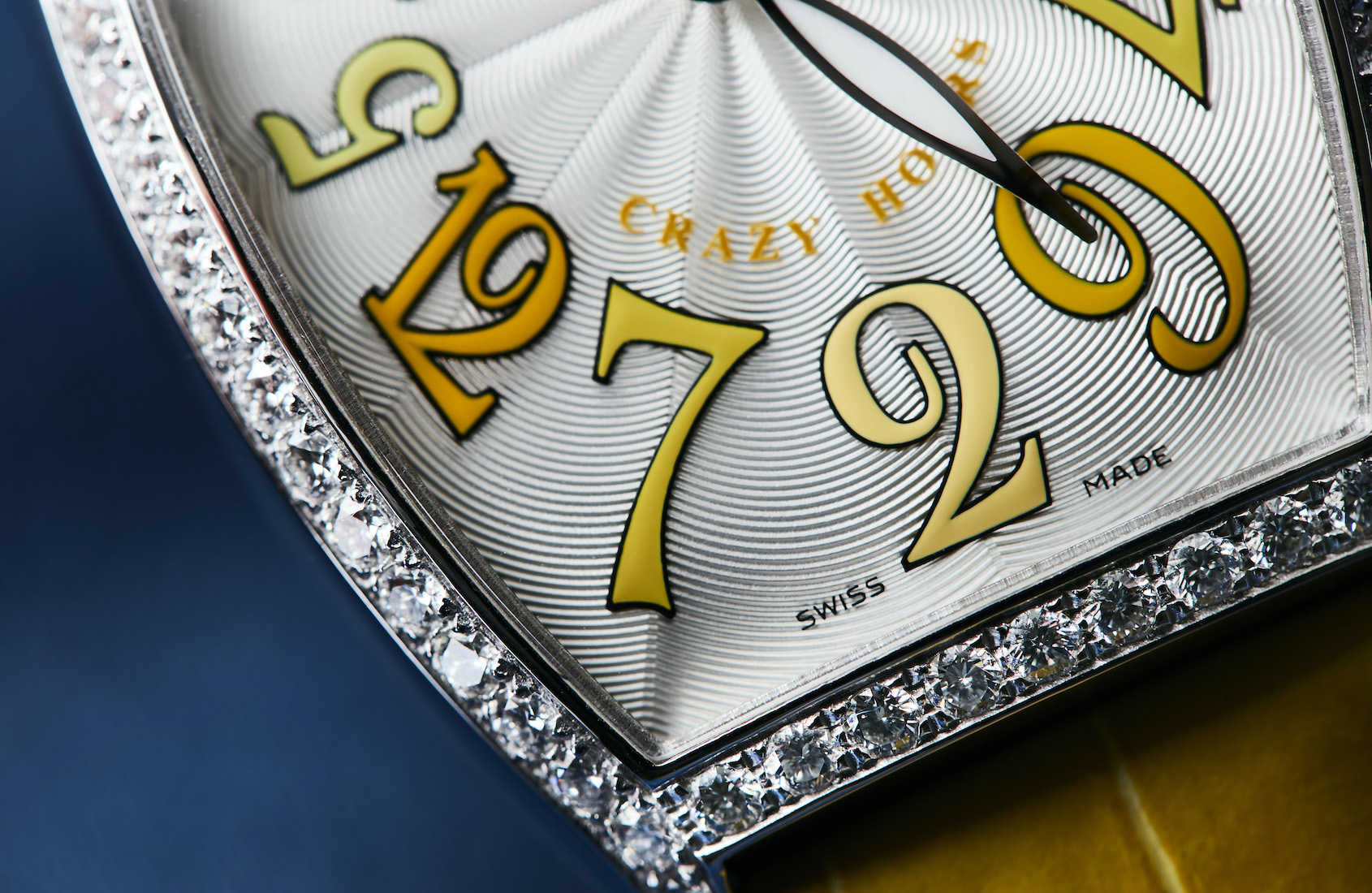 Even before you get to the really fascinating, time-telling part, the dial is quite a feast for the eyes. The oversized Arabic numerals (a lively mix of XL and XXL) are hand-painted – the paint so richly layered that they look almost three-dimensional against the glowing silvery background. The wavy sunray pattern is stamped then coated with several layers of translucent varnish, creating an effect very similar to guillochage, playing with the light as you turn your wrist. 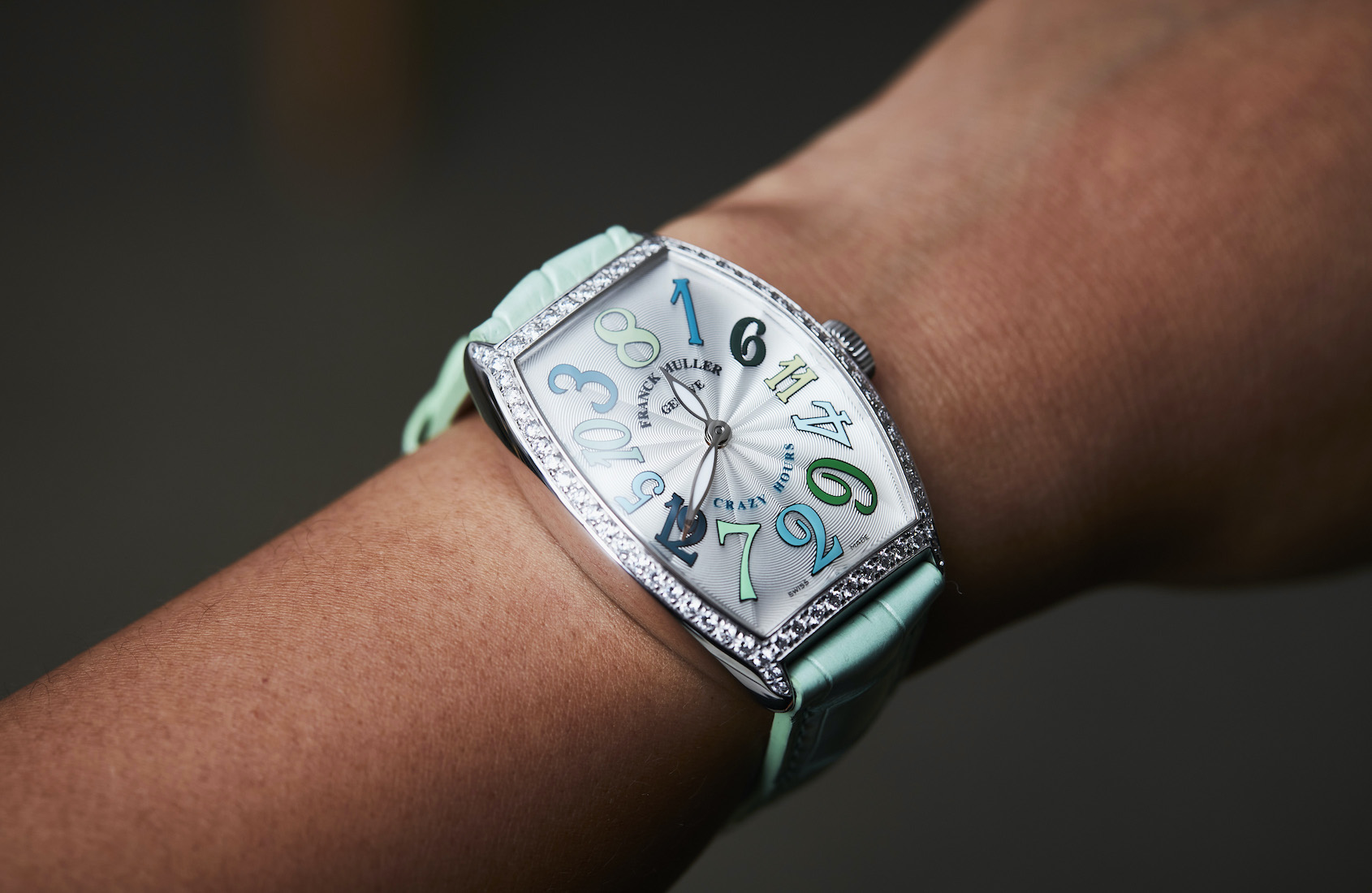 Then comes the time-telling: as the hour changes, the hand jumps instantaneously to the correct numeral, while the minute hand follows its normal circuit. (This is where the “inferred” reading that I mentioned in the beginning comes into play: you read/infer the minutes from the habitual position of the hand, not from the number it is pointing to.) 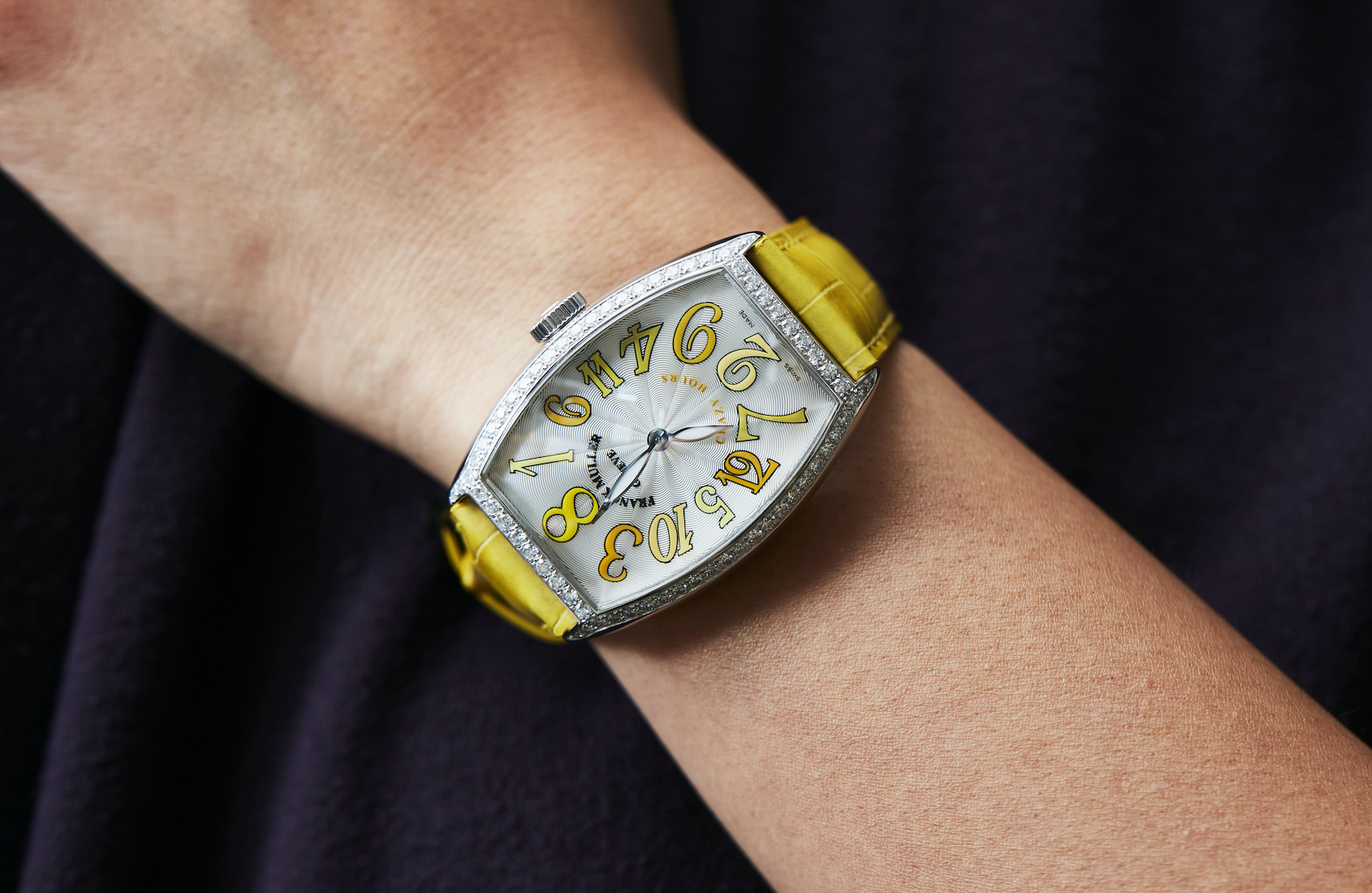 The way it works is both ingenious and simple: it’s nothing more than a classical jumping hours complication – but with a clever twist. Look closely and you realise that four of the numerals are in their “normal” positions: 1, 4, 7, and 10. The “jump” complication is set to leap five places on every hour, thus ending up on the correct hour. Watching it happen is great entertainment. Watching the reaction of someone who doesn’t know the watch is even better entertainment: they will think it is showing the wrong time (at 5 o’clock, the hour hand is at the traditional 9 position, rather than where it “should” be – until the hour changes, the hand jumps and they will assume that the watch has gone completely nuts).

There’s another trick up its sleeve – and this one teases the owner, even when you’ve become accustomed to the unusual hour positions. The leaf-shaped hands are filled with luminous material that glows in the dark so you can (in theory) tell the time in the middle of the night. Except that you can’t really. You will know that it is, say, 20 past (the minute hand being in the normal “20 past” position) but 20 past 11pm? 20 past 3am? Unless you have perfectly memorised the position of every hour numeral, you cannot know. 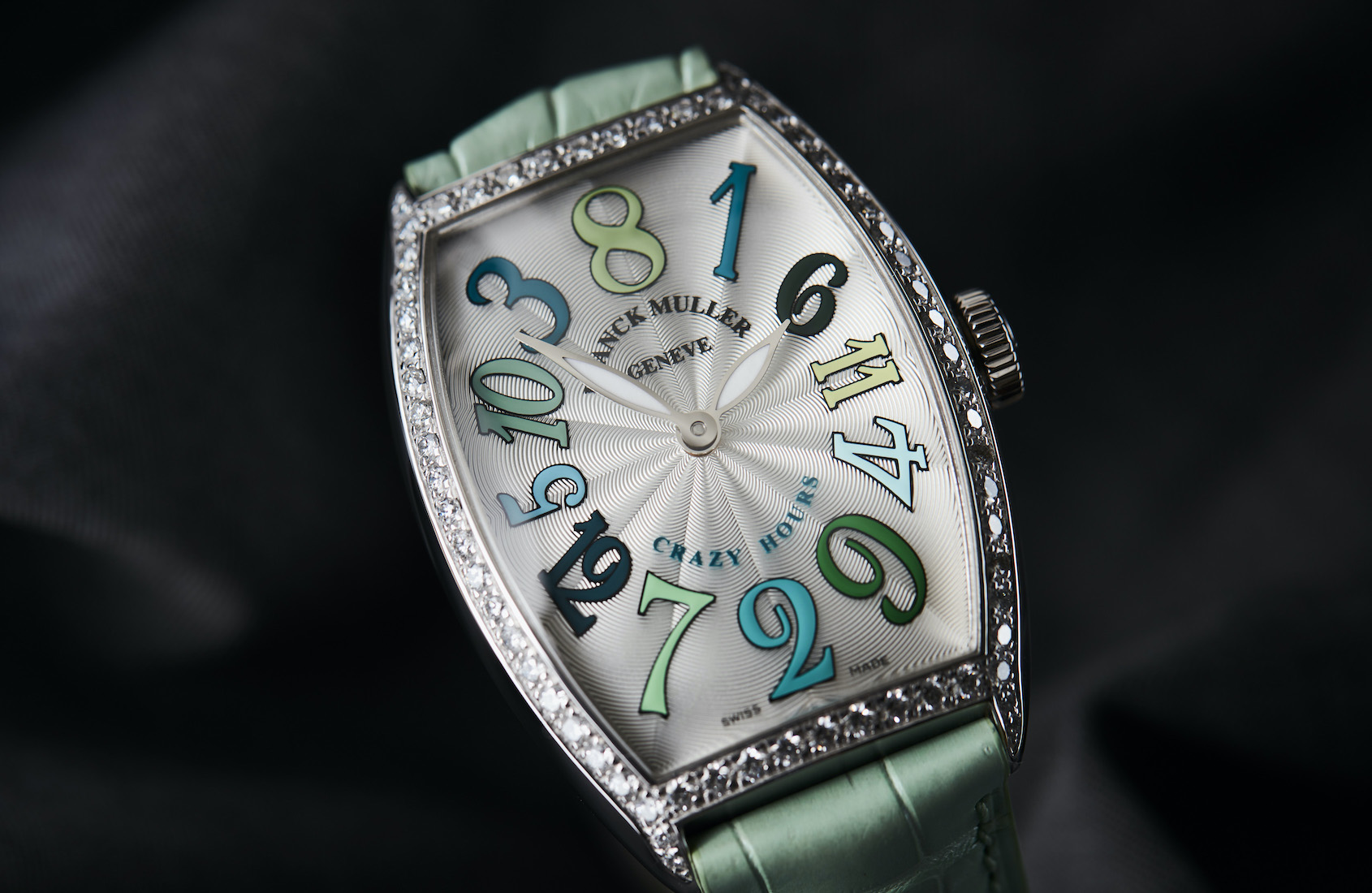 The Curvex Cintrée case – an elongated tonneau shape with a curved caseback that hugs the shape of the wrist – is one of the most elegant and comfortable around. It’s all about curves: the convex sapphire crystal echoes the shape of the caseback and the case sides are slightly convex too – the high polish of the steel adding to the visual effect. Although the case measures a relatively modest 35mm x 25mm, it has far greater presence on the wrist than any conventional 35mm round case I’ve come across. 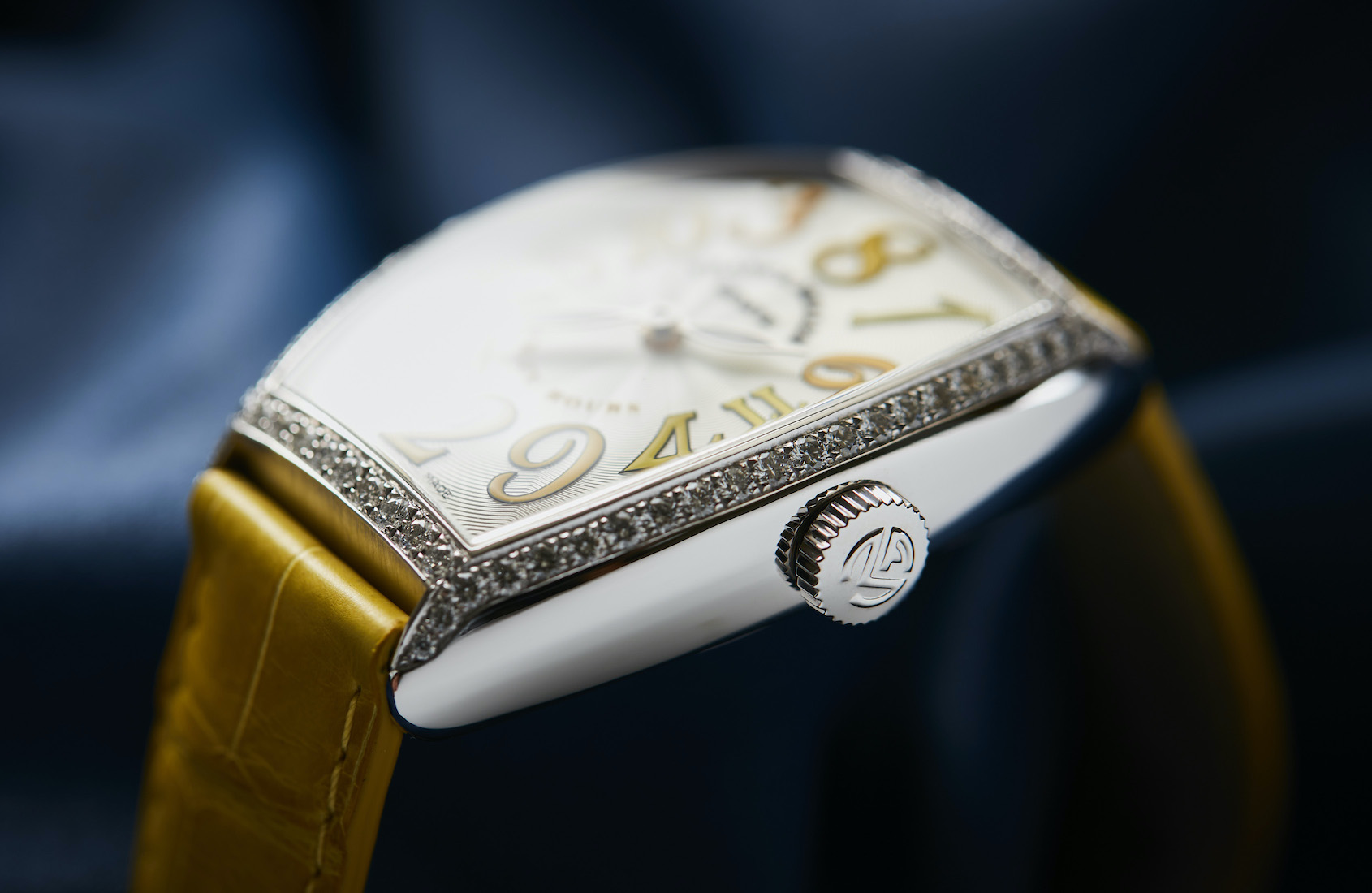 The real appeal of this watch lies in its contradictions: childlike playfulness in a very glamorous package; the elegance and aesthetic details of classical watchmaking rendered in a very contemporary style; and an utterly unconventional approach to time-telling (via a very cool complication that ticks the watch-nerd box) that messes with our minds in the nicest way possible.