Why getting your Jaeger-LeCoultre Reverso engraved is worth the wait

The Jaeger-LeCoultre Reverso is a paragon of the Art Deco dress watch style, delivering a clean and classic design that has remained the same for the best part of a hundred years. While most watches with a solid caseback offer ample space for an engraving, the Reverso offers more than most thanks to its beautifully designed ability to flip the watch dial over to face the wrist, exposing the caseback to the elements. 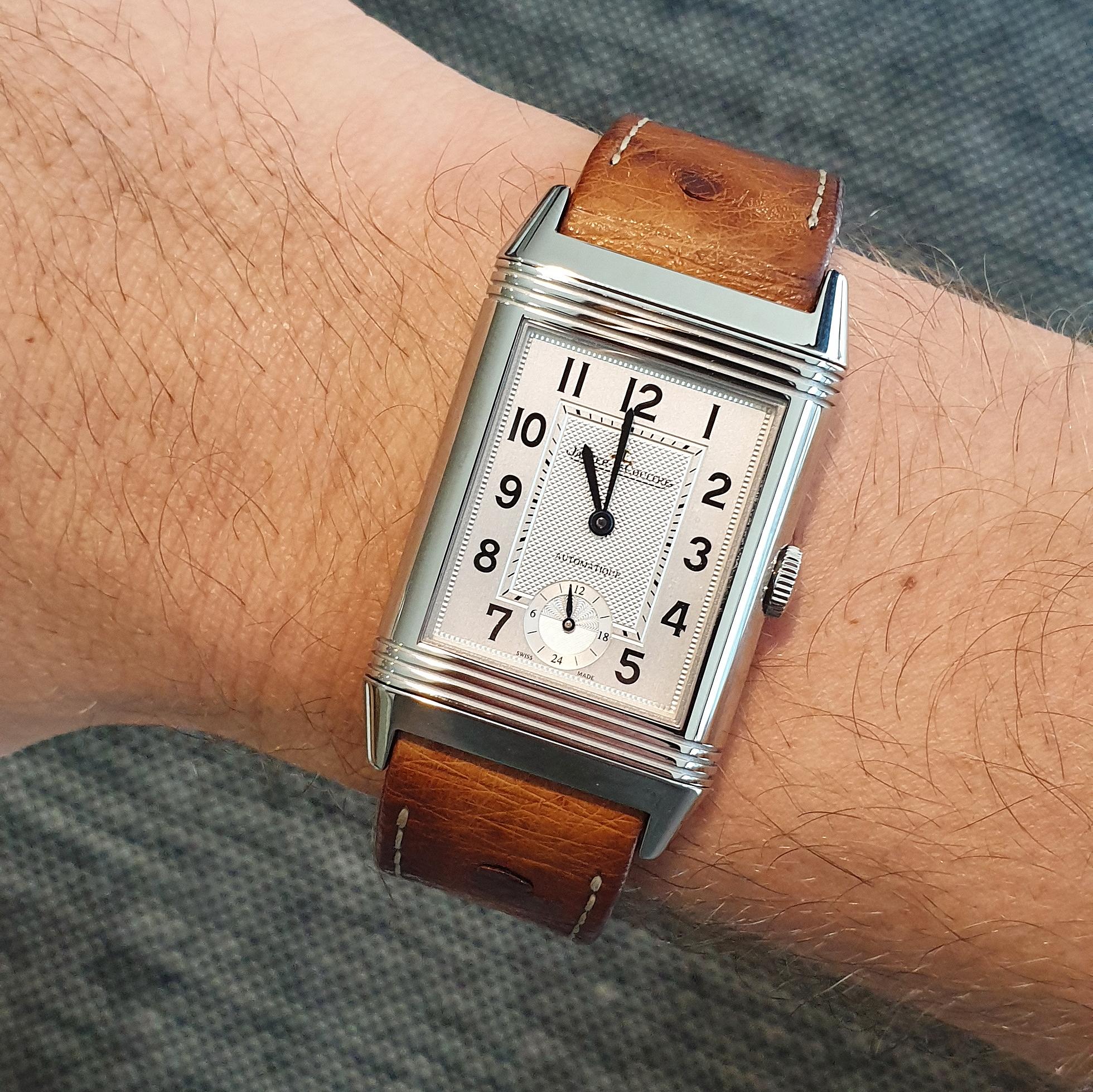 As most will know, this ingenious technique for hiding the dial from the rest of the world was born on the polo fields of India, where players required a watch that could have its glass protected against errant mallets and balls. In this regard, there is an argument to be made that the Reverso was the first ever sports watch, but today it is firmly found on the dressier side of things, pairing nicely with a daily suit and tie. What has remained unchanged, however, is the both valuable and visible real estate of the caseback, offering a blank canvas for a masterpiece of engraving. The only thing left is the owner to decide what they want depicted. 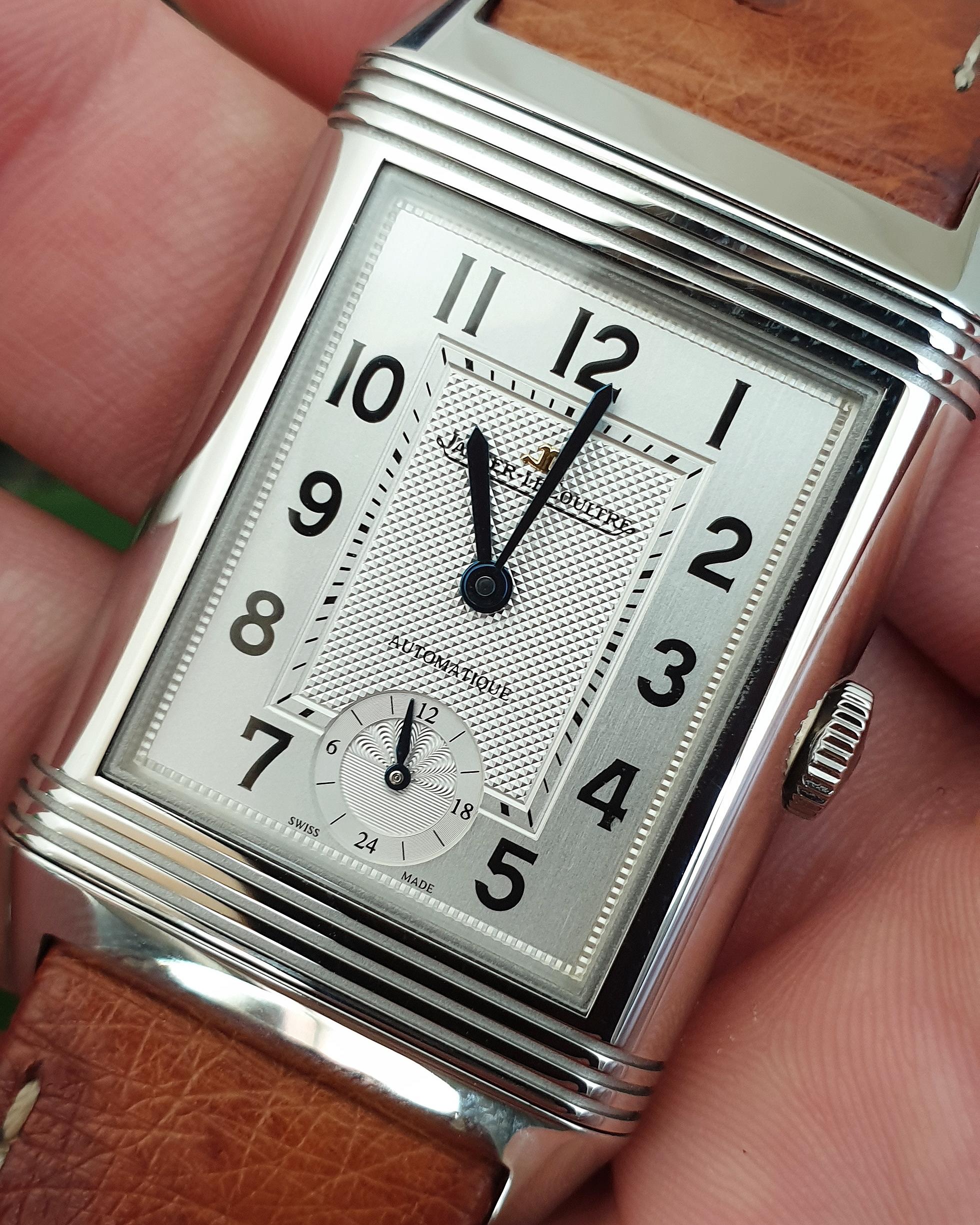 Hugh, a friend of Time+Tide, was in just such a predicament when he decided to get his Reverso engraved after owning it for a couple of years. He had fallen in love with the Reverso when he first saw it on the cover of a magazine when he was 19, and as soon as he was able to buy one he did. “I was always interested in the Reverso,” Hugh explained. “I was just fascinated by the mechanics of how it worked. Then, as time went on, I got more into the heritage of the Reverso and of JLC.” 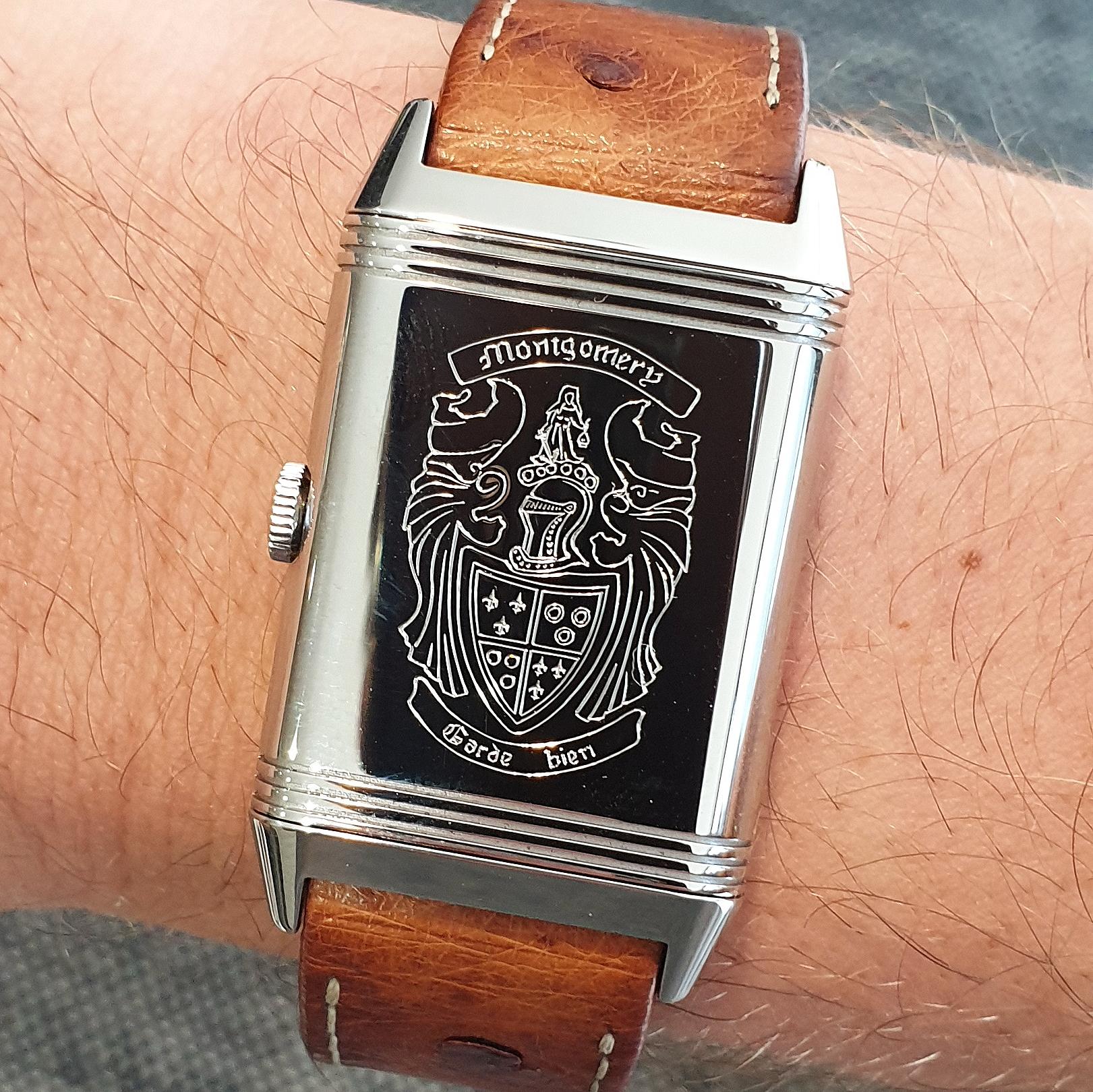 Hugh works in media, and admits that a Reverso is a strange choice compared to what many of his colleagues wear as their daily watch. “I was probably influenced a bit by other people that I work around. You see a lot of Speedmasters and Submariners, but I guess I was after something more distinct, and something you wouldn’t see that often.

“I remember trying it on for the first time, and I thought, ‘I wonder if it will feel too formal?’ But it’s easy to change the strap at home and dress it up or down, so it’s perfect. I love the black croc strap that it came on. But I knew I had to have brown because I wear brown shoes all the time, and the ostrich JLC do is beautiful.” 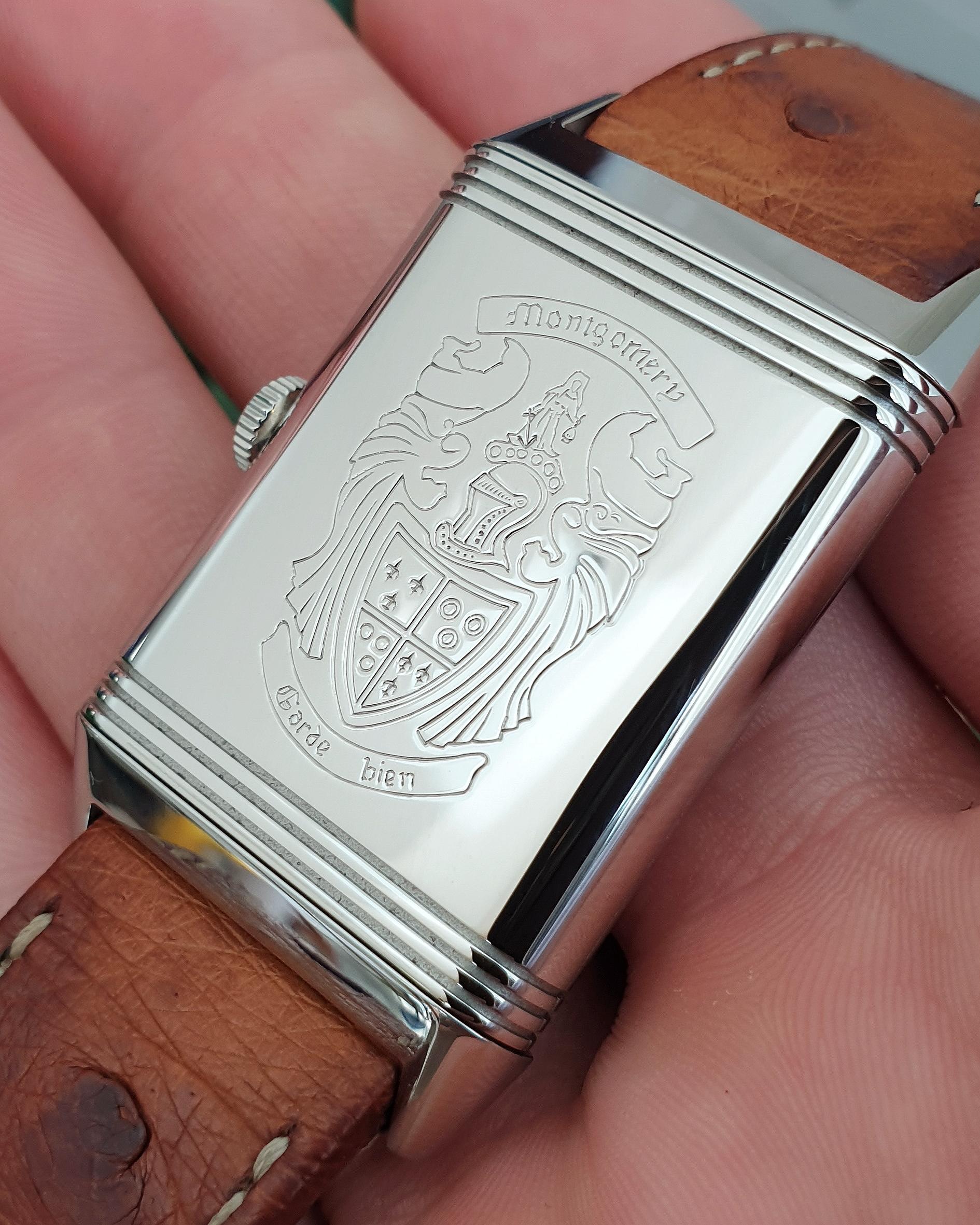 “I had it for a couple of years and I knew I wanted to get it engraved; I just didn’t know what at the time. I had a conversation with my brother that Christmas and he asked what I was going to get engraved on it, and I told him I was still working it out. He said, ‘The family crest would be pretty cool.’”

Once Hugh’s father did some digging to find the correct family crest, he got in contact with Monards, the Melbourne-based boutique he bought it from, and began the process of working with the Jaeger-LeCoultre engraving team to come up with a design.

“The enamel within the engraving was cool, but I opted against the colour because I thought it might annoy me over time, or it might not go with something I’m wearing,” Hugh said. Once the decision was made to keep the engraving more classically restrained, the long wait began. He admitted the boutique staff were very clear about the length of time the engraving process took — explaining the watch would be sent to Switzerland to be engraved at the Jaeger-LeCoultre factory — but being without his beloved Reverso wasn’t easy. 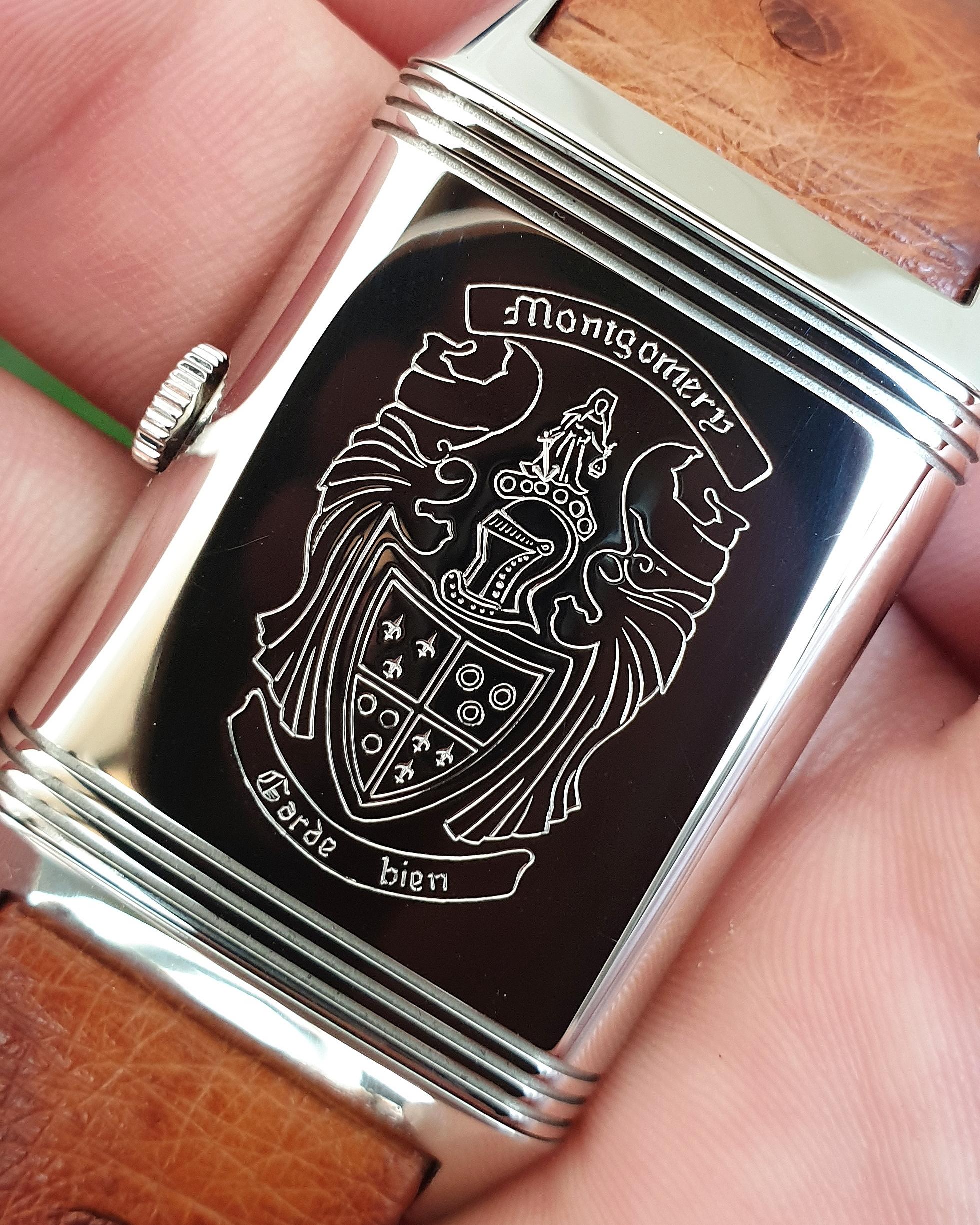 After seven months in the famed Vallée de Joux with the skilled watchmakers of Jaeger-LeCoultre, Hugh was delighted to have the watch returned to his wrist. The results are top-notch, and exactly what you would expect from a brand with the reputation of being the watchmaker’s watchmaker. The engraving is extremely precise, crisply finished, and the accuracy of reproduction from the initial drawing that Hugh provided as perfect as is possible.

While it certainly isn’t a fast process, it’s easy to forget that good things almost always take time, especially in the world of fine watchmaking.