Last week’s Celebrity Death Match was an absolute juggernaut, as we pitted Jay–Z’s watch collection against Drake’s in a hip-hop heavyweight showdown.

And while Hova clearly decimated Champagne Papi’s collection, this week’s fight to the death is set to be one for the ages.

We’re really ramping it up a notch, swapping out spitting bars for picks and guitars, facing off two of the foremost collectors in the world – John Mayer and Ed Sheeran. 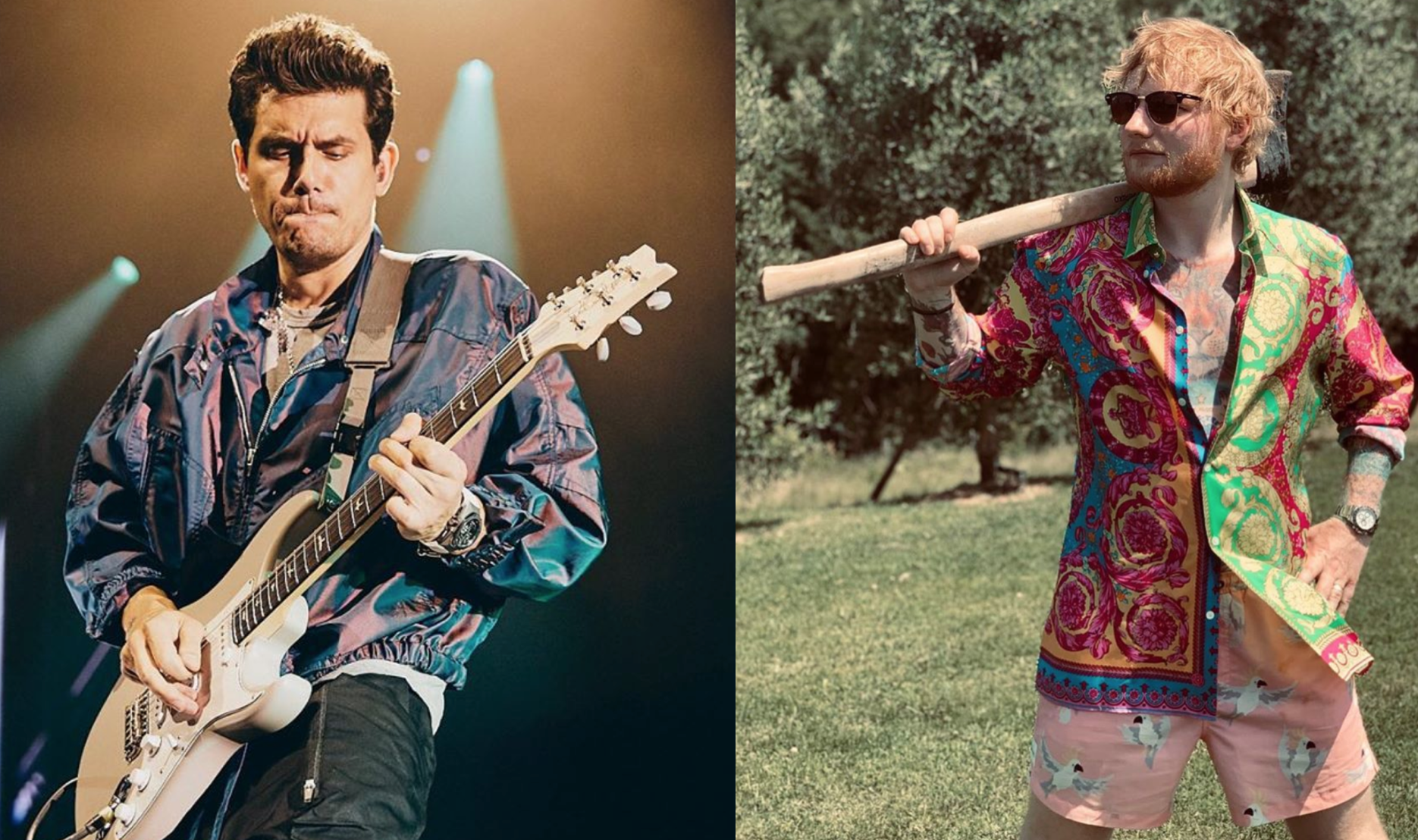 I should preface this bout of CDM by saying that both Mayer and Sheeran are the real MVPs of the watch world – both their collections are powerful enough to give you a figurative black eye.

But there can only be one winner in this death match, so like last week, we’ve split the main card into four categories. Let the games begin. 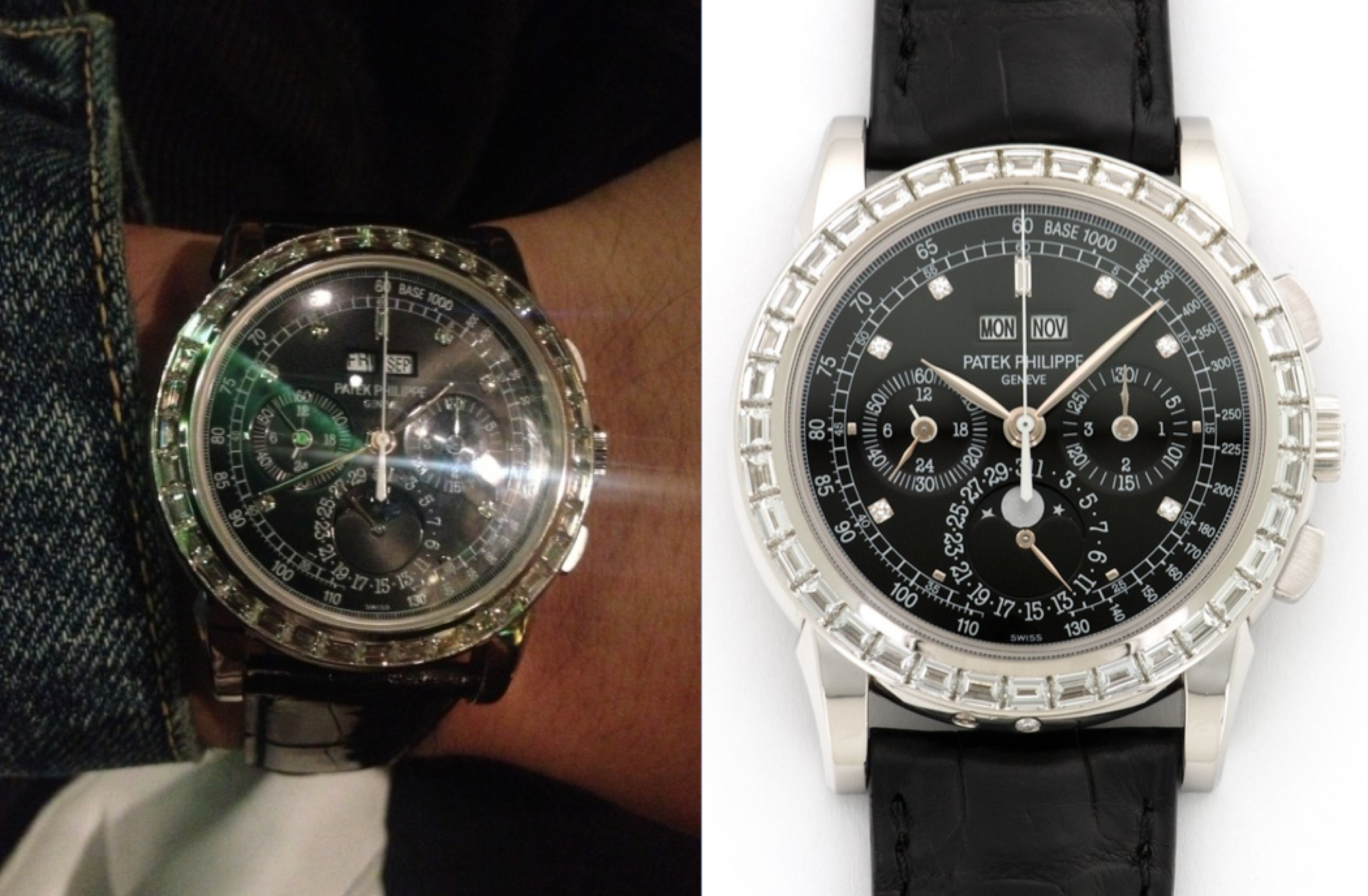 You knew Mayer was going to come correct in this category … the man has always been about the unparalleled classicism of Patek, and this watch exemplifies why. Not only is the 5970 widely regarded as one of the best watches ever made, but by adding a full baguette diamond bezel and brilliant cut diamond indices, thus creating the Ref.5971, there’s just a smidge of low-key rockstar in this watch that suits Mayer down to the ground. In fact, Ben Clymer, founder of Hodinkee, famously said that he thought of the icy wonder as “one of your (Mayer’s) watches”. Praise don’t get much higher. 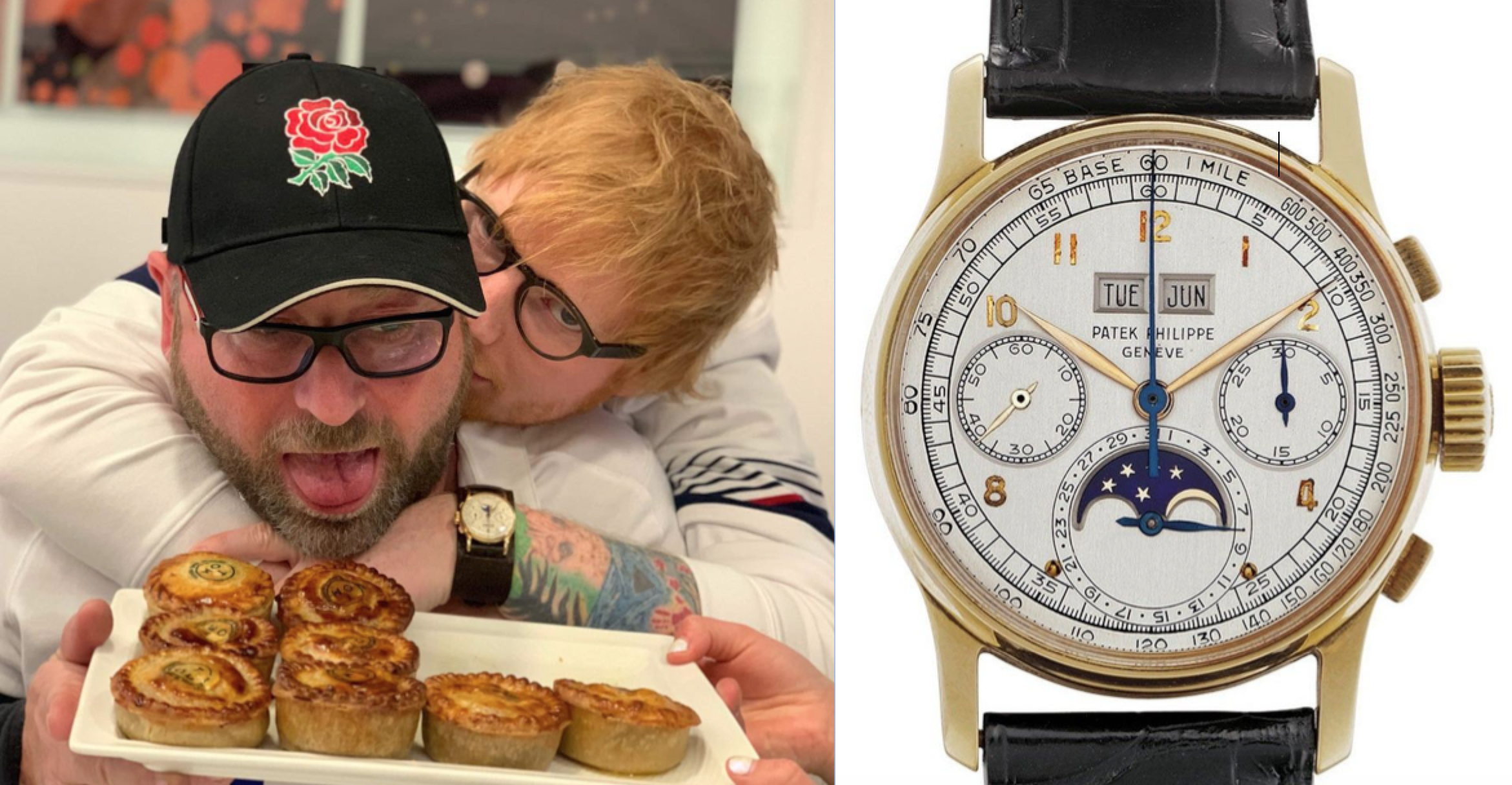 I’m very conflicted about Sheeran’s solid yellow gold 1518. On the one hand, you’ve got to give the ranger major props for just owning such a watch. 1518, for those who don’t know, is genesis – the first serially produced perpetual calendar chronograph in the world. And they are rare … I mean, really rare. Just 281 were produced. This watch clearly demonstrates why Sheeran is such a murderer of the watch game – he’s got some taste. Or, at least, I thought he did, until I saw that he’d paired the grail watch with a f*cking Bund strap … Seriously?! That’s a sin akin to rocking a PP QP on a NATO strap; it’s a massive no-no.

OK, I’m being a bit cute with this selection, as this watch isn’t technically modded or murdered out, but there’s no way I couldn’t mention Mayer’s one-of-one 5004G. In the world of watch collecting, being able to commission a pièce unique from Patek Philippe is about as serious as it gets, and it only happens when the relationship between the watchmaker and individual is stronger than, well, 18k white gold, for example. Mayer specced this watch up like a true connoisseur: salmon dial, luminous handset and a bespoke engraving on the caseback that reads “Mr. J. C. Mayer”. It’s the only one of its kind in the world, and it’s awesome. 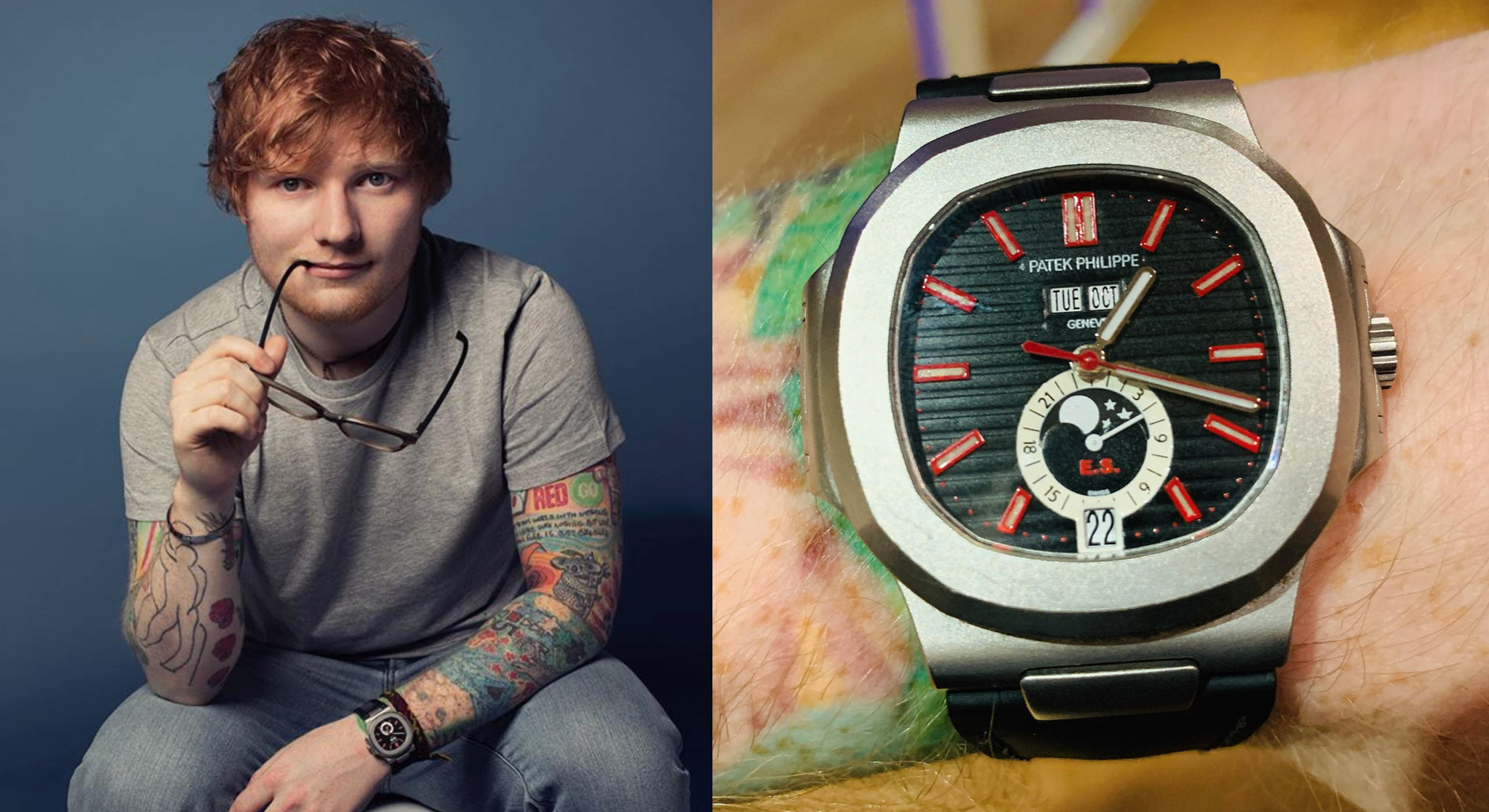 I find it vaguely hysterical that Sheeran, just like Drake, has a modified Patek Philippe 5726A. The Briton’s Nautilus has been tampered with by fellow countryman George Bamford, who’s gone about doing what he does best – destroying an otherwise beautiful timepiece. It takes some real cojones (narcissism) to think that you can design a watch better than the best watchmaker on planet earth, but that’s exactly what Bamford’s attempted to do … with shocking results. The stainless steel case has been given a satin finish that makes the watch look like a cheap knock-off, and the baton-style hour indices have been painted bright red in an attempt to match Sheeran’s head(?). Not sure why celebrity musicians keep insisting on modifying 5726s … but there needs to be a moratorium. 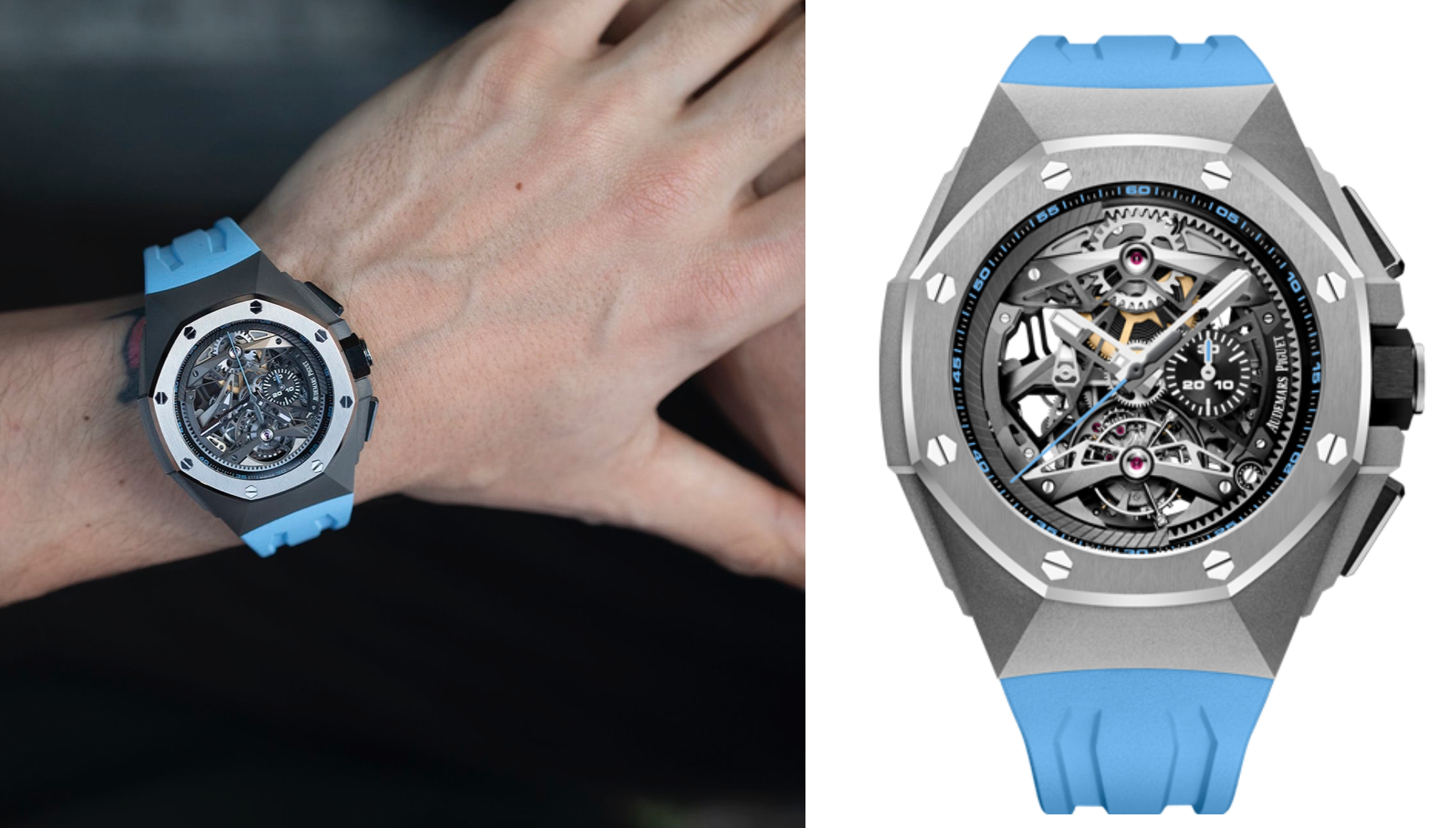 This is such a killer weekend watch, and it shows the breadth and depth of Mayer’s appreciation for horology. The timepiece itself is also wickedly enigmatic, blending aesthetics that look like it’s straight out of 3020 with watchmaking craftsmanship that dates back to AP’s founding in 1881. The baby blue accents and rubber strap are downright lackadaisical, and for those of you that think that Mayer wouldn’t actually wear this watch as a weekender … you’re dead wrong. Want proof? Check out this video of Mayer rocking the AP while knocking the cap off a bottle with a spinning back kick (and take note of the date the video was uploaded). 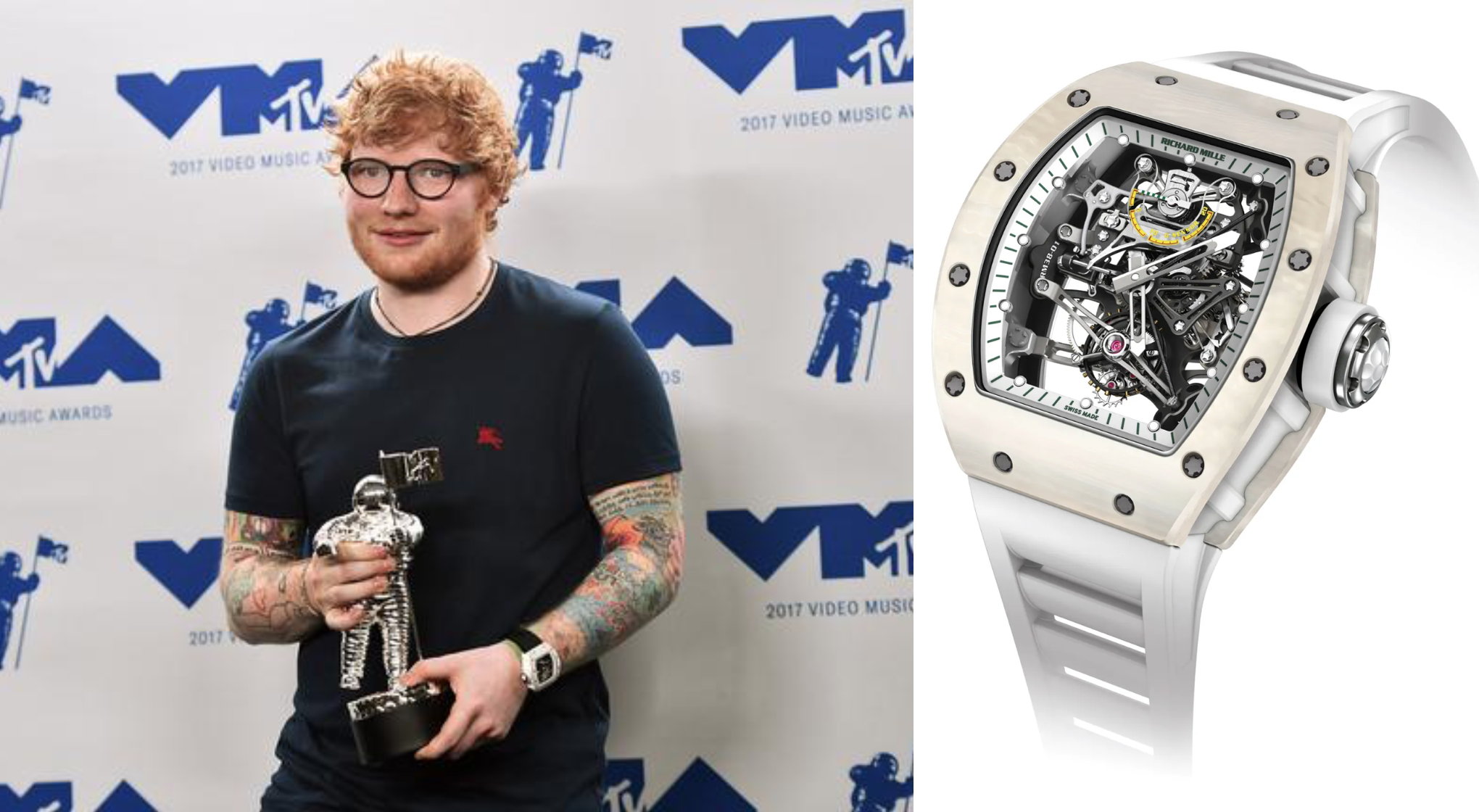 Anyone who’s been paying attention to Sheeran’s ever-expanding watch collection over the years will have noted that, just like Drake, the man’s a big, big fan of Richard Mille. It’s hard to say just how many RMs the red-headed wonder has, but needless to say, if you combined the value of all of them, it’d be enough to buy a mansion in Toorak. Sheeran doesn’t just go for run-of-the-mill RMs either (if such a thing exists), he only rocks the scarcest, most desirable examples. Chief among these rarified wonders is his Bubba Watson. To the untrained eye, or from just a glance, this watch may look like a regular Bubba. But take a closer look, and you soon realise that it’s the ultra-rare RM 38-01 finished in Quartz Tpt. This watch is worth well over a cool mill, and, as a result of being designed to be worn while playing golf, they can take a beating. 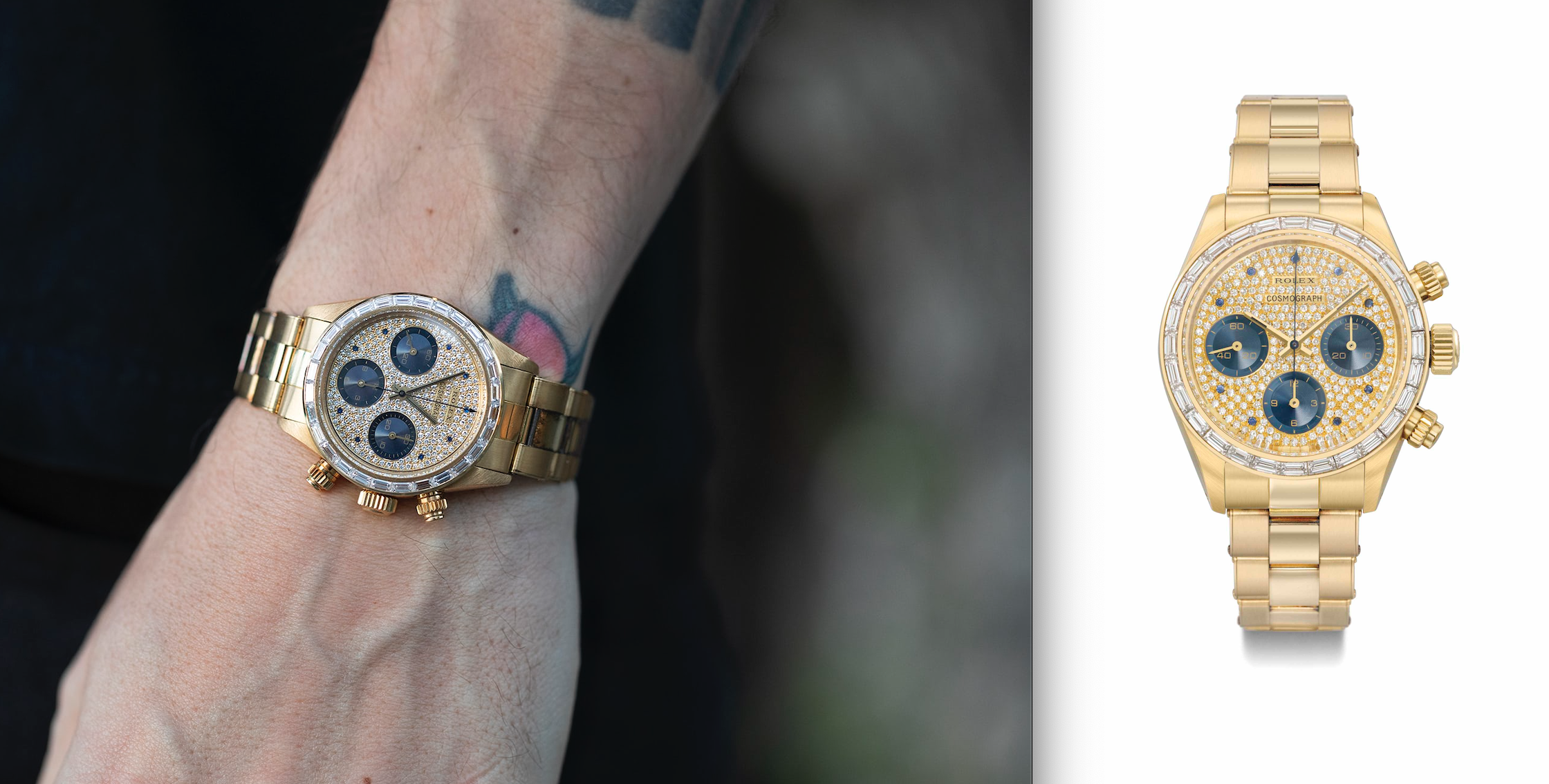 I let out an almost guttural “OOF!” every time I see photos of one of these watches pop up on Insta. Ladies and Gentlemen, allow me to present to you Mr Mayer’s ultimate throw-down, the Rolex Daytona Ref.6270 in solid 18k yellow gold. Things don’t get much flexier than this watch – it’s arguably the crowning glory of Mayer’s entire collection. Believed to be just one of eight in existence, this Daytona is all class. Baguette diamond bezel, full diamond pave dial, brilliant-cut sapphire hour indices, gorgeous engine-turned blue sub-dials … this watch has got the lot. And my god, is it worth a pretty penny. The last example that came up for auction was at Christie’s back in 2014, before the vintage Rolex hype train had kicked into maximum overdrive, and even back then, it still achieved a winning bid of CHF 905,000 (roughly $1.6 million Aussie dollars). Bravo, Mayer. Sheeran is going to need to have a pretty impressive timepiece to beat this.

Wow … just wow. I don’t normally give the result of these matchups away until the end, but Sheeran has done it, this watch wins. Period. A Patek Philippe Grand Complication is a special thing – it represents the very pinnacle of haute horology. And this particular Grand Complication, the 5208P-001, is, in my humble opinion, the mac daddy. I often toss and turn with what my ultimate grail watch would be … but if I’m being completely honest, it’s this watch. Platinum case, monopusher chronograph, perpetual calendar and a minute repeater. Nuff said. And Sheeran actually wears it, A LOT, which is crazy when you consider that it’s worth well over 1,500,000 AUD. You don’t buy a watch like this unless you’re so far down the rabbit hole that there’s no way out. And the fact that Sheeran actually uses it and it’s not just a safe queen like so many other 5208P-001s would be, is perhaps the ultimate flex.

So, there you have it: John Mayer, the man, the myth, the legend, has conquered Ed Sheeran in a death match like no other. However, it’s worth mentioning that Sheeran has only been collecting since 2011 – the man’s just getting started. Maybe one day, these two leviathans will meet each other again in this amphitheatre.