Watchmaker Anicorn has teamed up with the most important space exploration outfit on the planet(s), NASA, to create a brand new watch that aims to celebrate the Perseverance Rover touching down in Jezero Crater on Mars. And the results? Ladies and gentleman, we bring you the most bizarre watch of 2020.

Called the Mars Time, this striking hexagonal timepiece has been styled as a homage to the space traversing all-terrain vehicle, and the finished product is so out of the ordinary it looks like it could’ve been created in a bunker near Area 51. Either that or its a short stack of pieces of desiccated orange, spray-painted white within a hexagonal fruit bowl. It’s all in the eye of the alien beholder. 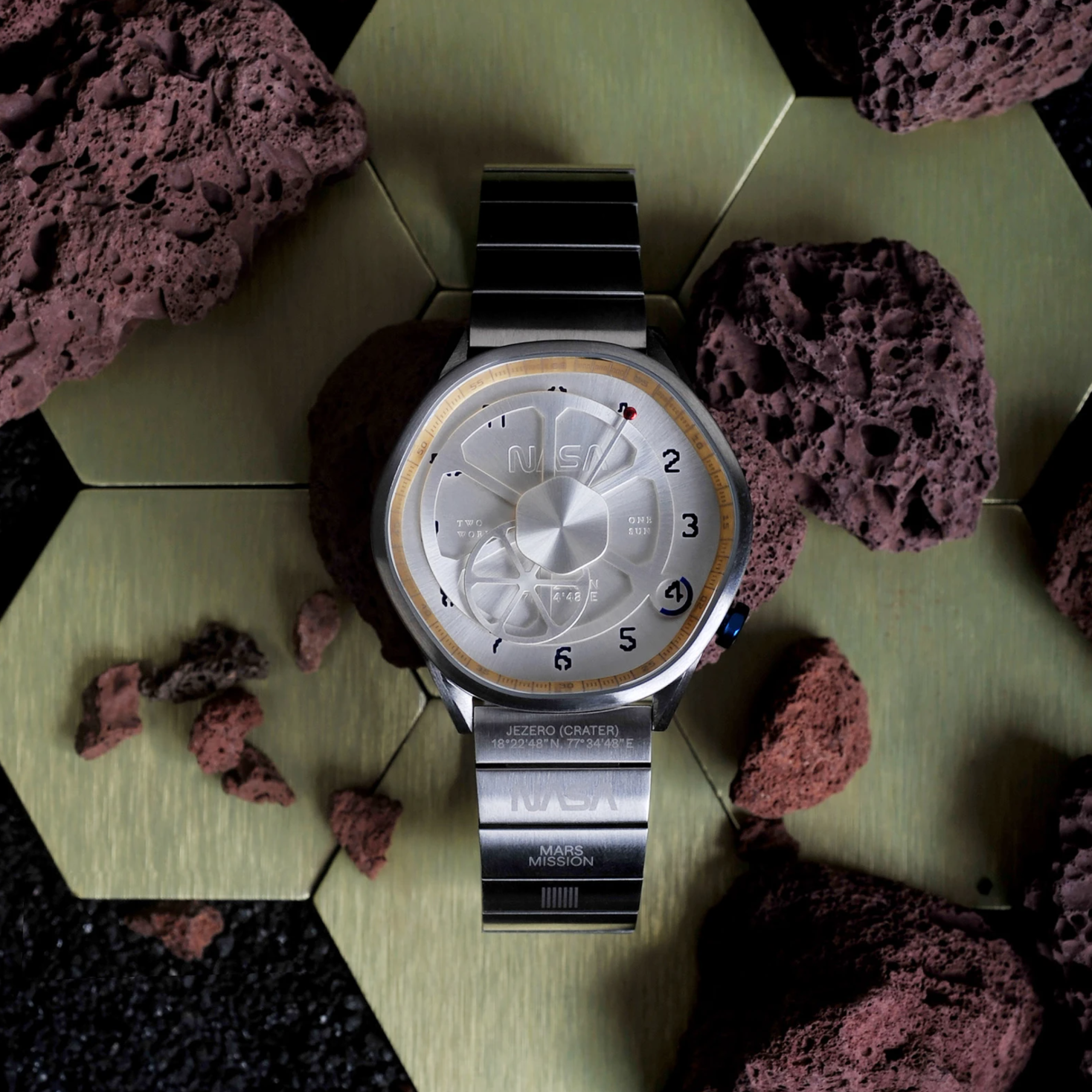 Mind you, though, while the 42mm (12.5mm thick) satin-brushed 316L steel case is positively futuristic, its hexagonal shape is one that really fits within the extraterrestrial theme. It’s just strange enough to be out of this world. The lugs are relatively short, but articulate downwards for comfort, and likely mean it would wear no smaller or larger than the 42mm on the spec sheet suggests. The caseback features a blued steel frame that holds the sapphire crystal display window in place, and offers a look at the watch’s mechanical innards that are most certainly created on Earth’s terra firma. 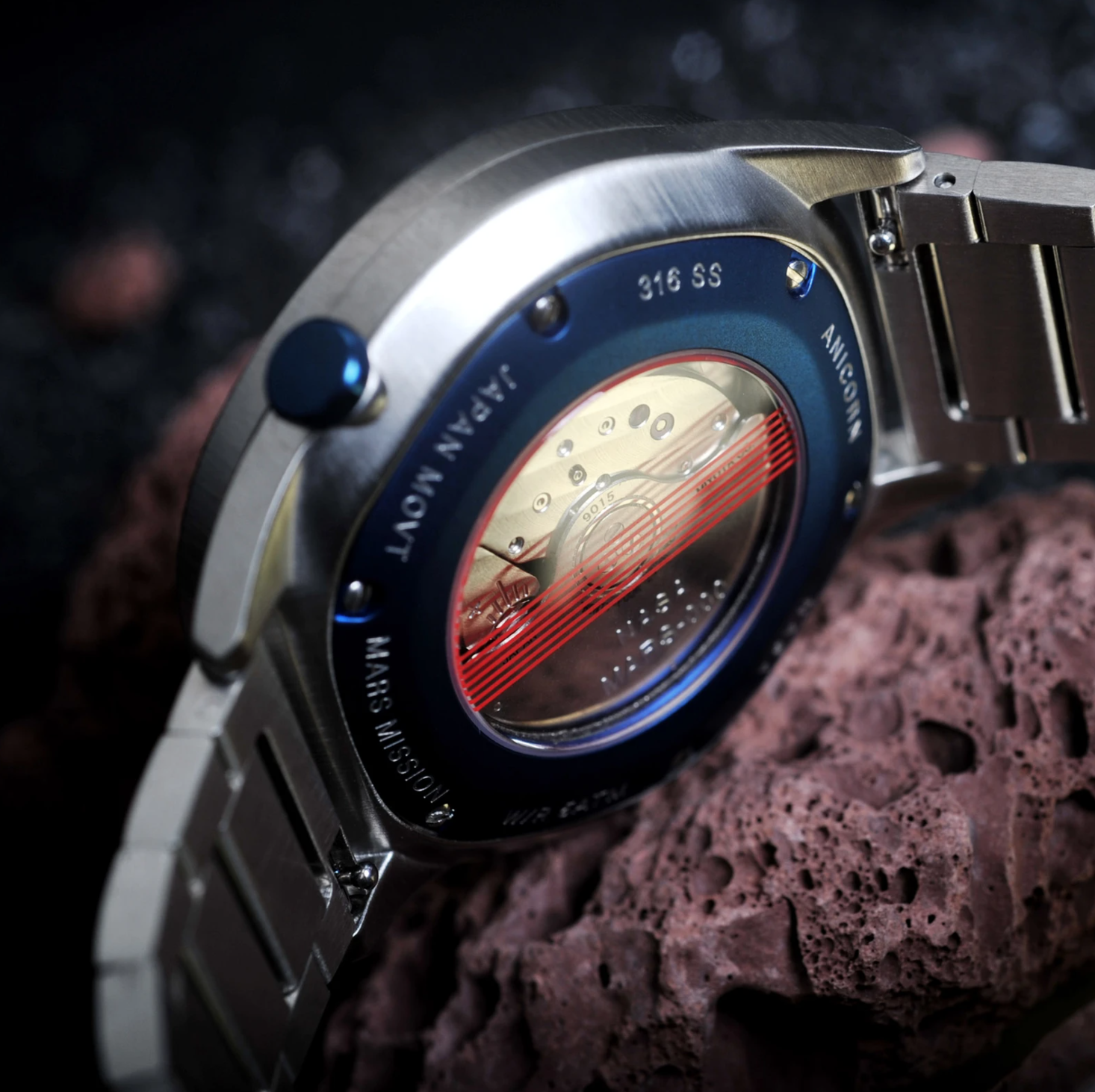 Despite the from-the-future – or the fruit bowl – looks, don’t expect future tech behind the dial, just a hardworking, dependable Miyota Calibre 9015. And that’s a good thing, because the Japanese movement offers up 24 jewels, 28,800 vph, and accuracy of -20/+40 seconds per day and 42 hours of power reserve. While it might not have the razor-sharp internal angles of hand-finished chamfering, the movement is minimally finished in a way that feels in keeping with the rest of the aesthetic. Or specifically, pared back and utilitarian. Plus, if you ever needed to repair the movement, the parts are so widely available that getting service parts to Mars wouldn’t be too much of a challenge. 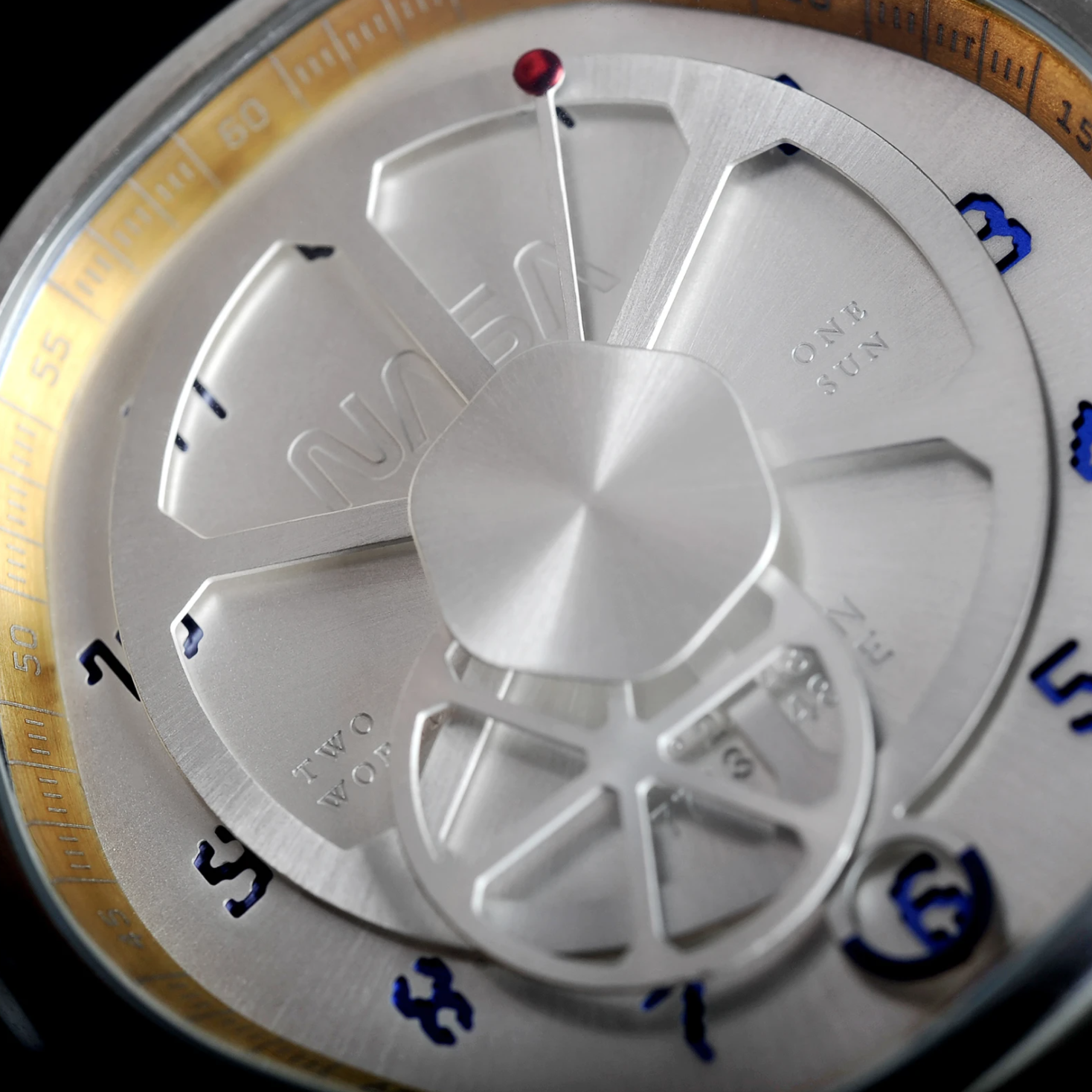 The no-nonsense mechanical movement is also responsible for the most extroverted feature of the watch – its dial. The satin-brushed sunburst base, engraved with the coordinates of Jezero Crater and the words “Two Worlds, One Sun”, has been adorned with the funkiest handset we’ve seen in ages. Both the hour and minute hands mimic that of the Perseverance Rover’s six-spoke wheels. The larger hour wheel has a hollow blue aperture, which represents Earth, that slowly moves its way over the very contemporary Arabic numerals, while the minute hand is attached to the smaller wheel, and features a small red metallic dot at its tip that’s obviously meant to portray Mars. There’s no second hand; what you get instead is a six-sided disc at the centre of the watch that’s identical in design to the case, and it constantly rotates. We’ve included a video from Anicorn below to leave you in no doubt as to how it operates — and you’ve got to admit, it’s pretty neat. 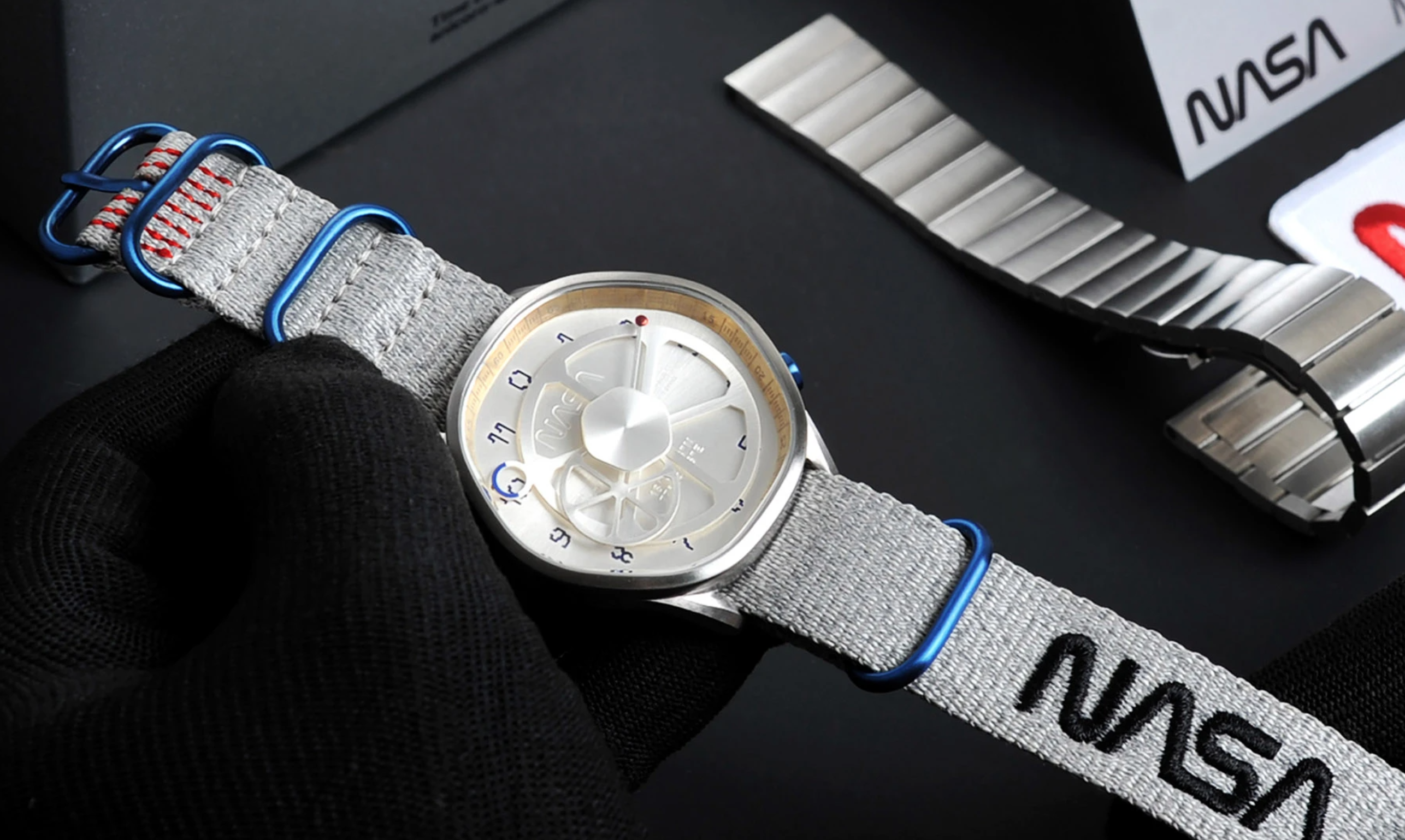 Attached to the Mars Time will be a tapered satin-brushed 316L steel bracelet that also benefits from some choice engraving that includes the coordinates of Jezero Crater and the fabled NASA worm logo. Lucky owners will also score a silvery textile strap that is also bestowed with the NASA worm logo, which is a nice touch. 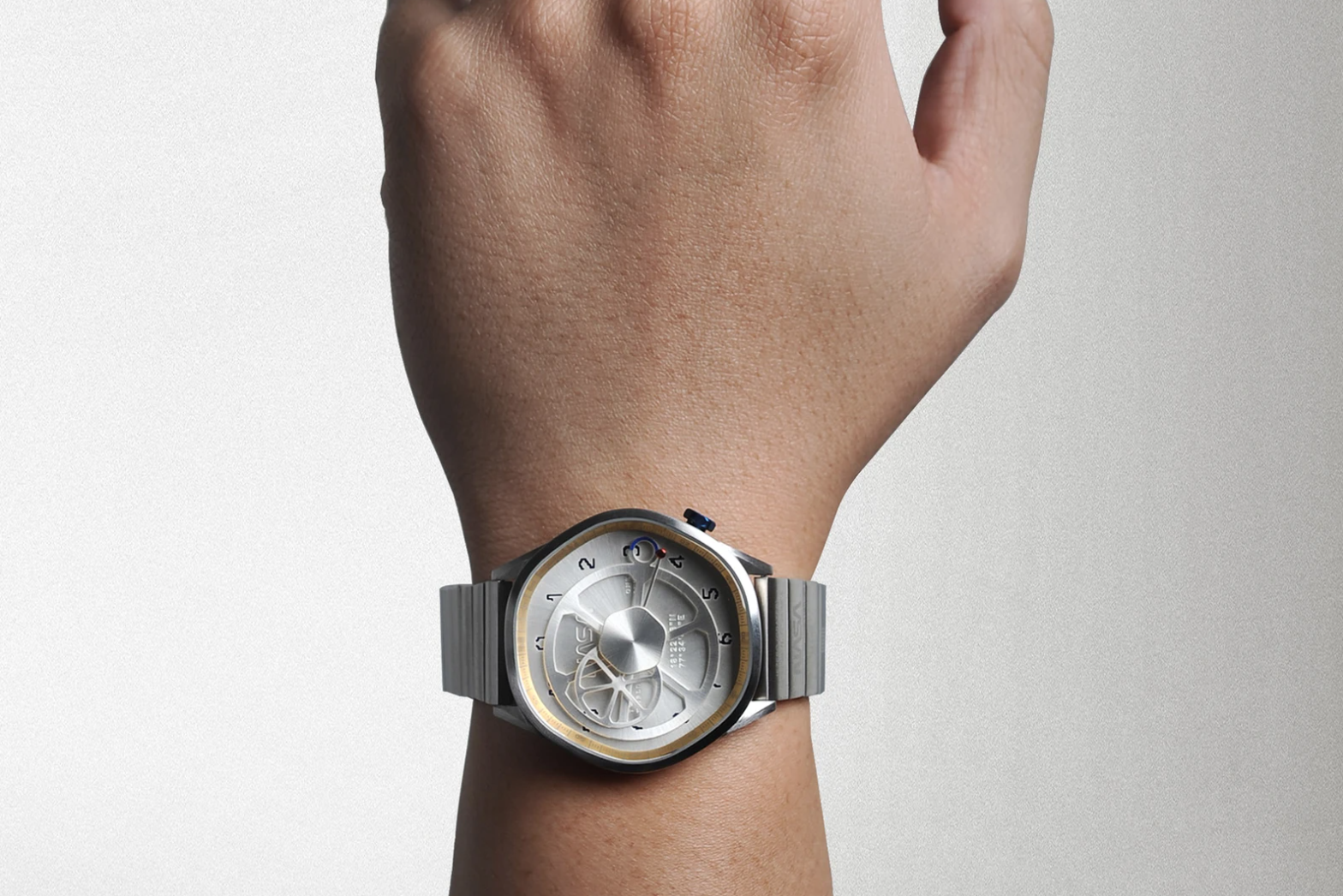 Just 200 examples of the interplanetary timepiece will be produced by Anicorn, with a recommended retail price of $895 USD (roughly $1400 AUD by the time it lands here), and you can purchase the watch directly from Anicorn by clicking here. So, if you’re a fan of space exploration of the Red Planet, you’d better act fast, because this watch is likely to sell out quicker than Elon Musk can say X Æ A-12.