January … they really were simpler times: no global pandemic and no lockdowns. The first month of 2020 also saw TAG Heuer completely and utterly steal the show at LVMH’s Dubai Watch Week with the limited edition, nigh-on faultless Carrera 160 Years Silver. In fact, it was such a good timepiece that T+T founder Andrew McUtchen said it “might be the perfect watch”. Sadly, however, it wasn’t perfect, because TAG only made 1860 of those beauties, and they sold out almost instantly. 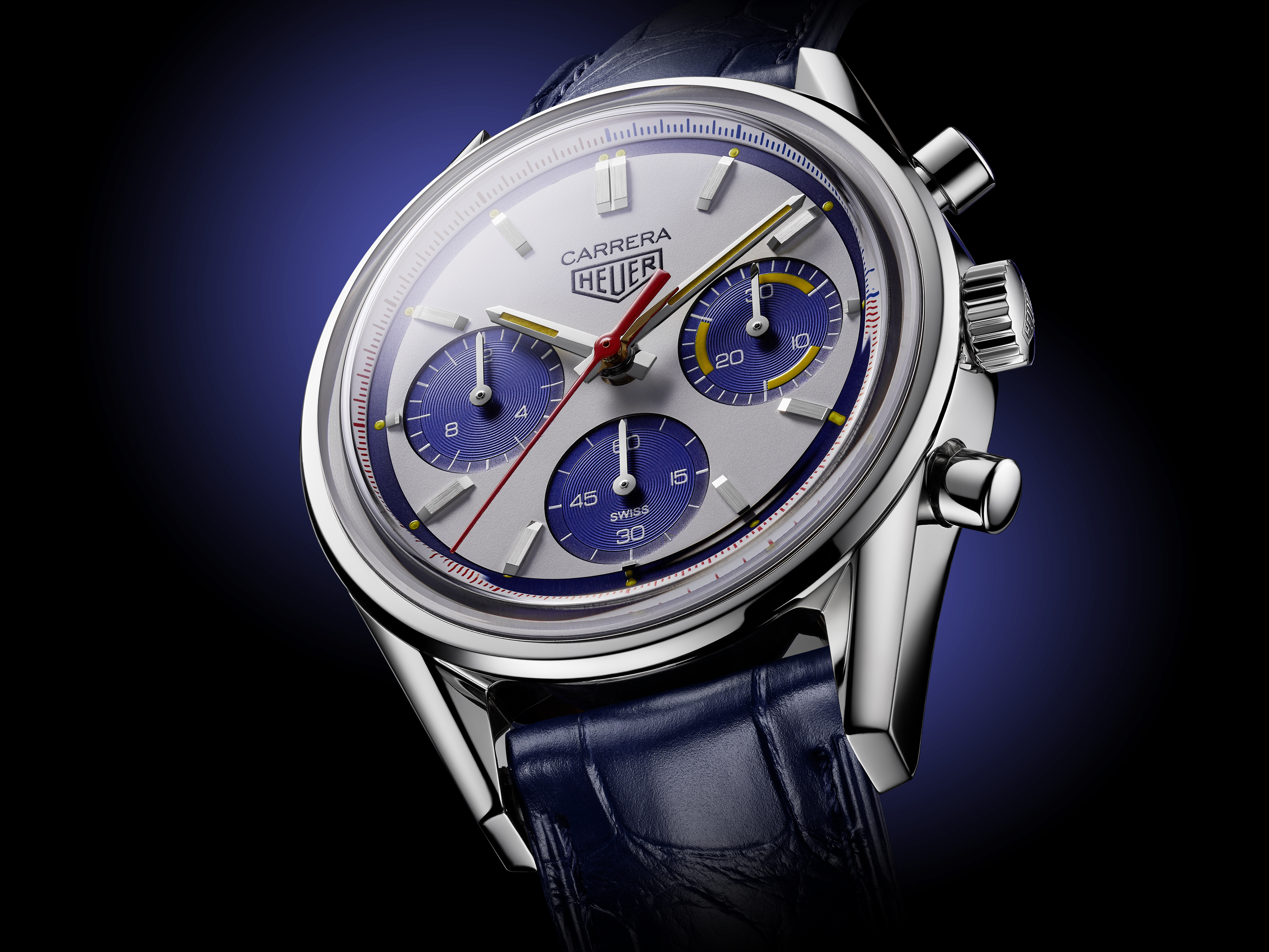 All hope is not lost though, because while you may no longer be able to purchase the Carrera 160 Years Silver, the legacy Swiss watchmaker has just unveiled this – the TAG Heuer Carrera 160 Years Montreal Limited Edition. Stylised to pay homage to the 1970s Heuer Montreal chronograph, this new Carrera just oozes retro chic, and arguably offers even greater visual appeal than its Silver sibling. 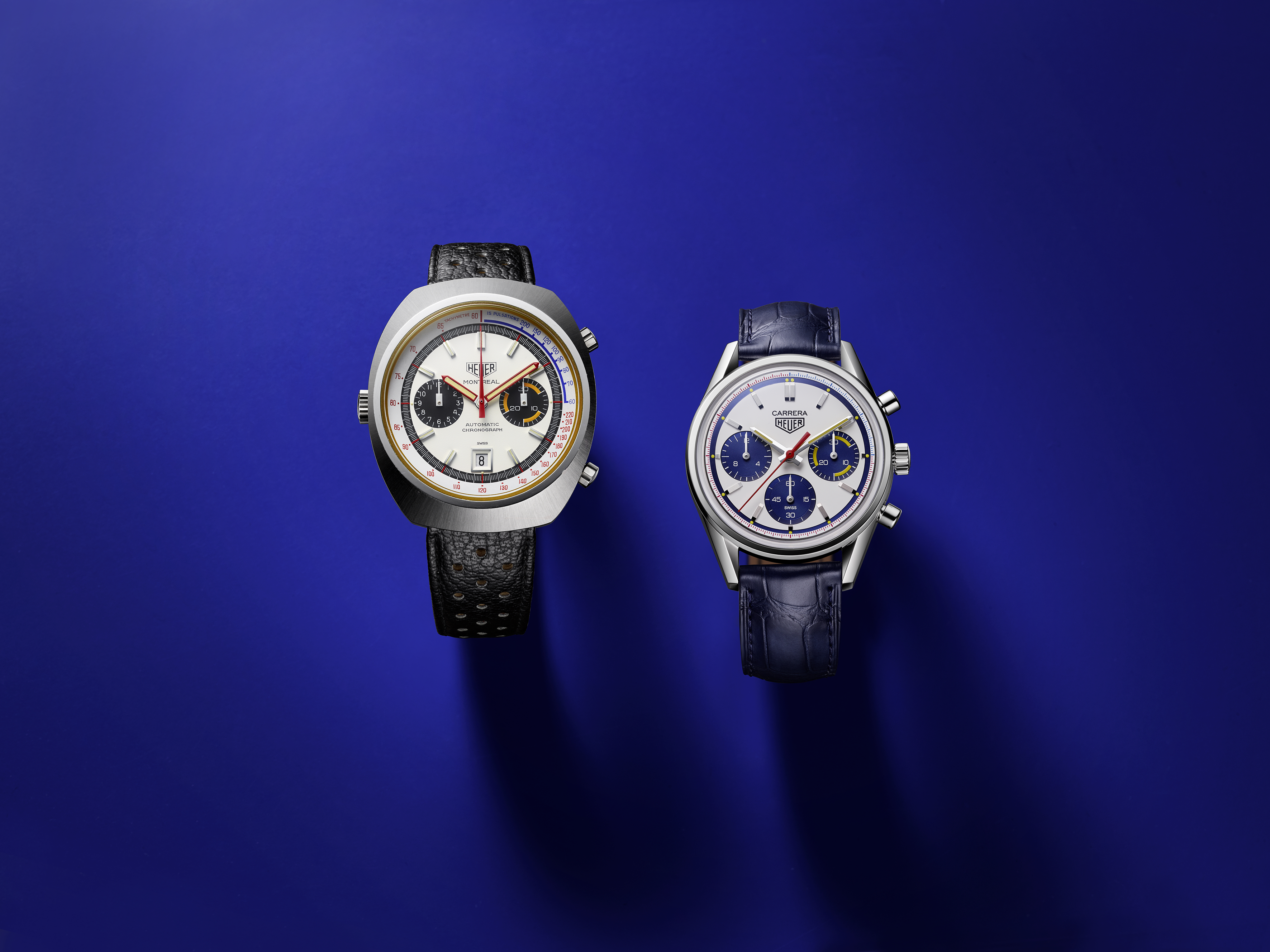 The dial, for instance, has so much more going on. The stark white base is contrasted, and complemented, by splashes of all three primary colours – blue, red and yellow – and the resulting aesthetic is one that appears equal parts busy and beautiful. Starting at the outer edges and moving inwards, the open minute track is separated into two colours, with the first 15 minutes of the track being coloured navy blue, and the remaining 45 minutes coloured red. Inside the minute track, a solid navy blue border is topped with yellow dots of Super-LumiNova, which sit above each of the applied rhodium-plated hour indices. 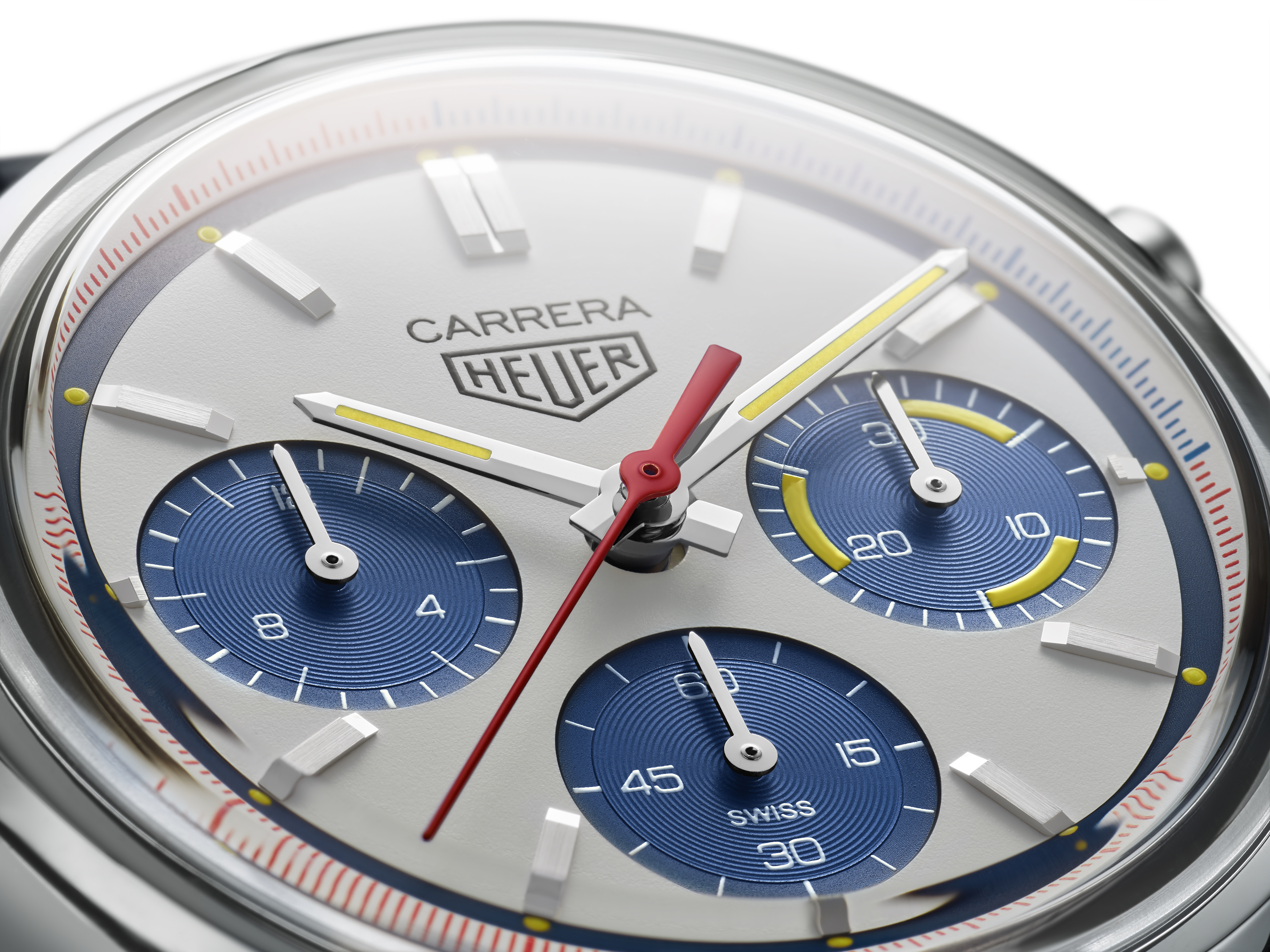 Both the rhodium-plated hour and minute hands are also filled with the yellow Super-LumiNova, while the chronograph seconds hand is finished in a bright lacquered red. The three concentrically patterned chronograph sub-dials — located at three, six and nine o’clock and displaying a 30-minute totaliser, running seconds and 12-hour totaliser respectively — are also coloured navy blue, which creates a very handsome juxtaposition against the white background. We’re also big fans of the yellow Super-LumiNova that has been applied to the 30-minute totaliser at five-minute intervals, as it’s a nice nod to the original Montreal and it just looks great. 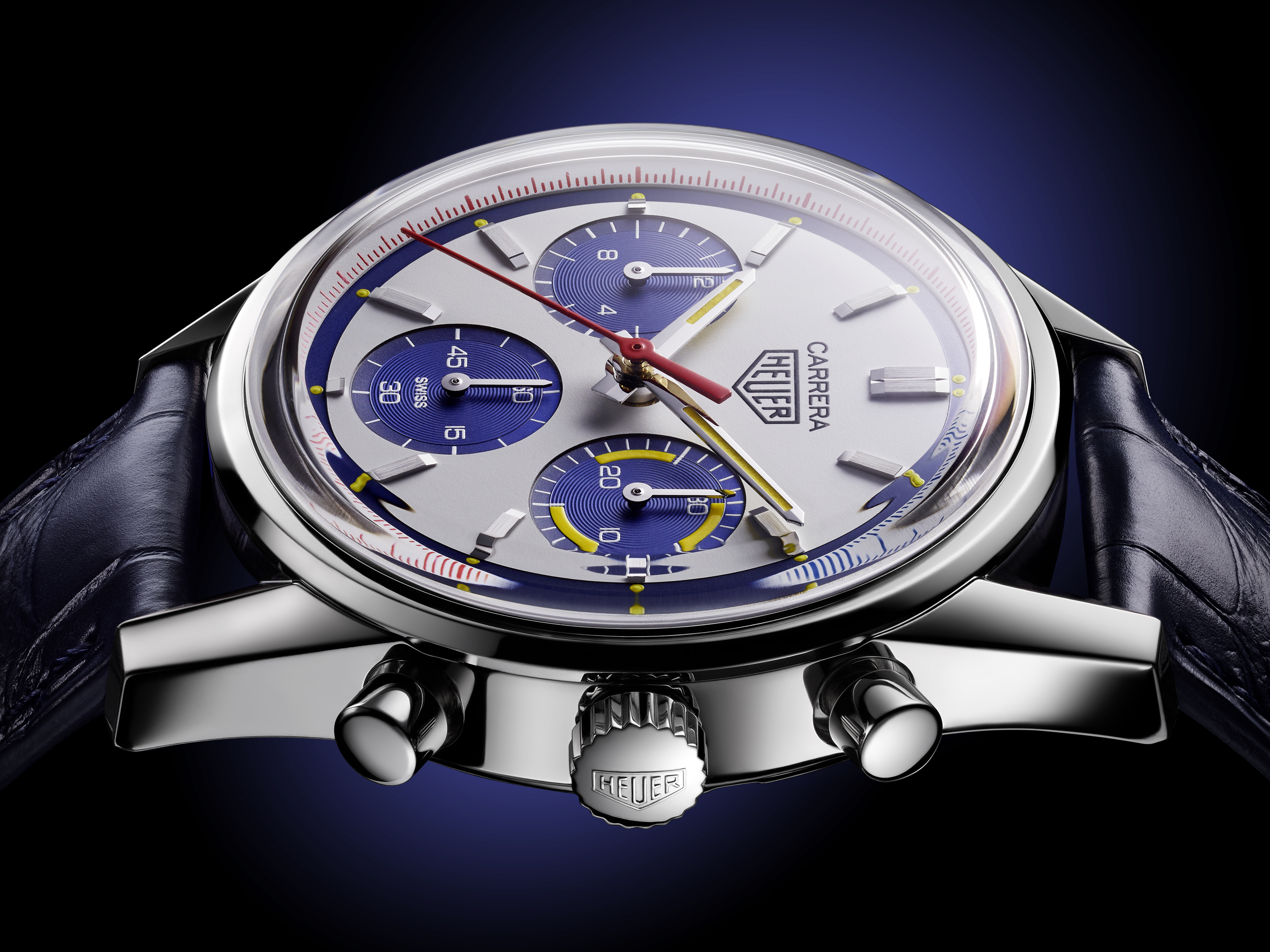 The appealing looks continue with the polished stainless steel case that retains the same dimensions and visual cues as the Silver Carrera. That means a handsome and versatile visage, which measures just 39mm across and roughly 15mm thick, and some gorgeous features such as elegant lyre lugs and diminutive piston-style chrono pushers. The Carrera Montreal benefits from not only a domed sapphire crystal with anti-reflective coating on its front but also a flat sapphire crystal display caseback that enables lucky wearers to glimpse the manufacture movement. 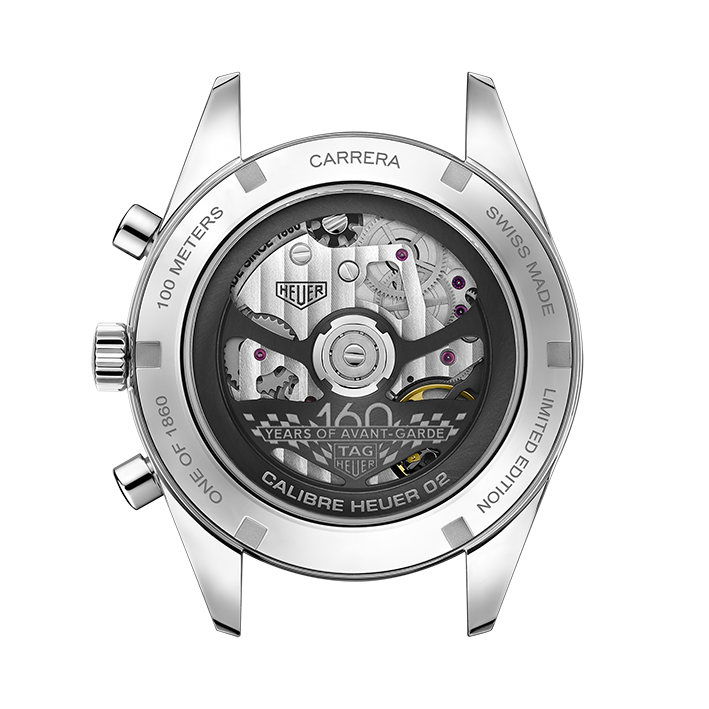 Calibre 02 is TAG Heuer’s flagship self-winding chronograph movement, and this particular iteration of the calibre is very nice indeed, with a skeletonised oscillating weight engraved with a motif that celebrates the watchmaker’s 160th anniversary. Other features of the movement include a chronograph complication with both column wheel and vertical clutch, an operating frequency of 28,800 vph and approximately 80 hours of power reserve. 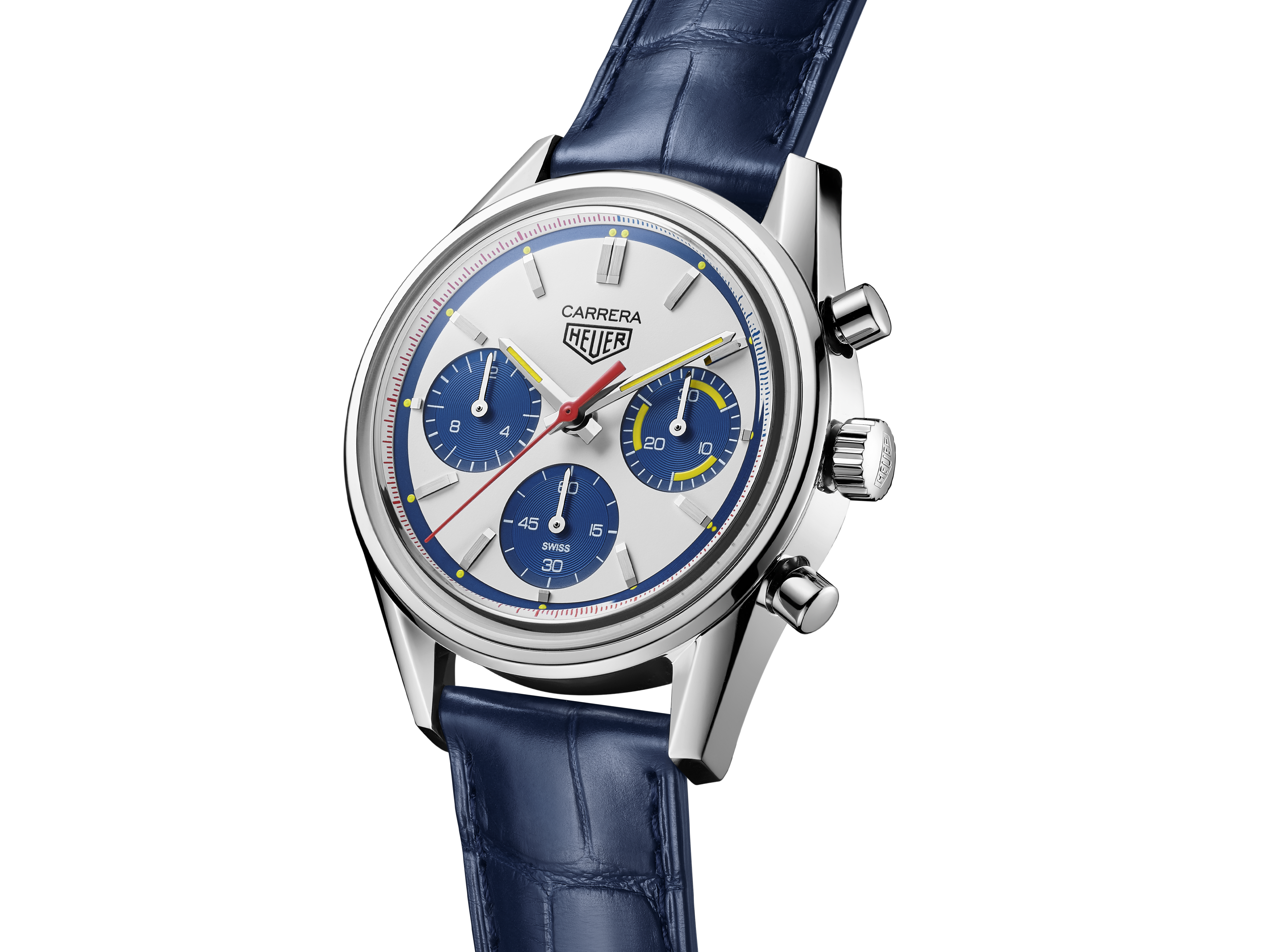 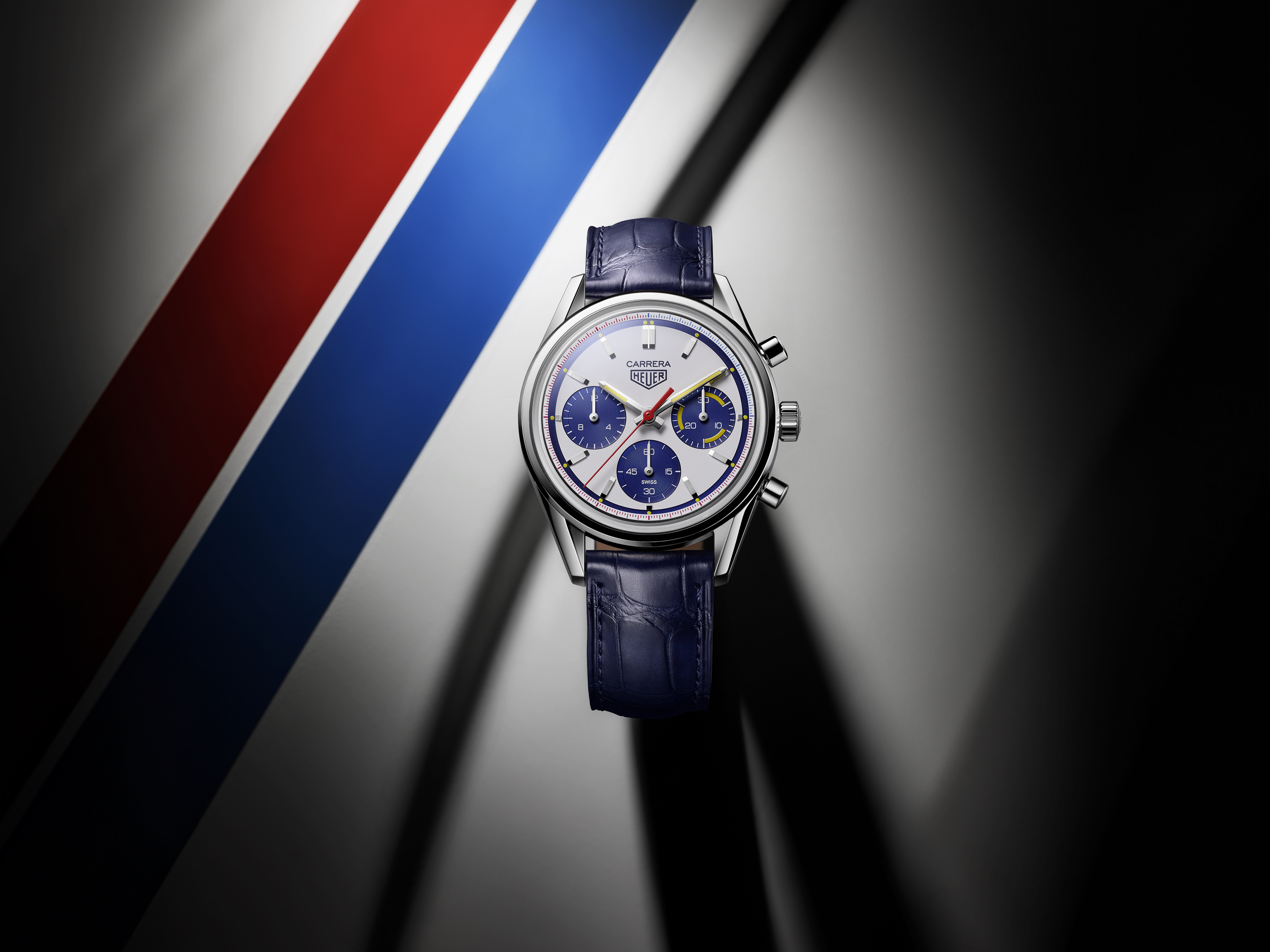 TAG Heuer is making just 1000 examples of this chronograph worldwide, and if I were you, I’d beg borrow and steal to make sure you get your hands on one of these – it looks that good.