Editor’s note: Few other types of watches have transitioned so well from being utilitarian tools into weekend warriors as military-spec watches. Whether it be a broad arrow brandished member of the “Dirty Dozen”, a vintage Tudor Submariner used by the Marine Nationale or even a more contemporary Bremont Broadsword, watches that have been and are used by armed forces are just cool. And their robustness, tactility and ability to look great when paired with a camo green textile strap mark them out as the perfect watch to be worn Saturday through Sunday. A while ago, we took a look at Andre’s vintage Longines Greenlander, and if you’ve got the time, it’s definitely worth a watch.

To most people, The Dirty Dozen is the prototypical misfit movie, starring the late, great Lee Marvin. But to watch fans, it’s something else entirely. In watchland, the Dirty Dozen refers to the 12 suppliers of watch, wrist, waterproof timepieces (the WWW engraving on the caseback) to the British Ministry of Defence during World War II. Some of those suppliers, such as Longines, IWC and Omega, are well-known names today, but others, like Timor, Vertex and Grana, are consigned to those particularly brutal pages of history. But, as with all things military, these watches have a cachet and a cult following, thanks to their utilitarian style. And amongst aficionados of the Dozen, the Longines Greenlander is seen as one of the most desirable. It’s fairly rare, with only about 8000 being made, but it’s also the largest, at 38mm, and has an interesting stepped design. All things that proud owner Andre points out. What makes this watch even more special (to my mind at least) is that Andre wears it regularly, and without fear. Andre’s example is special in that it’s retained its radium dial, and looks exceptional on that worn fabric strap. A beautiful watch, worn well and full of history. 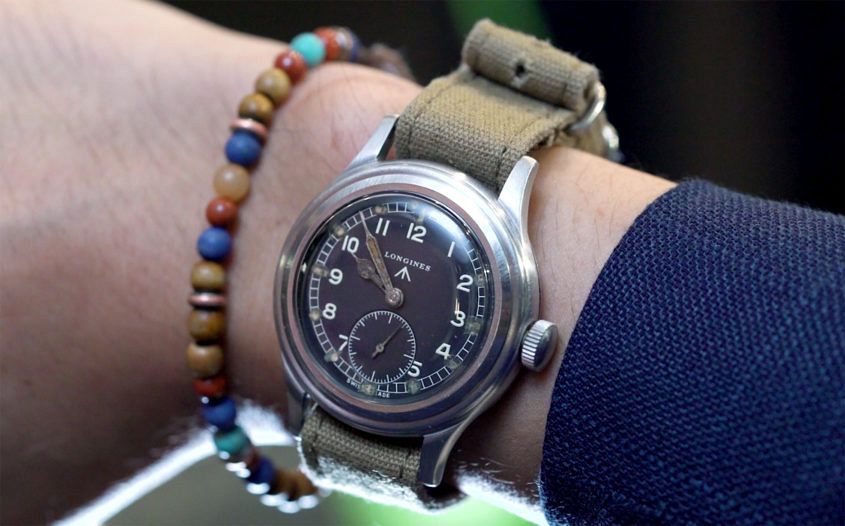