If you have been plugged into the watch world this year, then you are likely well aware of the fact that this is the year of green. It is the hot colour, with every manufacturer taking their own swing at the previously lesser seen dial tone. As a result, the colour has lost a little bit of its novelty and shock value. So, if a brand is going to introduce a green dialled watch it can’t just be ordinary – it needs some extra spice to stand out. Oris, however, came correct today with its latest limited edition novelty. The new Oris Okavango Air Rescue limited edition watch marks the 10th anniversary of Botswana’s aeromedical rescue organisation: Okavango Air Rescue. The organisation began as a medical service provider specialising in emergencies and airborne evacuations and has since grown into a provider of general medicine to both locals and tourists in the area as well. It is this very region that has inspired the grassy green dial of this limited edition Big Crown ProPilot’s watch, another intriguing reflection of Oris’ appreciation for nature and service. 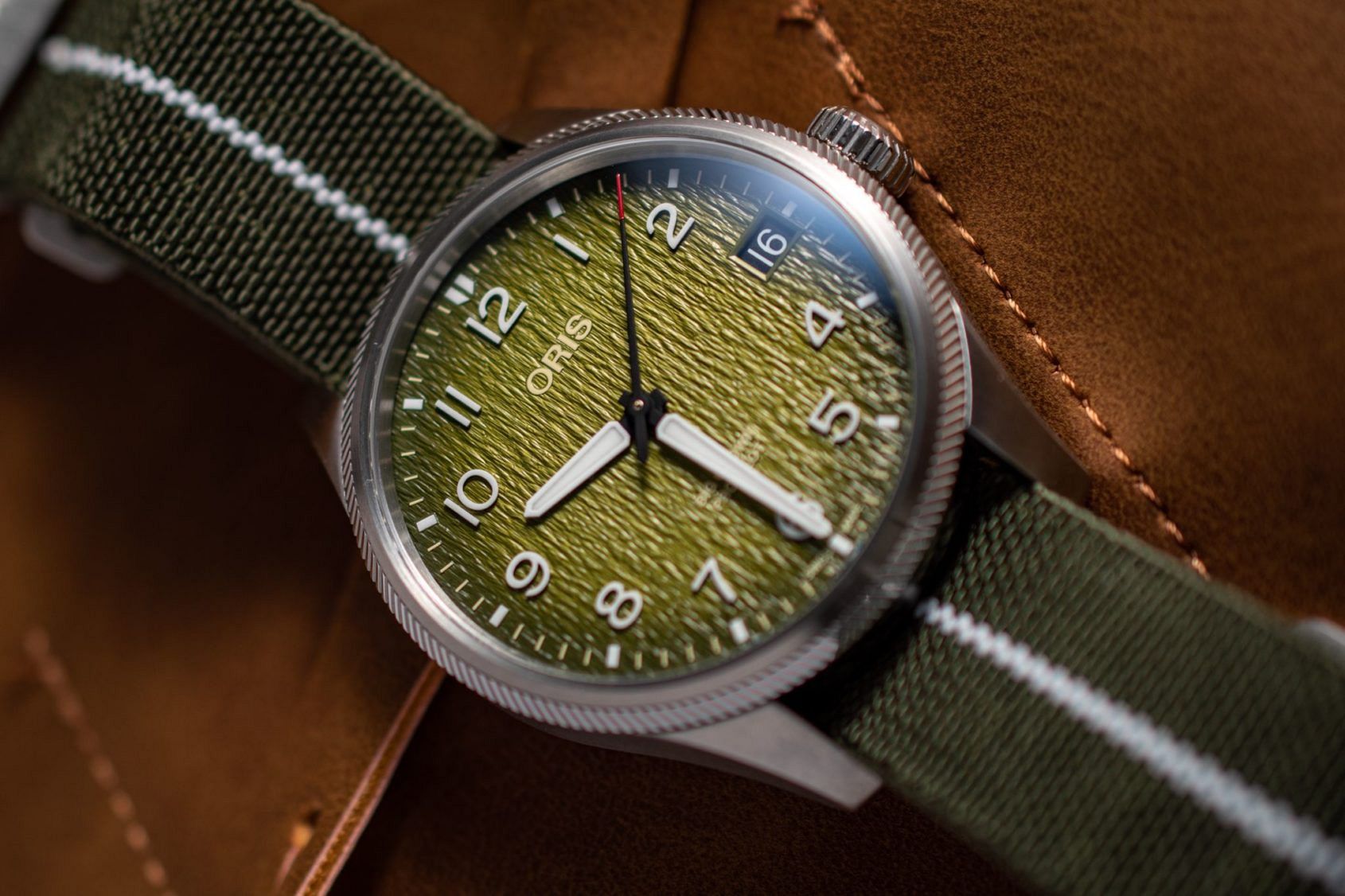 The Oris Okavango Air Rescue Limited Edition is a Big Crown ProPilot’s watch, cased in heavily satin-brushed stainless steel with a turbine motif surrounding its bezel. A robust summer option, the watch, 41mm in diameter, 13mm thick, and 49mm lug-to-lug, is 100 metres water-resistant with a screw-down crown for an added layer of security against moisture intrusion. 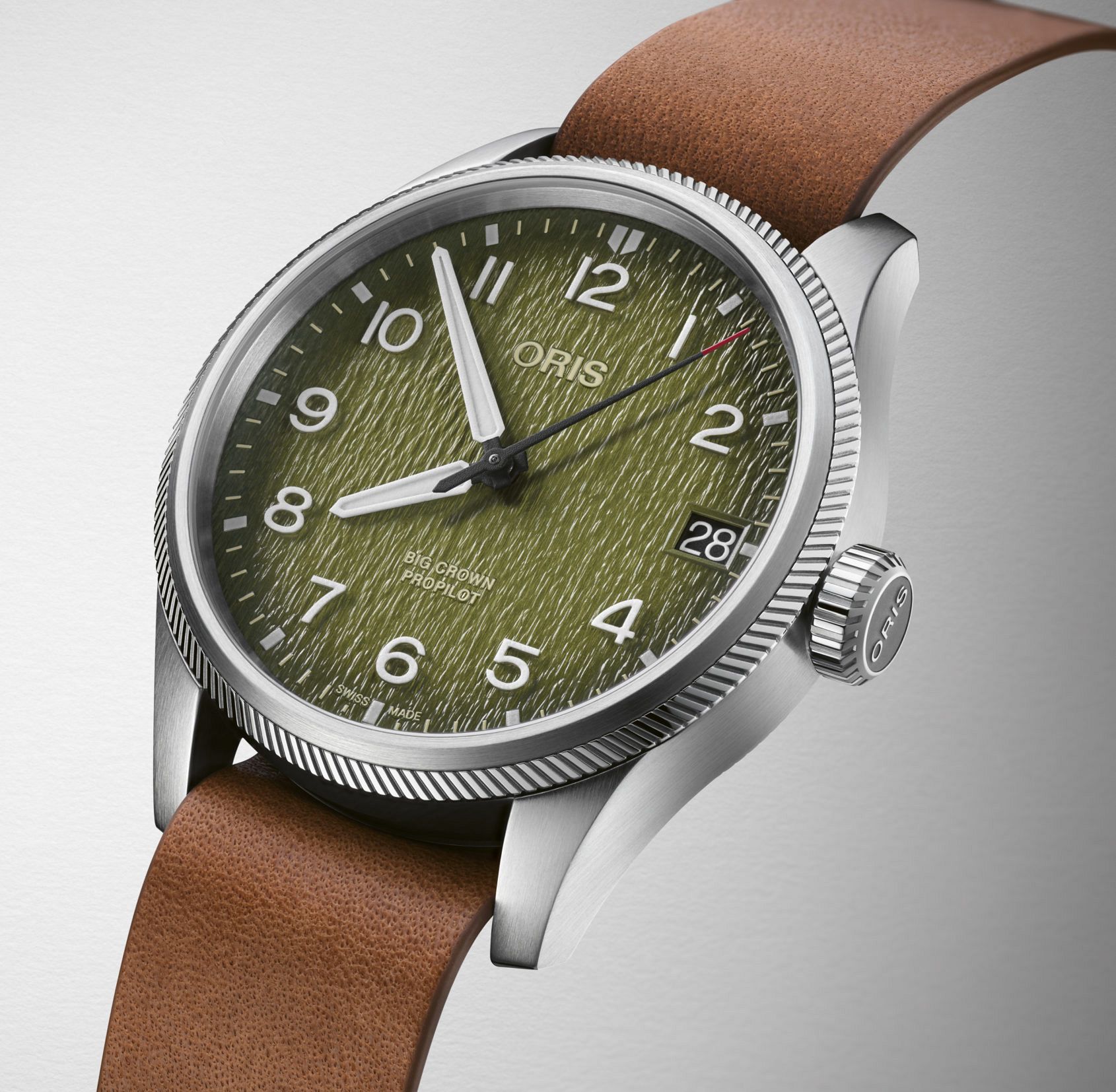 Its grassy green dial is the largest draw of the offering without a doubt. When I first saw it, it made me think of the Grand Seiko White Birch a bit. While it strikes the same chord of nature-inspired intrigue, it is a totally different texture up close and really stands out from previous green dial releases this year. According to Oris: “Inspired by nature, the green dial of the Okavango Air Rescue Limited Edition mimics the grasslands of Botswana’s lush Okavango Delta, where the O.A.R. has been operating for 10 years”. Its texture and tone are a feast for the eyes aesthetically, but Oris remains true to the mission of a Pilot’s watch – maintaining the utmost level of legibility as well. 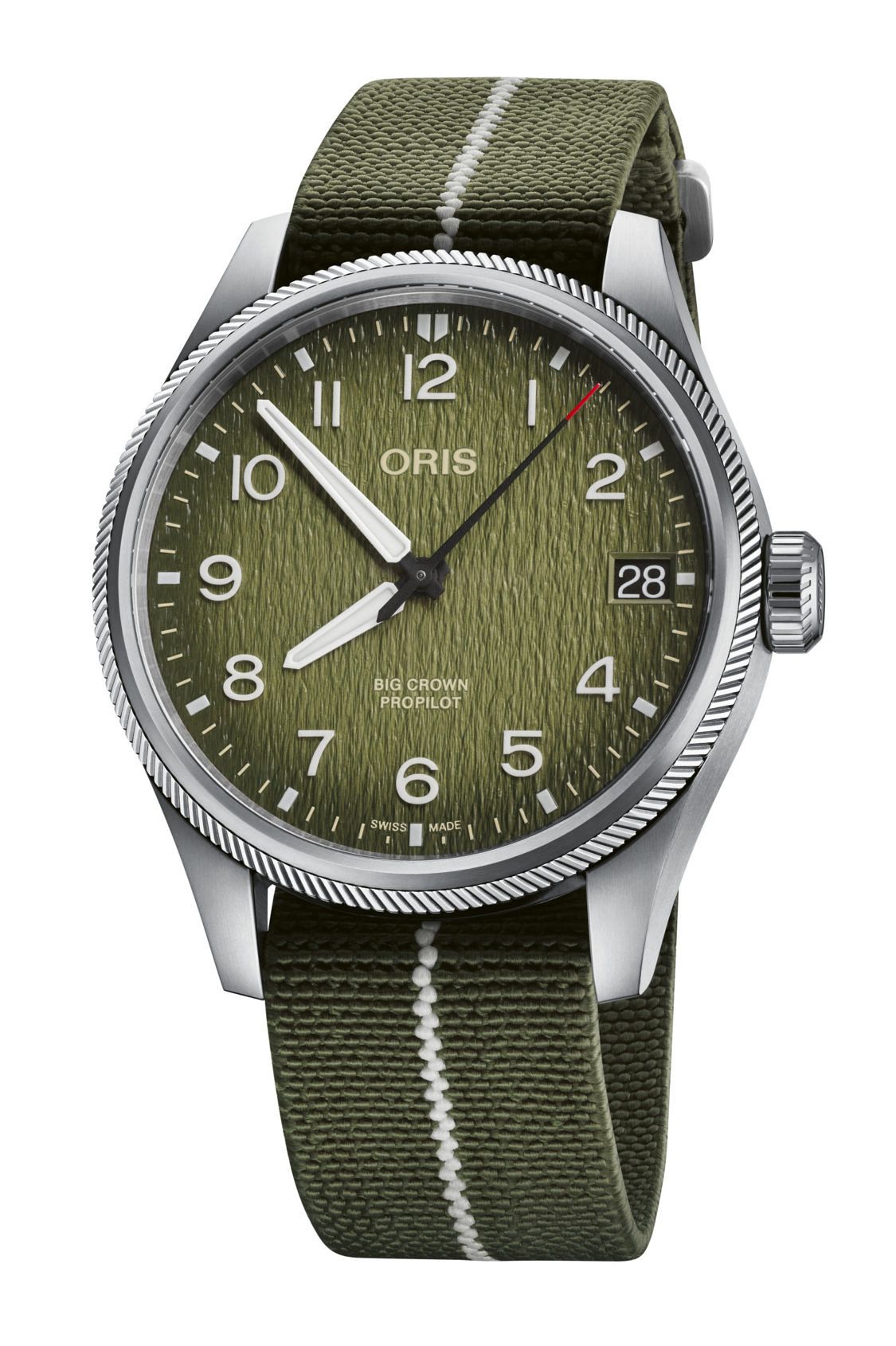 Large applied Arabic numerals surround the outer perimeter of the dial, framed only by the hashed outer minutes track and squared hour indices. The hours and and minutes hand, as well as the hour indices that correspond to each Arabic numeral, are filled with ample SuperLuminova® to ensure visibility in darkness. For added contrast, the central running seconds hand is red-tipped so that it can clearly be discerned against the grassy green backdrop. The date complication at 3′, however, is designed to be as subtle as possible – opting for a white on black disc that does a commendable job of blending into the dial. 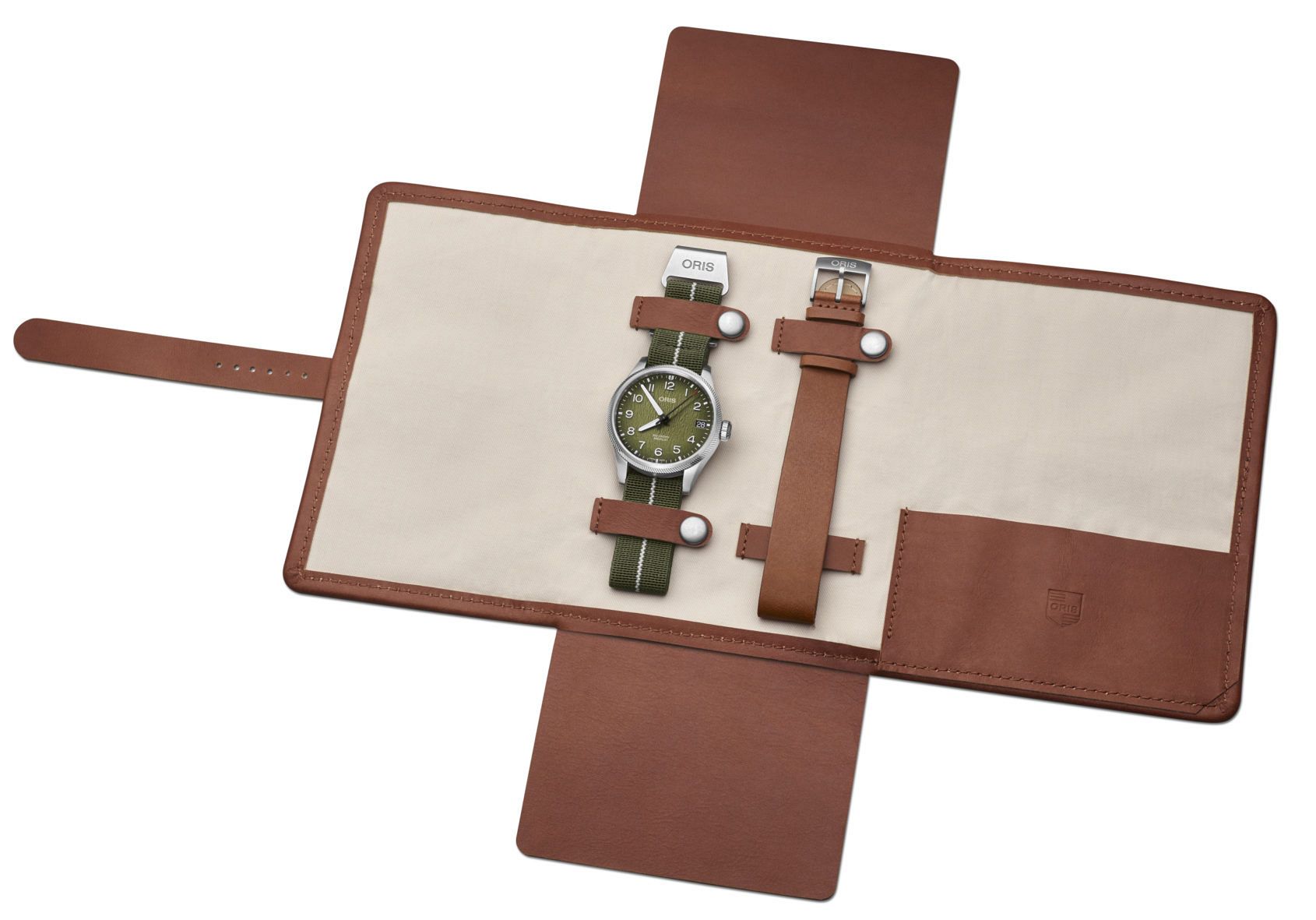 The Oris Okavango Air Rescue Limited Edition is sold with a leather travel pouch that holds the watch and its two bundled straps. The first, and my personal favourite, is the Erika’s Orginals textile strap made exclusively for Oris with an Oris engraved buckle as well. The green/white combo pairs well with the dial, and from personal experience with my own Time+Tide club strap, made by Erika’s Originals as well, it is super comfortable and made to last. The other benefit of an Erika’s Originals strap is that the buckle system is not driven by loopholes – you can fine tune the size to find your perfect fit without the incremental limits. As an added bonus, if you decide to tone down the green a tad you have the option of swapping the textile strap out for a brown leather to switch up the aesthetic. 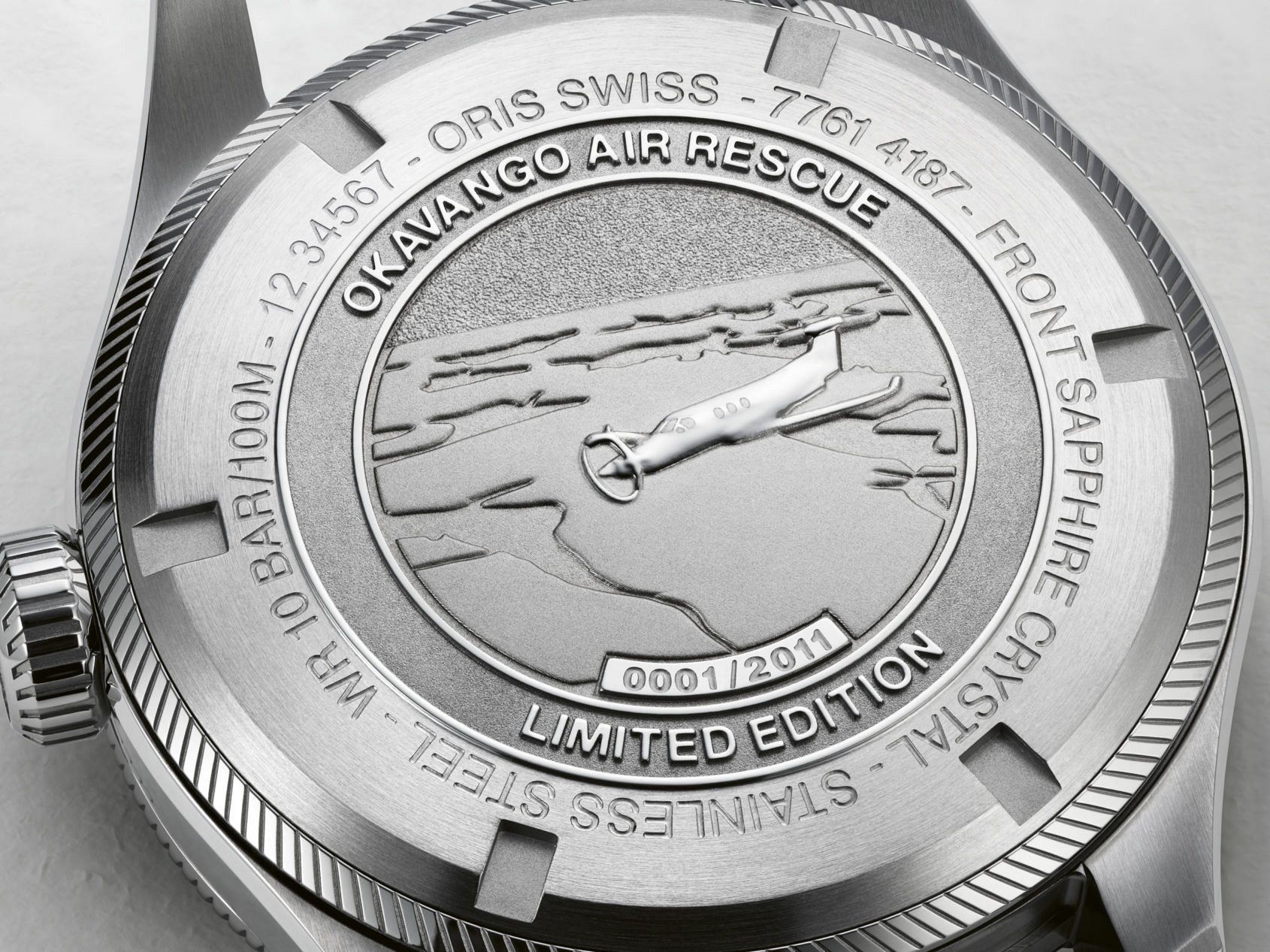 Inside the watch, beneath a solid and commemoratively engraved caseback, is the Oris automatic caliber 751 which is the manufacturer’s take on the Sellita SW220-1. While perhaps not the most glamorous movement, considering what the watch is inspired by it makes sense that a no-nonsense tried and true timekeeper takes on timekeeping responsibilities in the watch. It also keeps the watch at a highly attractive price point as well. The robust 28,800 vph movement has a power reserve of 38 hours, of course extended while worn due to its self-winding rotor. 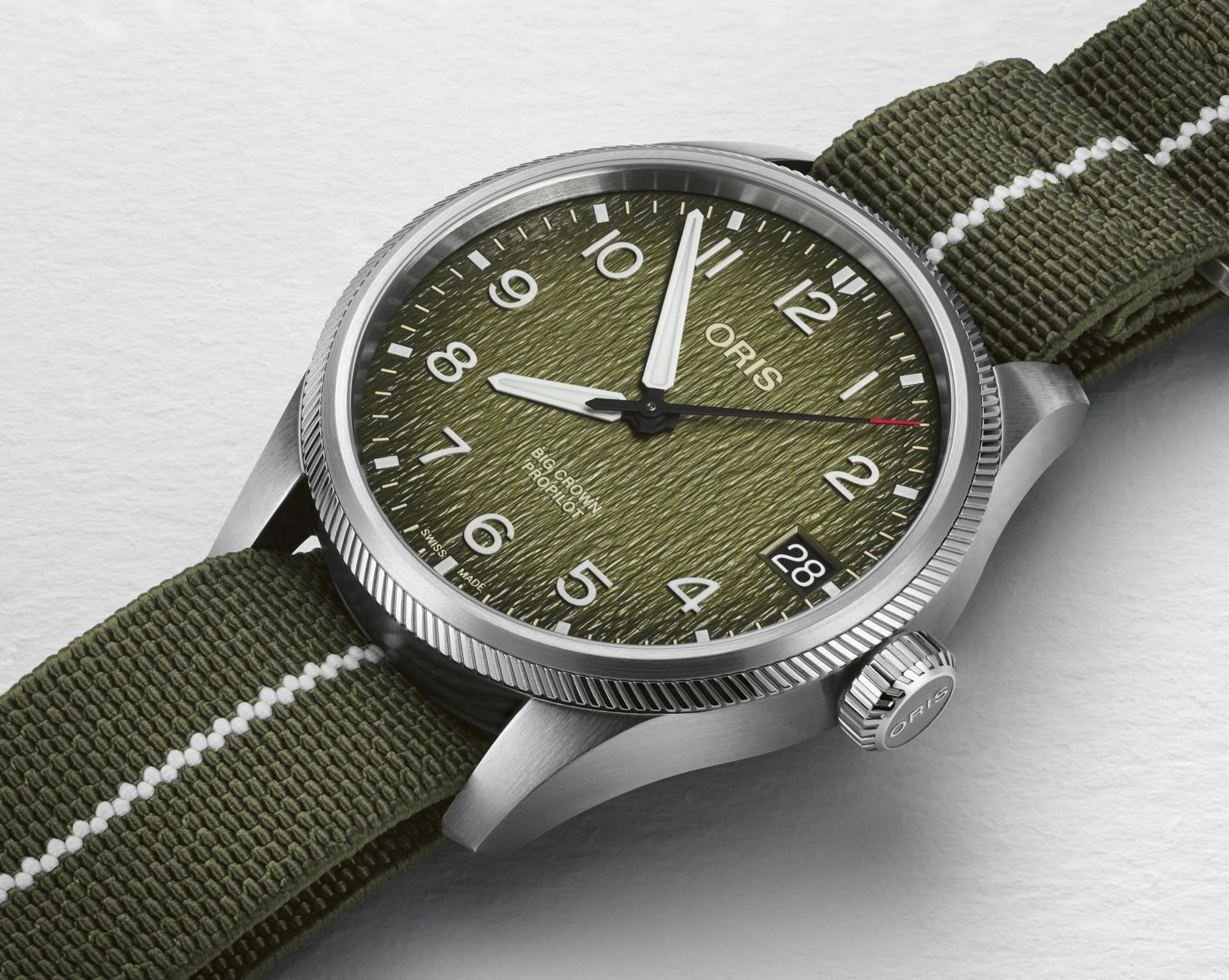 Limited to 2,011 pieces to mark the year the O.A.R. organization was founded, the Oris Okavango Air Rescue Big Crown ProPilot Limited Edition will be available this month. Price: $2,500 USD