Longines have been leading the nostalgia bandwagon for years now. Their Heritage line has been pumping out hit after hit of vintage-inspired reissue models for much longer than most other Swiss juggernauts, one of the most popular being the Avigation BigEye Chronograph. The original BigEye is full of character, even having won the price in the “Revival” category at 2017’s GPHG awards. Now, with many more big-name brands having caught onto the vintage-style hype train, Longines have taken a daring step with their famous BigEye — fusing different retro aesthetics to create something entirely modern, and lavishly cool. 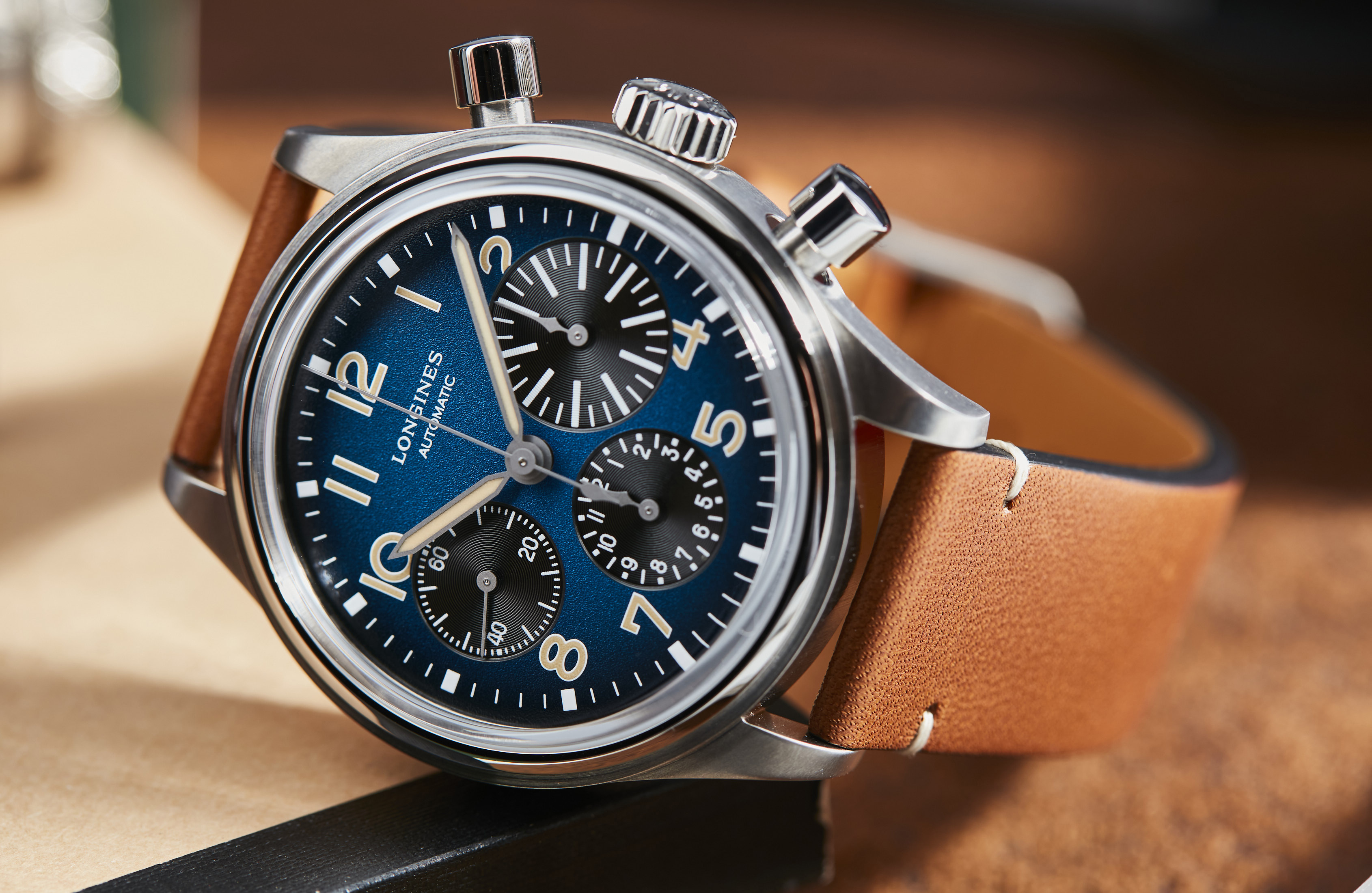 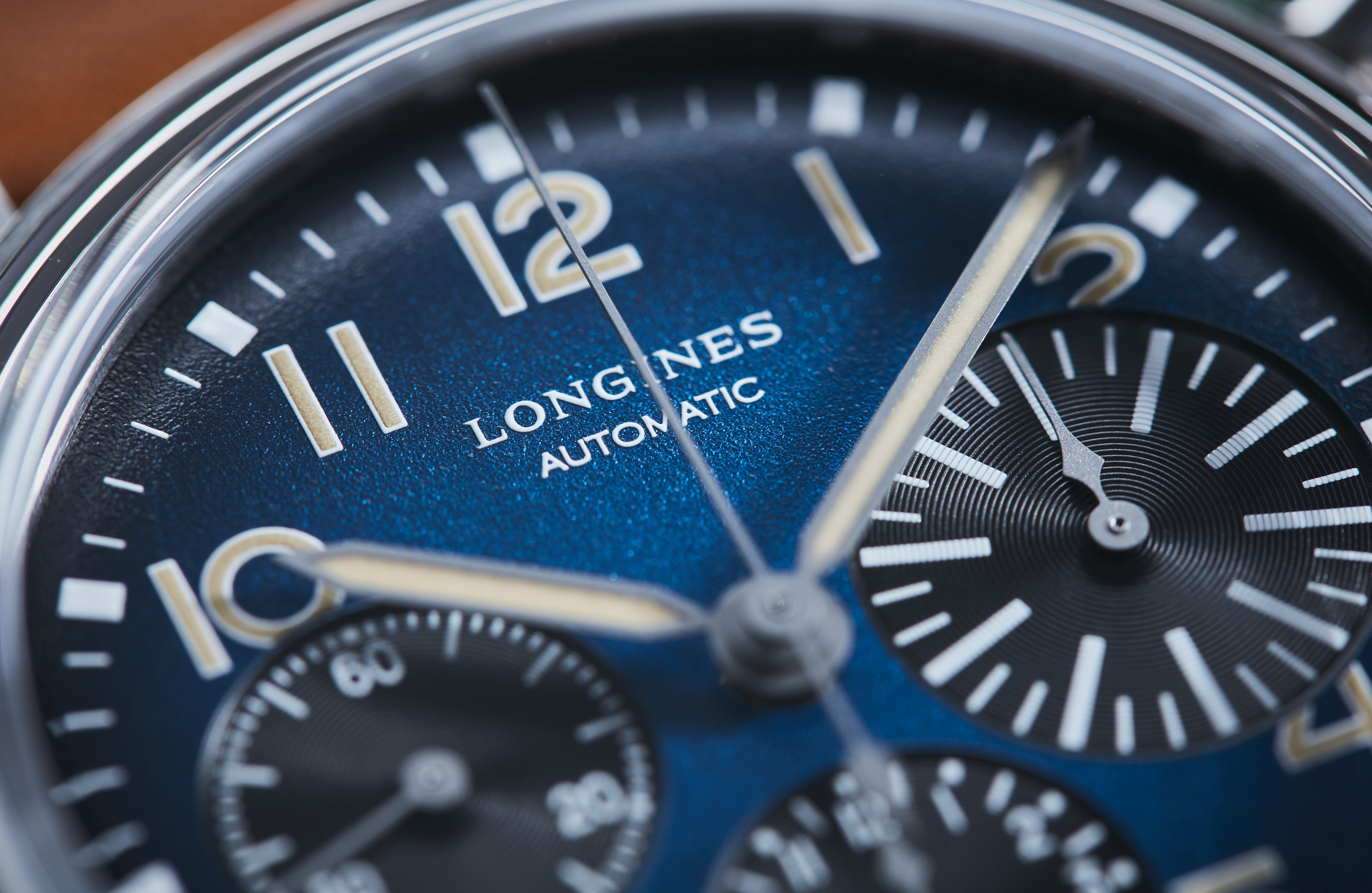 One look at the dial of this Avigation BigEye, and you instantly hear the roar of a Spitfire’s 27-litre supercharged V12 engine zoom past your head. Well, I do at least. The BigEye, still remaining in the Heritage collection, maintains its inherent military roots, with its hallmarks inspired by a period example of a Longines pilot’s watch. The crisp Arabic numerals along with the upscaled dial diameter make this one of the most quickly legible watches I’ve ever handled, knowing exactly what minute it is at a quick glance. 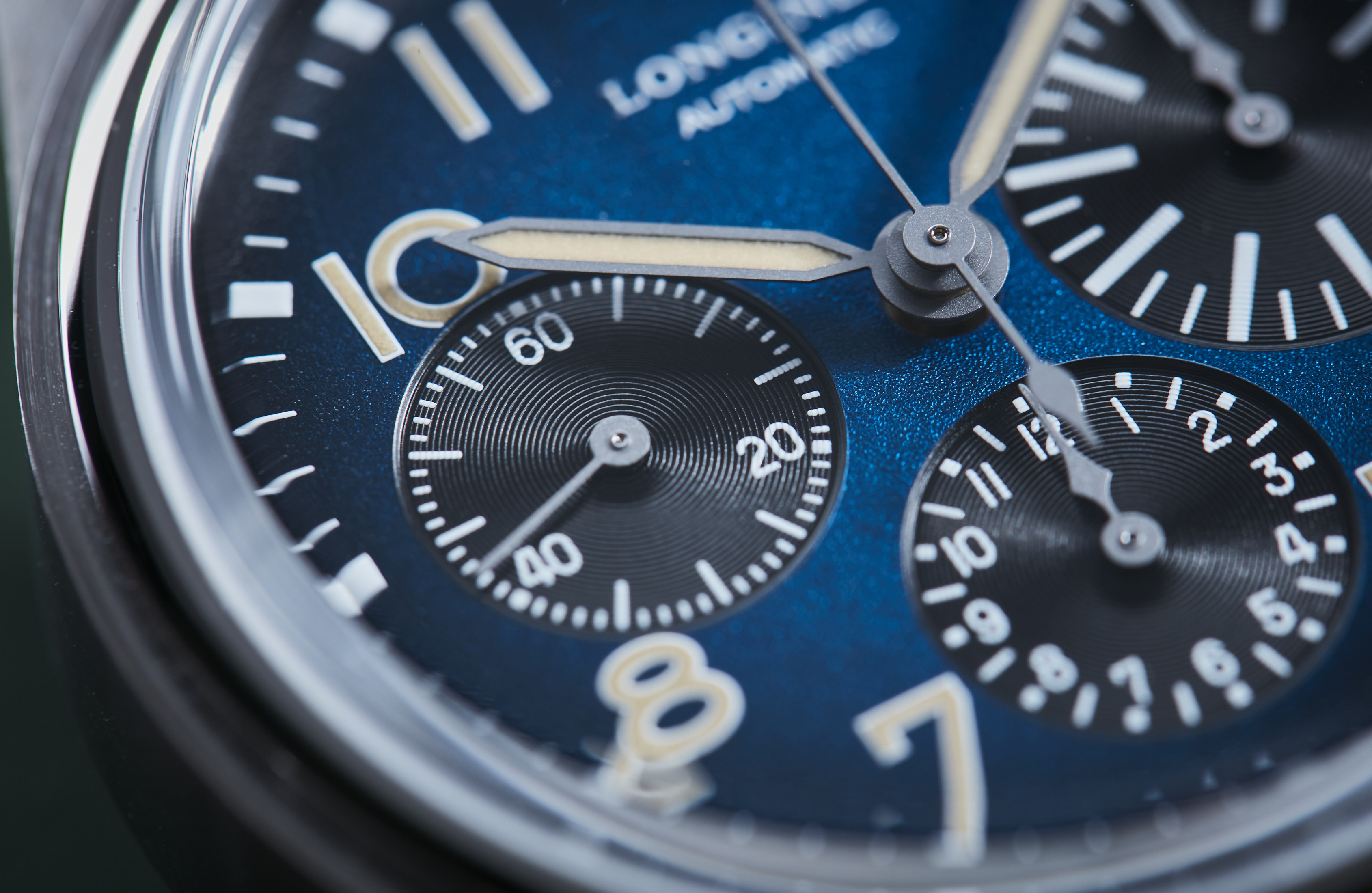 The titular BigEye, a minutes register for the chronograph, is clearly segregated into three-minute intervals, and the aggressive spearhead hand also makes that easier to summarise. All three chronograph subdials are given a neat concentric circle engraving, giving a shimmery sunburst effect as the watch is moving. 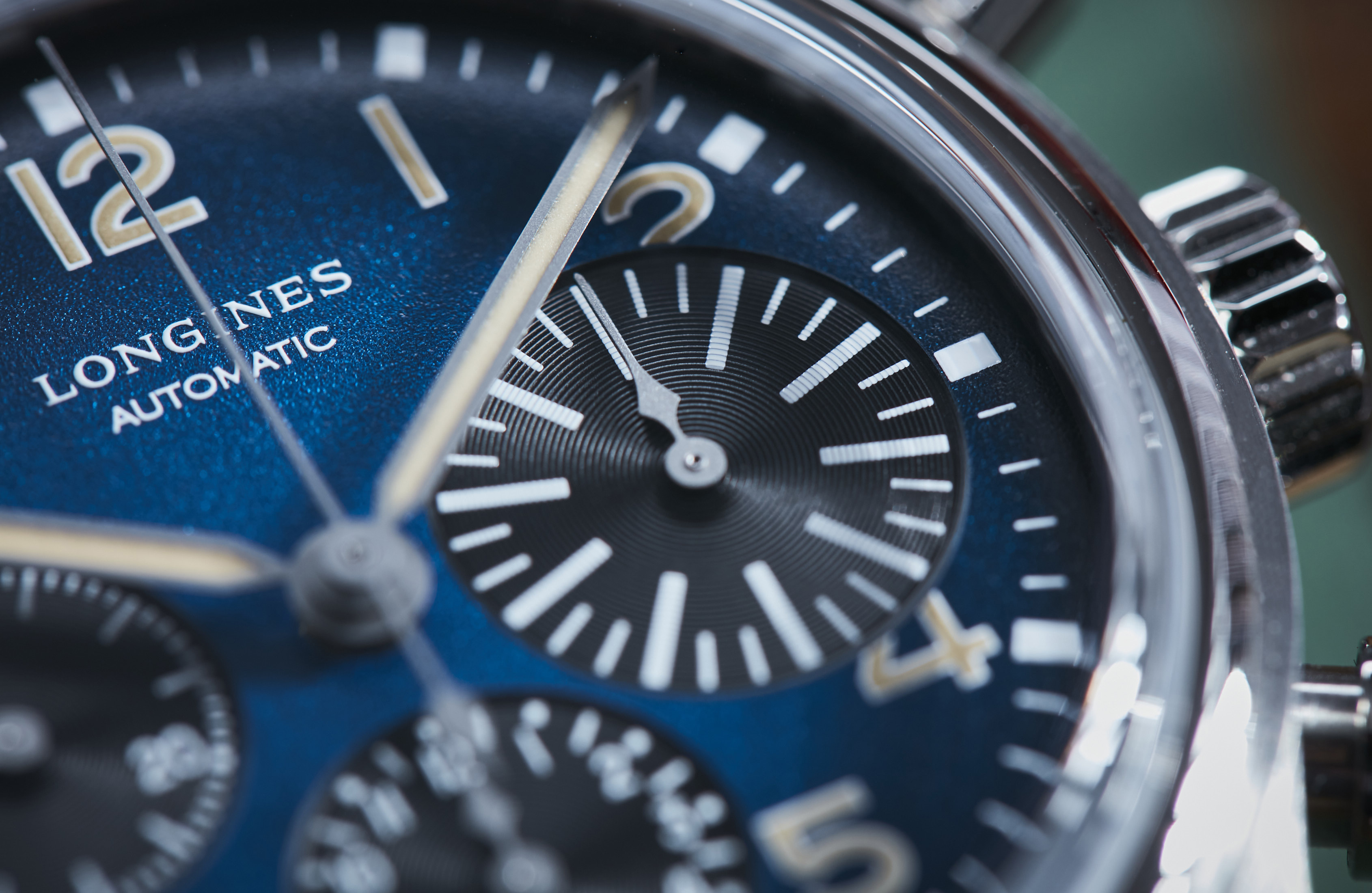 However, the most emotive element of the dial is its ‘Petrol Blue’ dégradé, which runs from black around the minute track and into a blue that remarkably does evoke that of an oil slick, helped by the stippled and grainy texture. The final touch is the old radium coloured SuperLuminova filling the numerals and hands, adding that touch of ‘faux-tina’ to the dial in the day, and glowing that eerie green at night. 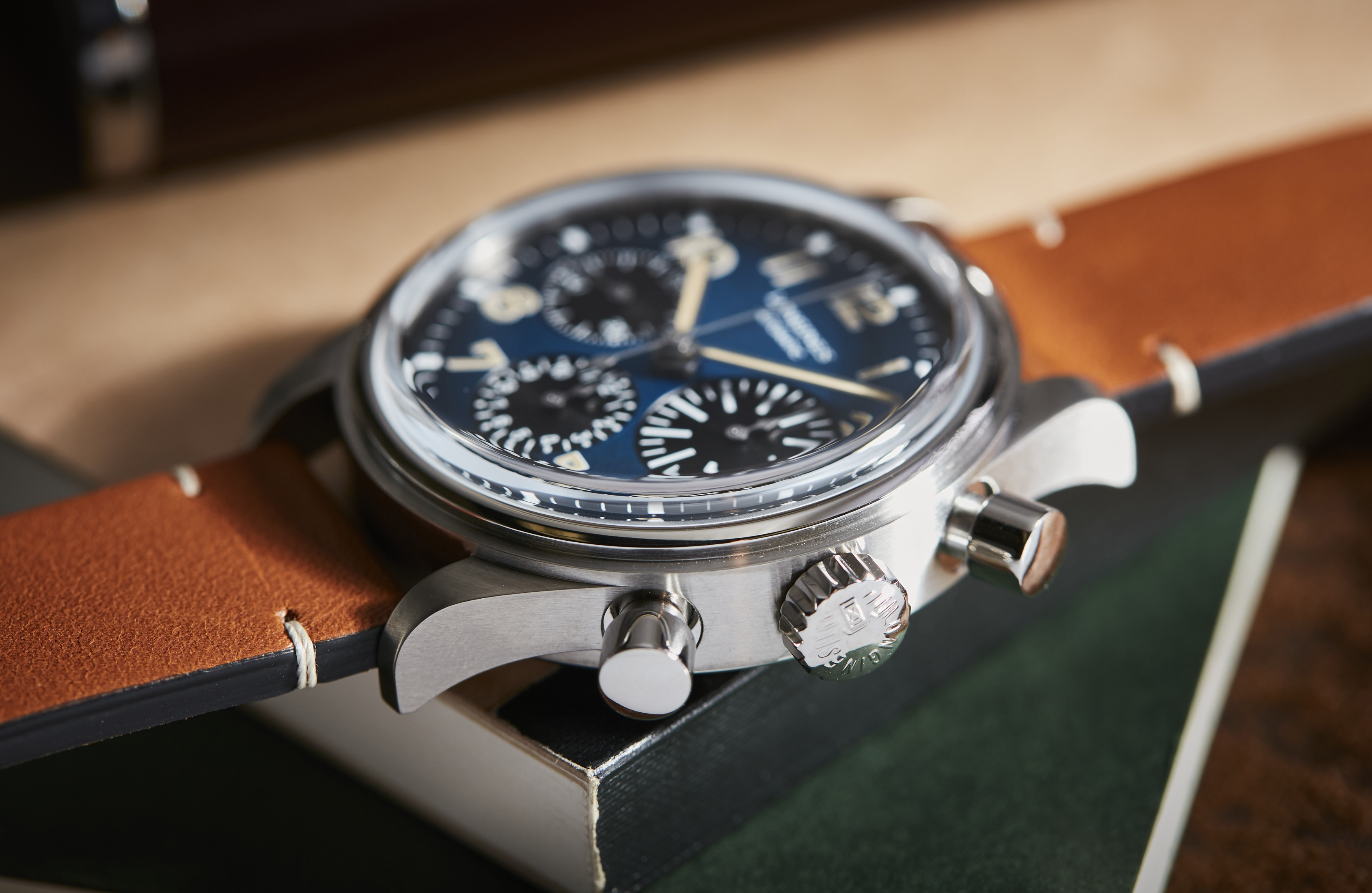 At first glance, the case hasn’t changed from the original Avigation BigEye. It has the same dimensions of 41mm diameter, 20mm lug width, 14.5mm thickness, and 49mm lug-to-lug, but there is a significant change. The case material is now titanium, entirely brushed with the exception of the crown and chronograph pushers. This not only gives the case a slightly darker hue than steel, adding more contrast to the newly colourful dial, but also reduces the weight which is helpful for a larger watch such as this. 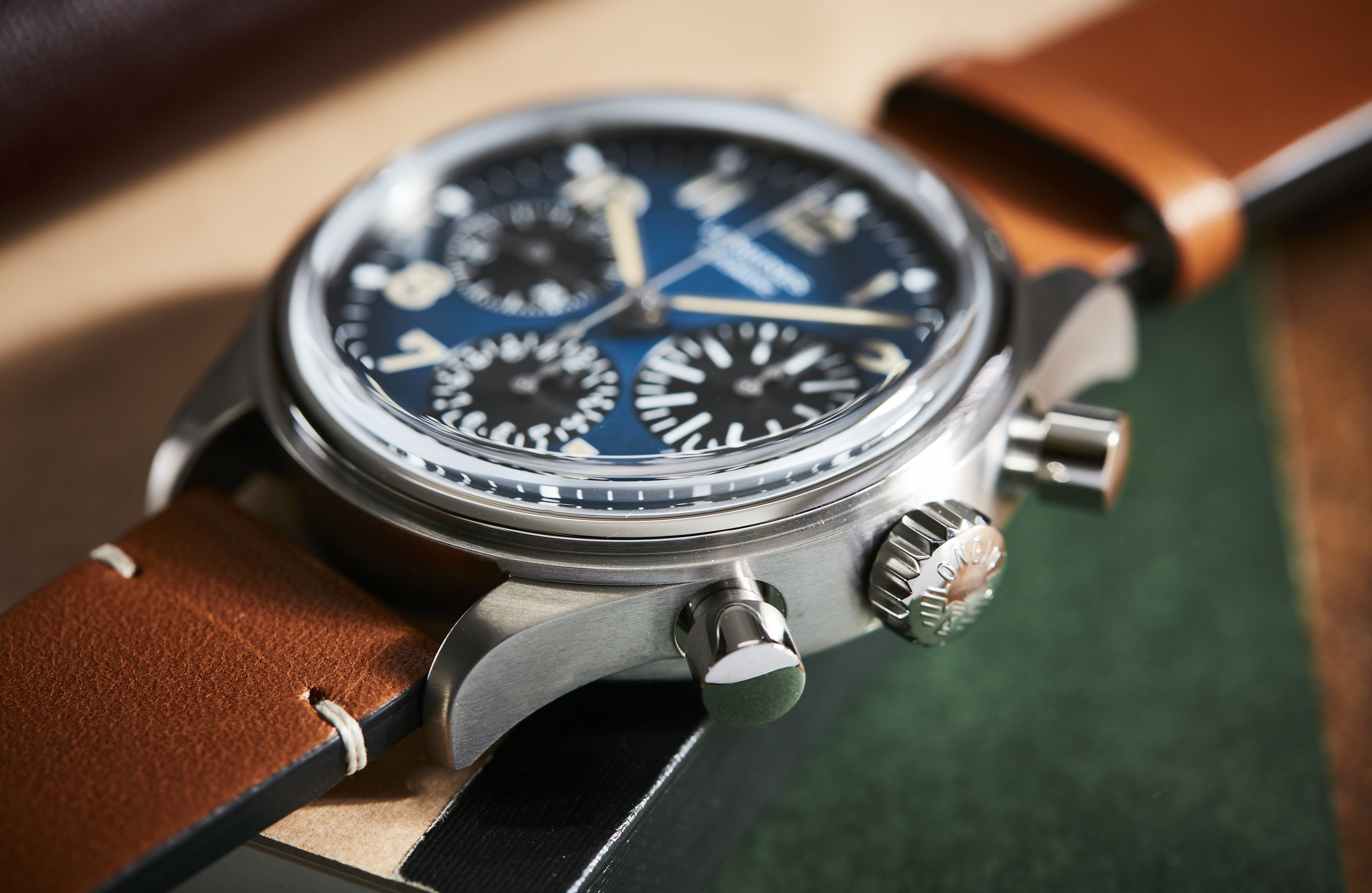 Although 14.5mm thick is large, a decent portion of that is made up from the box-domed sapphire crystal, slimming down it’s overall impression. The lugs do curve slightly, although it certainly doesn’t shy away from appearing as a big watch, as it should given its pilot heritage. The caseback is solid, with a stoic engraving of a plane and the specifications, indicating 30m of water resistance, around it. 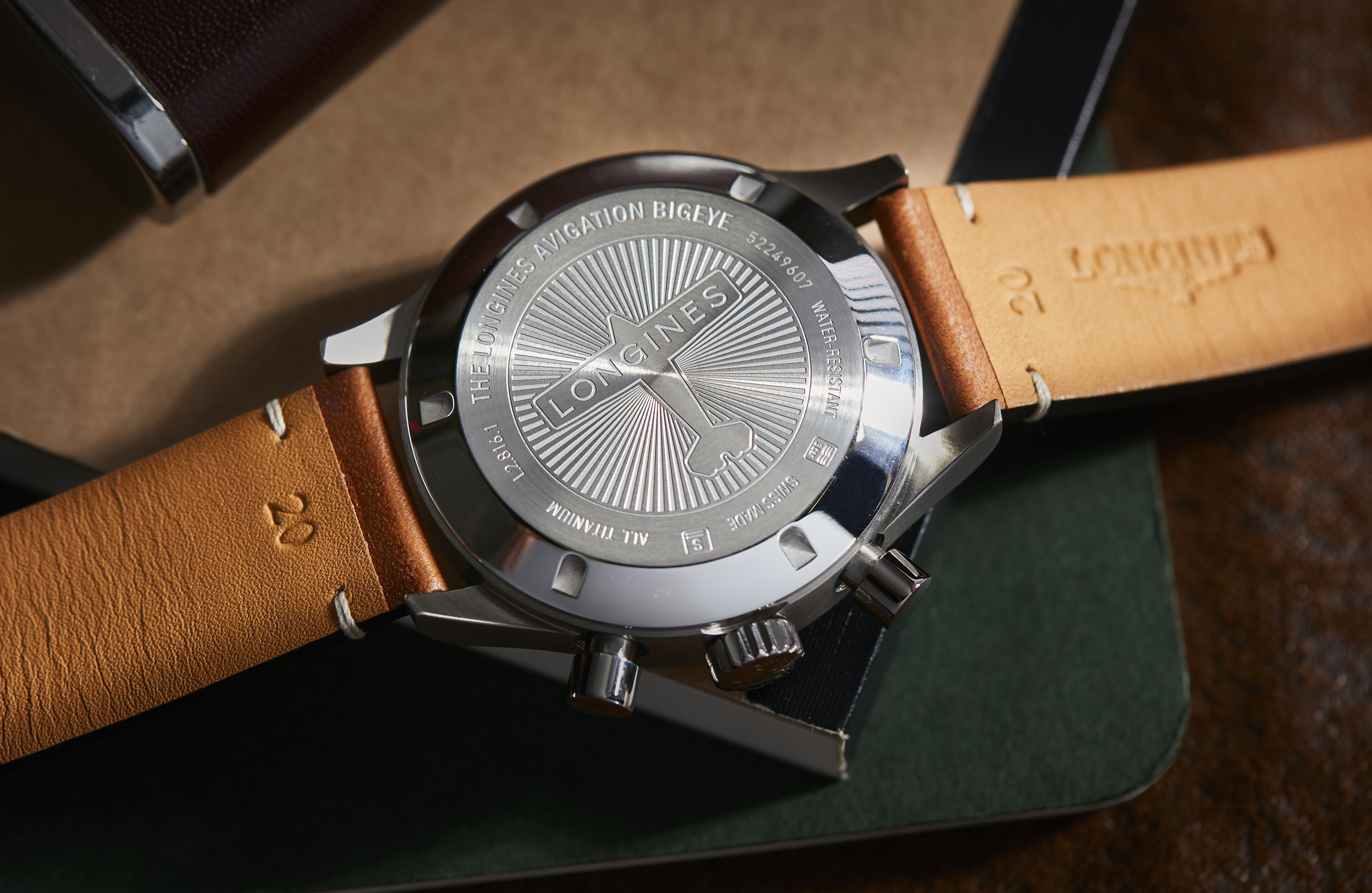 The Avigation BigEye uses the Longines caliber L688, which is an automatic column-wheel chronograph based on the ETA A08.L01. It is almost a shame that the Heritage watch sticks to its traditions of a solid caseback, as the L688 is a beautiful movement. The rotor is covered in Geneva striping, and the plates have a lovely perlage pattern. The column-wheel, which gives the pushers a solid and definite ‘click’, is also heat-blued. It beats at 28,800vph, as expected, has a healthy 54 hours of power reserve, and 27 jewels. One thing to note is its unidirectional winding, so there is opportunity to feel some rotor wobble on the wrist during wear. 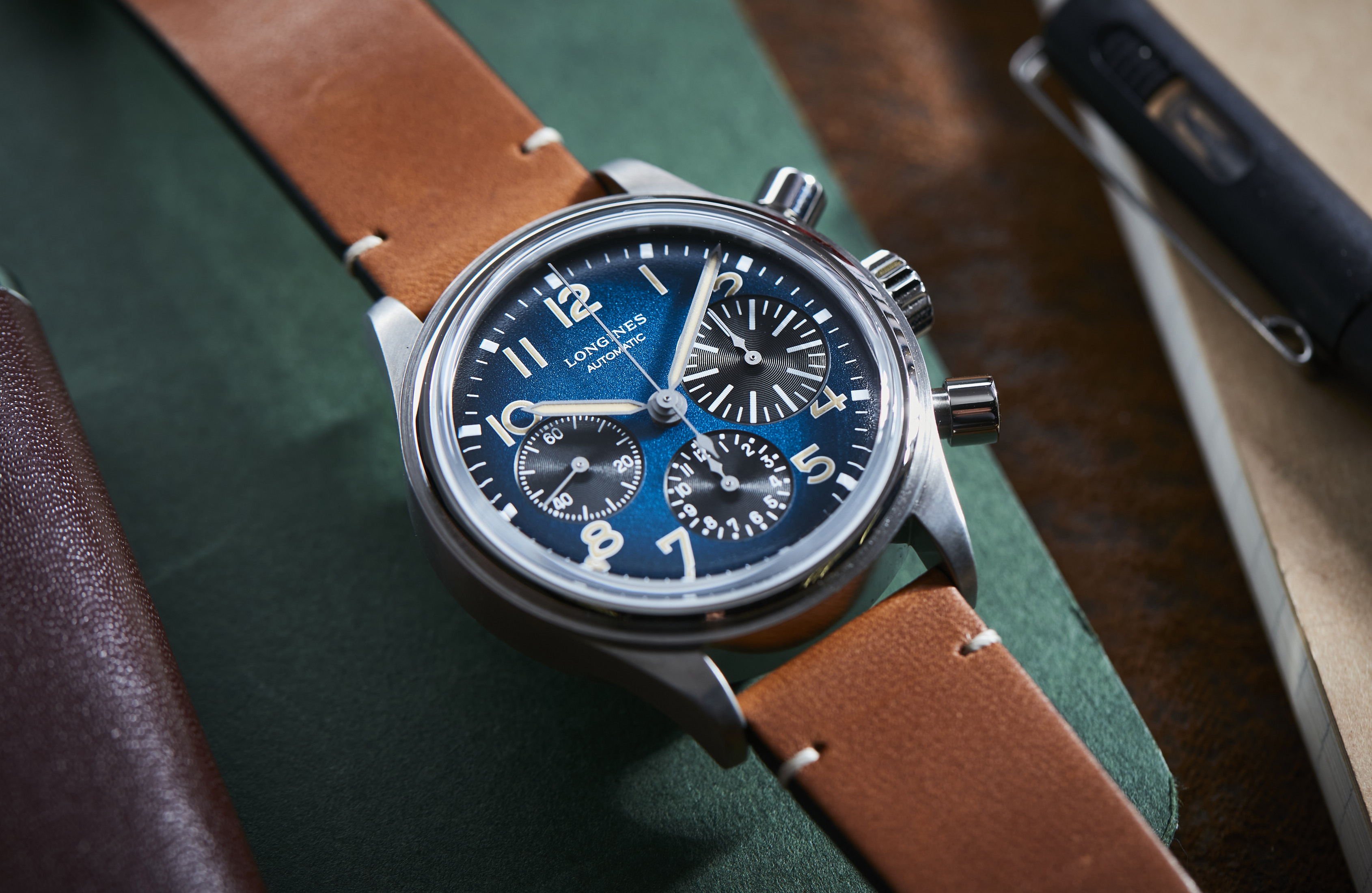 Longines provide a very soft and supple tan leather strap, with vintage-style cross stitching next to the lugs. Its grained texture will age well over time, and with its 20mm width you will find a litany of ways to experiment with accessories. Personally, I think the BigEye always looks incredible on a variety of striped NATO straps, and also aftermarket mesh or Milanese bracelets. It’s also worth mentioning the Longines box that the watch comes in, which is an absolute behemoth. The inner box measures 9”x 9”x 5”, and has a genuine walnut exterior, sealed with a dark brown leather strap, while the outer box includes compartments for the warranty book and a booklet outlining key releases in the Heritage range, as well as the stories behind them. 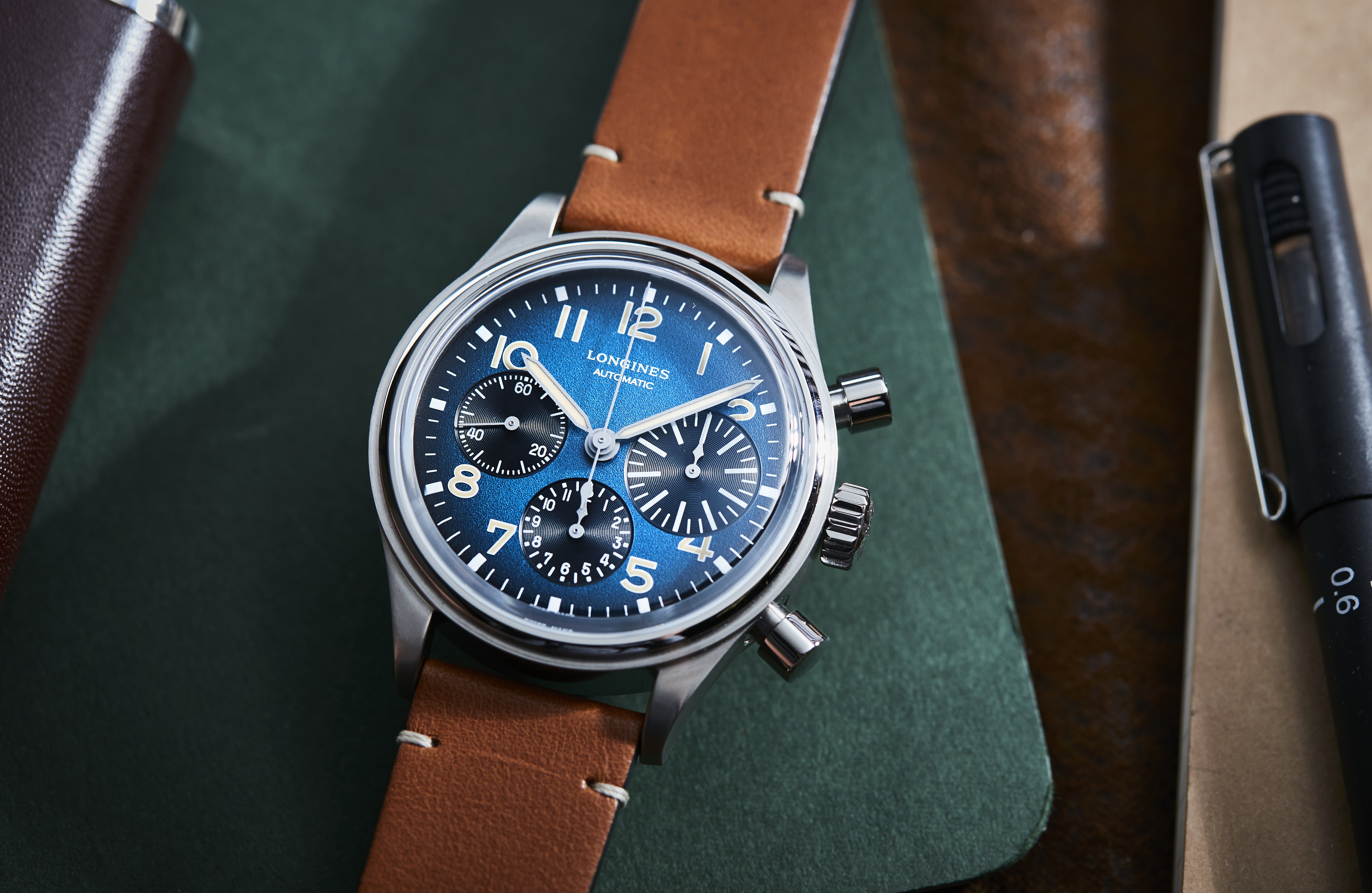 For $5125AUD, it is hard to call this watch a bargain, but it does absolutely offer value for its price. The quality of the materials and finishing is as good as you could possibly ask for, with a stunning take on the already iconic design. While it does cost $1125AUD more than the original BigEye in black and steel, the colour scheme is also much more of a conversation starter, so your own priorities should be taken into account when assessing the purchase. 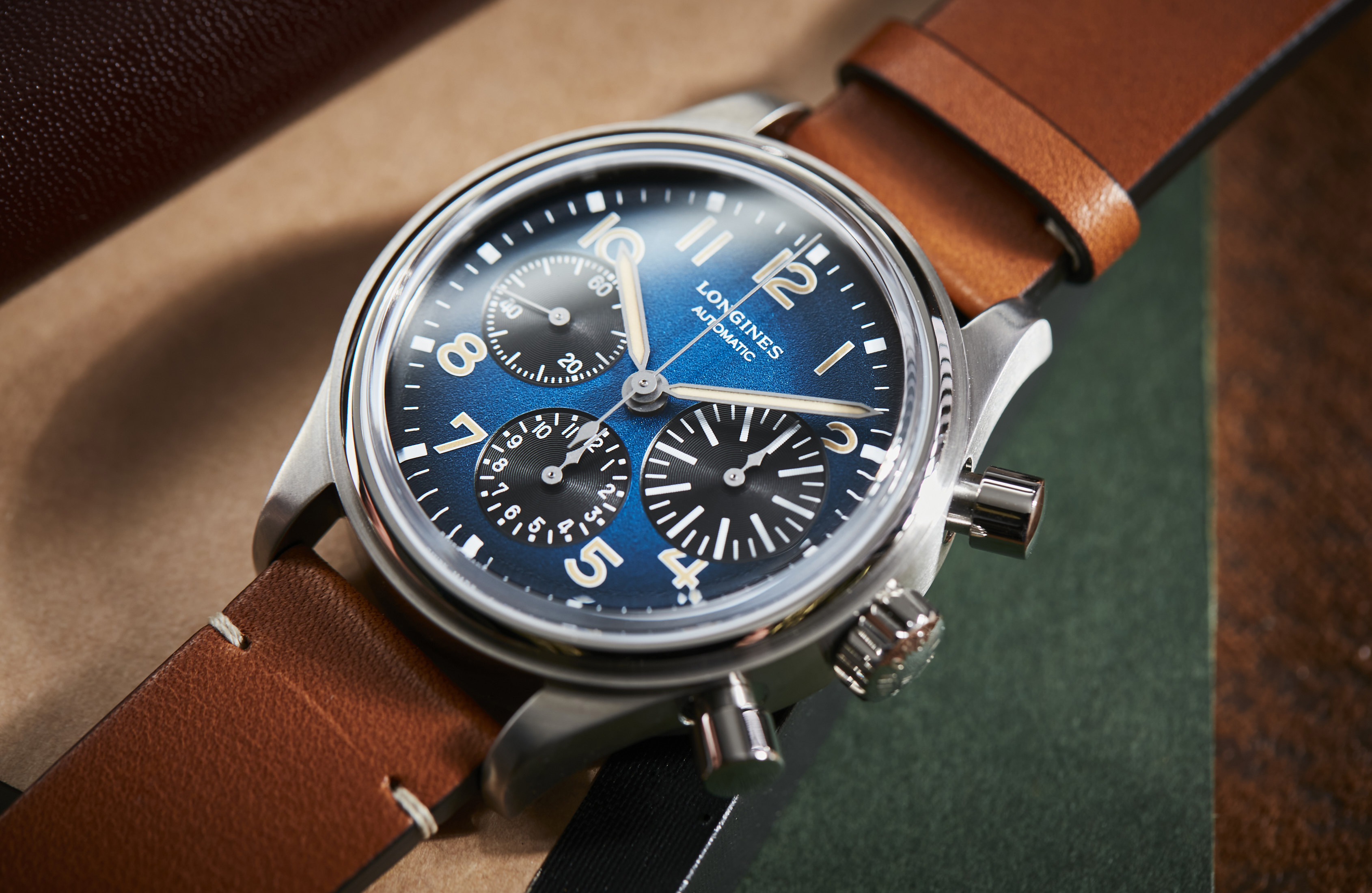