EDITOR’S NOTE: At Time+Tide we don’t like safe queens. Instead we believe that watches are meant to be worn and enjoyed in the cut and thrust of a full-contact lifestyle. Which is why we love the French tennis player Gael Monfils. Rather than baby this Greubel Forsey GMT Sport worth $500,000, see what happens when he puts it through a stress test of savage ferocity.

Gael Monfils, previously an ambassador for De Bethune from 2014-2017, is a known collector of watches – having gone so far as to create a dedicated Instagram @myson.watches with some pretty tasty watch content. 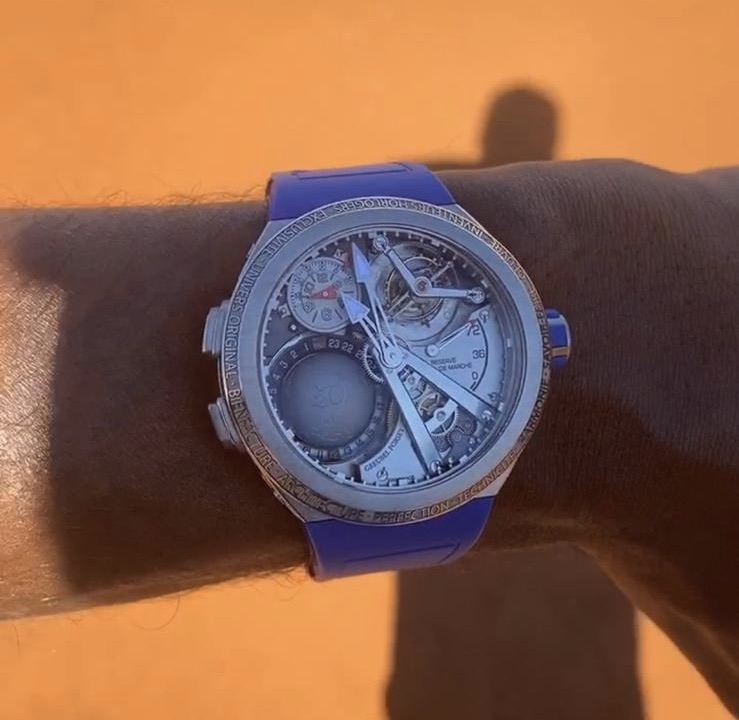 He has even held an Instagram live chat, for those lucky enough to speak French, with fellow top tennis player Stanislas Wawrinka about watches they love to see and wear. This weekend, however, Gael posted a killer series of videos Instagram Stories field testing the Limited Edition Greubel Forsey GMT Sport (released in late 2019 and more than twice as expensive as their newly released Balancier S). Whether a fan of tennis, watches, or both, you will surely appreciate the footage he shared. 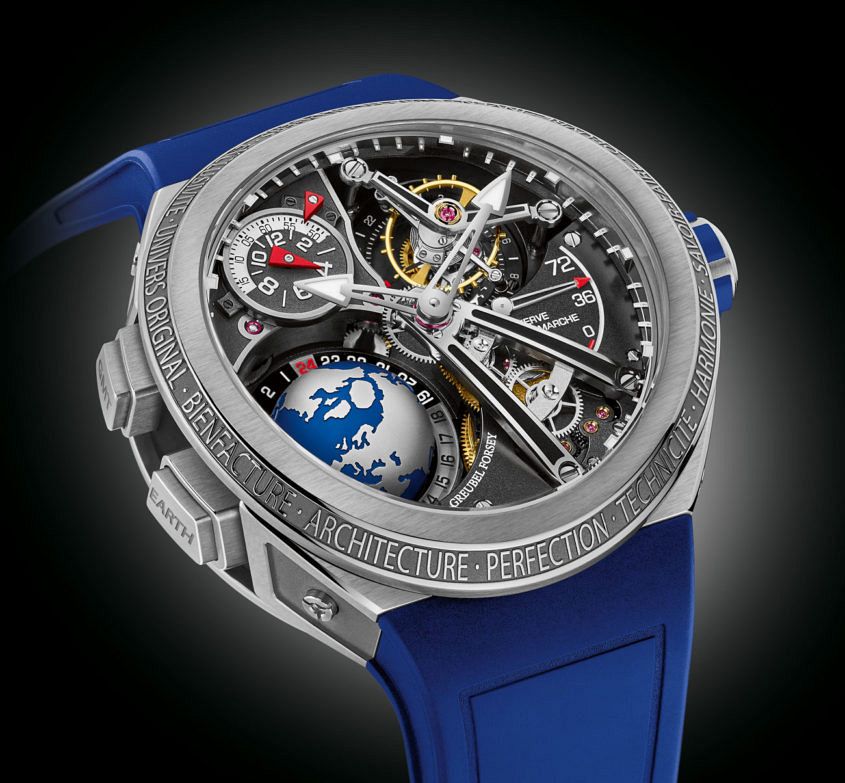 Before we jump into the play-by-play of the field test, let’s briefly recap the Greubel Forsey GMT Sport. The GMT Sport was GF’s first foray into sports watches. Pairing a previously existing movement in a highly robust 45mm titanium case, Greubel Forsey created arguably the most complicated sports watch ever made. The watch features a second time zone, rotating globe (with universal time and day-and-night indicators), universal time on 24 time zones, summer and winter time, cities observing summer time, pushers to control the GMT and Earth display, a 24-second Tourbillon, and power reserve along with the hours, minutes, and small seconds display.

With such a high level of complication and cost, you would be hard pressed to test the waters or, in this case, tennis court with this 100-metre water resistant titanium piece of haute horology. Especially when only 11 or so were made. In the wake of the recently released and less complicated Balancier S, it’s clear that Greubel Forsey and Gael Monfils were eager to test its metal on the court. 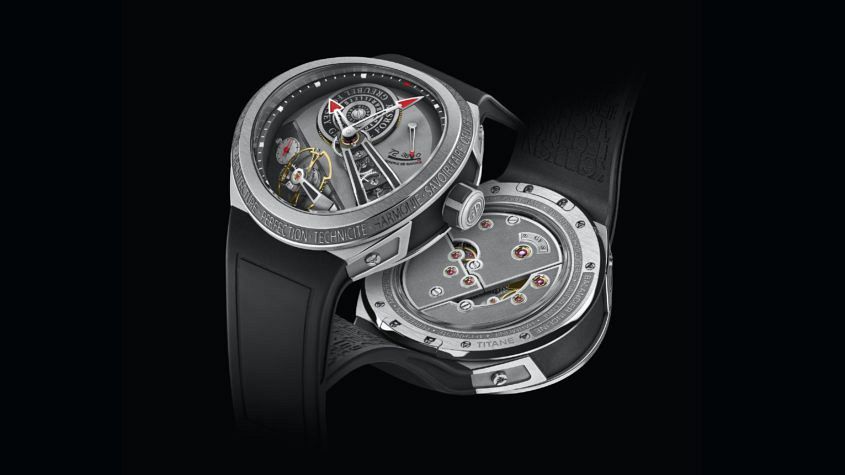 To start off, Gael practiced as he would normally on a clay surface, which is famously found on the courts of Roland Garros for the French Open (in Paris where Gael was born). For those who have not had the pleasure of watching Gael play, he can be routinely found putting his body on the line during his matches. One of the most exciting players to watch, he famously dives, lunges and slides into splits, in attempts to keep the ball in play. If anyone could give a proper stress test to a watch on the court, it’s Gael. 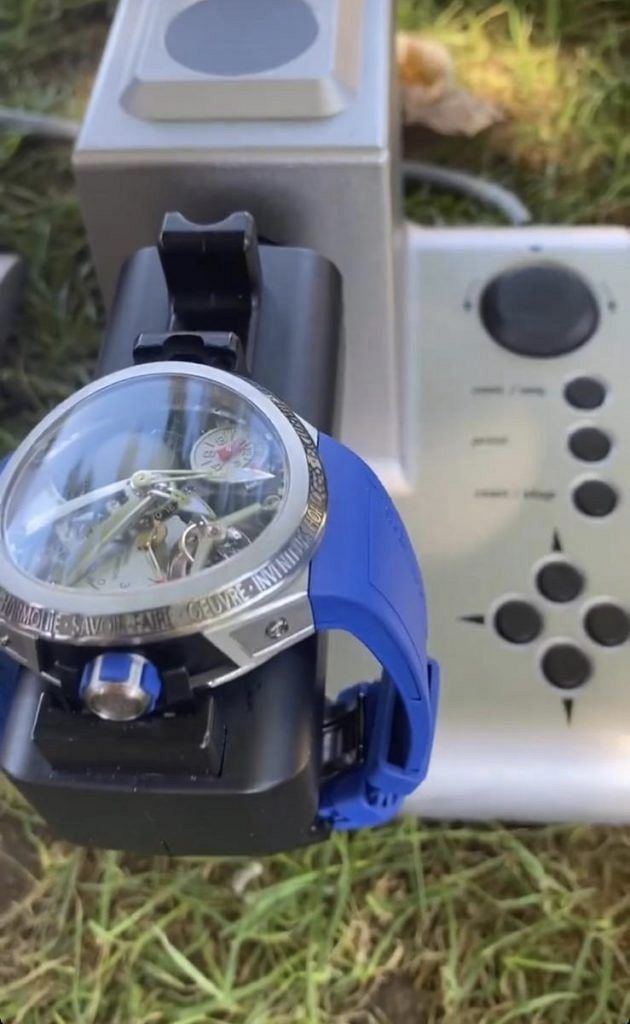 After 37 minutes of rigorous practice, in the footage you’ll hear Gael explain the watch is holding up to its Sport nomenclature, ticking away in totally functioning condition with his arm covered in sweat and clay. Considering Gael previously held a long-standing record for the fastest forehand, at 190kmh, or 118 mph for those of us in the United States, it is fair to say the watch even during casual ground strokes is being put to the test. Speaking of tests, the watch was some time after placed on a timing machine to confirm the watch was not only running, but also keeping within their chronometric standard. Once it passed the timing machine, Greubel Forsey and Gael Monfils decided to kick it up a notch – Gael would serve a ball at full speed at the dial of the $500,000 USD watch. Yes, you read that right.

So just how fast is Gael’s serve? While records are not kept by the ATP themselves, based on data found online Gael, on average, hits his serve at a quick pace of 196 kmh, or 122 mph, which puts him ahead of Richard Mille ambassador Rafael Nadal at 187 kmh/116 mph and behind the second RM ambassador Alexander Zverev at 224 kmh/139 mph in regard to average serving speed. However, Gael has hit a maximum serve speed of a staggering 235 kmh (146 mph) during his match with Marat Safin back in 2007 – placing him tied for 9th place in the fastest serves of all-time. Clearly, Gael can bring the heat.

While it is not shown how many attempts it took to hit the watch (a small target considering it is 45mm across), the watch can be seen fastened around a tennis ball resting in the service box – taking a direct hit to the crystal and sending the watch flying across the clay court.

If once wasn’t enough, from a different angle it appears it was done a second time with the watch sandwiched between two tennis balls – ensuring this was no magic trick. From the first angle of footage, you can actually hear the audible gasps from onlookers watching the watch take a full-speed serve head on. Astoundingly, Gael puts the watch back on to find it is still ticking away and fully intact.

As his Instagram Story comes to a close, he smartly recommends people do not try this at home – which isn’t really a hard ask, considering most of us do not have a tennis court in our backyard … no less a spare $500,000 USD set aside for a watch. That being said, it’s cool to know you could.