Vertex is a brand with a wonderful history. Founded in 1916 by Claude Lyons, the brand produced watches for Allied troops in the Second World War, following the specifications of the British Ministry of Defence, alongside 11 other brands (a group of manufacturers now known by collectors as the Dirty Dozen). The brand continued to produce watches in the post-war years, until Vertex was forced to close its doors in February 1972, due to the quartz era which wreaked havoc on the watch industry. The brand remained the subject of history books until 43 years later, in 2015, when Don Cochrane, the great-grandson of Claude Lyons, revived the brand and produced their first watch in 2016. This watch was the M100, which was directly inspired by the Cal 59 watch that Vertex had produced for the military in 1944. The second watch to come out of the second-coming of the brand was the Vertex MP45 chronograph. A monopusher chronograph with similar links to military timepieces from the middle of the last century, it was a watch that James (@twentysix____) was so enamoured with, he bought it. 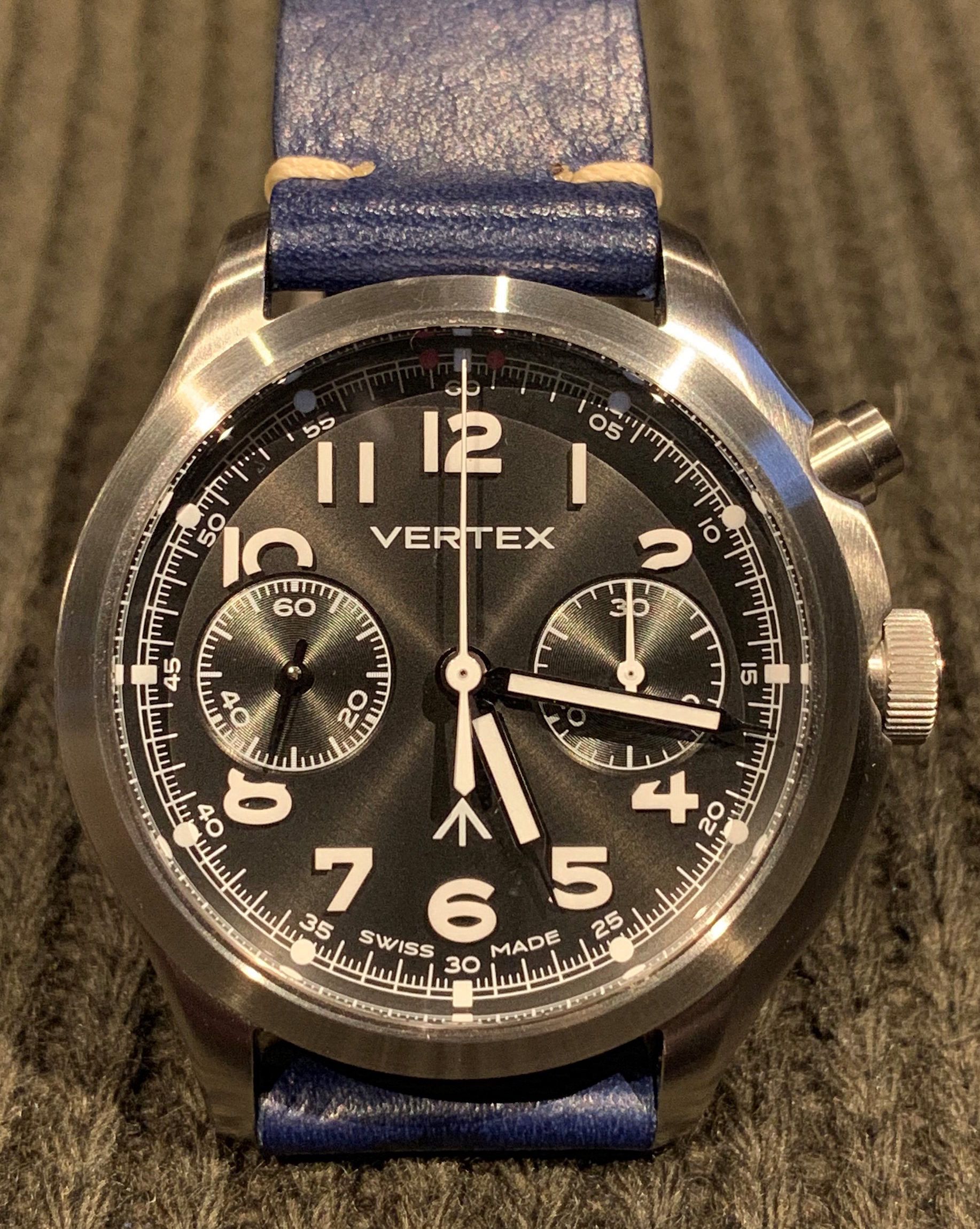 Military watches have always held a special place in my watch collection. There’s something beautiful about how these watches were designed and built to provide the functionality for a specific purpose. I also have fascination with British wristwatches and find the history of the British watch industry of the early to mid 20th century very interesting. Vertex watches are, of course, famous for being one of the 12 watch companies commissioned by the MoD to create a wristwatch to a strict standard, or specification. These have now become known as the ‘Dirty Dozen’, with Vertex being the only British company to provide a watch to the MoD contract. I first read about the Vertex M100 and of Don Cochrane a few years ago, whilst browsing the internet. I read how Claude Lyons — the founder of Dreadnaught and Vertex watches — was actually Don’s great-grandfather, and the wonderful story on how he wanted to continue the Vertex name. Unfortunately, however, I didn’t know anyone who was able to assist me in purchasing an M100 (if you don’t know the story, look it up), so I kept up with all the Vertex news via their website to see what was to come in the future … 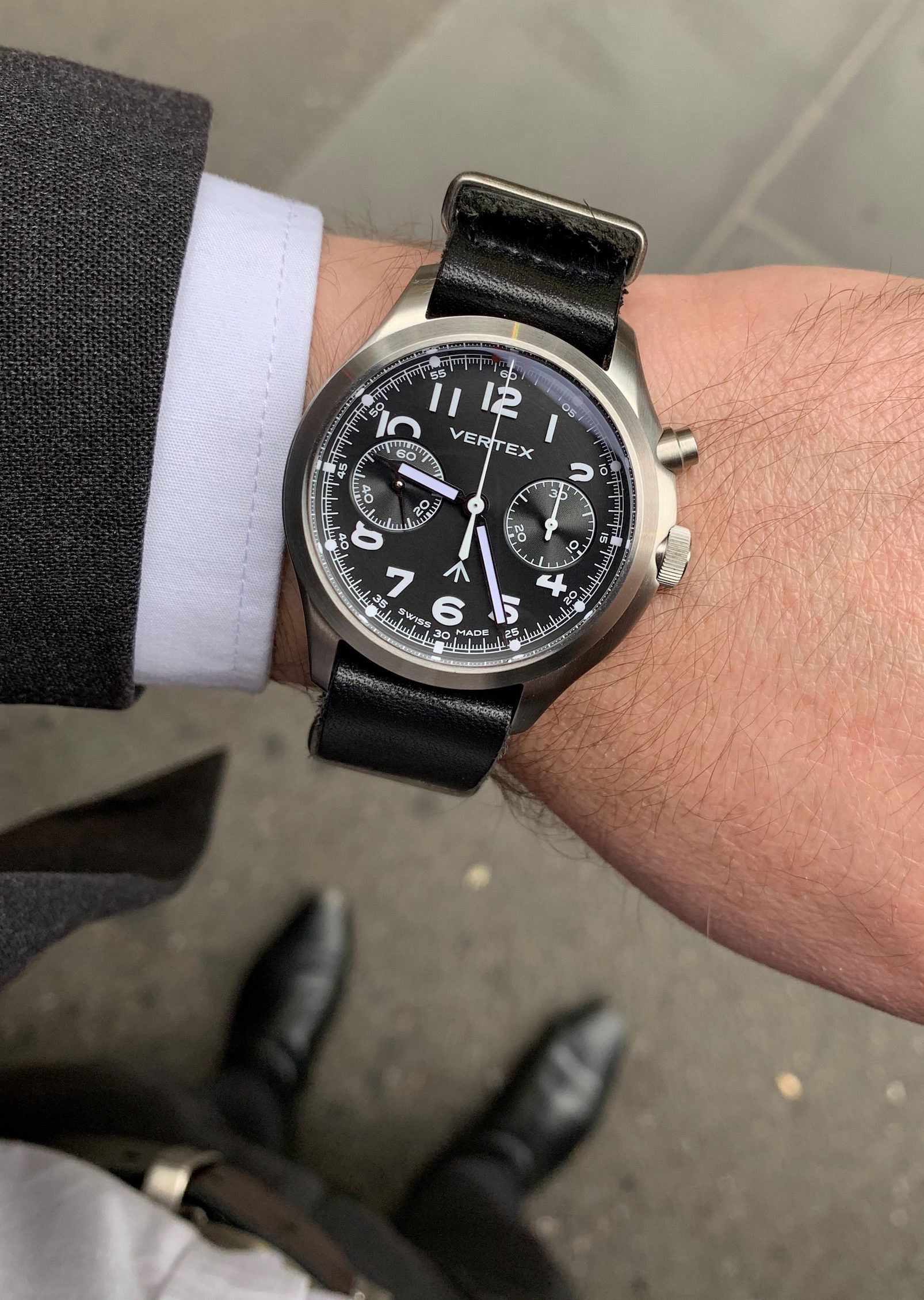 Well, the future was very exciting for me. Vertex’s newest release was to be the MP45 – a watch that I had wished to be released in a modern variant for many years. As stated before, I like military watches, especially the Smiths W10 and the Lemania 6BB. These two watches are perfect in every way. For me, perhaps one of the greatest watch designs of all time is the Lemania 6BB’s asymmetrical case, with its fat lip protruding from the crown side. Interestingly, there is a link between Vertex and Lemania – especially with the design of the Monopusher. In 1945 Vertex was commissioned to make a monopusher chronograph wristwatch by the Admiralty Hydrographic Department within the MoD. The Vertex ledger of that year had described this watch as an ‘Ordinance Timing Watch’. However, the watch was designed but never actually made it into production – at least not by Vertex. As the hostilities in Europe ended and a rationing on imported watch movements from Switzerland to the UK began, Vertex was not able to produce the amount of watches that the MoD required. The project was then handed over to one of Vertex’s watch partners – Lemania in Switzerland, who, as we know, went on to produce these models as the HS9, with the beautiful 6BB following a few years later. The design and history of the MP45 made it a must-buy for me. 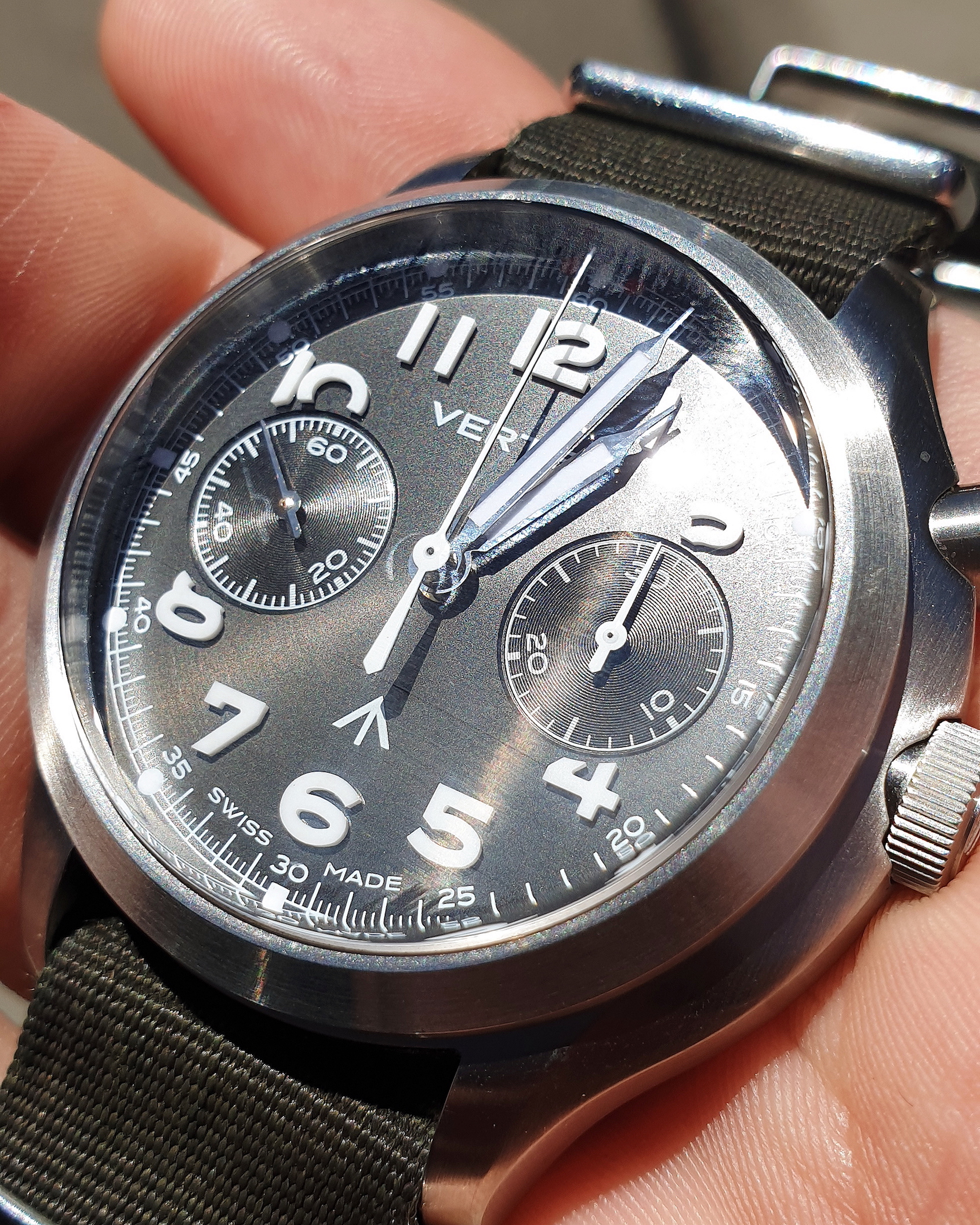 After a few emails to and from the owner of Vertex, Don Cochrane, I was very much taken with his vision for Vertex and as to why he chose to make the MP45. Throw in my love for the asymmetrical monopusher case and a bit of history, then this was pretty much a perfect wristwatch for me. Unfortunately, I was unable to try one on before purchase, but Don was very specific in his answers to my questions and gave me enough information that I felt comfortable with the purchase. 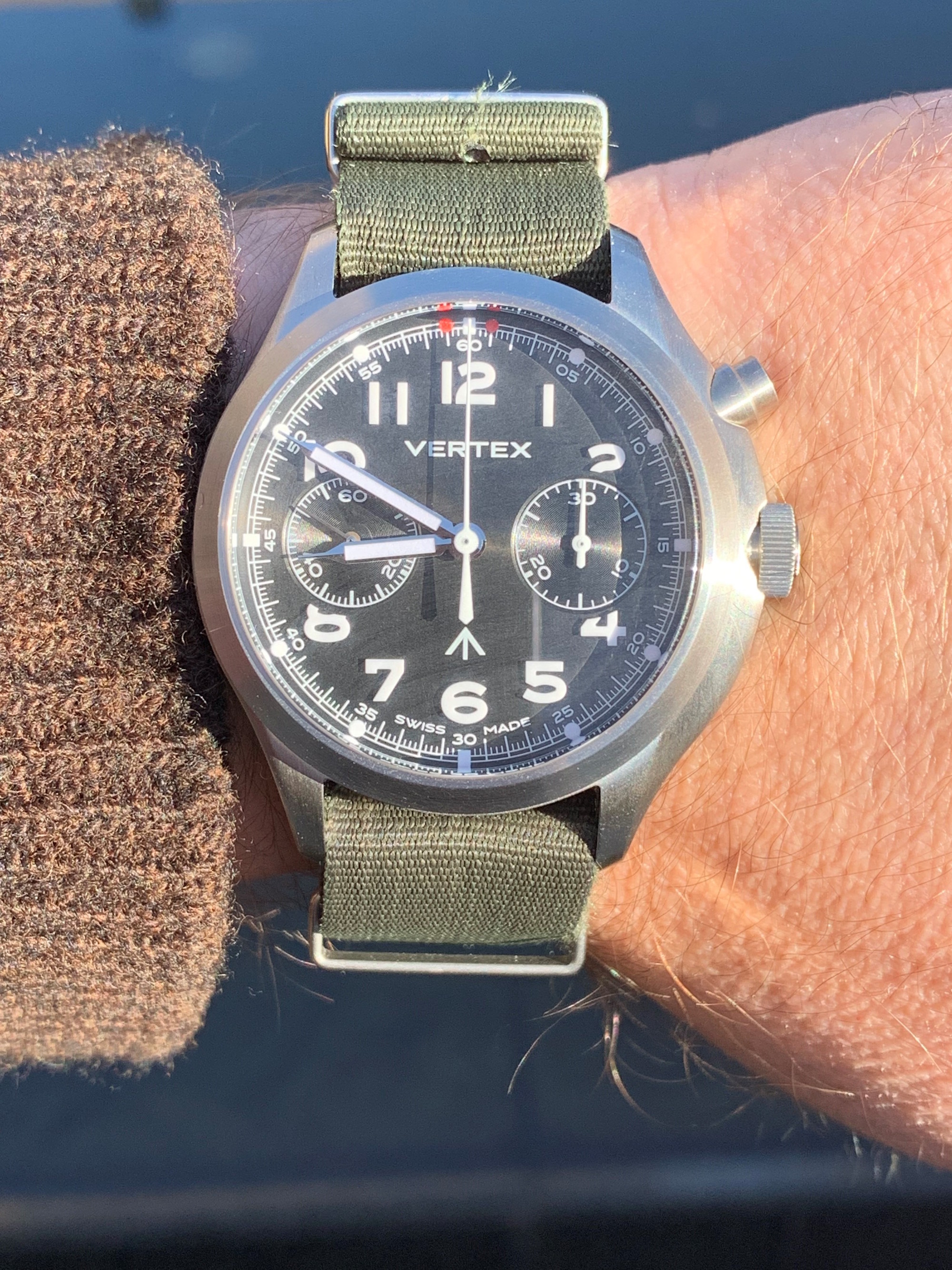 My first surprise was at just how well built this watch is. The MP45 feels like a top-quality product and it can handle absolutely anything! My second surprise is all the little design elements that pop out over time. It’s a beautiful watch, but it becomes even more beautiful every time I look at it. Every little detail is truly amazing. From the double red dots above the 12 o’clock hour marker, the moulded numerals, the colour of the dial, to the finish on the chronograph sub-dials, each element is very well executed. However, my favourite design element is the double Vertex ‘V’ in the ‘W’ of Swiss Made. Flip the watch over and you can see the rather lovely Sellita 510MP movement, which is decorated perfectly. The MP45 is a watch that keeps me smiling! 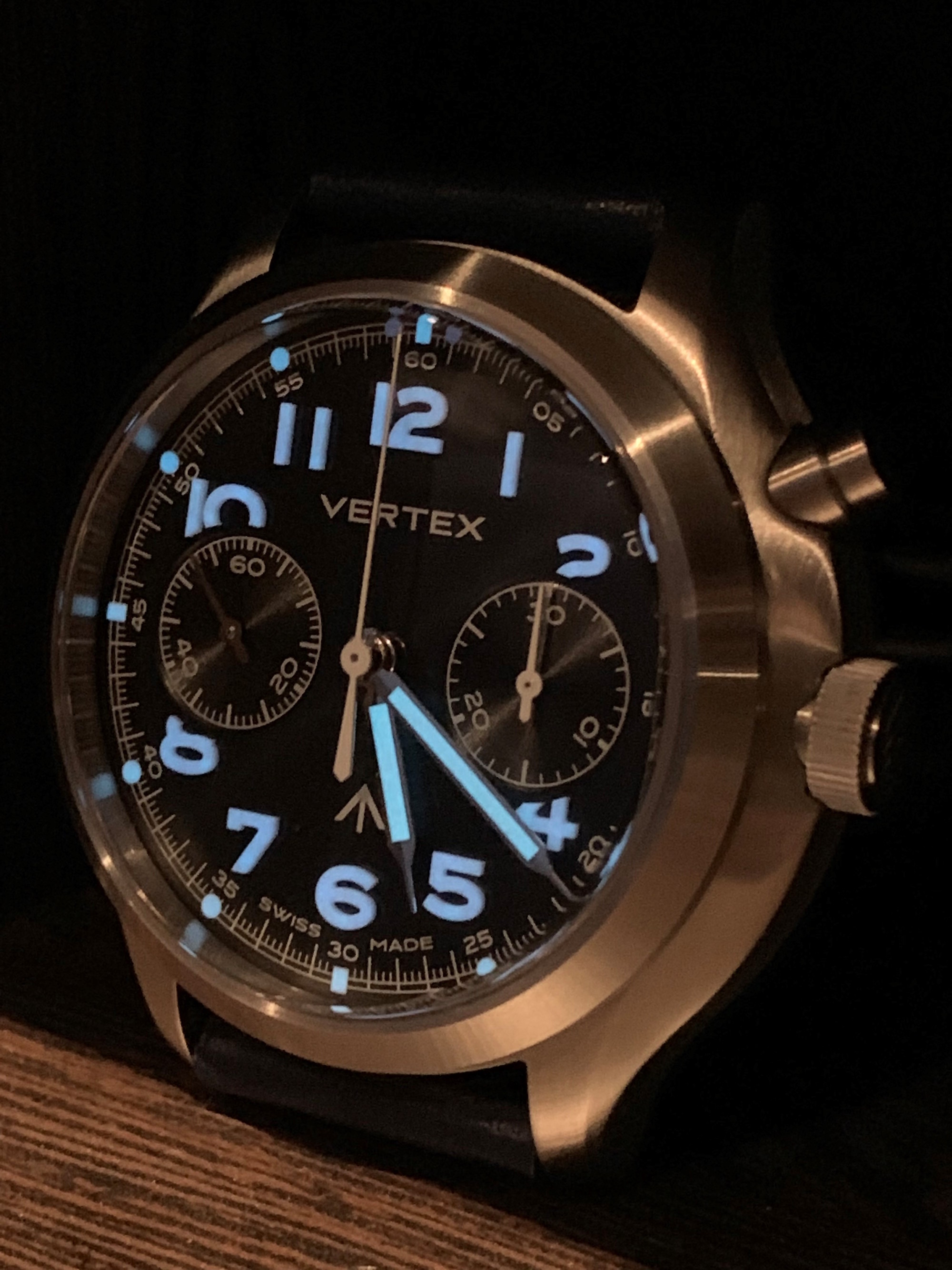 It’s my go-to piece for any occasion, the complete all-rounder. I reach for the MP45 more than any other piece in my collection — I actually miss this watch a great deal when it’s not on my wrist. Whether I am spending the day in the office, I simply change to a leather strap and it slips nicely under the cuff. If I go to the beach, or out into the country, I put it on a NATO and it looks the part. Be it suited and booted, or shorts and a T-shirt, it looks good in any situation – on any type or colour strap. 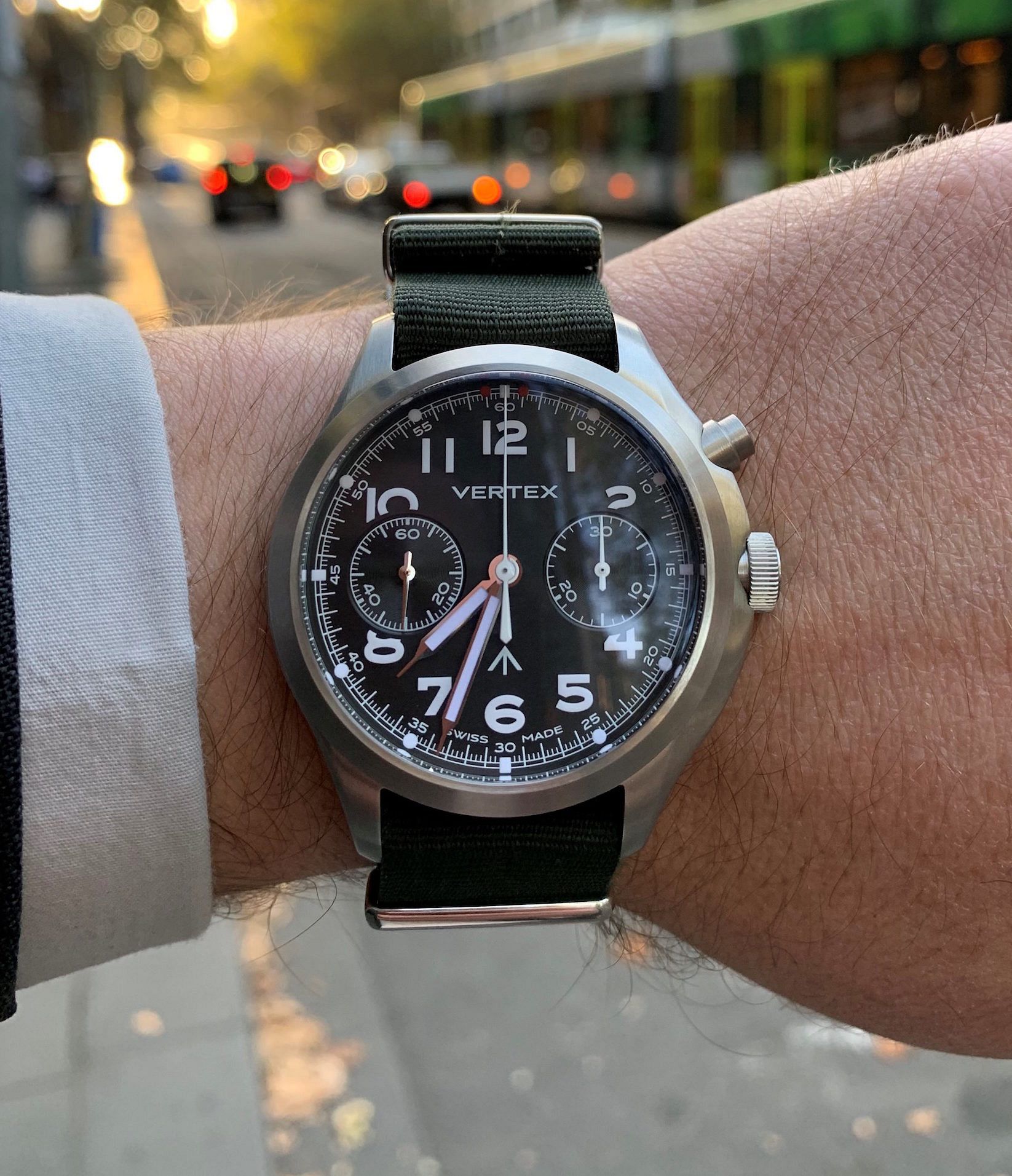 It has an amazing wrist presence; it’s perfect in size at 40mm and feels like a luxury watch should. I like to use my watches and I don’t ‘baby’ them, and the MP45 has held up to everything I have thrown at it. The way the lugs curve around my wrist make this a very comfortable watch to wear; it’s not too heavy and has a great balance. It’s extremely legible in any environment and has the added bonus that not too many people know what you are wearing. Most importantly for me, however, is that I am wearing what is essentially a slice of history, in what is one of the greatest watch designs of any era in my opinion.