With my one year anniversary with the Time+Tide team on the horizon, the only drawback has been that the pandemic inhibited all the in-person interaction I really craved. What I love about the watch community is being able to meet up, whether with members of the industry or #watchfam community, and nerd out for hours about watches. Fortunately for me, I was invited by Audemars Piguet to stop by the New York City office and spend some time with many of the new 2021 Audemars Piguet novelties and a few other recent releases as well. I have to say I was like the proverbial kid in a candy store, as it is very rare to have all these magnificent watches in the same room. Aside from making sure that I didn’t blackout from sheer joy, I had to really focus on those aspects of the watches you can really only appreciate by getting to go hands-on with them on your wrist. Each watch below is accompanied with a wrist roll and a description of my “tasting notes”. For full specifications and reviews I have embedded links to full overviews of the watches throughout the article below. 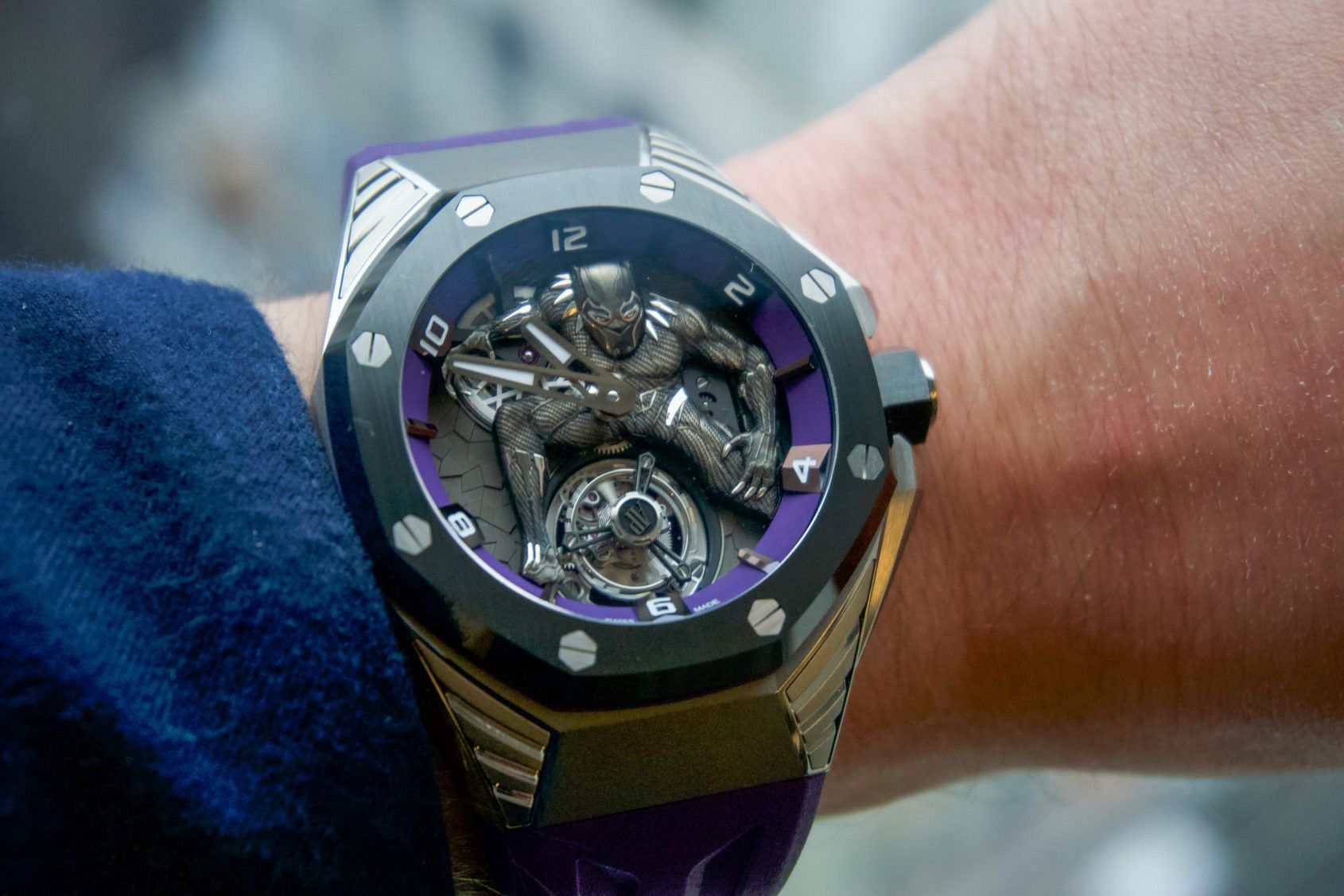 I won’t pretend there wasn’t an initial “huh?” moment in the community when the Code 11:59 was first announced. But just like the Royal Oak, I believe as time passes many will acquire a taste for this beautiful watch (and clearly many already have and rightfully so). The case leverages a blend of traditional and cutting-edge methods. As an example, a state of the art heated conveyor belt forms the lugs. But the trained hand of a skilled artisan finishes the component with a root from a specific tree. This fusion of traditional and modern methods is a harmony only a storied manufacturer such as Audemars Piguet can achieve. The textile strap is incredibly comfortable, and I was suprised how well its aesthetic fits the watch – as well as how perfectly it fits around my wrist. Also very pleased with the modern two-tone aesthetic, pairing pink gold with a black ceramic middle case – a youthful take on two-tone. I also got to see the white gold version as well, and it definitely has the stealth wealth appeal that contrasts the more visible statement metal of pink gold. Before you can break the rules, you must first master them. Before you can truly cast a watch aside, you must try it on in the metal. Consider me very impressed with the 2021 Audemars Piguet Code 11:59 collection.

This was probably the watch I was most excited to get hands-on with. The smoked green dial of this platinum Audemars Piguet Royal Oak Jumbo is phenomenal and very dynamic depending on the light – varying from a dark forest green in dimmer light to a brighter emerald shade in the sun. The thin 39mm x 8.1mm case is such a classic dimension, and it situates itself well on the wrist – the platinum weight oozing a tactile luxury experience. The external finishing is, as expected, absolutely top-tier and emblematic of the AP’s artistry and watchmaking know-how. Excuse the shaky wrist in the video above, balancing the hefty platinum on my tiny wrist was quite the balancing act, but fortunately its weight is very centered. Probably the last time I’ll see this watch unless I meet a lucky owner, and perhaps the last time we see a Royal Oak Jumbo as we know it with the 50th anniversary of the watch coming next year.

The Audemars Piguet Royal Oak Concept Black Panther Flying Tourbillon Limited Edition is another perfect example of why you should only pass a final ruling on a watch once you have held it up close. I genuinely have to say it is even more MARVELous in the metal. The white gold Black Panther figure is extremely detailed, undergoing 30 hours of hand finishing alone. The movement is also nicely finished with a detailed Wakanda motif to its bevelled bridges. I really enjoyed the watch on my wrist, the titanium is very lightweight so while it does not have the heft some associate with luxury it is much more wearable and comfortable metal to have on the wrist all day. Very impressed, and I am excited to see how Audemars Piguet’s relationship with Marvel evolves in the future.

I fully expect this Audemars Piguet Royal Oak Chronograph Limited Edition of 125 pcs. to end up in Conor McGregor’s collection. When I first saw the press release for this watch I joked that somewhere the green/gold Daytona was hiding under the bed. The green “Grande Tapisserie” dial is not too loud, it has a rich dark tone that really suits the yellow gold case and bracelet it is paired with. The yellow gold also conveys the top-tier external finishing I have been speaking to during this series of AP novelty posts, but it really comes through on the classic yellow gold. It offers a nice precious heft on the wrist. I can’t speak to the exact numbers, but being a slightly larger and thicker watch than the Jumbo in platinum, I would say the weight was on par if not a tad bit heavier than the smoked green beaut. Again, can only speak to how it felt in the moment on the wrist.

The new Audemars Piguet Royal Oak Offshore 42 models have a re-profiled and more ergonomic case design that better conforms around the wrist – something my smaller wrist really appreciates. I expected the watch to dwarf my wrist, but assuming I could afford or have access to one of these watches I could actually see myself being able to pull it off. The watch leverages a brand new in-house caliber 4308. As expected, it features top tier finishing and embellishments including Côtes de Genève, traits tirés, circular graining, and well executed beveling to the bridges. Self wound by a blackened gold winding mass, the movement also boasts 60 hours of power reserve. The watches are more versatile than ever thanks to an easy-to-use interchangeable strap system. Simply depress the two underside triggers found on the back of the intermediary links that integrate into the case to pull the strap off and simply push the other strap in to the slots to reattach – an audible click signalling you’re good to go. With a second strap bundled with each reference, out of the gate you can make each watch look like two.

It really is amazing how Audemars Piguet achieves the same level of finishes in ceramic as they do in their metal watches. The black ceramic has a rich satin brush and the polished elements are still highly reflective. I am not typically a fan of skeleton or openworked dials, but with such a high degree of finishing applied to the movement I would definitely make an exception for this Audemars Piguet Royal Oak Double Balance Wheel Openworked Black Ceramic watch. The best way to describe the movement is a city of chamfers, and with the openworked nature of the caliber there is plenty more to drool over. It’s great that whether on or off the wrist you can always see the hand finished movement at work, the contrasting pink gold double balance wheels the stars of the show. On the wrist it is super lightweight, but don’t let its lack of heft fool you – it is the epitome of luxury.

The Audemars Piguet Royal Oak two-tone steel/rose gold 34mm I tried on was actually sized for a model the day prior, so there was some concern I wouldn’t be able to actually get the watch on my wrist. But to the surprise of AP’s staff it fit my tiny wrist like a glove. If it were mine I would not have to add or remove any links from the bracelet, it really was a perfect fit. The brushing is absolutely superb and the polished shoulder bevelling and side facets of the intermediary narrow links create an on demand light show with each wrist roll. In person the dial is a bit small, as the bezel and case take up a good portion of its dimensions. The same goes for the exhibition caseback, and the movement is also quite small – nonetheless the Vaucher ebauche maintains a high-degree of decoration. I thought the 37mm would be my personal pick, but it may very well now be a 34mm.