The downtime we all had during the lockdown(s) led to heavy binges of streamable content. So, while I was never really a purveyor of anime previously – during the pandemic I definitely went down the rabbit hole. With drawn-out episodic stories that ever so slowly build to their climax, you can spend a lot of hours consuming this incredibly popular art form. While many of these stories take place in imaginative worlds that by no means follow the rules of our own, timepieces still manage to permeate anime storylines in various forms. So, here are some of the best moments and sightings of watches in anime.

Death Note and the Speedmaster lookalike central to the story One of the first anime series I explored was the brilliant Death Note. A gruesome story of death, despair and detective work, Death Note revolves around an incredibly dangerous notebook that allows its owner to write how someone will die, right down to the exact manner and time. Once written into the notebook, the manner of death becomes unavoidable.

I refuse to spoil all the twists and turns Death Note has to offer, but what I can tell you is that a watch, eerily similar to the Omega Speedmaster, plays a central role in the storyline. Protagonist Light Yagami cleverly devises a means to stealthily carry a powerful page of the notebook hidden in a secret compartment of his watch. With it is a pin, which he can use to quickly prick his finger and write out a cause of death for an unfortunate victim of his choice using his blood as ink. Essentially, it’s like carrying a personal assassin on his wrist, who’s ready to spring into action whenever he calls.

Another fan-favourite, Jojo’s Bizarre Adventure follows various generations of the Joestar family who are imbued with the powers of ‘Hamon/Ripple’, and, in later seasons, ‘Stands’. It is a bit complicated to explain if you have not seen the show, but a ‘Stand’ effectively provides a Stand User with their supernatural power. These powers are not your typical flight or super strength, they are highly specific powers that lead to multi-episode battles – cunning chess matches that revolve around how to best use their power. One of these standoffs (pun intended) is between Jotaro Kujo (a Joestar descendant) and the villainous Steely Dan (many characters are named after musicians). Following one confrontation, Steely proceeds to rob Jotaro – taking his cash and TAG Heuer watch – which the character claims is very “audacious” to wear. The watch drawn is said to be based on the TAG Heuer 2000 Professional Series Model 972.013.

Lupin The Third and his Zenith Chronomaster

Lupin The Third is an anime series that revolves around the world’s most wanted thief Arsène Lupin III – grandson of the famed Arsène Lupin. Arsène Lupin is a character borrowed from French author Maurice Leblanc, and his beloved 20-volume work of Lupin stories that are widely compared to Sherlock Holmes. In the first-ever episode of the animated series, Lupin III’s best friend and ‘aide-de-camp’ Daisuke Jigen (a character modelled after actor James Coburn) can be seen wearing a Zenith Chronograph watch while racing. While the dial colour scheme did not yet exist at the time, in 2019 Zenith created a 50-piece, limited-edition model based on the anime-drawn watch exclusively for the Japanese market. 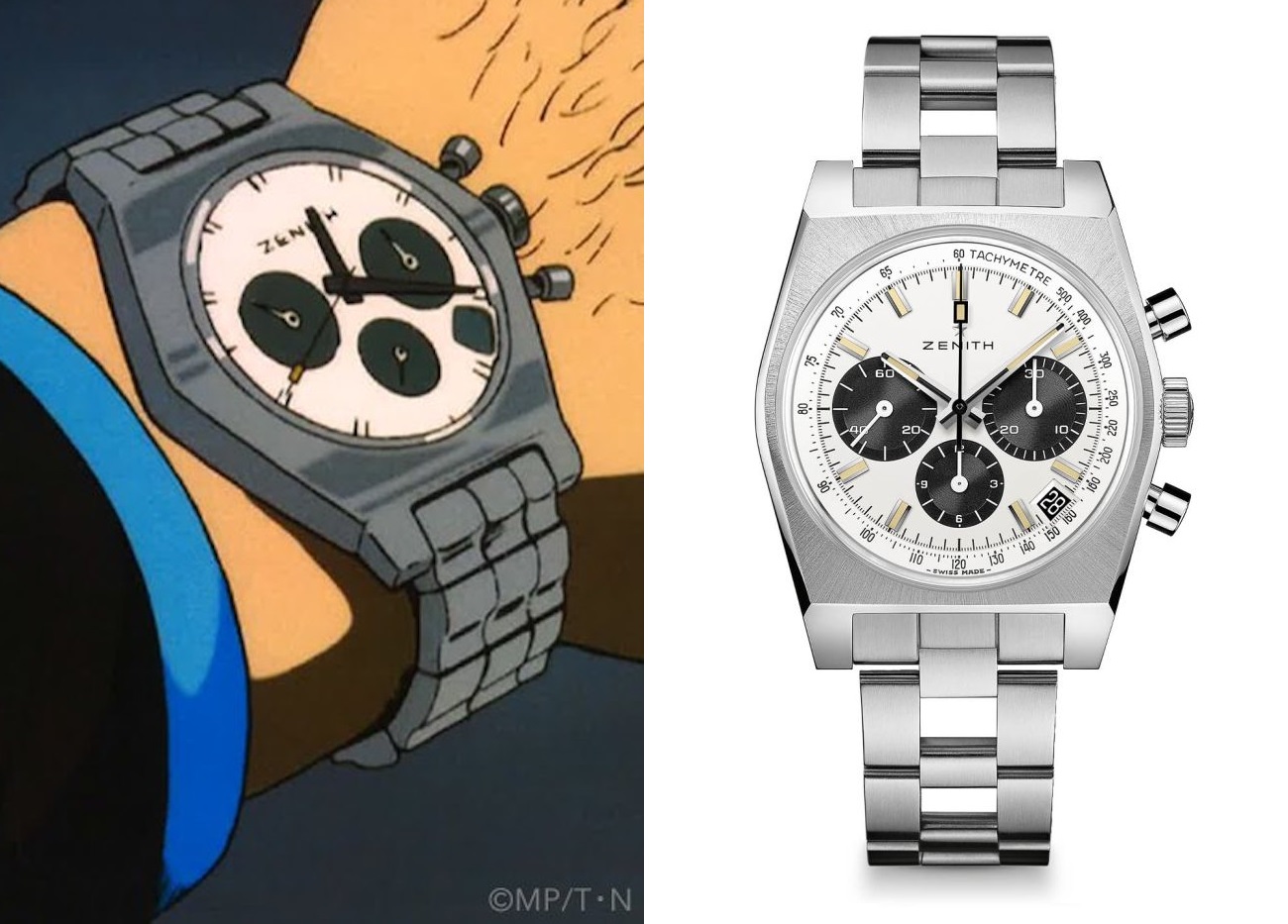 A second model was then created, based on a white-dialled Zenith Chronomaster seen in the last episode of the first series. This 2020 limited edition of 200 pieces was made available worldwide. 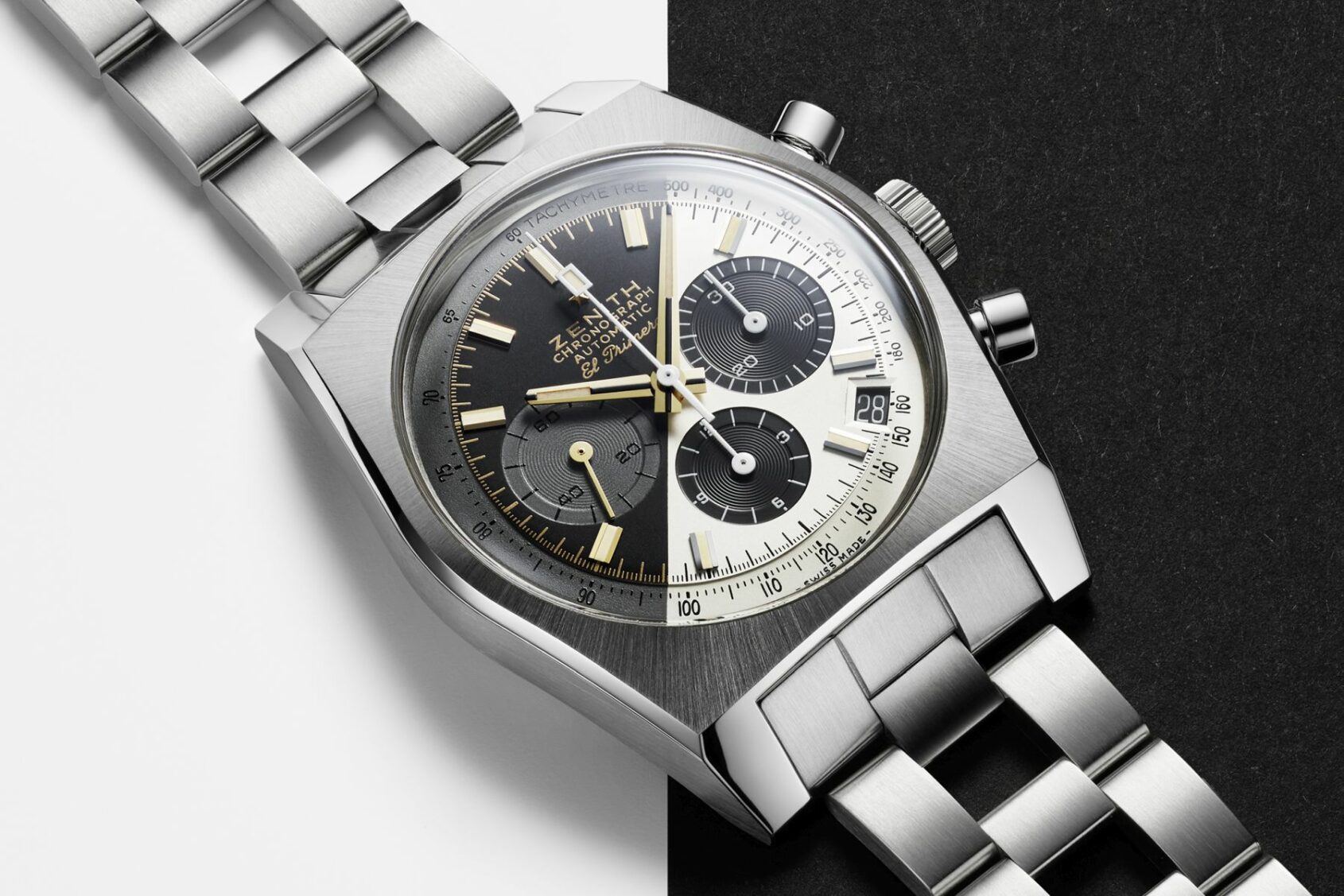 On the heels of the success of both limited editions, and considering the name of the show, Zenith introduced a final variant to round out the series of three limited editions. This third limited edition, unveiled at the beginning of the year cleverly combined the two dials into one – a diagonal line separating the black and white dial schemes of the previous two. Only 250 pieces were made. 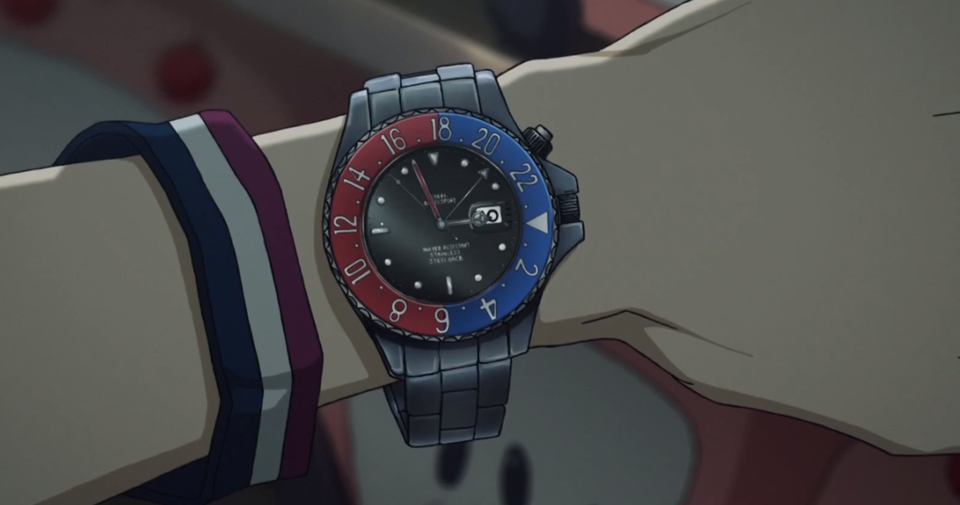 Rolex watch design is so distinct you can spot one from across a room. However, this means you can also tell when something is out of place. In the anime Zankyou no Terror, once character can be seen wearing an aberrant version of a Rolex GMT Master II “Pepsi” – the additional 2 o’clock crown a clear tell. As one reddit user points out, in the thread the spot was made, upon closer inspection the dial brand reads “Bagelsport”. The user explains: “Bagelsport is a pretty obscure cheap Chinese knock-off brand that specialised in fake Rolex a few years ago, and got pretty popular on some “homage” (fake) watch forums. Pretty funny that instead of putting the actual Rolex in the cartoon they went for Bagelsport.” This is not an anime I have personally seen myself, but apparently the character is a terrorist in tune with fashion and internet trends. So, while anime stories can be quite imaginative and unrealistic, it appears to be in line with the character background. Another unmistakable homage to highly distinguishable watch design, in the anime 5 Centimeters per Second, the character Tono Takaki can be spotted wearing a watch clearly modelled after the G-Shock ref. G-2500. The watch is more than just an accessory in the anime. In fact, it features heavily in the story, playing a huge role in showing the passage of time and the character’s growth. 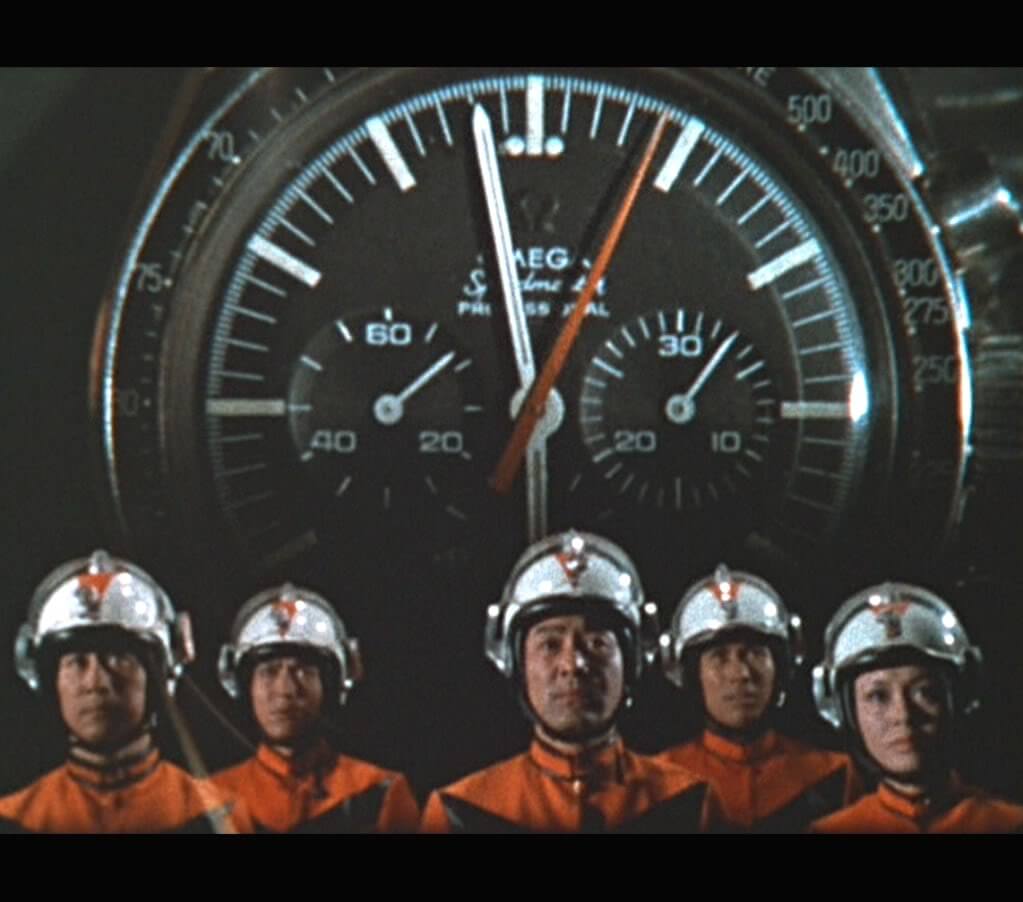 While not technically an anime, but rather a live-action version, anybody who is familiar with the Omega Speedmaster and #SpeedyTuesday knows the tale of the Speedmaster Ultraman. 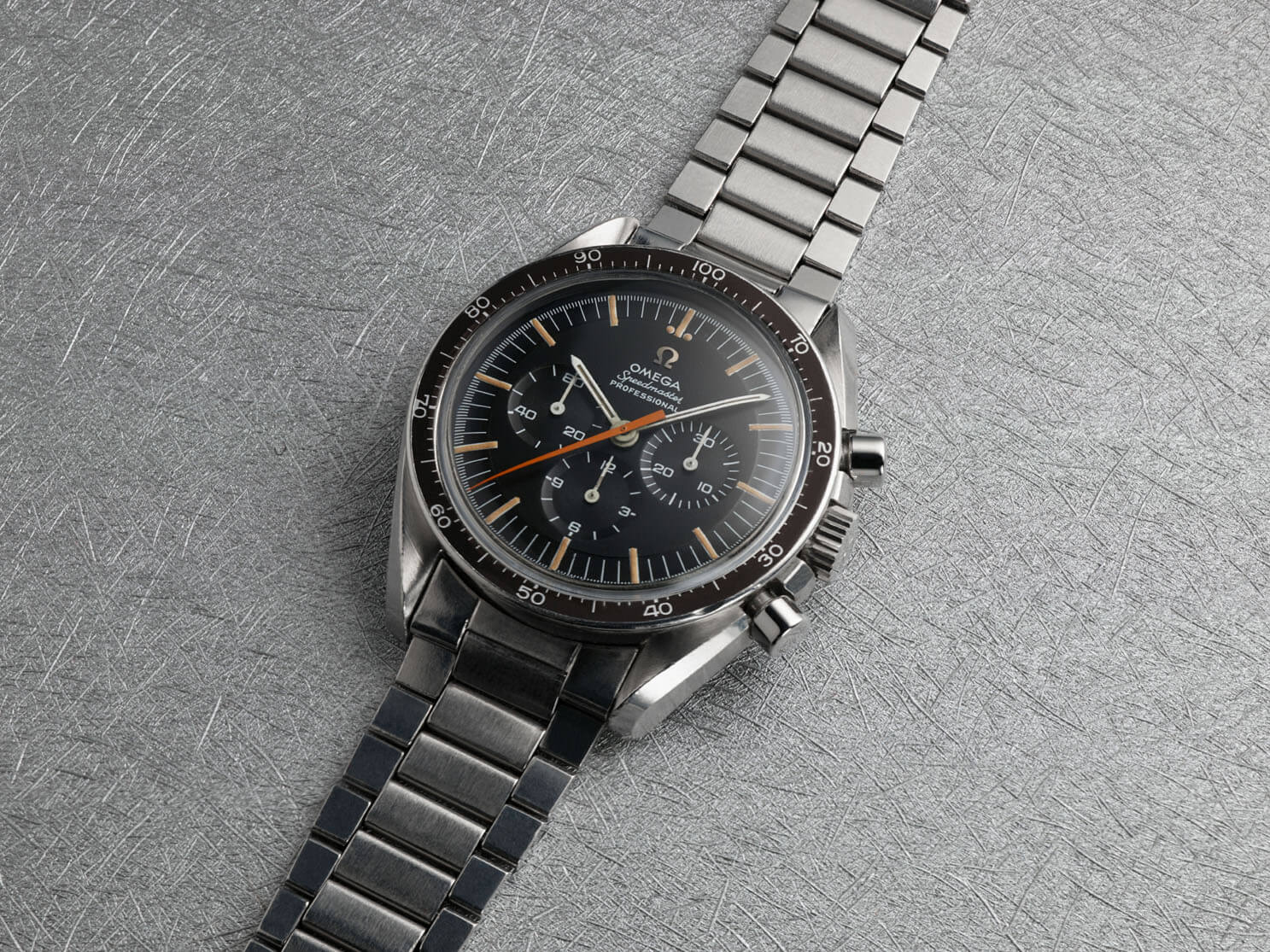 This rare Speedmaster ref. 145.012 stands out it with its distinct orange central chronographs seconds hand in the Japanese science fiction TV show The Return of Ultraman in 1971. Omega explains: “The creator of the Ultraman series, Eiji Tsuburaya, was known for including interesting watches in his productions, and this very uncommon Speedmaster is no exception. It is unknown how many genuine pieces still exist.” 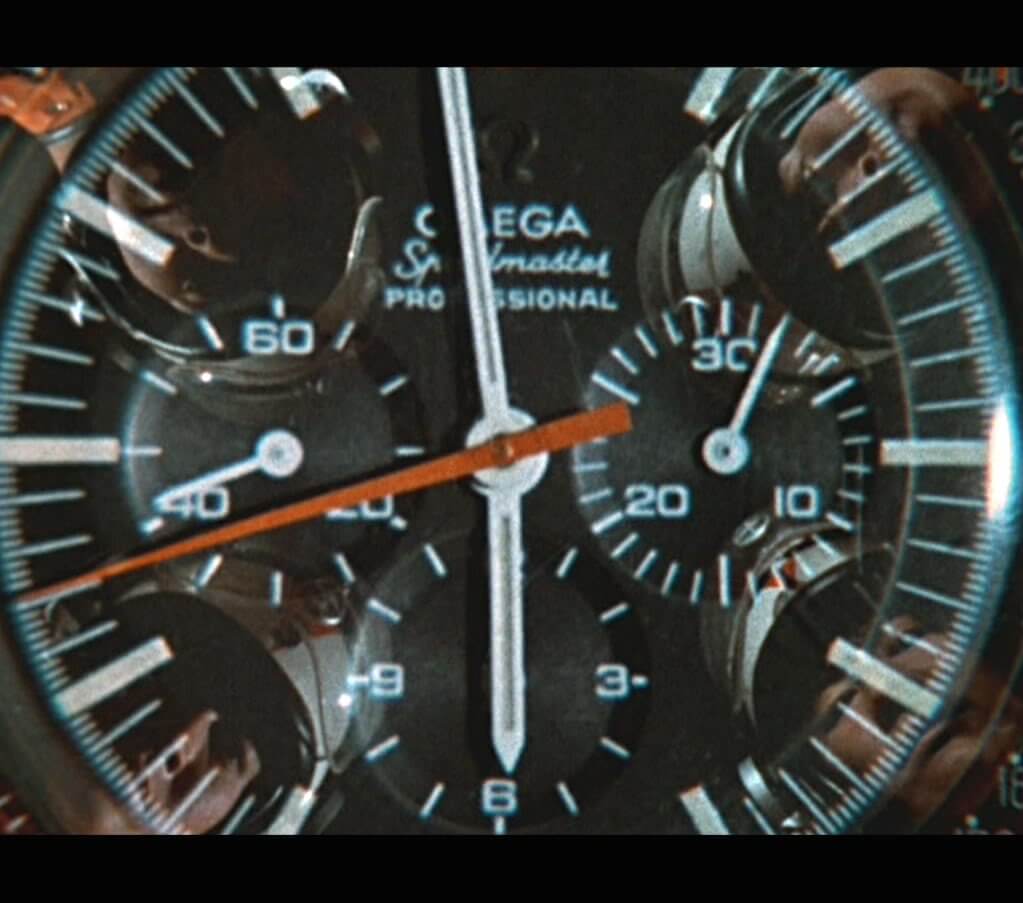 In 2018, Fratello Watches paid homage to this rare Speedmaster with a second #SpeedyTuesday limited-edition watch that utilised the signature orange seconds hand and boasted a few subtle nods to the TV show as well.

Last but not least with another technical entry, while not anime the successful animated Harley Quinn series is a highly comical take on the DC universe’s most famed villains. It can be over the top, and definitely takes liberties with its characters. But as a watch geek, one of my favorite moments at the beginning of the new season involves The Riddler and his significant other Clock King while on the red carpet in Gotham. As the reporter interviews the pair, she asks what they are wearing. Clock King replies: “My clock tonight is by the master Patek Philippe.” I immediately had to pause and rewind when I first heard that – clearly someone on the writing staff is a watch geek. Or, to be fair, maybe it is simply evidence of the fact that the growing popularity and interest in mechanical watches has become so large they are now permeating into the broader pop culture.