When people think of Omega, the usual suspects are the Omega Speedmaster and Seamaster. But the truth is the catalogue is so much more than those two collections. The Aqua Terra is an unsung hero, and is arguably Omega’s answer to the Datejust – but with even more technical prowess. These watches feature casual builds with professional-level technology – and can even frequently be spotted in Bond films as the famous spy’s watch of choice. With Lashana Lynch set to wear a 38mm black dial Aqua Terra in No Time to Die, we thought it would be good to review in-depth the lesser discussed Aqua Terra 150M.

The story in a second: The Aqua Terra recently received a major upgrade, and now we’re seeing Omega’s staple in a whole new light. 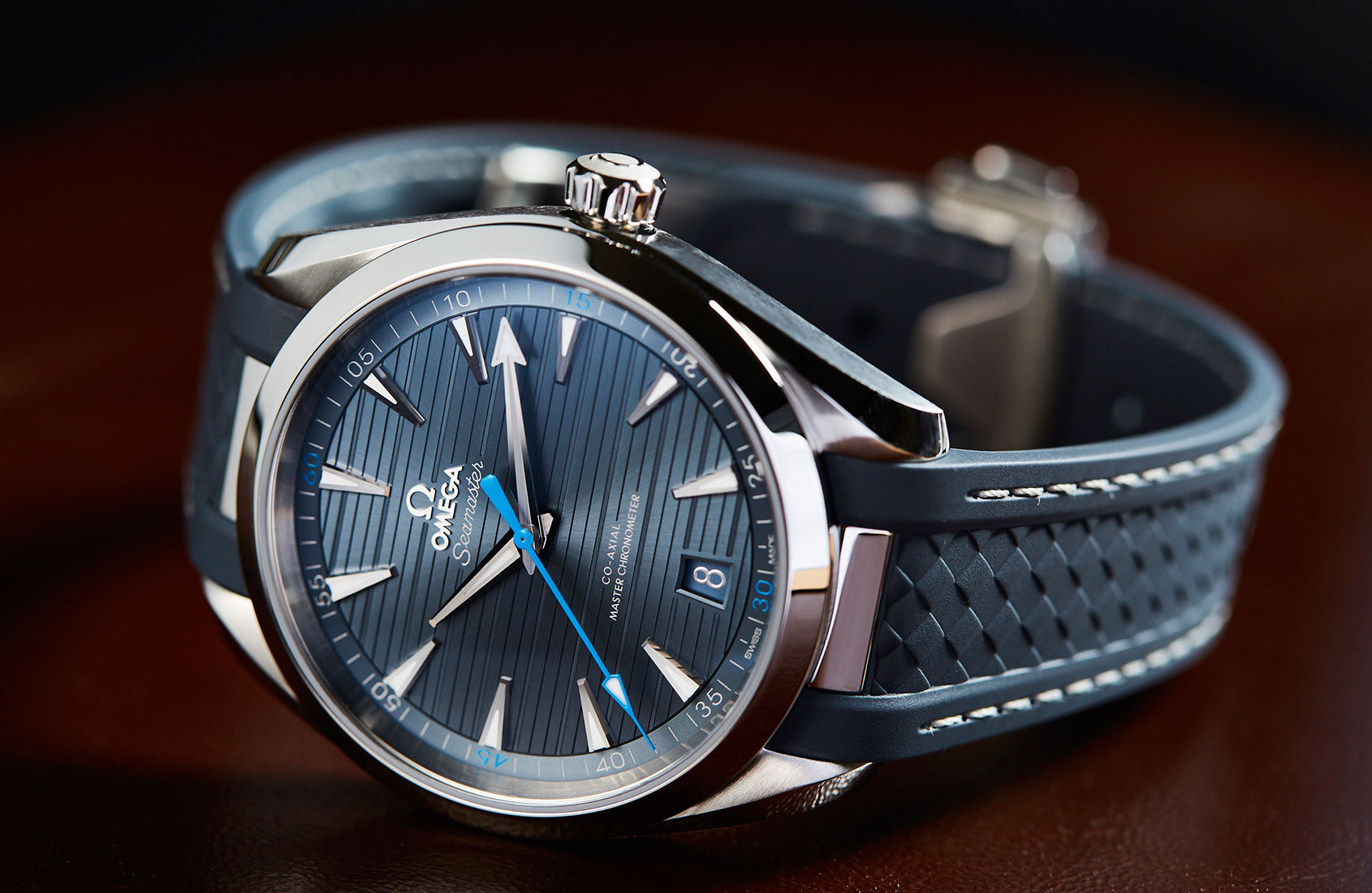 Since it first surfaced in 2003, Omega’s Aqua Terra has been a versatile everyman: stylish and sartorial, but tough enough for the real world. This year the collection levelled-up to Master Chronometer status and we thought we’d take this sparkly 41mm rubberclad model for a spin. 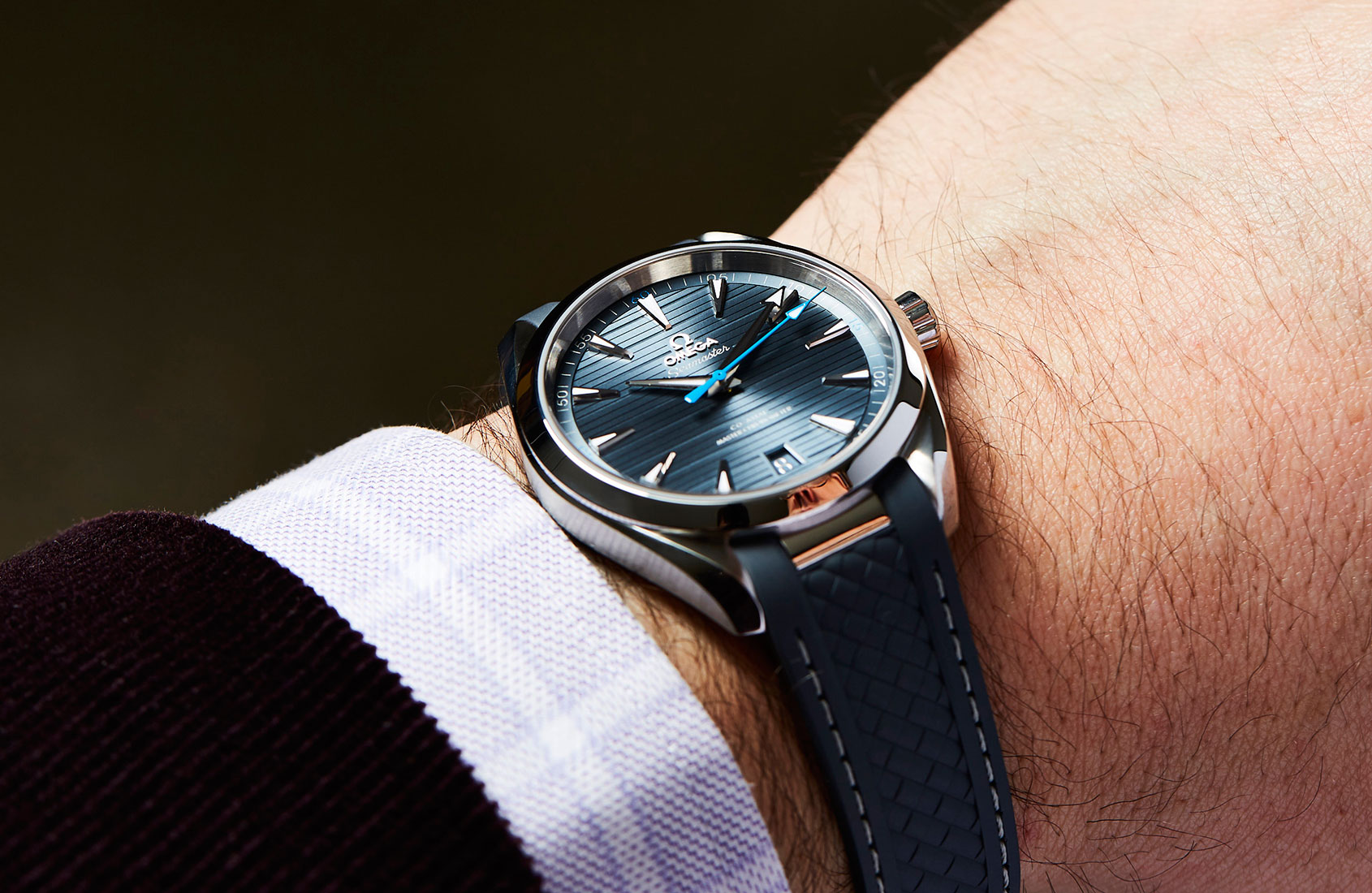 The case of the Aqua Terra hasn’t changed too obviously — it’s still the same classic shape, with sporty, swooping, twisted lugs and polished surfaces aplenty. It’s a combination of casual style and dressy finish that helps the Aqua Terra’s chameleon-factor.

All models are offered in 38 or 41mm widths, a slight reduction from the previous generation, in line with changing tastes and sized  to please pretty much everyone. One change you might notice is the crown. Omega have flared it ever so slightly, giving it a more conical shape, simply to improve the ergonomics, which was apparently an issue on older versions. I don’t have much personal experience on that front, but I had no issues with this one. 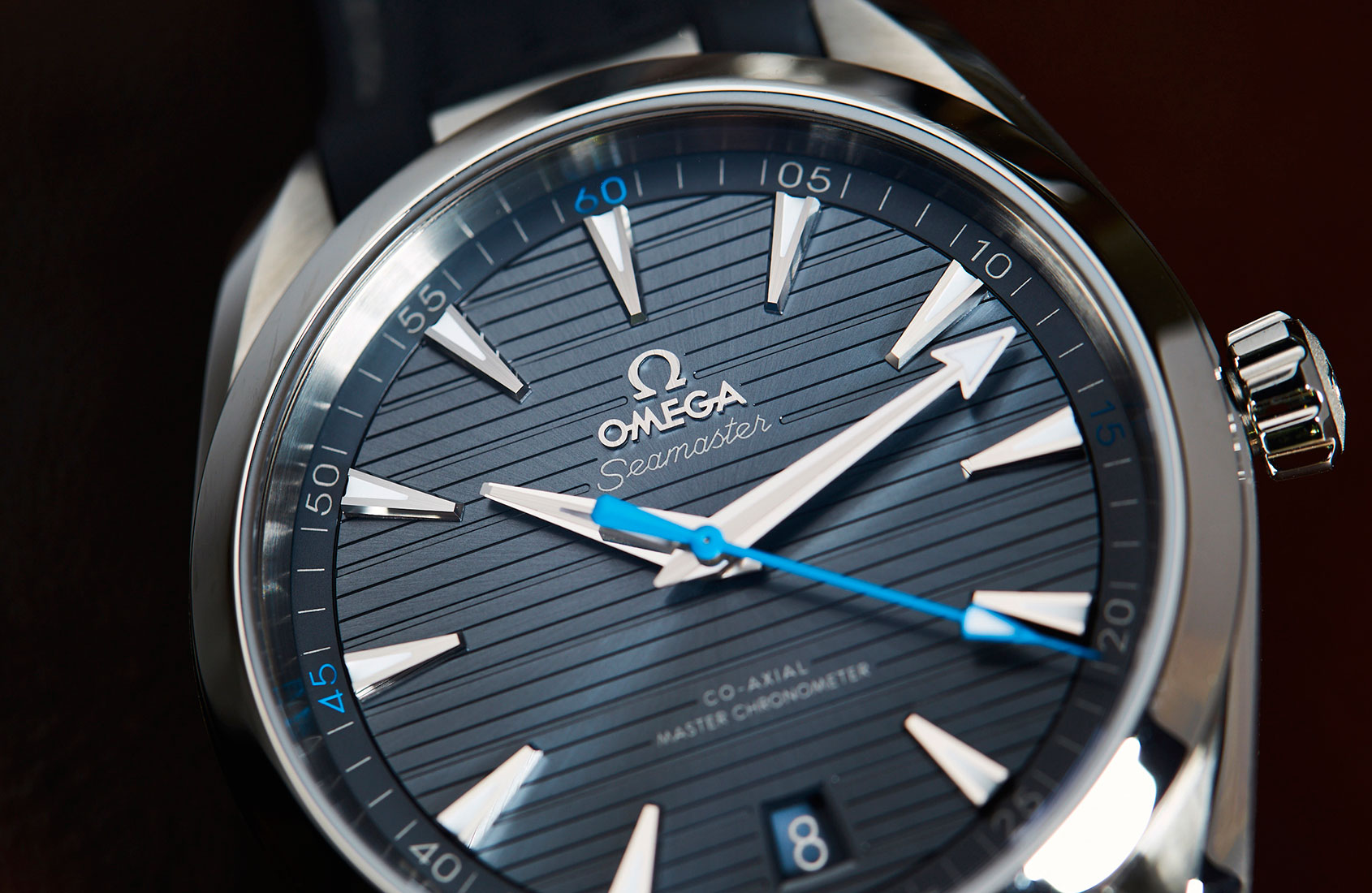 The most obvious cosmetic changes have been applied to the dial. The AT’s instantly recognisable striped finish is still there, only now it’s horizontal rather than vertical – a decision Omega explained by saying it was intended to evoke yacht decking. While that’s a nice story, for me the horizontal just looks better, no other reason needed. Speaking of this striping, one thing I noticed only when I was looking through Jason’s shots of this watch is that the lines of the dial aren’t even. Some are thick and some are thin, creating the optical illusion of a vanishing  point at the centre of the dial. Neat trick, Omega. 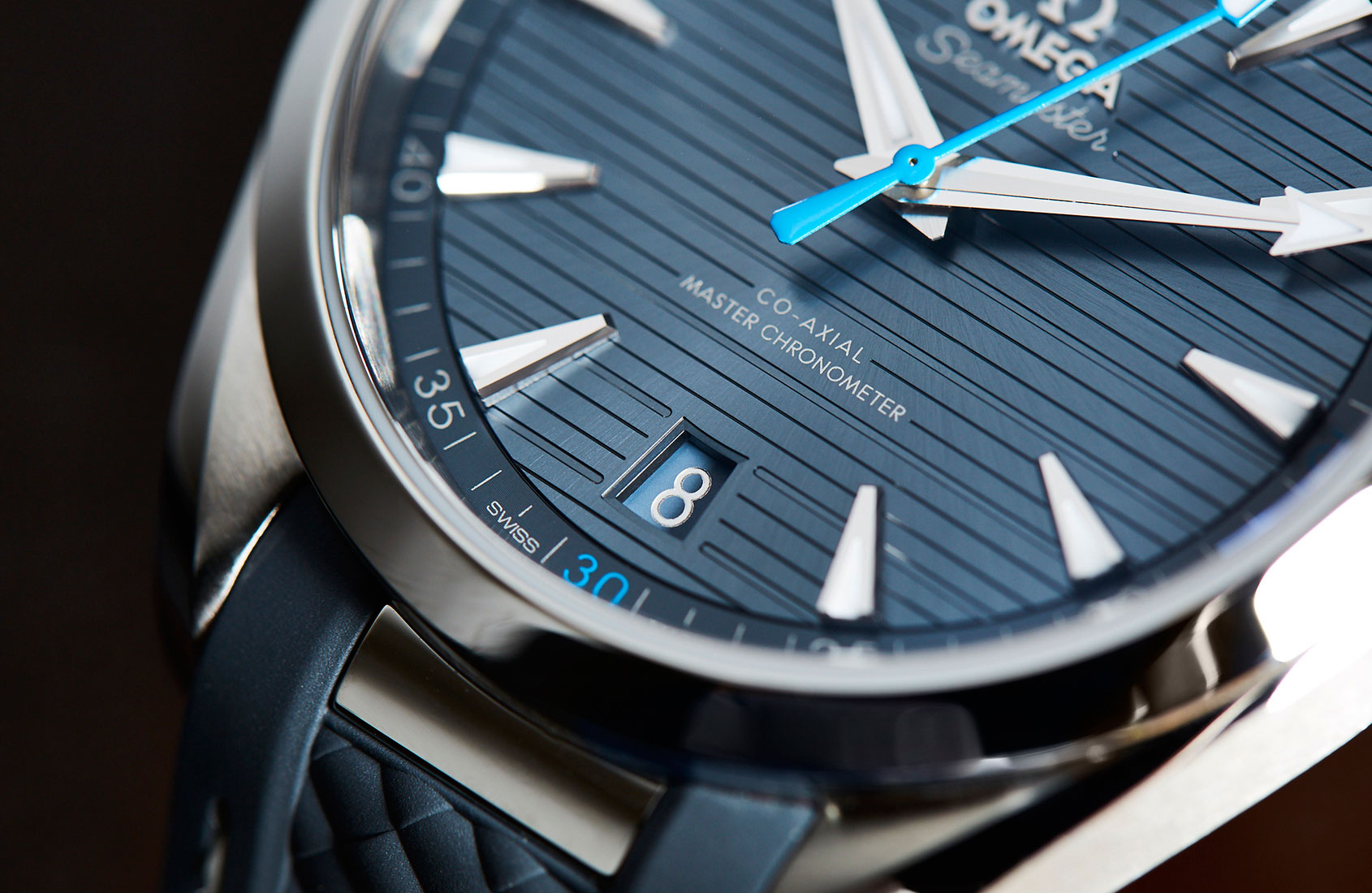 The direction of the detailing isn’t the only thing that’s changed. The date has moved to six, a more balanced position than the previous three o’clock, and a move inspired by the date placement on the original Seamaster model. There’s also less text cluttering the place up – the depth rating has disappeared. These are all smart changes, which play to the dial’s strengths, namely the glittering interplay between the polished hands and applied, nicely faceted arrowhead indices. 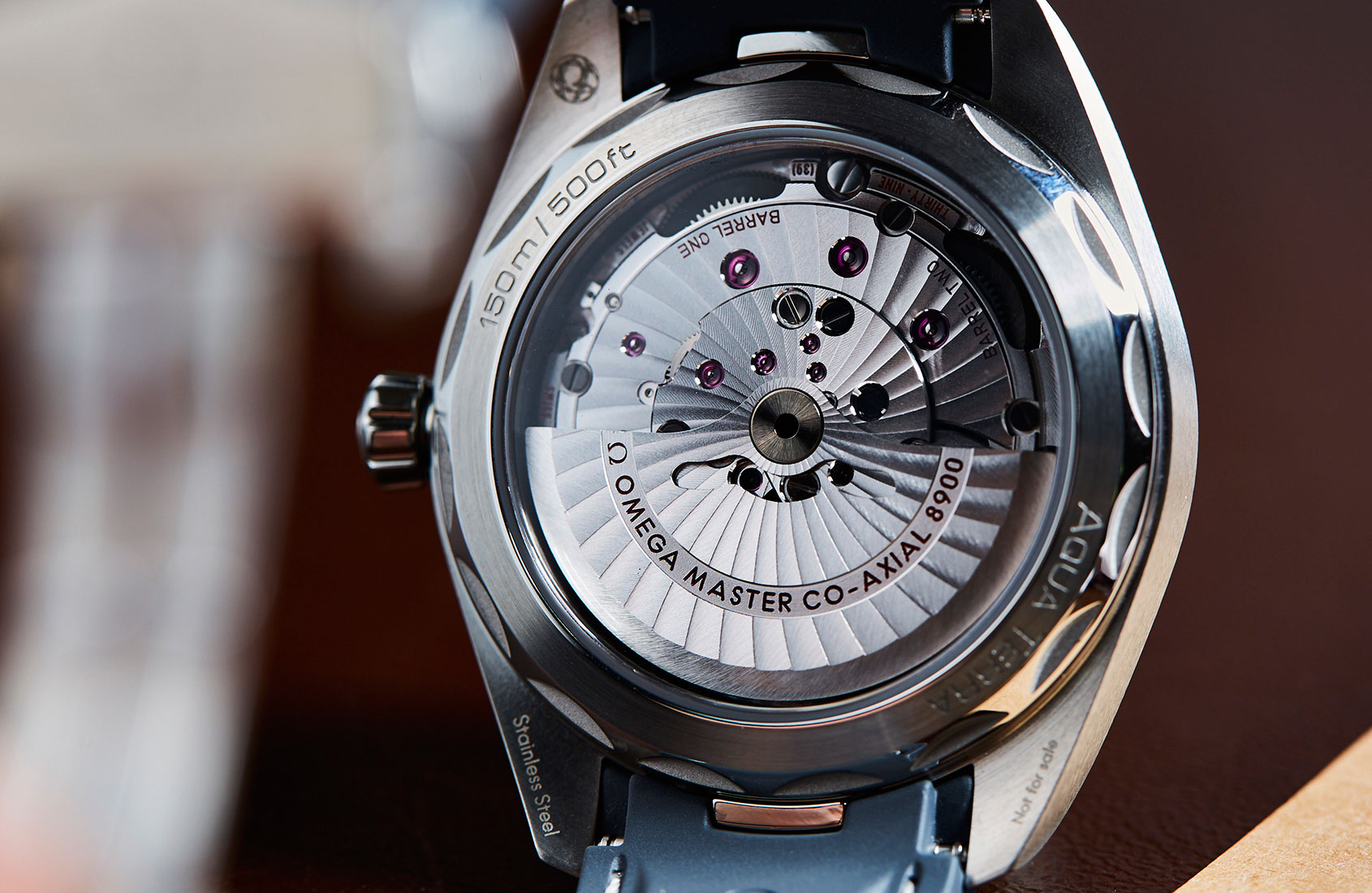 The big story with the movement is that the whole line is now Master Chronometer certified, in line with Omega’s push for technical innovation. What this means is that the entire watch (not just the movement) has been tested within an inch of its life to METAS standards, covering off accuracy in numerous positions and state of power reserve, water and magnetic resistance as well as the efficacy of the automatic winding. The smaller model uses the Caliber 8800, whereas this larger one opts for the 8900, giving you the ability to quickly and independently adjust the hour hand in one-hour increments, without interrupting the running of the minutes or seconds. A surprisingly useful feature, especially for travellers. 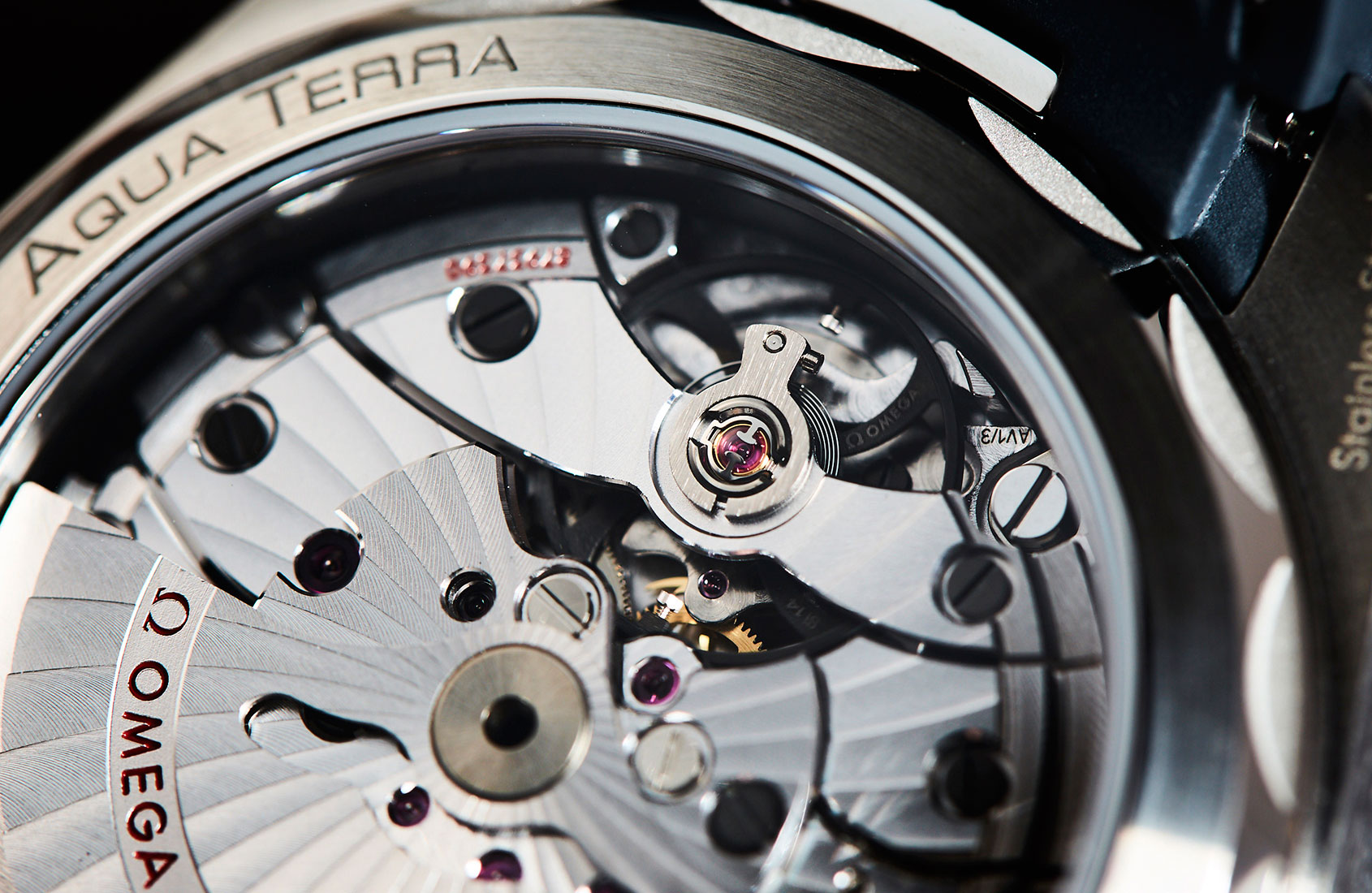 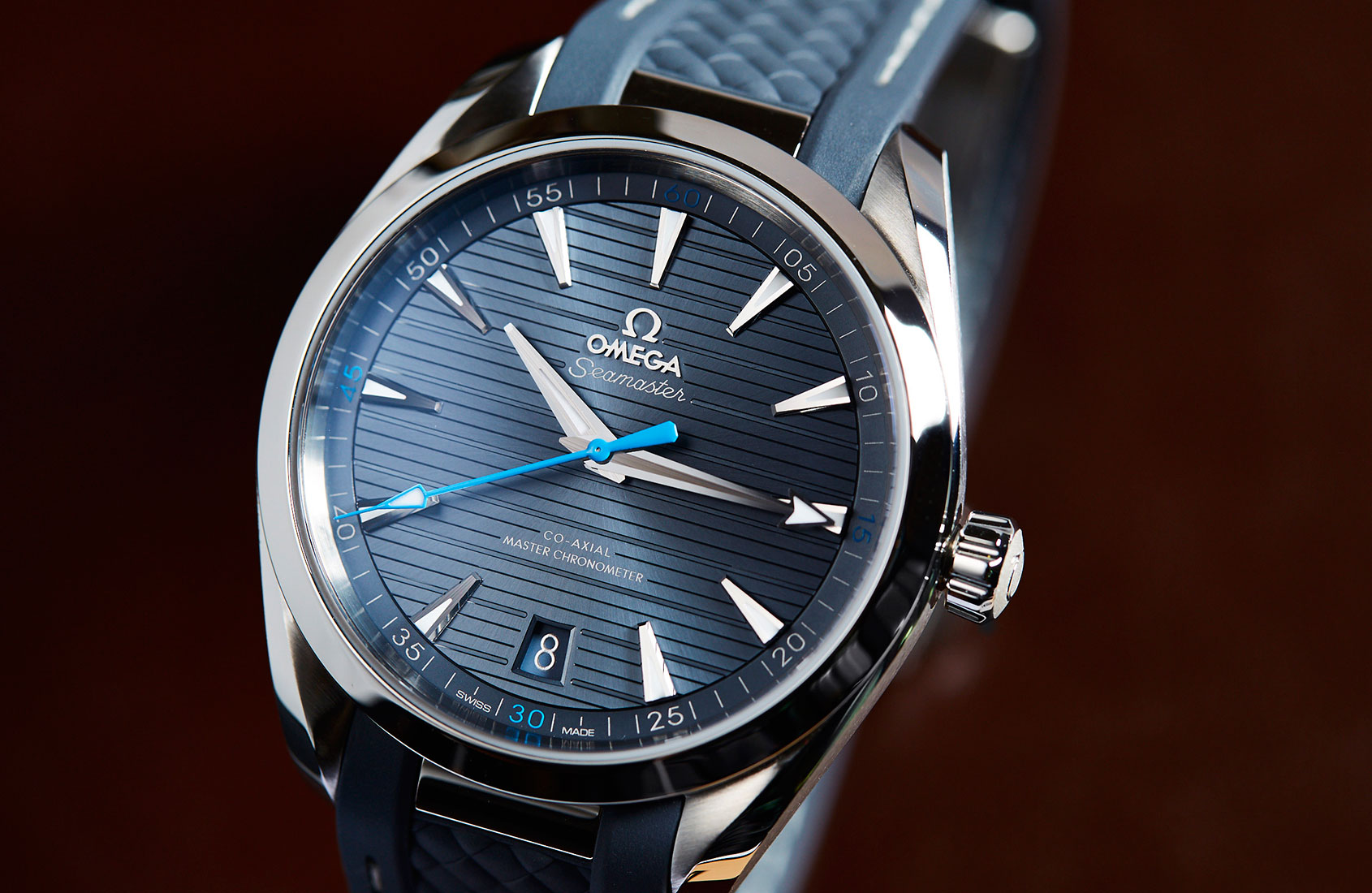 A rubber strap is a rubber strap, right? Well, it turns out not all straps are created equal, and this particular version is very much at (or near) the top of the class. At first I thought it was one of those irritating proprietary straps, thanks to the metal end-piece, and I was preparing myself for some old-fashioned righteous indignation. But then I worked out that the metal centre piece was on the strap rather than the case and I cooled my jets, as it actually gives the Aqua Terra a sportier vibe, as is appropriate given that it’s on rubber. The other nice features of the strap are the tropic-style print, and the wave-like ridges on the underside, a nice wearer-friendly touch. 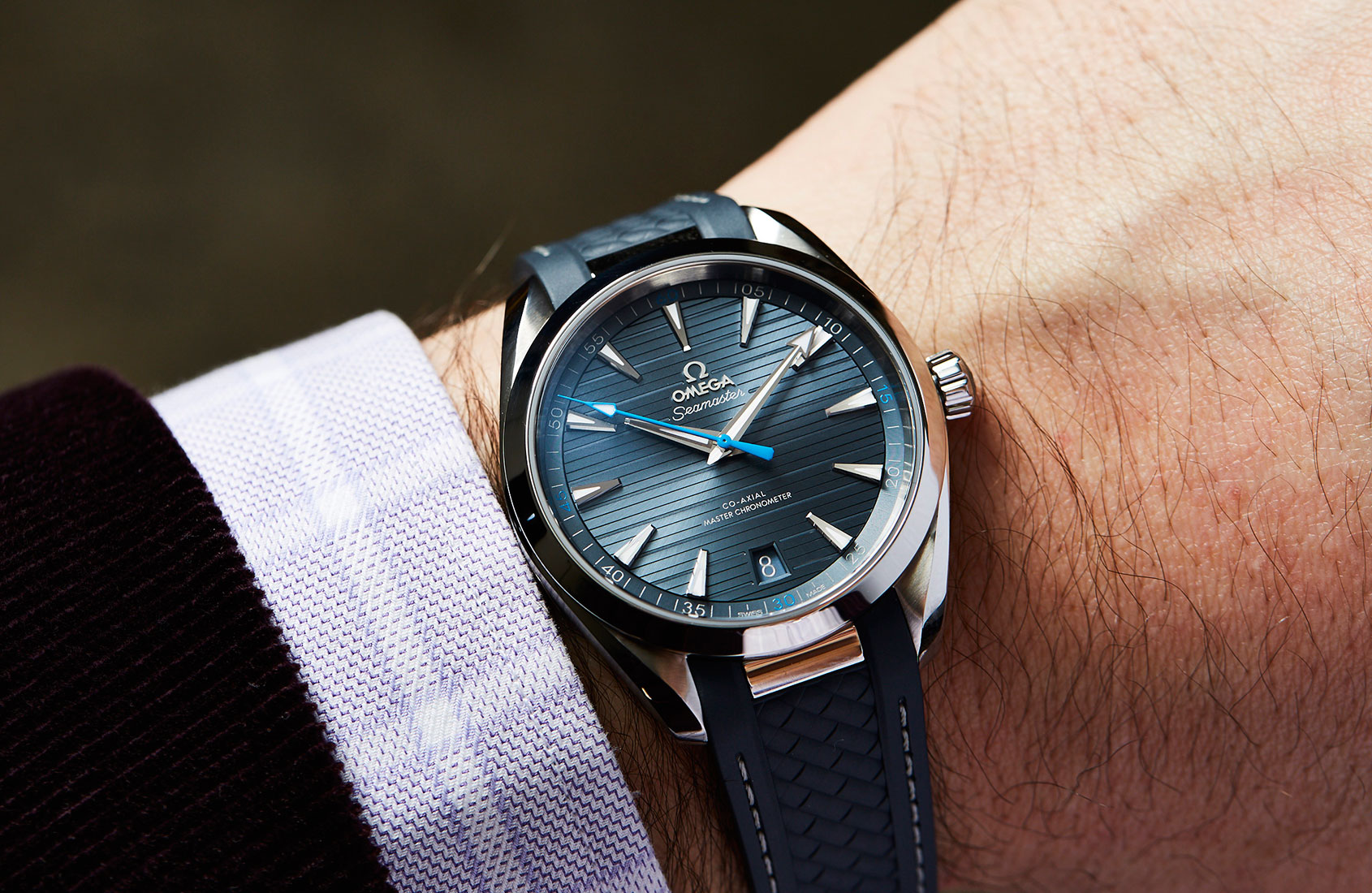 My initial reaction as I closed the deployant was ‘whoah, this is a shiny watch’, and there’s no doubt that the Aqua Terra is indeed a party on the wrist, even when it comes to the more subdued black dial versions. Having said that, it’s not ostentatious, and its glittering personality keeps it interesting on the wrist. Aside from that, it’s super comfy, perfectly sized for me, and, as I’ve said in our video review – versatile.

I’ve always thought that Omega excels at making watches with the actual wearer in mind, and this design approach is the secret to the Aqua Terra’s undeniable charm. The proportions are nigh on perfect, it’s legible, technically superb and user-friendly. The fact that it looks sharp just seals the deal.

Did you know this is Eddie Redmayne’s choice?

Don’t worry if you’re not Eddie Redmayne, the Aqua Terra will still look good on you.

Personal preference (as always), but I’d like a little less polish, and a bit more brushing, when it comes to case finishing.