Editor’s note: In 2019 we saw the popularity of existing steel sports watches with blue dials hit fever pitch on the secondary market, as well as a number of brands release their own examples of the watch that everyone wants on their wrist. But what about when a brand produces a watch that doesn’t just tell the time in the same way the other sports watches do? Enter the Vacheron Constantin Overseas Tourbillon, a sports watch that is in line with the vogue, but with a difference that will get the heart racing of even the most seasoned horological connoisseur. Let’s take another look at one of the most refined sports watches on the market.

A tourbillon inside a steel sports watch? On a rubber strap? It’s enough to bring a watch-purist out in a cold sweat. And when such a watch is launched by one of the most venerable companies in the business? Ohhh …

But that’s exactly what makes the Vacheron Constantin Overseas Tourbillon so cool. Yes, cool. Here’s Vacheron Constantin, showing off its haute horlogerie chops in casual, sports-luxe mode. The tourbillon follows a chronograph, a perpetual calendar and a world timer into the Overseas line but its presence in the collection is both strange and wonderful in a way those other complications are not. 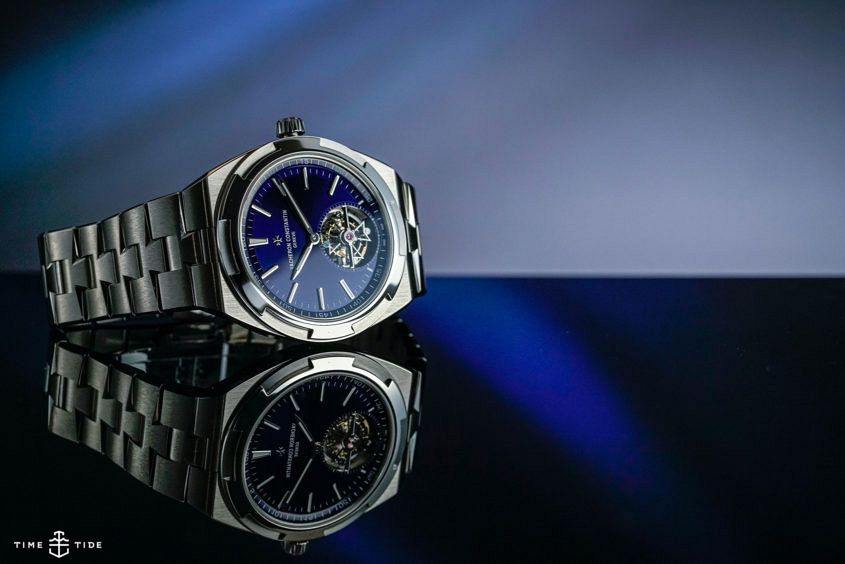 It’s not the first time we’ve seen a tourbillon in a sports-luxe line (AP, Richard Mille et al.), but Vacheron usually surrounds its tourbillons with elegant refinement and/or high complications. This is by far the house’s most understated tourbillon watch to date – and here, the delicate and beautiful mechanism sits in splendid isolation, surrounded by an ocean of blue dial. And wrapped up in steel. 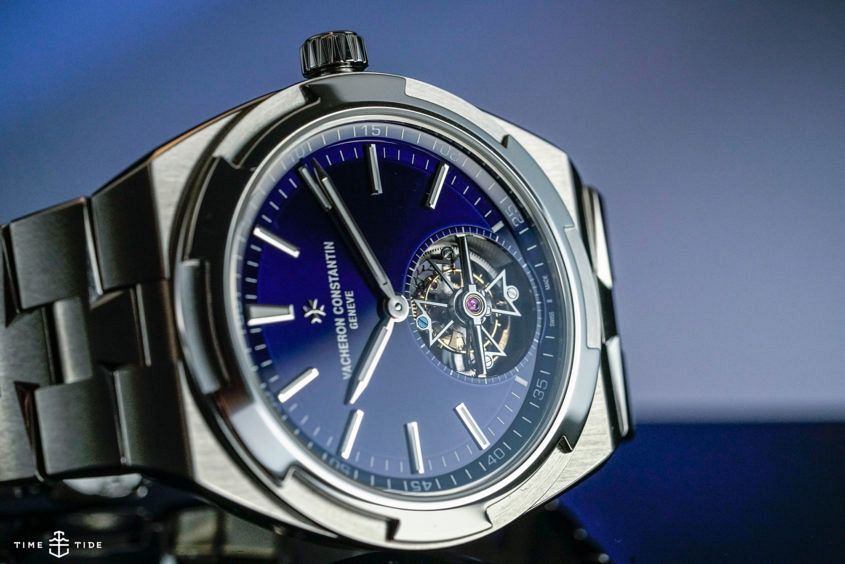 Fasten the watch to your wrist and the case shows its star quality. The proportions are great: wide enough (42.5mm) and thin enough (10.39mm) to look and feel strongly present yet really sleek. Elegant yet very sporty. A Maserati GranTurismo, perhaps, or an Aston Martin DB9.

The Overseas case owes its charisma to the six-notch bezel, made all the more dynamic in this third-generation version, with its more pronounced geometry and great finishing. The contrast between the high polish of the upper parts and the almost-matt brushed ring beneath is really satisfying. Confident, simple and eye-catching.

As befits a sporty watch, the movement is protected from magnetism by a soft iron inner ring – good for about 300 gauss (not the 1000 gauss of the full soft iron cage you’d expect on a fully fledged tool watch, but more than enough for daily wear) and the case is water-resistant to 50 metres. 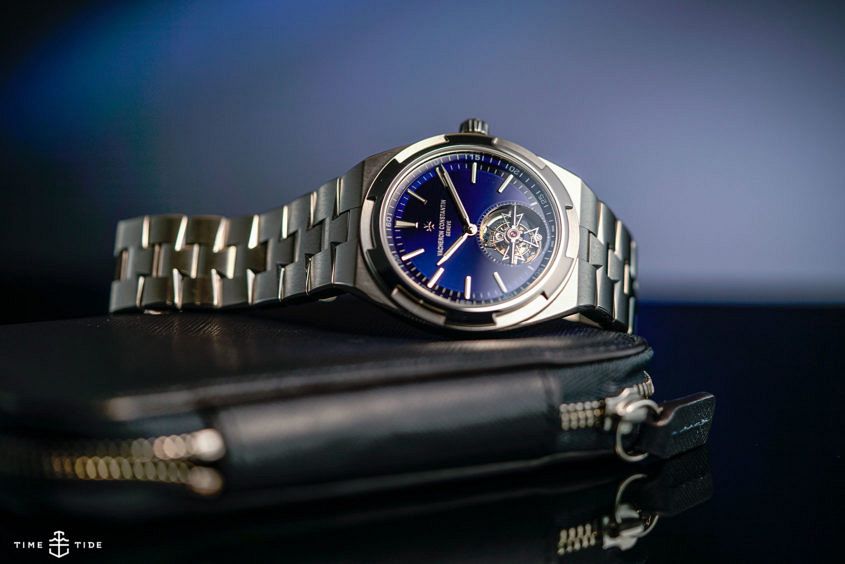 That case is ace but the Overseas Tourbillon had me at the dial. Instantly smitten – and now that I’ve seen it several times in the months since SIHH, my immediate crush has developed into a deeper appreciation.

I’m a sucker for pretty much any blue dial, but this is next-level – reminding me that there’s no such thing as enough blue dials. What matters is how good they are. This one is translucent blue lacquer laid over a sun-brushed base, graduated from rich sapphire at the centre to deep midnight blue at the edges, and on the velvety-textured flange. It has depth and volume, and seems to glow with an inner warmth in certain light conditions.

As on all Overseas models, the applied hour markers are simple white gold batons – lume-filled, like the hands. That focuses all of the attention on the lower half of the dial, where a large circular opening reveals the tourbillon, its Maltese Cross-shaped carriage, fine details and intricate moving parts contrasting beautifully with the simplicity of the dial. 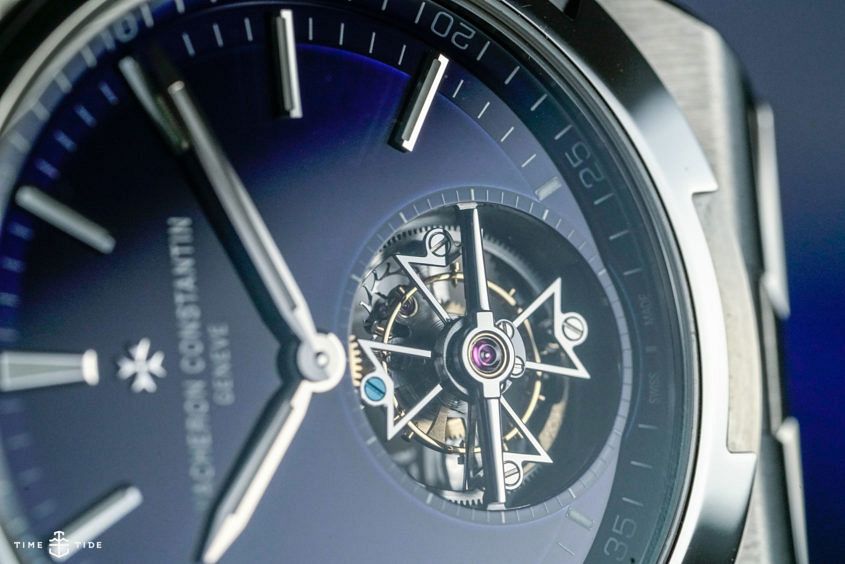 The finishing is typically Vacheron-beautiful (I’ve never understood why Vacheron is less widely recognised for the quality of its finishing than some other celebrated brands – maybe just a question of who talks loudest?). The main tourbillon bridge, held in place by a gold chaton, is hand-bevelled and black-polished – an operation that takes almost 12 hours, according to Vacheron. The tourbillon cage is also black-polished. 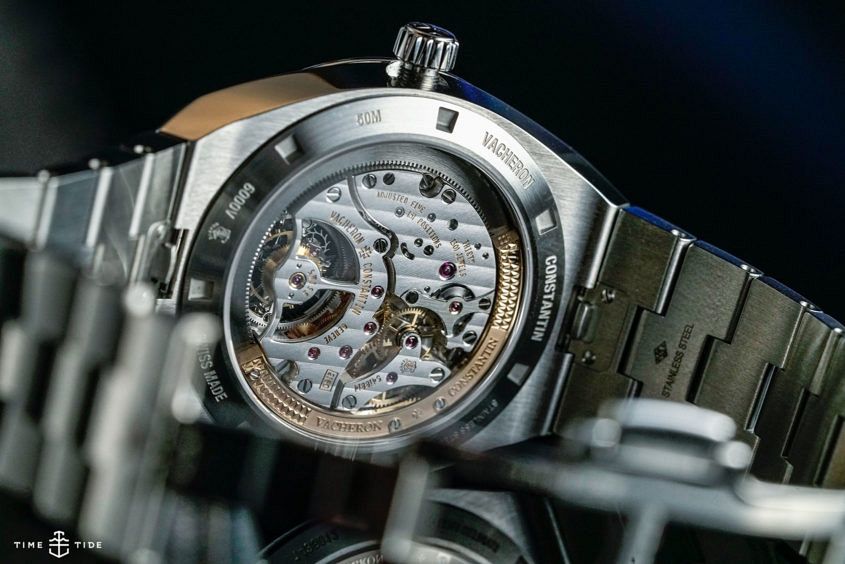 After all that gorgeousness on the face, the back of the movement is far from an anti-climax. The finish is as fine as you’d expect in a watch that carries the Hallmark of Geneva certification: thick Geneva stripes on the plates, mirror-polished bevels, chamfered slots and edges on the screw heads, circular-grained faces and bevelled spokes on the wheels. While some of the inward angles are not as sharp as they could be (compared to Vacheron’s most exacting high haute horlogerie levels, that is) all the other details provide plenty to feast the eyes on.

A peripherally mounted rotor – made from solid 22k gold and decorated with a hobnail texture – is what enables calibre 2160 to maintain its thin profile, and it allows an unobstructed view of the entire movement. That includes a view of the Magic Lever winding mechanism – invented by Seiko more than half a century ago and widely appreciated for its robustness and efficiency. With a slow-beating 2.5Hz frequency, the movement delivers a healthy 80-hour power reserve. 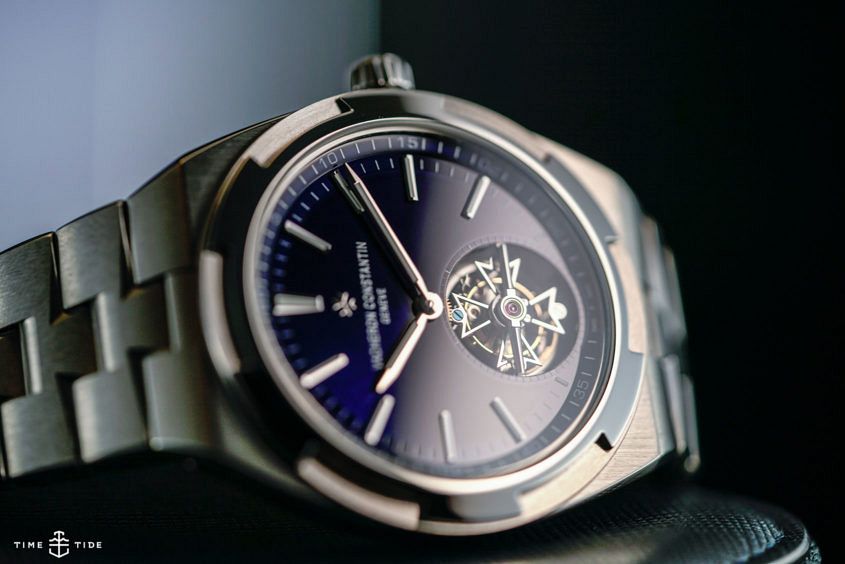 The Overseas Tourbillon, like all other models in the collection, is supplied with two straps (alligator and rubber) and a steel bracelet with a built-in extension system. Hidden under the lugs, the quick-release mechanism is very user-friendly – a tiny sliding tab that you don’t have to dig for with your fingernails.

Vacheron Constantin – often regarded as one of the more conservative brands – was an early adopter not only of quick-release interchangeable straps but in offering multiple choices as part of the standard package. As the first in the Richemont Group to do so (if my memory serves me correctly), it pioneered what is becoming increasingly the norm – and not before time. (How many of us truly enjoy paying a lot extra for the privilege of having alternative straps?)

And that’s the thing about the Vacheron Constantin Overseas Tourbillon: it’s not “the obvious” (it’s a tourbillon in a sporty, steel watch; it’s a Vacheron tourbillon in a simple watch) and it’s all the better for that. The price is not low, but within its category it represents good value – and those three straps certainly add more. Dress it up or dress it down, it has all the makings of a modern classic.