When you think of microbrands, a clear picture starts to form in your mind pretty quickly. A vintage-inspired diver, powered by a Japanese NH35 movement, perhaps? Not only is this formula wildly successful, it’s become somewhat of a trope. Its popularity is justified, and it’s a wonderful way to bring fresh blood into the watchmaking world, however it perpetuates the notion that innovative, technical achievements in both design and function are reserved for the mighty brands with wealth to spare and centuries of experience. 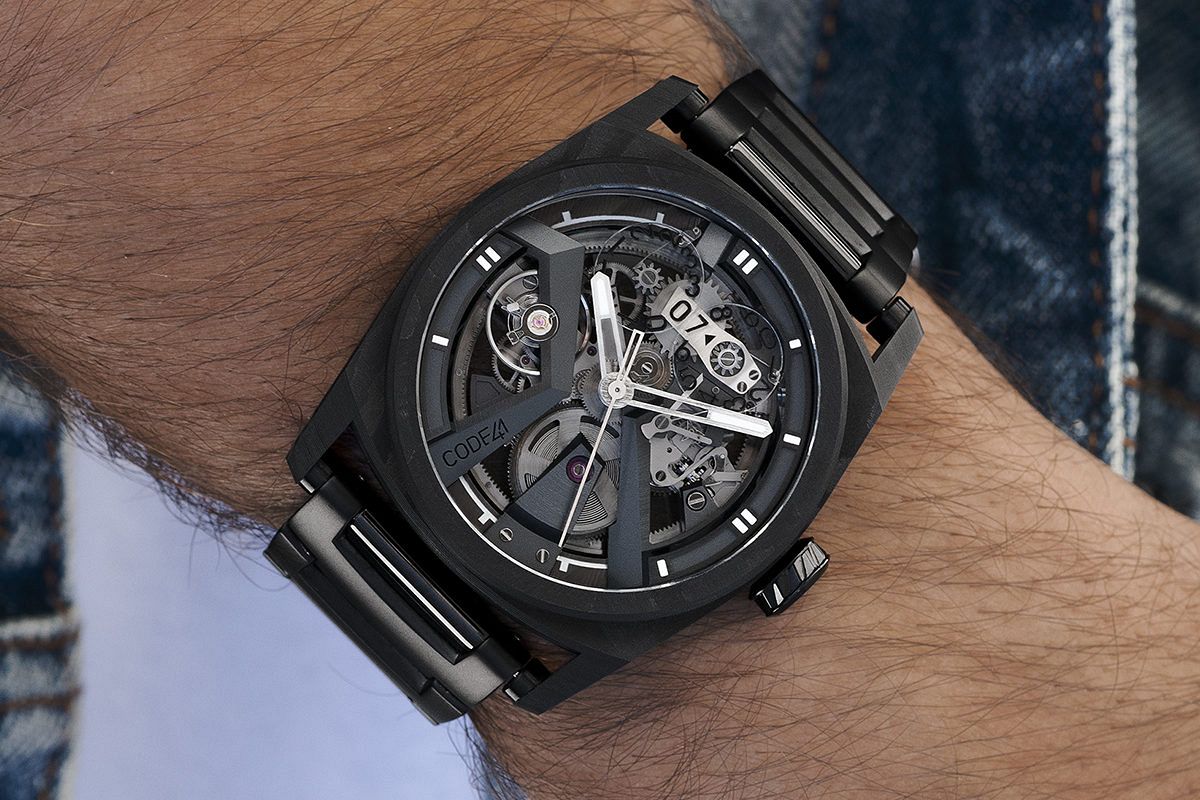 CODE41 are here to reassure us that trends aren’t taking over the industry, and there is still room for smaller brands to prove that they can be as clever as the big boys, without the exorbitant price tags. Their Anomaly-01, which is still available to order, used the well-established crowdfunding method to generate hype and brand awareness for an affordable, albeit visually striking watch with a Japanese Miyota movement.

However, where most microbrands would build on that success slowly, the Swiss innovators have gone all-out on producing several variations of an exhilarating, tech-focused wristwatch, complete with a proprietary automatic movement. 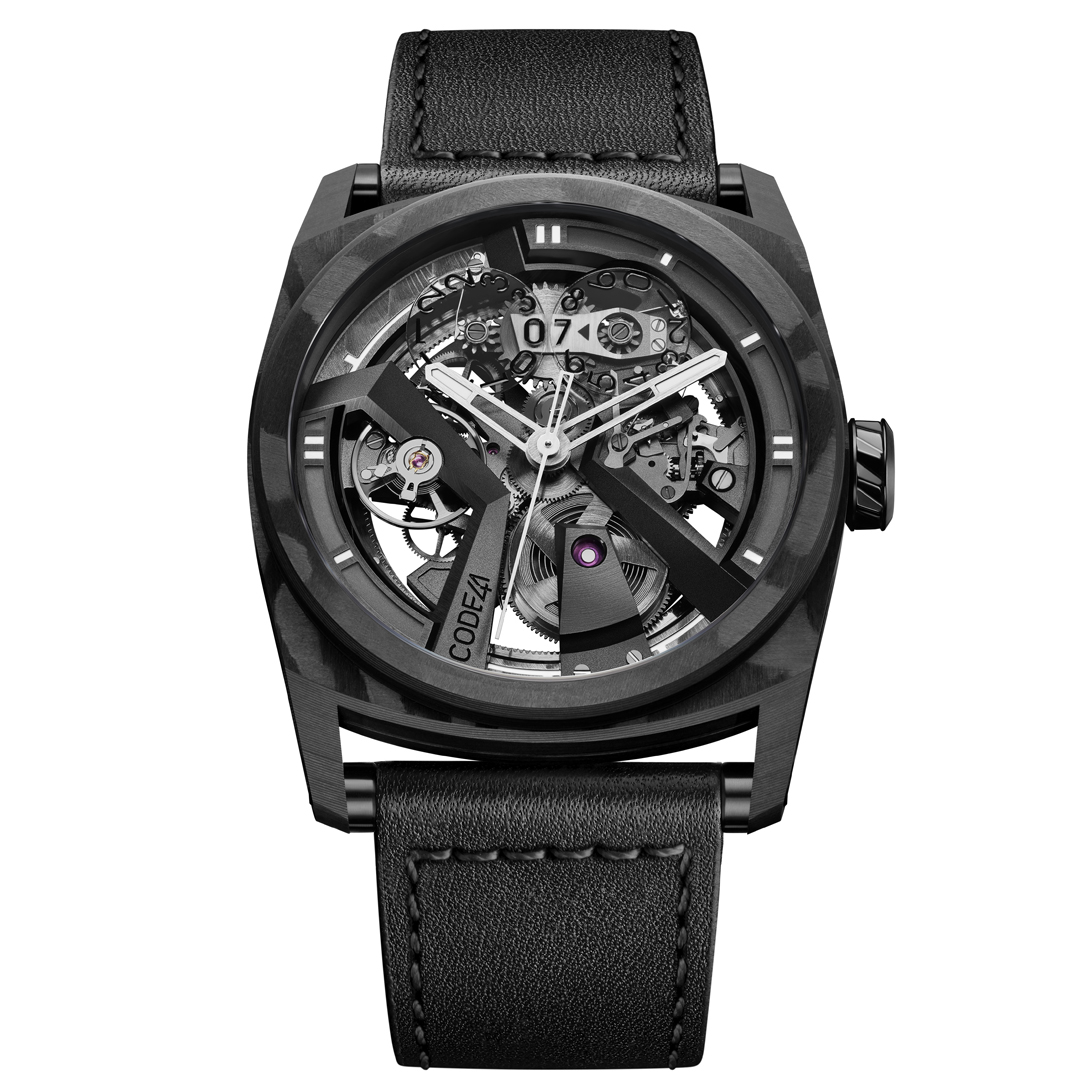 Within the last decade or two, an obsession with in-house movements has crept up on watch enthusiasts. It seems to stem from a desire for originality, and the exclusiveness that comes from patented ideas and designs. While CODE41 don’t manufacture their own movements, for the X41 project, they turned to Timeless Manufacture. Nestled in the Jura Mountains, it’s hard to find much information about the Swiss movement producers, however their instagram is full of tasty macro shots, which is all you really need to know that they mean business. The X41’s movement is completely bared from every viewing angle, especially thanks to the peripheral oscillating weight which winds the watch just as efficiently as a traditional rotor, but leaving the magnificent view and saving a bit of weight. 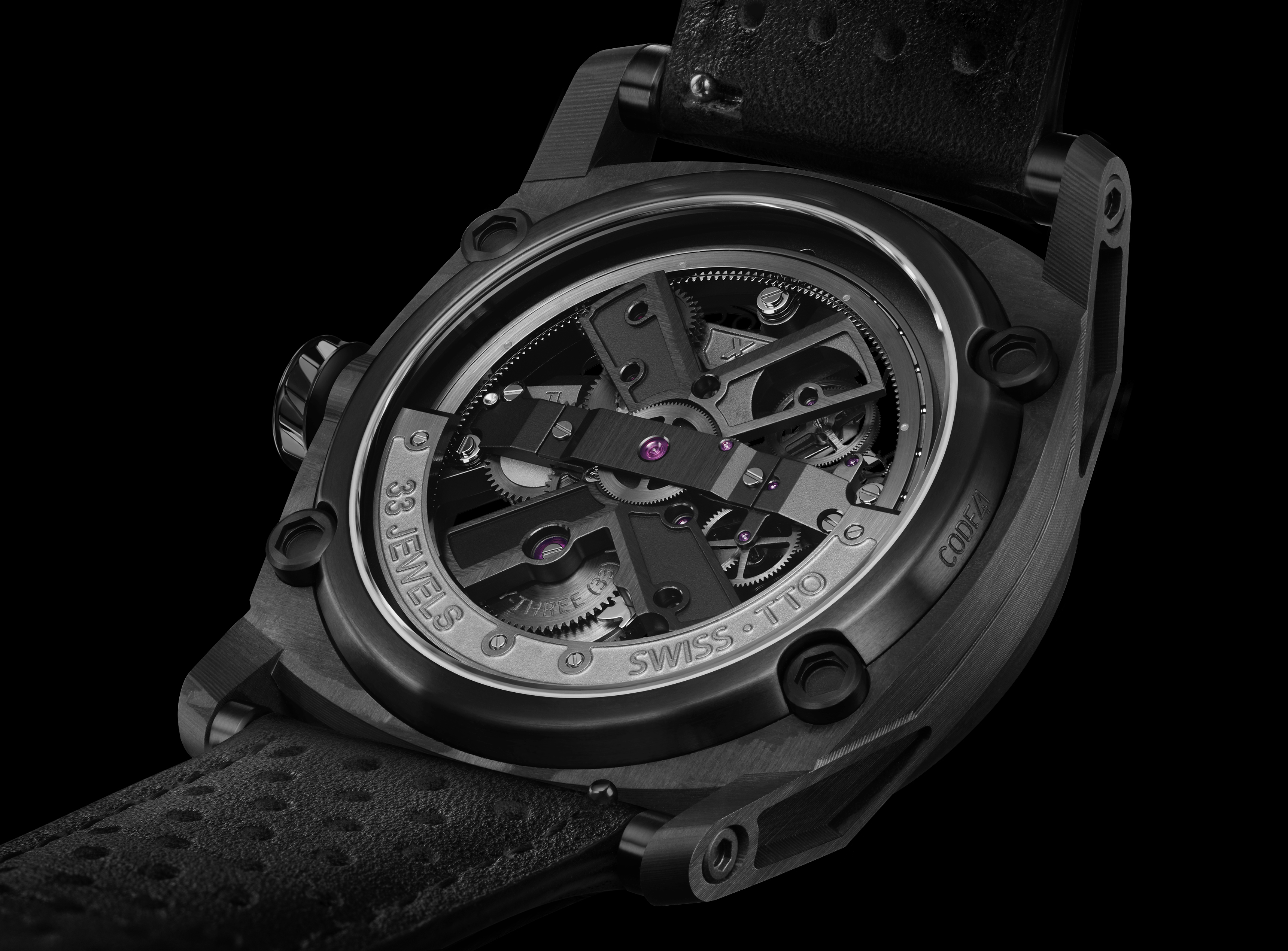 The weight saving doesn’t end there, either. While the regular X41 uses a lightweight titanium case, the newest AeroCarbon variant is made of high-density carbon fibre, which is more water resistant than other carbon fibre cases on the market. Although the carbon fibre block is manufactured in France, it gets machined into the case components in China, which opens up the next great thing about CODE41. 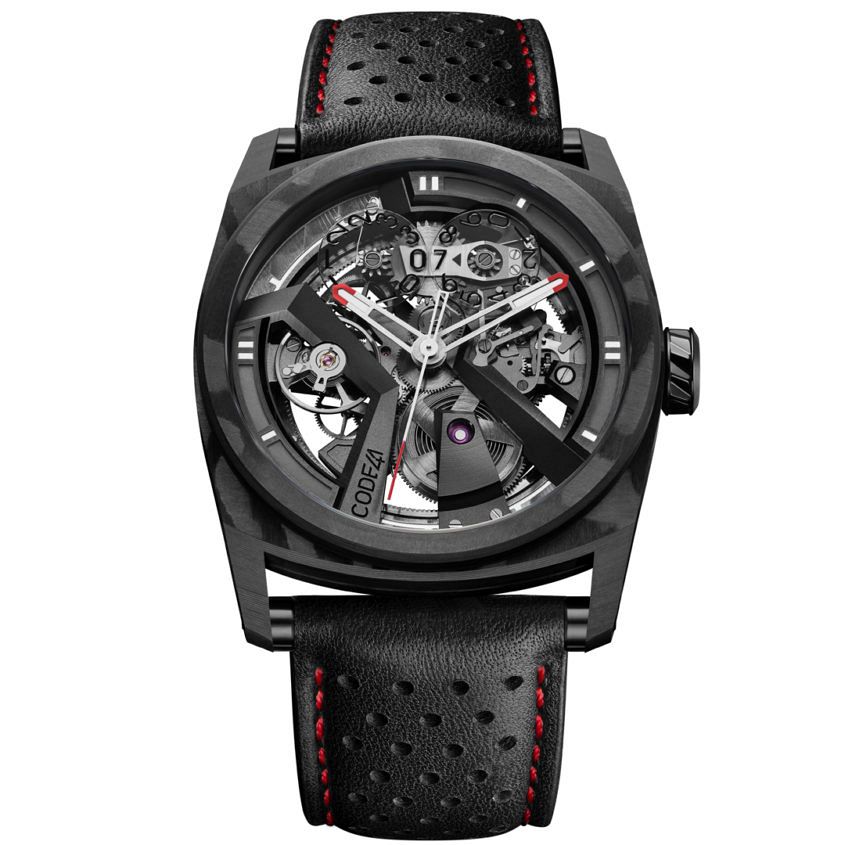 A lot of companies use “direct marketing” as a reasoning for why their prices are so low, “cutting out the middle man” to bring you the best product at its most affordable. CODE41 go one step further and list the exact cost of each component, and where it was produced, so you know exactly what you’re getting when it shows up at your doorstep. Although 90 per cent of the watch’s cost comes from Switzerland, easily surpassing the 60 per cent requirement for the “Swiss Made” label, you won’t find any such markings on the X41’s dial. 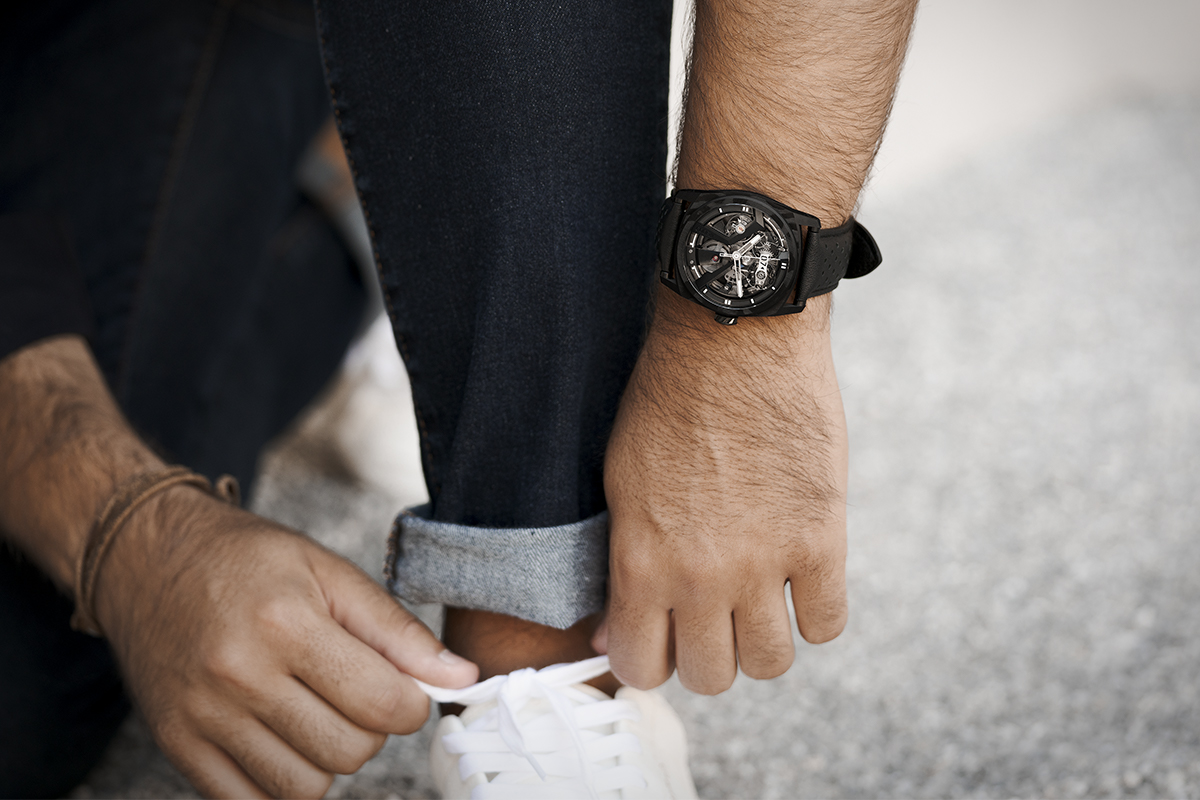 Visually, the X41 AeroCarbon is particularly adrenaline-pumping. Its skeletonised dial exposes the aggressive, angular designs of the movement, which was built to be marvelled at, and its differing hues of smoke-grey and charcoal-black within the movement’s materials echo closely the undulating textures within the carbon fibre case. At 42mm in diameter it is not a small watch, especially as spindly lugs creep out from the edges of the case, only to jut back in on the 24mm strap, increasing the complexity and furthering the sense that this is an intricate, mechanical machine.

The stark contrast to the broken-up white indices, alongside white hands, with or without red tips, means that the watch is much more legible than something so complex and dark has any right to be. The peripheral weight can occasionally be seen spinning from the front, but that won’t stop you from flipping it around to stare at the rear sapphire display back. 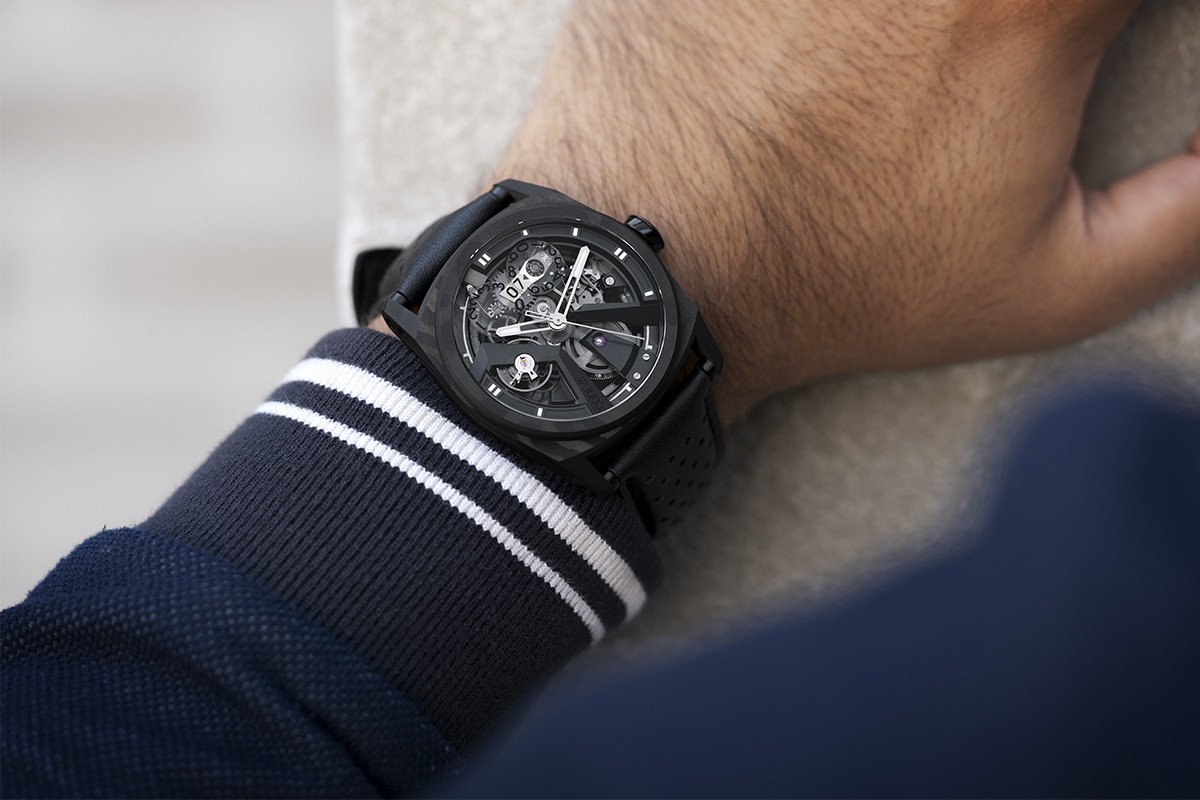 Hovering around the $9000AUD area (the prices is quoted on the preorder page at $5,740USD) is more proof that CODE41 aren’t shying away from lofty competition, however these are the kind of looks and technologies you could expect to pay four times that price for. A movement that’s hand-finished to this degree rarely comes around at this price point, and if you want something truly unique while supporting smaller businesses, then the X41 AeroCarbon is certainly in a league of its own. To preorder the CODE41 X41 AeroCarbon,  hit this link. 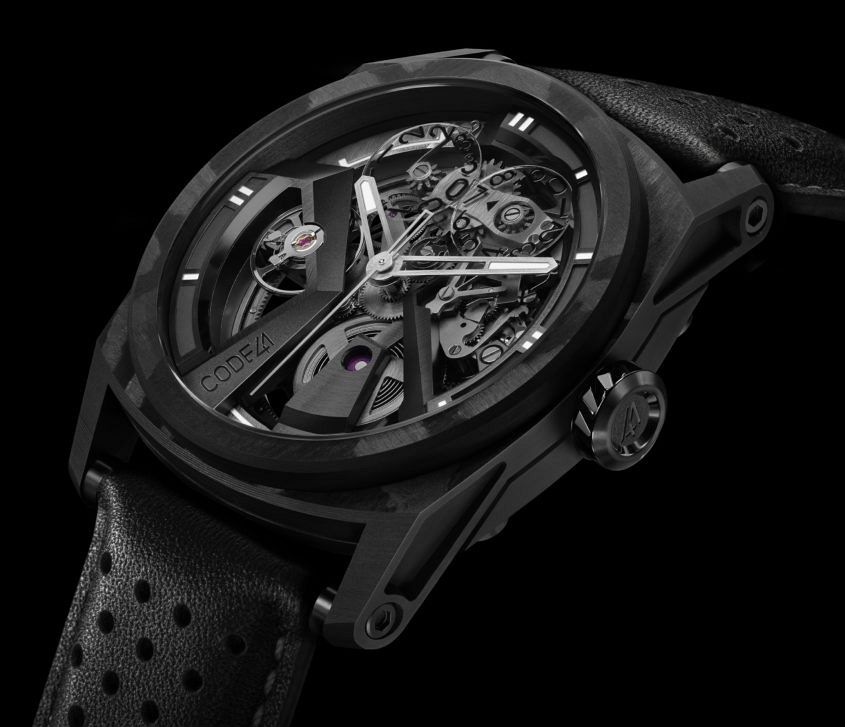