This morning a new generation of Omega Speedmaster Professionals were announced, but that was not the only legendary chronograph revival and rejuvenation introduced today. Zenith has unveiled a new tribute to one of their chronographs from 1969: the Zenith Chronomaster Revival A385 Gradient Dial. Game-changers in their day, Zenith produced three watches that were not only powered by a then rare high-beat movement, but they also had gradient dials – which Zenith claims was the first smoked dials for the industry at large. Today the Zenith Chronomaster Revival A385 brings back the smoked brown gradient dial variant of the initial trio. 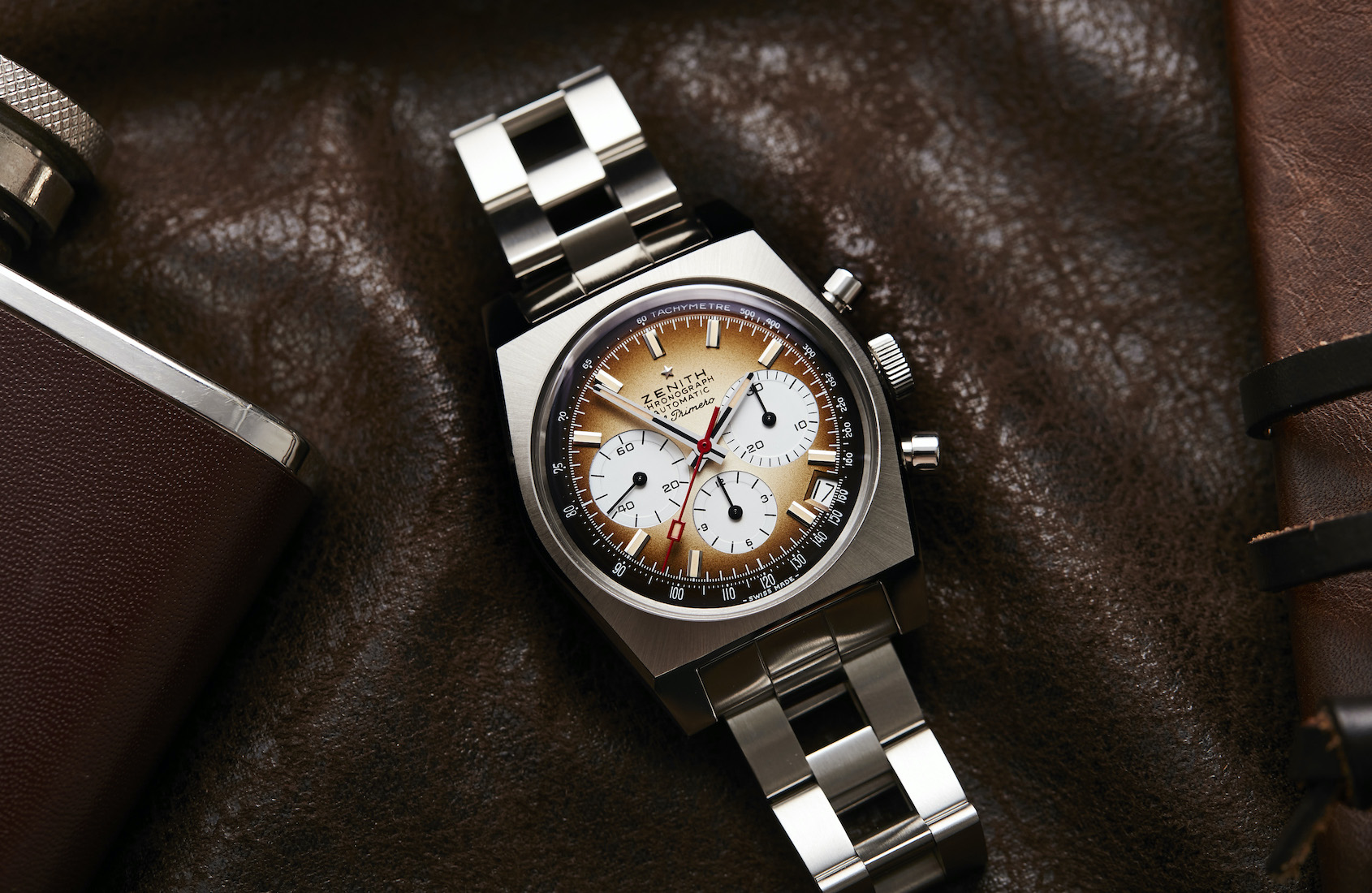 The Zenith El Primero movement is a horological legend in the watch world – it’s schematics, stamps, and fabrication machinery saved by Charles Vermot and his great defiance and foresight. What could have been lost to the quartz crisis was rescued and the El Primero triumphantly returned thanks to Vermot’s preservation (against orders) of the equipment needed to produce it once again. This meant modern collectors could enjoy watches powered by the first high-beat automatic chronograph movement – a movement so respected even Rolex used a modified version of it in its Daytona watches for some time. 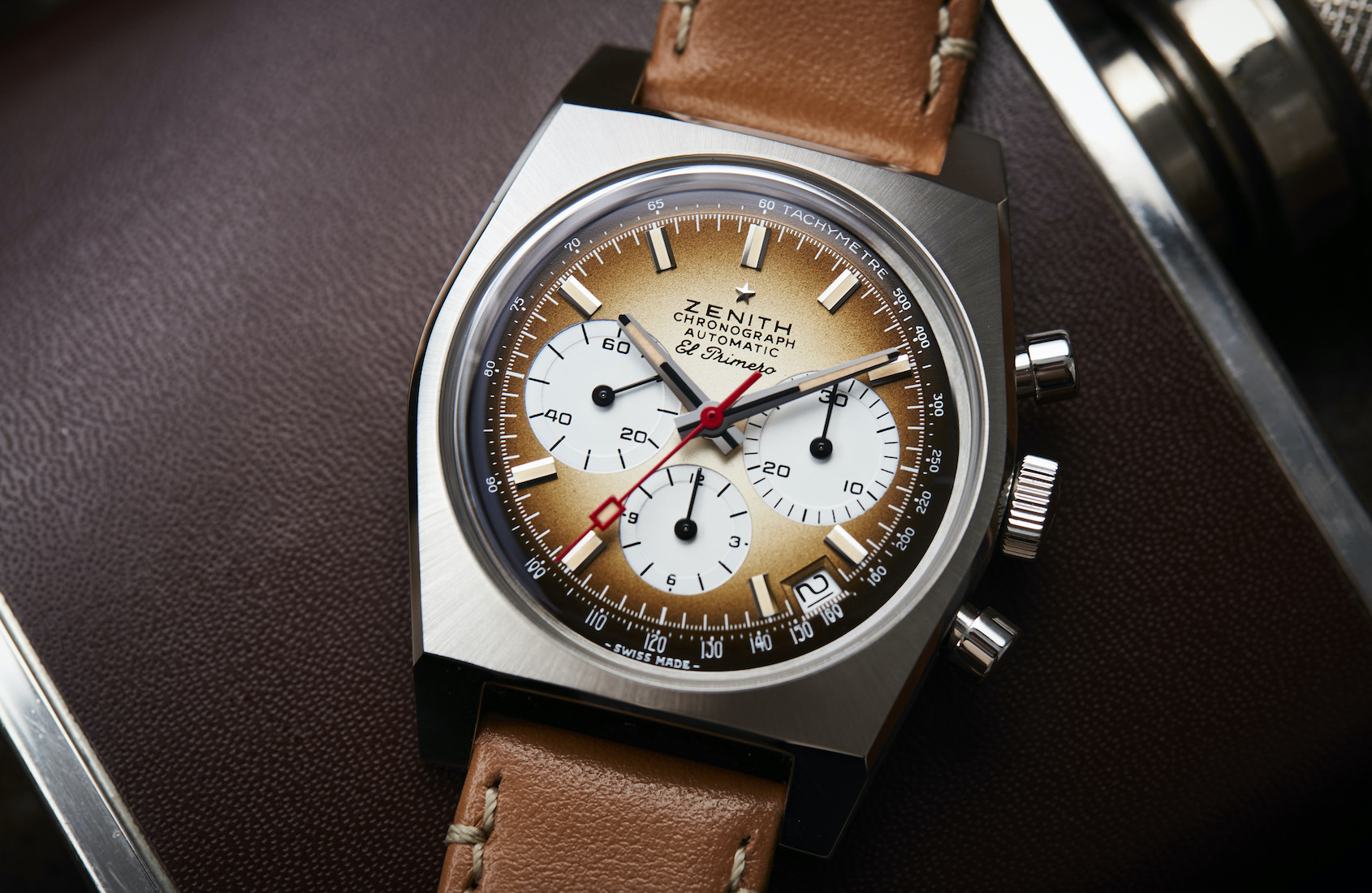 The movement has really been put to the test over the years, and has held up incredibly well. In fact, the El Primero faced a daring test and challenge back in 1970 during Zenith’s “Operation Sky”. According to Zenith, “This extreme test consisted of strapping the watch to an Air France Boeing 707’s landing gear on a flight from Paris to New York to test its resistance to external aggressions such as drastic temperature fluctuations, wind force and changing air pressure. Upon landing, the watch was still functioning perfectly.” 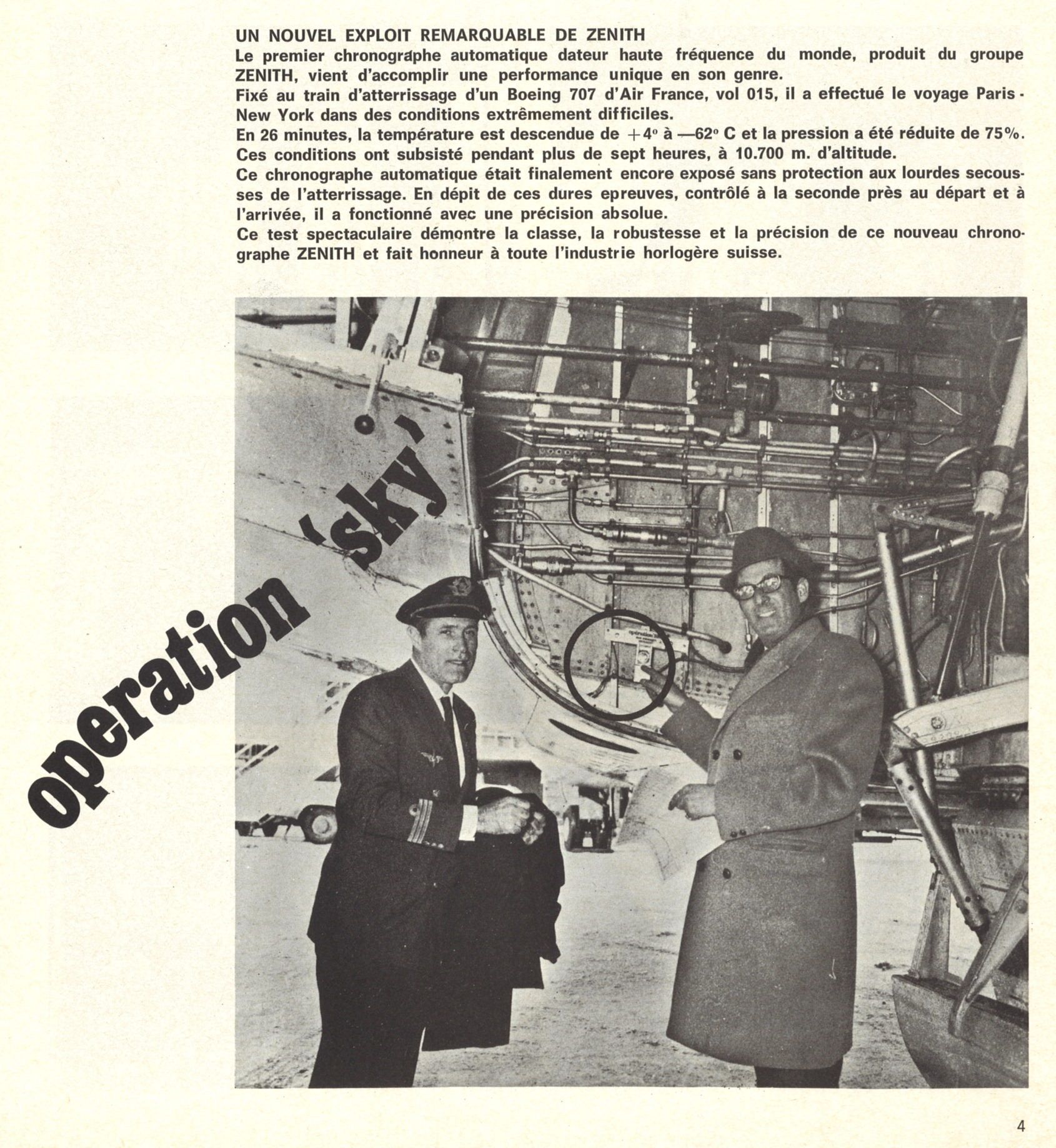 It was a true victory for not only the watchmakers who had developed and assembled the mechanical marvel, but mechanical watchmaking as a whole. For a brief moment, it would serve as a testament to the durability of mechanical movements. At the time, quartz calibers would not have survived such a challenge – then incapable of sustaining the harsh temperature fluctuations it would have faced in “Operation Sky”. 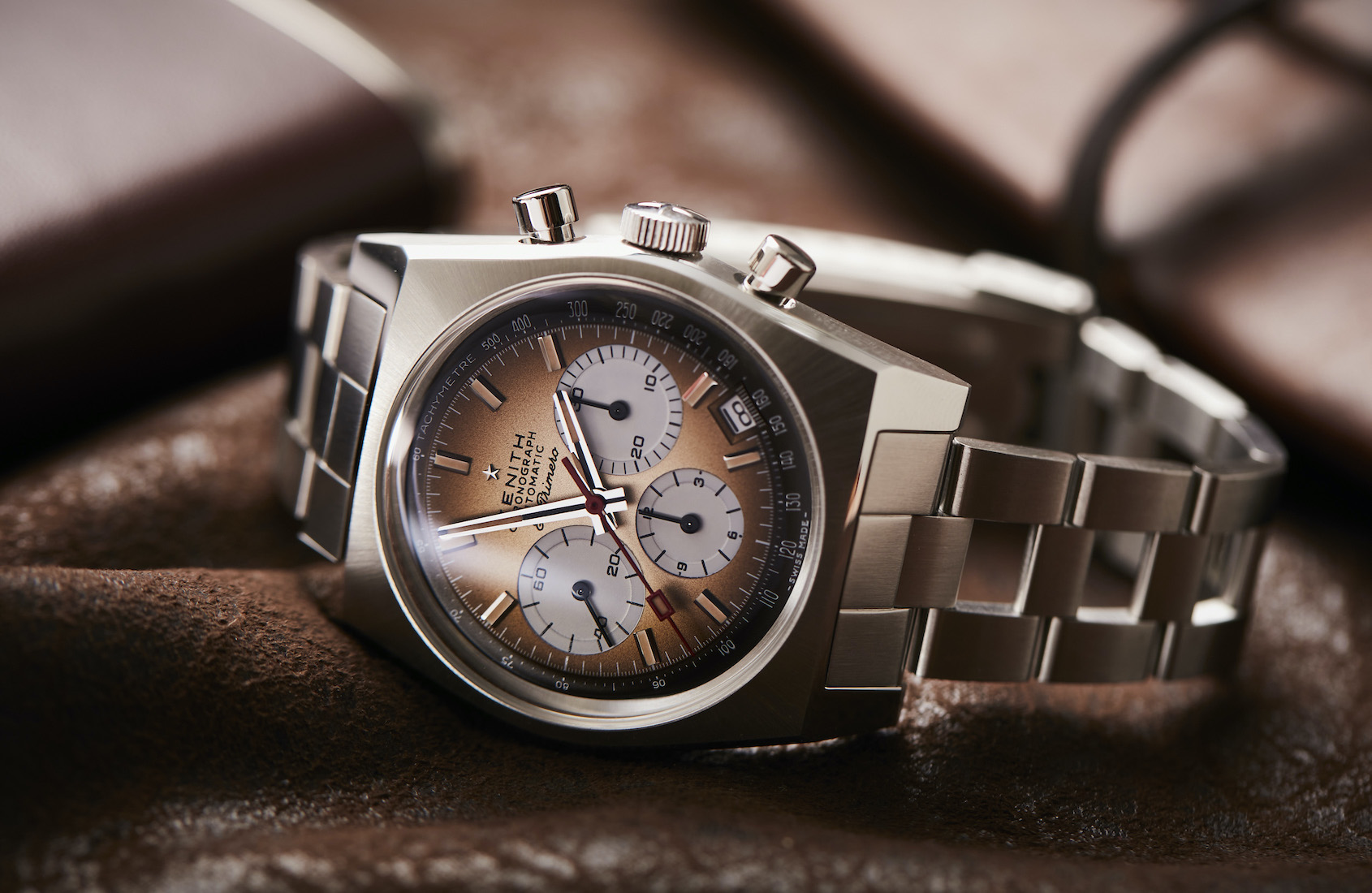 Like the meticulously preserved movement, Zenith has worked to recreate a practically 1:1 revival of the historic chronograph. Excluding the sapphire crystal protecting the dial, and the exhibition caseback that provides a window into the legendary caliber, every component has been reversed engineered to meet the exact measurements of the original – down to the pushers of the chronograph. 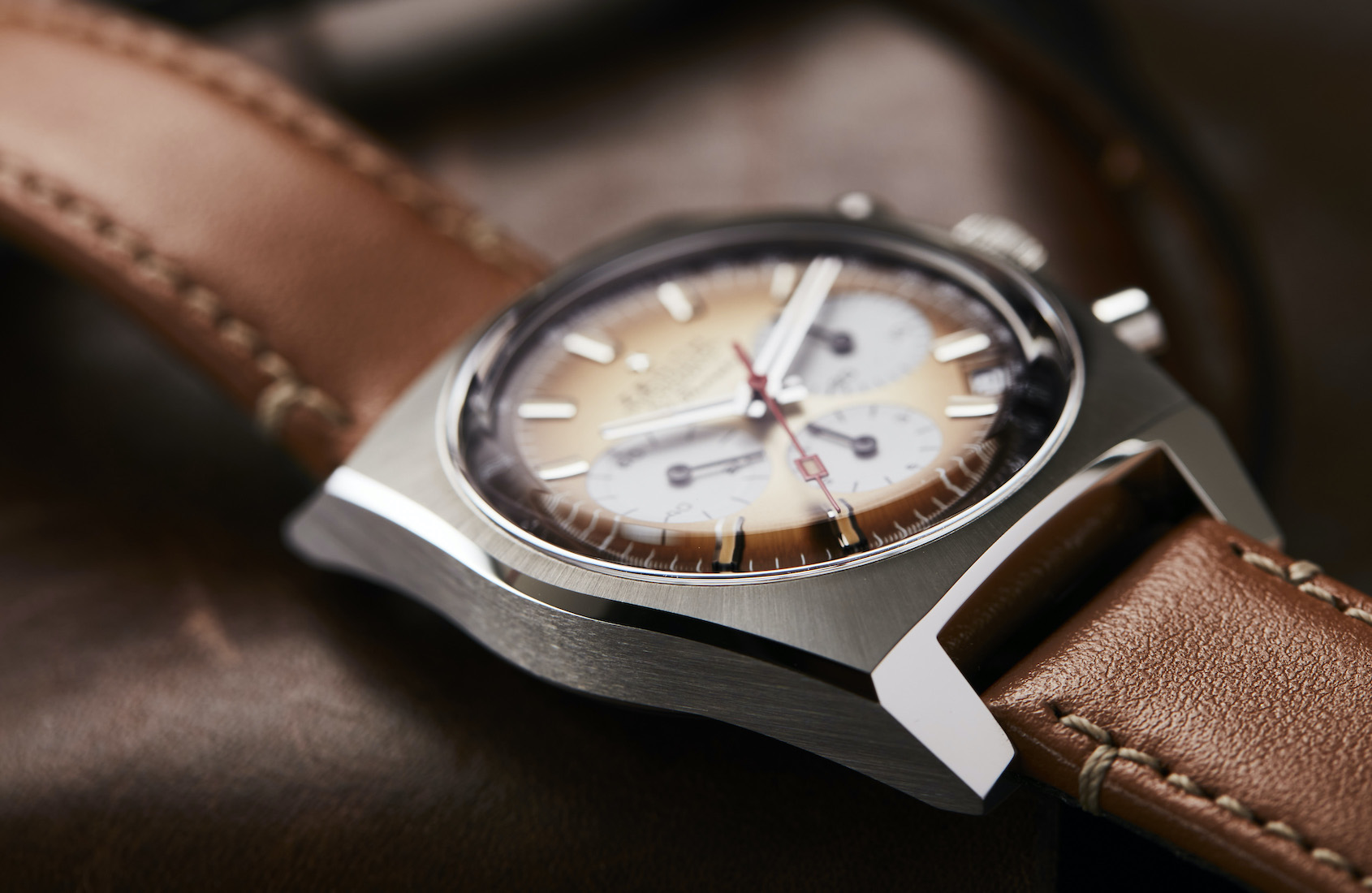 The watch maintains its original size, its tonneau stainless steel case still a classic 37mm in diameter and has a respectable water-resistance of up to 50 metres. It’s front is completely satin-brushed until the faceted edges of its case side and lugs that are rendered in a contrasting mirror polish. 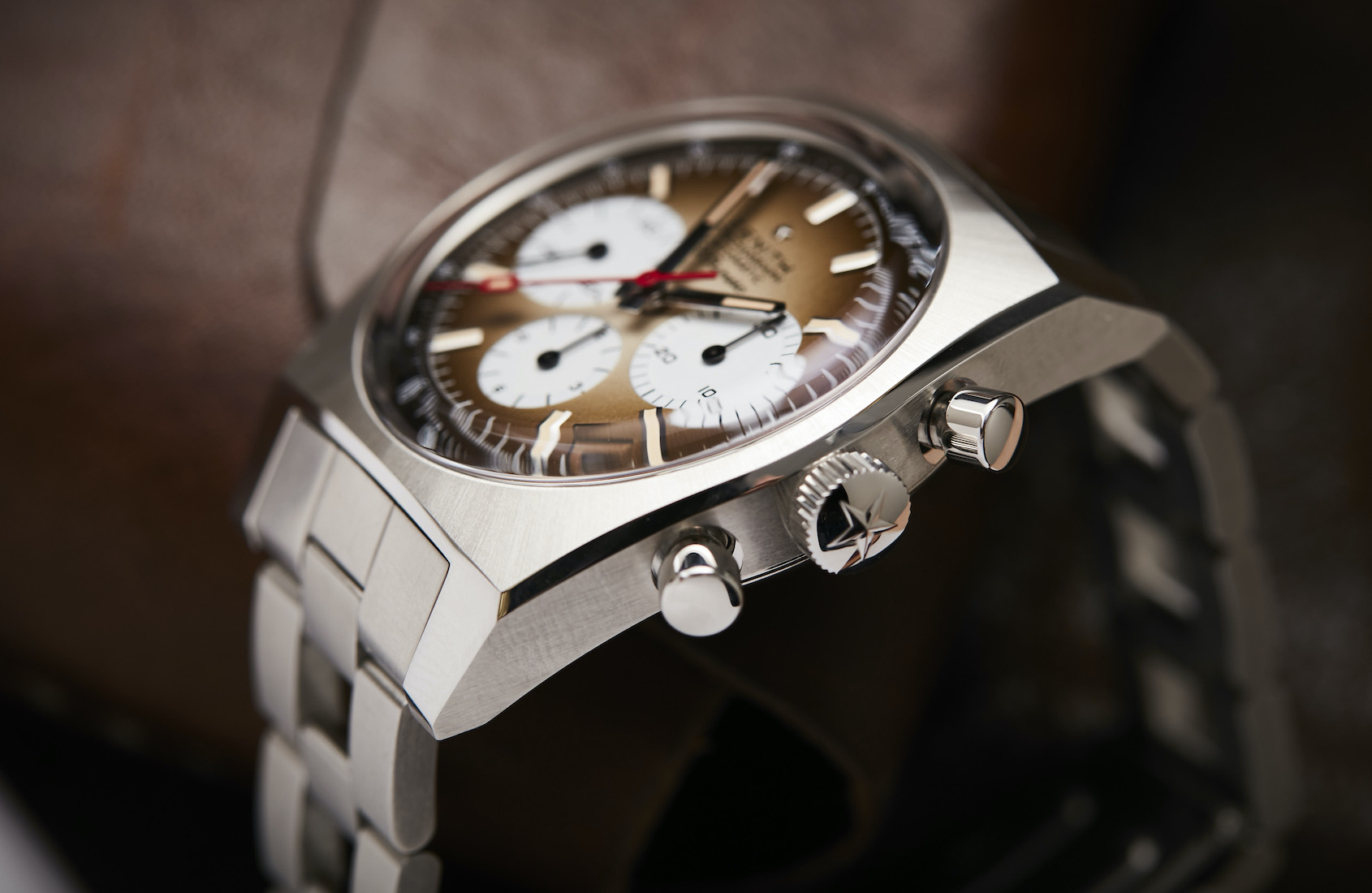 The combination of finishes reflect the sporty nature of the watch, with a hint of elegant late 60’s flair in its polished sides and edges. 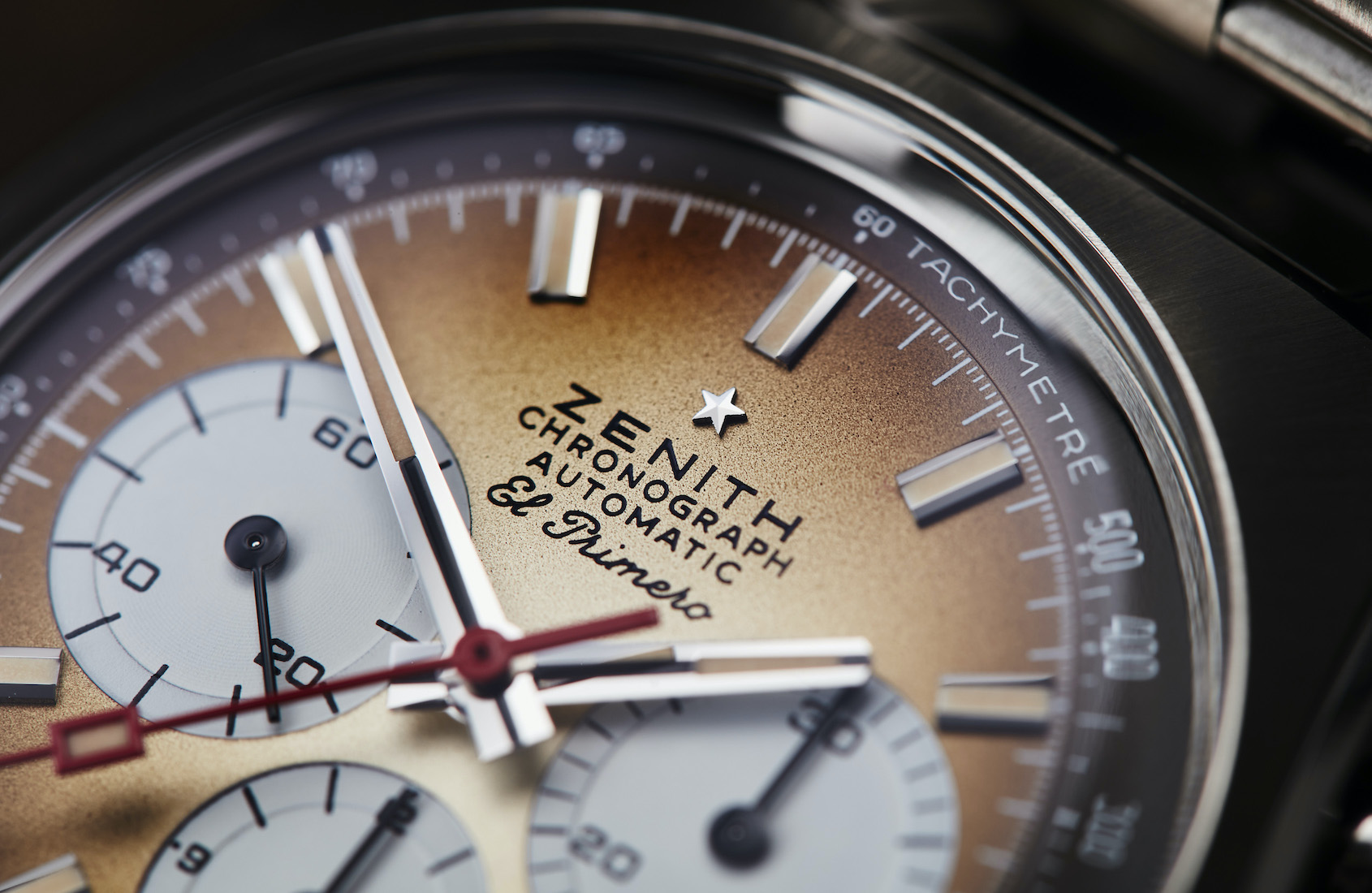 The dial works to mimic the tone and texture of the original, faithfully executing the smoked gradient first seen back in 1969. The closer you look to its centre, the brighter the brown takes form. In my opinion its colour ranges from a dry-sand like beige to a darker brown seen when the ocean kisses the beach with its tide. The concentric gradient works well for the chronograph layout, its darker edges increasing the legibility of the printed outer minutes track and tachymeter scale. 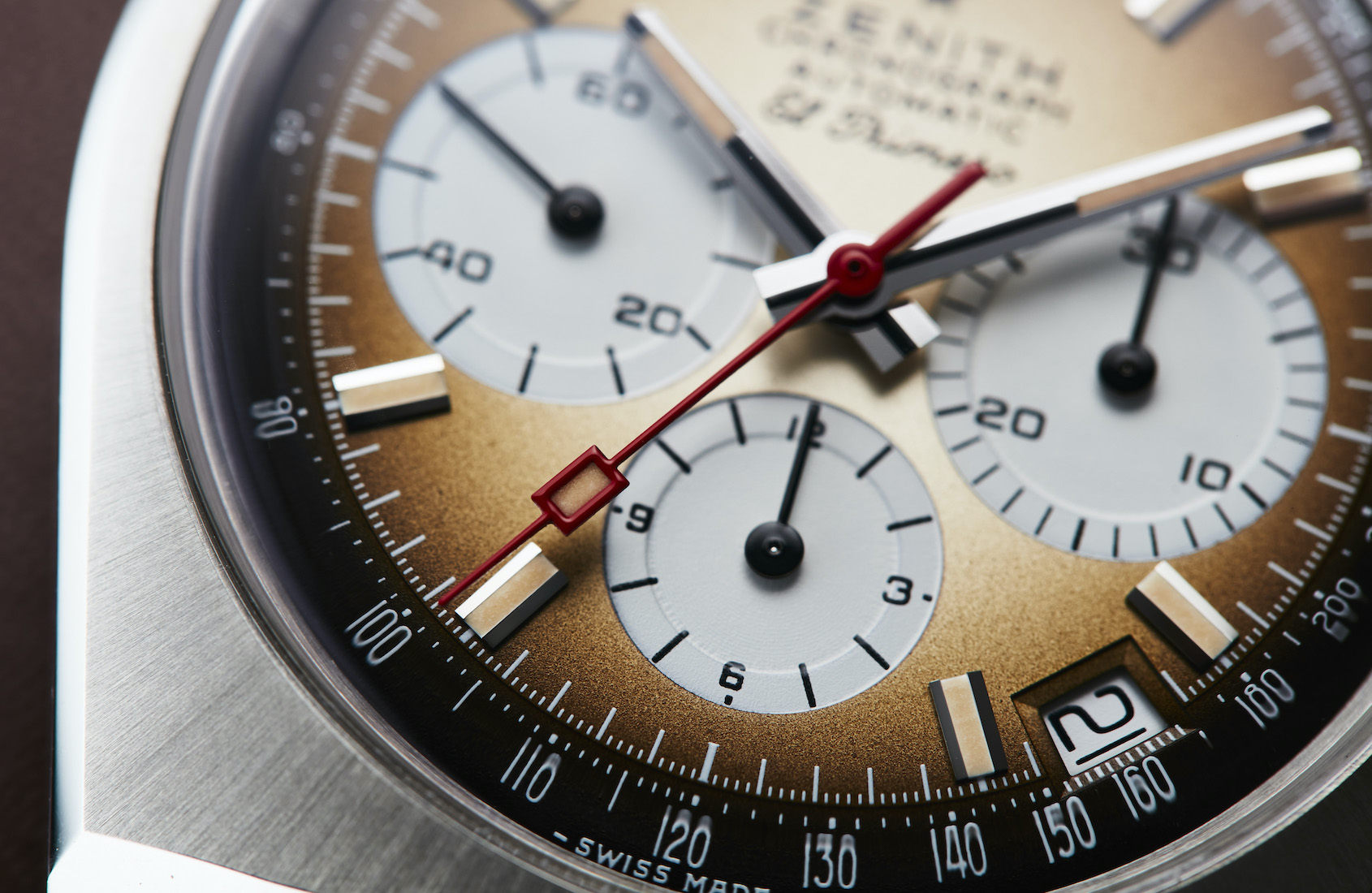 The white chronograph registers are also very easy to read and give the watch a nice panda aesthetic we all know #watchfam loves. The elapsed hours and minutes can be found at six and three, with a running seconds register placed at the nine position. 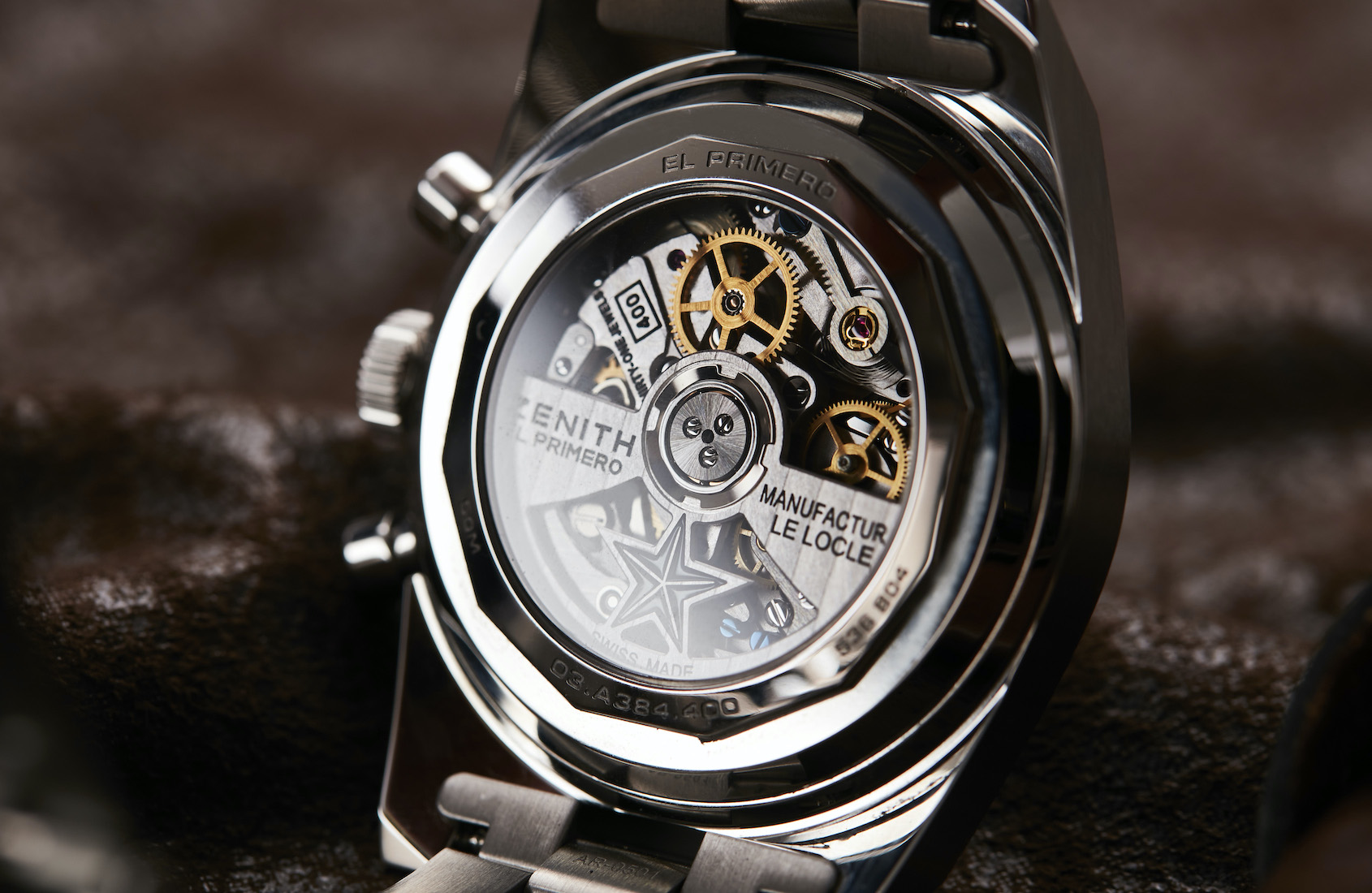 It goes without saying the watch is powered by Zenith’s El Primero movement. This particular caliber, the El Primero 400, is a high-beat automatic chronograph with a calendar complication and column wheel architecture that provides butter-smooth tactile experience when actuating the start and stop/reset pushers. It beats at 5hz, or 36,000 vph, which not only increases the sweeping effect of the second hand and theoretically ensures the watch remains more accurate over time. The movement has a minimum power reserve of approximately 50 hours, which is pretty good considering its very high beat rate. 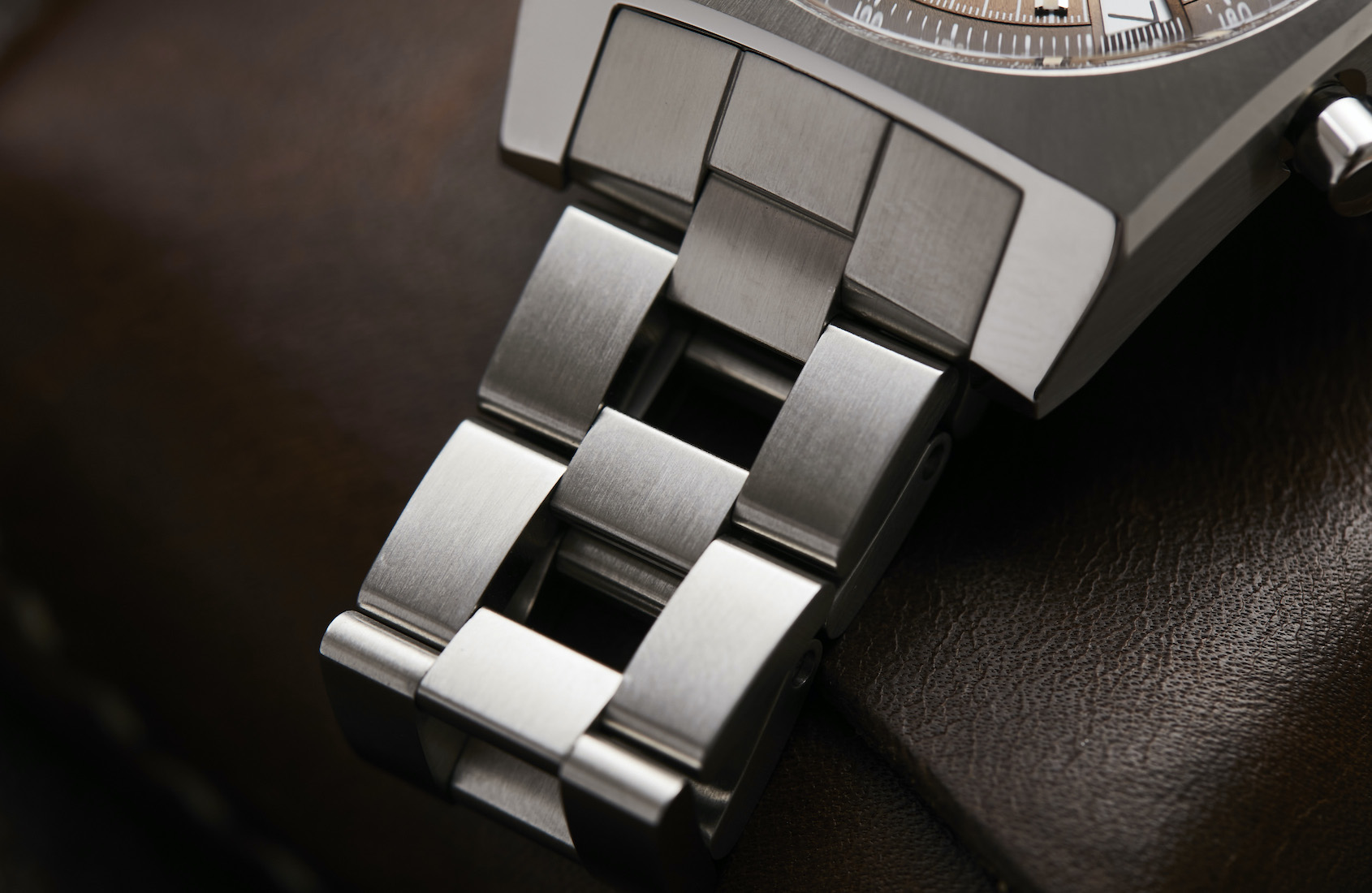 The Zenith Chronomaster Revival A385 Brown Gradient Dial is available in two configurations. Buyers will have the option to get the watch with a brown calfskin leather strap, with protective rubber lining, or on the famous ladder style stainless steel bracelet distinct to the Zenith brand – and period correct to its release back in 1969. 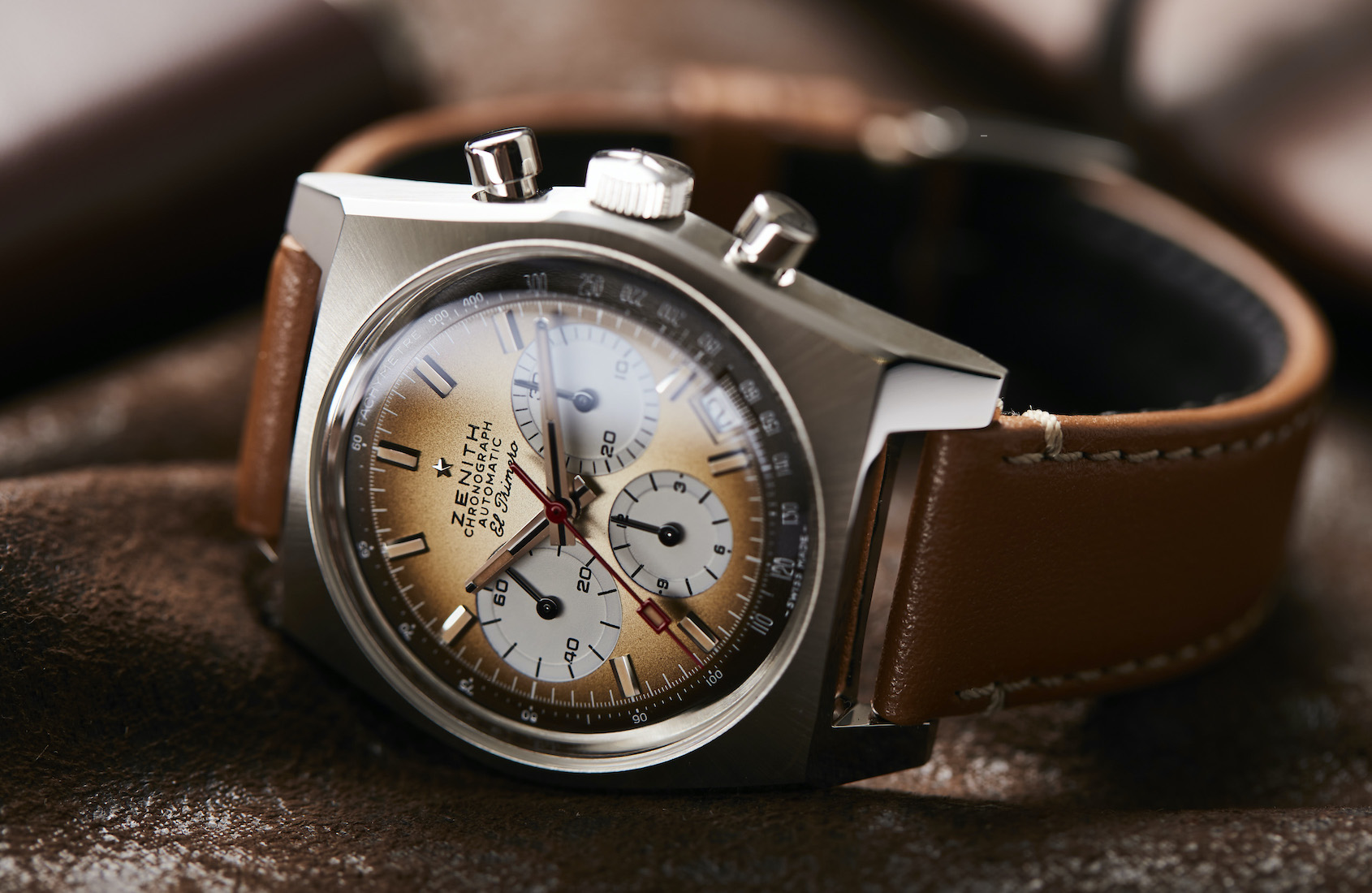 While both are great options, if I were buying the watch I would want to splurge for the bracelet configuration due to its distinct and attractive aesthetic, seasonal versatility, and the reality that a brown calfskin strap can be sourced rather easily if you wanted to eventually swap the leather look in. 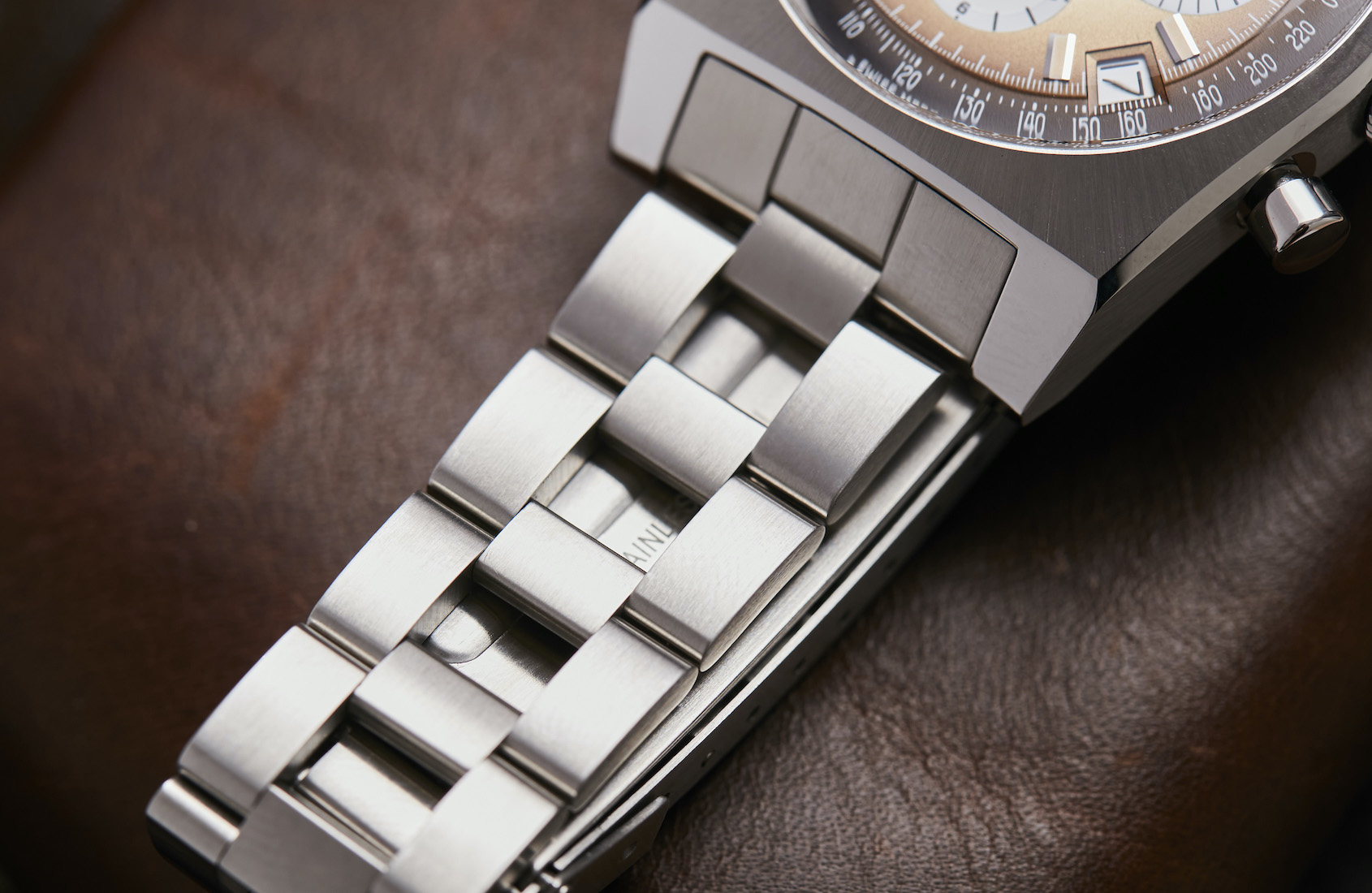 The Zenith Chronomaster Revival A385 Brown Gradient Dial is available now from Authorized Dealers in-stores and online for purchase. Full specifications and pricing below.

Made in partnership with Zenith. However, the opinions expressed in this article are our own in accordance with our Editorial Policy.