Editor’s note: Well, this little brand from London that thought it could, sure has convinced us of their seriousness over the last six months. It started with an email to us practically begging to donate a watch to the Watch & Act! Auction in aid of the Australian bushfires. It was a bit late in the game, but the fit was too good to not make it happen. Jonny had us at upcycled fire hoses. So we did it, we put it in. The watch sold high. Then the Valiant Red watch sold out, generally speaking. The fire emoji is appropriate on several levels, and if you’re interested, rest assured, we’re back in stock. To see it in the metal, check out this video.

If there was an early candidate to be stocked on our marketplace, it was William Wood Watches. And since then, there’s more news on the Australian front. We can’t tell all right now. But we can say that a commemorative piece with the Metropolitan Fire Brigade is in the works. To find out how you can order this, please email sales@timeandtidewatches.com None of this however is to steal the thunder from this pretty handsome new watch, the ‘Valiant White’. James, take it away … – AM

For this week’s edition of Micro Mondays, we’re taking a closer look at British watchmaker William Wood and their latest creation – the Valiant White. First, though, some context: William Wood epitomises what we like about microbrand horology. The small UK-based outfit, which was created to pay homage to its founder’s grandfather, a heroic British firefighter named William Wood, has been able to produce watches with a real inimitable personality and sense of purpose that focus on material upcycling and strong support of firefighters across the globe. As many T+T readers will recall, William Wood was one of the generous supporters of our ‘Watch & Act!’ World Watch Auction in aid of the Australian bushfire crisis, donating a piece unique, the Valiant ‘Watch & Act!’ Edition, which sold for $4800 USD. 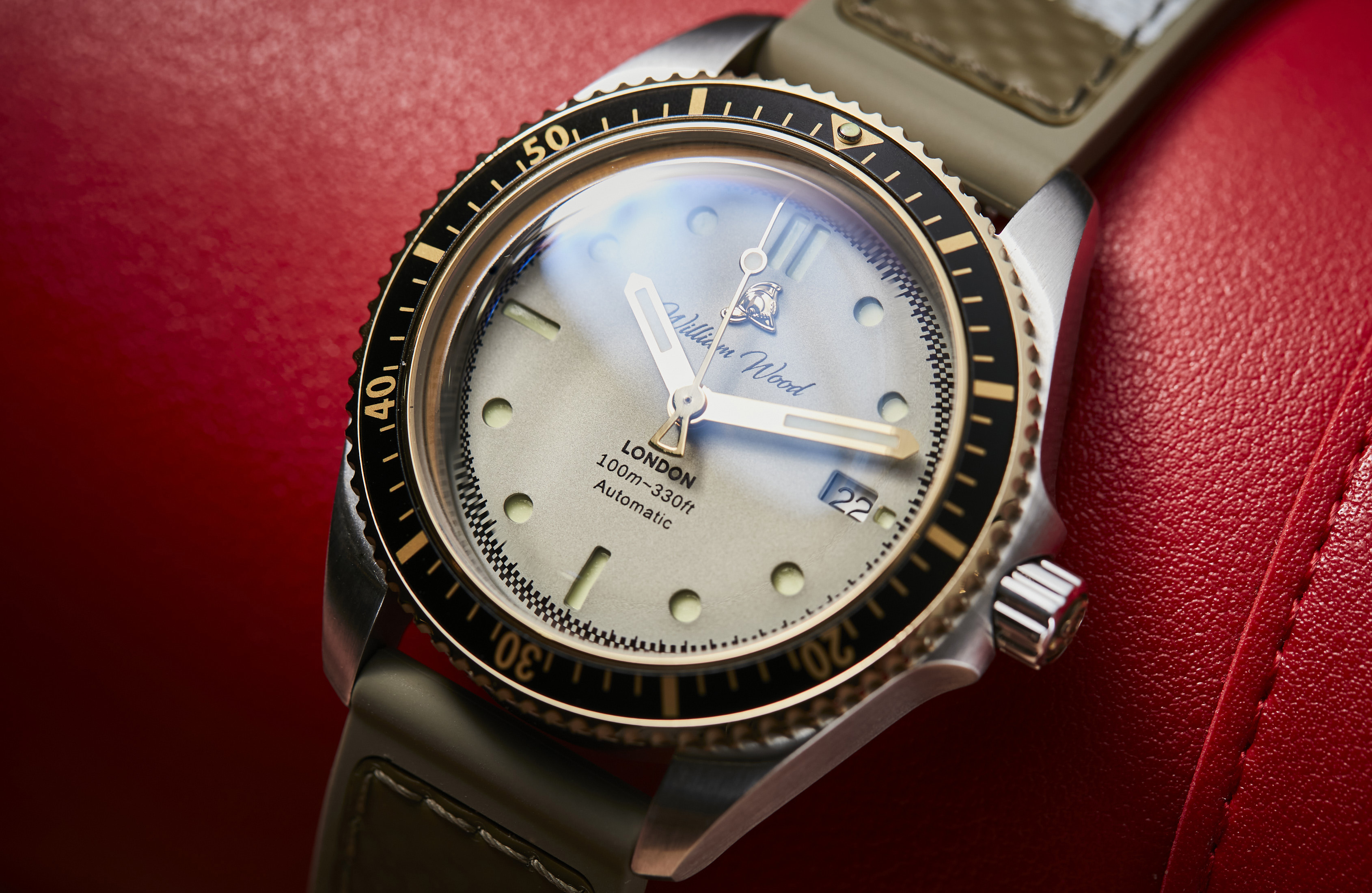 This new iteration of the watchmaker’s popular Valiant Collection, the Valiant White, differs from other models in a couple of key areas, and although the changes made are not overt or glaringly obvious, the resulting aesthetic makes this iteration, to my eyes at least, the nicest looking in the collection so far. 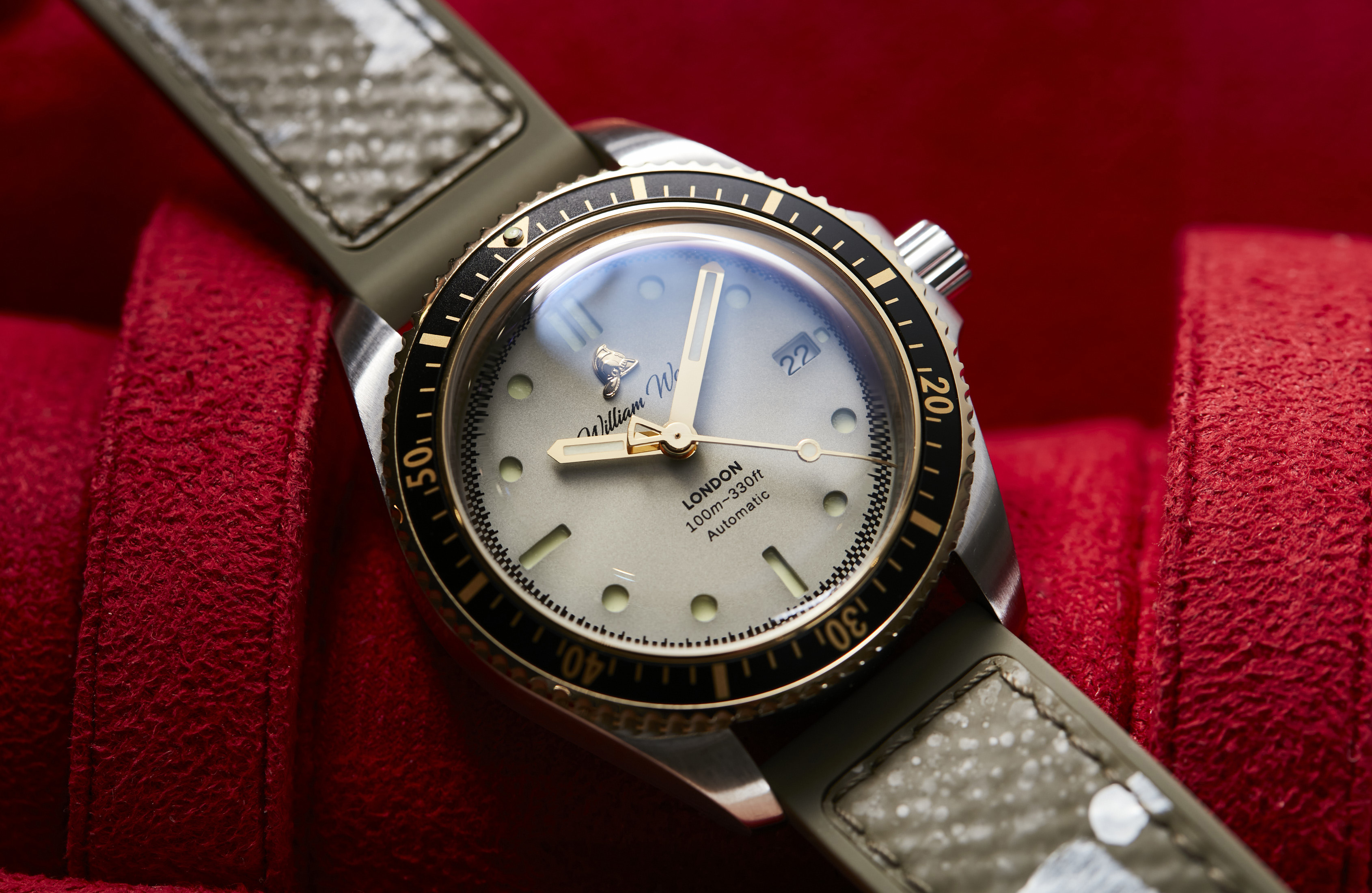 These subtle changes start with the vertically brushed stainless steel case. While its dimensions remain the same, measuring in at a bulky and purposeful 41mm across and 16mm thick, the unidirectional ratcheting steel bezel that sits atop the case is now finished in a yellow gold colour with a black aluminium bezel insert and complementing gold indices and numerals. That doesn’t sound like a groundbreaking deviation from other models, but as I alluded to earlier, the gold and black combo has given the watch a much more luxurious and even regal appearance, and it definitely contributes to a much stronger presence on the wrist. In the few days that I wore this watch, it garnered A LOT of attention, and certainly more than other William Woods I’ve worn in the past. The gold of the bezel also does a great job of complementing the crown insert, which is hewn from the brass of a 1920s British fireman’s helmet. 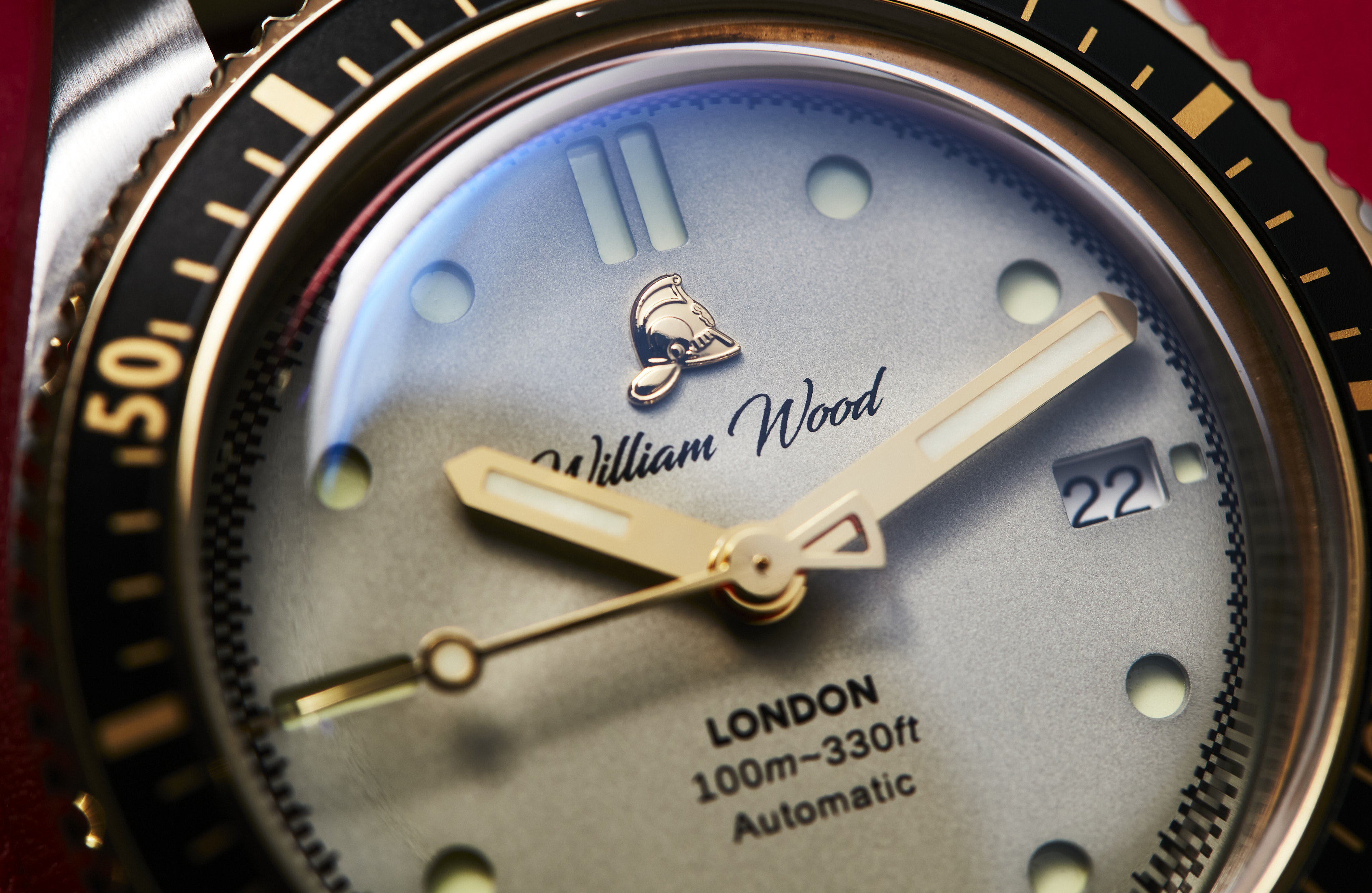 Anyone familiar with the Valiant Collection will have also noted that the dial of the White has undergone quite a few changes. For starters, and perhaps most curiously, it’s not white. No, despite the name, it’s actually a matt light grey colour with a fine granular finishing and, in combination with green Super-LumiNova filled indices that are recessed into the dial, it’s a very handsome-looking thing. The accompanying stainless steel handset has also changed, and now features the same yellow gold finishing as the bezel, which only enhances the impression of opulence. However, the grandiose appearance has come at a cost, with legibility being noticeably impacted by the lighter, more bling visuals. 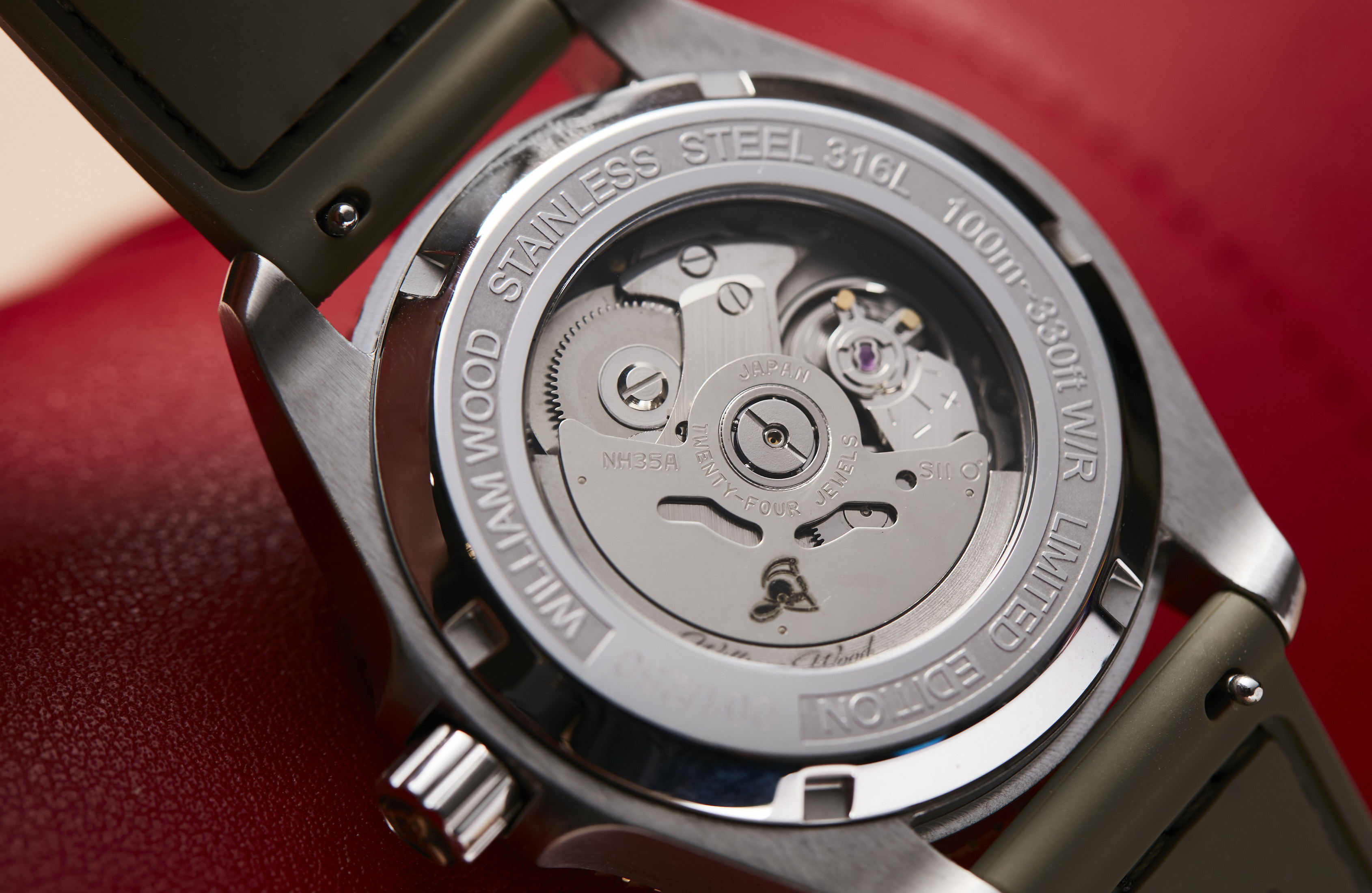 As is the case for the rest of William Wood’s first mechanical collection, the Valiant White can be had with a choice of either a Swiss-made ETA 2824 or a Japanese-made Seiko NH35 movement. The model I wore came equipped with the latter, and performance and reliability from the self-winding calibre was exactly what you’d expect from Seiko, providing roughly 41 hours of power reserve. 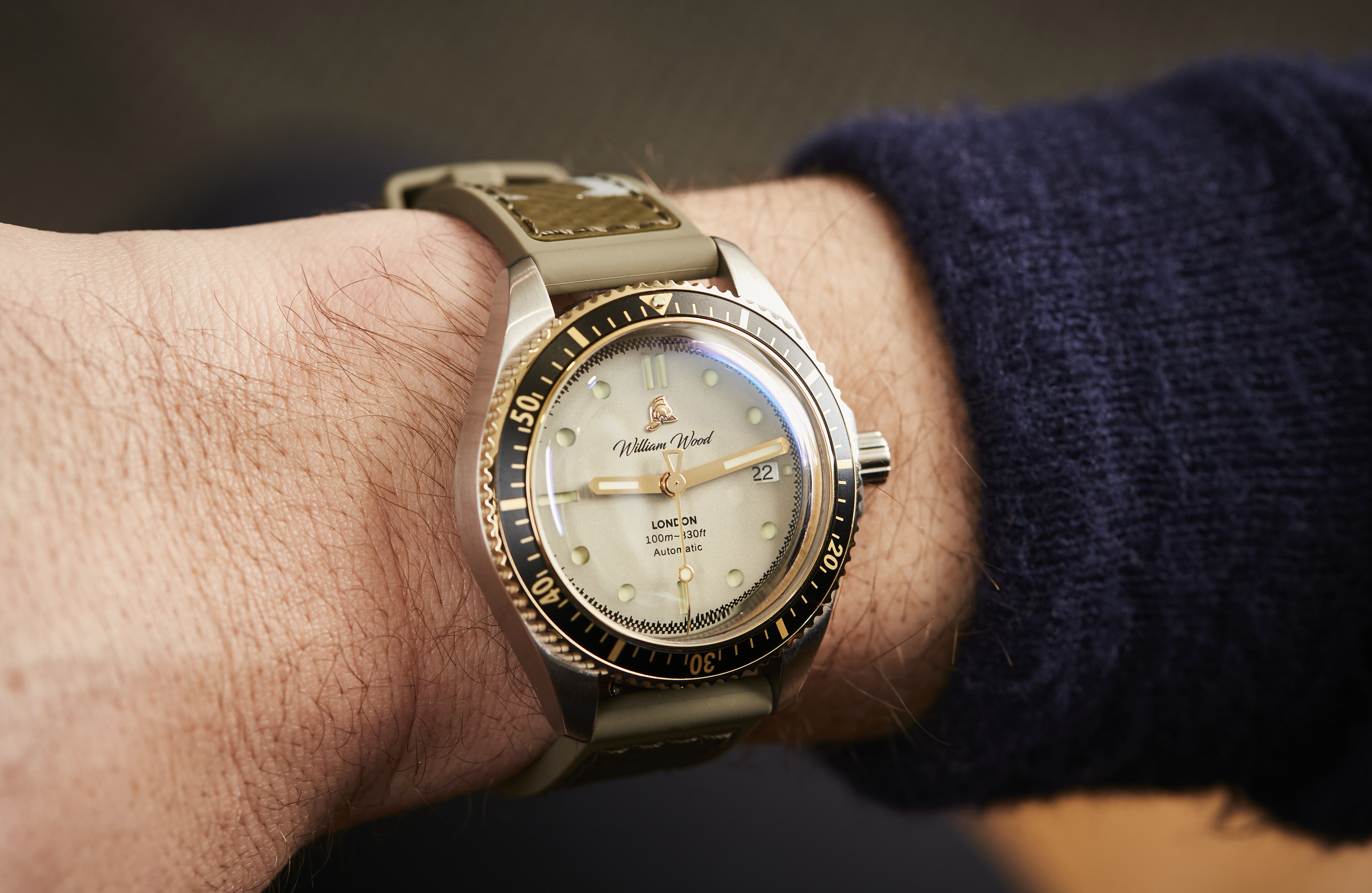 The Valiant White can be had with a number of different straps or a tri-linked stainless steel bracelet. Ours was fitted with the upcycled khaki green military fire hose strap, and it flattered the rest of the watch no end. The soft rubber backing of the strap was exceptionally comfortable, and it was also very cool to see that the strap really had been repurposed from the military, featuring white painted letters that are smudged and worn into the green surface. William Wood has also started making these straps with quick-release spring bars, making strap/bracelet changes a breeze.

So while the Valiant White may shirk some of its utilitarian qualities found in other iterations in favour of visual opulence, the overall package is an undeniably desirable one. And just like the rest of the range, it’s limited to just 250 examples, with an RRP starting at $1125 AUD. T+T is proud to be able to offer this watch at the T+T shop right now, and if you like the look of this beauty, why not check out the listing by clicking right here.