Some watches take the world by storm the moment they are released. Some, however, take a little while longer to be appreciated. The true significance of the Universal Genève Polerouter, first released in 1954, and its subsequent offshoots are still in the process of being properly recognised. Not only was it the first really significant design to exit the pen of Gérald Genta (who would go on to design the Audemars Piguet Royal Oak and the Patek Philippe Nautilus before overhauling Bulgari’s product offering and launching his own brand), it was a trailblazer upon its release. And still, to this day, the Polerouter is often cited as the inspiration for many modern watch designs. With so much going for it, it’s not hard to see why. 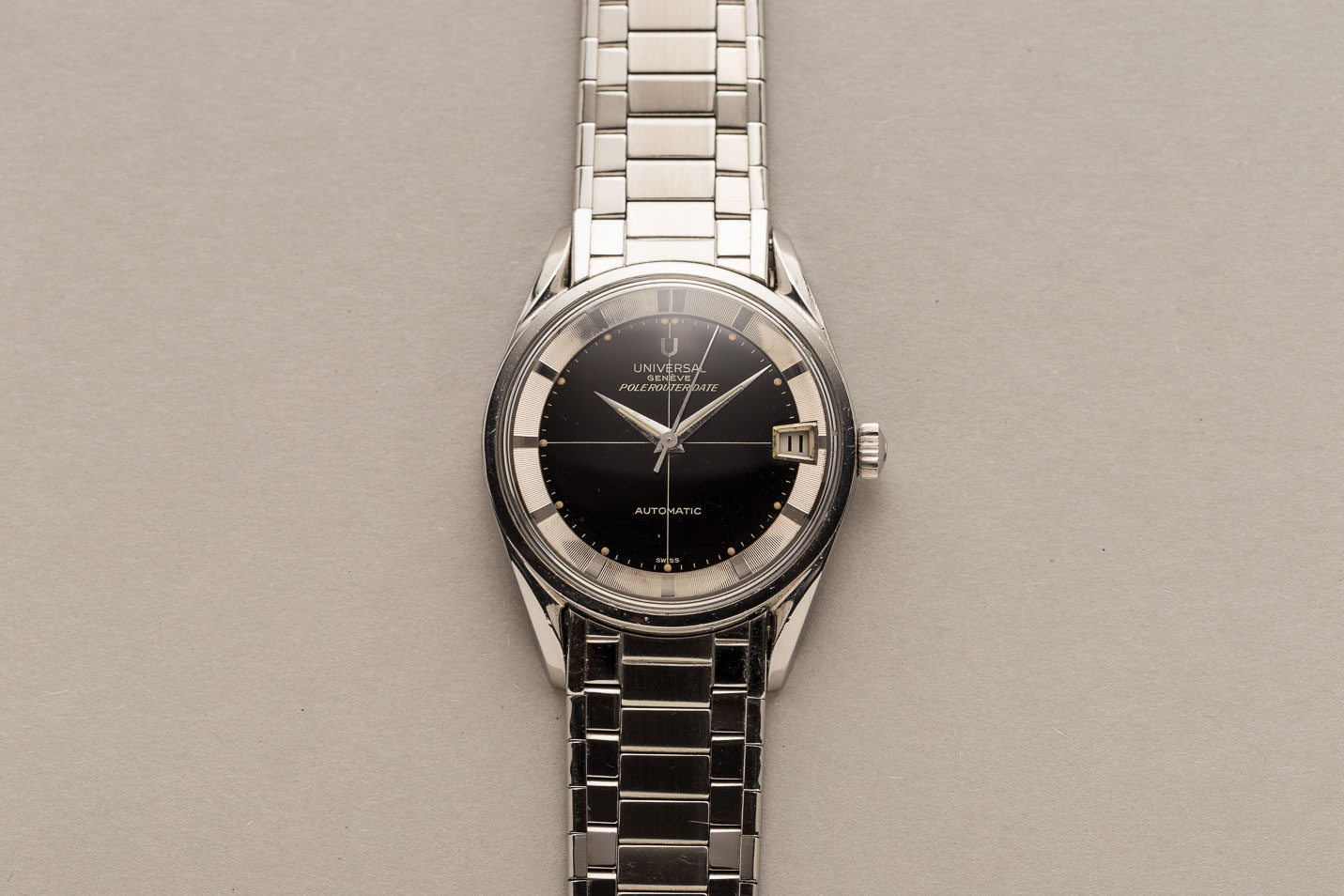 The first thing that is likely to strike you about the Polerouter are those graceful bombé lugs that look like the slinkier, sexier cousin of the lugs you’d expect to find on an Omega Speedmaster (a watch that would not hit the shelves until the Universal Genève had been on the market for the best part of three years). What is less immediately apparent about those lugs, however, is the space between them. Although the UG Polerouter measures just 35mm in diameter (excluding the crown), the lugs are actually spaced 19mm apart, meaning the visual impact of this watch on the wrist was much increased. 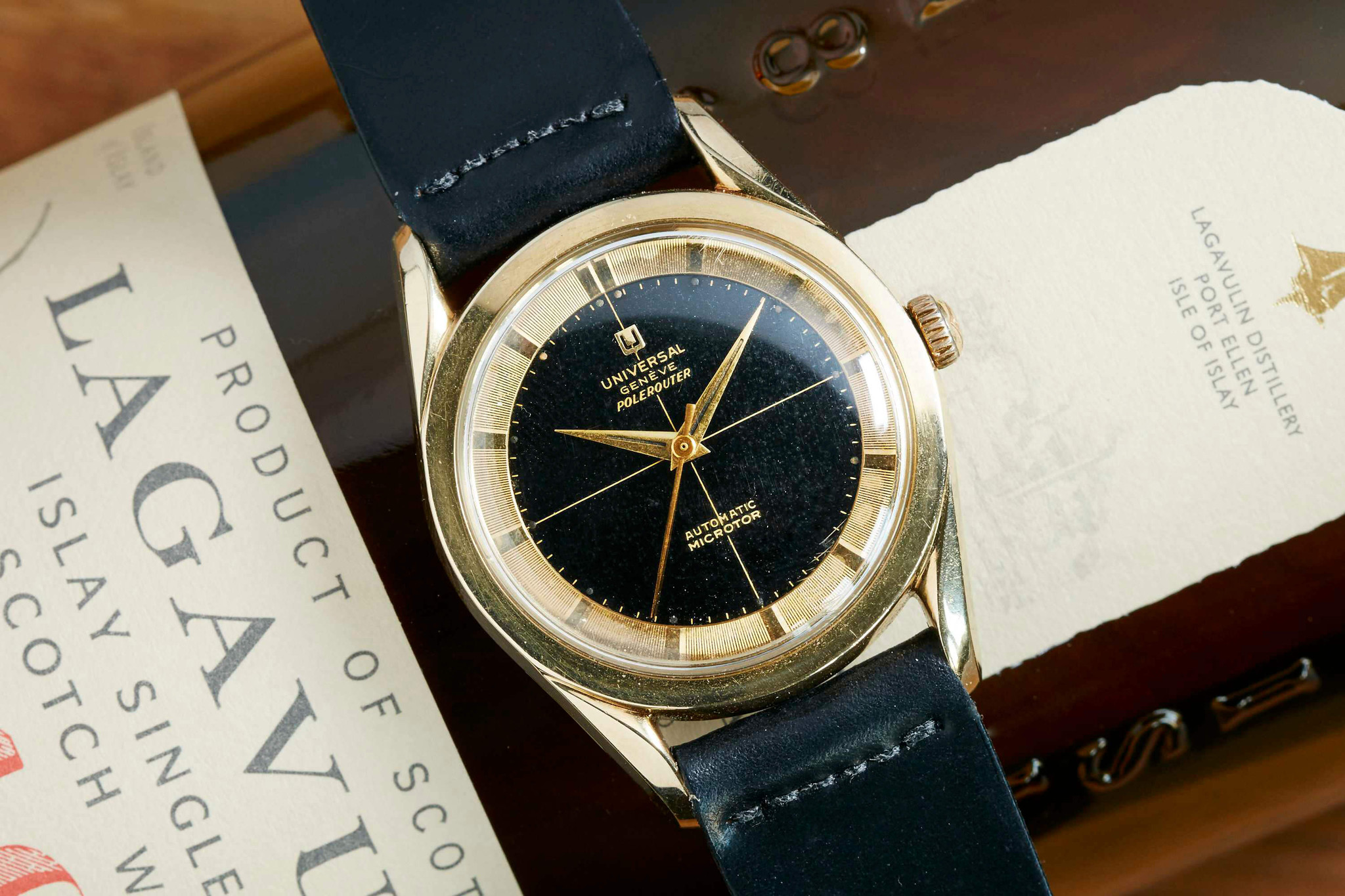 It made quite a stylistic statement considering it was actually designed as a tool watch (no, really). Its name is a dead giveaway of its intended application: To accompany commercial pilots as they flew the Polar Route for the first time. What, you might wonder, made this classy-looking dress watch more suited to that task than its competitors? Despite its graceful exterior, Universal Genève actually designed the Polerouter to be highly resistant to the strong magnetic fields one might expect to find at the Earth’s poles (both north and south). 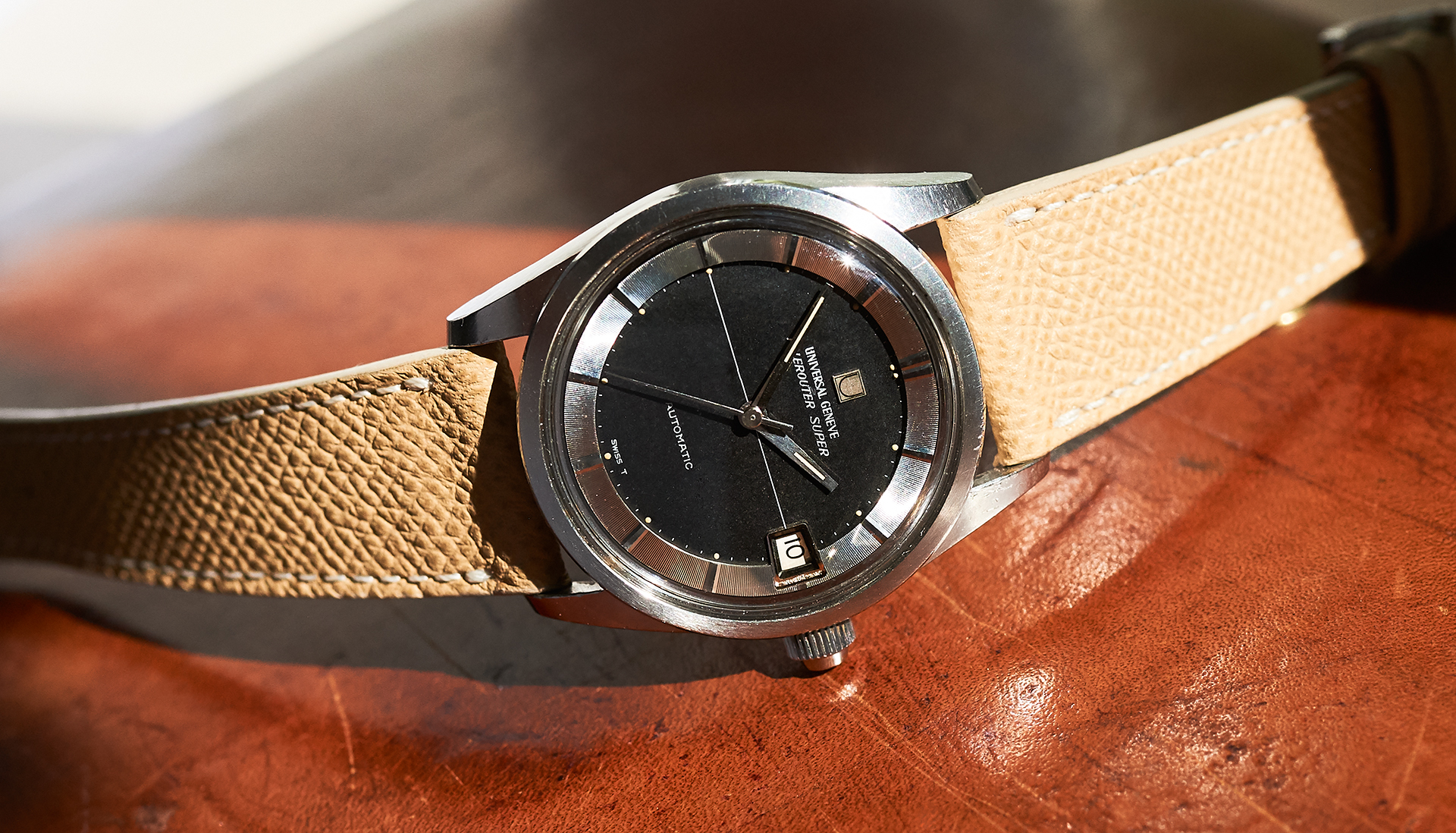 From 1955 onwards, the Polerouter was available with a micro-rotor movement that is of remarkable quality. Beautifully laid out and expertly finished, the Microtor Calibre 215 was hidden behind a closed caseback, but clearly marked the model as one of the finest examples of Swiss watchmaking, inside and out, that the watch world had ever seen. 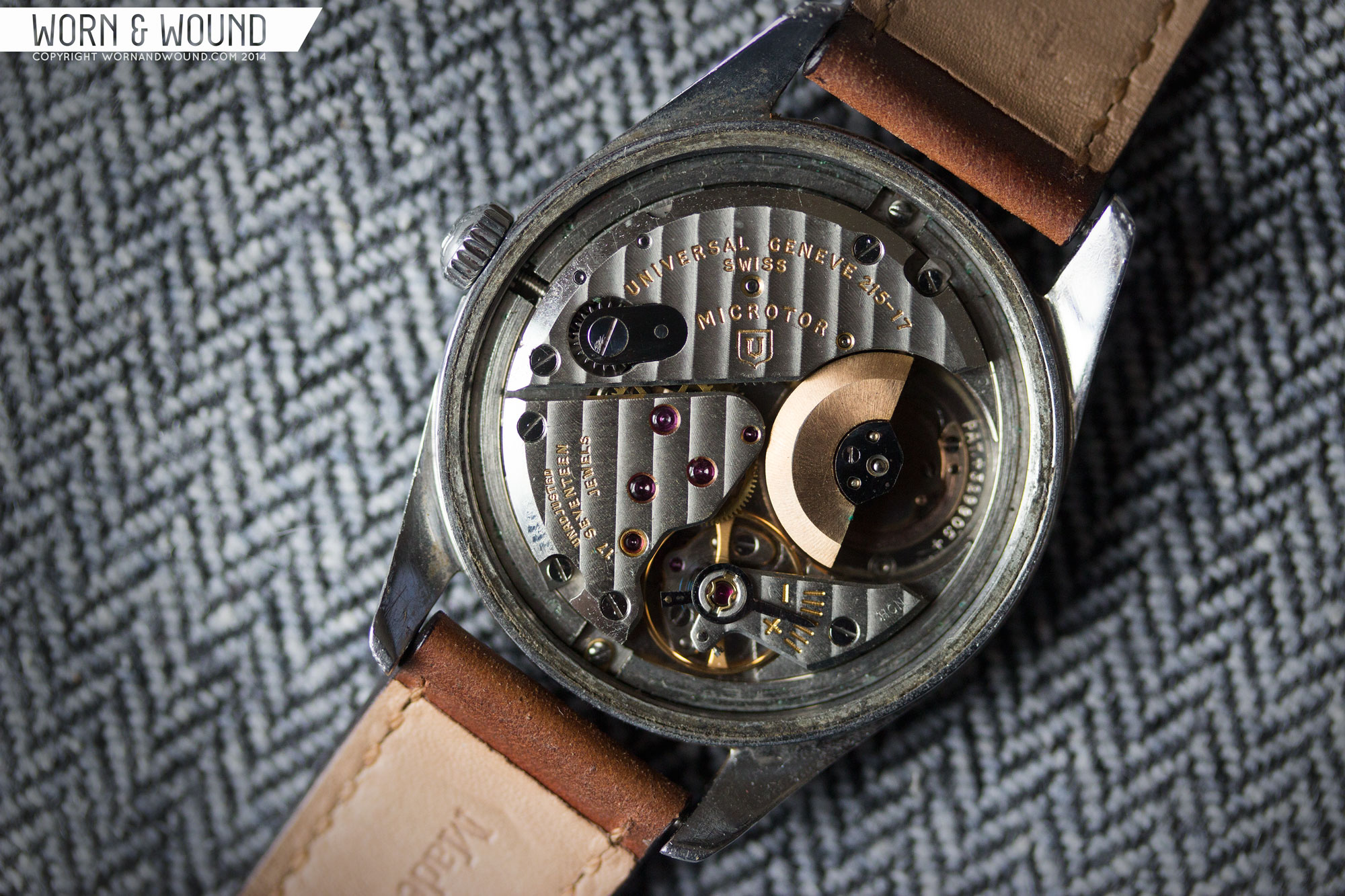 And that dial – oh, that dial! In a decade that saw the release of pretty much every classic you might care to mention (say hello to the Omega Seamaster, Speedmaster, and Railmaster models. Doff your cap to the Rolex Submariner, Day-Date, GMT-Master, Explorer and the Milgauss. Yell aloha at the Hamilton Ventura. Clear the Breitling Navitimer for take off. You get the picture …), the Universal Genève Polerouter stands up under scrutiny. The multiple levels, the contrasting finishes that offered both clarity and visual stimulation, the luminous pips at the hour points … 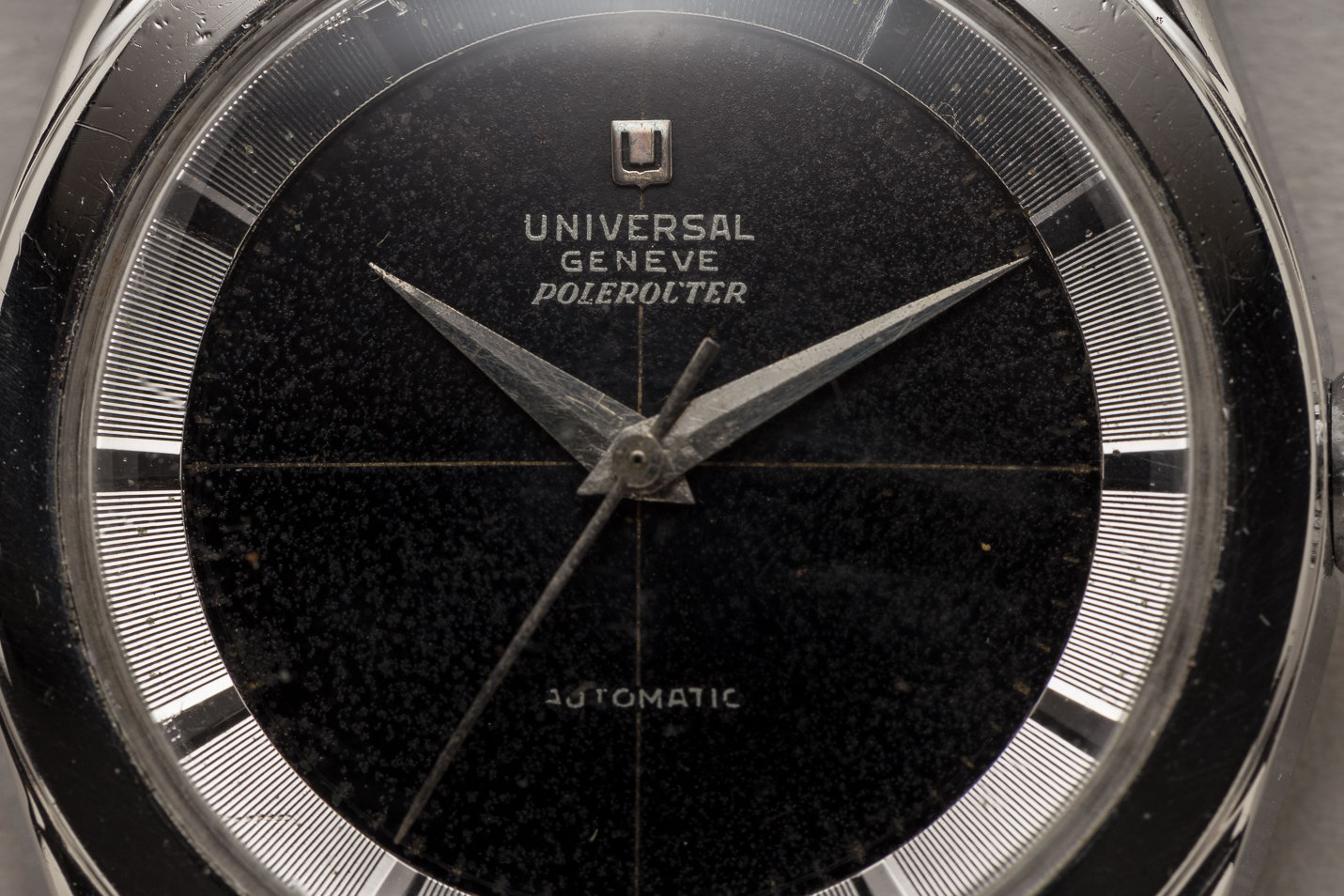 For a watch that, at first, looks remarkably simple, there was a lot to get excited about. And there still is. More than 65 years since its release, it is still inspiring wristwatch lovers and designers the world over. Move over, Royal Oak. Get lost, Nautilus. The true king has returned and he wants his throne back.