Editor’s note: If it can be the daily wear of James Bond, it can be yours, too. But how does the Omega Seamaster Professional 300M actually wear on the wrist? If you haven’t had the pleasure of experiencing one in the metal, it’s a must, because while the brief of making a daily watch might seem simple, it is much harder to execute than you’d expect, and the watch colloquially known as the SMP gets it just right. Let’s take a closer look at why it is so successful.

We all love a birthday. And watch brands love them as much as anyone – an excuse to celebrate, a hook for a new collection. At Baselworld 2018, Omega marked the 25th anniversary of the Seamaster Professional Diver 300M (aka the James Bond watch) with a revamp. It was the SMP that kicked off Omega’s relationship with the Bond franchise, becoming something of a late-1990s icon as Pierce Brosnan wore a series of tricked-out, weaponised versions of the watch over the course of four movies. 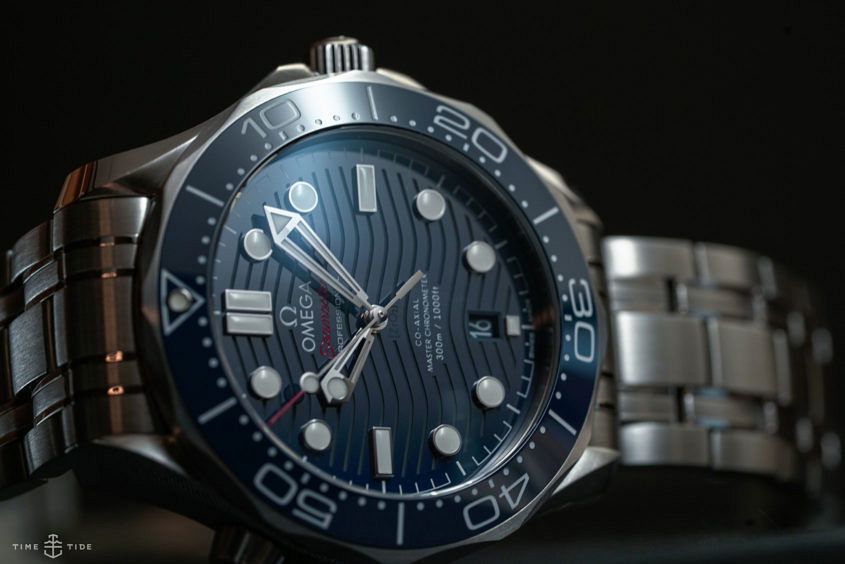 With 14 new variations – six in stainless steel and eight in steel-gold combos, three dial colours and a choice of rubber strap or steel bracelet – Omega’s revamp of the Seamaster Professional Diver 300M is about updated materials and mechanics rather than a major redesign. The case diameter has increased from 41mm to 42mm and the Seamaster’s distinctive cone-shaped crown for the helium escape valve sits at the 10 o’clock position. For the first time on a Seamaster Diver 300M, the case-back is sapphire crystal.

The movement is Omega’s well-proven co-axial chronometer calibre 8800 (introduced in 2016), which is METAS-certified for magnetic resistance to more than 15,000 gauss and has a 55-hour power reserve.

The rotating dive bezel is now made of ceramic and, on this blue version, has inlaid white enamel markers. On the dial – also ceramic – Omega have reintroduced the distinctive wave pattern of the early SMPs and moved the date window from the 3 o’clock position to 6 o’clock. The shape of the skeletonised hands is also strongly reminiscent of those on the original. 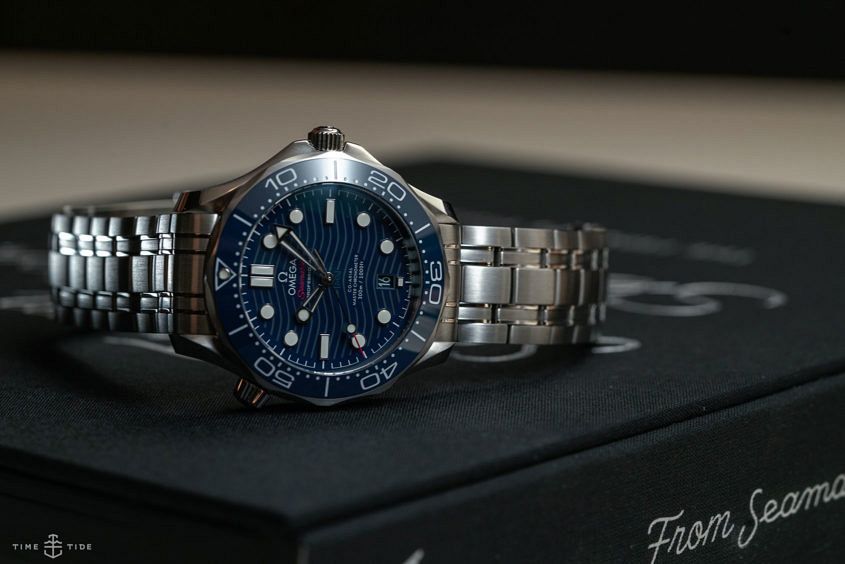 The two steel-on-steel models capture the look and feel of the original far more than the rest of the new line-up does; in black it’s classic and restrained (maybe too restrained?) while in blue it’s right on the nail. Nostalgia aside, the simplicity of the blue bezel/blue dial combo makes for a really clean and strong design – which is what we want in a sports watch.

The glossy finish of the ceramic dial and the slightly wider laser-cut wave pattern look more assertive than on the earlier SMP models and the effect is well balanced by strong but not overbearing indexes that are filled with bright white Super-LumiNova.

The increase in case size from 41mm to 42mm is barely discernible on the wrist and, with those nicely curving lugs and great weight distribution, it feels very present yet really comfortable on the wrist – even a small wrist. The soft and fluid feel of the bracelet is an unexpected treat on a proper sports watch.

Anyone wanting a robust and really good-looking everyday wearer that could take them from office (although not a suit-and-tie profession) to beach and some proper diving. Oh, and James Bond fan-boys (and maybe some girls).

The blue-on-steel model looks totally right and very modern, despite being closest in look and feel to the original; the more ‘adventurous’ colour and metal variations don’t quite gel with me (although will certainly not be short of fans).