It’s a surprisingly vexed question. You get voted into office as a Prime Minister or President, and suddenly the public’s attention turns to your wrist. Do you continue to wear the watches you’ve worked so hard to acquire? Or do you suddenly downgrade your wrist to what you were wearing when you were in short pants …

Among the current international statesmen, Vladimir Putin is very much in the “If you’ve got it flaunt it” category. His astonishing watch collection stands alone. Where others prevaricate over Patek or Pulsar, Putin puts on the Ritz. Picks of the bunch would have to include his platinum A. Lange & Söhne Tourbograph that’s valued at over 525’000 CHF (more than $AUD890,000). 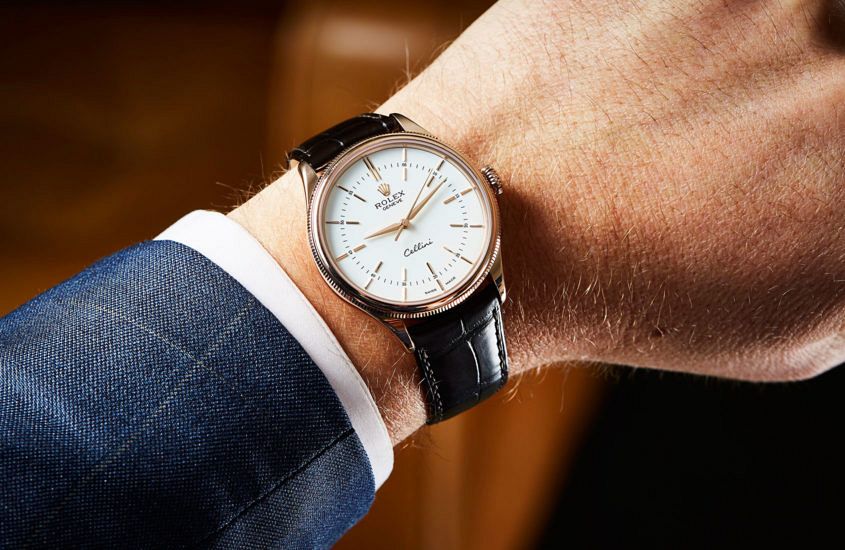 Barack Obama’s watch choices have changed since he rejoined civilian life. He often wears a white gold variant of this elegant Rolex Cellini.

The Russian president’s watch drawer is also known to includes a Patek Philippe Perpetual Calendar, Patek Philippe Calatrava, Breguet Marine, Blancpain Leman Flyback, and a Blancpain Leman Aqua Lung Grande Date (his fourth after he gave two Aqua Lungs away – one to a locksmith, another to a shepherd’s son – and then threw a third into liquid concrete at a building site).

But would Putin’s Platinum-level wristgame be tolerated for long in a modern democracy? Judging by the wrists of other Presidents, Sarkozy included in the last instalment, the answer is no, not long at all. Political leaders in the US, UK and Australia are more careful and must contrive a pantomime between the public and personal that plays out on their wrists. 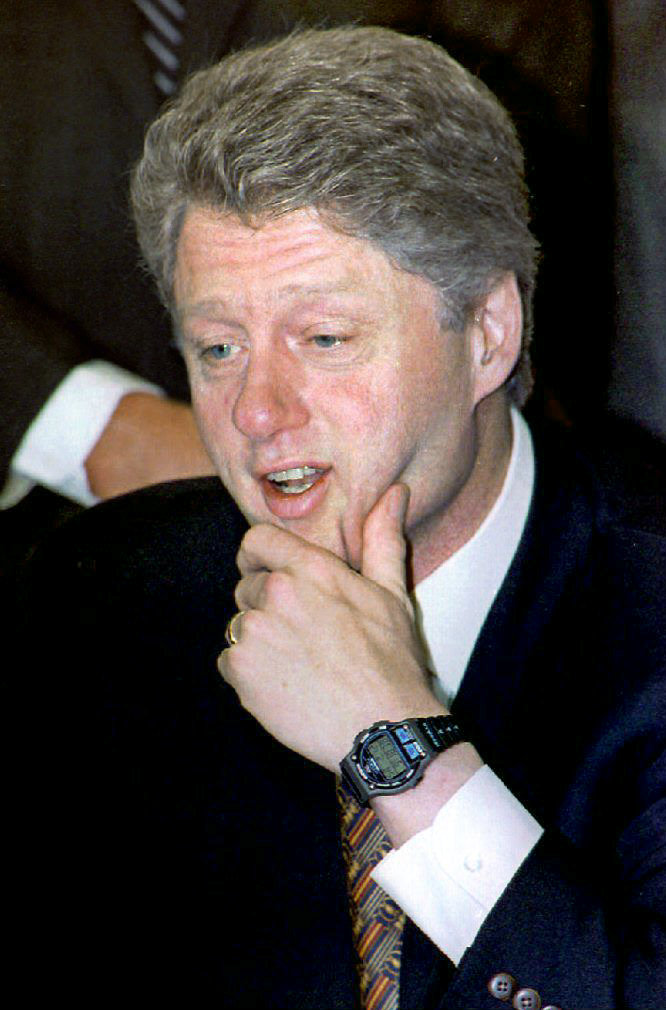 Bill Clinton in man-of-the-people mode with his Timex Ironman Triathalon.

[Clinton’s] response was to wear a Timex Ironman Triathlon, a watch described by Washington Post as “a plastic digital watch, thick as a brick and handsome as a hernia”.

Bill Clinton is in some ways unfortunate. Rolex used to give every US president from Lyndon B. Johnson to Ronald Reagan a Day-Date but, by the time, Clinton came to power, such overt gift-giving was frowned upon. His response was to wear a Timex Ironman Triathlon, a watch described by Washington Post as “a plastic digital watch, thick as a brick and handsome as a hernia”.

This conspicuous humility may have helped his image as a down-to-earth guy who liked his pizza and (memorably) cigars. But it was also a total charade. Once out of office, Clinton raised his watch game in a major way. Luxury watches he’s been spotted wearing since leaving the White House include a Panerai Luminor GMT,  a Panerai Radiomir Black Seal, a Jaeger LeCoultre Master Compressor Alarm Navy Seals, an Audemars Piguet Jules Audemars Chronograph and a A. Lange & Söhne Grosse Langematik Gangreserve. Quite the horological makeover, you’ll admit. 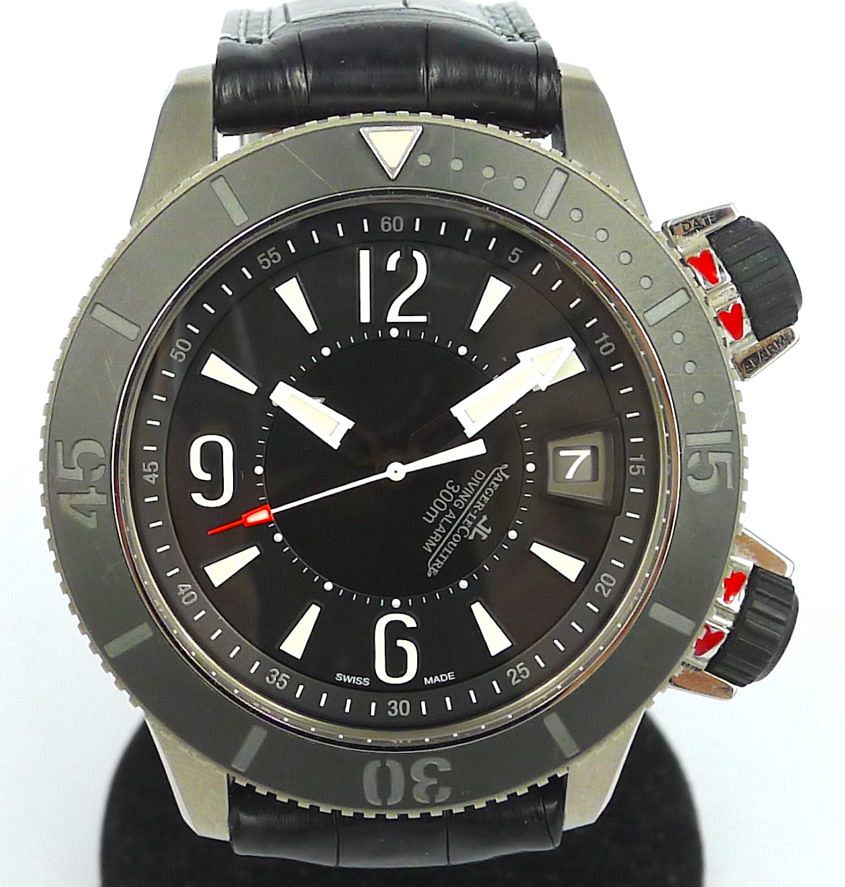 Barack Obama’s evolution was less radical but followed the same trajectory. When he entered the White House, Obama wore a Jorg Gray 6500 chronograph that he’d been given by his Secret Service agents for his 46th birthday. In 2010, The Financial Times took this $US250 watch as proof of his honest-to-goodness humility. “For conclusive evidence that he really is ‘no drama Obama’, look no further than the US president’s watch,” wrote The FT‘s Anna Fifield. “He may have gone to Harvard Law School but there is no flashy Rolex on this former community organiser’s wrist.” 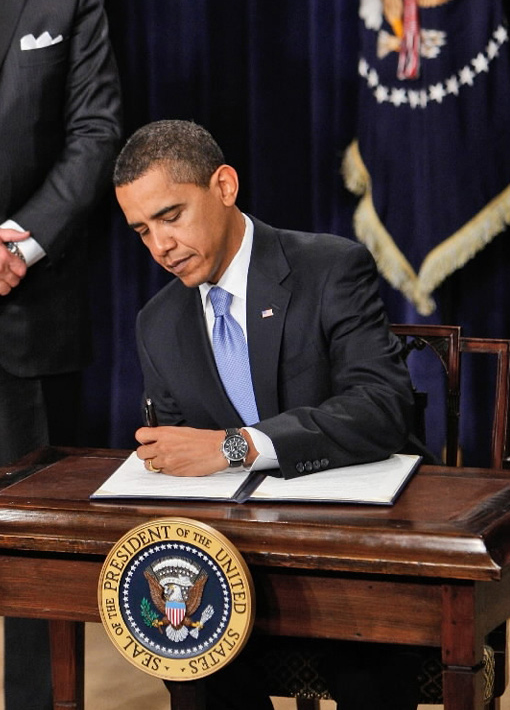 Obama signs into office with his Jorg Gray.

Back in civilian life, however, Obama quickly treated himself to the aforementioned “flashy Rolex”. Less than a year out of office, he was spotted wearing a white-gold Rolex Cellini. To be fair, as a classical dress watch with an extremely slim case profile, it’s really not that flashy. At $21,500, the Cellini certainly isn’t cheap, but perhaps the restrained elegance of the piece reflected Obama’s desire to still keep his watch relatively unobtrusive.

Closer to home, Australia’s former Prime Minister Malcolm Turnbull is another interesting case. As a former managing director and partner of Goldman Sachs, Turnbull isn’t short of money. He’s got an estimated net worth of $180 million and, before becoming PM, lived in a multimillion-dollar waterfront mansion in Sydney’s Point Piper that’s estimated to be worth $50 million. 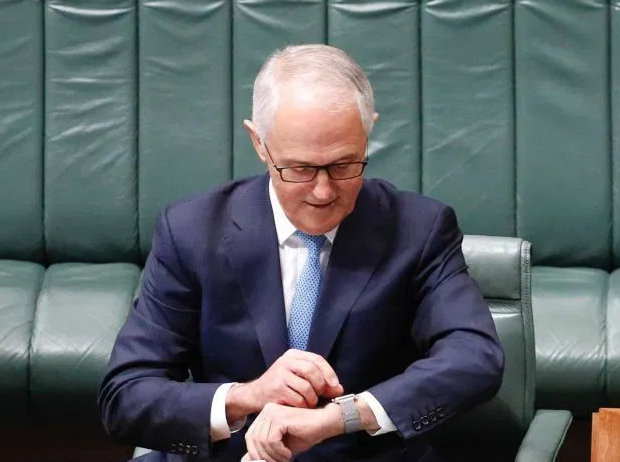 One of many shots of Malcolm Turnbull wearing an Apple Watch.

Turnbull was probably Australia’s best-dressed leader, or at least on a par with Zegna-clad Paul Keating, and had a penchant for handmade Canali suits and Hermès ties. He had an eye for a fine watch, too – in 2016, he bought his wife, Lucy, a $25,000 Cartier watch for her birthday. So what timepiece did Turnbull opt to wear? 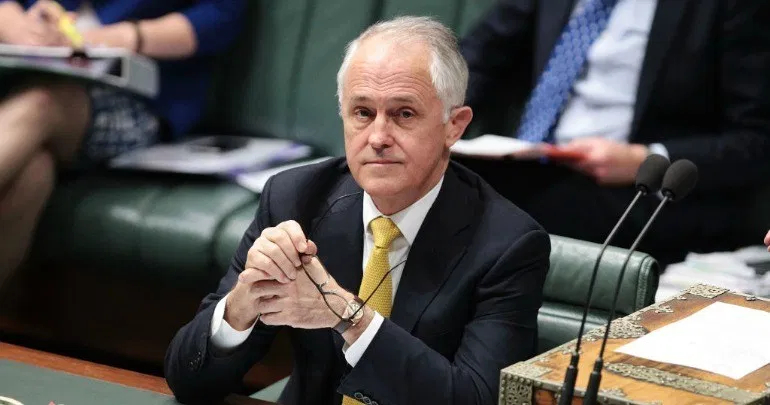 An Apple Watch. In many respects, it’s not a bad choice, suggesting that he’s both forward-looking, tech-savvy and, crucially for the electorate, not too flashy. Intriguingly, however, shots have emerged that reveal Turnbull does have other options. Identifying watches from fuzzy pictures is, of course, a mug’s game (we hold our hands up here). The diminutive size suggests it’s a vintage piece. If we had to hazard a guess we suspect it’s a Rolex Bubble Back similar to the one worn by Ryan Gosling in Crazy, Stupid, Love. 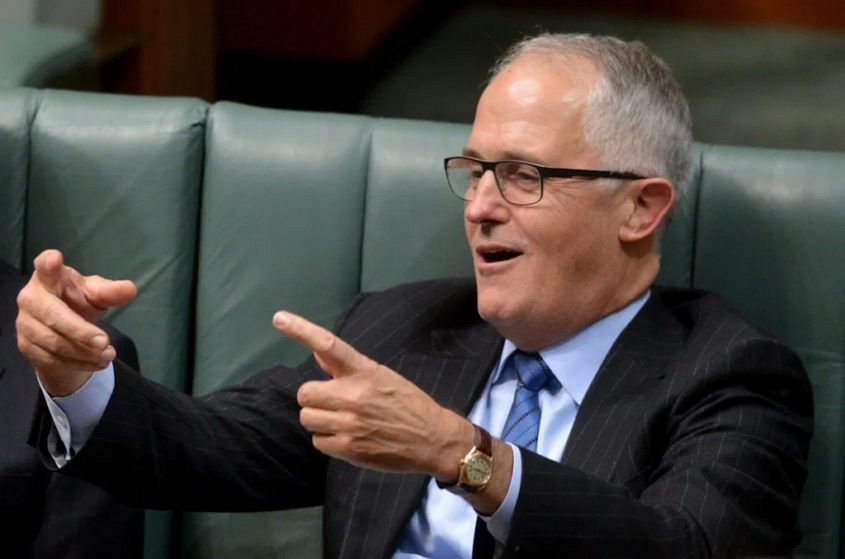 Turnbull’s successor, the current PM Scott Morrison, is a stolid pragmatist whose initial success stemmed from his grasp of Australia’s suburban conservative values. ScoMo, it’s fair to say, is not a wildly progressive man. An evangelical Christian, he rose to prominence for enforcing the controversial “Stop the Boats” policy as immigration minister in Tony Abbott’s government and was one of a handful of MPs who abstained from voting on same-sex marriage. 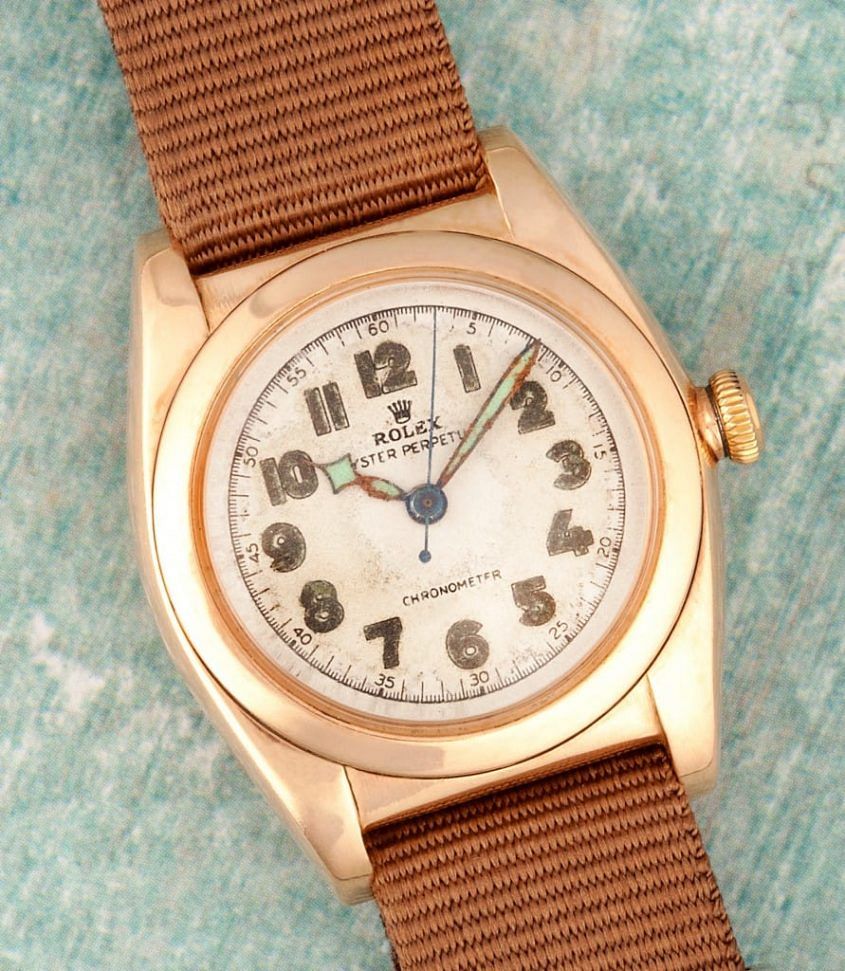 Yet he definitely understands the semiotic power of what he wears. On the Aussie flag lapel pin that’s constantly attached to his suit, Morrison said: “I’ve been wearing this now for many, many years. I can’t remember when I first started doing this. The reason I wear it is because it reminds me every single day whose side I’m on. I’m on the side of the Australian people. That’s what I’m saying to myself. That’s who I think about first. Every single day.”

This is man-of-the-people schtick of the most eye-rolling nature and it’s worth remembering that ScoMo’s election-winning persona was deliberately contrived – as this hilarious video suggests.

Scott Morrison’s watch choice – from what we can again make out from dodgy pics – is subject to speculation. But judging by the heavy-set dark logo at 12pm and black bezel, our money is on a TAG Heuer Formula 1. If so, it’s quite a flamboyant watch for ScoMo. But again, it would reflect his cynical grasp of his electorate. TAG Heuer have always been one of the most popular watch brands in Oz with the Formula 1 a particularly accessible piece. Does this watch reflect another calculated choice from Morrison to appeal to his national heartland? 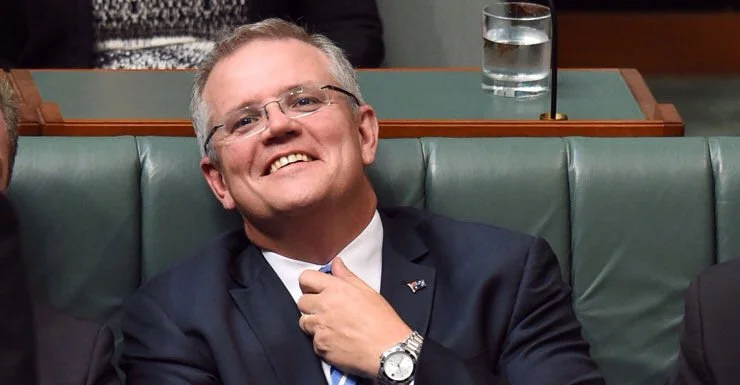 Finally, to the UK and Boris Johnson – how would the British Prime Minister approach his wristwear? Behind his entertaining bluster, former colleagues have spoken in detail how he is utterly unfit to be Prime Minister. As his former boss, Max Hastings writes, “There is room for debate about whether he is a scoundrel or mere rogue, but not much about his moral bankruptcy, rooted in a contempt for truth.”

If you accept that subjective line of reasoning and consider Johnson’s absurdly privileged upbringing – an international childhood, Eton, Oxford – there was a strong chance that Johnson would pursue the Putin/Berlusconi line of thought (i.e. “who gives a stuff what the hoi polloi think, I’m going to wear a satanically magnificent watch”).

And yet … at the same time, behind his shambolic image – the rumpled jackets and inside-out socks – is a cunning opportunist. Given Johnson’s understanding of the media landscape, would he do the sensible thing and play things down?

Consequently, the identity of Johnson’s timpiece has provoked wild conjecture. Was it a Patek Philippe Calatrava? The brand did, after all, used to advertise in The Spectator when he was editor. Or was it a Piaget Tradition?

Johnson, it turned out, wears a Pulsar dress watch, an accessibly priced watch that would set him back less than $300. Obviously, it’ll be interesting to see if such modesty continues when he eventually leaves power, but he does seem to have taken the sensible path for the moment. 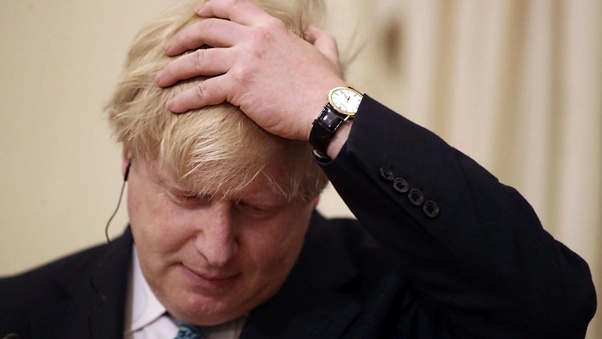 Ultimately, it seems, if you’re a politician then your watch is a no-win situation. Wear a good one and you’ll be damned as an overpriveleged twerp who’s out of touch with the real world. Wear a modest one and you’ll be damned as a cynical hypocrite whose opportunism even extends to your wrist. In such fraught circumstances, it’s no surprise that one of Johnson’s predecessors, David Cameron, refused to wear a watch entirely, offering the simple explanation: “Gentlemen don’t wear jewellery”.