The Tambour is Louis Vuitton’s most well-known watch design.  The fashion mega-brand has been slowly but surely establishing itself as a top-tier watchmaker since establishing Le Fabrique Du Temps, their dedicated watch manufacture, in 2014. Since then, several of Louis Vuitton’s watches have earned the Geneva Seal, a rarified standard of Swiss watchmaking reserved for the best of the best (think Cartier and Vacheron Constantin among others). Meanwhile the brand has demonstrated it’s horological chops with head-turning pieces like the Tambour Spin Time, the Spin Time Air Quantum, and the artisanal-focused Tambour Carpe Diem. But the Tambour with its distinctive drum-shaped case has arguably become the brand’s most established watch and, to celebrate the 20th anniversary of the range, the Louis Vuitton Tambour Twenty pays tribute to the original reference with some refined updates.

The original 2002 release of the Tambour included one time-only watch and one chronograph, and the new Louis Vuitton Tambour Twenty chooses the latter as its basis of replication. The name “Tambour” is French for “drum”, given that the sides of the round case are sloped like a cross-section of an African djembe. In order to keep the integrity of the drum shape, the lugs are in a detached style that look like they’re floating alongside the case, rather than fused to it. This style of lug does tend to stretch a little further than regular lugs, however their curve and cutout for the leather strap helps it hug the wrist nicely.

The diameter of the case is 41.5mm at its widest point, however thanks to the sloping case it actually appears a bit smaller at the dial opening. There is a thin chamfered area which serves as the bezel, then merging with a flat piece of sapphire crystal. The entire case is finished in a high polish, serving an intentionally flashy dose of luxury, and happily boasting the French design house’s name with “LOUIS VUITTON” engraved into the sides of the case. At 13.2mm tall, it’s also not going to be incredibly cuff-friendly, but this isn’t a watch that wants to be hidden away. The chronograph pushers are quite neatly integrated with a pill-like appearance, and the crown retains elegance alongside grip with an octagonal shape. 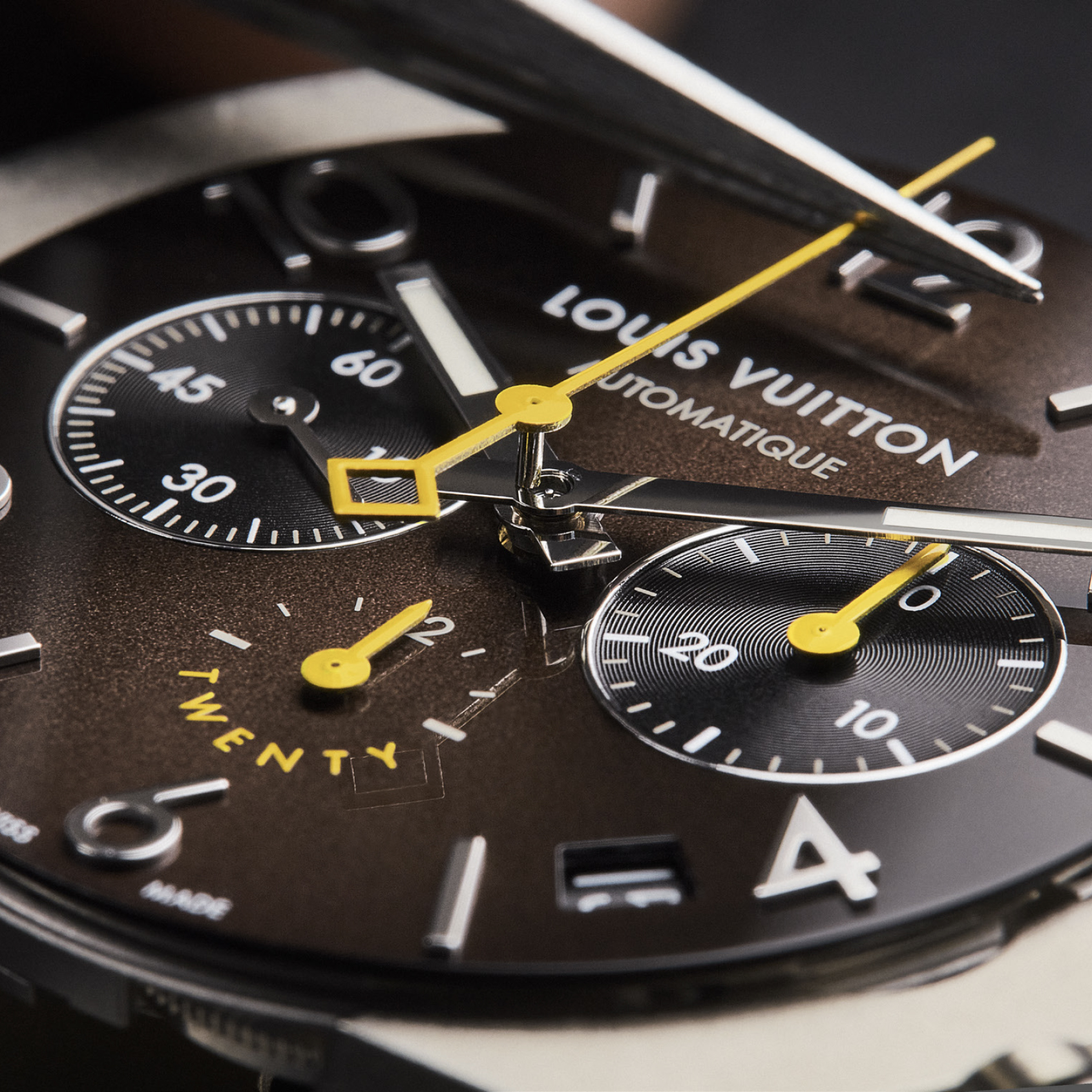 The dial of the Louis Vuitton Tambour Twenty is only subtly changed from the 2002 original, but all of those changes are definite improvements. The dial is firstly cleaned up with a more defined bi-compax subdial layout of the chronograph registers at 3 and 9, while the 12-hour counter has been simplified to printed markings and a petite yellow hand. Next, the date window is much more nicely integrated at 4:30, with the excess space clipped and a black background instead of the previous white. The chapter ring around the dial’s circumference is a bit easier on the eyes too, with detailed minute and 1/5th second markers printed in fine white lines.

The rather sumptuous colour scheme of the Louis Vuitton Tambour Twenty isn’t just an arbitrary choice, even though brown-dialled watches have been increasing in popularity in recent years. Instead, the dark brown tone is a reference to Louis Vuitton’s leather goods and especially their trunks, which brought the brand into fame. The pops of yellow on the chronograph seconds hand, minutes register, hour counter and ‘TWENTY’ script is a reference to the contrasting stitching that Louis Vuitton would sometimes use.

The Louis Vuitton Tambour Twenty is strictly limited to only 200 pieces worldwide, and will be available from Louis Vuitton stores. Price: TBC