Living the dream is a phrase overused to a point of meaninglessness. But make no mistake about it, Chris Hemsworth is living the dream. We meet on a yacht in Port Hercules, Monaco, hosted by TAG Heuer. It is to be our home for the next few nights as the Monaco Formula 1 takes place on the streets of Monaco which pass right by the boat.

When qualifying begins, the scene on deck is an odd mix of Dunkirk – with high-octane engines whining around the boat like a swarm of Spitfires – and Ocean’s 11, taking into account the intimidating savoir faire of other guests on the boat, a mix of global influencers and luxury lifestyle media. The Ocean’s 11 atmosphere is heightened by the presence of Matt Damon. Matt and his wife Luciana are guests of Chris, whose wife Elsa is joining him for this little sojourn. 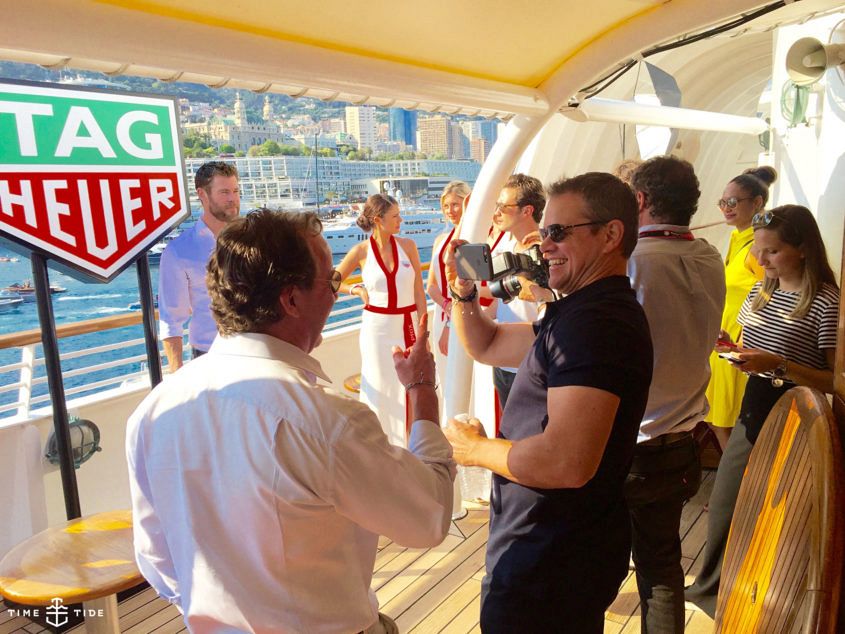 There’s a slightly rogue atmosphere around the group who are kid-free and off the leash. “I can’t remember the last time this happened,” Damon says at one point with a big smile on his face. We’re farming through canapes in the TAG Heuer Lodge, a corporate box of sorts with magnificent views over the track and the steep hills of Monaco. “Chris just called and said, ‘Do you want to come to Monaco with Luciana?’ And he said Elsa was joining him. The timing was right, so I said absolutely.” 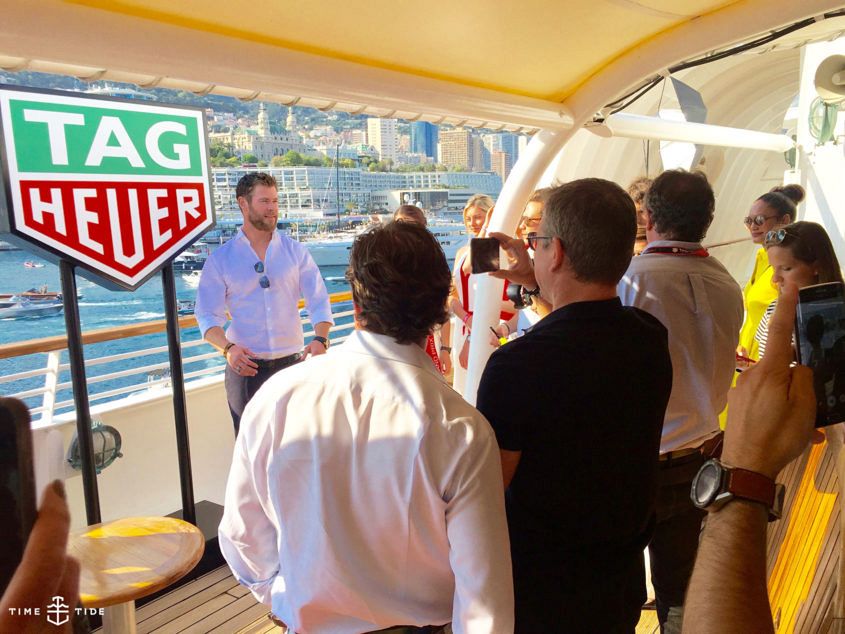 The entourage also includes Chris’ personal trainer, a buff rooster of a young lad with sleeve tatts and a taste for spirits. On the shuttle boat between the TAG Heuer yacht and the lodge, after patting himself down for several minutes, he announces that he has lost his phone from the night before. Damon and Hemsworth help him retrace his steps. It really is all happening.

It’s no wonder Hemsworth, 34, travels with his trainer – his physique is practically his personal brand these days. Because, well, Thor. The role he now owns as the ultimate Marvel muscle-man has been a game, life and location changer for Hemsworth. “Having the Marvel films speckled throughout my career keeps putting you back in the game, you can make riskier choices, but it still gives you the freedom to say no from time to time.” 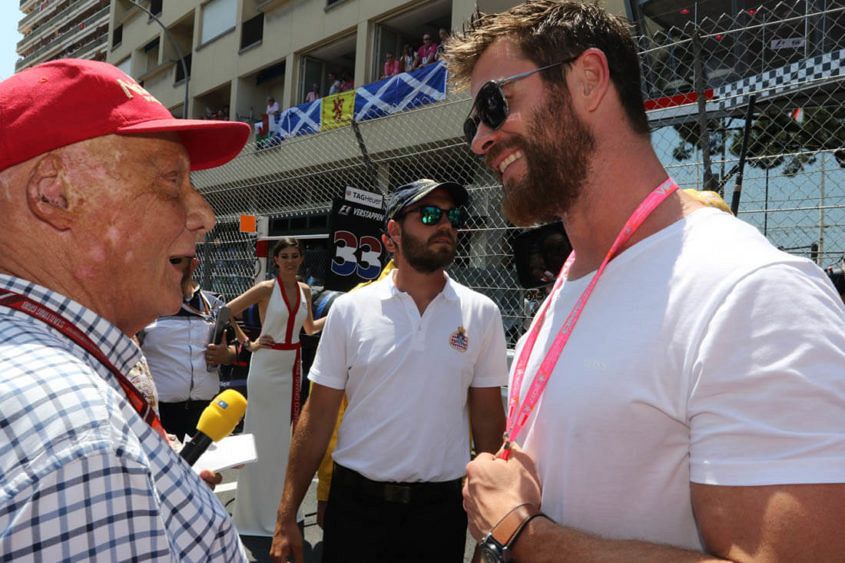 But with great roles comes great responsibility and you get the sense, from the outside, that ‘being a superhero’ over an extended period pervades every minute of every day; the only time over the jaunt that he is spotted eating, it’s a plate piled high with beef carpaccio on race day. Very Thor, actually.

The regularity of the Thor-related Marvel movies has delivered some serious upside in terms of lifestyle. It has meant that Hemsworth can move his family home to Australia, where they have settled on a 4.2ha property just outside of Byron Bay, on the north coast of New South Wales. The eight-bedroom, 11-bathroom property, purchased for $7 million three years ago, is undergoing a renovation costing more than the original purchase price – which means Hemsworth is in Australia to stay for the foreseeable future. 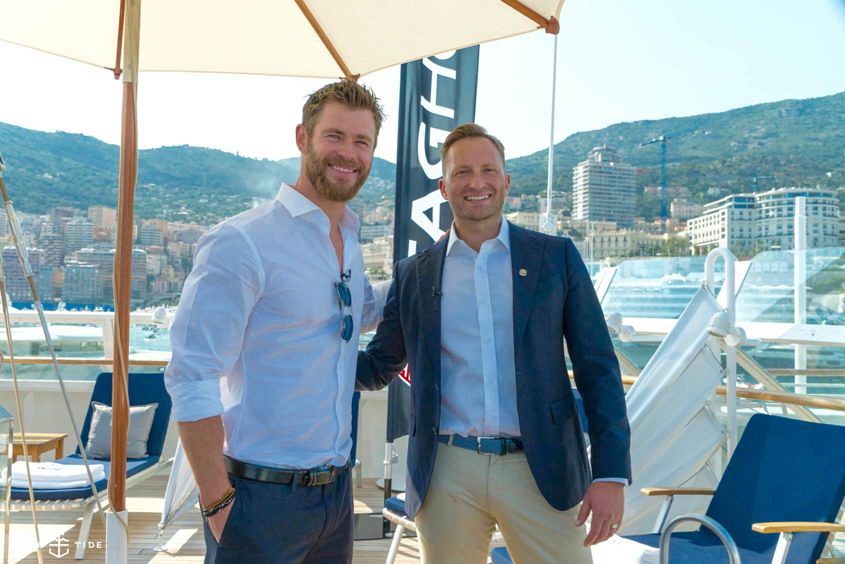 The negotiation about leaving L.A with Spanish wife Elsa Pataky, 41 — who is also an actor best known for her character Elena Neves in the Fast and Furious franchise — was brief and conflict-free. “There was a period when I had to be there, just purely to be knocking on doors and going to auditions and meetings,” he says. “But when I’d got my foot in the door and I didn’t need to be there every day we very quickly made the decision to come back home. And my wife being from Spain, loves Australia obviously; it wasn’t much of a conversation. Maybe that will change down the road, but presently we have the luxury to travel back and forth. That’s always been the dream for me — to work around the world, but still call Australia home and come back and have my kids grow up there, in particular on the beaches in Northern NSW where we are now.”

Hemsworth the dad is ever-present in conversation; you establish quickly that it is a core part of his identity. He has three children with Pataky, who he married after a whirlwind courtship in 2010; one daughter, India Rose, and twin sons Tristan and Sash. Despite his, and Damon’s current freedom – which the whole entourage are taking advantage of to the absolute fullest – many of his anecdotes include his children. They are clearly on his mind all the time. His journey as a dad is eminently relatable. 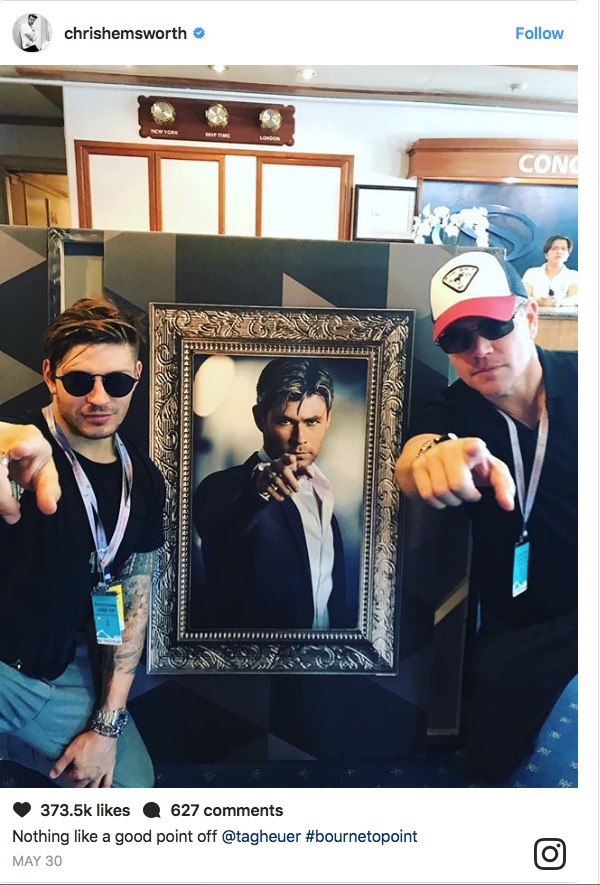 “It’s all about you before kids,” he says. “And then you have children and you still try to hang onto that. You say, ‘I am who I am.’ And then it goes out the window. A lot of my decisions now are based on how things are going to affect the family. What’s the location the film shoots in? If it’s some obscure, not so attractive place, do I want to drag the family there for four months? And then there’s the question of what the role’s going to do to me? Is it going to put my head in a space that’s pretty consuming? There are times [a role comes up] when I say, ‘Maybe not that one yet.’”

You have to applaud TAG Heuer for their choice of Hemsworth as an ambassador, and also their timing in choosing him, which was right before he crested the Hollywood wave as a bona fide A-List megastar. With all due respect, the better question is: why did he choose TAG Heuer?

“I just think they’re the best-looking watches out there,” he says, with none of the marketing mayonnaise applied. “Every watch has an incredible amount of detail and class. I grew up seeing TAG Heuer on people’s wrists, [and] I guess I always wanted one. It doesn’t matter if you’re wearing shorts and a t-shirt, or a suit on the red carpet, you can wear them with anything.” 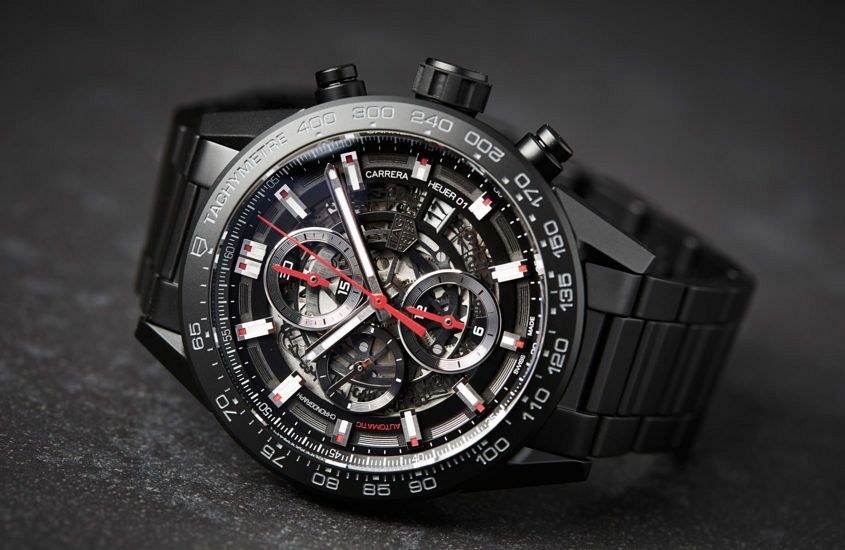 He’s not wrong. My first awareness of a ‘good watch’ was, to put a fine point on it, a TAG Heuer Formula 1 at secondary school. The connection between TAG Heuer and Australia is surprisingly deep. Sydney’s TAG Heuer boutique is, in fact, the highest-grossing in the world, per square metre.

As far as watch wearers go, there are several categories. Those that want watches for purpose: a dress watch, a weekend watch, a fitness watch. Hemsworth self-identifies strongly with the ‘one-watch’ category, who are seeking one good watch that can handle whatever is thrown at it — whether that’s a 200kg deadlift at the gym (surely these would just be warmups for Thor) or the Oscars. “Having options is always good, but for me the beauty of TAG Heuer watches is that they’re versatile.”

He proffers the Heuer-O2T in rose gold for inspection and claims it to be just such a watch. “I wear this one surfing, I wear it to the gym.” The horological geek inside me starts hyperventilating at the thought that a model with a tourbillon – the king of all watch complications, designed to counteract the effects of gravity by rotating the escapement and balance wheel in a cage – could ever be worn in the waves. But, it’s so delicate! But, it’s gold. For the love of Mary, it’s a tourbillon! 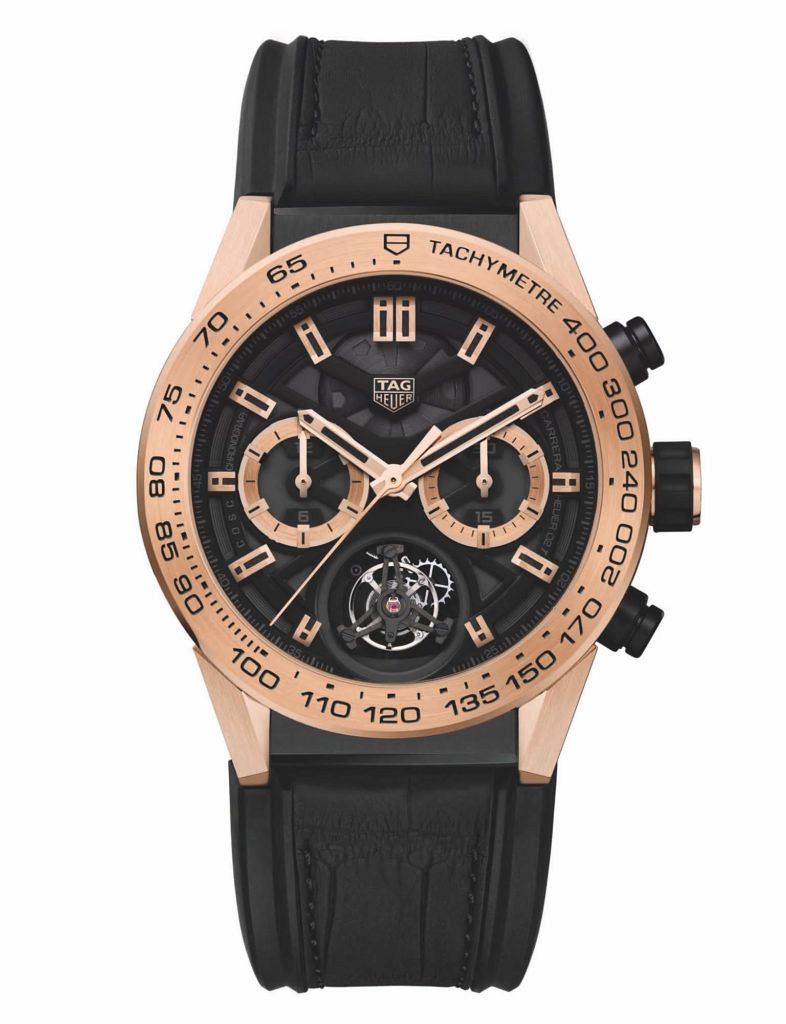 Hemsworth’s watch on the day, the TAG Heuer Heuer-02T in rose gold

“But,” an imaginary Hemsworth interrupts my interior monologue, “I’m Thor, I’m a TAG Heuer ambassador, if anyone can wear a tourbillon in the break off Broken Head, it’s me.”

“A watch should match your lifestyle,” the real Hemsworth adds. “And when I’m home, mine is based around the beach. Heading down whenever it’s on, taking the kids out. They’re having a lot more fun in Australia than they were in the States, I can tell you that.”

And there you go, we circle back to kids yet again. It’s about this time that Matt Damon, who is nearby, overhears that I have three daughters under three and a teenage stepdaughter. As it happens, this is a mirror of Damon’s own family, only my daughters are a few years younger than his, though with about the same age gap. “Oh man, you’re in the blur,” he says, shaking his head. He leans over to his wife and says, “He’s like Chris, he’s in the blur!” He then explains the concept. “The blur, man. You’ll feel like it’s endless, it’s eternal, and then one day, you’ll wake up and you’ll have your life back. It will be over. Luciana now gets clucky when she sees babies. She misses the blur. That will happen too.” 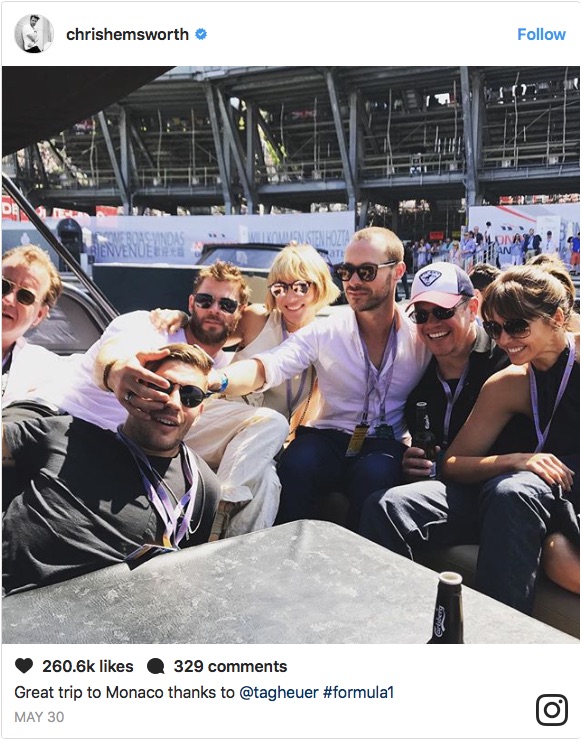 Hemsworth, listening, smiles warmly – he has this uncanny Father Christmas-like twinkle when he smiles, by the way – but it’s a moment of pause, not just mirth. With Port Hercules behind us forming a glittering backdrop, we are in reflective, deeper waters again. Asked what kind of a legacy he’d like to leave as a dad, we happen upon a sweet spot and he continues to elaborate as the topic unrolls. “It’s just to be present. It’s so easy to be distracted.

“I feel like when you look around these days every second person’s got their head in their phone. Your own kids are saying ‘dad look at this’, and you’re like, ‘yeah, that’s cool’,” he says, pretending to wave his kid away with his head bent over an imaginary phone. “I’m guilty of it too at times, but lately I’m making a real effort to just put the thing away. We turn around and complain all the time that they don’t sit still, but what kind of example are we setting? We’re all guinea pigs in the generation of the iPhone and I think we’ve all got to start paying attention to what the ripple effect is.

“Now, I choose an hour or two of the day where I need to look at it, but not be 24 hours a day on call, and just be with them [his kids]. Because you think they’re not paying attention, but they do. You have a close look – they look up and they say, ‘Oh, you’re busy again, it must be work.’ And that breaks my heart.

“My dream would be for them to talk about me as a parent one day and say that he was always there, he played with us, he was present, he listened, he paid attention.”