Celebrating their 175th anniversary this year, Ulysse Nardin is a tried and true manufacture with rich heritage and history. Established in 1846, Ulysse Nardin built its name by fabricating some of the most reliable and high-quality marine chronometers. While most brands of their age remain stuck in the past, refusing to depart from their classic aesthetics, Ulysse Nardin admirably looks to the future – leveraging their vast watchmaking know-how to innovate and produce forward-thinking novelties. As an example, nowadays many consumers are eager to purchase a watch with a modern silicon escapement due to its anti-magnetic properties. Ulysse Nardin was the first manufacturer to release a watch with a silicon escapement, leading the pack 21 years ago back in 2000. This Watches & Wonders, Ulysse Nardin continued their trend of introducing distinct and desirable novelties that you would be hard-pressed to find from another manufacturer. Let’s dive in and recap the three newly announced releases this past week, one of which is not even a wristwatch! 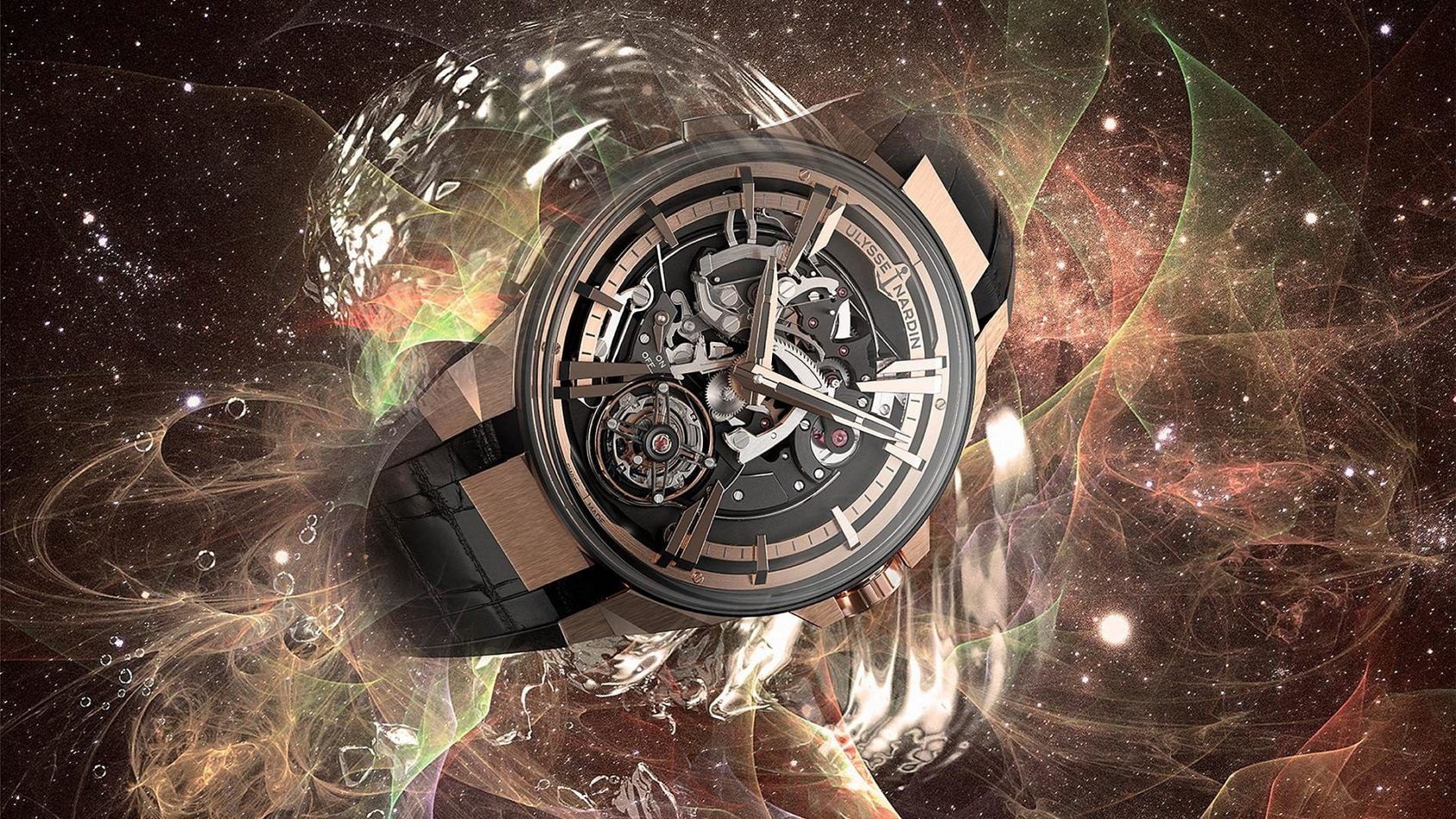 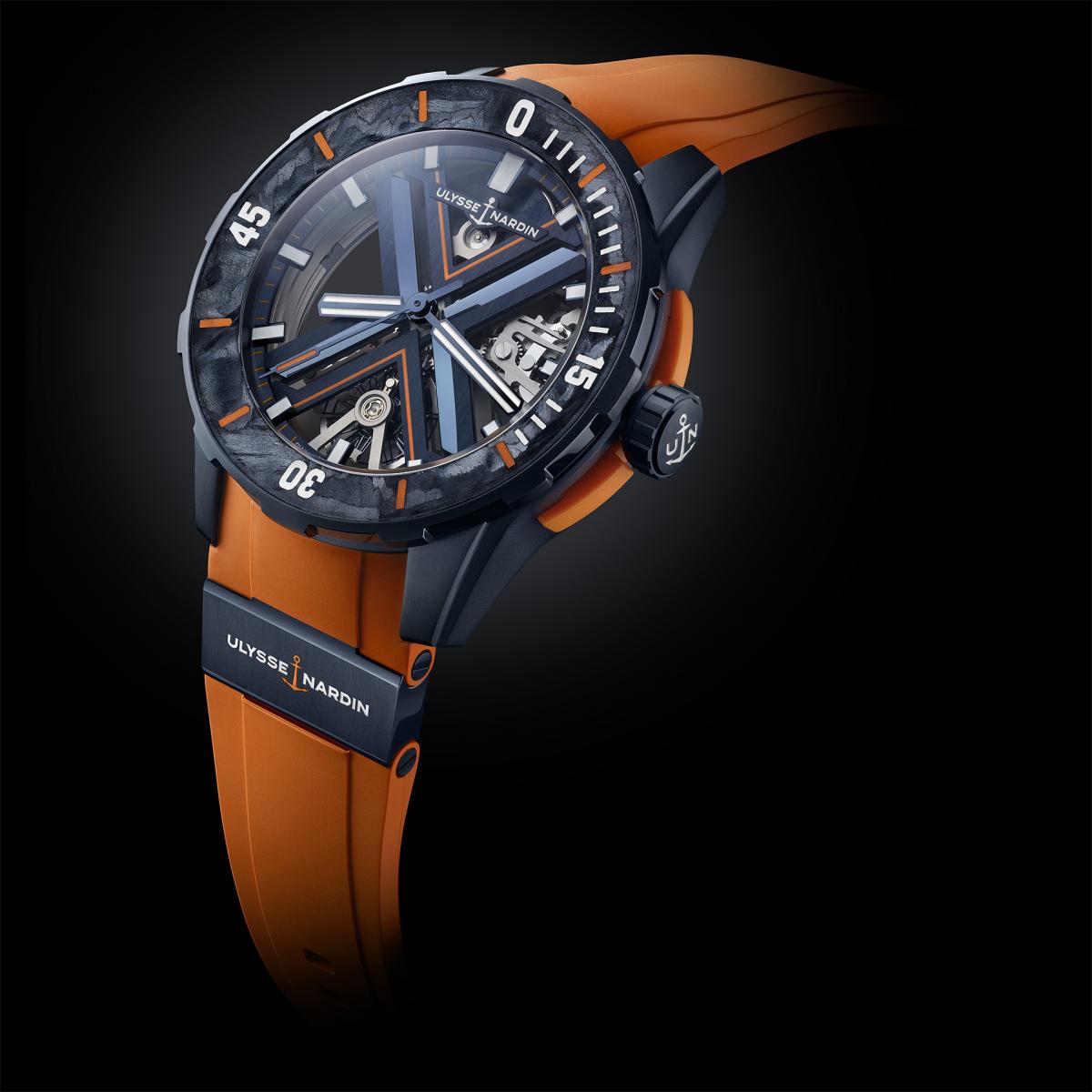 The Ulysse Nardin Diver x Skeleton is fashioned in a blue PVD case 44mm in diameter. The diameter is on the larger side but the lugs appear to be compact and have a camber that will better form the watch around the wrist. The bezel is made of a lightweight aerospace grade blue carbonic that is highly robust and attractive with its natural texture. For a little extra color, the crown guards are rendered in orange to match the accents of the bezel, dial, and orange rubber strap – resulting in a fun and futuristic look. If you would prefer to mute the orange tone a tad, there is also a blue rubber strap available as well. The blue aspects of the dial have a nice satin brush, and for added visibility under water or in darkness the hour markers and hours and minutes hands are coated with SuperLuminova®. 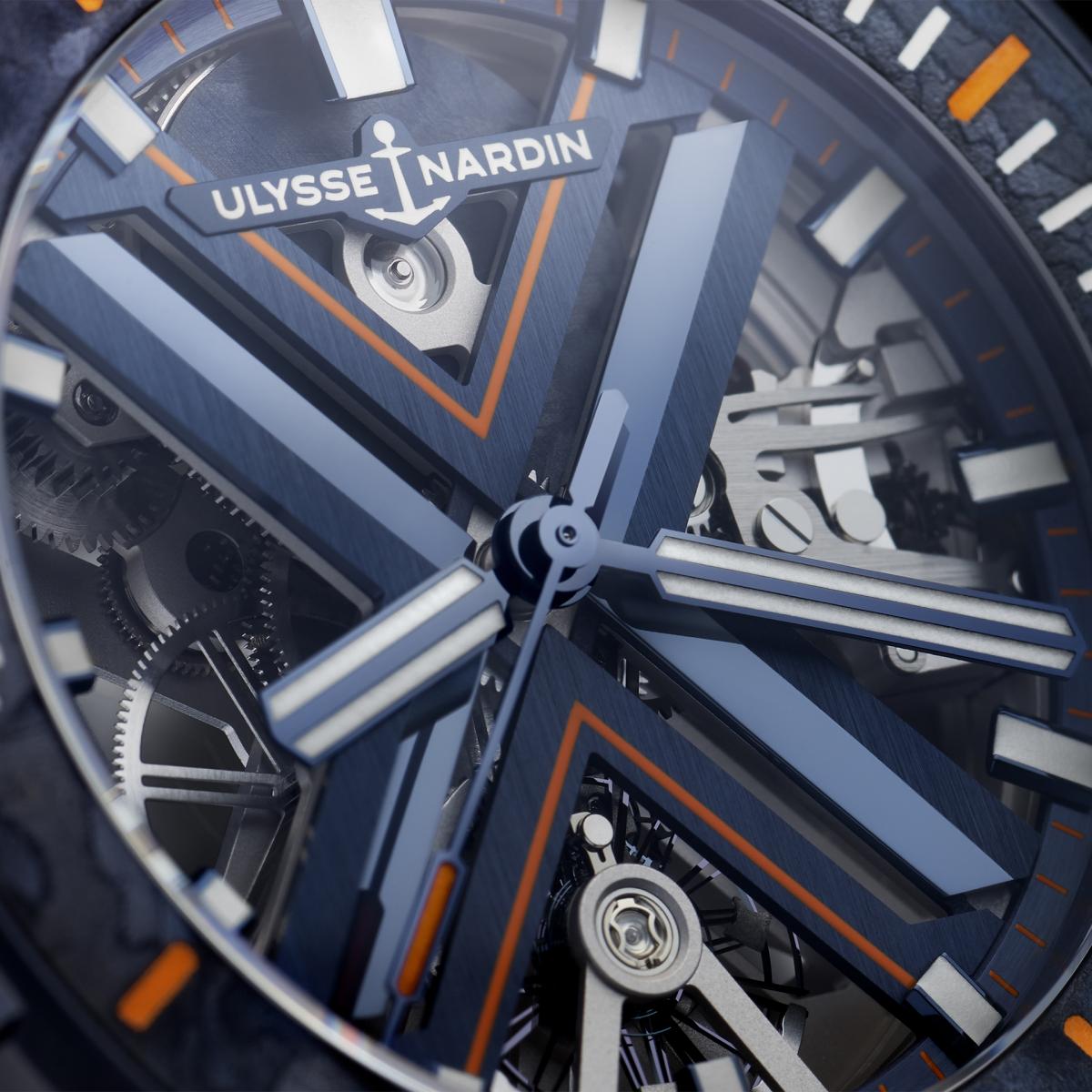 The UN372 movement is a highly complex caliber redesigned to fit the Diver x Skeleton. According to Ulysee Nardin: “The engineering team has completely redesigned the UN371 movement, which is visible through the 44mm case. Originally designed for the Executive Skeleton collection, it has been improved by the addition of an oscillating weight in the shape of the Ulysse Nardin’s iconic X. There is also a barrel cover placed at midday with a blue Carbonium®”

The large X shaped oscillating weight, escape wheel, anchor, and balance are all made of silicon – Ulysse Nardin truly flexing some horological muscle. An added bonus, the movement boasts an impressive power reserve of 96 hours (four days). While most dive watches have relatively homogenous designs, Ulysse Nardin here delivers a premium diver as robust as its peers but with a greater level of movement technology and a vastly more intriguing aesthetic. Price: $22,000 USD, Limited Edition 175 pieces. 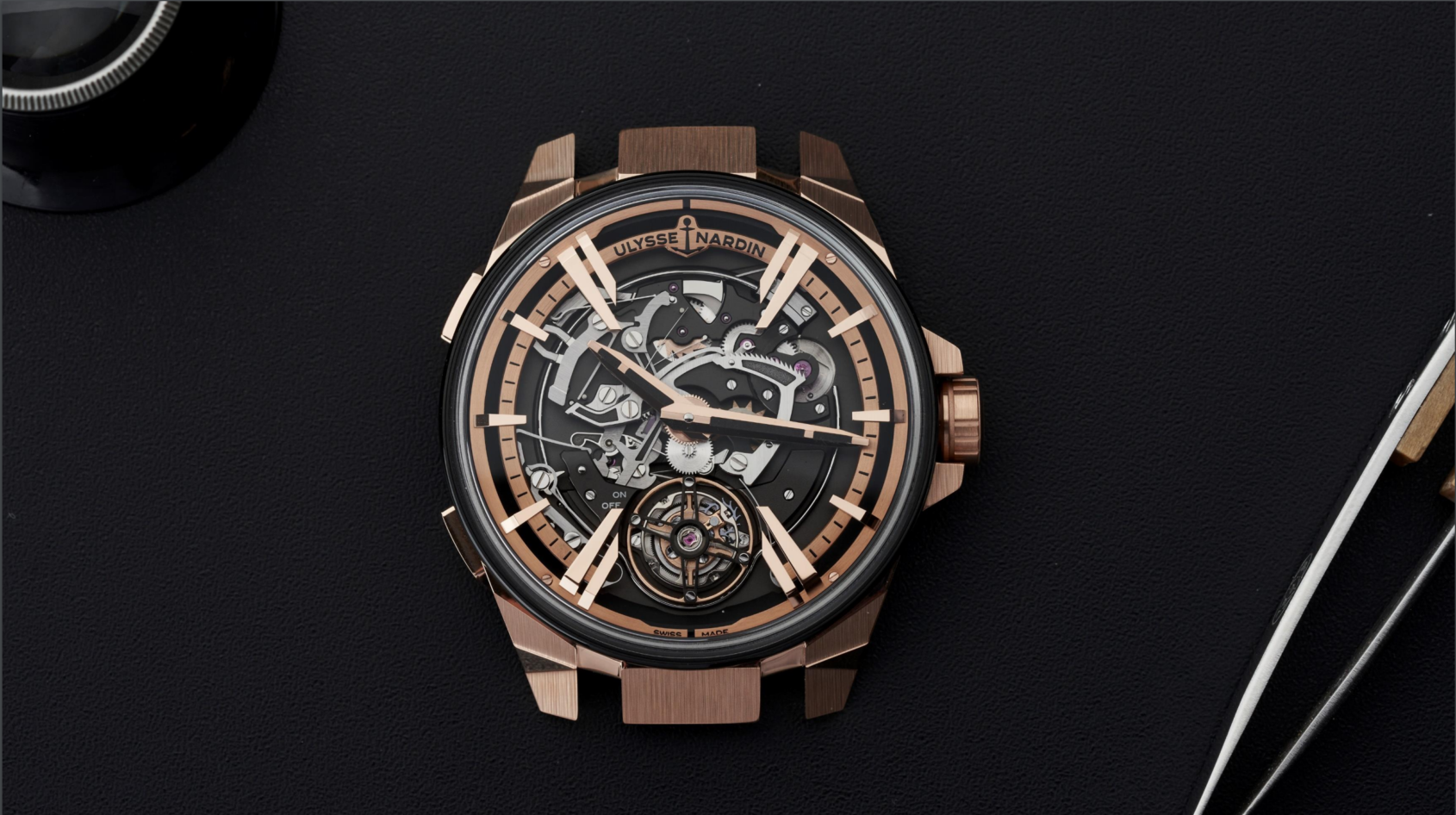 The Ulysse Nardin Blast Hourstriker is a futuristic take on two classic complications. Not only does the watch feature a highly developed hour striker complication, redesigned to be visible on the front facing dial, but a flying tourbillon as well. With so much visible on the dial, it makes sense Ulysee Nardin opted to have a solid rose gold caseback for the Blast Hourstriker. The 45mm case made of black DLC titanium capped with 5N 18kt rose gold was designed to maximize the acoustics of the minute repeater, resulting in a clear and resonating chime. The rose gold elements of the case have alternating brushed and polished facets, the satin brush so rich it almost appears to have the texture of wood. The black DLC titanium has a matte texture that compliments the rose gold and creates a more modern aesthetic for the watch. 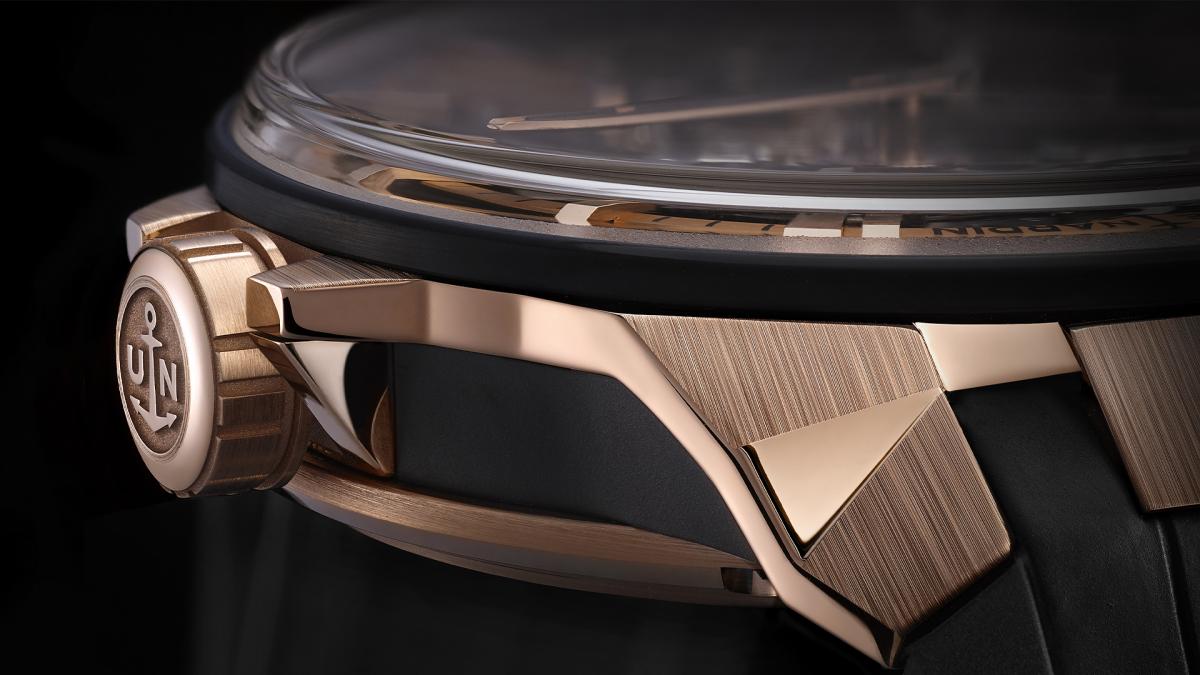 Within the 30 metre water resistant case is the in-house flying tourbillon hour striking caliber UN-621 with 60 hours of power reserve. The automatic rotor powers the watch and its flying tourbillon, but to reload power for the hour striker you must manually wind the watch. I must confess that I wish the caliber boasted a full minute repeater, but the hour striking mechanism that chimes the hours and half hours remains highly complex and it is paired with a flying tourbillon that boasts a silicon hairspring, anchor, and escapement after all. The pusher at 8′ on the left side of the case turns the hour striker on and off, with the pusher at 10′ on the same side used to activate the complication when on. Comprised of 330 components the movement includes an innovative Devialet amplification system. The system features a membrane 3/10th of a millimetre thick, developed by a team of engineers from Ulysse Nardin and the French audio technology company Devialet with a goal to amplify the acoustic waves from the watch gong. The double X logo, a signature of the Blast line, cut into the rose gold caseback actually ensures the security of this sensitive Devialet membrane, which according to Ulysse Nardin, “once in action, basically acts like a hi-fi speaker – releasing and amplifying the gong’s sound.” The watch is available on three strap configurations: alligator, velvet, and rubber. Price: $104,000 USD 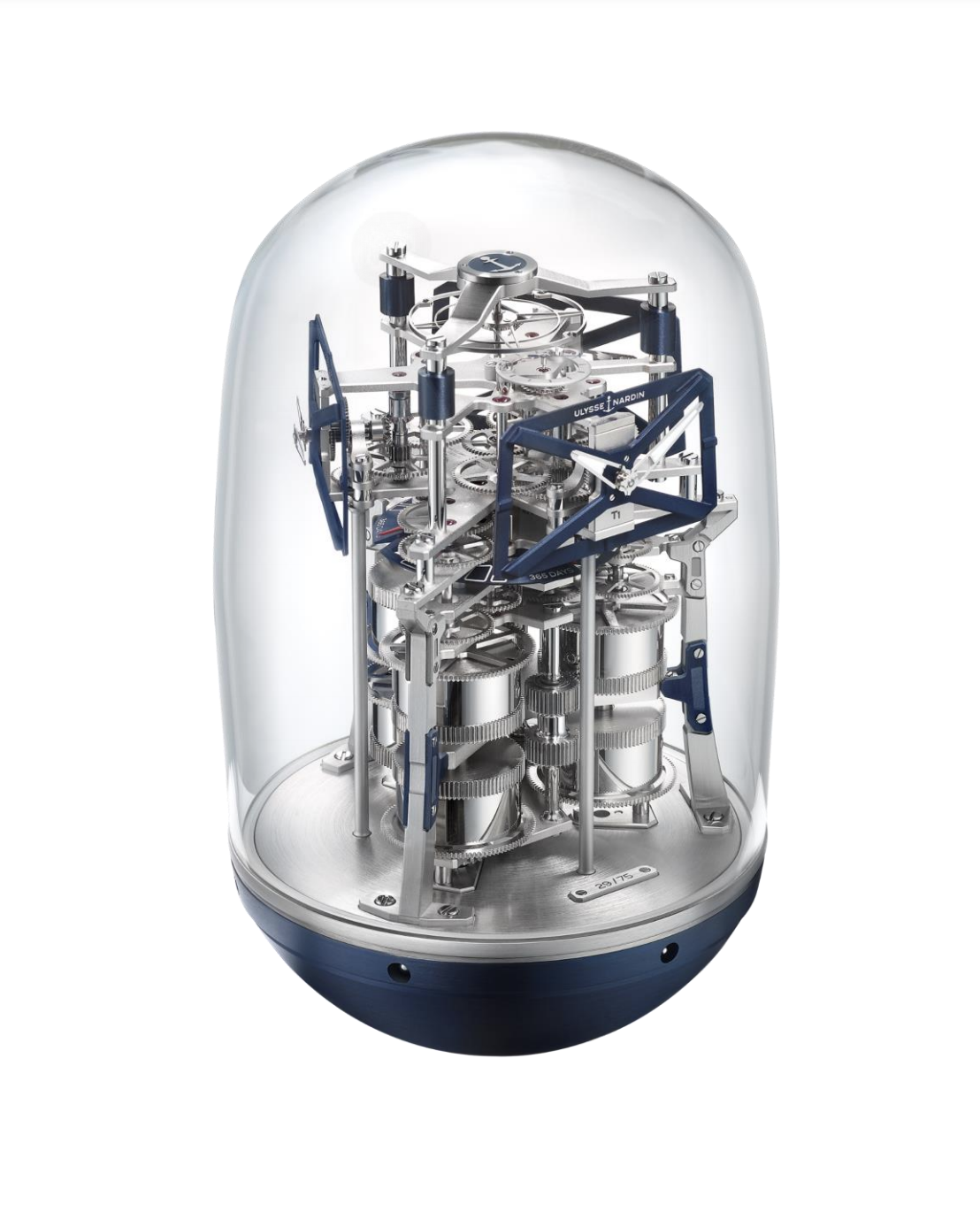 A nice change of pace, in terms of novelties this year, Ulysse Nardin has introduced the UFO: a table clock developed in collaboration with Maison L’Epée comprised of 675 components. The futuristic table clock has everything on display behind the blown glass, with owners able to admire all 675 components in action. The UFO is highly complicated, its manually wound UN-902 caliber powering three separate time zones and their corresponding dials. Now you might be thinking why is the bottom of the UFO not flat? Isn’t it a table clock? The answer is Ulysse Nardin, driven and inspired by nautical themes, developed a blue half-spherical aluminum base that holds a tungsten mass which allows the UFO to ebb and flow like the waves out at sea.

Ulysse Nardin explains: “When it is nudged gently, weighing 7.2kg, the UFO swings up to 60° from its axis – an amplitude of 120 degrees – and the engineers have accurately calculated the centre of the gravity/mass/inertia ratio, which allows UFO to swing neither too fast nor too slowly and without significantly affecting the operation of the balance. The extra large 49mm balance wheel was designed to have a 0.5 hz beat rate and a deadbeat seconds mechanism. This, along with six extra large barrels, helps the UFO achieve its incredible power reserve of one year. Yes, you read that right. So don’t worry about having to routinely wind this mechanical artwork. Once a year all it takes is 40 winds with the included key and you are all set. Price: $41,000 USD, Limited Edition of 75 pieces.