Editor’s note: A perennially common question in the horological hemisphere is, “What is the next BIG future collectible timepiece?” It’s a pretty loaded question, and usually one answered with, rather obviously, nothing more than conjecture and anecdotal hypothesis. But, if we’re being honest, the best indicator of the “next big thing” is when there is a constant murmur in the wristwatch community about the same watch, a constant simmering of whispers that keeps on throwing up one model. That model is this, the ETA-powered Tudor Black Bay “Smiley”. Whether it’s the simpler ETA 2824-2 movement, the slimmer case, “Rose of the Tudor” motif on the dial, or a combination of all three, there are many, many people saying this is the next watch to go pop.

As a brand, Tudor is a lot like Rocky in that Rolex’s little brother is a plucky fighter come good. Unlike Rocky, Tudor’s releases just get better and better with each passing year. Baselworld 2014 saw two big crowd-pleasing releases from Tudor, and a new range that is understated in the extreme, though still enticing. 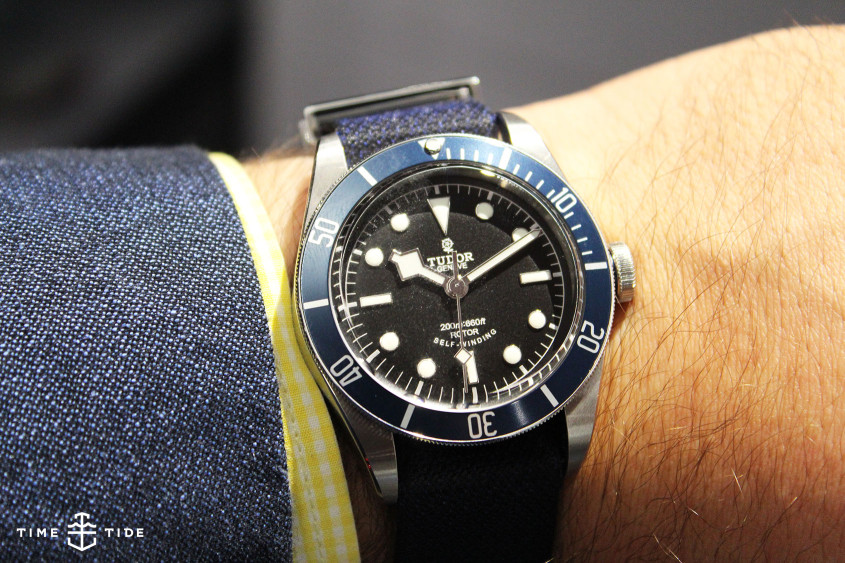 We’ll talk more about the Ranger and the Style later, but for now let’s focus on the undisputed star of the show – the new Black Bay in Blue (which we suspect will very quickly and ubiquitously become known as the ‘Blue Bay’). We managed to spend some quality time with this watch in a crowded press briefing, and snap a few live, on the wrist shots. 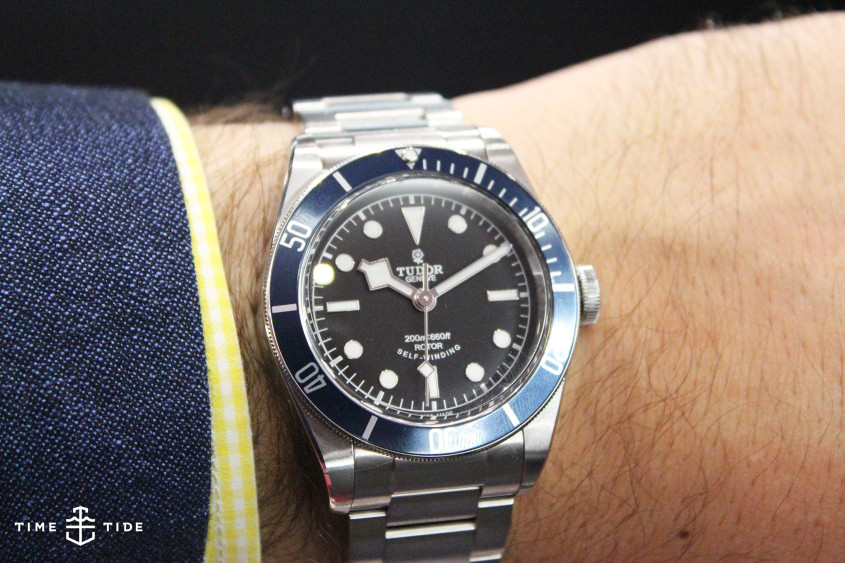 This Black Bay Blue is essentially the original Black Bay, but with blue and white detailing. It sounds like a simple enough change, but it totally alters the feeling of the watch. Gone are the warm tones of red and gold, which evoke a vintage feel – especially combined with the coloured, aged-looking luminous markers of the original. 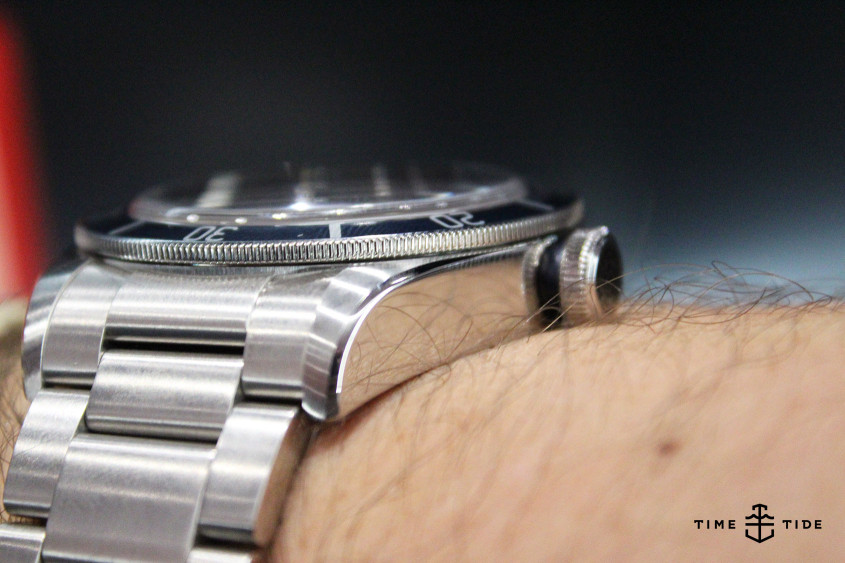 The blue of this model, for which everyone seems to have adopted the romantic Dulux description of  ‘Midnight Blue’, is present throughout the watch. Most noticeably on the bezel, but also on the crown and on woven fabric strap and distressed leather strap options. 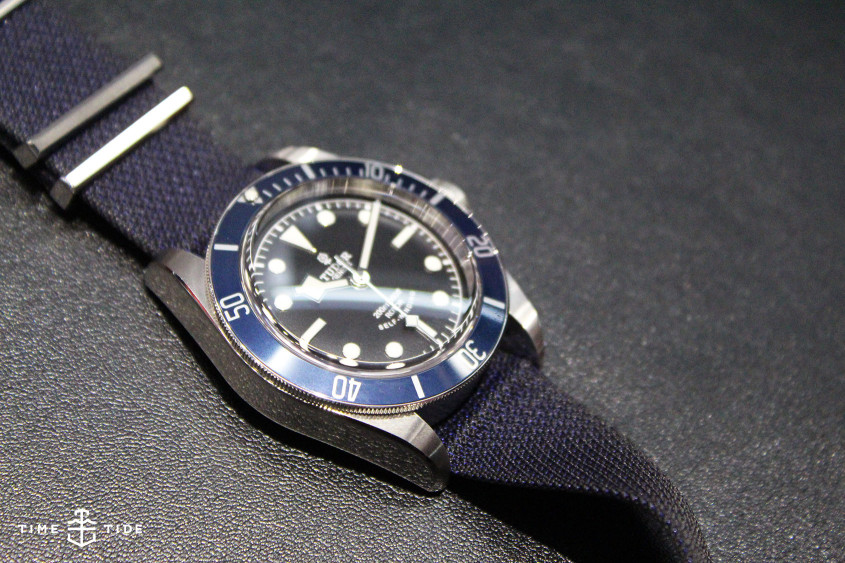 It’s good to see that Tudor are still drawing on their rich heritage for inspiration (the Heritage line is now their most significant collection), but it’s also good to see that they aren’t creating mimicked reproductions of the past. The most significant critique of the original Black Bay was the use of the ‘aged’ luminous material. I think it worked in the context of the warm palette of that watch, but on the Blue Bay faux vintage lume would have been a bad idea. The icy white snowflake hands and applied indices give this watch a clean, cold and contemporary feel that contrasts nicely with the warmth of the Red version. 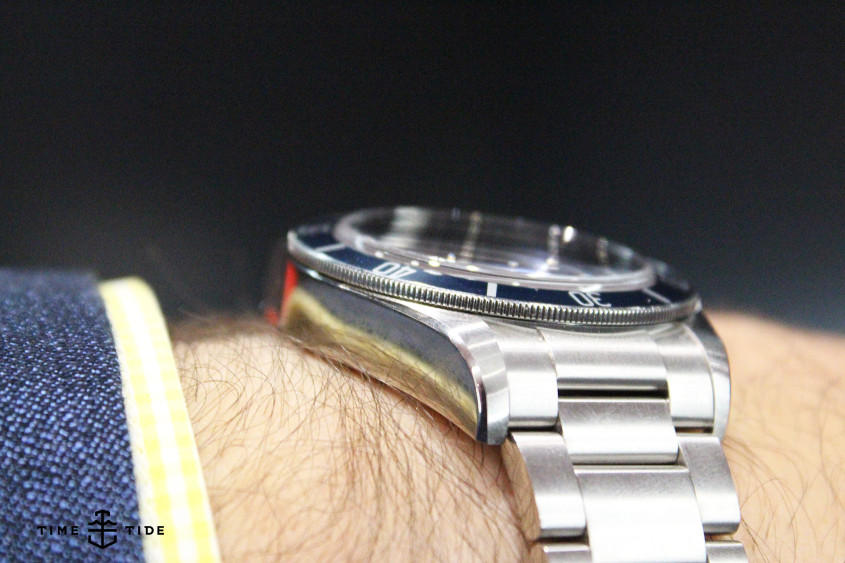 Because of the crispness of this watch, I think it works best on the bracelet. It’s a personal preference and it certainly looks great on the other strap options (especially the woven fabric strap), but for me the combination of cool blue and Tudor’s crisp case finishing makes it a perfect match with the metal.

The great news is that the new model is the same price as the 2013 version. Expect an RRP of circa $4000 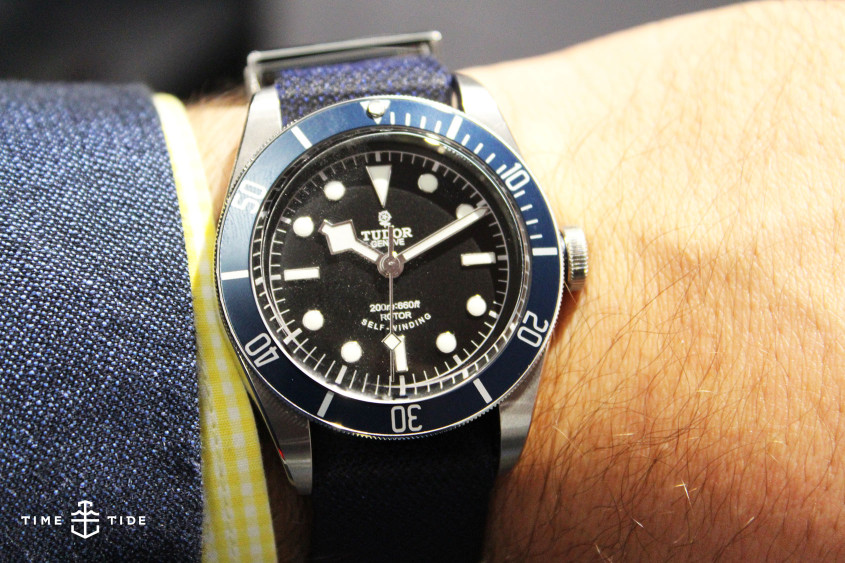