The Seiko Presage SPB293 is the essence of Japanese porcelain mastery

The Seiko Presage line has long been a great value proposition. From the evergreen Cocktail Time range, the patterned Sharp Edge to this, the Craftsmanship collection and their porcelain dials, there’s plenty to choose from. The latest in the collection, comes with an entire storyline as well, taking you back to the heart of Japanese porcelain making, Arita. The Seiko Presage SPB293 inherits some familiar design cues from its porcelain predecessors, yet brings a pared-back aesthetic that is sure to enthuse many. 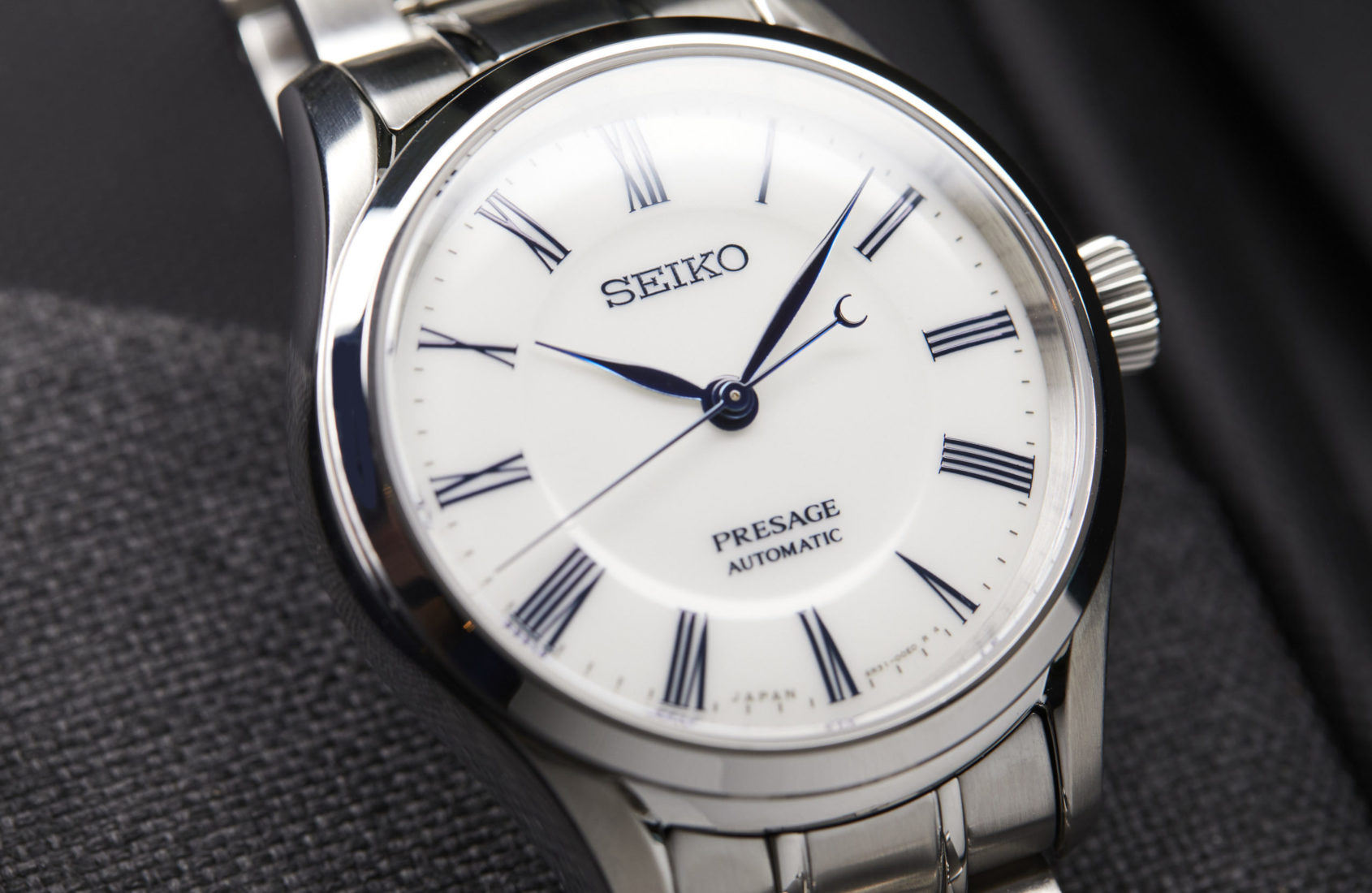 This is one of those dials that you simply have to see in person to experience fully. You’ll laugh, but it genuinely looks crafted rather than manufactured. With its ever so slight uneven surface, the light lingers on one particular spot, before flowing onto the next, as you turn the watch around. Owing to the many applied and fired layers of porcelain, there’s a particular lucence to the dial that’s nigh impossible to capture on camera. The step has a fluidity to it, taking your eye to the elongated printing of the Roman numerals, which conform to the curvature of the dial. The other printing is also applied crisply, and almost perfect – I’d even take it to the next level, eliminating the Presage automatic printing altogether. This would make for a perfectly minimalistic dial, owing to the exclusion of a date window, thank the horological gods. 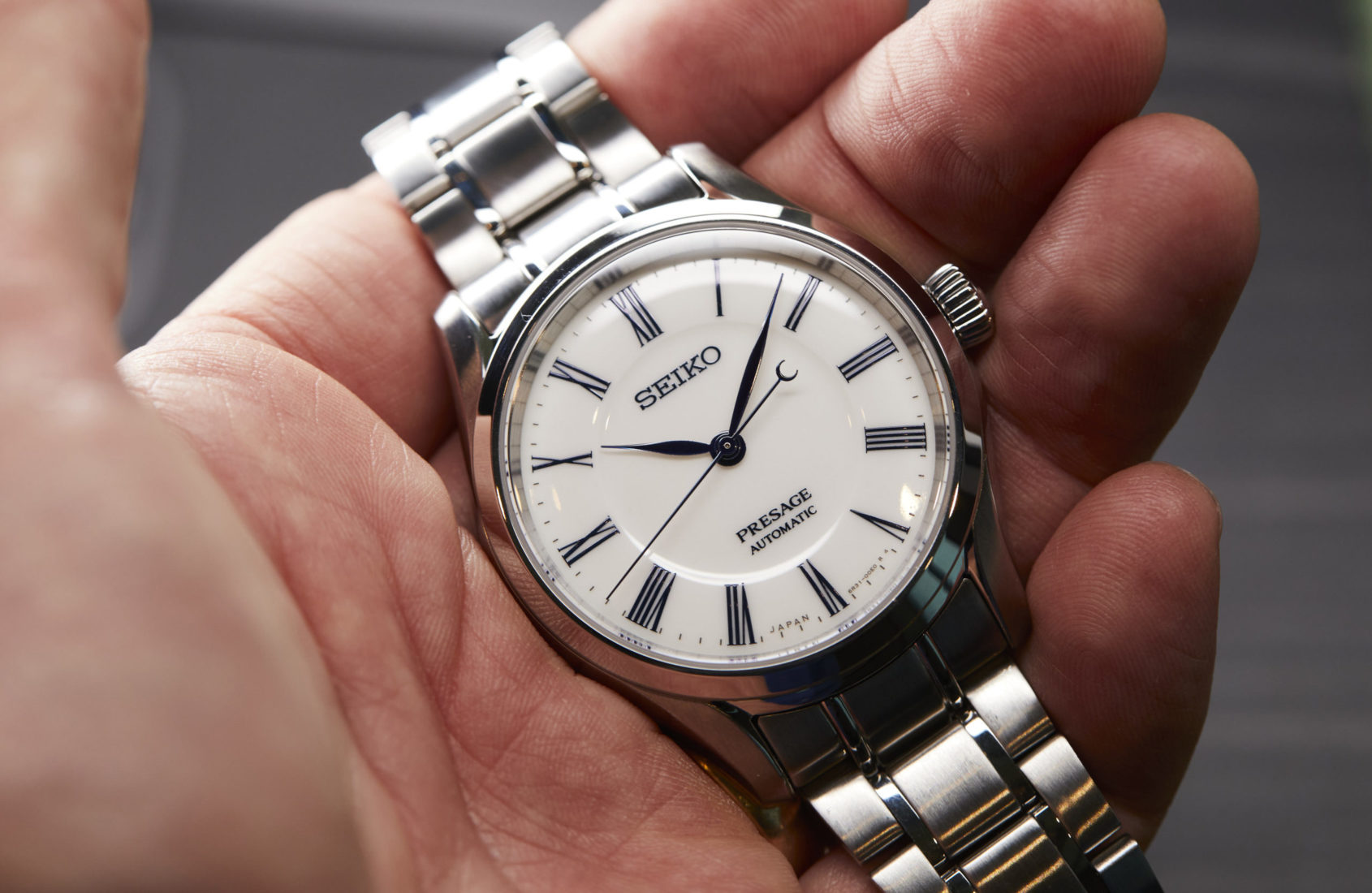 The handset is just as elegant as the numerals, with needle-tipped feuille hands, and a pretty seconds hand with a crescent moon counterbalance. The only slight niggle with the hands is that they seem to be painted, rather than heat-blued. While they still have a pleasing effect, I’ve not seen a handset that can replicate the effect of blueing through paint. 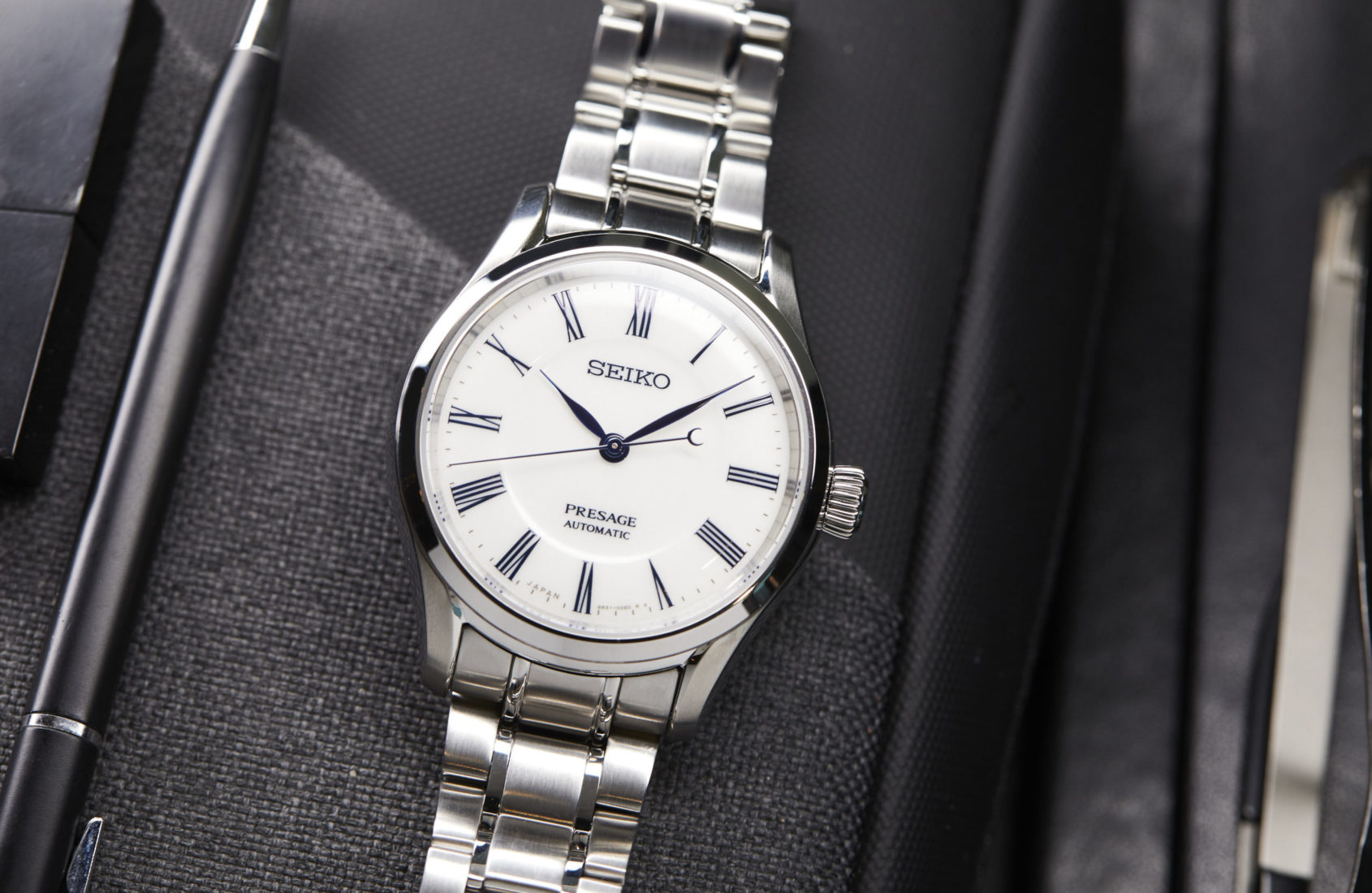 With a diameter of 40.5mm and a lug-to-lug of 48.8, the SPB293 is very much in line with what we’ve come to expect from the Presage line, though it is a tad larger than one would expect from an out-and-out dress watch. With a highly polished bezel that leads down to a shiny chamfer along the inside of the curvy lugs, the case has a lot of interchanging finishing. This makes for a bit of a light show, even more so considering the polished links in the bracelet. Should you also lament the non-tapering nature of Seiko bracelets, the 20mm lug width should make it a breeze to pop in a leather strap, which will also tone down the look on the wrist. 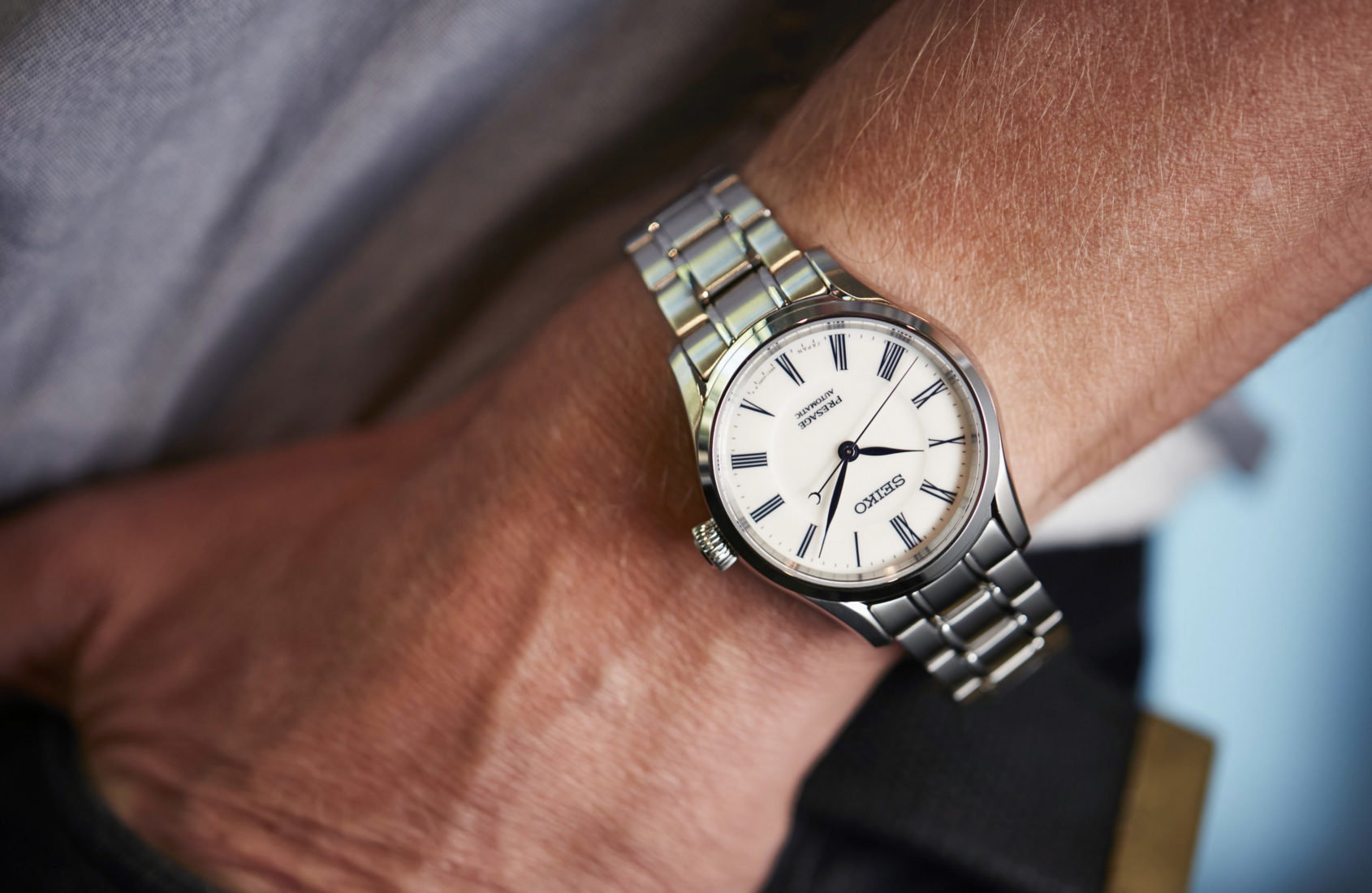 Considering the domed sapphire crystal and display caseback, the SPB293 measures in at 12.4mm in height, which isn’t insignificant considering the style of the watch. It is, however, proportional to the rest of the measurements, giving the case a sportier feel which is further accentuated by its 10 bar water resistance.

Yes I used the w-word. Many movements are labelled as such, but I’d like to believe that the 6R31 is a true definition of its meaning. Adding an extra 20-odd hours of power reserve over its predecessors, the 6R1X movements, it’s a calibre with lineage spanning back to the 1970s. With many iterations throughout and significant upgrades throughout the years, it’s a really solid offering. The stated accuracy of -15/+25 seconds per day and a beat rate of 21,600 vph are acceptable, if somewhat unspectacular. 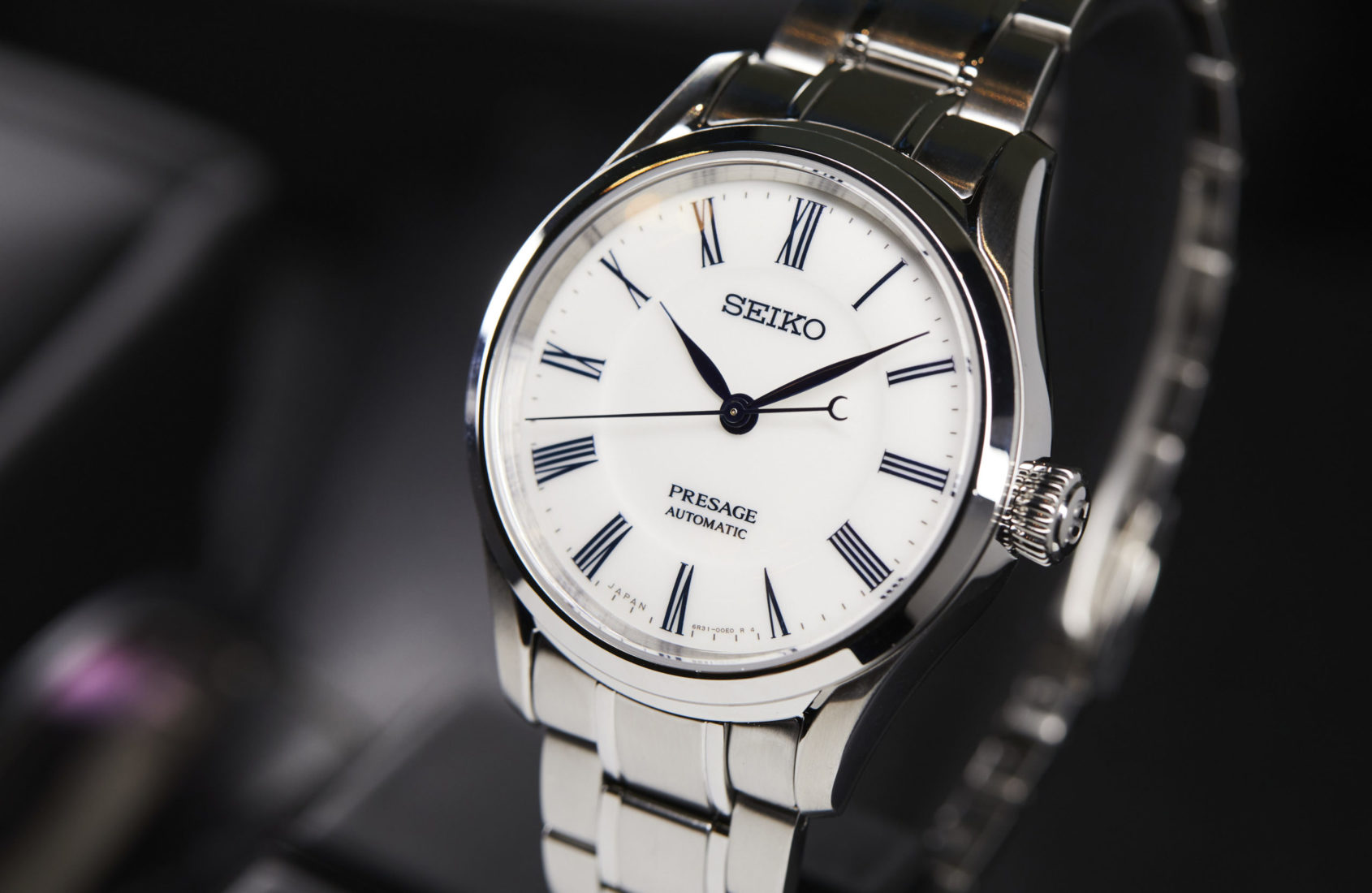 This Presage is targeting a niche, as porcelain dials are far and few between, with only a handful of examples coming to mind. It’s a unique alternative to enamel, and a really handsome one at that in the SPB293. Seeing this movement with reduced proportions, virtue of a manually-wound movement, would make the large price premium over other Presage models much more reasonable.