Richard Mille never shy away from a piece that’s a little bit “out there”, whether that’s the Bonbon collection, Bubba Watson’s RM38 Pink Watch or the brand new Richard Mille RM 88 Smiley. Incorporating sunshine and rainbows, the Smiley takes inspiration from a 1972 publication of France Soir, which saw the trademarking of the ubiquitous yellow-tinged laughing face. Akin to any other Richard Mille, the RM 88 Smiley is an impressive technical feat, with a newly developed automatic tourbillon inside. 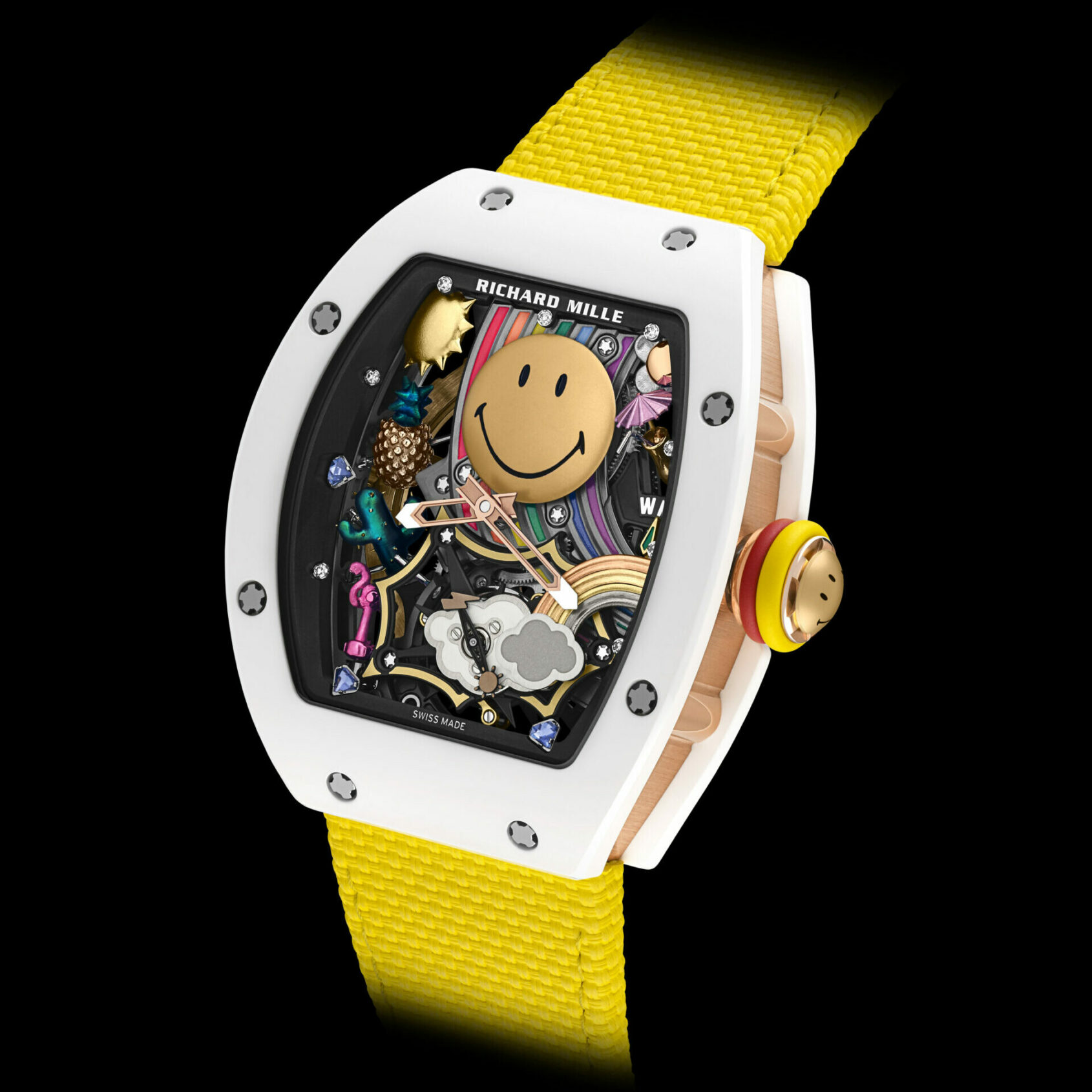 Dialside, there’s an impressive amount of detail, even when considering the amount of attention Richard Mille normally pays to their work. The dial elements are all finished by hand, going to the extent of individually polishing the spines of the little cactus to remove its green PVD coating. 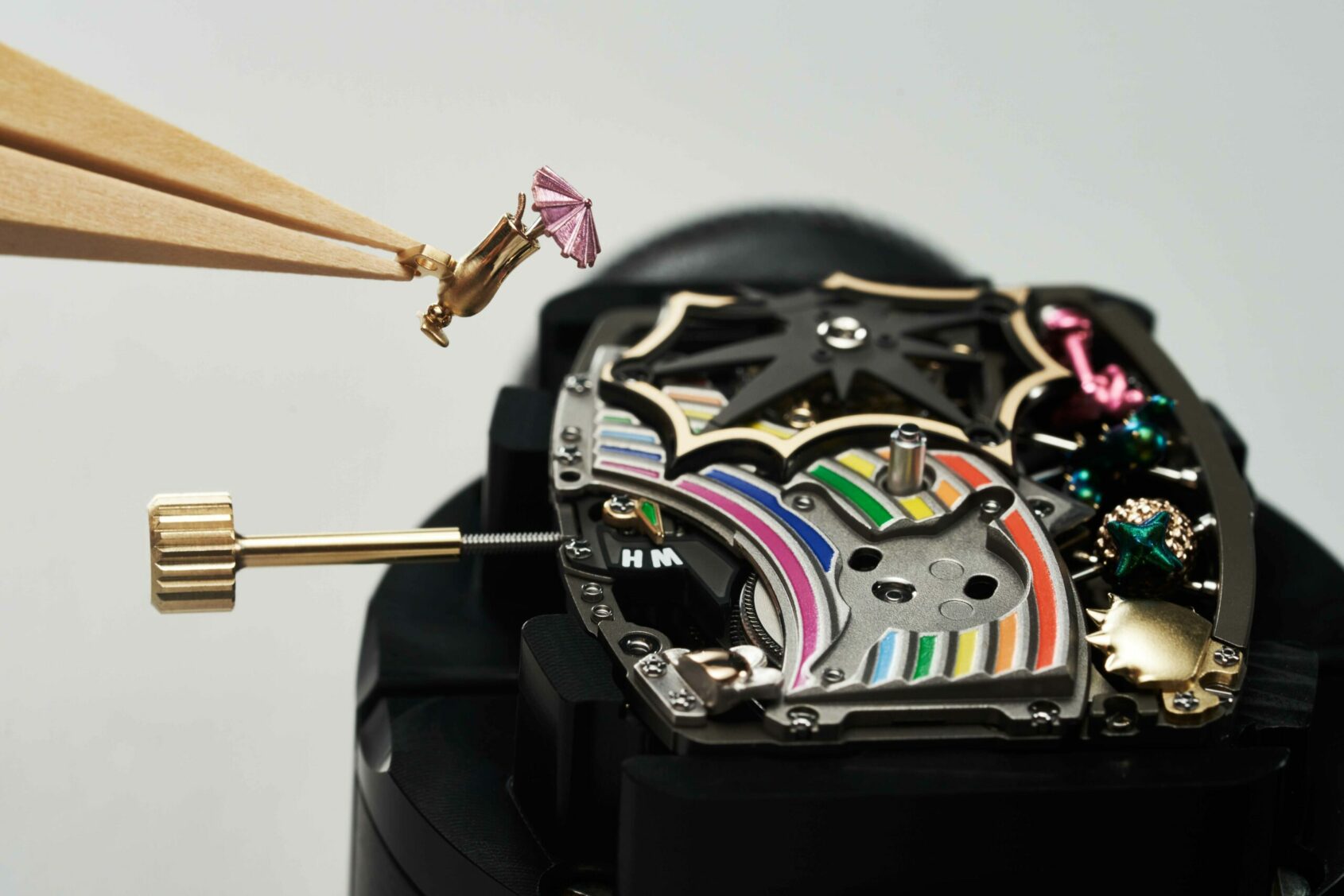 The cocktail glass sitting to the right of the Smiley is composed of four solid gold parts, while the gold flower above is mirror-polished with rhodium-plated petals. The headlining feature is naturally the Smiley, in micro-blasted and painted yellow gold, presiding over the varnished, hand-painted rainbow. I could go on and on, noting each of the tiny details and figurines, but that could be an article in itself. 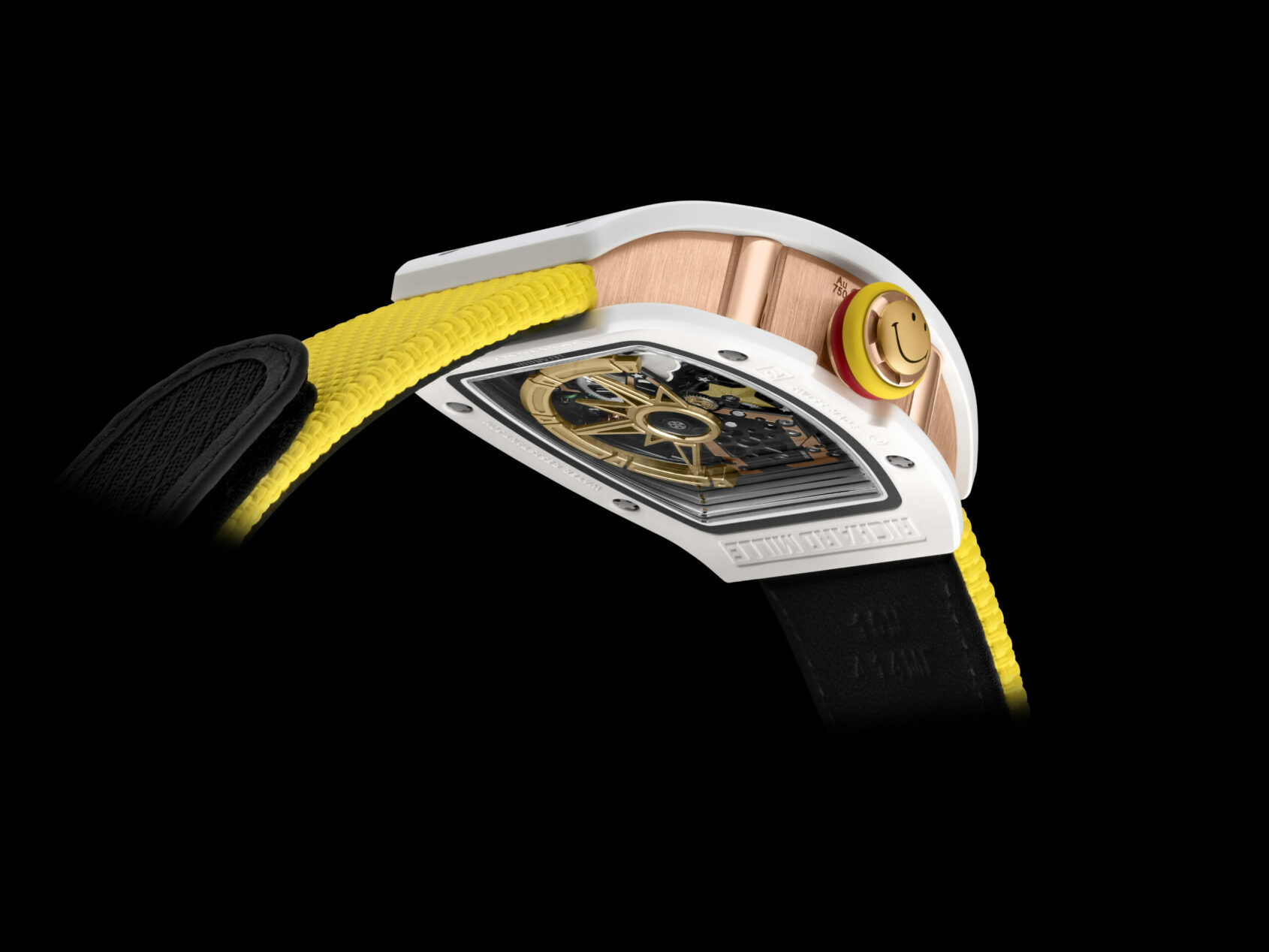 ATZ ceramic, or alumina-toughened zirconia, makes up the top and bottom portions of the case, split by a midcase in red gold. Measuring in at 48.15mm x 39.74mm and 13.3mm in height, it’s an intriguing dichotomy between a high-tech, scratch-resistant ceramic and more traditional material like red gold. 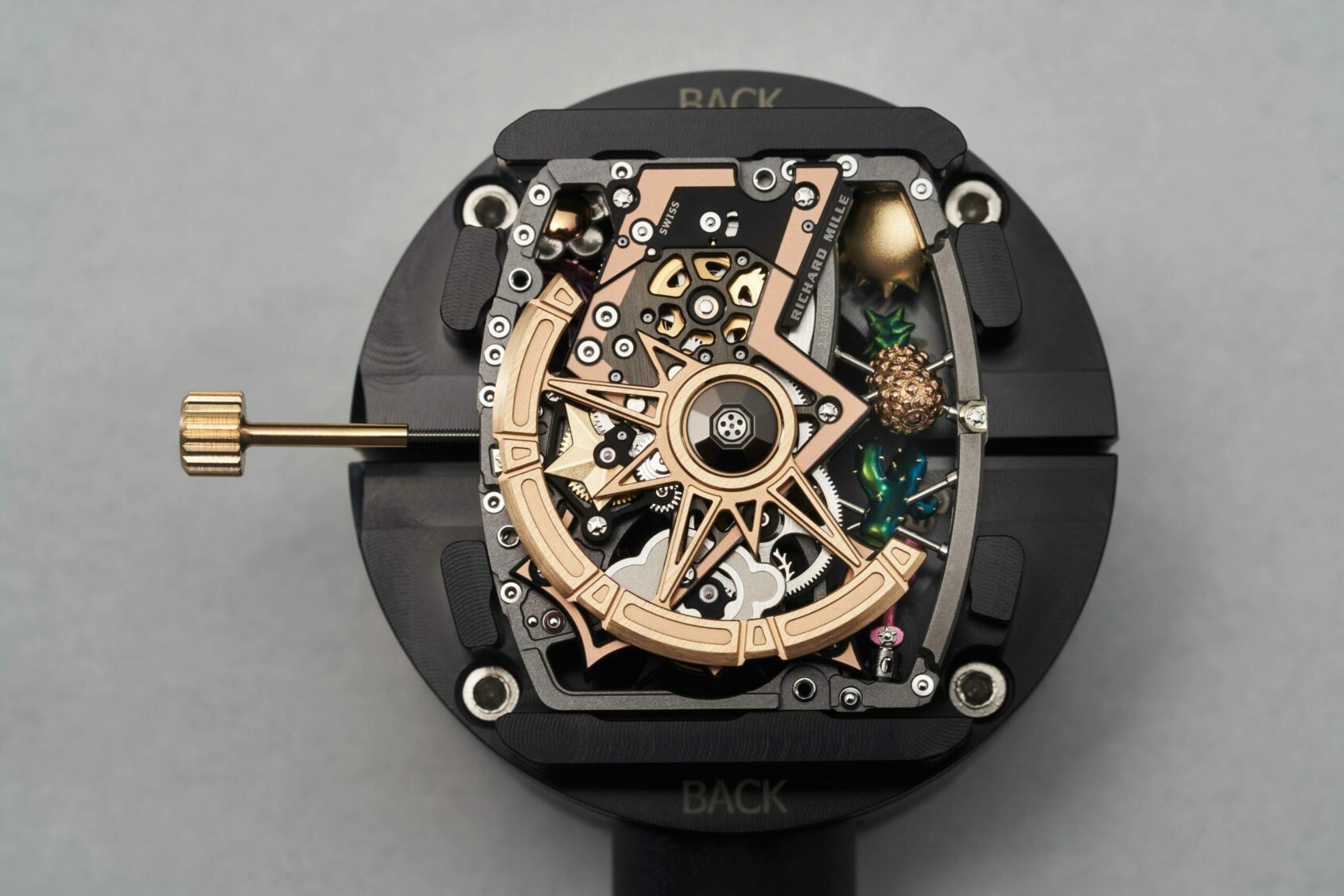 The RM88 comes equipped with a brand new calibre – the CRMT7. With the addition of numerous 3D dial elements, Richard Mille looked to create a movement with enough room to not only house them, but display them in their best light. The time-only calibre is extensively skeletonised as has become the fashion in RM movements, and is equipped with a tourbillon that sits hidden in the clouds. With grade 5 titanium bridges and baseplate, the movement is finished with extensive hand-polishing, offering around 50 hours of power reserve. 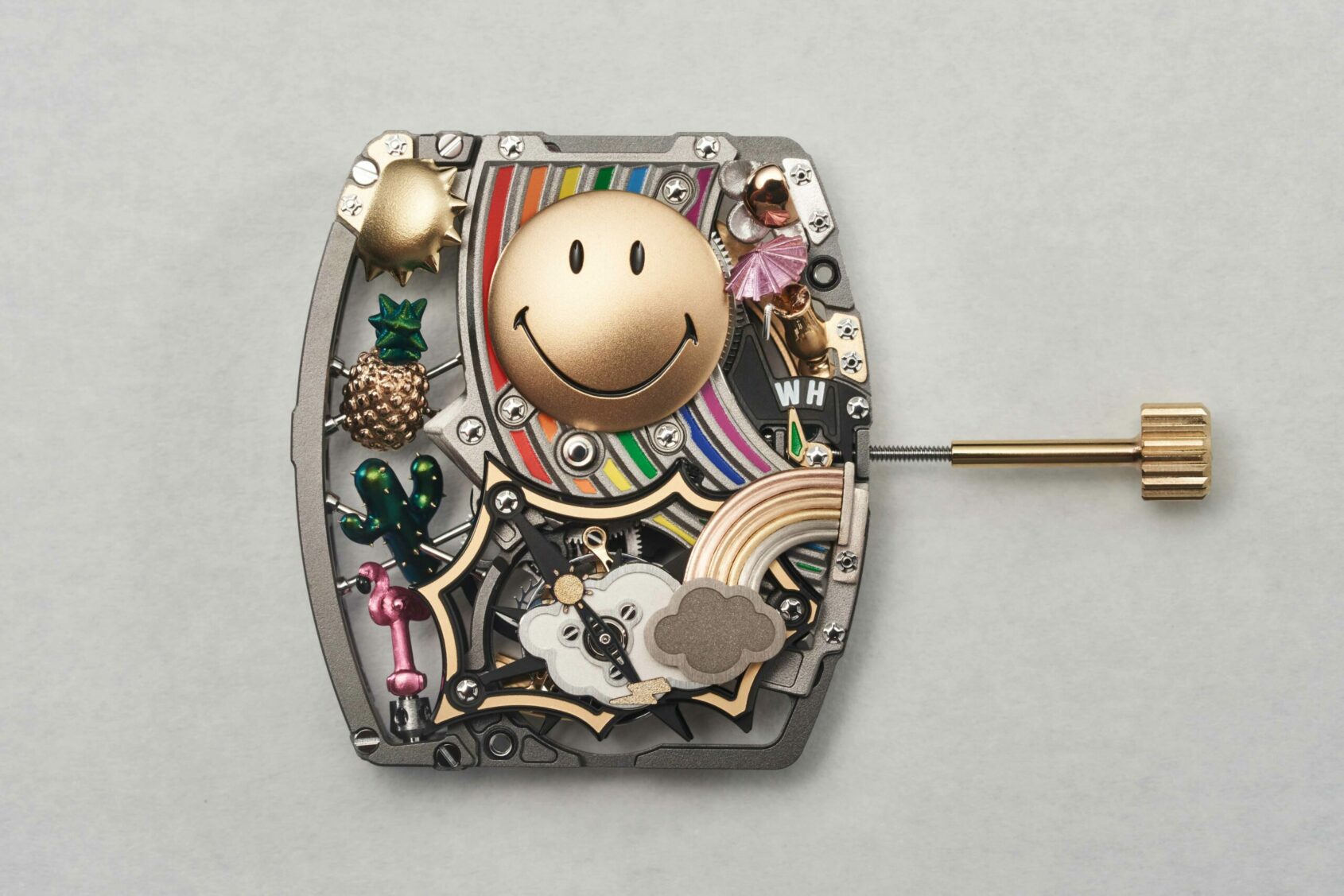