The brief at Brellum is usually quite simple, I presume. Create well-specced watches, in limited numbers, while minimising mark-ups. That last part is an often-heard filler for independent brands, but it’s also where Brellum differs from many — offering proper substance. The new Brellum Pilot LE.3 Power Reserve Chronometer happens to be one of the more incremental upgrades — an evolution, rather than revolution, of the Pilot Power Gauge that preceded it. 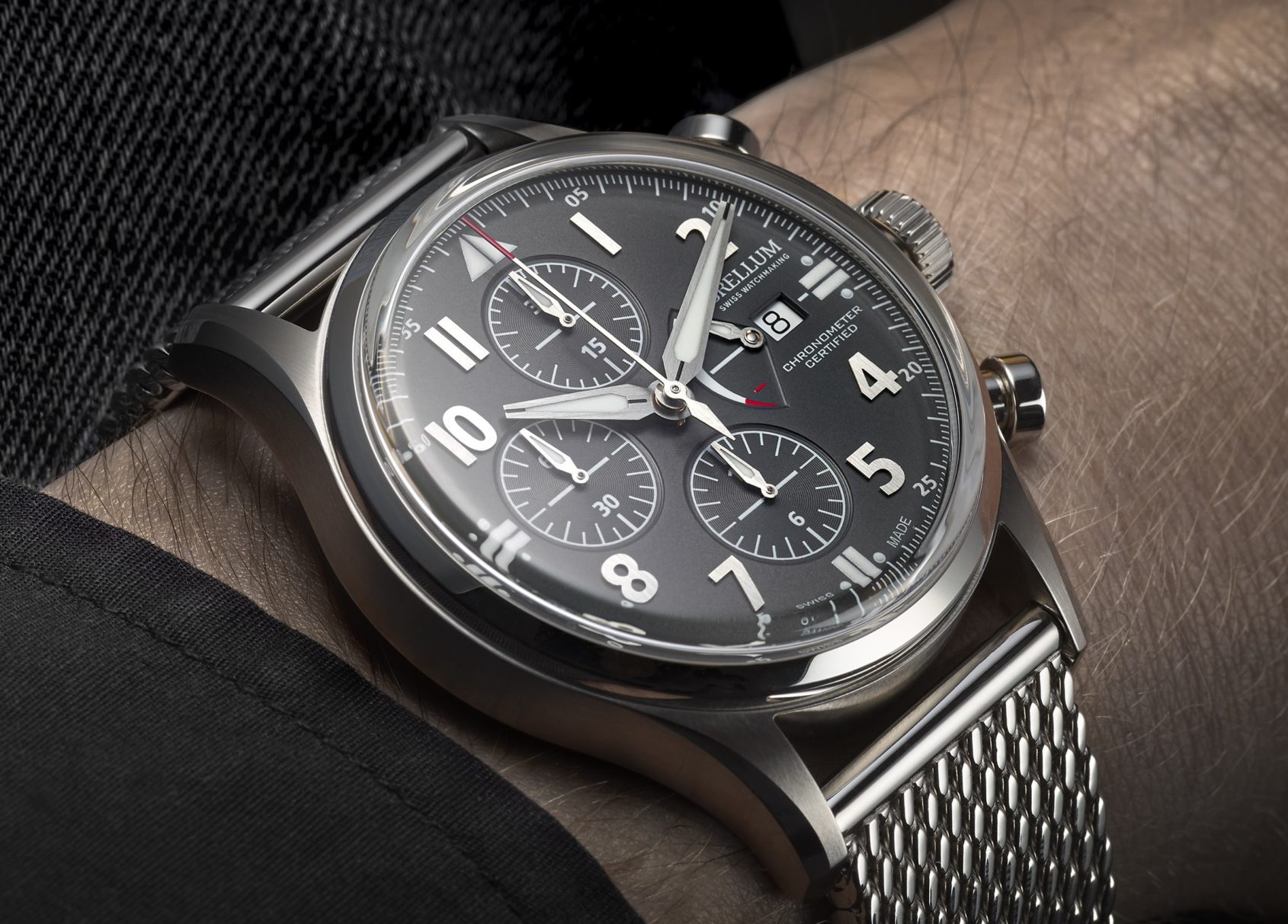 There’s lots to cover with the dial of the Pilot LE.3. The layout is one we often see with flieger chronographs, with the sub-dials arranged in a 6-9-12 o’clock orientation. To balance the leftward skewing of the dial, Brellum squeezed in a recessed power reserve indicator alongside the date window at 3 o’clock, and frankly I’m surprised by the inclusion of either of those complications. While nifty to have, the power reserve indicator is made obscure by the automatic movement; its exclusion would give more breathing room for the printing, which awkwardly sits either side of the date window.

What I do love is the horizontal line bisecting circularly-grained sub-dials. It instantly reminds me of an artificial horizon or turn indicator gauge on an aeroplane’s instrument cluster. The 12 o’clock marker takes a familiar triangular shape, though without the dual dots on either side. The dots are instead printed alongside two rectangular markers at 3, 6 and 9 o’clock, ending up looking like pseudo-division signs.

Where this dial really shines for me is its perceived depth. Considering the sunken-in sub-dials, puffy printing and the applied Arabics elsewhere, there are already several layers before you get to the hands. Speaking of which, they’re a standout as well. Taking a classic sword shape, Brellum softens the angles and caresses them into a tuning fork shape, with luminova suspended betwixt the prongs. 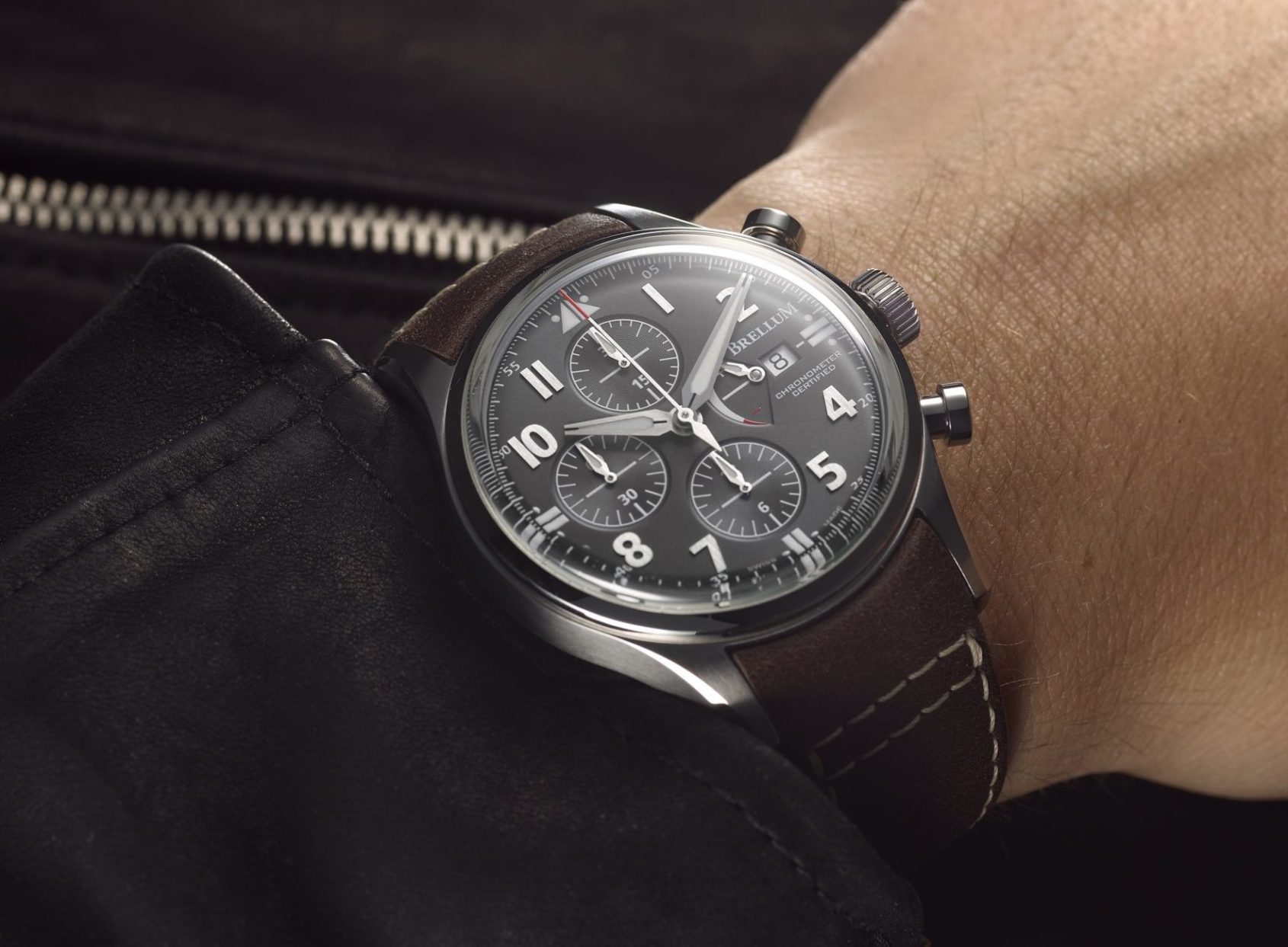 Looking at the case of the Pilot LE.3, classic pilot inspiration is clear. The polished feature line starts at the tip of the lugs, decreasing in width as it approaches the case, contrasting the brushed overall finish. While the crown isn’t a true flieger onion-style, it certainly is large enough to fit the 41.8mm diameter of the case, carrying an engraved carbuncle gemstone, though I once again warn you, dear reader, when googling the term ‘carbuncle’. Flanking the case on either side are two large pump pushers.

As for the overall proportions and aesthetics, I’m a big fan of this case. Brellum clearly have confidence in their choices, adding just the right amount of flair to an otherwise simple tool watch.

The eagle-eyed among you will have noticed that the case of the Pilot LE.3 resembles that of the Pilot Power Gauge very closely. You’d be right, though it does come with some upgrades and new features. The clearest improvement in terms of functionality would be the water resistance which is doubled, now at 100 metres. A novelty for the Pilot LE.3 is the Milanese mesh bracelet, which is included alongside a contrast-stitched leather strap with deployant buckle and the tools you need to swap between the two. It’s worth noting that the leather strap is nicely fitted to the case, a trend certainly on the rise, and one that I’m a fan of. 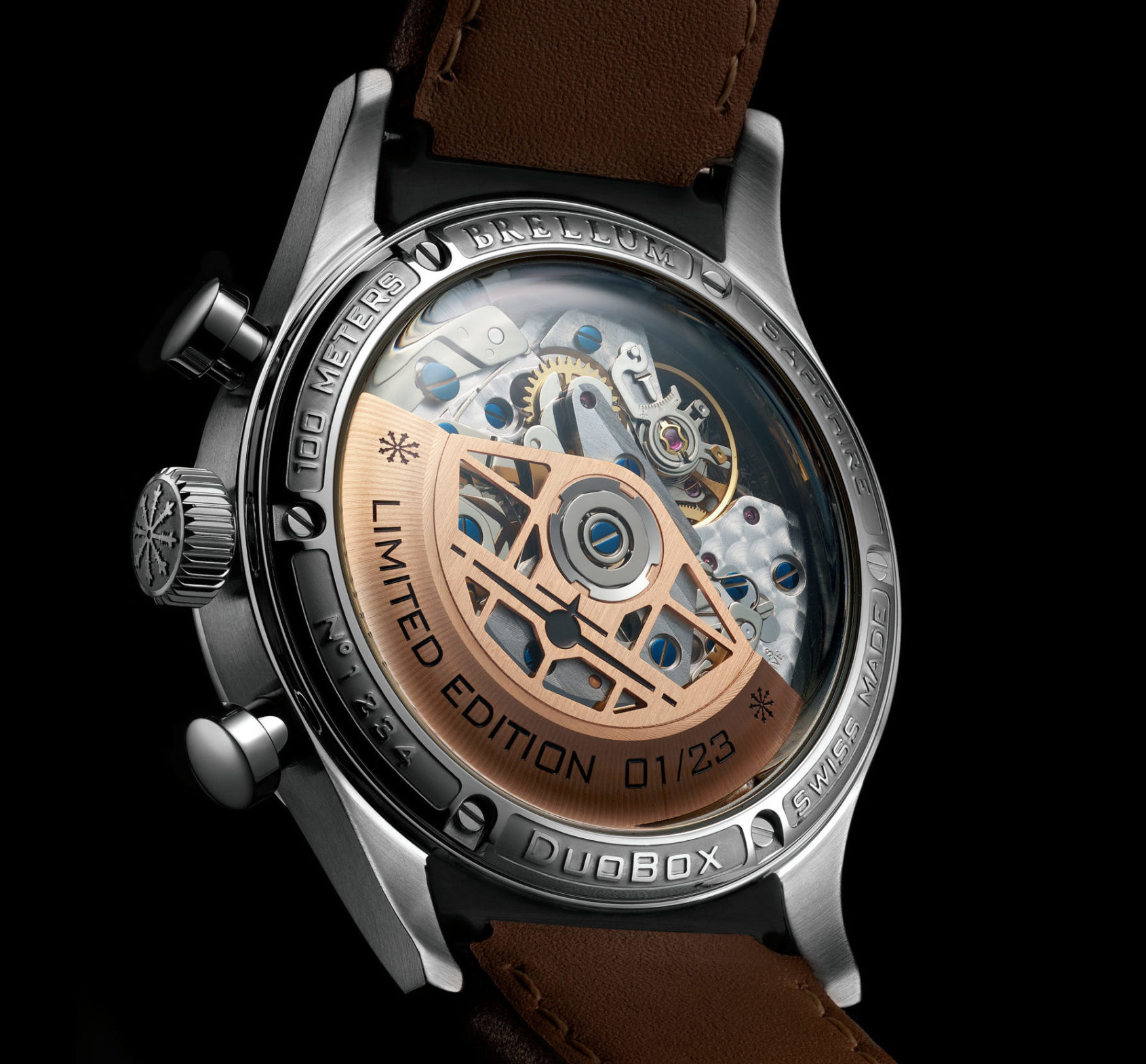 The Brellum BR-750-PR movement is a regular feature in Brellum’s lineup, based on the evergreen Valjoux 7750. The movement is visible through the screw-on sapphire caseback, which carries some of the specs around its perimeter. Like all Brellum watches, it’s COSC-certified and extensively decorated — note the aeroplane relief in the semi-skeletonised rotor which also notes the number in the limited run. In terms of performance, it offers a 46-hour power reserve and some anti-magnetic features, owing to the use of a Nivarox hairspring.