Brands have always taken plentiful inspiration from their back catalogue – just look at some of the biggest recent releases. There are two ways to go about this. You either take subtle cues from a past model (think TAG Heuer Orange Diver in reference to ref. 844), or you go the way of the Rado Captain Cook Over-Pole. I had the recent pleasure of spending a couple of hours with this new watch at a Rado event, and though my time with it was short, I was certainly impressed. Rather than simply using the name in a distinctly different product, the brand revived the imperfect charm that so many vintage pieces carry. Allow me to explain.

As pretty as a picture 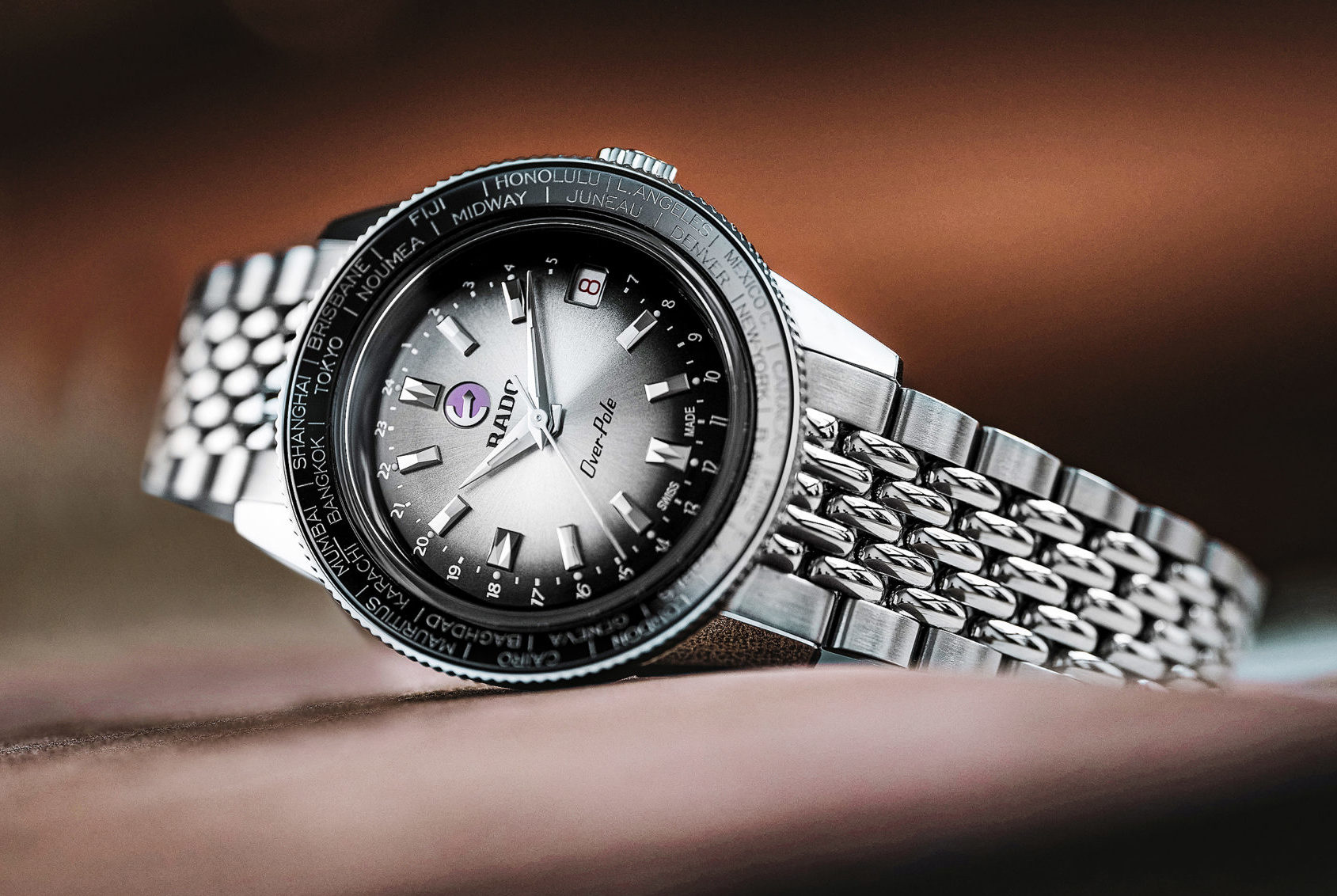 Before the regular shtick of polished this, applied that, just look at it. It’s absolutely gorgeous. The way those indices contrast against a silver-black fumé backdrop is fantastic, as is the detail in the indices themselves. If you look closely, you’ll note a diamond-shaped cut-out in the 6, 9 and 12 o’clock markers, while the others cinch to a subtle hourglass shape. The dauphine hands are just as reflective, which admittedly does sacrifice some legibility, as the domed shape of the dial reflects a lot of light as well. 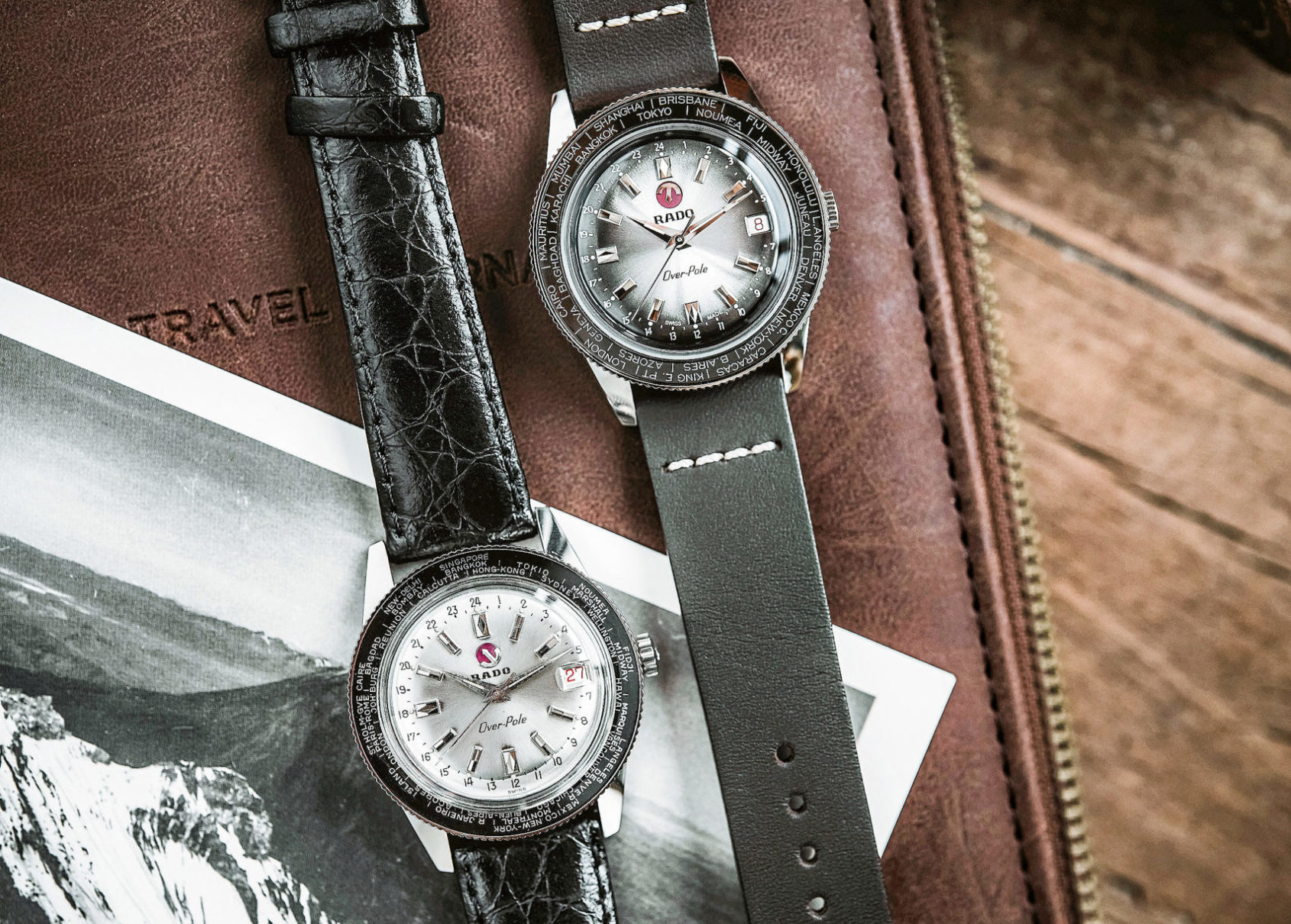 Comparing it to the original, the lineage is clear. The script-like printing of the 24-hour markings beyond the applied indices and of the Over-Pole name appears on both models. The red date wheel text re-appears as well, matched by the backdrop of the oscillating Rado anchor. As far as modern upgrades go, the new Over-Pole gets a brilliant box-domed sapphire crystal, which offers as close of an experience to the cromulent distortions of a plastic crystal, but with much improved scratch resistance. A notable absence on the crystal is a cyclops, though I’m personally indifferent about its exclusion.

Want wearability? You got it. 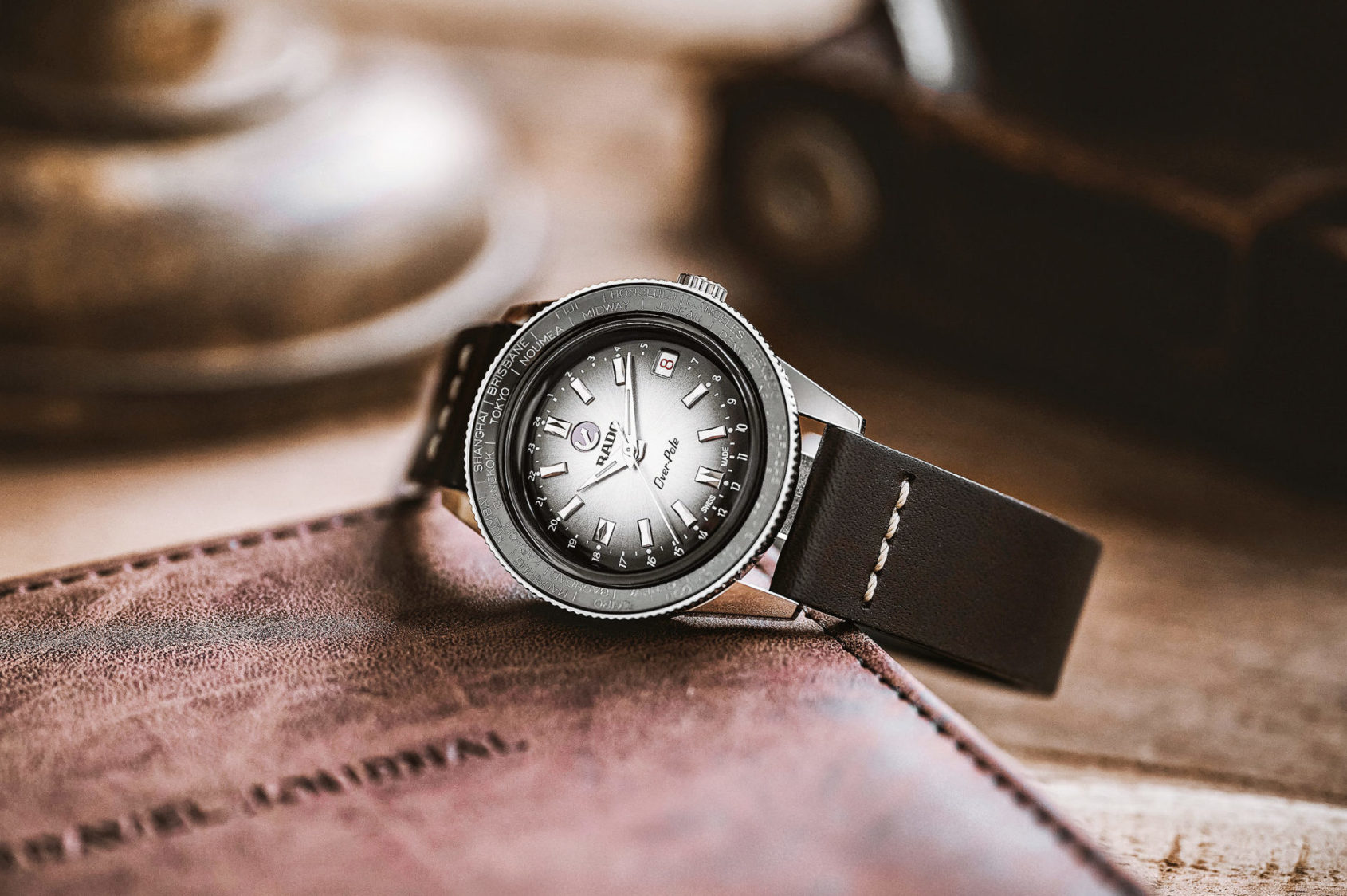 While plenty of vintage reissues go toe-to-toe in terms of looks, their modern souls are betrayed by how they feel on wrist. Once again, I’d love to be able to speak of long-term wearability (hint, hint, Rado), but the moment I tried it on at the event, I knew they got it right. If you’ve ever had the pleasure of owning a vintage watch, you might be catching on to what I mean. They just feel right. Somewhat broken in, even more obviously so when paired with a well-articulating jangly bracelet. This kind of feel is something you’ll surely develop with other new watches, but the fact that the Over-Pole gave me that feeling brand new stunned me. 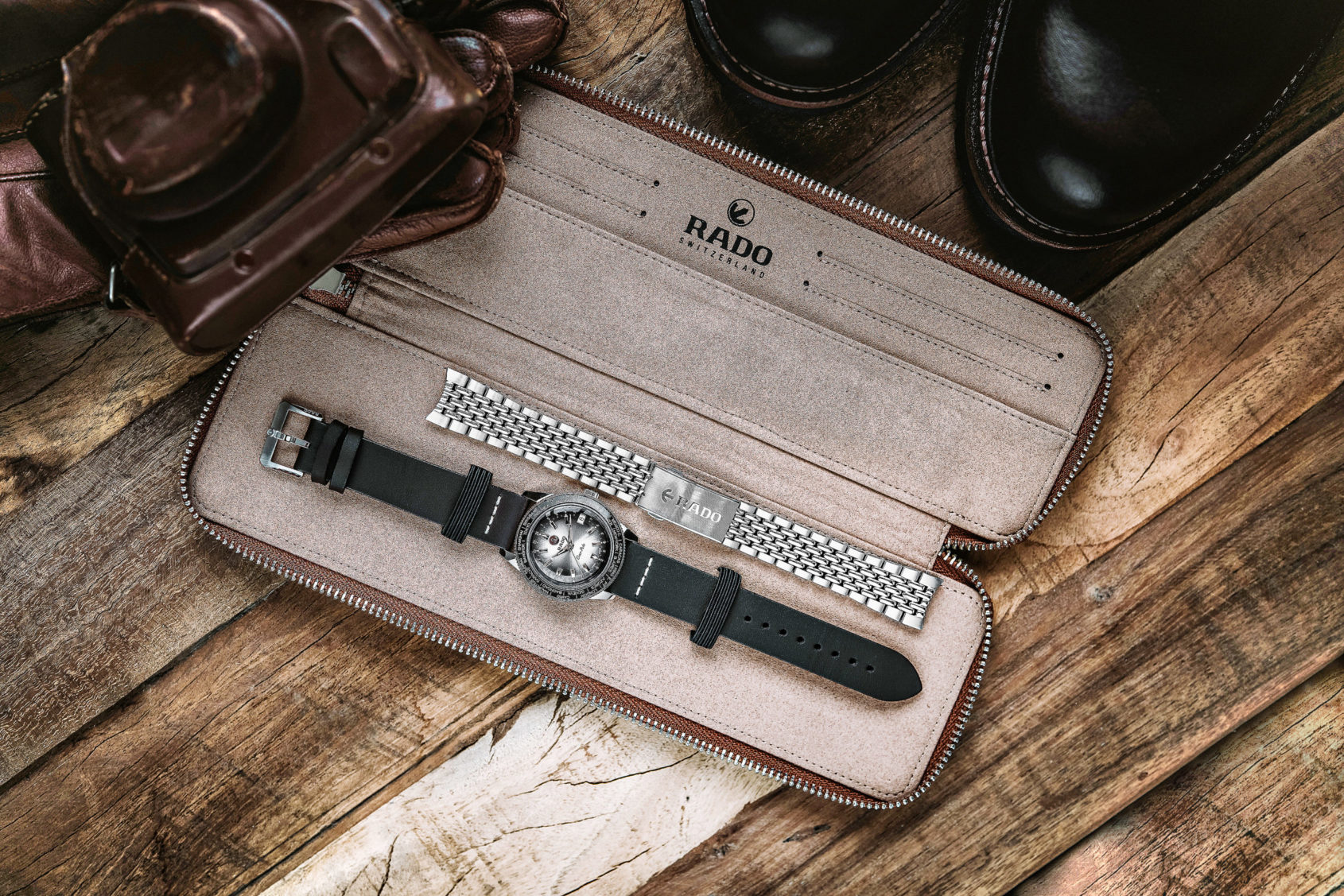 As far as the raw specifications go, it’s no wonder the Over-Pole is so wonderful on-wrist. The 37mm diameter is paired with a 43.1mm lug-to-lug, and the thickness is kept down to 10.3mm due to a manually-wound movement. The multi-city bezel is almost as busy as the one on the original, though simplified slightly, with only two rows for the cities. Rendered in Rado’s high-tech ceramic, it’s the most obvious modern upgrade, and one that makes total sense considering Rado’s “Master of Materials” moniker.

The watch is delivered with two straps – mounted on a quick-release brown leather paired with a beads-of-rice stainless steel bracelet. The bracelet adds substantial heft, though I see some wanting a bit of extra weight due to the Over-Pole’s small dimensions. The Over-Pole is powered by the Rado calibre R862, a manually-wound movement with an 80-hour power reserve. Based on the ETA 2804-2, the manually-wound sibling to the 2824, it’s helped by a slowed-down beat rate to almost double its power reserve, a really handy inclusion considering it’s not an automatic movement.

It’s quite handsome, with machine-applied Geneva striping and blue screws. Being an uncommon manually wound derivation of the Powermatic 80, I’d love to see it upgraded with a silicon balance spring, as it would help it compete much better in its price range. 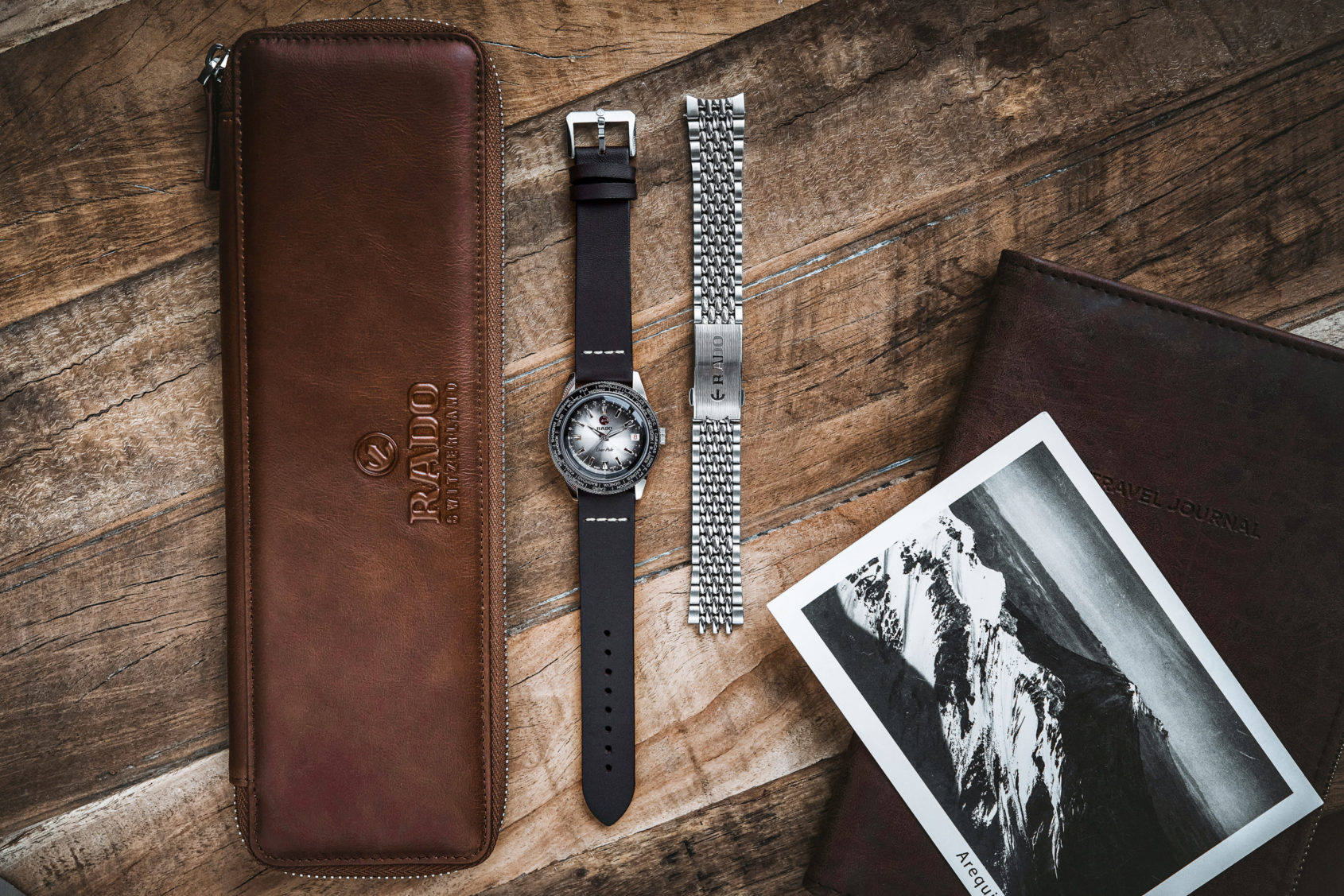 The Rado Captain Cook Over-Pole is a limited edition of 1962 pieces, and is available now. Price: A$3,850