MICRO MONDAYS: The Phantasos Triclops is that rarest of things – a truly original watch

EDITOR’S NOTE:  We have been advised by readers that this watch has allegedly not been sent to consumers despite repeated promises.  We have contracted the brand ourselves and not received a response. We suggest readers be very wary about proceeding to buy these watches.

Let me guess, you see a Submariner and you yawn. Time and time again the same handful of watches get recycled, tweaked, homaged and reissued, but for a real fan of design, sometimes “heritage” just doesn’t cut it. Yes, those classic designs are classic for a reason, but if you’re hankering for something completely fresh, Phantasos are here with the Triclops to answer your prayers. 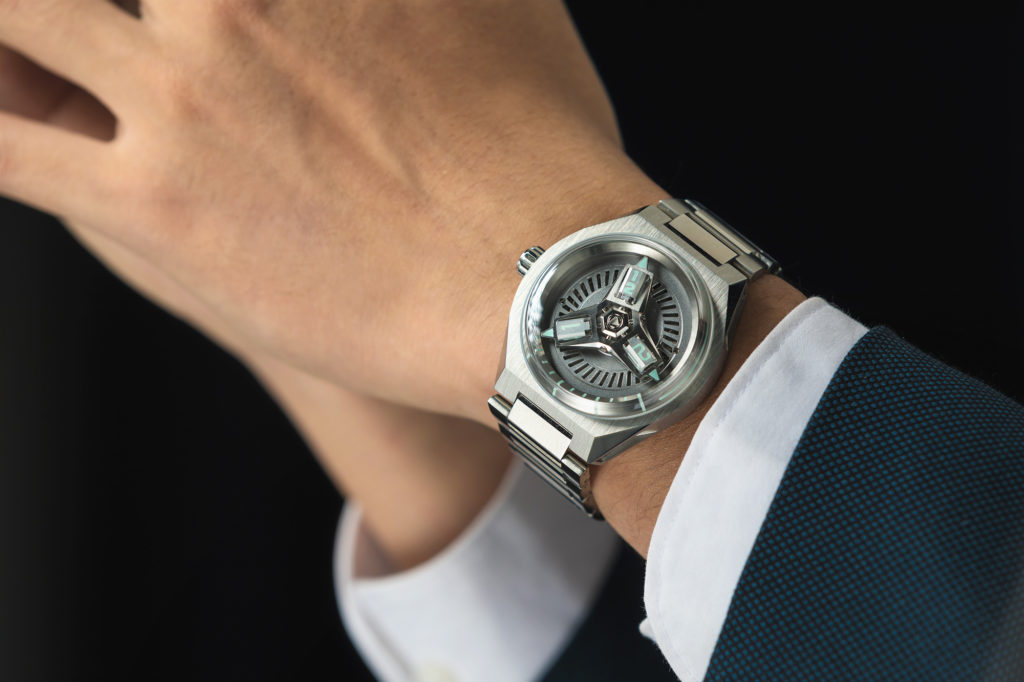 The Triclops, like all great Kickstarter watches, is packed with ingenuity and originality. During my research for this article, I made a search for “wandering hour watch” and the first result was an Audemars Piguet listed for $73,800  AUD. Well, cutting right to the chase, the Triclops costs just $980 USD at retail or $648 USD for the limited early-bird special on Kickstarter. And while I’d never presume to knock the technical ability of a brand such as AP, the “hourlisk” system that Phantasos have adopted for this complication looks much more daring and magical than the sapphire disc solution that most other wandering hour watches use. 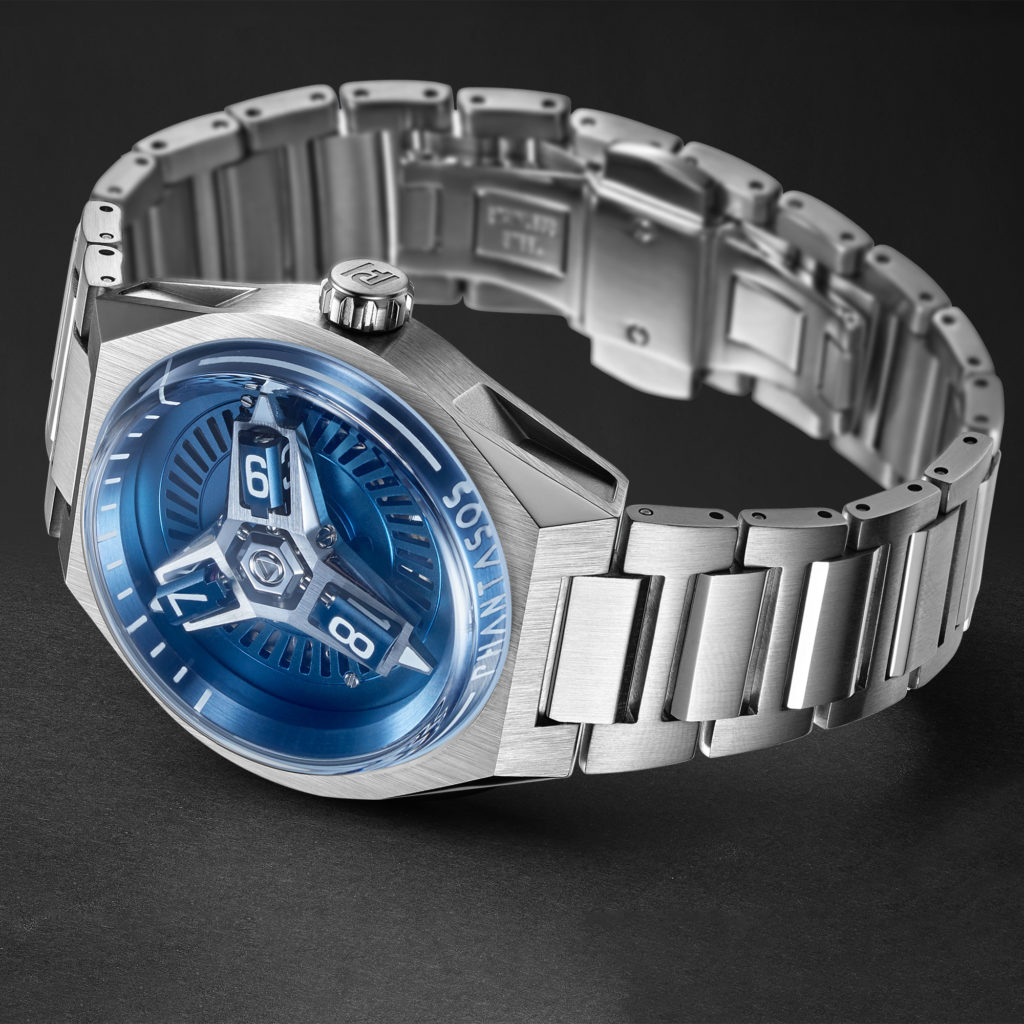 The most important thing to know about the Triclops is of course, how to read it. It seems like a sparse piece of alien equipment at first glance, but it’s actually quite simple. The top section of the Triclops’ bezel is divided into quarters, with each marker indicating five minutes. As the three-armed “hand” spins clockwise at the same rate as a minute hand would, the rectangular prisms with the hour markings approach the minute scale from the left. When the hourlisk reaches the scale, for example displaying the number three, then you’ll know it’s three o’clock. With the three pointing directly up, that will be 3:30. When the three hits the final marker on the scale, you will notice the four beginning its journey on the opposite side. If you look closely, you’ll notice that once an hourlisk passes by the Phantasos logo at the bottom of the bezel, it will begin to rotate so that it shows the correct hour. 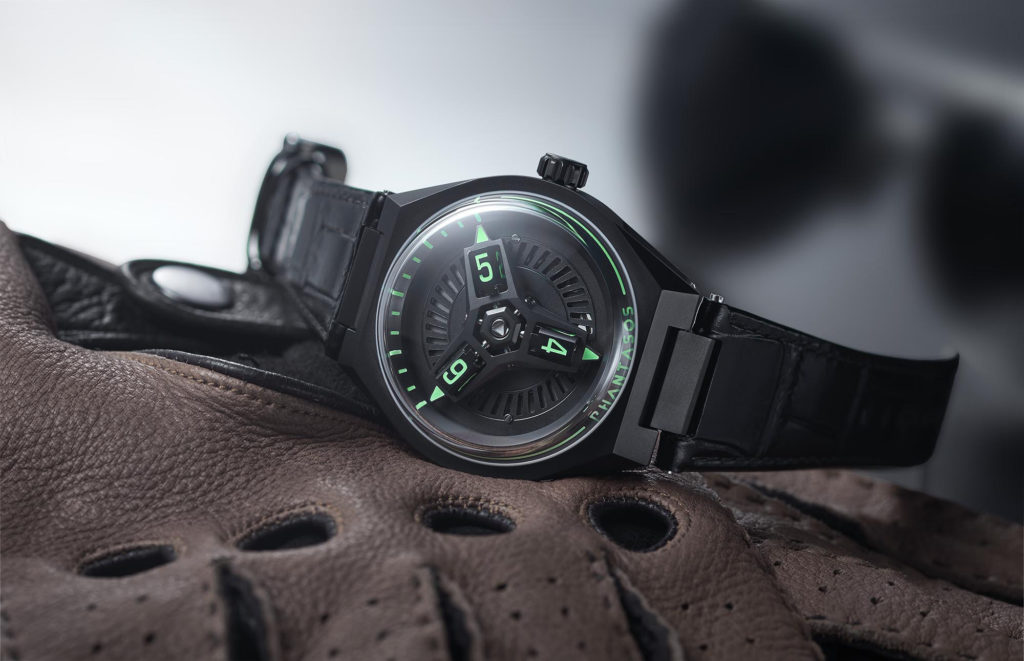 The Phantasos Triclops is powered by the humble Miyota 90S5, an automatic Japanese movement with a beat rate of 28,800vph, 42 hours of power reserve, and a stated accuracy tolerance of -10/+30 seconds per day. That such an off-the-shelf movement has been transformed in this way is truly mind-boggling, and though there are a lot of microbrands using odd movements in interesting ways, this one really seems to be the most unique. Phantasos developed a module which is capable of using the 90S5 to work its three-arm wandering hour complication without affecting the timekeeping performance, and although the exploded-view diagram shows that it looks relatively simple, I don’t think I really want to know exactly how it works. The eerie and cryptic nature of this watch is one of its most fun features, and the fact that it doesn’t reveal its secrets too easily makes it all the more plausible that you could find this on a crashed alien spaceship. 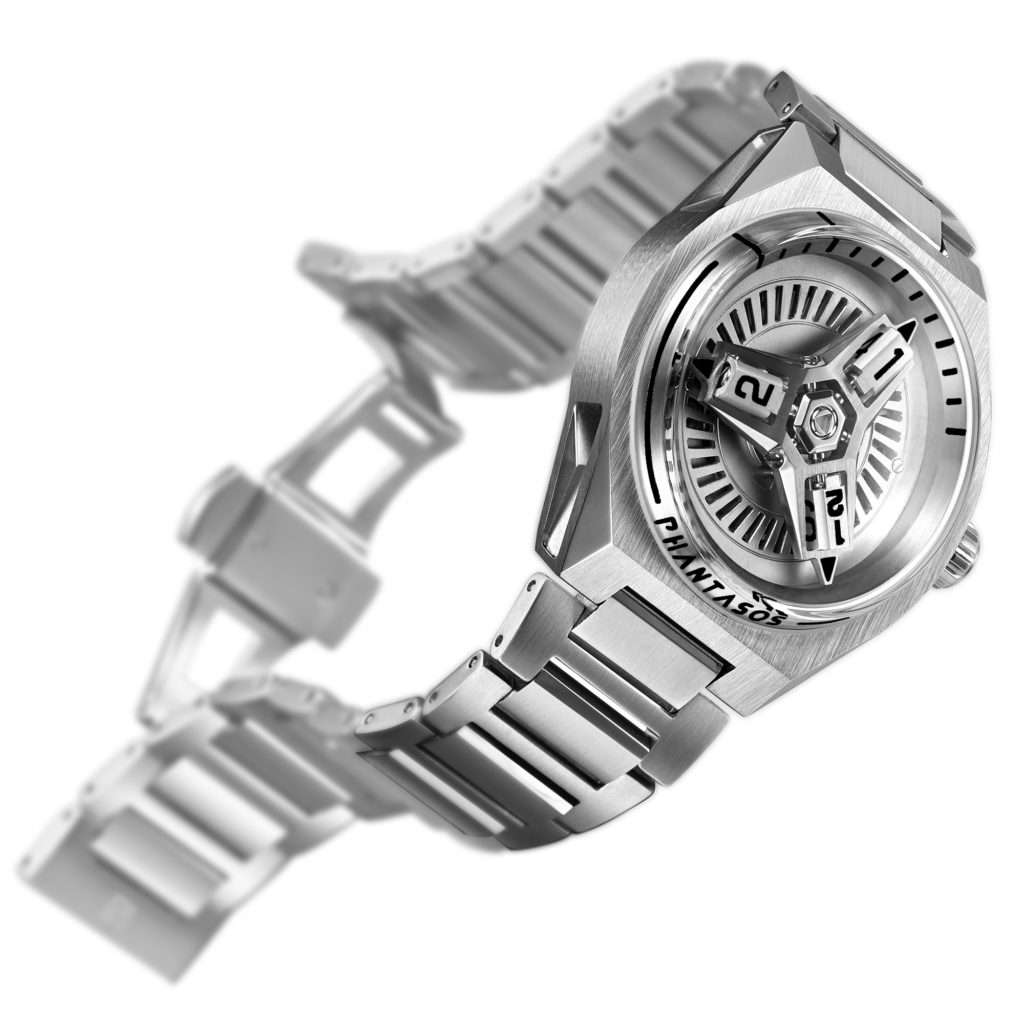 The rest of the watch certainly doesn’t shy away from the sci-fi style cues, between the radial air-vent design on the dial which lets you peek at the movement, and the critical dial information that’s pumped full of Super-LumiNova for after-dark legibility and neon-blue or green hues. The shape of the case is very reminiscent of some retro 1980s designs, although the quick-release spring bars mean you can swap the strap out for the optional steel bracelet and get that integrated-bracelet look that’s come back into fashion with a vengeance. 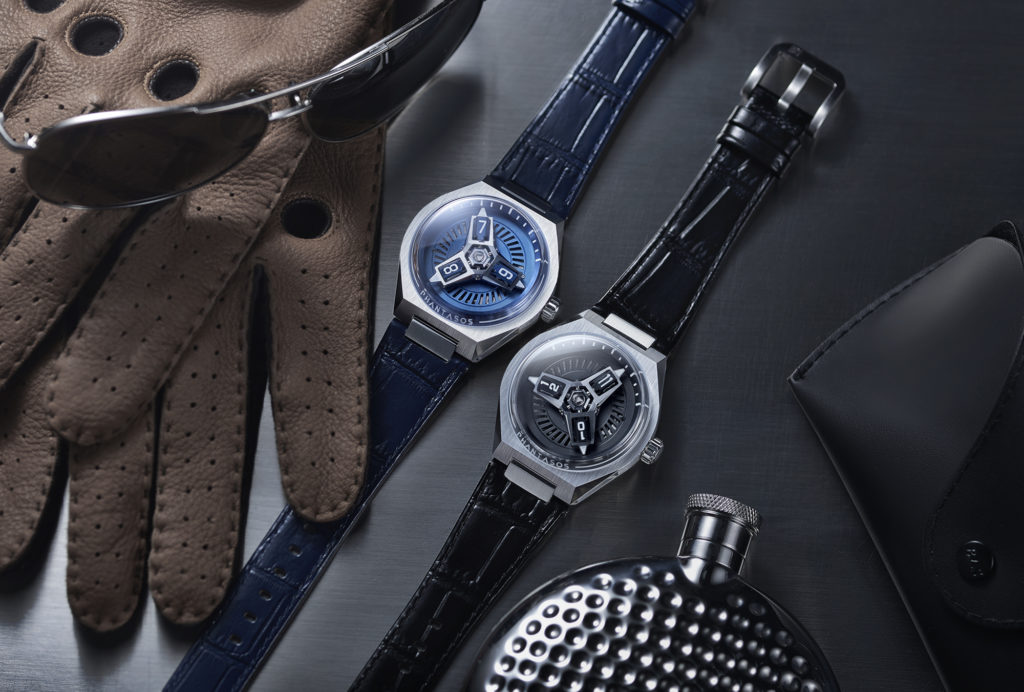 There are five variations available, which traverse a few different styles. The first is nicknamed the “Nightwalker”, with a black DLC coating, black dial, and green markings that fully commits to the outer-space aesthetic. The “Viridian” uses the same bright slime-green markings, although this time on a more conventionally-finished steel case, and the “Steel” is the same albeit with black paint. The “Pitch Black” is ironically brighter than the “Nightwalker”, using a black dial with white markers and the silvery-steel case, but the most popular option would surely be the “Royal Blue”. That variant uses a navy blue dial and matching hourlisks that somehow balances out the wackier elements to make it look like a regular sports watch at first glance, but gifting you with its unique flavour once you take a few seconds to delve deeper. 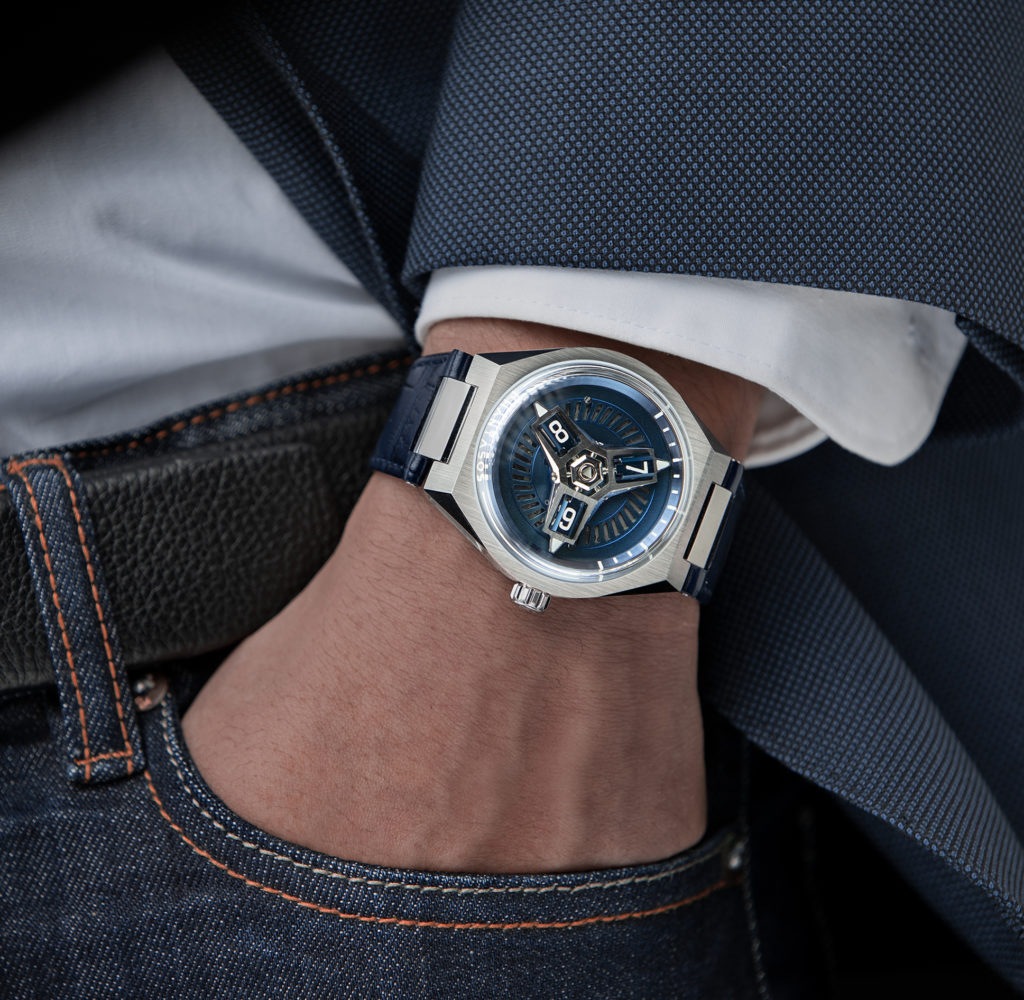 Each variation of the Phantasos Triclops is limited to 500 pieces, and many have already been snapped up. If you’re entranced by it, make sure to visit the Kickstarter page – they’ve already raised an impressive these guys have raised in excess of $362,000 AUD – and keep an eye out for any future Phantasos releases.

The Phantasos Triclops pricing and availability:

The Phantasos Triclops is limited to 500 pieces per model and costs $980 USD at retail or $648 USD as an earlybird special.

EDITOR’S NOTE:  We have been advised by readers that this watch has allegedly not been sent to consumers despite repeated promises.  We have contracted the brand ourselves and not received a response. We suggest readers be very wary about proceeding to buy these watches.