Editor’s note: OK, I’m not sure how many sides of the moon actually exist but, according to Omega and their collection of “… Side Of The Moon” special edition Speedmasters, it’s several.

And while all the iterations of these Speedmasters are very fetching-looking timepieces, this example, the Omega Co‑Axial Master Chronometer Moonphase Chronograph — Blue Side Of The Moon, has got to be in the discussion as one of the best models so far.

For a start, and unlike other models in the range, it’s equipped with Omega’s staggering Calibre 9904, which offers a great deal of features including METAS-approved Master Chronometer Certification, magnetic resistance rated up to 15,000 gauss, chronograph complication, date complication, moonphase complication and 60 hours of power reserve.

What’s more, the 44.25mm case is hewn from blue ceramic and also utilises Omega’s Liquidmetal bezel, which benefits from a traditional tachymeter display. And the Blue Side Of The Moon sports sapphire crystal on both the front and back of the case, which is then treated to an anti-reflective coating.

It’s a truly impressive timepiece that offers a hell of a lot for its $18,000 price tag, and our man Felix Scholz was lucky enough to go hands-on with the watch early last year.

Omega’s ceramic exploration of the Moonwatch has been underway for some time now, starting with the popular Dark Side of the Moon back in 2013. Since then, we’ve seen a bevy of monochromatic models, with numerous blacks on offer, as well as grey and white. 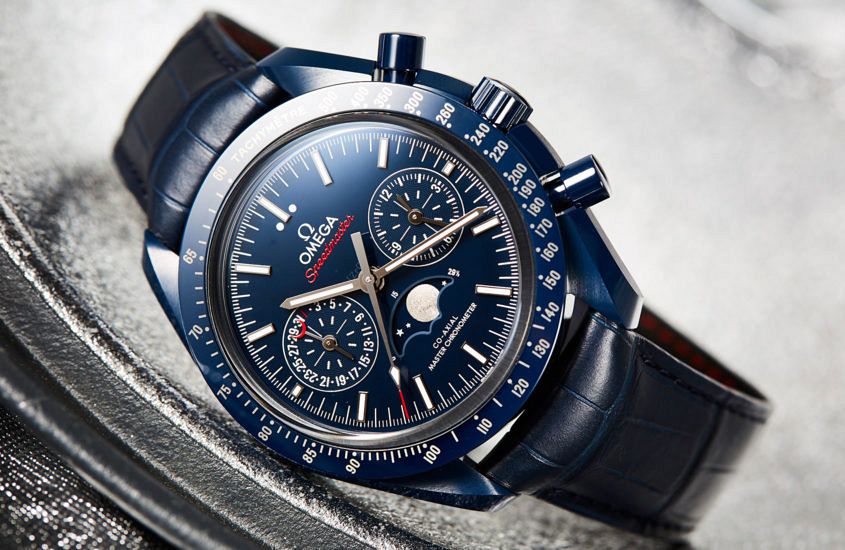 Last year, Omega flipped the program a little, adding colour – and additional complication – to the equation with the Speedmaster Co-Axial Master Chronometer Moonphase Chronograph … AKA the ‘Blue Side of the Moon’. The first Moonphase version of the Speedmaster, powered by the calibre 9904, was released in 2016, and we remarked at the time that it was a logical and clever take on the famous Moonwatch, and, a few years on, I still stand by that statement. 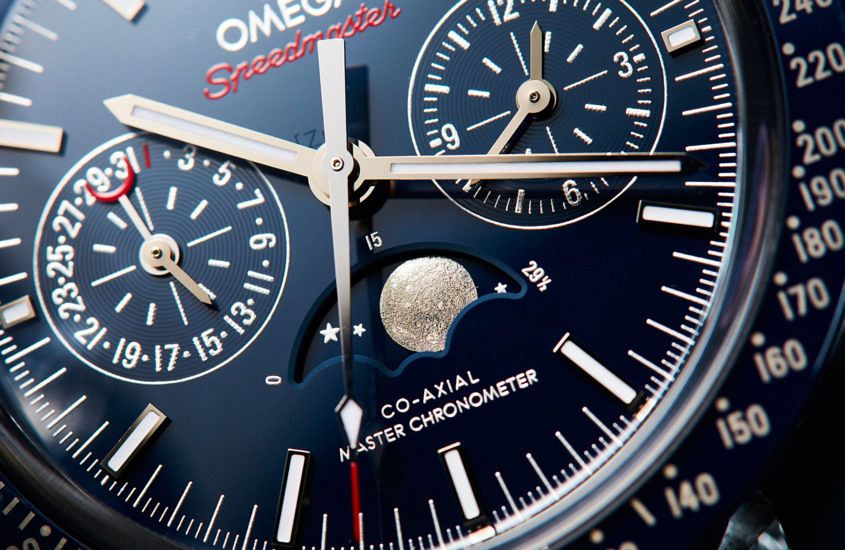 The blue ceramic, though, adds a whole new element to this watch. Previous monochrome ceramic iterations of the Speedmaster managed to somewhat slip under the radar (well, except for the white version). That is not an option for this 44.25mm blue number. While in certain light it does look quite dark, almost navy; when the light hits it, the watch becomes iridescent. It’s worth pointing out that all the details — pushers, crown and caseback — are ceramic. Even the clasp is ceramic-coated titanium. But not everything about this watch is blue. There are a few red highlights, but the main complementary option is silver; the tachymeter scale and the moon is done in Liquidmetal, and looks really strong against the blue. The moon, in particular, is a stunner, pitted with miniature craters, just like the real deal. 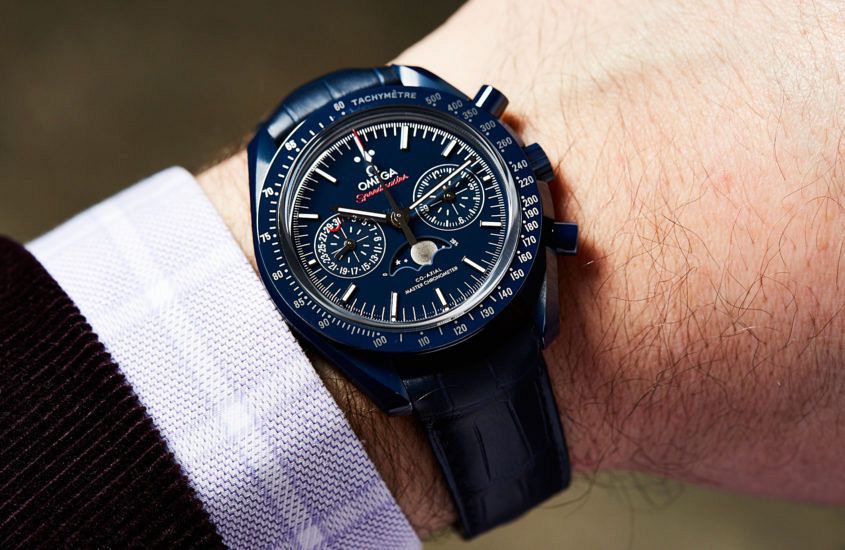 On the mechanical front, the BSOTM is as superlative as you’d expect; the calibre 9904 is a Master Chronometer, meaning it meets Omega’s class-leading quality standards in terms of accuracy and performance in real-world conditions. The only issue you might have from a functionality point of view is the stacked hour and date indicators in the sub-dial at nine. Good for balanced design, less ideal for legibility. 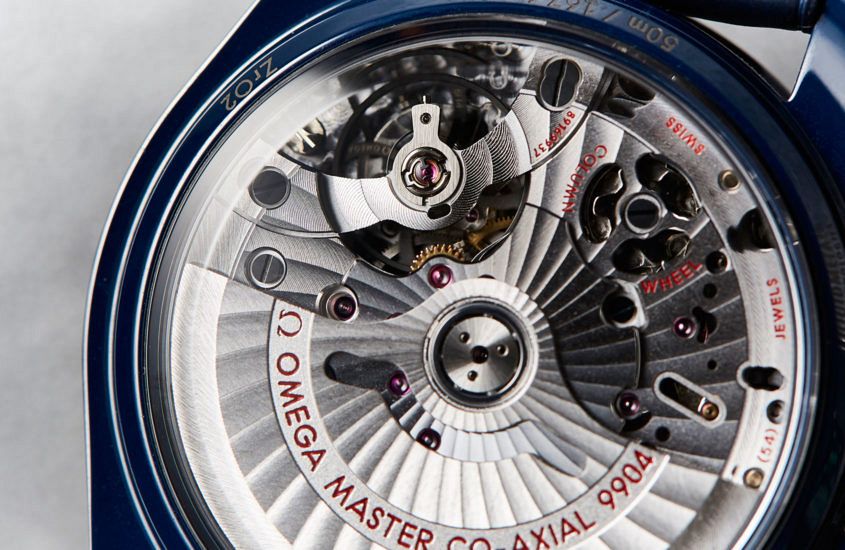 The Speedmaster has a reputation for being something of a conservative classic, even in its more colourful versions. The Blue Side of the Moon is a bold, colourful, fun and (dare I say it) flamboyant take on Omega’s icon. And regardless of whether or not you could handle such a big blue watch, you can’t deny that it’s cool. 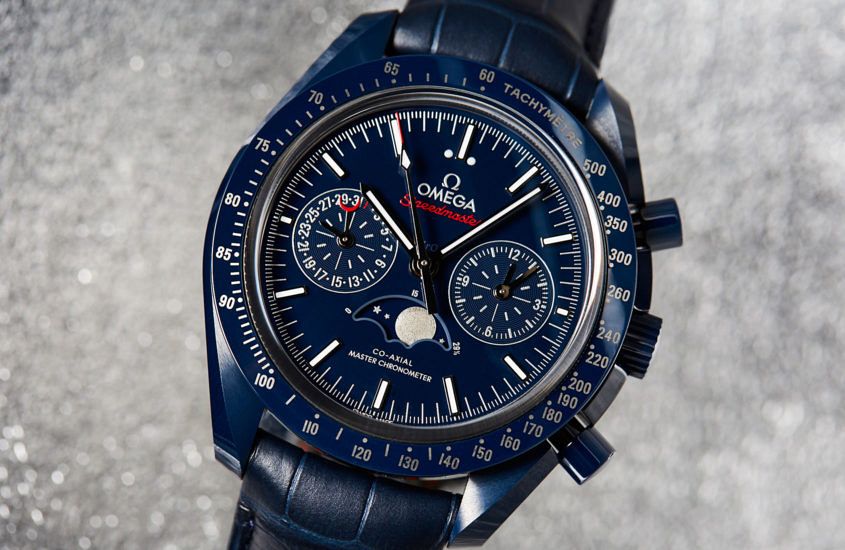