Editor’s note: The TAG Heuer Monaco Gulf 2018 Special Edition could very easily have been an over-the-top affair, but somehow, this big squarer watch with go-faster stripes manages to be much like its most famous wearer: cool.

The story in a second: Two stripes are all it takes to amp up the legacy and motorsports heritage of the Monaco. 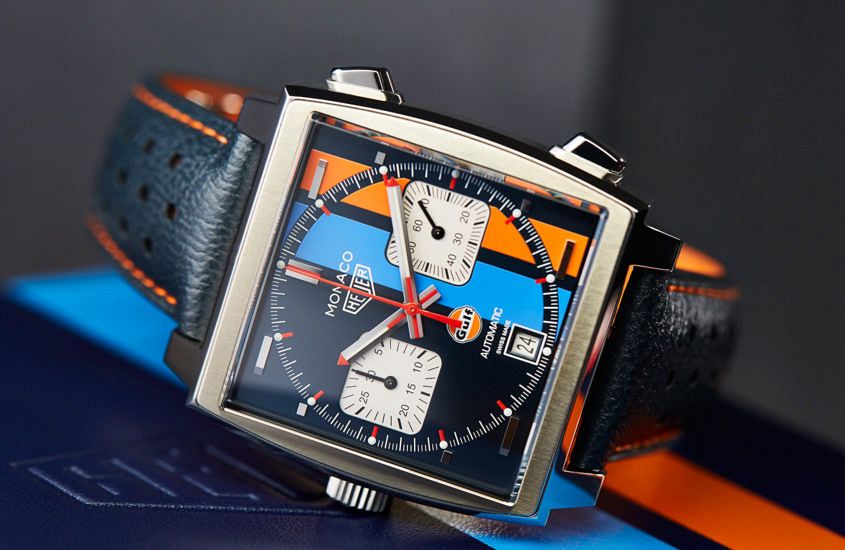 I’m willing to put the success of the Monaco down to two things: the Steve McQueen link, and the square shape. I’m sure there are numerous other factors, like the Calibre 11, at play. But really, it’s the fact that this watch is so distinctive, and was worn by someone so cool that the Monaco has stayed strong throughout the decades. The latest brightly striped Gulf Special Edition takes both these factors to the next level. 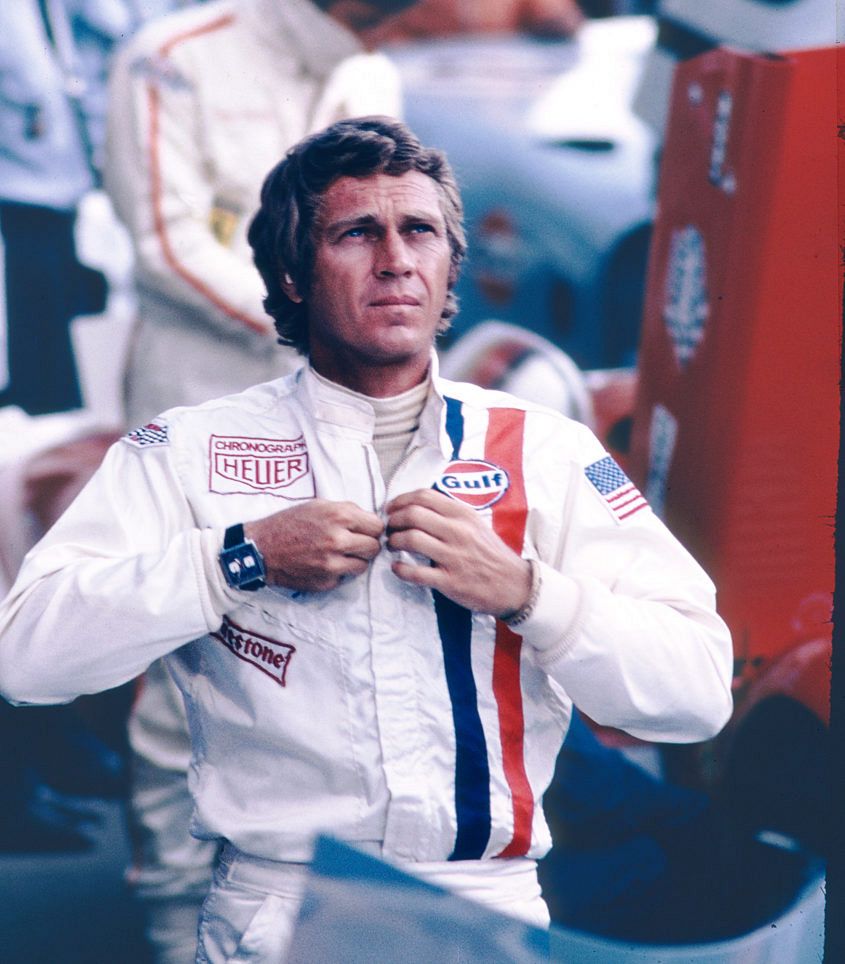 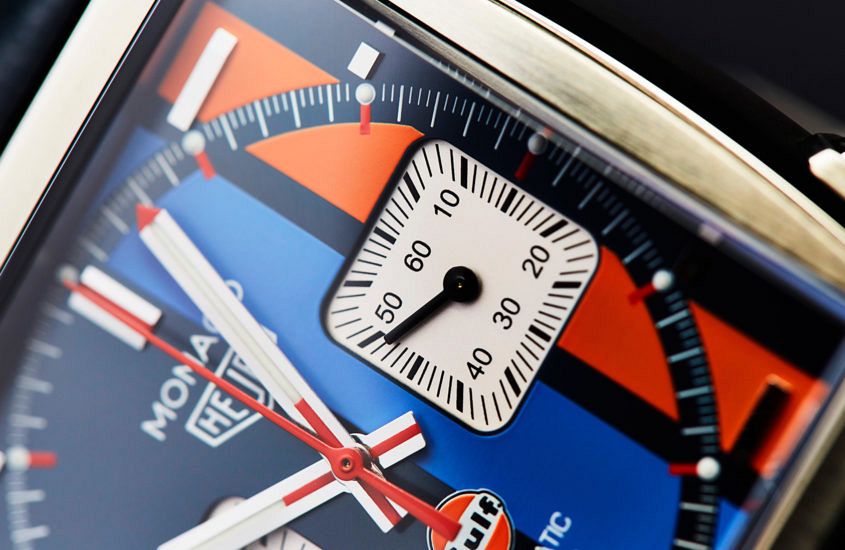 Typically with in-depth reviews, I start with the case, as it provides the foundational framework of the watch. But today I’m going with the dial, because this watch is all about the dial, and not just because of those stripes. The square Monaco dial is already pretty distinctive, due to its shape and those matching, rounded-off registers. This version takes as a base the blue starburst finish of the Cal. 12, and the dial layout (horizontal indices FTW) of the heritage, Heuer-only model. Of course you might not notice that the first few times you look at it, as overlaid on this is the blue and orange Gulf stripes, taking up the right hand half of the dial. You might imagine that these large matt blocks of colour ruin the pleasing symmetry and balance of the layout, but I didn’t find that to be the case — instead I thought they highlighted the design. But I’m happy to admit that’s a very subjective take. 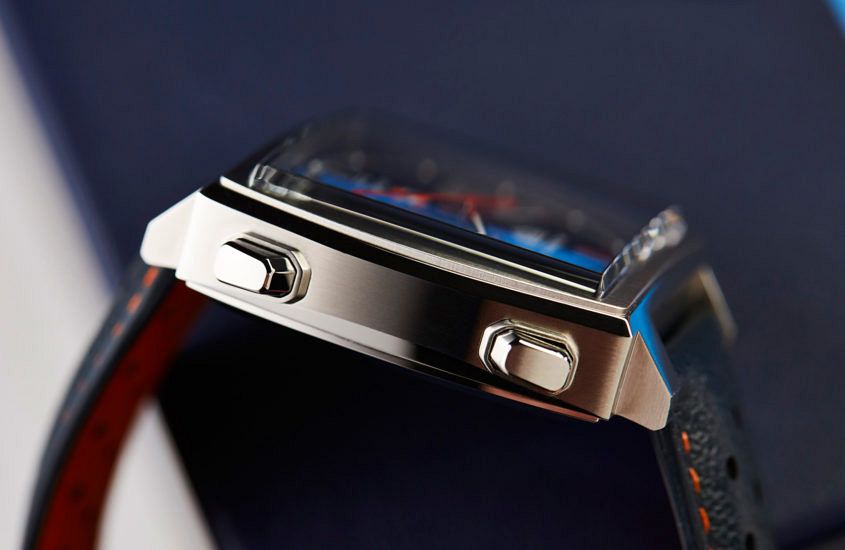 The case of the Monaco is very much a known quantity, but that doesn’t make it any less cool: 39mm by 39mm, with that incredible high box sapphire, sporty pushers on the right and winding crown on the left. This quirky-cool-classic case really sets the overall tone for the Monaco, and is largely responsible for its enduring popularity. 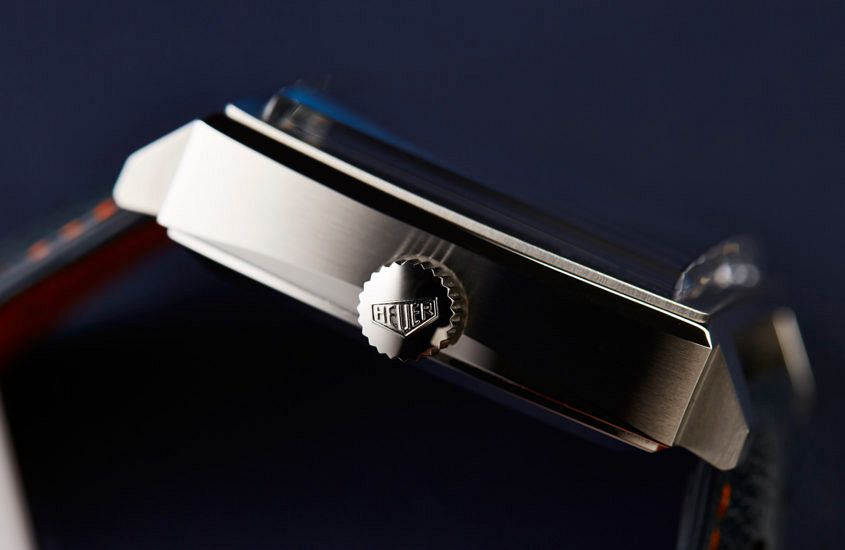 I am so glad TAG Heuer opted for the one, the only, the mighty Calibre 11 for this edition. It’s the definitive Monaco movement, and one of the all-time great chronographs (to find out why, read this). And while some may find the offside crown off-putting — I had to set and wind it upside down — it’s part and parcel of the Monaco story. Finishing wise, it’s in line with TAG’s other offerings; machine striping and perlage — attractive but not exceptional. Luckily, the pedigree more than makes up for it. 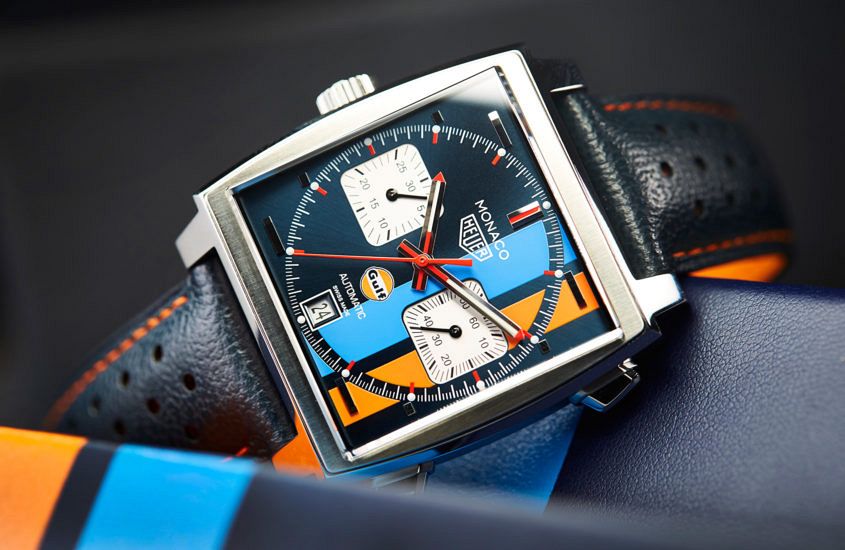 The leather strap is another solid win for the Monaco Gulf. TAG Heuer opted for a deep blue perforated calf, to match the dial base, highlighted with just the right shade of orange stitch and lining to help it live up to the dial. I would have been interested to see a gulf blue strap, but I suspect that might be a shade too outré, even for the extroverted types into this watch. 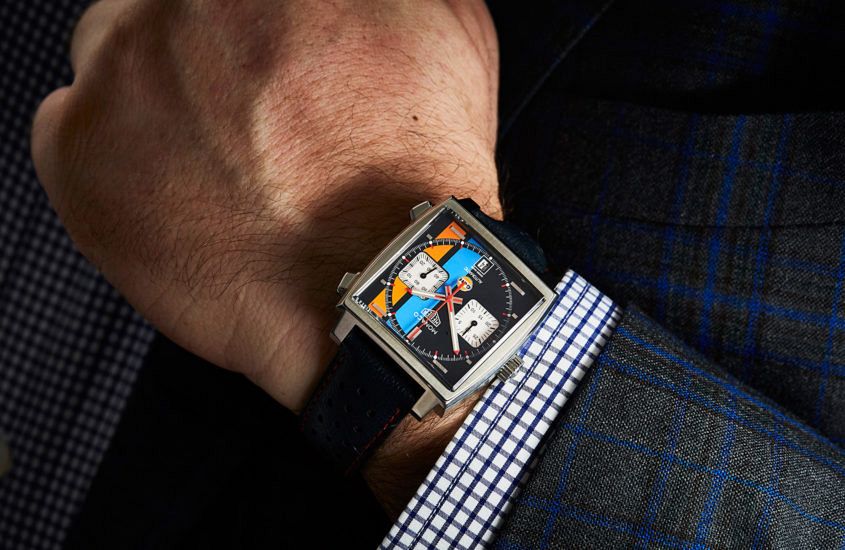 Looking at the pictures — be they stock press shots, or these very well lit, professional shots here — you expect the Monaco Gulf to be a super bold, bright watch on the wrist. But you know what? It’s far less in your face than you’d imagine. One hundred per cent wearable, and fun to boot. The size and shape of the Monaco makes it something of an acquired taste, but if you’re the sort of person who’s OK with that, then I don’t think the colourway will put you off. 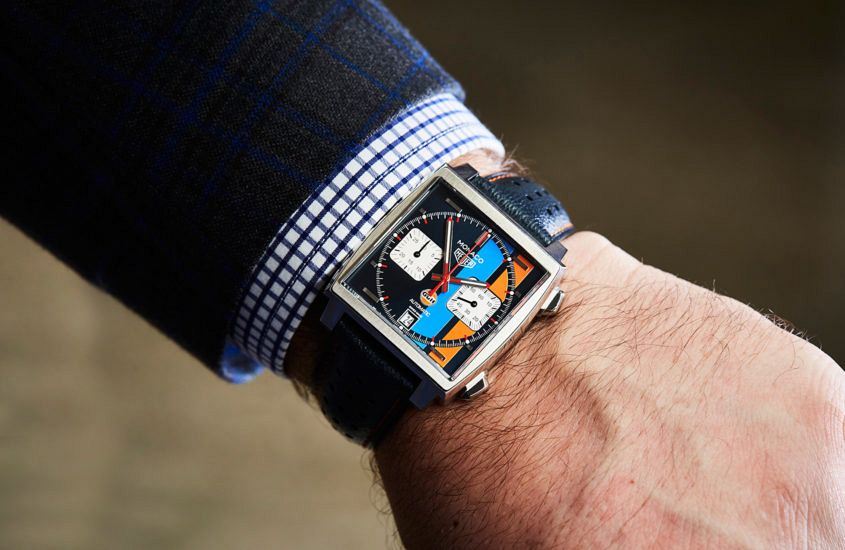 I was expecting this to be a much more polarising watch, but honestly, pretty much every person who saw and tried the watch on was positive. With the most common refrain being something along the lines of, ‘It’s not as bright as I thought’ and ‘It’s just a fun watch’. I think the latter is key to the charm of this watch. While it’s the McQueen link and heritage that will get you over the line, it’s the fun factor that will keep it on your wrist. 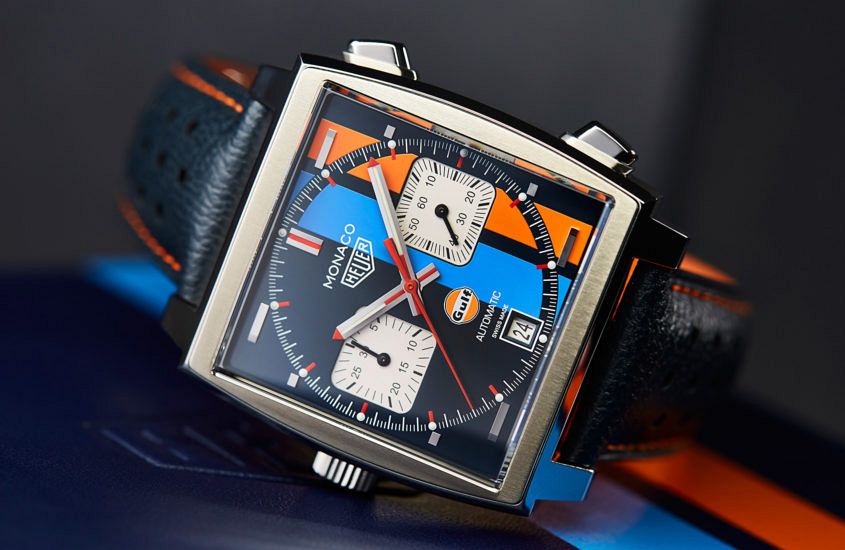 Remember that car in Le Mans …

McQueen fanatics, motorsports fans, Heuer lovers and people who just want a splash of colour on their wrist.

Not too much really, this is a pretty specific watch — it’s not trying to be all things to all people. Having said that, two things to consider: a solid case back and/or a super bold strap.